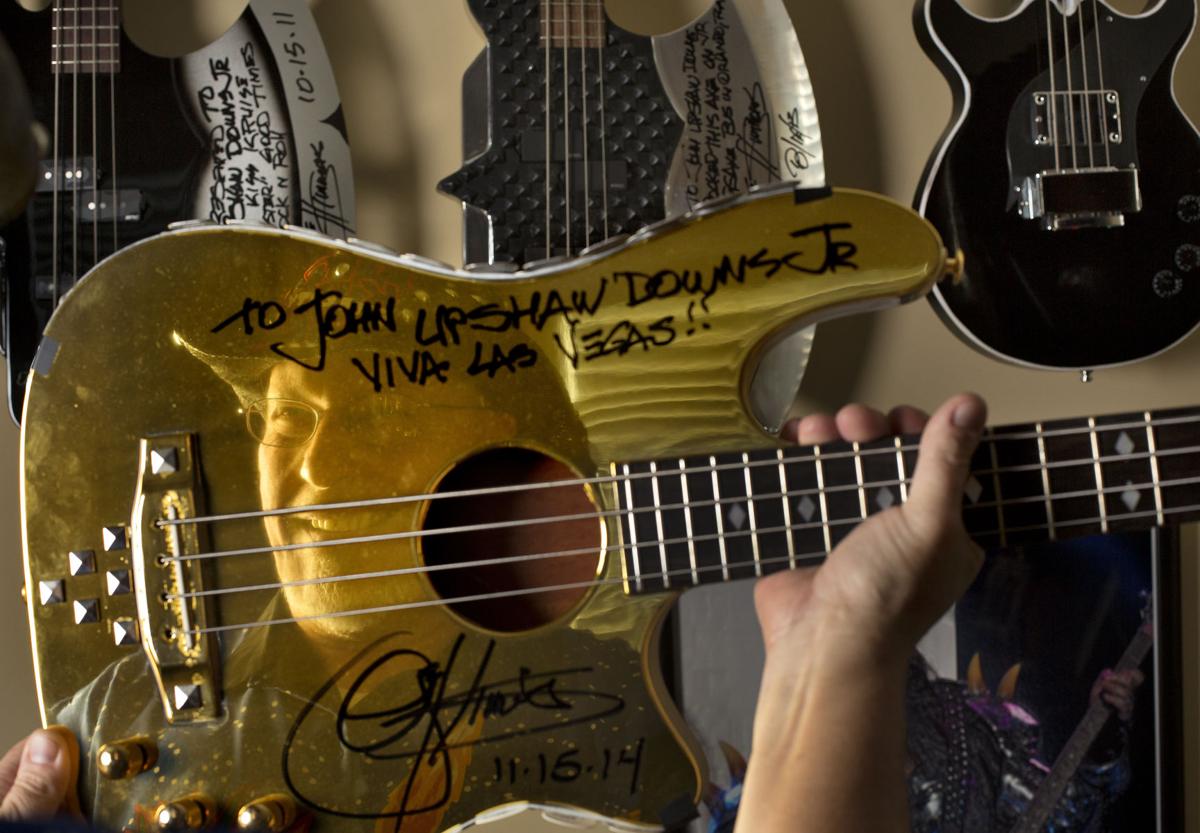 Kiss super fan John Downs is reflected on one of several guitars signed by Gene Simmons, including one he played in Las Vegas coated in gold lacquer. Grace Beahm Alford/Staff 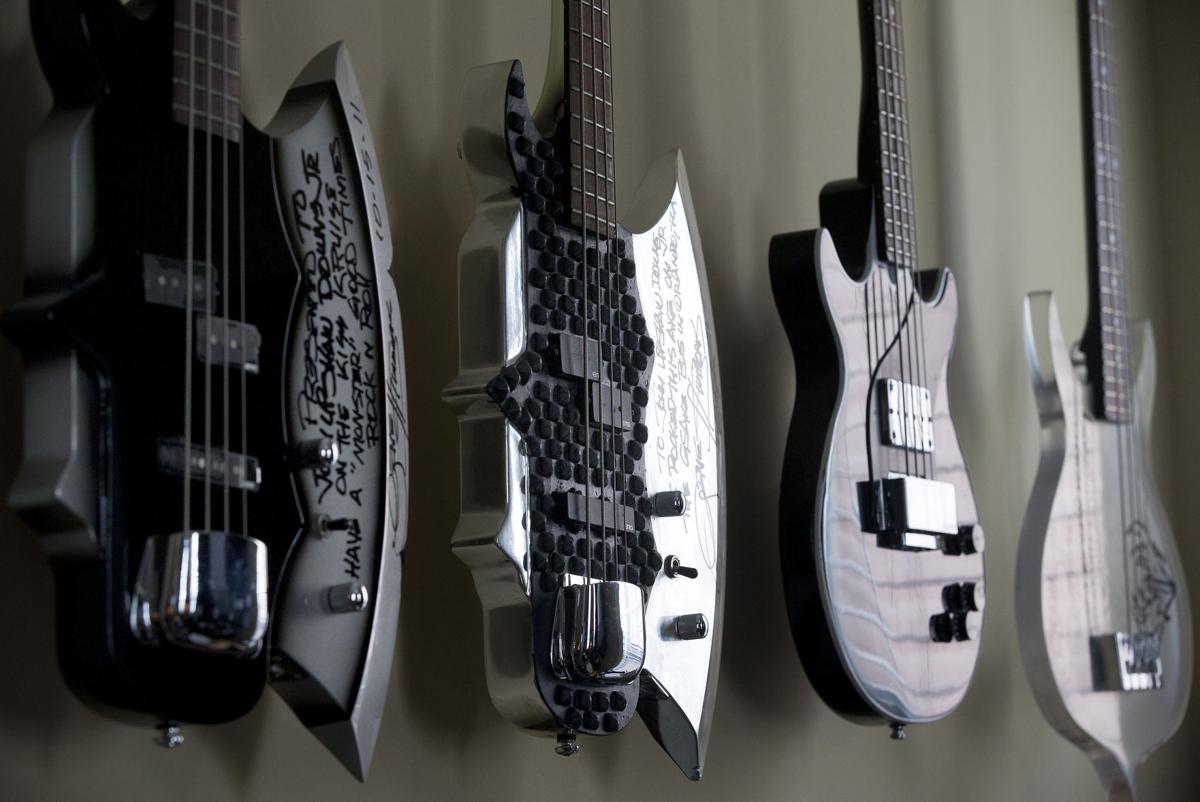 Some of the basses and guitars collected by Kiss fan John Downs at his home on James Island. Grace Beahm Alford/Staff 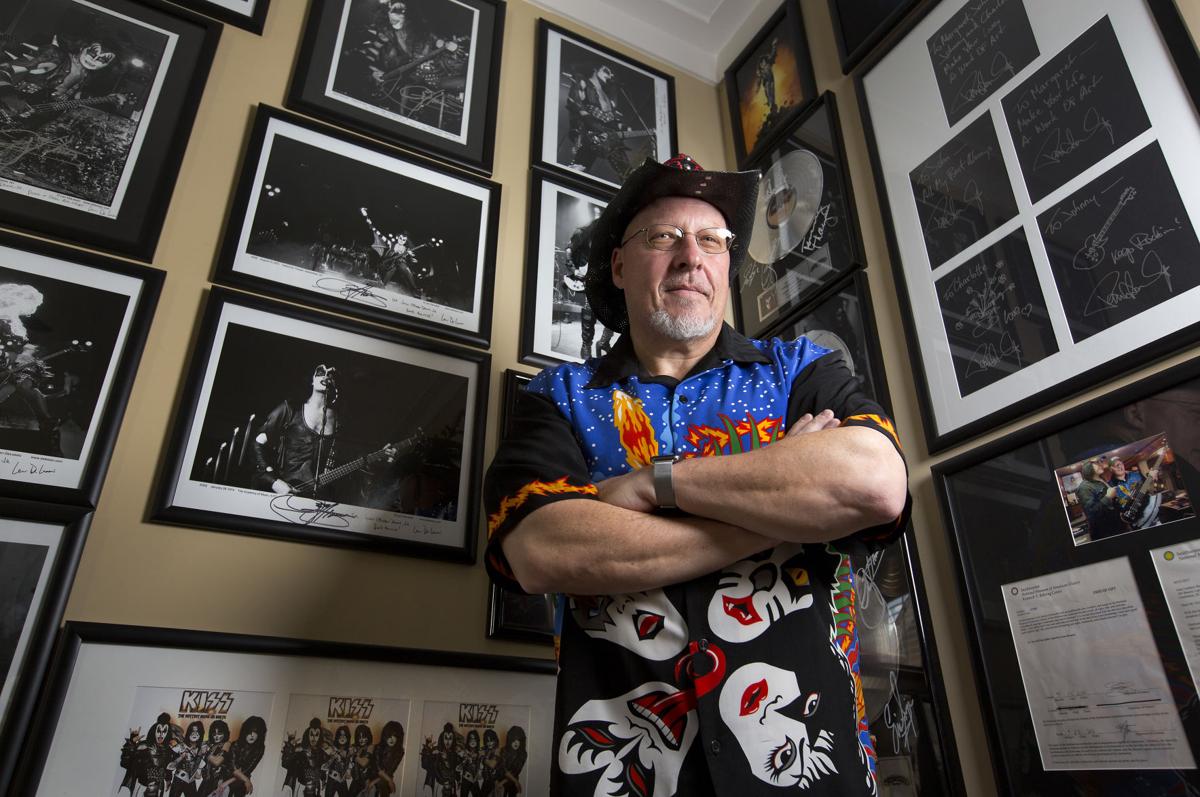 Downs has been following and collecting Kiss memorabilia since he was in high school. Grace Beahm Alford/Staff 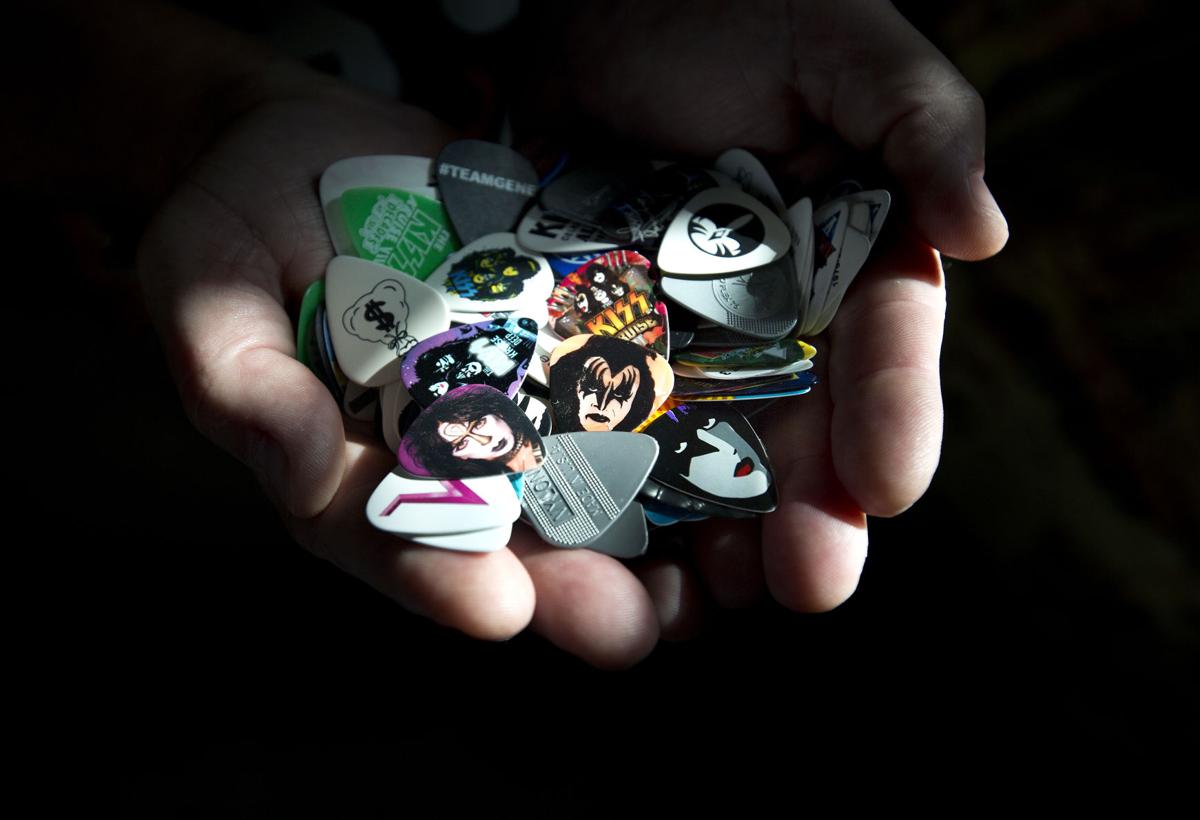 John Downs holds a fraction of the many guitar picks from Kiss band members that he has collected over the years. Grace Beahm Alford/Staff 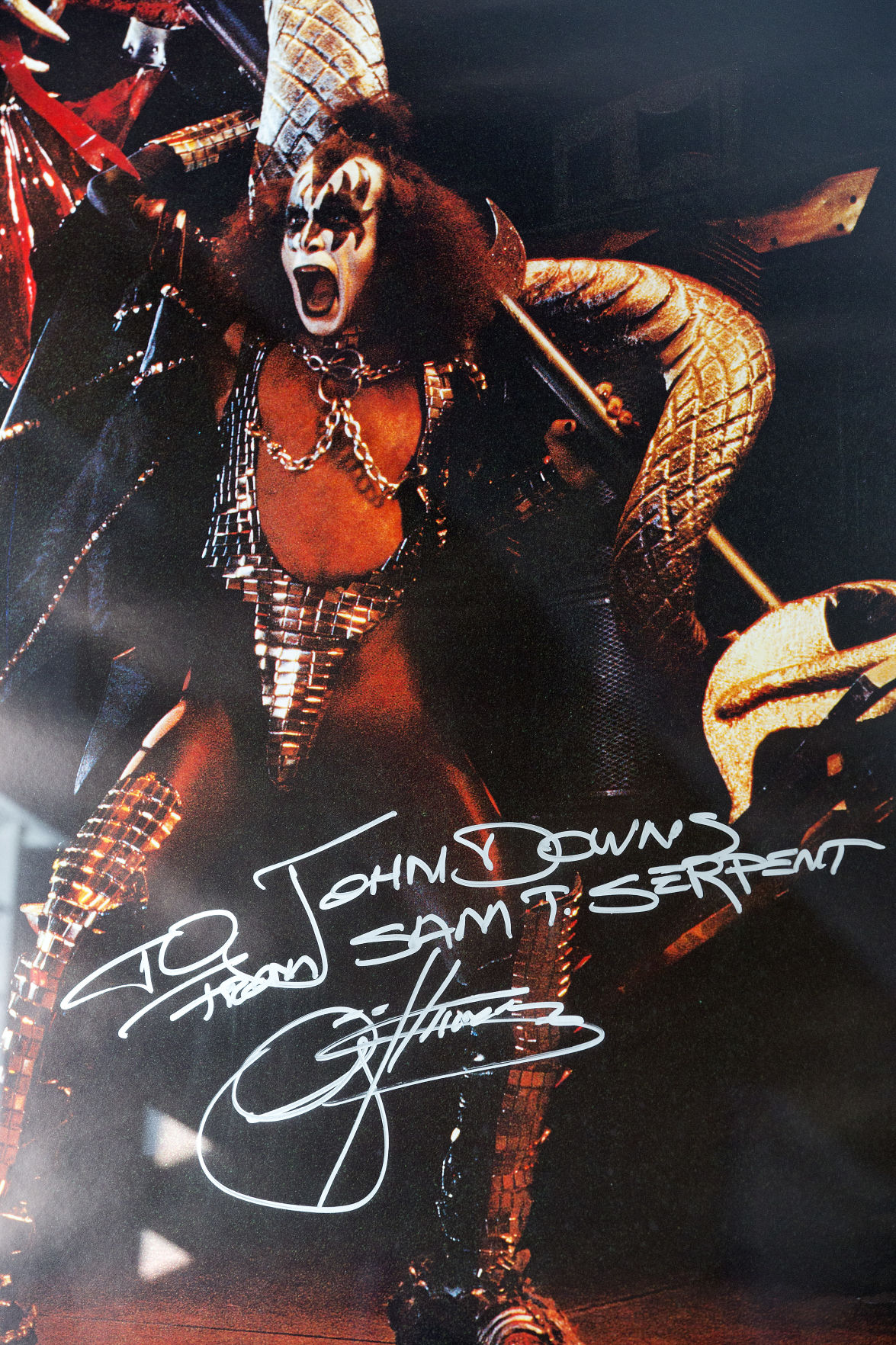 John Downs has his walls covered by memorabilia signed by Gene Simmons and other Kiss band members. Grace Beahm Alford/Staff 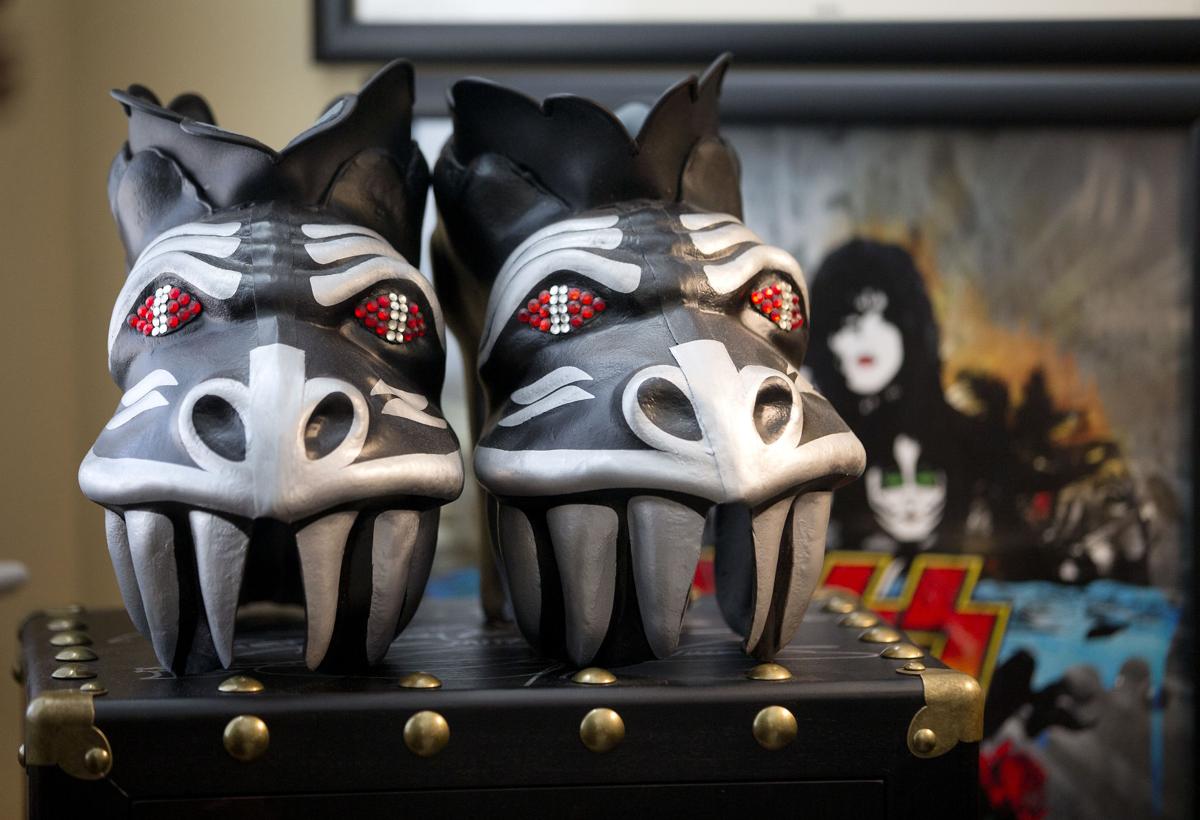 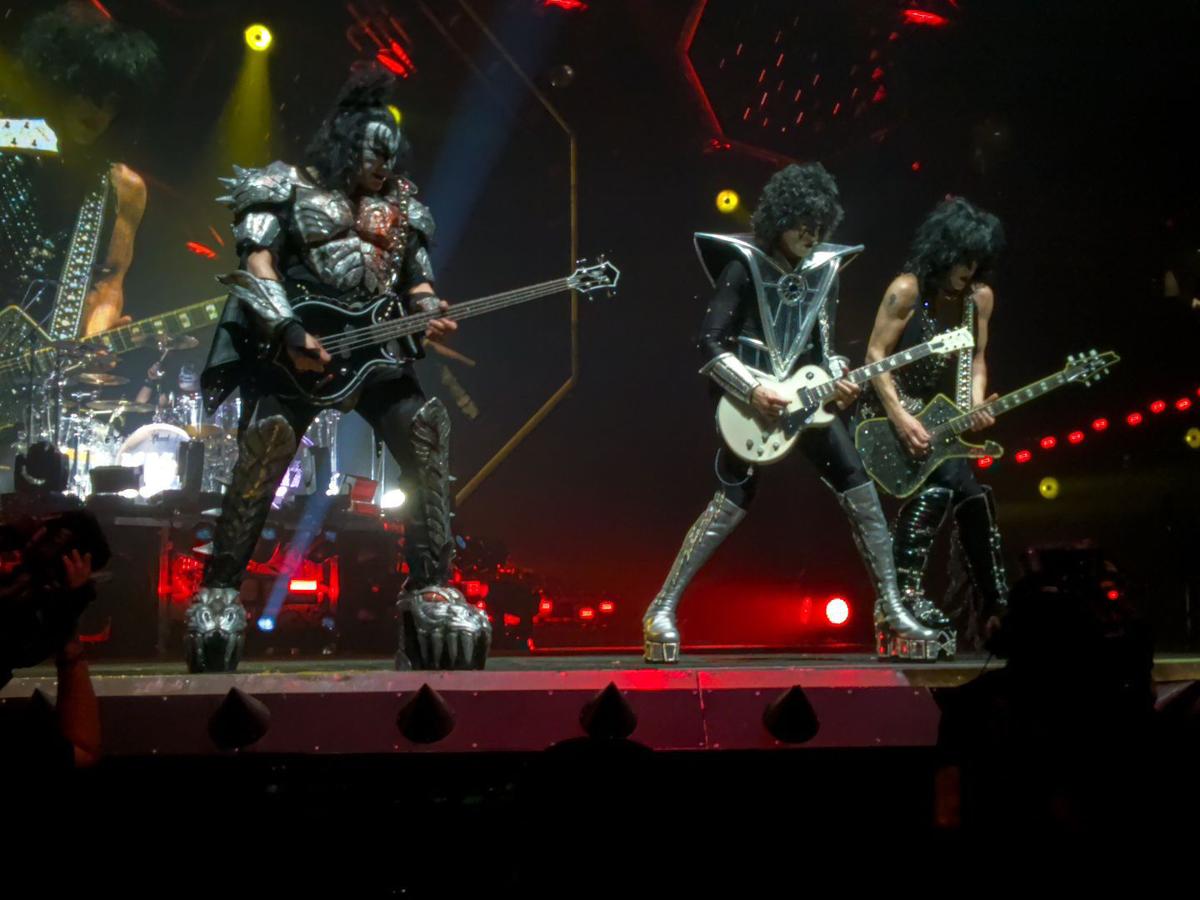 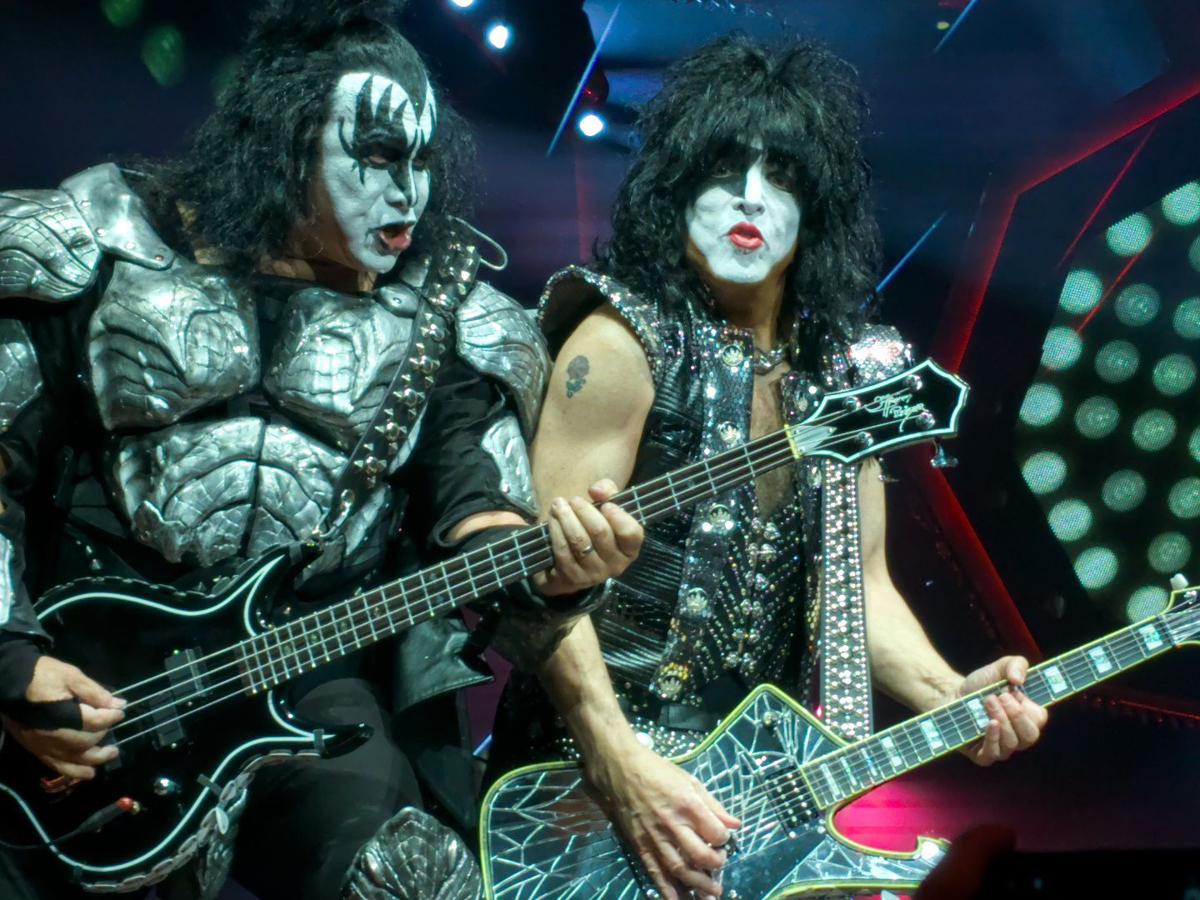 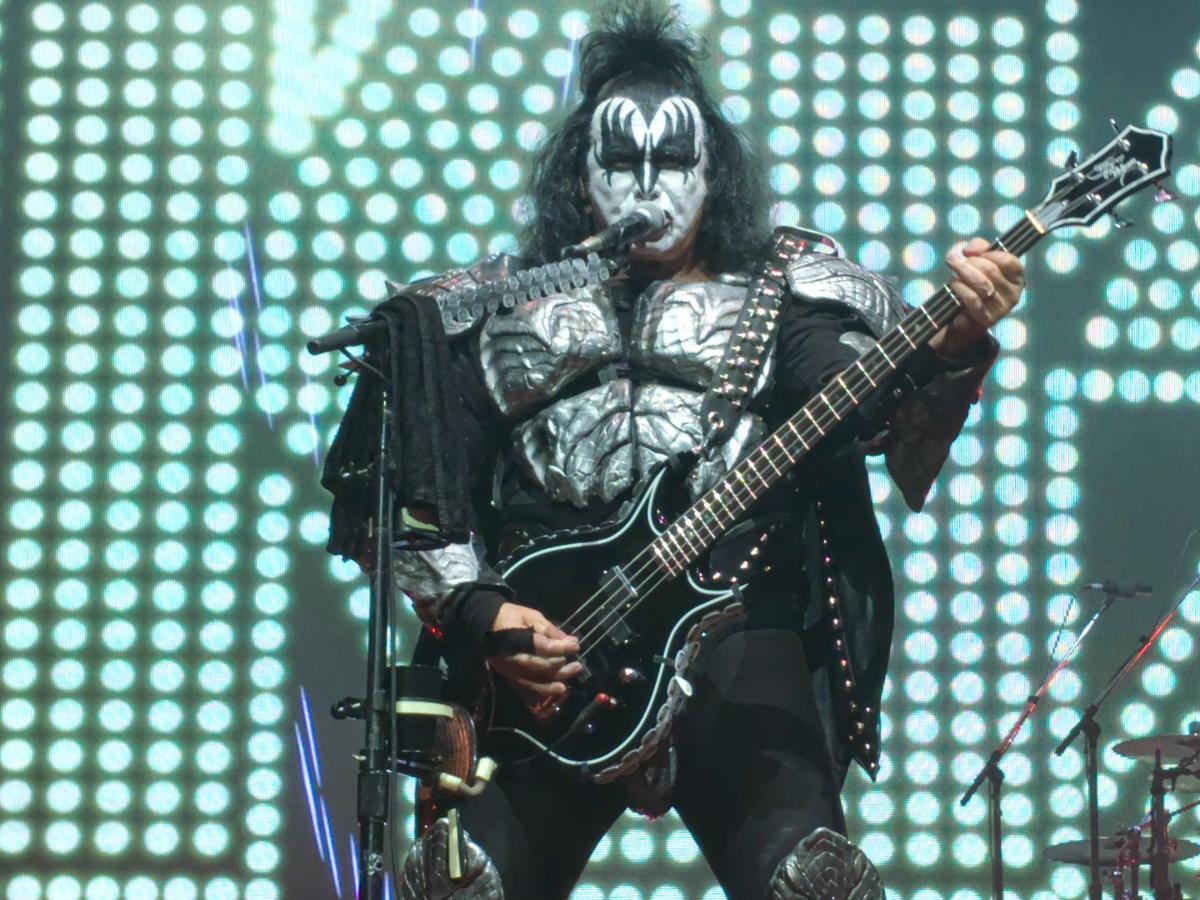 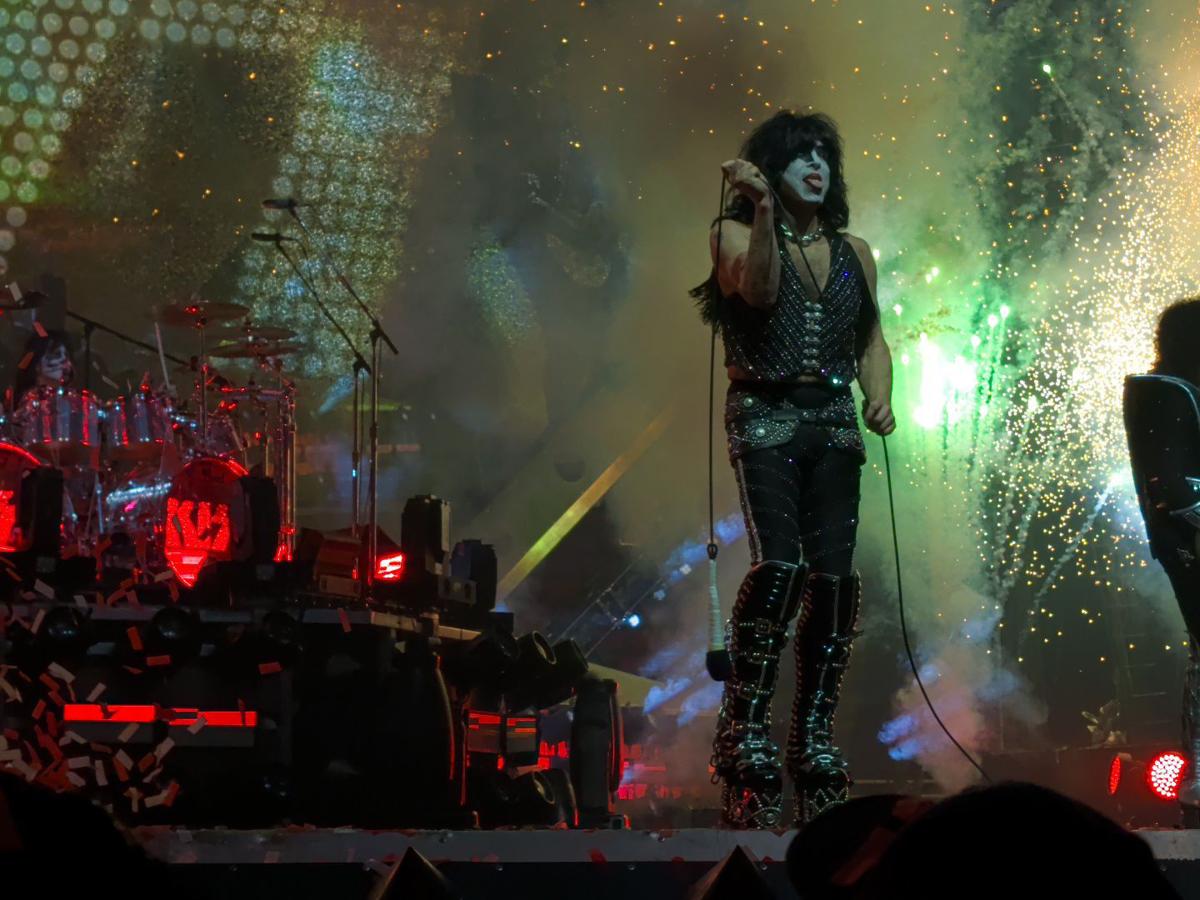 Kiss super fan John Downs is reflected on one of several guitars signed by Gene Simmons, including one he played in Las Vegas coated in gold lacquer. Grace Beahm Alford/Staff

Some of the basses and guitars collected by Kiss fan John Downs at his home on James Island. Grace Beahm Alford/Staff

Downs has been following and collecting Kiss memorabilia since he was in high school. Grace Beahm Alford/Staff

John Downs holds a fraction of the many guitar picks from Kiss band members that he has collected over the years. Grace Beahm Alford/Staff

John Downs has his walls covered by memorabilia signed by Gene Simmons and other Kiss band members. Grace Beahm Alford/Staff

His wife Margaret knew: If you marry John Downs, you marry Kiss. Despite her aversion to stage explosions, she took the plunge. Today she tolerates her husband’s obsession.

“He has lots of energy to channel, so that’s a good thing,” she said. “That’s probably what made us click in first place, an interest in music.”

She’s a church musician and teacher at the School of the Arts who prefers music of another sort, but certainly doesn’t mind a good rock ’n’ roll song. John Downs has been known to listen to Handel’s Messiah, but there is no disputing that Kiss is at the top of his musical list, a fact made evident to any visitor to the Downs home on James Island.

“My wife knows it gives me pleasure,” Downs said from his man cave — the den at the back of the ground floor — in which autographed bass guitars, and framed photographs, posters and gold records hang from the walls.

Under a window are the dragon shoe covers Gene Simmons has worn on stage. Scattered about are Peter Criss’ drum sticks, guitar picks used by Paul Stanley and Ace Frehley, a plethora of photographs (all autographed by members of the band) and a letter from the Smithsonian Institute thanking Downs for donating one of Simmons’ axe guitars to the museum.

Downs, the 59-year-old owner of Charleston Auto Glass, walks around his James Island home in Kiss Crocs. He wears a colorful Kiss shirt. He displays original paintings by Stanley in the house. He got serious about his Kiss collection 10 years ago, going out of his way to buy Simmons’ custom-made instruments and other items.

Downs has around 30 guitars, signed by Simmons and Stanley (in some cases, all four of the original band members). He also has managed to snag a custom-made Eddie Van Halen guitar, as well as one that belonged to Paul McCartney.

The collector cites Kiss, and Gene Simmons in particular, as a primary influence in his life, but his enthusiasm for The Beatles runs high indeed. He even has a rare Beatles "Yesterday and Today" Butcher cover, autographed by all four band members — of Kiss.

Downs has attended most Kiss shows he can manage to gain access to, including a number of Kiss Kruises (sailing out of Miami). He often goes with his younger brother, Jamie, a forensic pathologist living in Savannah who is nearly as obsessed with the band as his more outgoing sibling.

Of course, the brothers are going to Kiss’ "End of the Road" World Tour show Aug. 8 at the North Charleston Coliseum. Already they have seen three shows on the three-year-long tour (in Raleigh, Atlanta and Nashville), and are planning to see the show in Charlotte on Aug. 10, two days after the local concert. The “final tour ever” just might be: Simmons is almost 70. Stanley is not far behind. The band has been reinvented a few times; it has lost personnel and gained new members; it has fueled the passions of its early fans and found new admirers.

Downs remembers how he first discovered the group. It was 1977. The band’s breakthrough record, “Destroyer,” had been released the year before, and Downs, then 17, found a cassette version of it laying around at a friend’s house downtown. He put it in the cassette deck, heard the hard-hitting intro and first verse and chorus of “Detroit Rock City” and was hooked.

Stanley’s screeching vocals, Simmons’ thumping bass and that rippin’ guitar sparked something inside of him. This wasn’t merely “heavy metal” music; it had cool guitar hooks and singable melodies. It was catchy.

Jamie Downs fell in love with the band at that time, too, and recalled the first-ever Kiss concert he and his brother attended. It was at the old Carolina Coliseum in Columbia. They sat in the last row of the upper deck, dead center, looking across the entire span of the venue to the stage below. It was the first time their father let the boys spend the night out of town.

All these years later, John and Jamie Downs sit up close. The band knows them both well. The brothers get access. They are acknowledged by the musicians. Once, John Downs’ bald head was featured prominently on the jumbo screen.

“It’s every fan’s dream come true,” John Downs said. “We went from the back row to the front.”

The Downs brothers’ Kiss collections have been growing lately. John is about to buy yet another of Simmons’ custom basses. Jamie recently commissioned and received a new painting by Paul Stanley called “Confined Space,” a tribute to astronaut Michael Collins, who remained in the command module orbiting the moon while Buzz Aldrin and Neil Armstrong manned Apollo 11’s lunar module.

John Downs has some of Stanley’s paintings, too: two feature blues musicians, another of Lady Liberty. They are colorful, impressionistic works confidently made with bold brushstrokes.

“I started painting 18 years ago, purely for myself,” Stanley said. “Things were tumultuous at that time in my life, I was trying to pinpoint where I was emotionally.” Since then, it’s become more than a side hobby, he said. “When I’m home, I usually paint five days a week.”

Stanley is the lead songwriter and singer and rhythm guitar player in Kiss. He’s largely responsible for the songs “Love Gun,” “God of Thunder,” “Black Diamond,” “I Want To Rock and Roll All Night and Party Everyday,” “Detroit Rock City” and “I Was Made For Lovin’ You.”

He’s the guy who wears the star makeup and goes shirtless on stage and swings the microphone around his head.

His soul brother, and the only other original band member, is bassist Gene Simmons, "the Demon," the man with the long tongue who spits stage blood. They have succeeded in this lifelong collaboration because they share the same goals, Stanley said.

“We’re very different, and yet our work ethic is totally the same,” Stanley said. “He’s family to me. I don’t agree with a lot of the things he might say or do, but he’s like a brother to me.”

They have an immigrant story in common, mothers who were victimized by the Third Reich, survived and escaped to the U.S.

“I think it was something that didn’t need to be spoken about, but that just from our upbringing and history gave us certain common roots,” Stanley said. “Our parents instilled in us a work ethic and pride in who you are and the ambition to be better than you are, and to have your children to be better than you are. Yeah, I grew up with people with numbers on their arms, came from a dark period that led to a lot of light.”

The band always has been about more than music. The band has more than 2,000 brand licensees and one of the most recognizable logos in the world. Stanley has leveraged this success to create more success, earning millions of dollars from his paintings and finding his way into other ventures.

Such as musical theater.

In 1988, he saw “Phantom of the Opera” in London and had an epiphany, he said. Just as when, on Feb. 9, 1964, he saw The Beatles perform on the Ed Sullivan Show and knew he could touch people in a similar way, so too did he recognize the power of theater and his own ability to harness it.

He auditioned in New York City and landed the lead role in the Toronto production, performing for a six-month run, eight times a week.

“It was the hardest thing I’ve ever done in my life,” he said. “I was dependent upon an amazing cast, and also they are dependent upon you. The bar is very high.”

But the standing ovations validated his efforts, he said.

Makeup, masks, spectacle. One might be inclined to draw comparisons between musical theater and a Kiss production. But Stanley is quick to point out a major difference. With Kiss, it’s all about interacting with the audience, getting them riled up, communicating directly. A Broadway show, instead, demands that its actors serve the story, he said. It’s about creating a certain truth on stage that is witnessed by an audience separated by that proverbial fourth wall.

“We’ve always been a rock ’n’ roll band, a pure rock ’n’ roll band,” Stanley said, referring to Kiss’ tightly structured songs and comparing the group’s tunes to those written by Carol King, or Barry Mann and Cynthia Weil, or Jeff Barry and Ellie Greenwich. “They are all steeped in the same idea of writing a song that, by the time you hear the second chorus, you know it. That’s why it’s called a hook.”

For Kiss, the tour is a “victory lap,” according to Stanley. “It’s the biggest, most technically involved show we’ve ever done. It’s glorious. It really is a celebration of all of the periods of the band ... and we all know it’s the last time.”

For John and Jamie Downs, though, the Kiss shows are something more. More than a fun escape. More than a chance to immerse themselves in music they love.

They will be reminded of the valuable lessons Simmons and Stanley have taught them: If you want something, work for it, earn it.

They will see themselves reflected in the brotherly rapport between Stanley and Simmons, a rapport defined by agreement, disagreement and, above all, love.

This is the slow-motion scene at the end of the action movie when the protagonists recall important moments in their lives: that time the teenage brothers stayed in Columbia overnight, thinking about rock ’n’ roll, adventure and girls; that time years later when they read the letter from the Smithsonian to Simmons on stage after a show, causing the bass player to blink away tears; that time they twisted their professional schedules so they might get to see a Kiss concert; that painting commissioned; that bass guitar purchased; that autograph secured.

WHAT: Kiss "End of the Road" World Tour