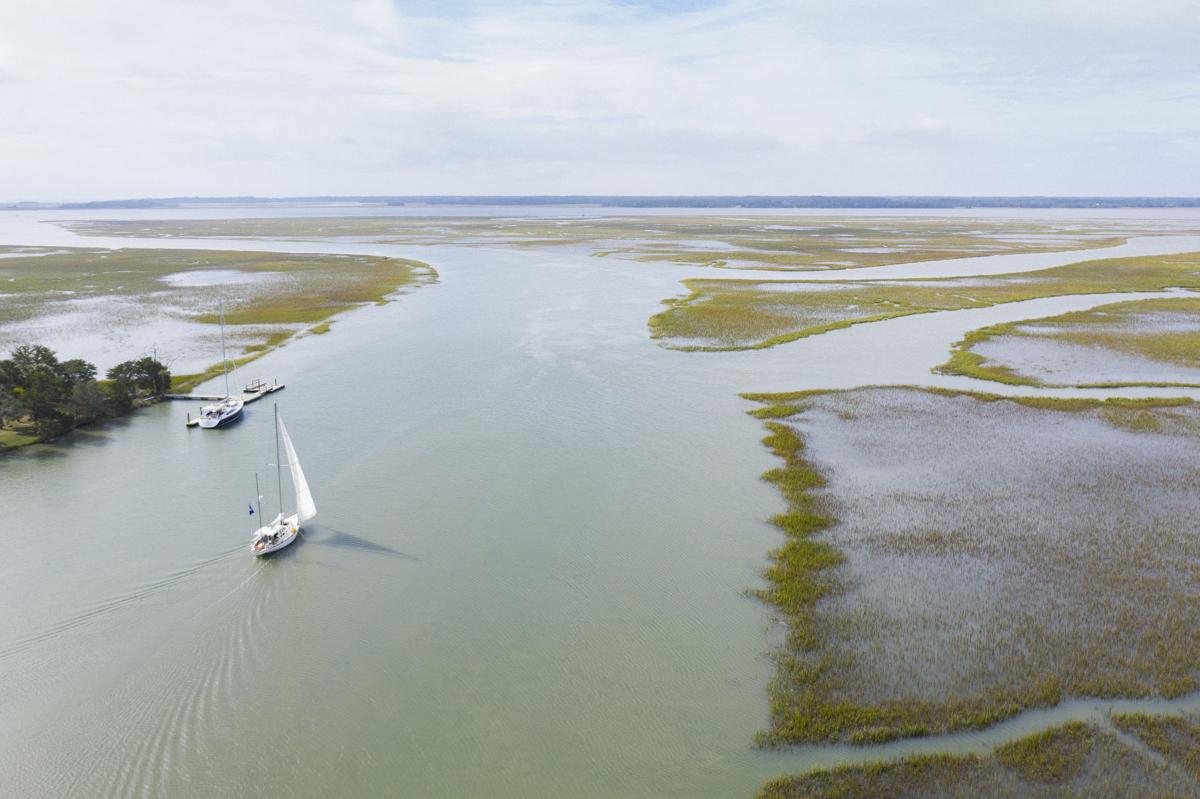 In October 2019, Tripp Brower and Zach Bjur left Rockville on J. Henry, heading towards Charleston Harbor. A couple days later they would push off on a planned two-year circumnavigation of the globe. Lauren Petracca/Staff 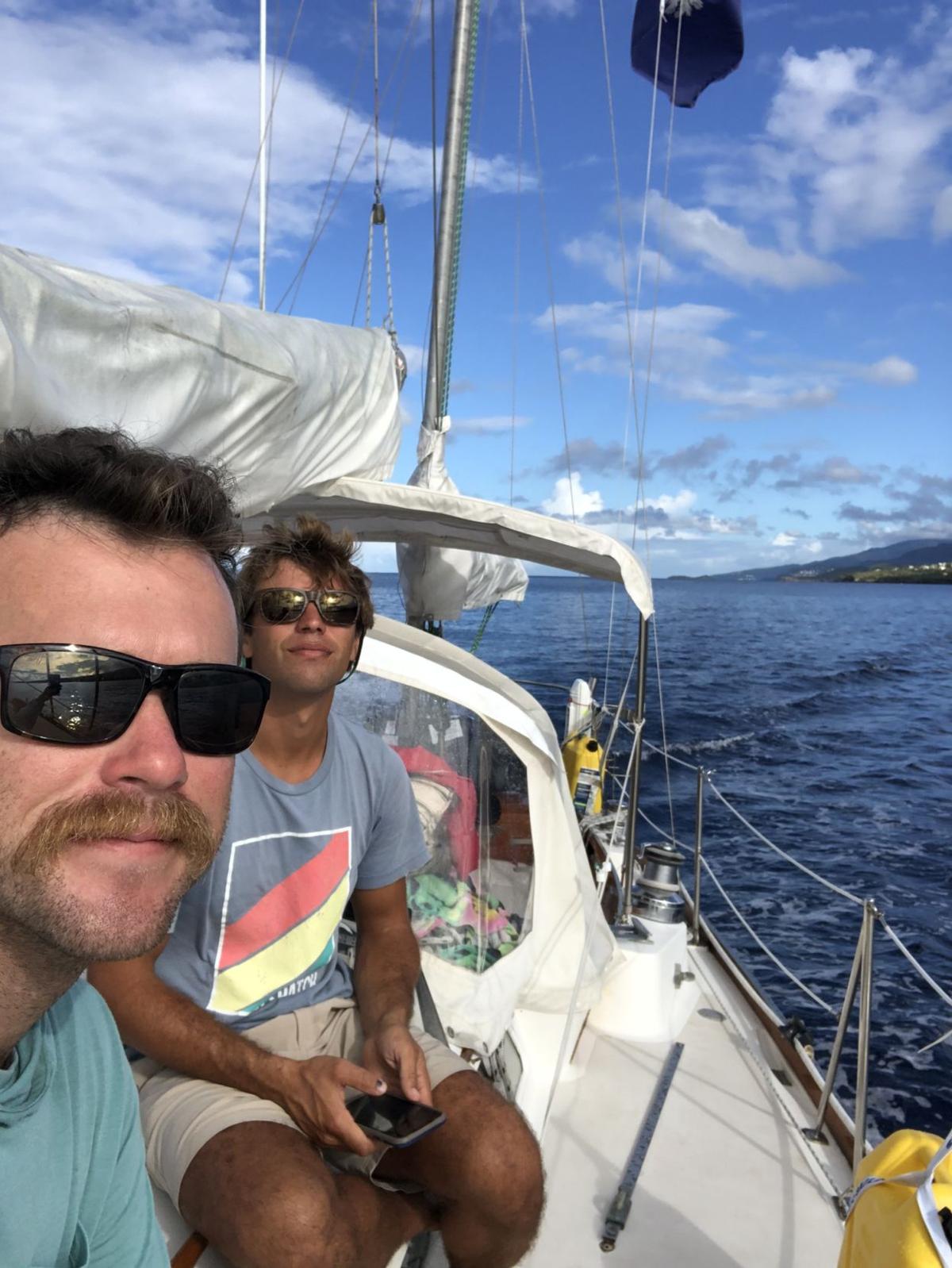 Zach Bjur and Tripp Brower on J. Henry in the Caribbean. 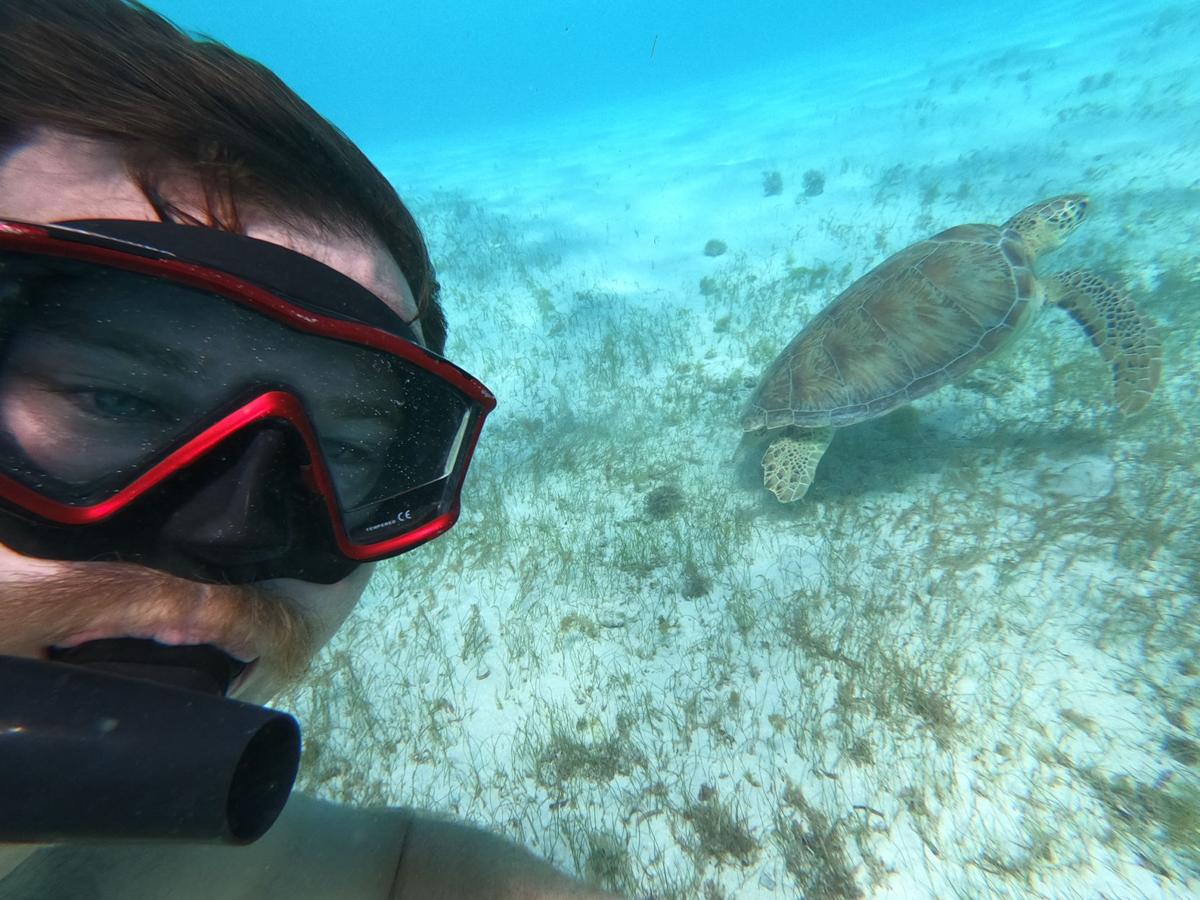 Zach Bjur diving with sea turtles in the Caribbean. Provided. 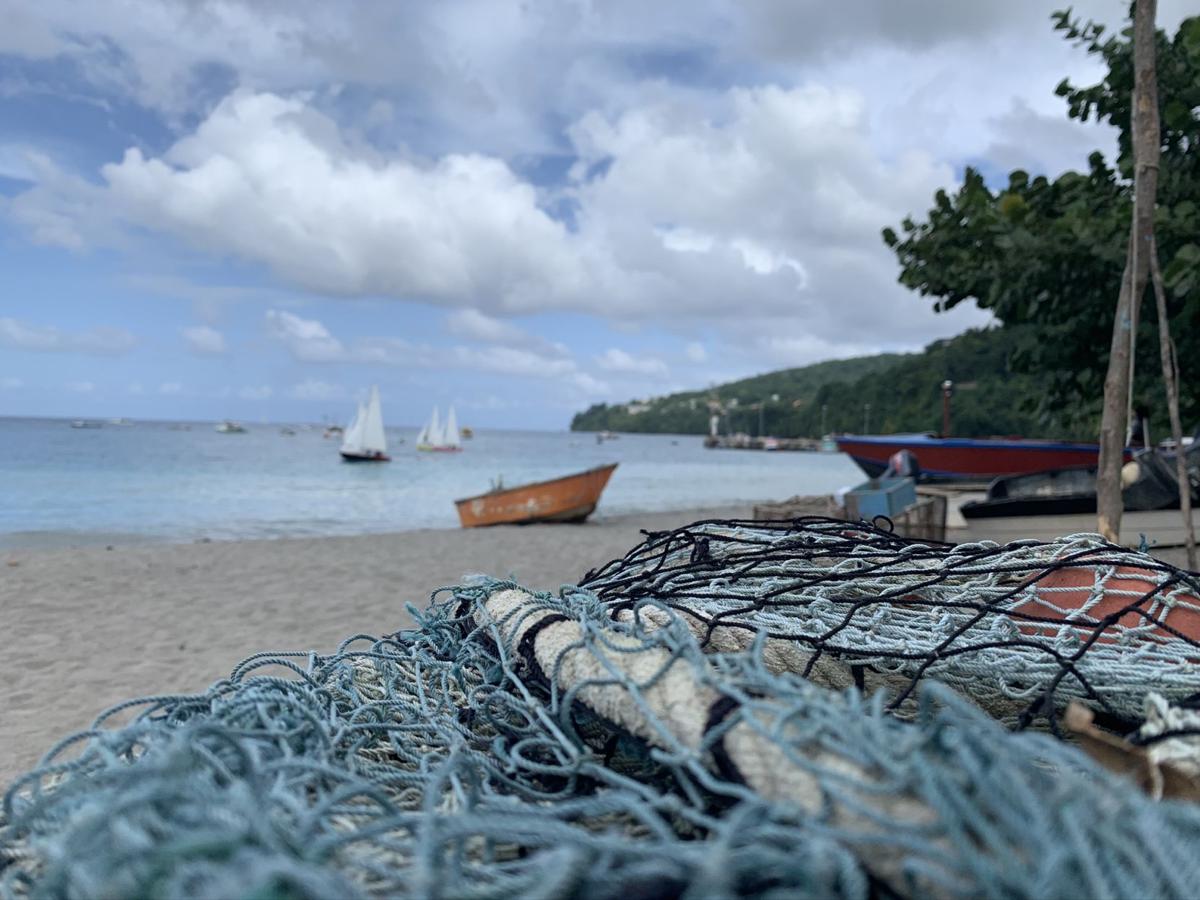 Fishing is a major industry among the windward islands of the Caribbean Sea, but fish stocks have declined significantly, and fishermen increasingly venture farther out, and sometimes into the open Atlantic, to find what they seek. Provided. 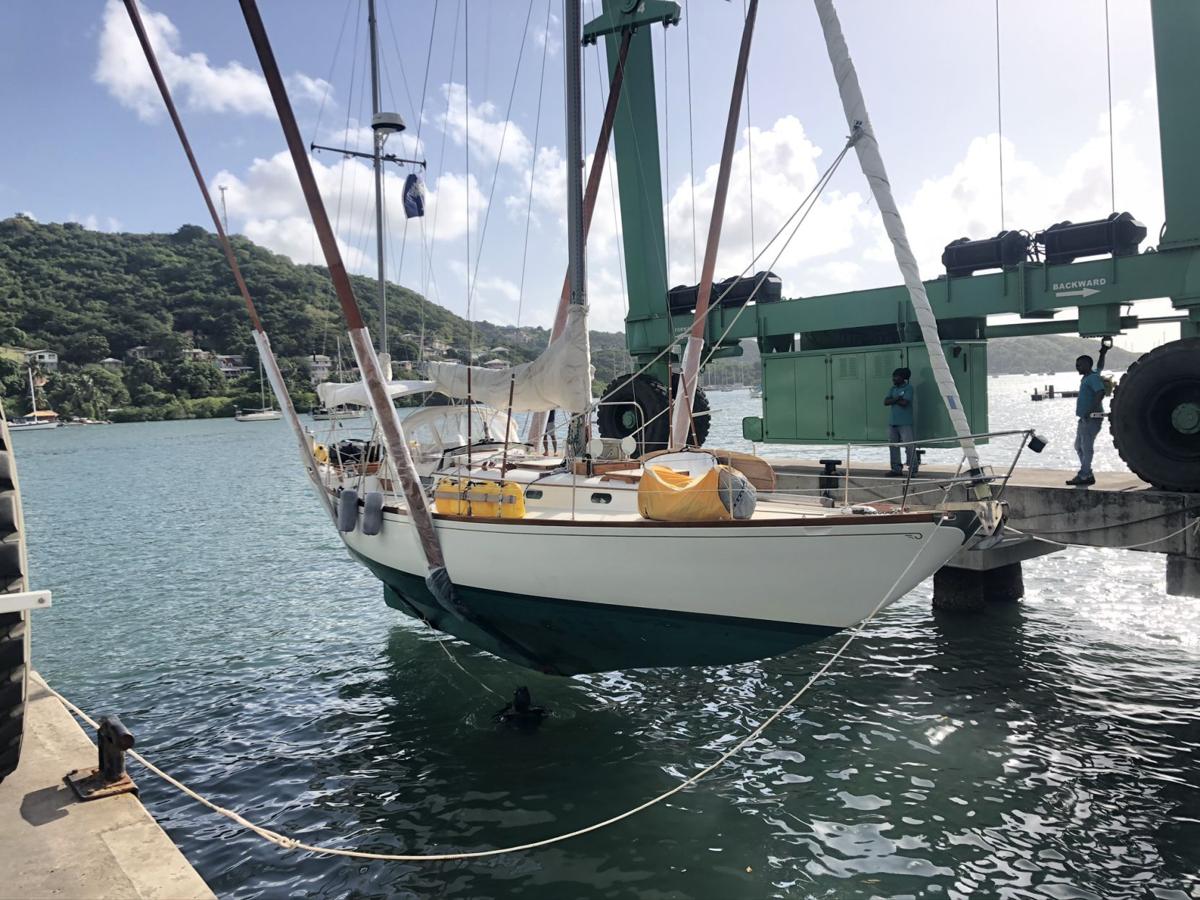 In Bermuda, J. Henry underwent some repairs and adjustments after a rough crossing from Charleston. Provided. 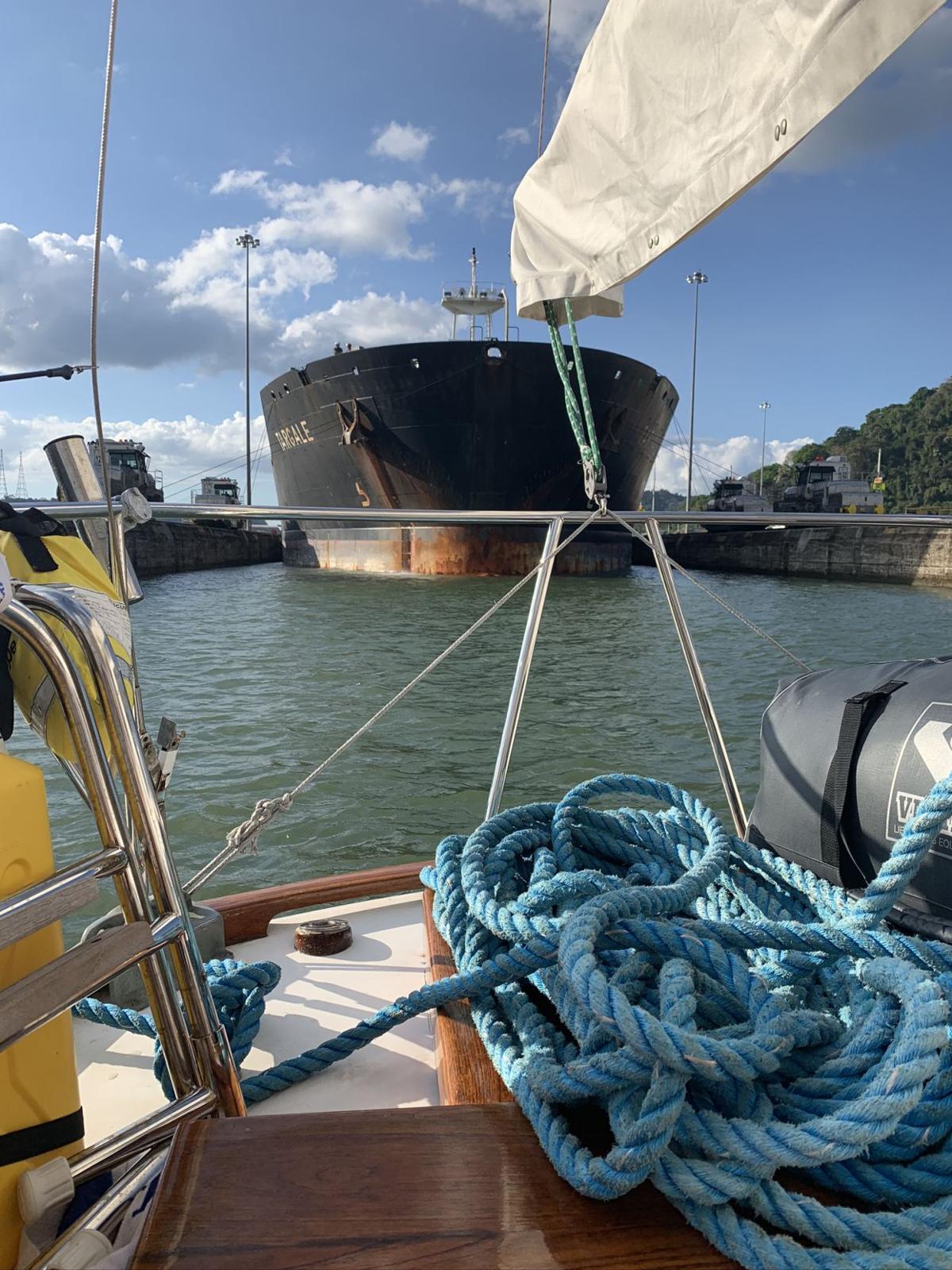 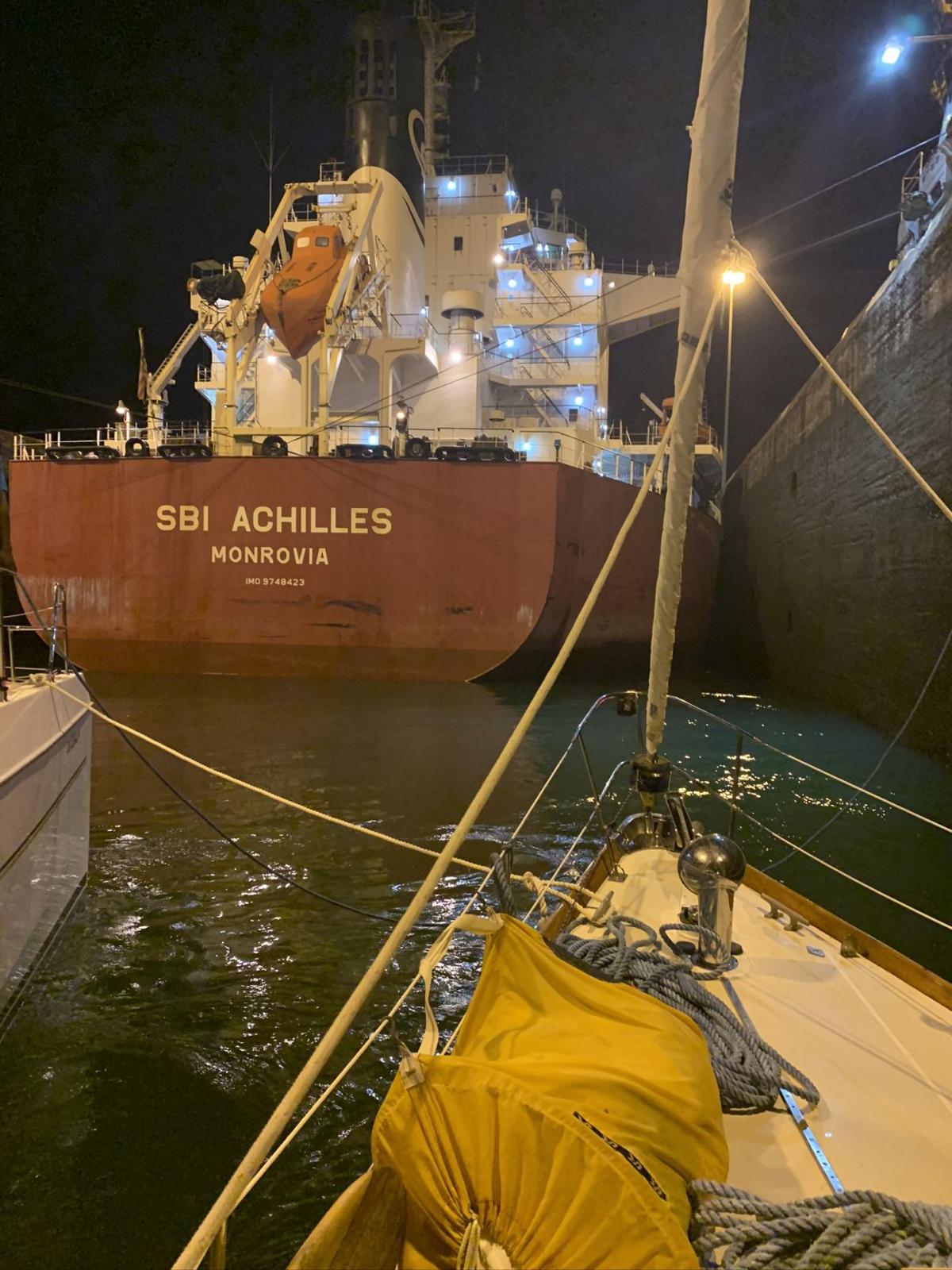 J. Henry passing through the Panama Canal, leaving the Caribbean for the Pacific Ocean. Provided. 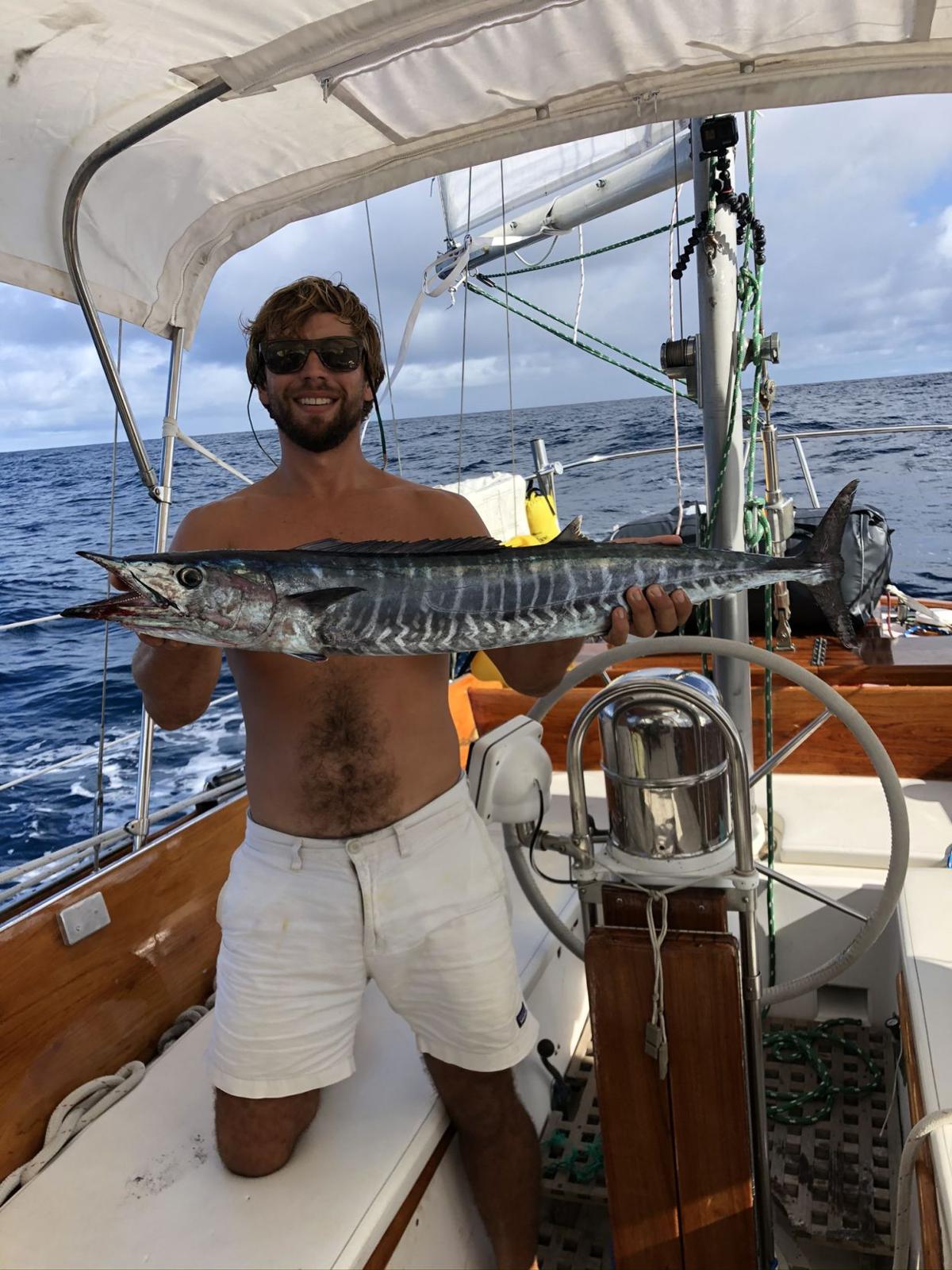 Throw a line over the stern and pluck a wahoo out of the Caribbean Sea. Provided. 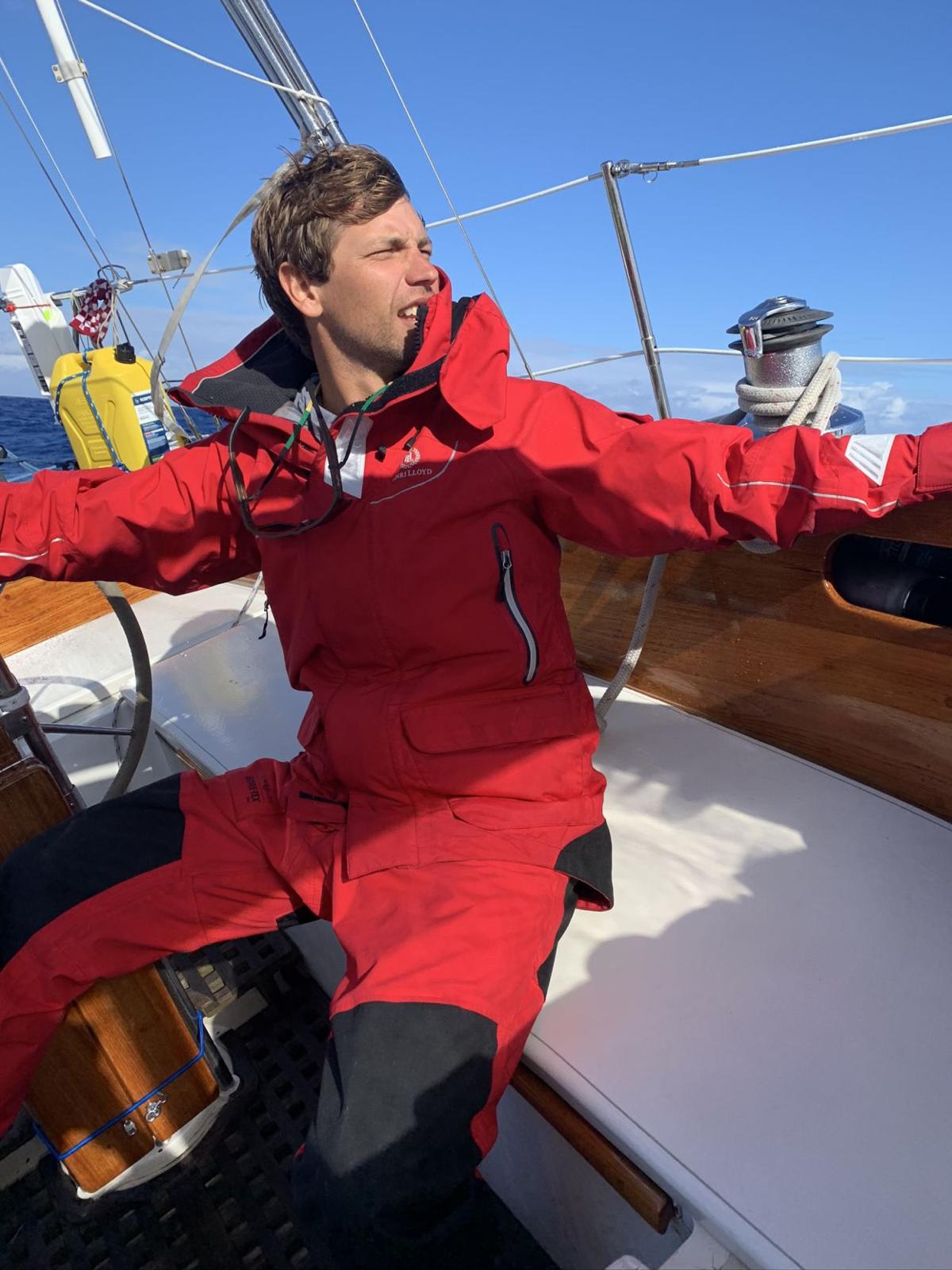 When the winds and waves kicked up, it was time to don the foul weather gear. Provided. 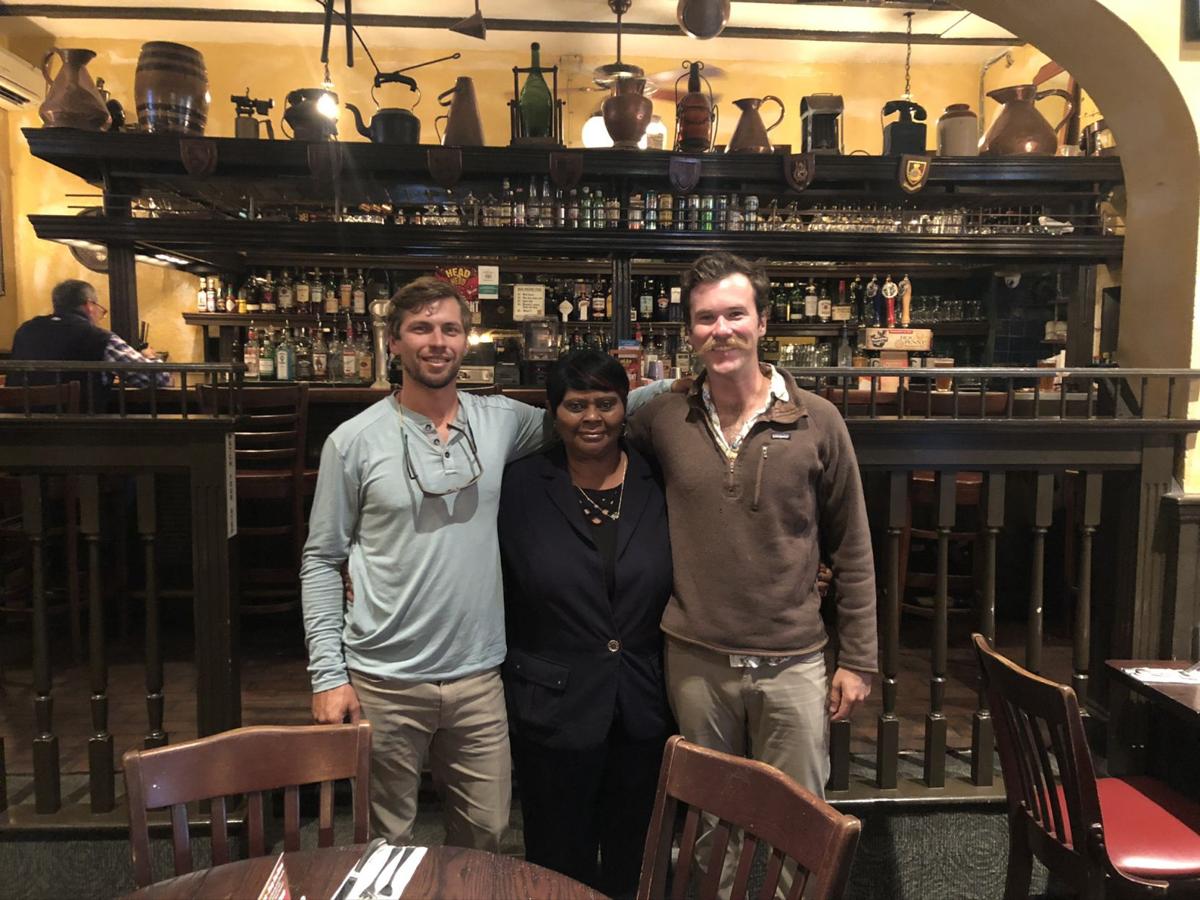 In Bermuda, Tripp Brower and Zach Bjur met with locals, including this bar operator, to learn from their experiences. Provided. 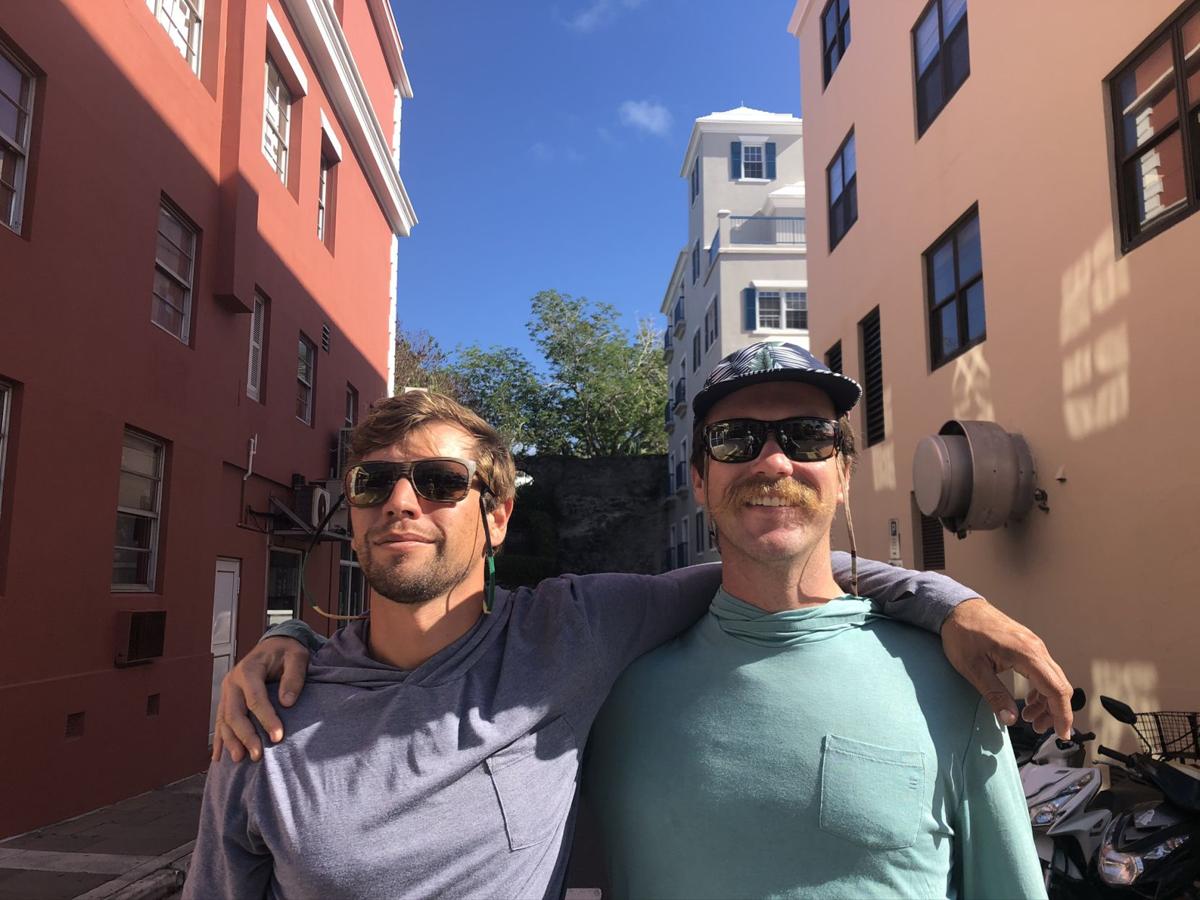 Tripp Brower and Zach Bjur on terra firma during the Caribbean leg of their global circumnavigation. Provided. 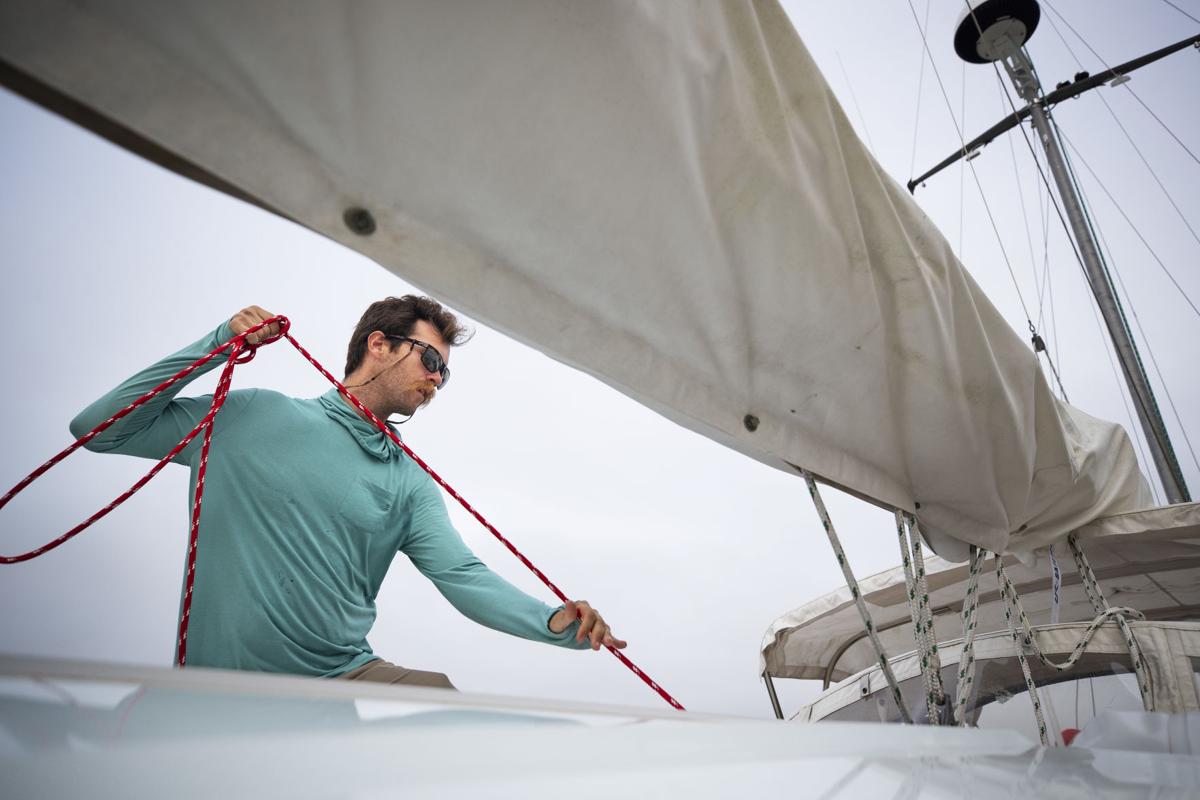 On Oct. 30, 2019, Zach Bjur prepares J. Henry for a sailing trip around the world. Lauren Petracca/Staff

In October 2019, Tripp Brower and Zach Bjur left Rockville on J. Henry, heading towards Charleston Harbor. A couple days later they would push off on a planned two-year circumnavigation of the globe. Lauren Petracca/Staff

J. Henry passing through the Panama Canal, leaving the Caribbean for the Pacific Ocean. Provided.

In Bermuda, Tripp Brower and Zach Bjur met with locals, including this bar operator, to learn from their experiences. Provided.

On Oct. 30, 2019, Zach Bjur prepares J. Henry for a sailing trip around the world. Lauren Petracca/Staff

EDITOR’S NOTE: This is the first update on the adventures of Tripp Brower and Zach Bjur, who are sailing around the world in search of answers to the climate crisis. Read the original story here.

Non-sailors might assume that operating a boat at sea is relaxing, that one can set a schedule and stick to it, that crew members can throw a fishing line off the stern of the boat or lay out at the bow under the warm sun.

Sailors at sea are busy managing equipment, trimming and changing sails according to the whims of the winds, struggling to stay dry and warm, tracking maritime traffic and weather, dividing tasks among crew and ensuring that all on board are safe. Often, they are making adjustments to plans — to avoid a storm, to take advantage of a good breeze, to find a comfortable speed through the water.

While most people travel in order to arrive in a certain place at a certain time, sailors understand that the destination is secondary. It’s the safe journey that matters most. The responsible sailor always is concerned with his or her boat, and keeps at least one foot on it even when he or she is not underway.

Zach Bjur and Prentice “Tripp” Brower, who set sail from Charleston in early November on the 40-foot yawl J. Henry, know how it works. They are a few months into a two-year circumnavigation of the globe. Their purpose is to examine the cultural impacts of climate change, and to gather lessons about how people are devising solutions that protect the environment and their communities.

They are working with Mission Blue, a nonprofit based in the San Francisco area that establishes conservation “Hope Spots” in environmentally sensitive areas.

J. Henry first stopped in Bermuda, nearly 900 miles due east of Charleston, before heading south to the Caribbean. The vessel recently made its way through the Panama Canal, and now Bjur and Brower, with welcomed help from a third crew member, are a few days into their month-long Pacific crossing, dipping below the Galapagos Islands and hoping to ride the trade winds to the Marquesas Islands, and then over to Fiji.

Bjur and Gowder provided The Post and Courier with an update.

“The sail to Bermuda was the roughest yet,” Bjur wrote in an email. “Almost all of the seven days it took to get to Bermuda were wet, windy, and wavy. It was a true test of endurance, and even though the boat was overcrowded with five people I don't think we could've done it with any less man power.”

In St. George, they heaved a grand sigh of relief and, over the course of two weeks, fixed up their battered boat.

“In hindsight, it was great to get some of that weather on our first passage and rip the Band-Aid off,” Bjur wrote. “It took away some of the mystery and fear surrounding the power of the ocean and gave us a healthy dose of respect.”

They got to the azure waters of the Caribbean easily enough, performed additional repairs to J. Henry while in Antigua, then made up for lost time by island hopping on a tight schedule.

“There is a definite focus on marine protection that we saw from many Caribbean governments,” Bjur wrote. “Those efforts were all too often at odds with local fishermen, though. Fish have become scarce around the isles and fishermen have to go far offshore to provide for their families. Many are even venturing into the rougher Atlantic instead of the Caribbean because they can't find fish.”

Protected areas nearshore frustrate the men who depend on the seas for their livelihood, and they are often sullied by plastic pollution, according to Bjur.

“There were plastic bottles everywhere we looked,” he wrote.

The residue of Mother Nature’s fury was clearest on the island of Dominica, which had been hit hard by Hurricane Maria in 2017. Many, perhaps most, of the structures on the small windward island were damaged or destroyed, and residents are still rebuilding.

“It was interesting to see US AID tarps used as walls, and lying in the streets,” Bjur wrote in his email.

The Tobago Cays, a marine park, provided a good example of eco-tourism.

“The government of St. Vincent has planted fields of sea grass that not only are an excellent blue carbon sink but also attract sea turtles. The waters there are filled with them.”

In search of safe harbor

Filmmaker Grey Gowder is making a documentary called “Sea Change” about this adventure. He joined Bjur and Brower in Bonaire, a tiny island off the coast of Venezuela that’s part of the Dutch Antilles, where he learned that most of the island’s natural habitat was protected. He visited a flamingo preserve and mangrove forest, took note of sustainable conch harvesting, and consulted with a scuba diving instructor who described efforts to restore and preserve the coral reefs.

Cruise ships in Bonaire are a big problem, Gowder said. They spill tourists onto the island, doubling the population in a single afternoon. The tourism industry leaves behind a lot of waste.

Gowder sailed on J. Henry along the South American coastline to Cartagena, Colombia. The first few days at sea were beautiful.

The Venezuelan Coast Guard buzzed the boat, which gave the crew a fright, but nothing came of it. The sailors dropped a line into the water and caught wahoo and yellowfin.

Then one night, when the skies were clear, the flying fish active, and the waves rolling encouragingly, Brower noticed a darkening on the weather maps. Big winds were gathering along the coast. By sunrise, huge seas pushed water into the boat.

They approached the coastline in search of a sheltered cove, but there was nothing for miles. Finally, they found a little bay, whipped J. Henry around the point and into what they assumed would be a vacant anchorage.

No such luck; it was teaming with water taxis and tourists visiting a water park by the shore. The winds spilling down the mountains and over the water knocked down J. Henry, but she popped back up and the crew busied themselves pulling in the jib sail and firing up the engine so they might chug along in search of a better spot.

But the sun was getting low on the horizon and it didn’t look like they would find safe harbor, so Brower and Bjur sent Gowder below, pulled on their foul weather gear, tethered themselves to the boat and decided to forge ahead to Cartagena, knowing they would be coping with storm-force winds and huge waves.

Previously, J. Henry’s fastest speed over ground was 8.9 knots. But now, on the back side of the enormous swells, the boat slid along much faster, at one point reaching more than 17 knots. It would be 12 hours of wet, white knuckles before they would see the haze-covered skyline of Colombia’s port city.

In Cartagena, crew members were met by friends from Charleston, including Bjur’s girlfriend, Joanna Harrison. A couple of them stayed on board J. Henry for the leg to Panama.

Into the Pacific Ocean

The passage through the Panama Canal was “mind-boggling,” according to Bjur. Water is fed into the locks at the bottom, minimizing turbulence and the time it takes to fill them up. The operation relies on gravity and hydropower.

“The canal was incredibly symbolic for both of us,” Bjur wrote. “We’ve left the Caribbean Sea, a step that most casual cruisers don’t take, and we’ve also left our home ocean. It was the closing of the first chapter of our story which was defined by learning and adapting to the undertaking we’d embarked on.”

They worked out the sailing kinks, gained valuable sea time and experience with weather challenges, optimized the boat, added a shiny new propeller and set off on Phase Two of their maritime adventure.

They also started to think about Charleston, he wrote. North Carolina has a Hope Spot. So does Georgia. Could they help establish a conservation corridor along the span of the southeastern coastline, where sea turtles, marine birds, shrimp and fish populations, dolphins and sharks could flourish without the risk of encountering plastic nurdles and elevated e. coli counts?

Gowder said his time on the boat — well, the peaceful moments — offered an opportunity to talk through the mission: how they might engage community activists, nonprofits, government officials and business leaders and make connections between the natural environment and the Lowcountry’s cultural inheritance.

They contemplated ways not to protest climate change and ecological damage but to listen to the wise people among us — the Gullah elders, the naturalists, the educators, the scientists — and absorb their lessons about how we might restore balance to the Earth.

“As we circumnavigate we will visit Hope Spots around the world and meet their ‘Champions,’ learning from them and bringing those lessons to our efforts at home,” Bjur wrote. “We’re very excited about our refined mission and we’re hoping it will get people back home excited as well.”