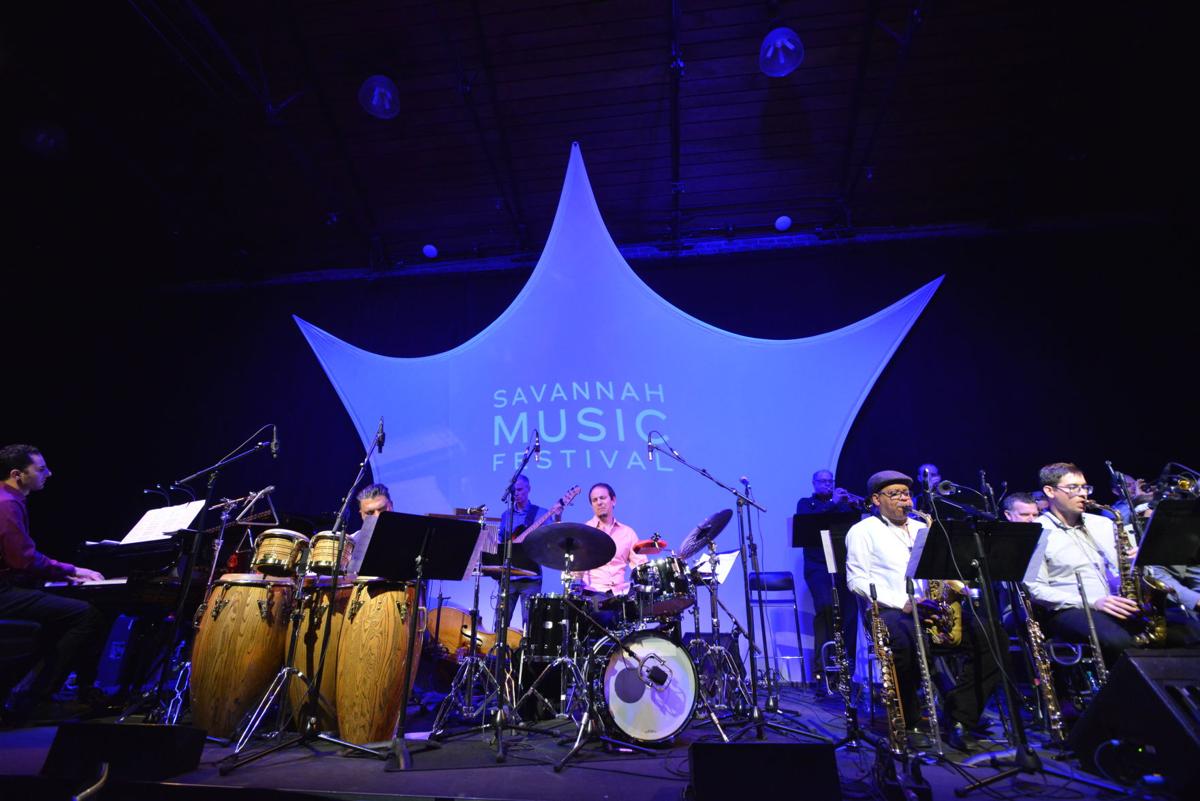 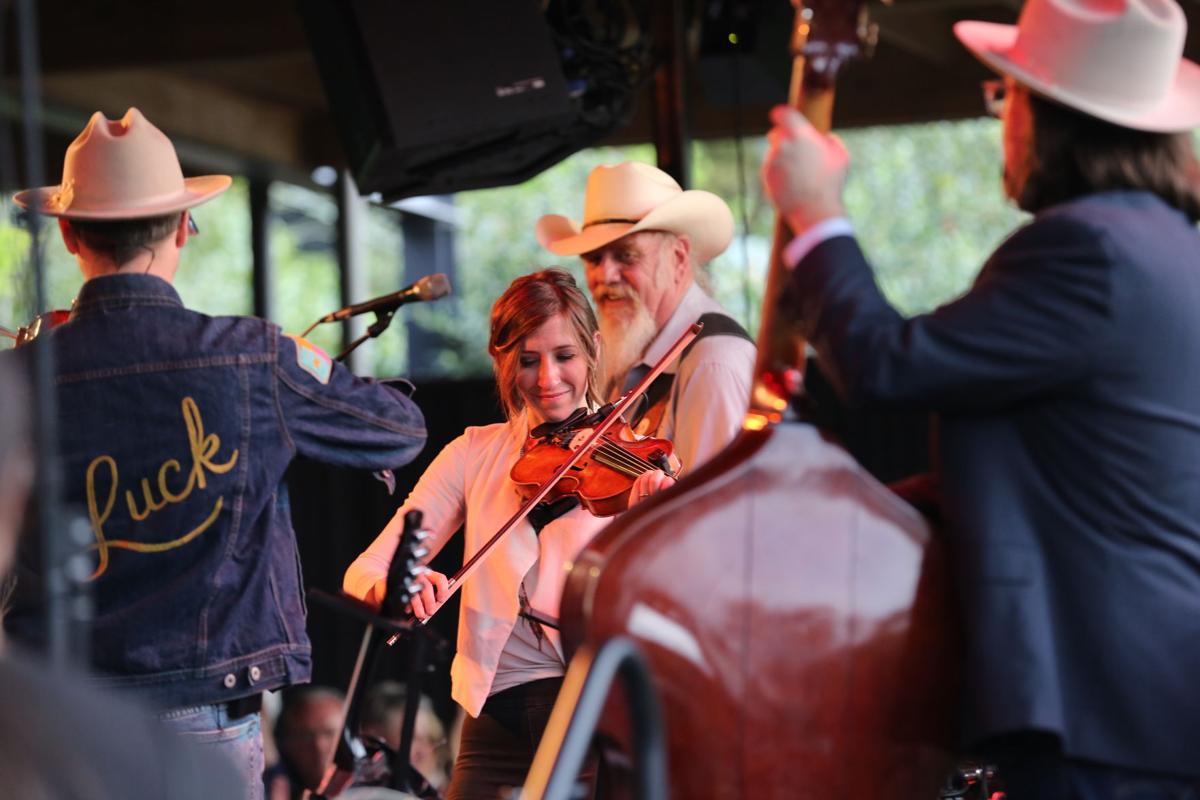 Asleep at the Wheel, led by singer-guitarist Ray Benson, has been playing American roots music since the 1960s. 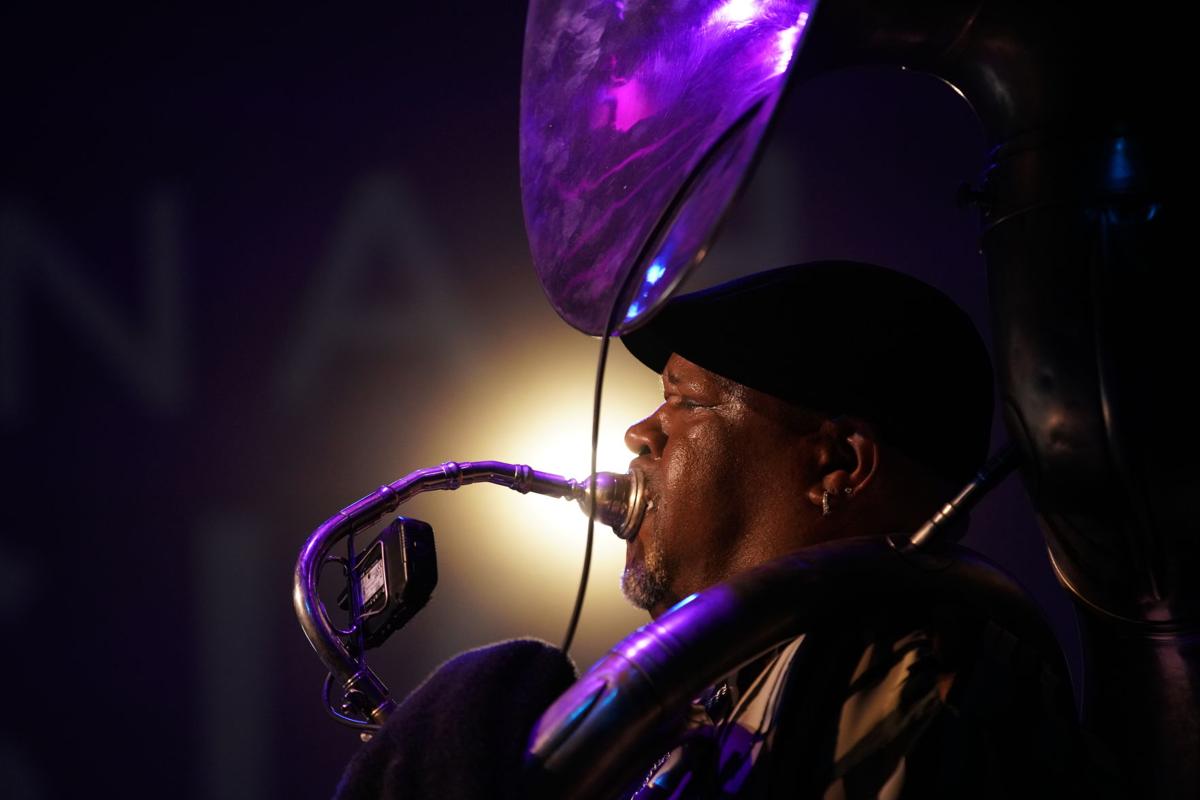 Who needs a bass when you can have a sousaphone played by Kirk Joseph of John Medeski's Mad Skillet? 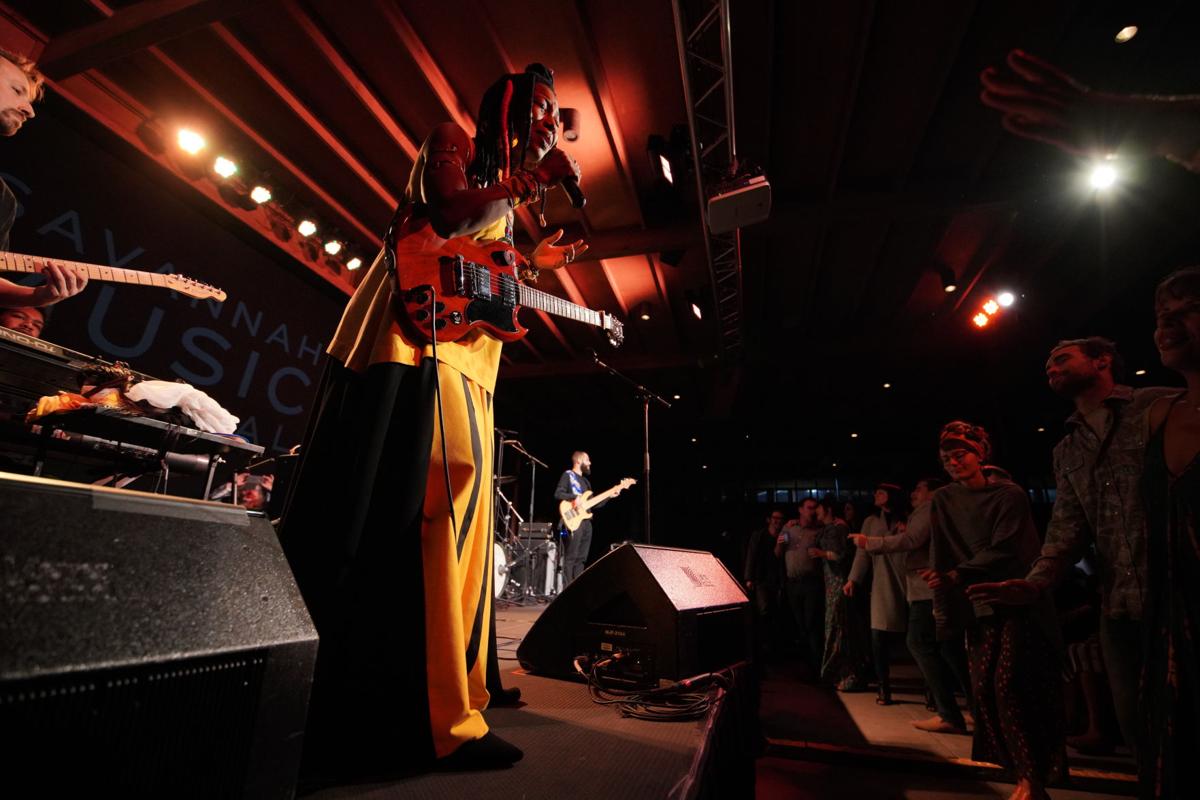 Fatoumata Diawara, of Mali, helped open the 2019 Savannah Film Festival will an infectious set at the Charles H. Morris Center. 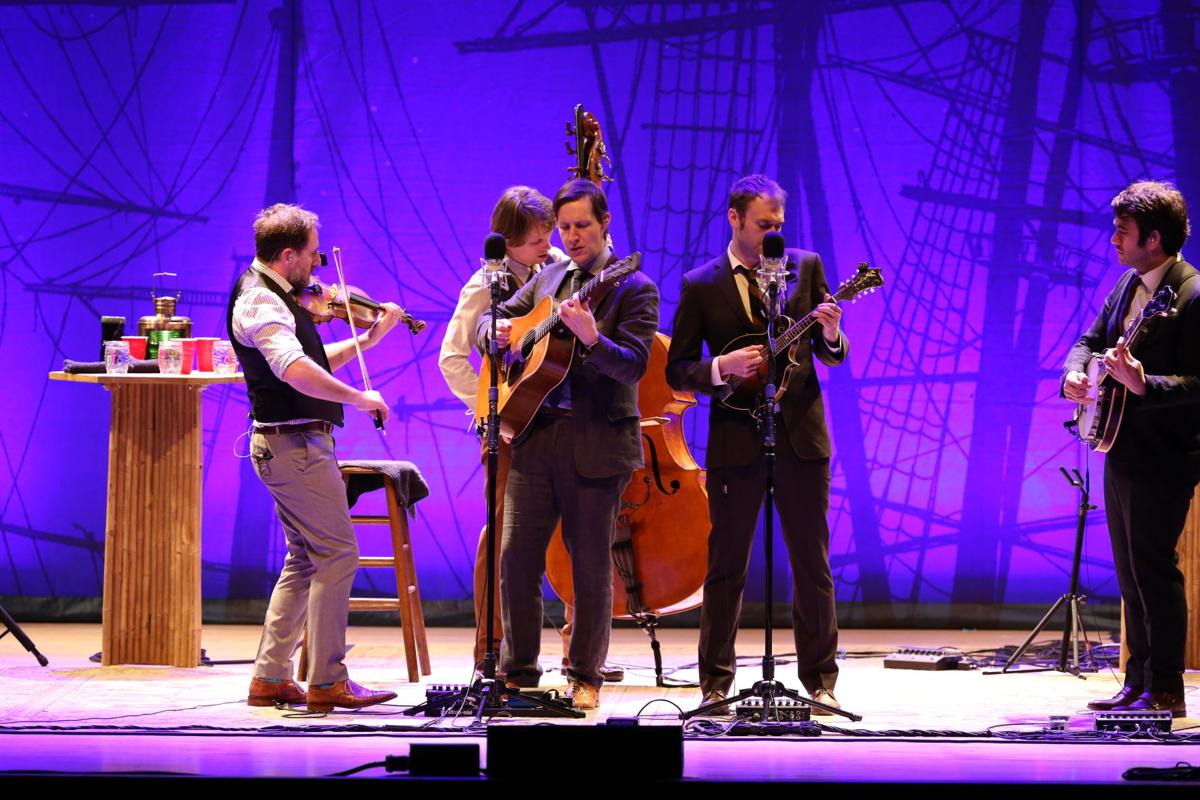 Punch Brothers is a string band that performs original songs that fall on the sophisticated end of the Americana spectrum. 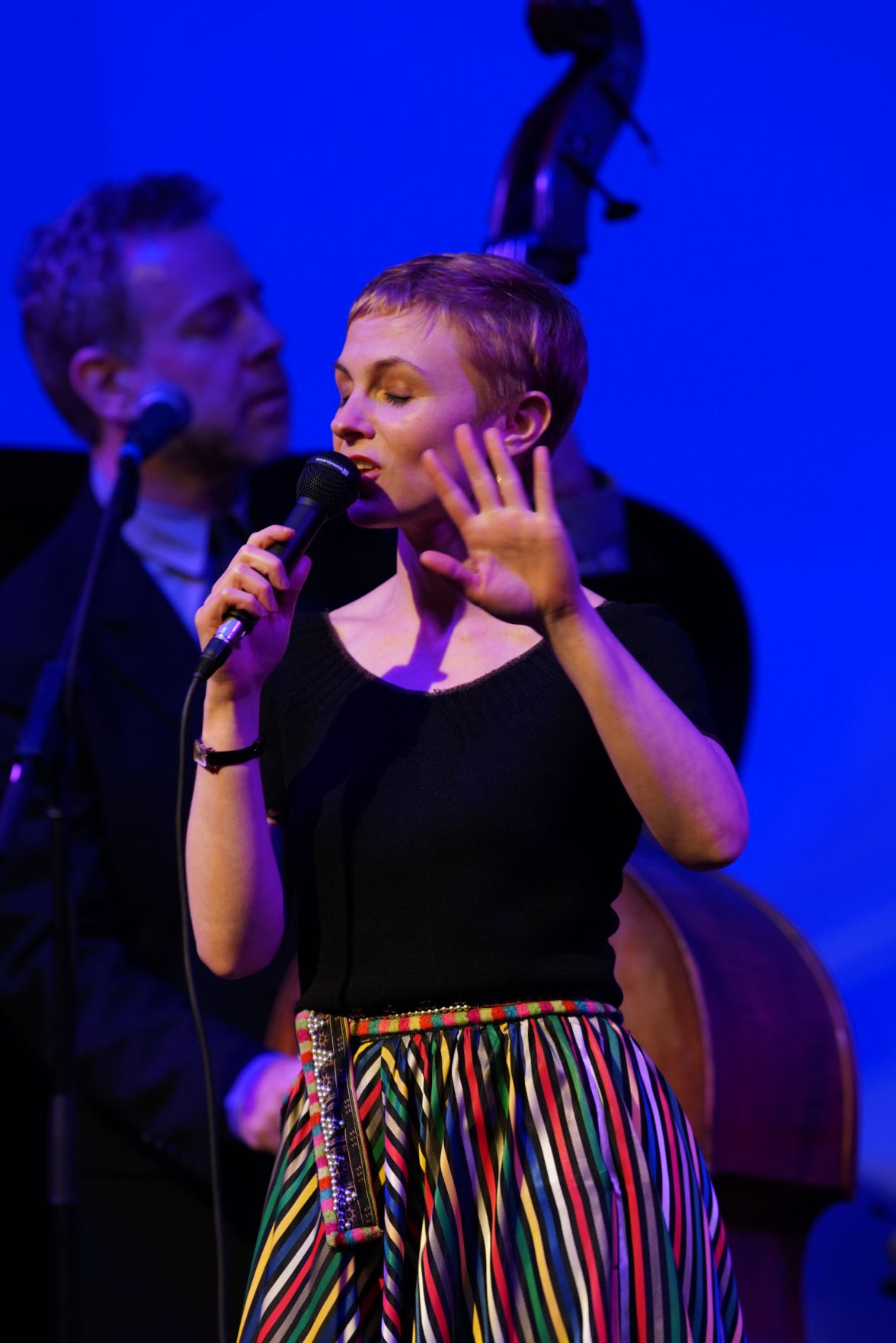 Kat Edmonson is a distinctive chanteuse whose original songs are colored with nostalgia. 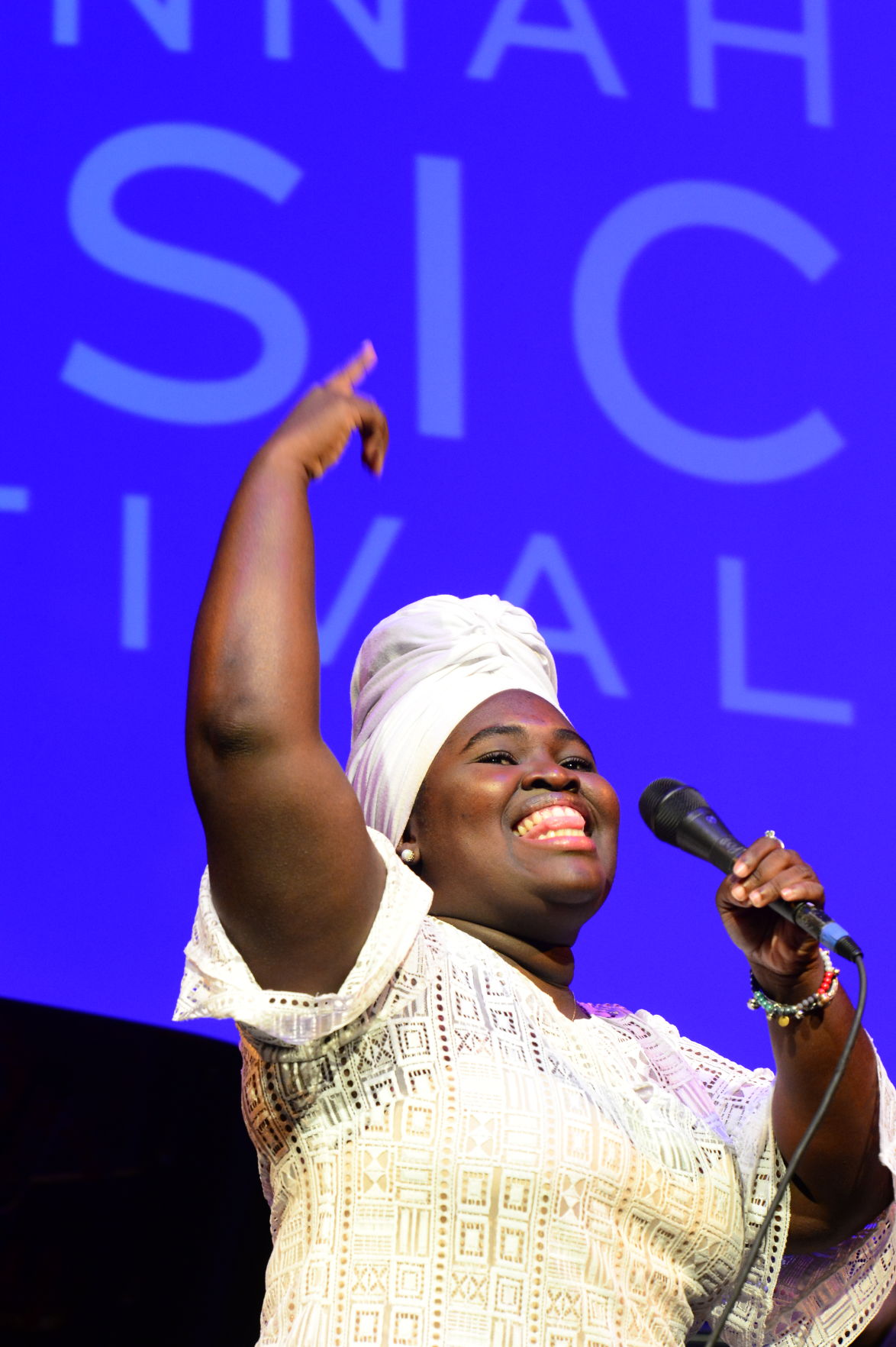 Dayme Arocena is an acclaimed young jazz singer from Cuba. 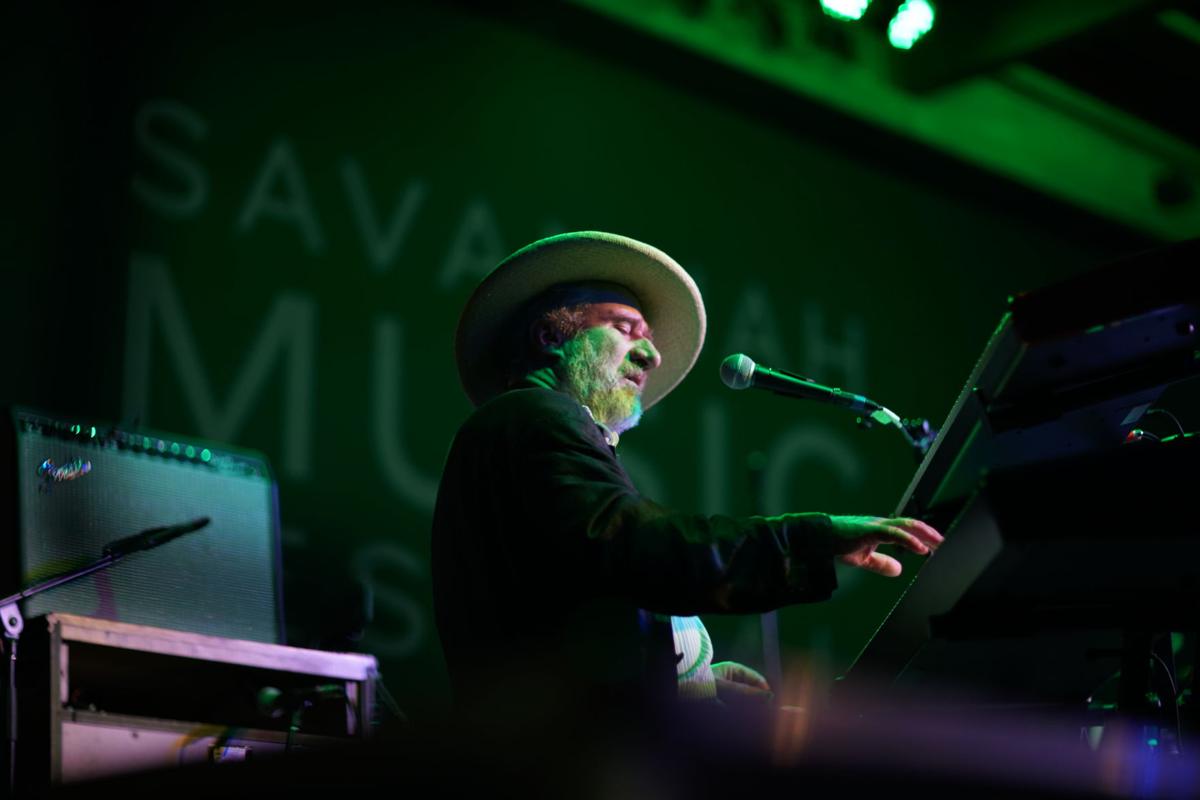 Jon Cleary is a connoisseur of New Orleans music. 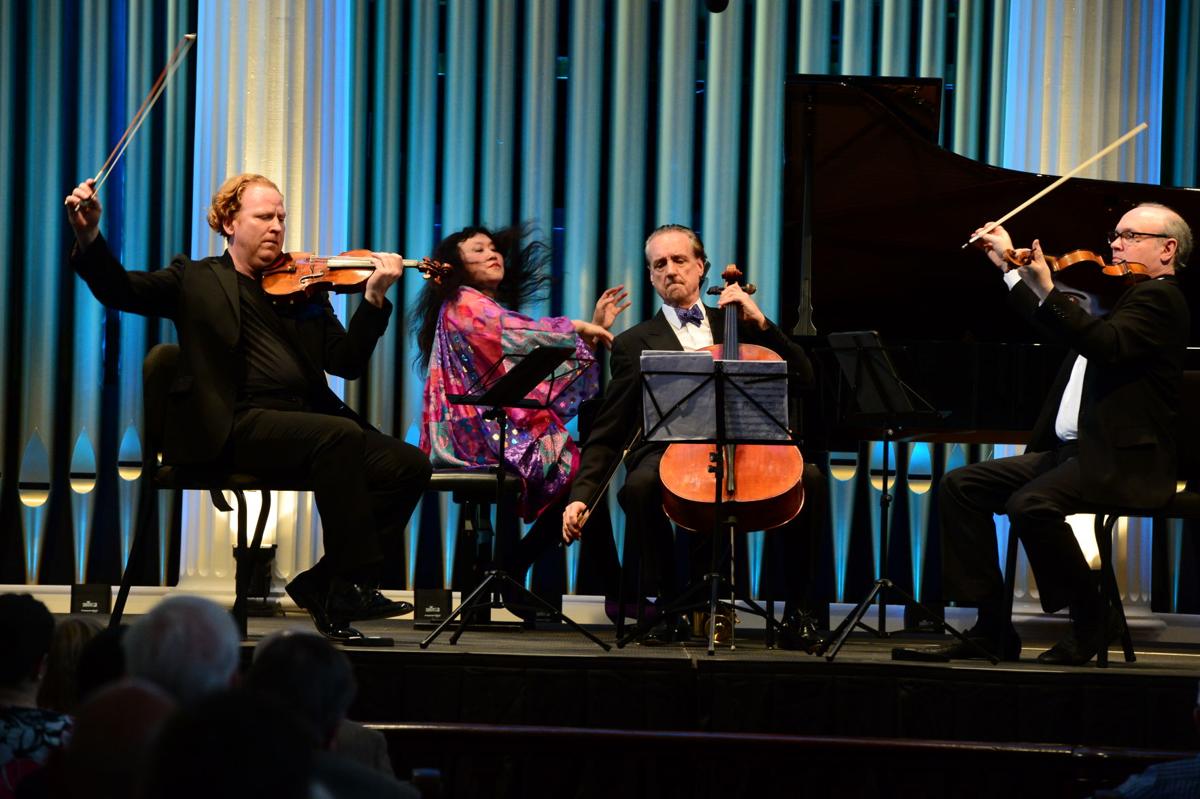 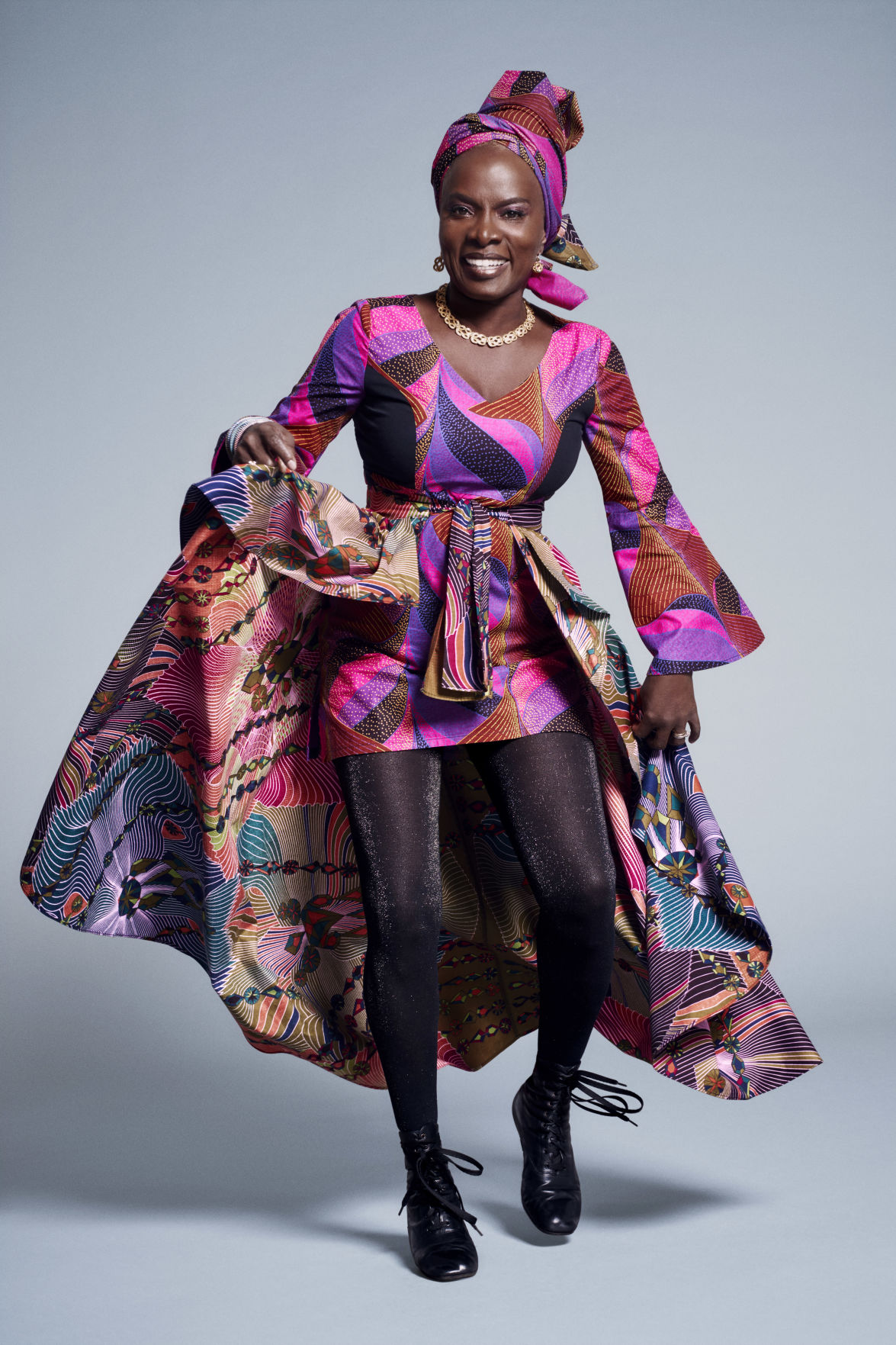 Angelique Kidjo, of Benin, is a multi-lingual diva of African music. She will perform the Talking Heads' "Remain in Light" at the Savannah Music Festival. 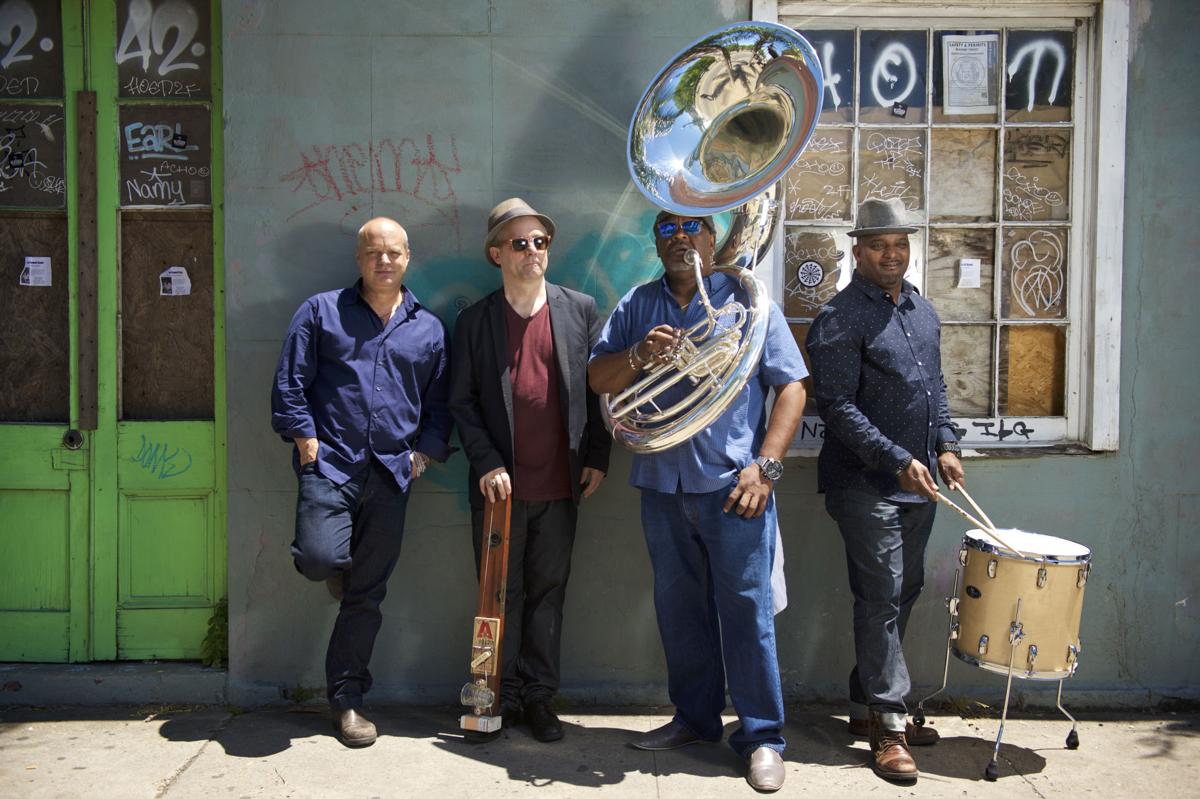 Asleep at the Wheel, led by singer-guitarist Ray Benson, has been playing American roots music since the 1960s.

Who needs a bass when you can have a sousaphone played by Kirk Joseph of John Medeski's Mad Skillet?

Fatoumata Diawara, of Mali, helped open the 2019 Savannah Film Festival will an infectious set at the Charles H. Morris Center.

Punch Brothers is a string band that performs original songs that fall on the sophisticated end of the Americana spectrum.

Kat Edmonson is a distinctive chanteuse whose original songs are colored with nostalgia.

Dayme Arocena is an acclaimed young jazz singer from Cuba.

Jon Cleary is a connoisseur of New Orleans music.

Angelique Kidjo, of Benin, is a multi-lingual diva of African music. She will perform the Talking Heads' "Remain in Light" at the Savannah Music Festival.

Everything is not always as it seems at the Savannah Music Festival.

The storied and super-fun Texas swing band Asleep at the Wheel only has one member, fiddler and vocalist Katie Shore, who can claim Texas as her birthplace. John Medeski of the rompin' New Orleans funk band John Medeski’s Mad Skillet, was born in Louisville, Ky., and grew up in Florida. New Orleans ethnomusicologist and expert performer Jon Cleary is British.

The remarkable Dafnis Prieto Big Band only includes two players from Cuba: drummer-leader Prieto and sax player Roman Filiu. (Percussionist Roberto Quintero was born in Venezuela; the rest of the large band is comprised mostly of Americans.) The Punch Brothers, a string band known for its sophisticated Americana-style music, consists of no one born in Appalachia (the closest is guitarist Chris Eldridge, who is from Fredericksburg, Va.).

For that matter, none of the musicians of Chamber Music Society of Lincoln Center who performed during opening weekend — violist Paul Neubauer, cellist David Finckel and pianist Wu Han — nor their guest collaborator Daniel Hope, hail from the lands (Germany and Czechoslovakia) that nurtured the composers whose work was presented.

All of this only reinforces the festival's international and eclectic bona fides: every genre of music has become international. Why shouldn’t someone with passion and talent learn the music he loves? For me, this worldly potpourri of musical accomplishment, this diversity of styles and performers, is what makes this 17-day event such a unique delight.

And that was all packed into the first two days of this 17-day festival! The next two days was similarly wide-ranging, with Prieto, Medeski, the trio I’m With Her, Punch Brothers, Atlanta Symphony Orchestra and the incomparable Cuban powerhouse jazz singer Dayme Arocena keeping the rich musical stew percolating.

This is the Savannah Music Festival’s 30th year, and the first in 16 years without Artistic Director Rob Gibson at the helm. In June last year, just as the 2018 festival concluded, Gibson announced he was moving on (though not moving out of town). Then, a month ago, the festival announced that Associate Artistic Director Daniel Hope also was stepping down.

This turnover is no small matter. During Gibson’s tenure, he grew the annual budget from $700,000 to nearly $4 million and gained an international reputation as a stellar programmer. He had previously launched Jazz at Lincoln Center and devoted himself to discovering fantastic talent throughout the six habitable continents.

Hope, one of three associate artistic directors, is the only one other than Gibson involved in programming. He is responsible for a chamber music series that features some of the world’s great players and draws a devoted audience year after year.

How has the festival responded to this one-two punch?

More than half of the current lineup was secured by Gibson before he left, so in a sense this is the last festival that bears his imprimatur. Indeed, two of the best shows we saw, the Mali singer Fatoumata Diawara and the Cuban sensation Dayme Arocena, were booked by Gibson.

Going forward, two people will take over for Gibson: Ryan McMaken was promoted to artistic director and David Pratt was hired as executive director. McMaken has been with the festival 16 years, previously serving as marketing and managing director. He gained programming experience in Portland, Maine, when he worked for a small festival, and for the Portland Symphony Orchestra. He is especially well-versed in Americana and folk music.

Pratt was executive director of the Savannah Philharmonic Orchestra and Chorus from 2010 to 2015 and, most recently, was CEO of the Queensland Symphony Orchestra in Brisbane, Australia.

The festival moved fast after Gibson left to ensure continuity, finalize 2019 programming and prepare for 2020. Soon, the staff will work on a three-year strategic plan whose broad goals include “building on programming, education and audience development,” according to McMaken. In the works is a new jazz education program modeled after El Sistema, the music outreach “system” started in Venezuela in 1975 by Jose Antonio Abreu.

The festival also is hoping to present more off-season concerts and family-friendly programming. The timing seems good, he said. The organization is starting a new phase and the city of Savannah is about to get some new venues, making it more of a regional destination for performers.

Indeed, Gibson will play a leading role in this general expansion of the arts in town. He’s working now for hotel developer Richard Kessler, who operates several Grand Bohemian Hotels, including one in Charleston, and whose new Savannah property will be a JW Marriott with a 300-seat music club, 500-seat outdoor performance space and three rooftop terraces featuring live music.

Gibson said he is in charge of programming for these venues, and for determining the music that’s piped into Kessler’s various hotel properties.

“It’s the first time in 35 years I haven’t worked for, or run, a nonprofit organization, and it feels really good,” Gibson said.

It is not surprising that Gibson, an experienced and detail-oriented music manager, should have landed on his feet after a sudden departure from the festival due in part, he said, to disagreements about programming oversight.

He said he hopes festival staff will continue to find and promote lesser-known musicians from abroad, such as Noura Mint Seymali of Mauritania, whose powerful voice and accomplished interplay with guitarist Jeich Ould Chighaly mesmerized audiences on opening night. And he wondered if the festival will continue to commission new work.

For a festival like this to succeed, “you have to have people who think outside the box,” he said.

McMaken said the festival is a product of Gibson's remarkable vision and ability, and the goal now is not to impose radical change but to expand upon Gibson’s successes.

Next year, the festival plans to present master tabla player Zakir Hussain, the Atlanta Symphony featuring pianist Andre Watts, the Dover Quartet and much more, striving to maintain the high standards and enormous variety for which it has become known.

I confess I can’t get Dayme Arocena out of my head. Youthful, short, stout, sensual, expressive, she commanded the Charles H. Morris Center on the second day of the festival, belting tunes that were an amalgam of traditional Cuban music and innovative, improvisational jazz, with complex rhythms undergirding the powerful aural experience. Coursing like blood through the music’s veins was Santeria, a synchretic Afro-Caribbean religion that combines Catholicism with Yoruba spirituality.

Robin Denselow of The Guardian called her “Cuba’s finest young female singer.” That seems about right.

Another highlight was the Dafnis Prieto Big Band. Prieto, clearly a perfectionist, sits center stage at the drum kit and plays with controlled ferocity. Next to him Roberto Quintero strikes, taps, shakes and blows through an array of percussion instruments and bird whistles large and small, adding color and dimension to music already rich with rhythmic and harmonic vitality.

The horns were sublime. These accomplished players didn’t miss a note of the propulsive, infectious tunes. It’s a wonder audience members didn’t leap to their feet and dance.

The Punch Brothers played a set of innovative songs, many from their most recent album “All Ashore.” This isn’t your grandfather’s bluegrass. In fact, it’s not really bluegrass at all. These are compositions that happen to employ string instruments common to the bluegrass oeuvre.

The virtuosity of the players, never gratuitous, was put to use in the service of the song. The lyrics tended toward the philosophical. This is Americana string music for intellectuals.

Both Punch Brothers and the Dafnis Prieto Big Band will be at Spoleto Festival USA this year.

The Brahms is a gorgeous lament over the composer’s unrequited love for Clara Schumann that was performed with a combination of oozing passion and technical finesse. Each romantic phrase revealed its bittersweet essence. The Dvorak was played with contagious exuberance, sending sparks throughout the sanctuary of Trinity United Methodist Church. The musicians, ultra-attentive to one another, found the poetic core of the music and ensured it was conveyed fully.

This weekend sojourn to Savannah ended with a concert by Texas-born songstress Kat Edmonson, whose distinctive and appealing voice is at once reminiscent of the 1940s and utterly original. She performed a quiet, compelling set of tunes that showcased her creative songwriting and the tasteful accompaniment of her traditional band.

When, in reference to today’s overreliance on technological devices, she sang “I’m an old-fashioned gal,” Edmonson found her sweet spot, that place that straddles the eras, that looks forward and backward simultaneously, that reminds us of music’s universal, timeless appeal.

For more information and tickets, go to savannahmusicfestival.org or call 912-525-5050.