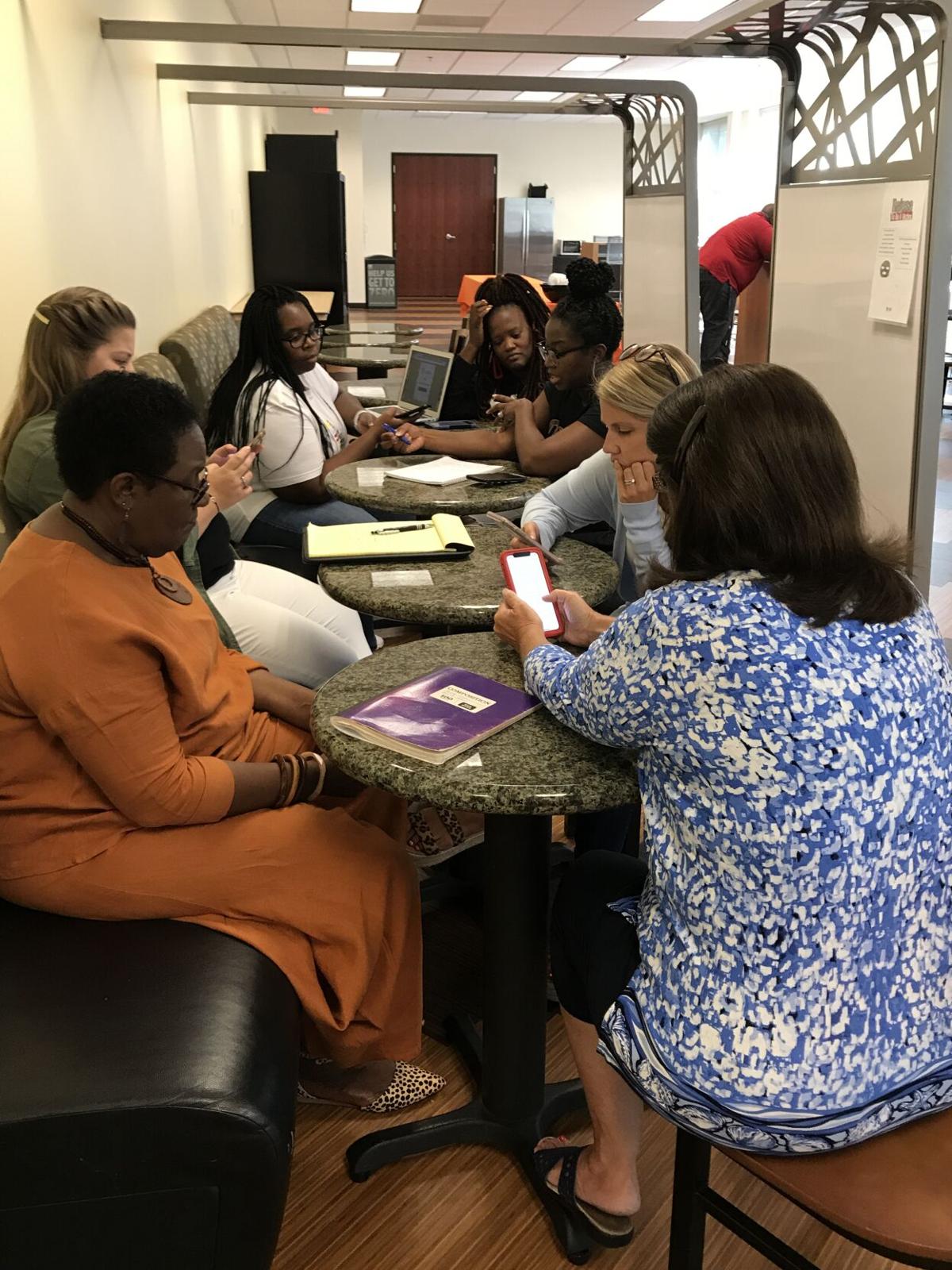 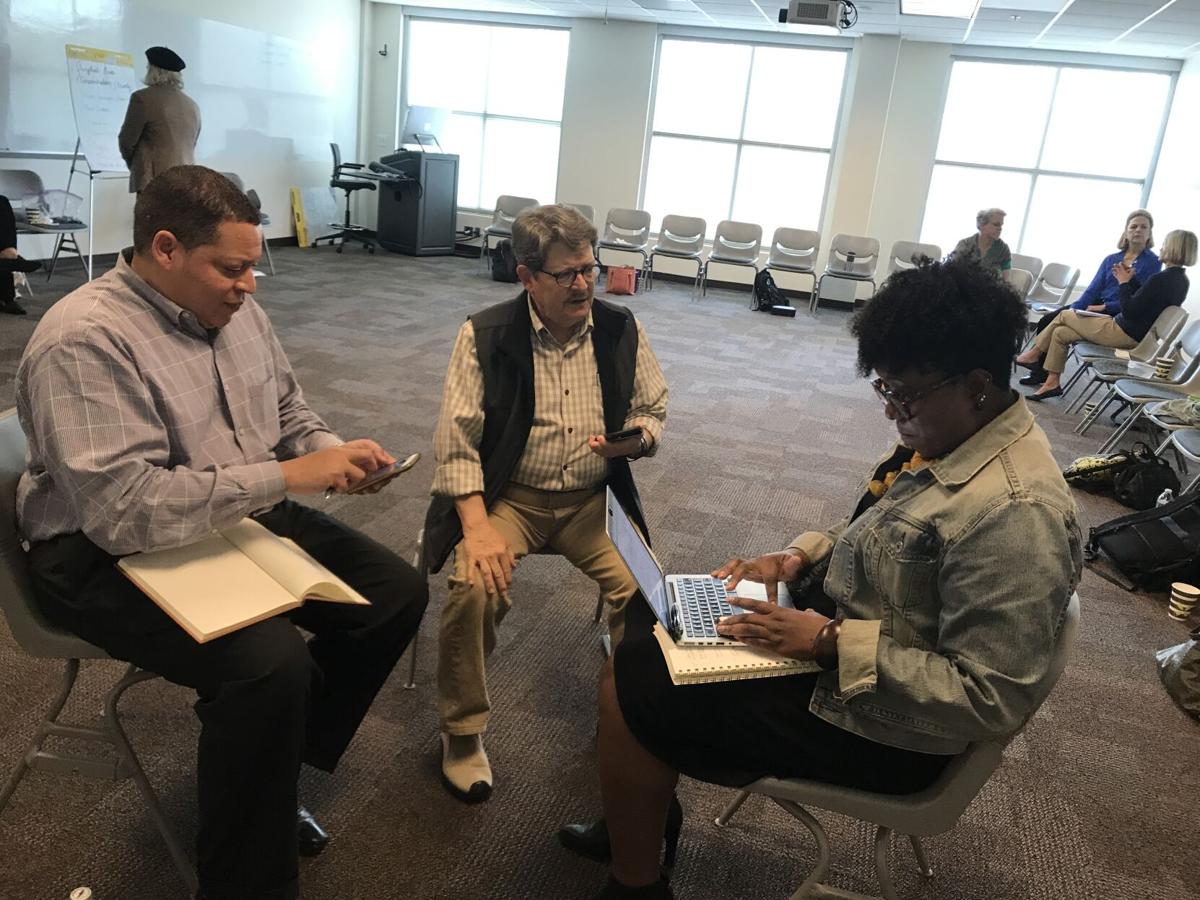 Frank Robinson (from left), Paul Garbarini and LaTisha Vaughn were among the participants in the REI workshop last fall. YWCA Greater Charleston/Provided 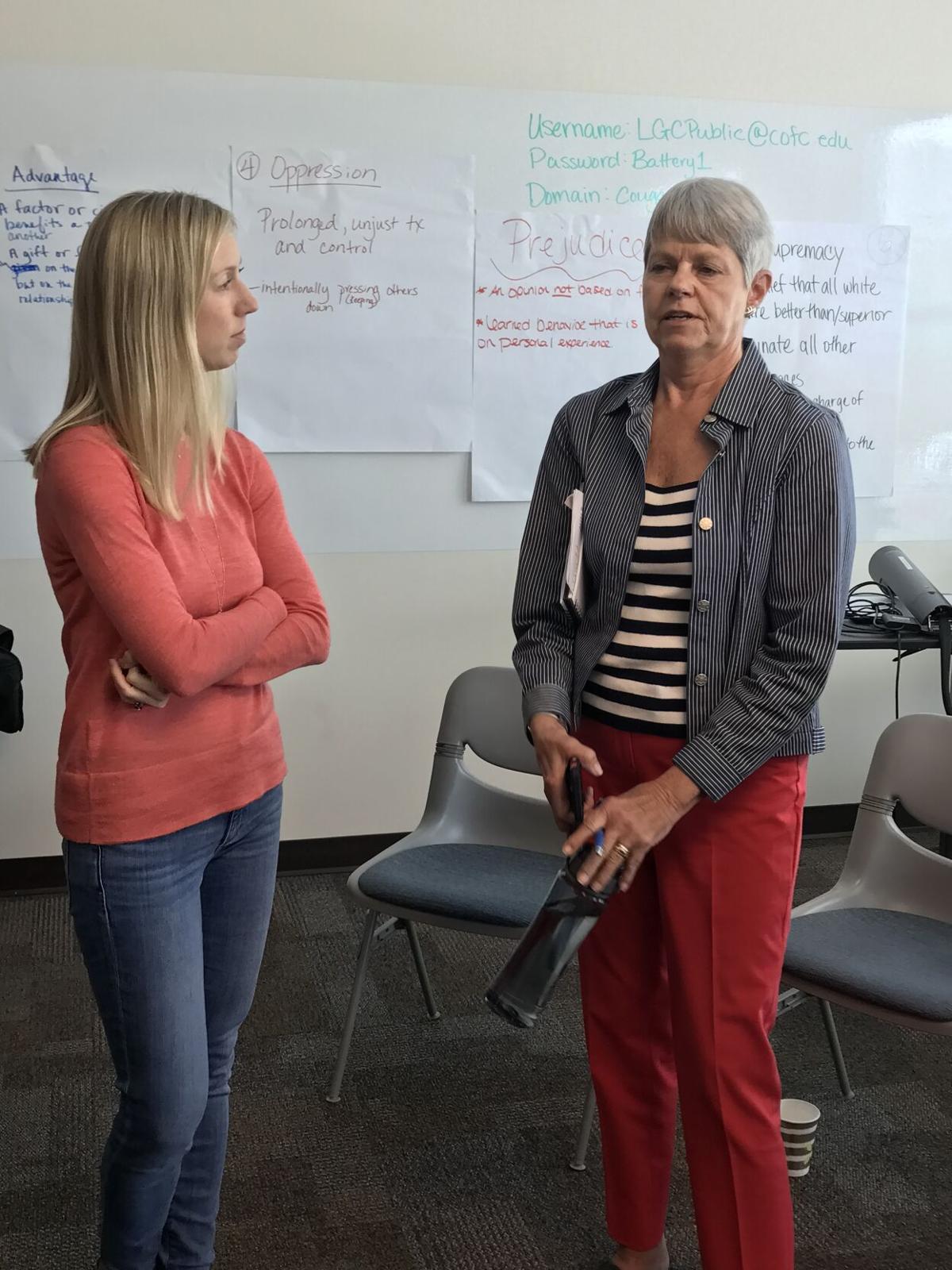 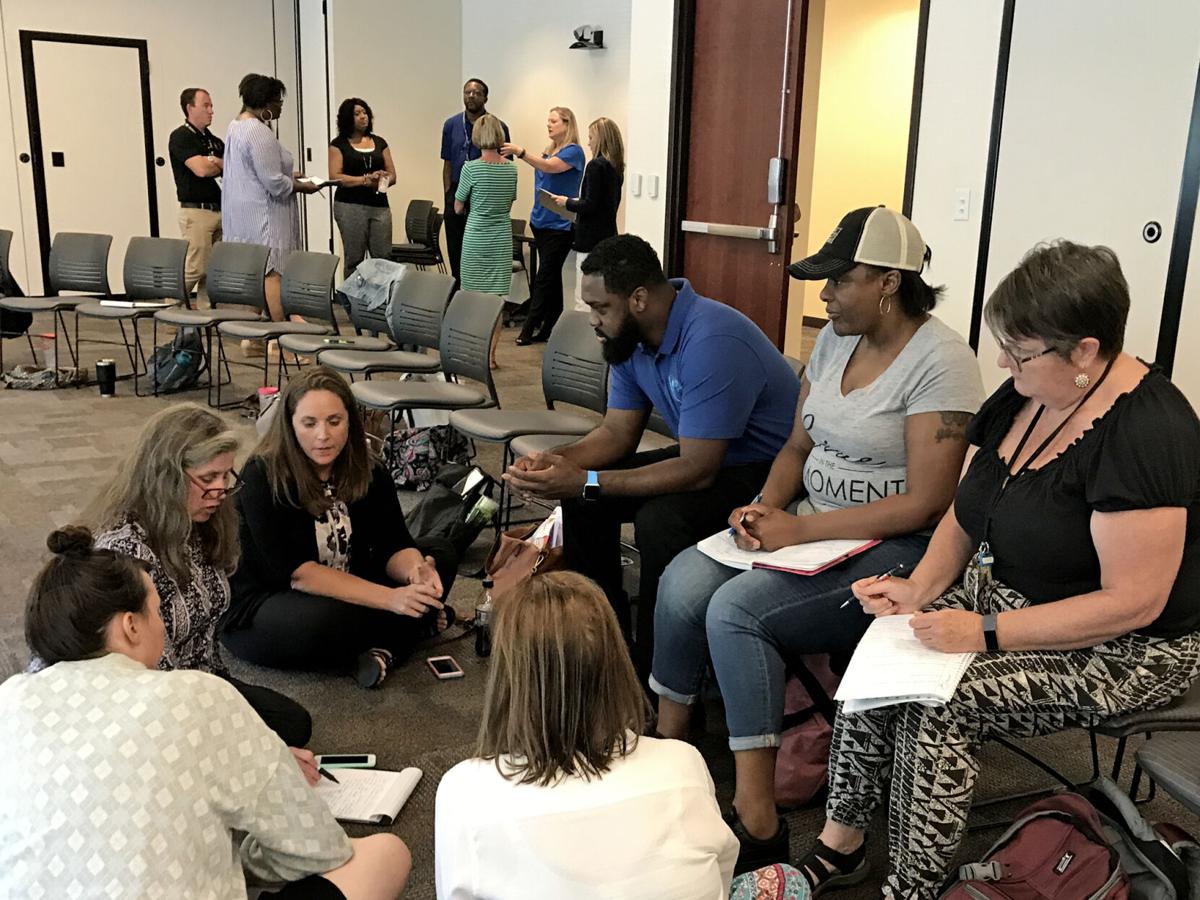 The REI workshop brings disparate people together for lots of interaction and participation. YWCA Greater Charleston/Provided

Janice Malone has been principal of Sanders-Clyde Elementary School for three years now. The school, located in the East Side neighborhood across from a public housing complex, serves African American students, though most of its teachers are white.

Malone noticed the disconnect right away. Many of the teachers were talented, devoted and well-meaning. Some were young people newly certified and eager to get to work.

But it’s not easy, Malone said.

“There’s a disconnect in that situation alone,” she said. The teachers want to make a difference, but they bring their biases and assumptions to the classroom, and those assumptions can get in the way.

When Malone heard about the Racial Equity Institute workshops offered by the YWCA Greater Charleston, she quickly concluded that this could help prepare her staff for the hard work of educating a population of at-risk children.

She partnered with the nonprofit Charleston Hope, which provided funding for the entire school staff to attend the three-day workshop last fall. Nearly all signed up. Malone was optimistic.

“They would get a deep understanding of race and racism in America, and how that affects their thinking and their place in life,” she said. “I wanted them to (get) the full perspective — the historical perspective — of how this country was built.” And she wanted to foster an ongoing open dialogue.

The Racial Equity Institute, based in Greensboro, N.C., creates structures to sustain anti-racist work, analyzes racism’s cultural and historical roots, consults with organizations interested in addressing institutional racism and rooting it out, and teaches anti-racism strategies to leaders in business, public service, education, the arts and other sectors.

The Racial Equity Institute, or REI, deploys instructors to communities with local partners that host their workshops and webinars. The YWCA embraced the programming in 2016 after LaVanda Brown became executive director.

Brown was looking for programs that had teeth, she said. Diversity training was fine, but it didn’t always pave the way to substantive change.

“How do we move toward actual racial harmony and racial equity?” she wondered.

When she attended an REI training workshop in Greensboro, she knew immediately she had found a solution, Brown said. Upon her return to Charleston, she sought local partners: Teach for America, Charleston Promise Neighborhood, Coastal Community Foundation, Metanoia, Tri-County Cradle to Career Collaborative and the Sofia Institute.

In January 2017, the YWCA hosted the first of what would become many REI workshops.

Initially, Brown assumed there would be one each year, part of the Martin Luther King Jr. week of celebration organized by the YWCA. But demand was too great, and soon her organization was hosting four or five workshops a year, then eight a year, then monthly sessions — until COVID-19 put a stop to it all.

Since the local onset of the pandemic in March, the waitlist has been growing, Brown said. And next month, the workshops will resume, albeit online.

Carol Jackson, a Charleston City Councilwoman representing District 12 (James Island), was among participants of the REI program in April 2019. She shared the classroom with several North Charleston Police Department officers and detectives. Chief Reggie Burgess, who attended the workshop on its first day, told the organizers he would try to send all NCPD officials through the program, according to Jackson.

She said she prepared, in part, by reading "The Color of Law: A Forgotten History of How Our Government Segregated America” by Richard Rothstein. And she was keen on discovering the nature of white privilege.

Jackson moved to Charleston two weeks after the Emanuel AME Church killings in June 2015 and immediately concluded she needed to better understand her new home town, including its ugly underbelly of racism. She ran for public office in 2017.

In the workshop, strangers gathered to get to know one another and create a space safe for honest interactions, she said.

“I thought that was part of the beauty of it,” Jackson said.

Common perceptions were challenged, historical blind spots filled in. Racial bias often is institutional, she noted. It poisons many working environments, not only police departments, and must be identified so it can be confronted in productive ways.

So Jackson said she will strive to make the invisible visible, and to share what she learns with others.

Recent events — George Floyd’s killing by police in Minneapolis and the subsequent protests and conversations — have served to generate more interest in the REI workshops, according to Tina Singleton, director of programs at the YWCA.

The virtual sessions (9 a.m.-5 p.m. over two days) will be offered twice a month, starting in September. The workshops are already filling up with participants from various parts of the local economy, including for the first time, the hospitality sector, Singleton said.

Anyone can sign up. The fee is $400 per person; limited scholarships are available.

The training is not about individual racial bias but focuses exclusively on systemic racism purposefully established to keep Black people marginalized, Singleton said. The workshop covers a lot of history, showing just how and when certain policies and practices were set in place.

“It gives people a common foundation, a common language, a common analysis to do their work,” Singleton said. “When they go back to their own working environment, they can be clearer about how the system operates.”

About half of the participants are sent by their employers and half come on their own volition, Brown said. Nearly all are glad for the experience.

“Some people who attend might think they know a lot, but they are always surprised at how much they don’t know,” she said. “There’s still a lot of learning to be had for all of us.”

Malone said that to break the cycle of poverty she witnesses at Sanders-Clyde Elementary School and the neighborhood in which it sits, her students need to be empowered by teaching them valuable skills. To do that requires teachers who are not only empathetic but informed about the socio-economic and historic forces working against the families they serve.

And to do that, teachers themselves need to be empowered with information that too often has been withheld or minimized.

Not all teachers are comfortable taking on this challenge, and that’s OK, Malone said. They can be reassigned to other schools.

“It’s very important for teachers to be in a comfortable environment,” she observed. “So part of this is getting buy-in.”

The REI workshop opened a doorway that many of her staff stepped through, Malone said. And the lessons learned continue to be applied.

“We continue to have conversation on regular basis during staff meetings,” she said. “It really helps us a lot.”

This year, Sanders-Clyde will introduce a new unit devoted first to the coronavirus pandemic and then to civil rights, the life and legacy of John Lewis and the Black Lives Matter movement. It will be interdisciplinary, incorporating history, music, dance and more, Malone said.

The unit will be called “Black Futures Matter.”

The annual Martin Luther King Jr. Celebration, organized by YWCA Greater Charleston, features an ecumenical service, business summit, parade, and blood drive. Because of the ongoing health crisis, events this year will be a little different.