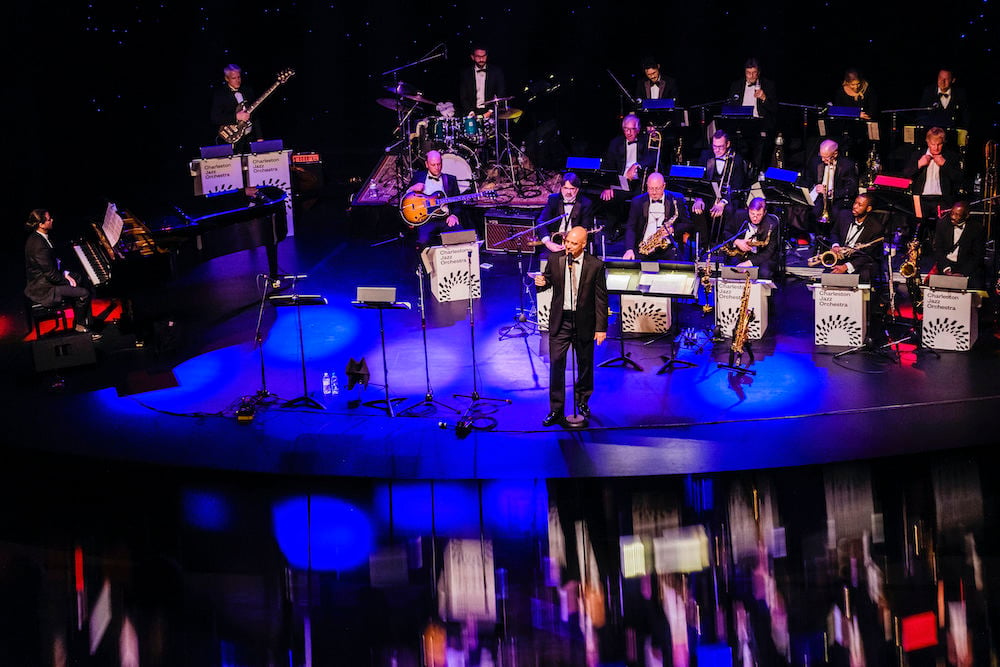 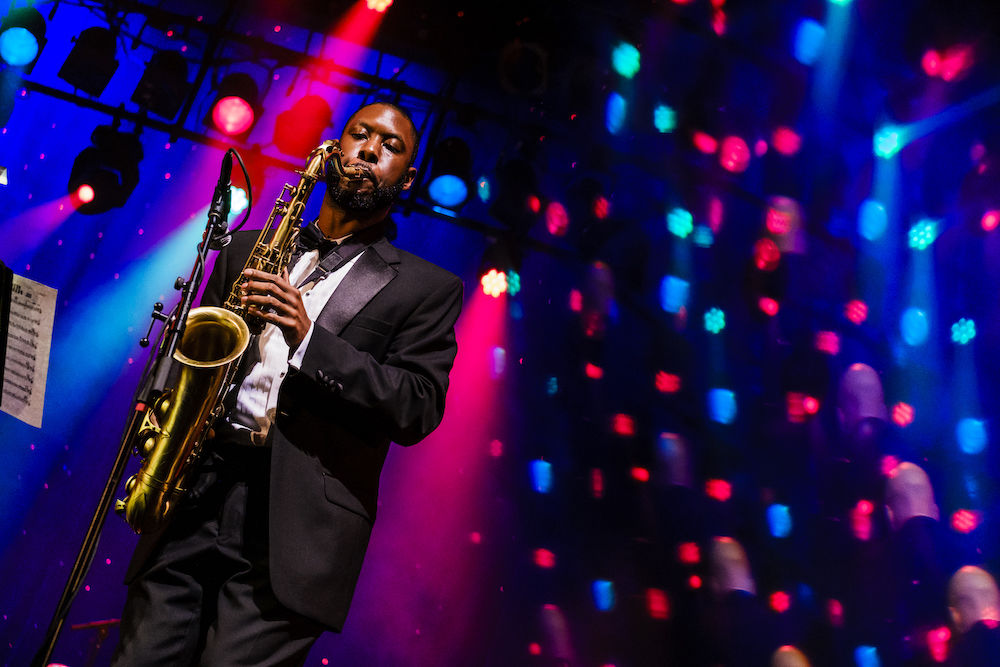 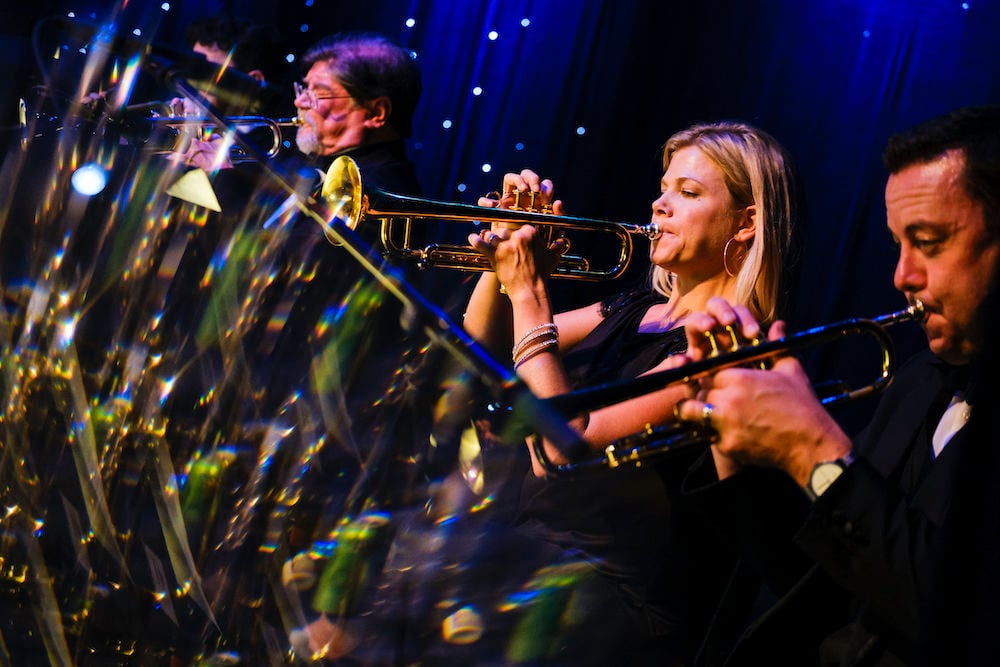 The trumpet line of the Charleston Jazz Orchestra. Raheel Gauba/King and Fields Photography/Provided 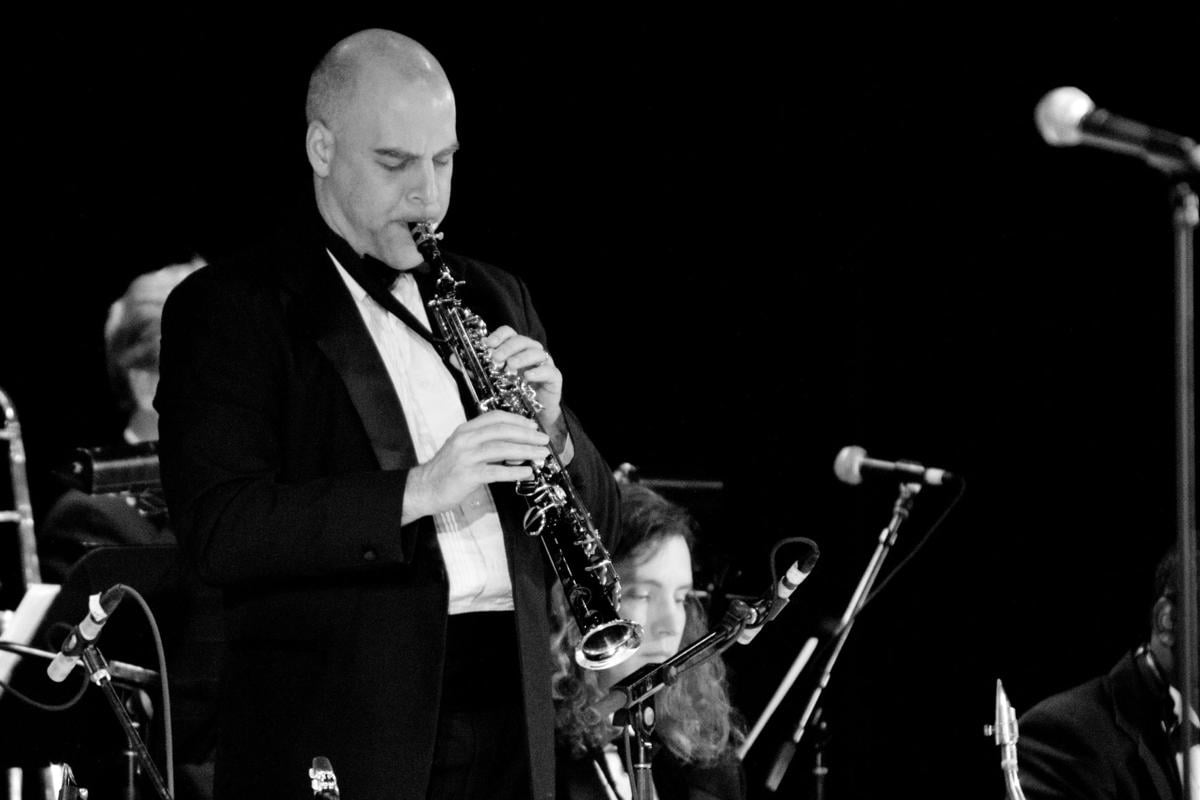 Robert Lewis on soprano sax, playing a solo at the 2013 CJO concert devoted to the music of John Coltrane. File/Tessa Blake 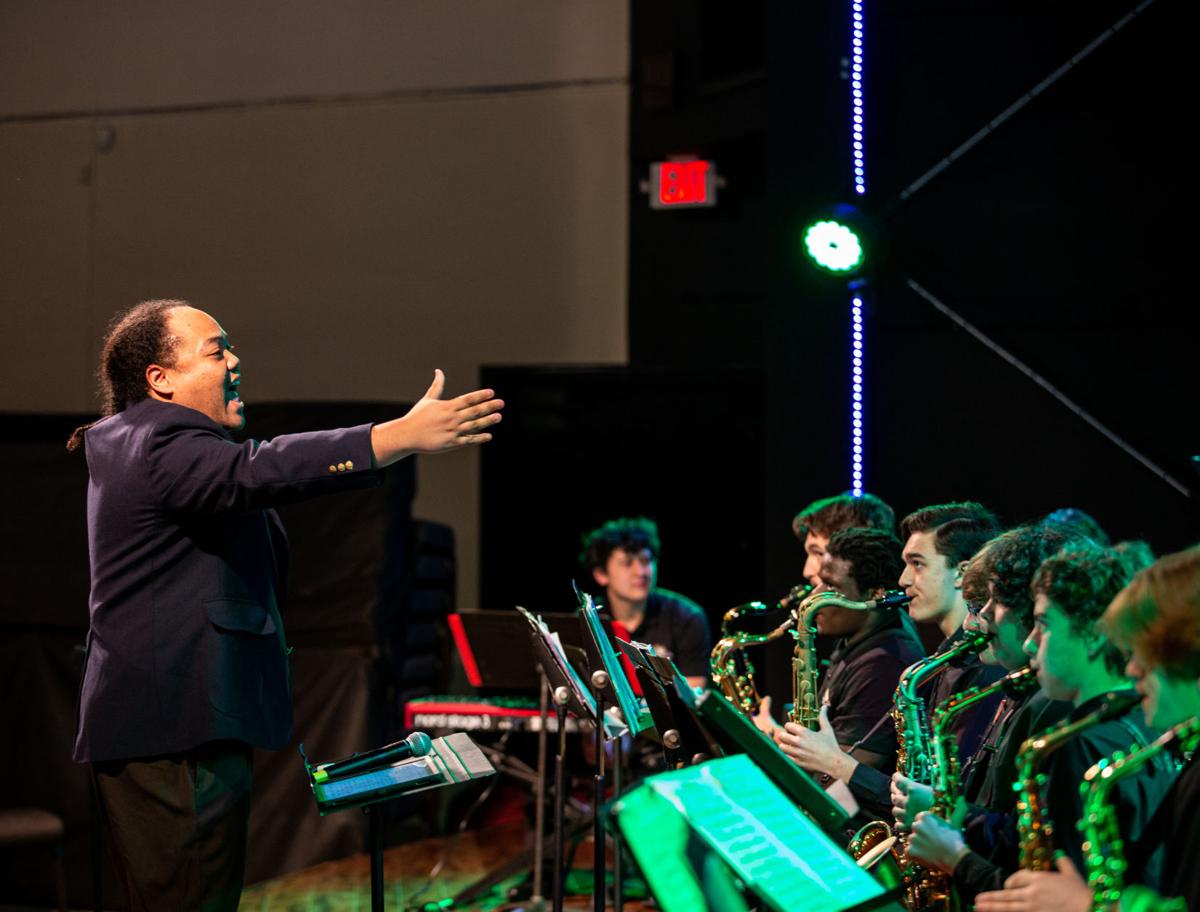 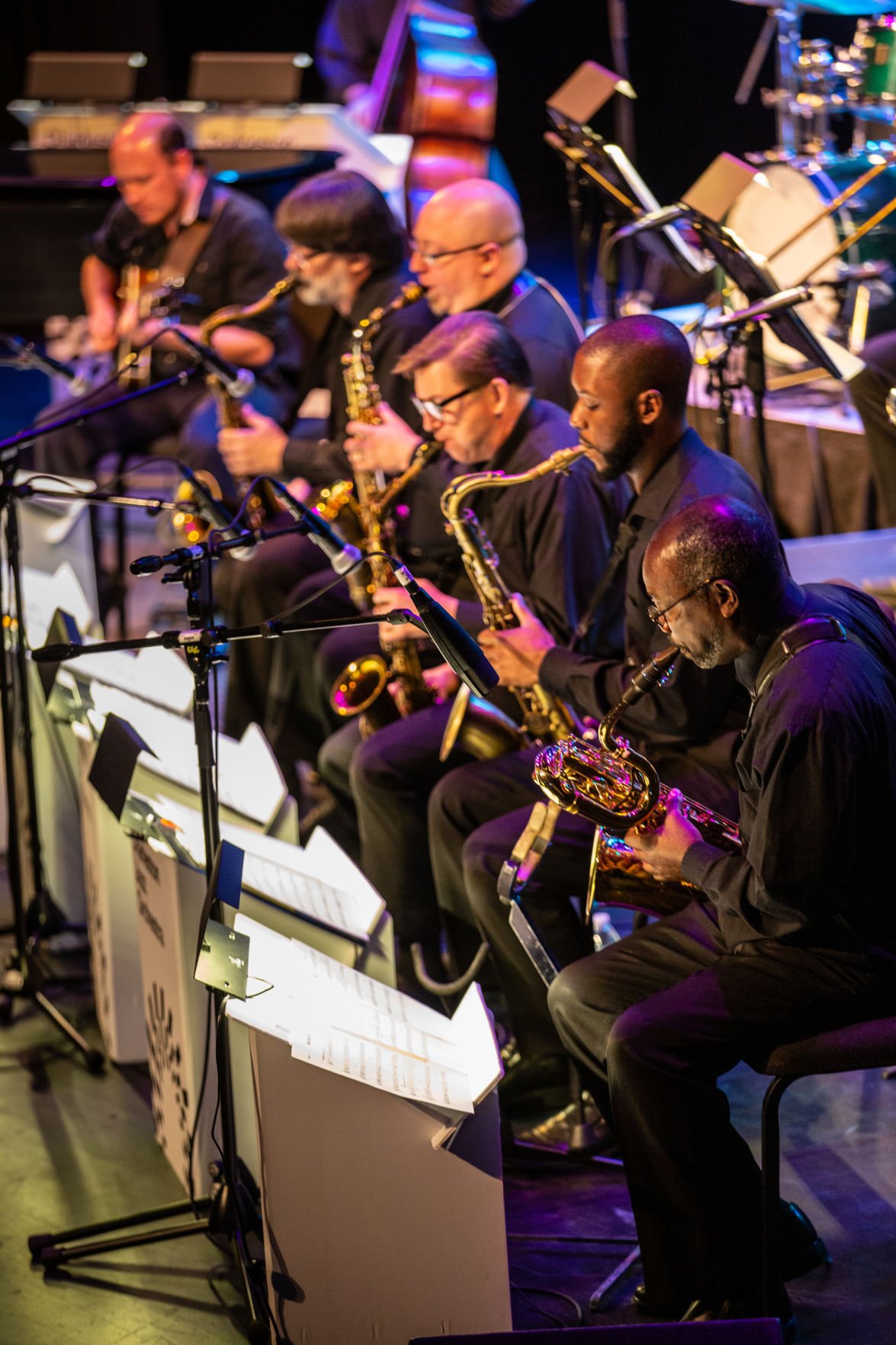 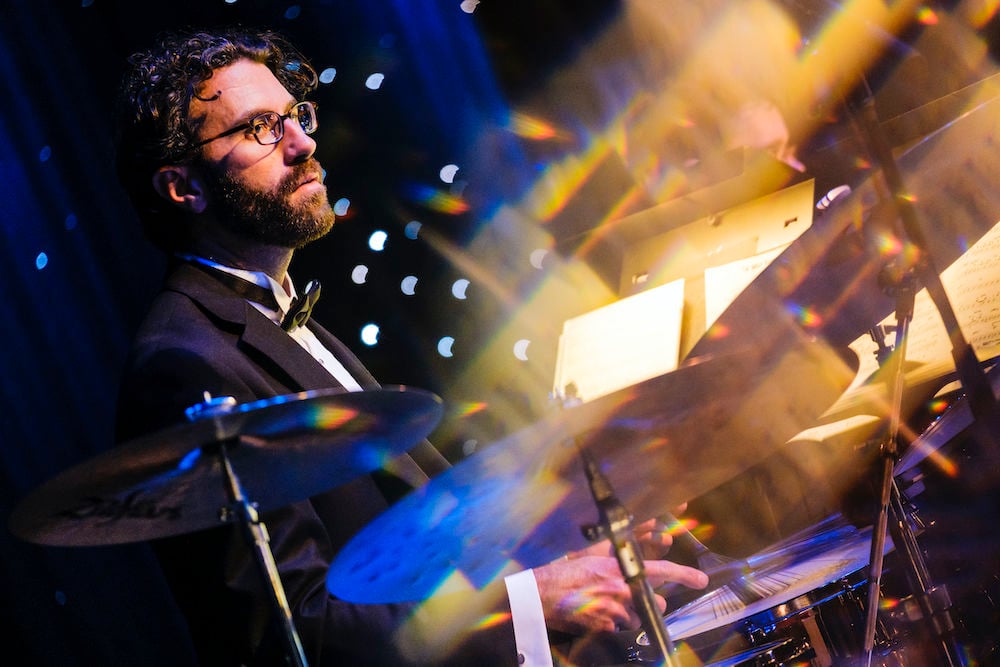 Ron Wiltrout on drums during a CJO concert. Raheel Gauba/King and Fields Photography/Provided 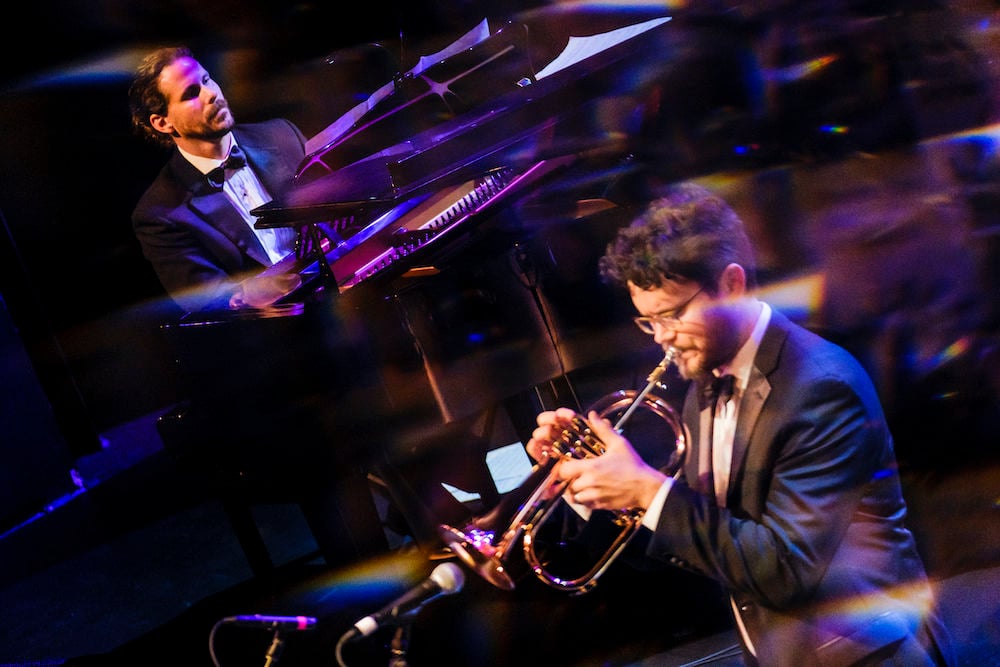 Gerald Gregory at piano and Matt White on cornet during a recent CJO performance at the Charleston Music Hall. Raheel Gauba/King and Fields Photography/Provided 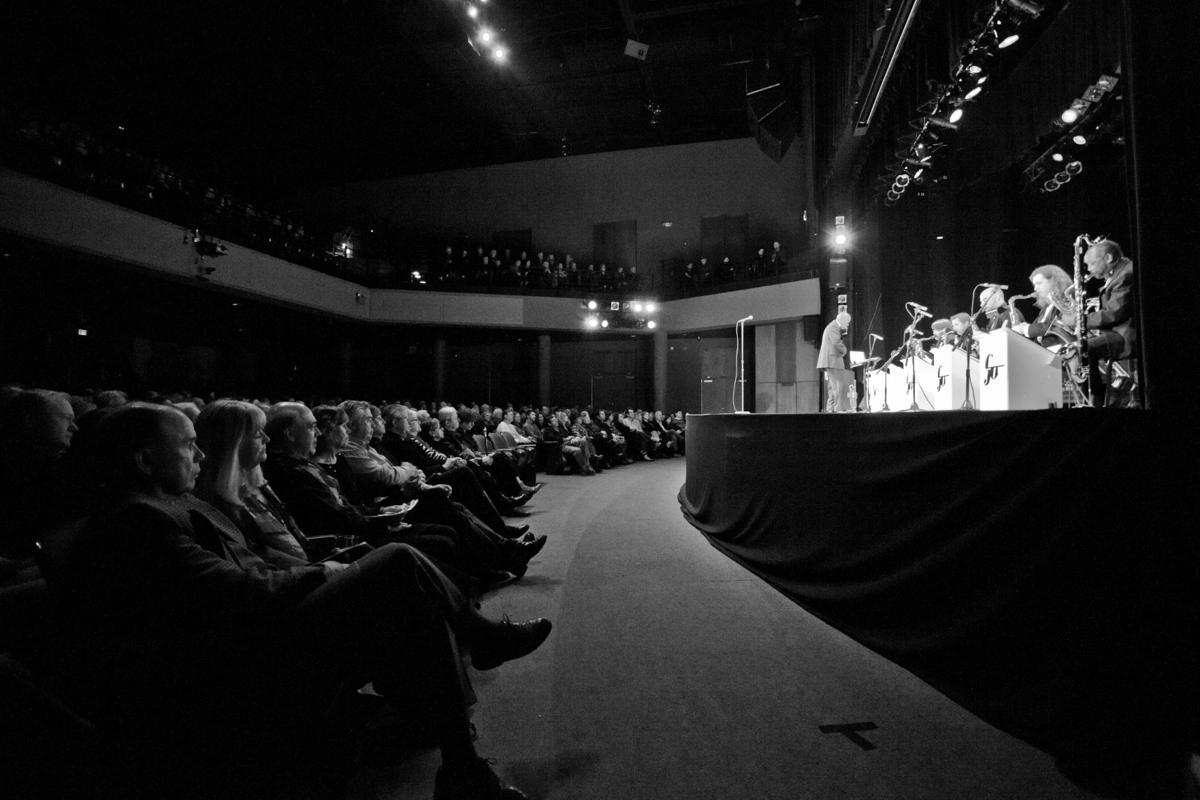 If you hear the word “opera” or “Shakespeare” or “jazz,” what associations come to mind? “Elitist” maybe. “Sophisticated.” “High art.” Right?

Here’s the thing: All of the performance art encompassed by those three words once was the opposite of high art.

Until the 20th century, operas were the Broadway shows of their time, and its patrons did not hesitate to express their opinions loudly.

In the Elizabethan era (and three centuries that followed), Shakespeare’s plays were popular entertainments that often alluded to contemporary concerns that peasants could understand.

And jazz initially was a boisterous hodgepodge of musical styles, a medium for raucous experimentation primarily derived from African American culture.

Today, many of us think of jazz — and of Shakespeare and opera — as out of our league. We dismiss it because we assume we won’t understand it. All those notes! All those fancy words! All that bellowing and swooning!

Jazz, especially big band jazz, is boisterous and rollicking. It gets toes tapping. It gets hearts pumping.

The Charleston Jazz Orchestra kicks off its 12th season on Saturday, Feb. 15 at the Charleston Music Hall, with two performances of a set devoted to the music of Duke Ellington, one of the most popular jazz artists of all time. The local big band will recreate — essentially note for note — the Duke Ellington Orchestra’s historic appearance at the 1956 Newport Jazz Festival, which breathed new life into the group during a period when small-ensemble bebop jazz had become dominant.

The program will feature 15 songs, performed by 18 core musicians.

During the original Ellington Orchestra performance at the Newport Jazz Festival in 1956, Duke offered a few old chestnuts, including reconceived versions of "Diminuendo in Blue” and “Crescendo in Blue," tunes from 1938. Ellington connected the two songs with a long improvisational section featuring tenor saxophonist Paul Gonsalves, who would play an exhausting 27-chorus solo — nearly six and half nonstop minutes — that drove the cheering crowd into a frenzy. It was a moment for the jazz history books.

And it gives the CJO a lot to live up to. But its fans are enthusiastic and growing in number. And a dozen years since its founding, the local big band has proven it has staying power.

Founded in 2008 by Leah Suarez and the late Jack McCray, with support from Quentin Baxter, Nathan Koci, Clay Grayson, Steven Sandifer and Regina Ruopoli, Jazz Artists of Charleston was the nonprofit vehicle that transported the orchestra’s driving sound across the city. Eventually, it would add an annual jazz festival, change its name to Charleston Jazz, merge with the Leonard School of Music, and expand its education programming and musical collaborations.

The CJO’s first music director was Charlton Singleton. In 2019, Robert Lewis, head of the jazz program at the College of Charleston, took over.

The organization’s first few years were a bit rough-and-tumble. McCray dug into his own modest bank account to cover costs, and the board stepped up to ensure things kept going. Suarez sought to balance innovation and musical risk-taking with the realities of managing a startup nonprofit.

In 2015, Mary Beth Natarajan replaced Suarez as executive director and brought on Brent Swaney, an Air Force veteran and musician, as director of performances. They helped solidify the nonprofit’s concert programming, educational offerings, and community outreach initiatives. In 2017, the organization merged with the Leonard School of Music and launched the Charleston Jazz Academy, hiring David W. Carter Jr. to run it.

Last year, Natarajan moved away from Charleston and development director Tatjana Beylotte, who previously was deputy director of the Halsey Institute of Contemporary Art, assumed the directorship.

Beylotte said her annual budget now is about $1.1 million, and $400,000 of it goes toward education. When she first came on board in June 2017, the Academy had about 20 regular students. Today, there are 150 taking lessons and playing in band, and most of them have scholarships, she said.

Carter said “Jazz Day for Kids,” a free CJO performance for students, is still going strong after eight years. In fact, it is expanding this year into a two-day collaboration with the Gaillard Center. Carter and Singleton will run a jazz camp in June, also at the Gaillard Center. And, thanks to a partnership with Spoleto Festival USA, the Academy hosts masterclasses by festival jazz artists, exposing students to some of the best musicians at work today.

The Jazz Pass program, which ensures young students can attend Charleston Jazz concerts at no charge, is funded by regular ticket buyers willing to chip in an extra $10.

In the last two years, Charleston Jazz has seen its audience grow by 28 percent, Beylotte said. About one-fifth of the crowd on any given night is from out of town. Lately, the CJO has ventured down to Walterboro in an effort to bring its music to communities that otherwise would not get a chance to hear it. The band performs annually on Kiawah Island, too.

During the festival last month, Charleston Jazz partnered with Forte Jazz Lounge, a new club on Upper King Street, to present local bands in an intimate setting. Each year, the organization brings a couple of headliners to Charleston for the festival, most recently, Regina Carter, Freddy Cole and Monty Alexander. In past years, guests have included Diane Shuur, Bobby McFerrin, Nnenna Freelon and Arturo Sandoval.

The CJO series consists of six shows (two sets each) at the Charleston Music Hall. Each program has a theme: either it features the music of a particular artist or it seizes on a certain style (Latin jazz, for example) or genre (movie music or holiday songs or the tunes of a favorite pop band). Lewis said he keeps track of all the ideas in a big spreadsheet.

A CJO concert is a little like a well-made Bloody Mary, with a few extra spices thrown in: It’s familiar and tasty, yet complex and exciting. It’s easy to drink, yet challenges the palate as it goes down your gullet.

The arrangements, many of which are brand new creations by members of the band, often invite careful listening, even when the tunes are well-known.

Take the April 2018 show, “All You Need Is Love: CJO Plays The Beatles.” The set included an unusual version of John Lennon’s “Dear Prudence,” arranged by Lewis, that began with solo electric bass, continued with Singleton playing the melody on trumpet as the band cushioned his solo with fat major chords, then gave way to a Charles Ives-inspired dissonant section. The band was layering themes, quoting another Beatles song, "Eleanor Rigby," and destroying any semblance of key. Then, suddenly, it was back to normal. The melody returned, along with those fat major chords.

The audience ate it up.

So is jazz high art?

“The music can be complicated, but I don’t think it’s inaccessible,” Carter offered.

And because just about any tune can be arranged for big band — including Ravel’s “Bolero” or arias from Bizet’s “Carmen” — it’s easy to appeal to just about any listener, Lewis added.

From the stage, he will share some interesting tidbit or provide a word of advice, perhaps suggesting what patrons should listen for, and that helps a lot, he said.

“Just a little bit of hand-holding and it’s a great experience, and they come back,” Lewis said.

April 18: The band will turn its attention to music from TV and cinema.

Oct. 17: The choir Lowcountry Voices joins the CJO in a concert of Gullah music.

Dec. 5: The big band ends its 2020 season with its popular “Holiday Swing” show.

For details and tickets, go to charlestonjazz.com.