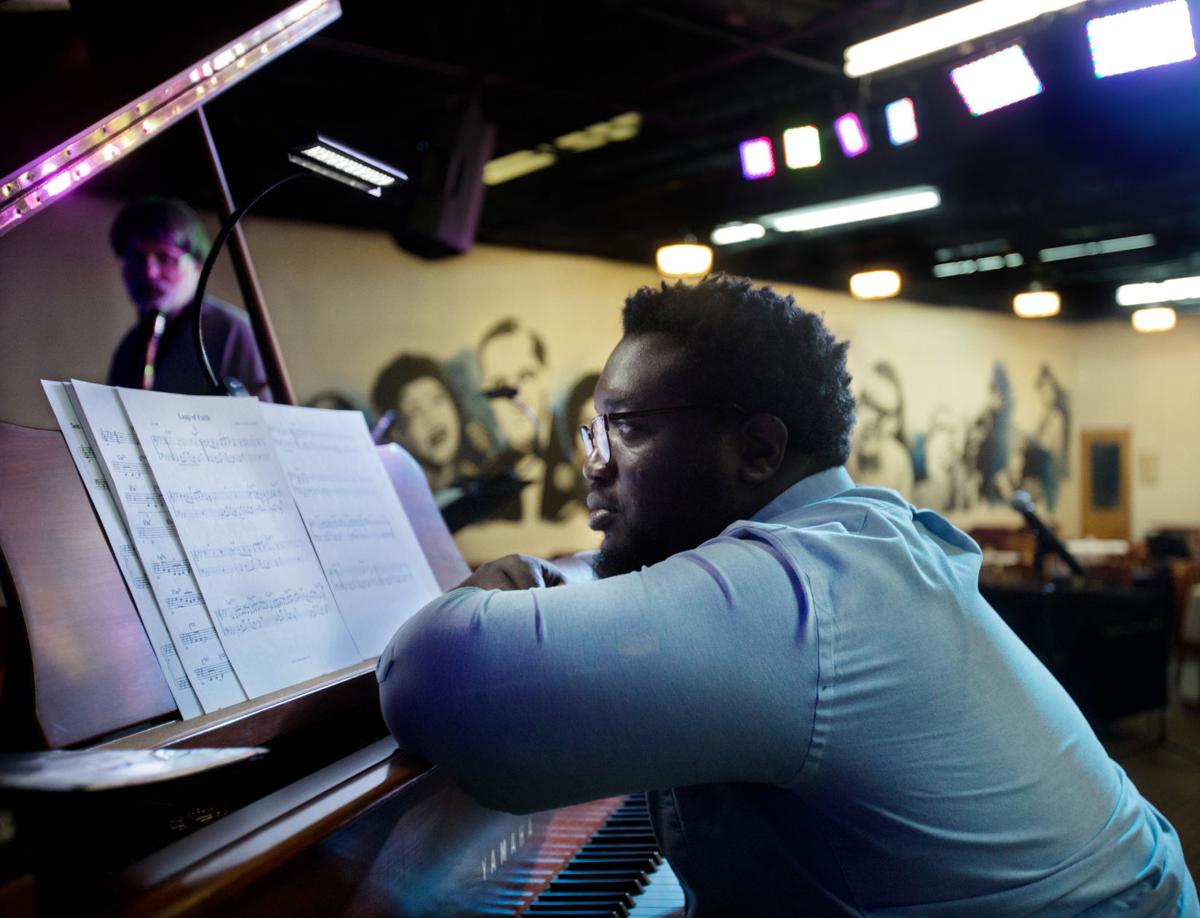 Demetrius Doctor reads over a piece of music while rehearsing with the Mark Sterbank Quartet at the Forte Jazz Lounge on Thursday, August 8, 2019, in Charleston. Gavin McIntyre/Staff 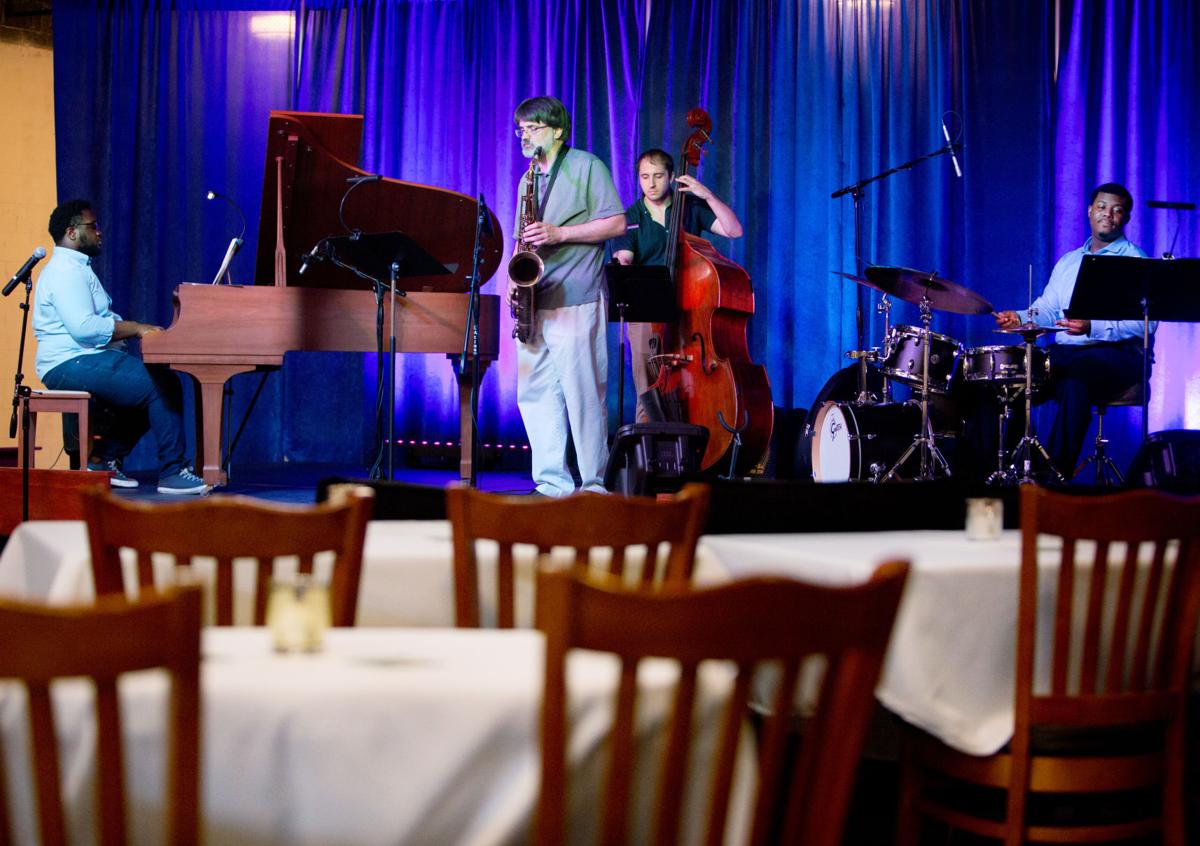 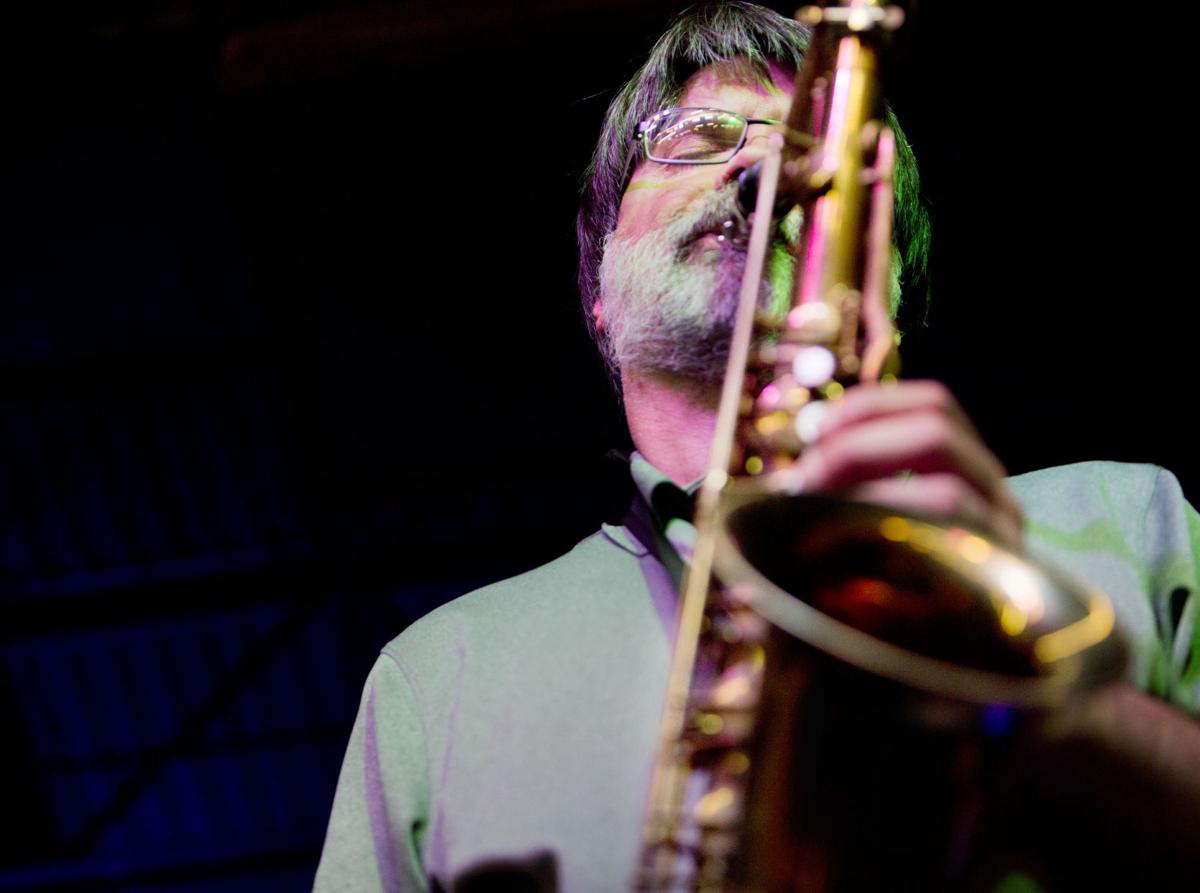 Mark Sterbank plays the saxophone while rehearsing with his quartet at the Forte Jazz Lounge on August 8, 2019. Gavin McIntyre/Staff 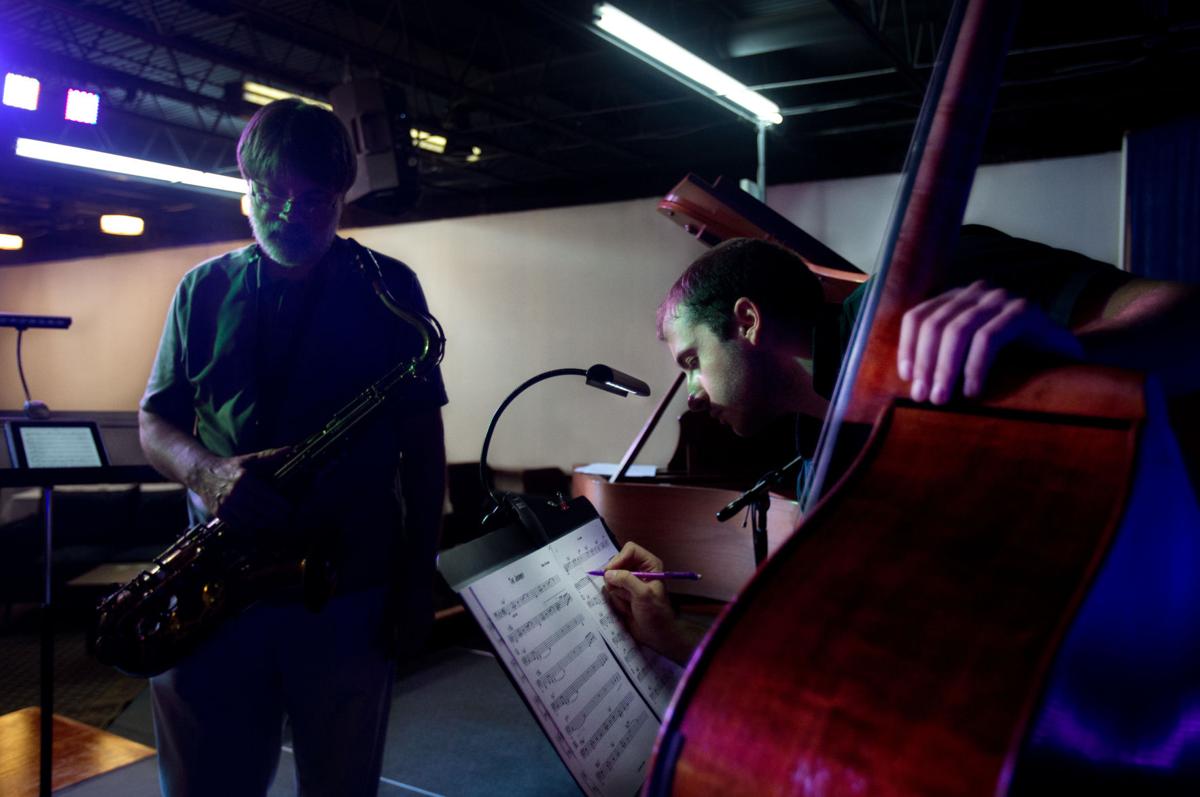 Brett Belander takes notes while talking to Mark Sterbank as they rehearse at the Forte Jazz Lounge on Thursday, August 8, 2019, in Charleston. Gavin McIntyre/Staff 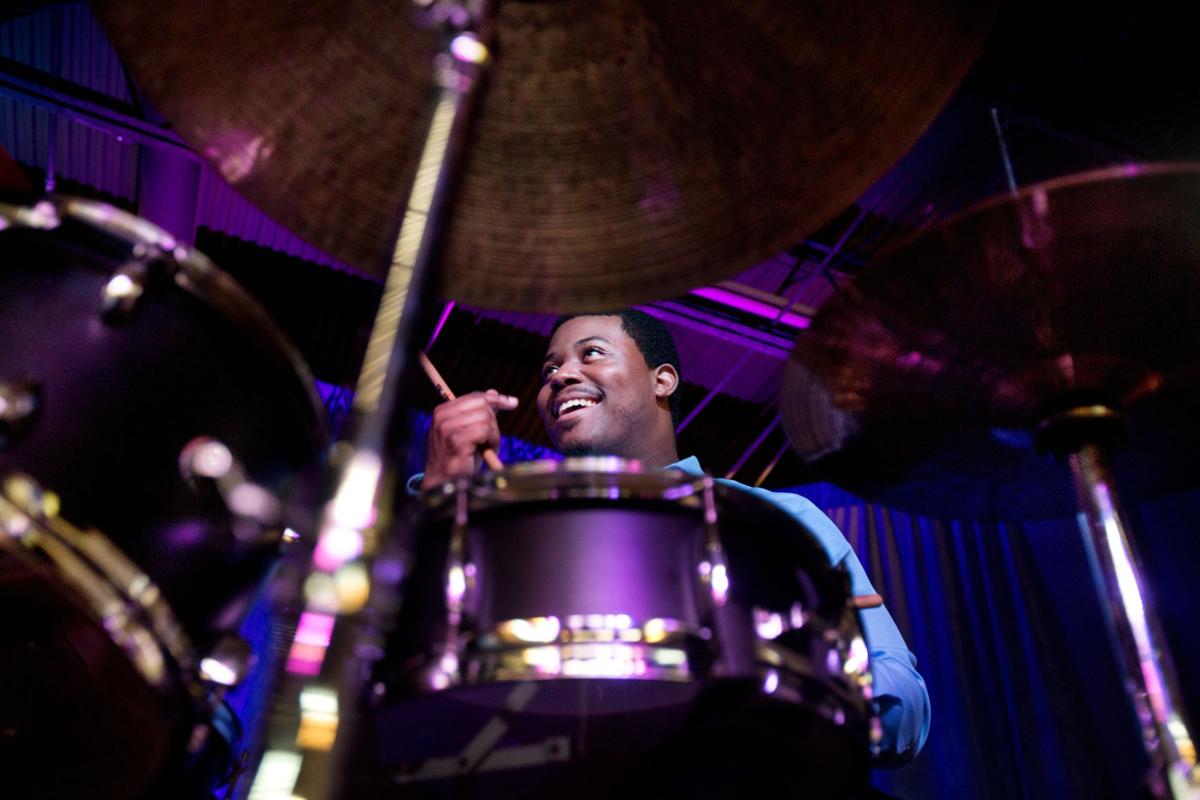 Edwin G. Hamilton laughs while rehearsing with the Mark Sterbank Quartet at the Forte Jazz Lounge on Thursday, August 8, 2019, in Charleston. Gavin McIntyre/Staff

It’s been tried before, with varying degrees of success, but eventually the musical ventures fizzle out.

Well, it’s time to have another go of it, according to singer and bandleader Joe Clarke.

He has opened a new jazz club called Forte Jazz Lounge at 477 King St., the space formerly occupied by Pure Theatre. Clarke has done this mostly to highlight local players, he said.

“We are dedicated to bringing out the best jazz musicians in Charleston,” Clarke said. “There is a big difference between hearing jazz musicians in a corner in a restaurant and on a stage talking about their passion.”

Forte Jazz Lounge will provide a stage for the area’s many professional musicians eager to perform for enthusiastic patrons, he said. It is equipped with 48 tables, a VIP section that seats 16, and 30 more general admission chairs. The club, which opened Aug. 1, will feature live performances every weekend, with established musicians offering two sets on Thursdays, Fridays and Saturdays.

Clarke, who teaches at Charleston County School of the Arts, said he plans to invite music students across the community to the club for Sunday afternoon masterclasses and Sunday evening gigs.

Local craft beers and imported wines will be available for sale, along with some snacks. But this is no restaurant, Clarke said. The main thing is the music.

He worked out a two-year lease with PrimeSouth to secure the space, the result of a chance meeting with the company's president, Chris Price, at The Dewberry when Clarke was playing a set there about six months ago. The two men recalled a conversation they had many years earlier just as Upper King Street was about to explode with growth.

At The Dewberry, Price asked Clarke: Do you think a jazz club would make it in Charleston?

Clarke responded: The short answer is no.

Not without a full commitment.

Not without a clear vision.

Not without a focus on the music.

Not without lining up all your ducks.

Too often in the past, music clubs sputtered and failed, Clarke said. But maybe circumstances have changed enough to warrant a dedicated jazz venue. Maybe they should give it a go.

They signed the lease in March.

Back in the 1970s and '80s, the epicenter of live music in Charleston was Myskyns on Market Street. The bar was a mecca for locals interested in good music of all kinds, including blues, progressive rock and small-ensemble jazz.

Eric Johnson played there. So did the Dixie Dregs and Dexter Gordon and the Ramones. It was a unique venue, racially integrated, featuring a courtyard where performers and patrons mingled. But Myskyns wasn’t a dedicated jazz club.

In the late 1970s, musician and politician Lonnie Hamilton III opened a nightclub on Market Street, and his group The Diplomats settled in as the house band, according to Jack McCray’s book, “Charleston Jazz.” But the club fell victim to real estate development and urban renewal projects, relocating to the second floor of Henry’s Restaurant, then closing in the 1990s.

Another club, Reno Sweeney’s, had a go of it in the early 1980s, but it only lasted a couple of years. Touch of Class on upper Meeting Street hosted jazz musicians for a while, too.

Spoleto Festival came along in 1977, presenting a jazz series. Soon after, Piccolo Spoleto Festival started, and, in 1984, the MOJA Arts Festival was launched. Both programmed jazz concerts. Small clubs fell by the wayside.

For years, jazz fans in town often spoke longingly of Myskyns and other venues, expressing a desire for a new dedicated jazz club. After all, they argued, Charleston was an important center of jazz whose musical history included the seminal Jenkins Orphanage Band. The city spawned several great musicians who found international success, and it was an important stop along the Chitlin’ Circuit during the days of segregation.

Mistral Restaurant on Market Street was among the longer lasting live music venues downtown, operating from the 1980s until 2010. Chef & Clef on Market Street featured live jazz every night in the late ’80s and early '90s. It even hosted Piccolo Spoleto Festival concerts. On Monday nights, the Oscar Rivers Quartet ruled. After it closed, the space became home to Mitchell’s, which also featured live music. Before long, the property would be called Bull & Finch, then Mercato, which began a vigorous trade in live jazz that lasted several years. But nothing stuck.

Meanwhile, over at Henry’s, Lonnie Hamilton kept things swinging on the weekends.

By the 1990s, the College of Charleston had developed a notable music program that accommodated young jazz players such as Tommy Gill, Quentin Baxter, Kevin Hamilton, Clay Ross and Robert Lewis. These musicians, and many others, found support and friendly audiences at several of the city’s restaurants at a time when the food scene in Charleston was maturing and restaurateurs wanted to add value to their offerings.

Some of these restaurants, such as Charleston Grill, FIG and High Cotton, became destinations for jazz fans seeking live music. But there was no denying that the music played second fiddle to the food and conversation.

Was it time for a new club?

The city got one in 1999. The Mezzane opened above Sermet’s restaurant on Lower King Street. Harold Singletary organized poetry readings at an open mic on Tuesday nights, warming up the stage for the musicians.

“That definitely set a high bar because of the amount of people we had out there on a Tuesday night,” recalled trumpet player Charlton Singleton. “It was insane. They were closing the bar and wrapping up at three in the morning.”

It didn’t last. The business case wasn’t strong enough. By the mid-2000s, the Mezzane was no more and FIG stepped up its trade in live jazz. Then Alluette’s Jazz Cafe came along, opening on Calhoun Street in 2009. It faltered, closing in 2011.

As drummer-engineer-producer Quentin Baxter gained experience and fame during this period, he began dreaming of a new Mezzane, eventually partnering with the people at Sermet’s to try again.

Marketed as an intimate “listening room” at which full-service dinners were available, it offered fine acoustics, good food and drink, and a platform for local and visiting musicians. Wycliffe Gordon played the room; Rene Marie performed there; Etienne Charles lit it up Caribbean-style.

But there was tension between musical and commercial goals, and by 2015 Baxter, and the many musicians he presented, were out. Clarke took over programming for a while, but The Mezz shut down not long after.

For a while, a couple of jazz enthusiasts, David Berger and Rob Rosenblum, operated How Art Thou Jazz Lounge on Maybank Highway near the Terrace Theatre. For years, the modest venue offered live music, then kicked into a higher gear in 2016 when Rosenblum moved to the area from New York and worked to lure nationally known veteran musicians. By the end of 2017, the experiment had run its course.

Since then, nothing. Until now.

A chance to show off

“Live jazz on a week-to-week basis at a standalone club is a hard ticket to sell in Charleston,” he said. “National acts that come through town will go to the Gaillard (Center) or Spoleto (Festival USA).”

Singleton took note of a strange irony: The city is big enough to attract big headliners but doesn’t seem to have a critical mass of local supporters to sustain quality jazz programming.

Dockery's on Daniel Island has been hosting dinner-and-a-show events featuring lots of jazz in the last couple of years. And the nonprofit Charleston Jazz has been producing or co-producing numerous small shows at various venues such as Barsa and the Gibbes Museum of Art.

Saxophone player Mark Sterbank, who performed at Forte Jazz Lounge on Saturday, struck an optimistic note. Charleston draws around 7 million visitors a year. Surely a few of them like jazz, he said.

“Charleston's a big tourist destination,” Sterbank said. “I think it’s just a vision issue. It takes a person with that kind of singular vision ... Lots of people are enthusiastically supporting jazz music in Charleston. I don’t think we’re suffering for audience.”

Nor is Charleston suffering for artists, Singleton said.

“There are tons of musicians in the region who can easily come in and play and woo the crowd, but getting the people in there, and putting the money out to get them there, that’s the hard thing.”

Clarke said an appealing jazz club can only bolster economic activity along King Street. Some patrons likely will take advantage of the restaurant options in the area, and eaters might want to venture into Forte Jazz Lounge to hear good music.

He’s managed to moderate startup costs by installing his own sound equipment and buying furniture from the Charleston Performing Arts Center, which recently relocated from James Island to West Ashley and was renamed the Cultural Arts Center of Charleston.

Now it’s all about showcasing local talent and building an audience.

“It’s an opportunity to show off in front of people who love jazz,” he said.