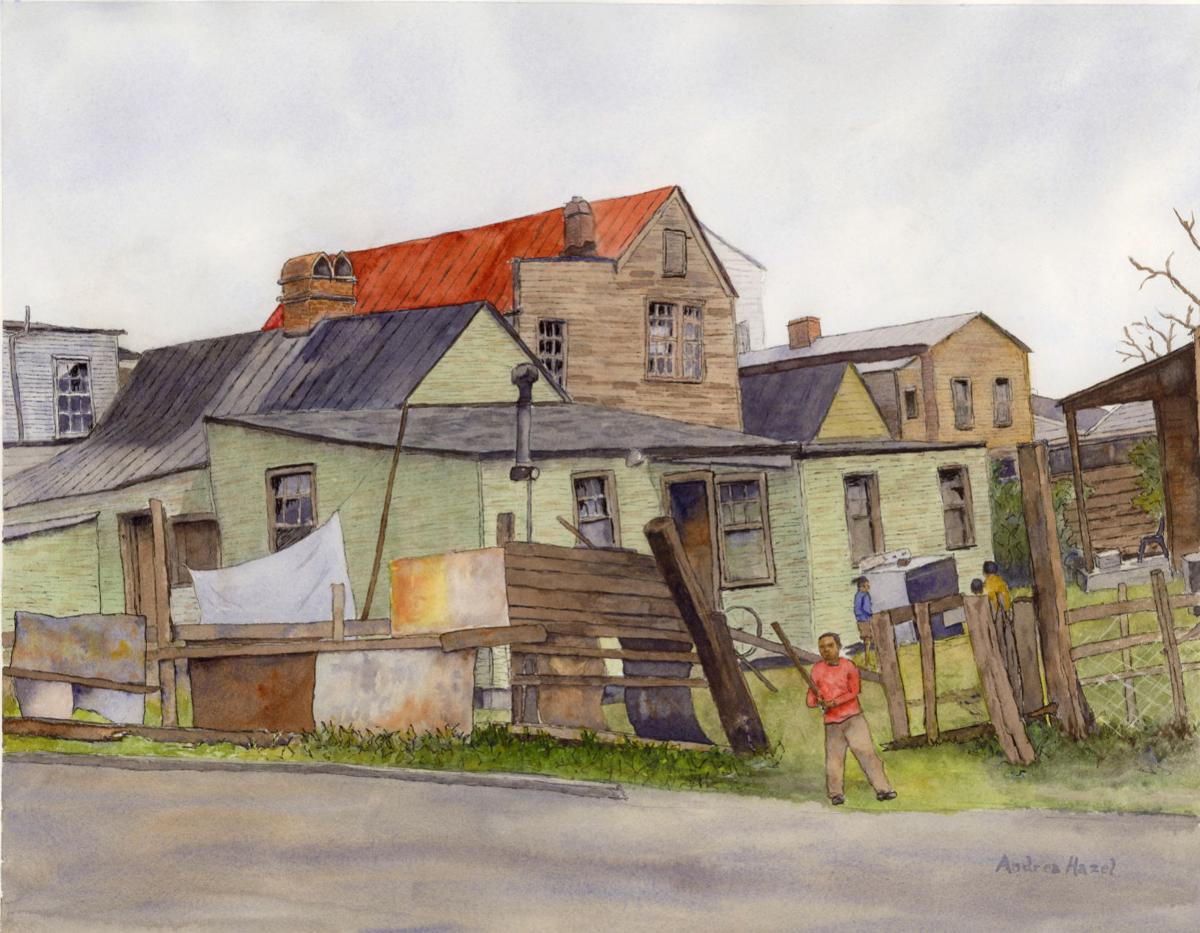 "Carry a Big Stick," a watercolor by Andrea Hazel, part of a series called "How It Was: Charleston in 1963." Andrea Hazel/Provided 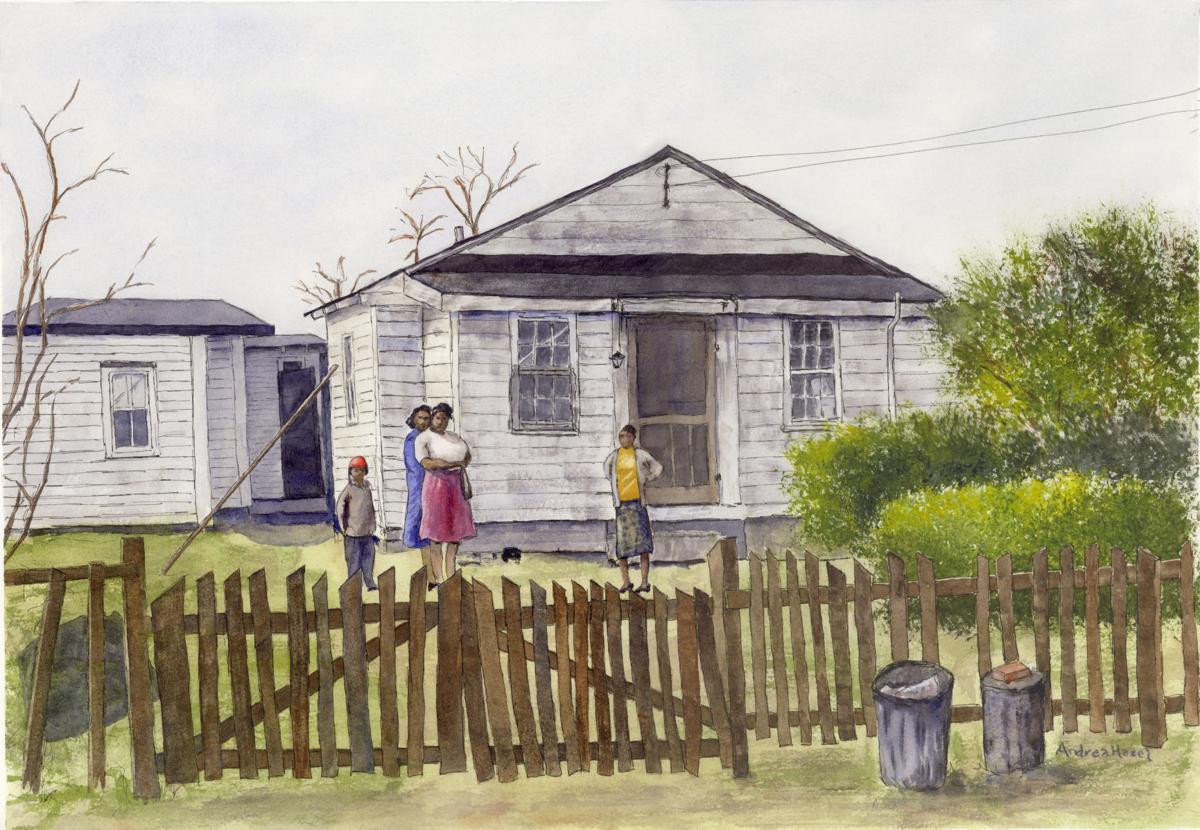 "Lookin' at Us," a watercolor by Andrea Hazel based on a photograph by the S.C. Department of Transportation likely taken in the early 1960s. Andrea Hazel/Provided 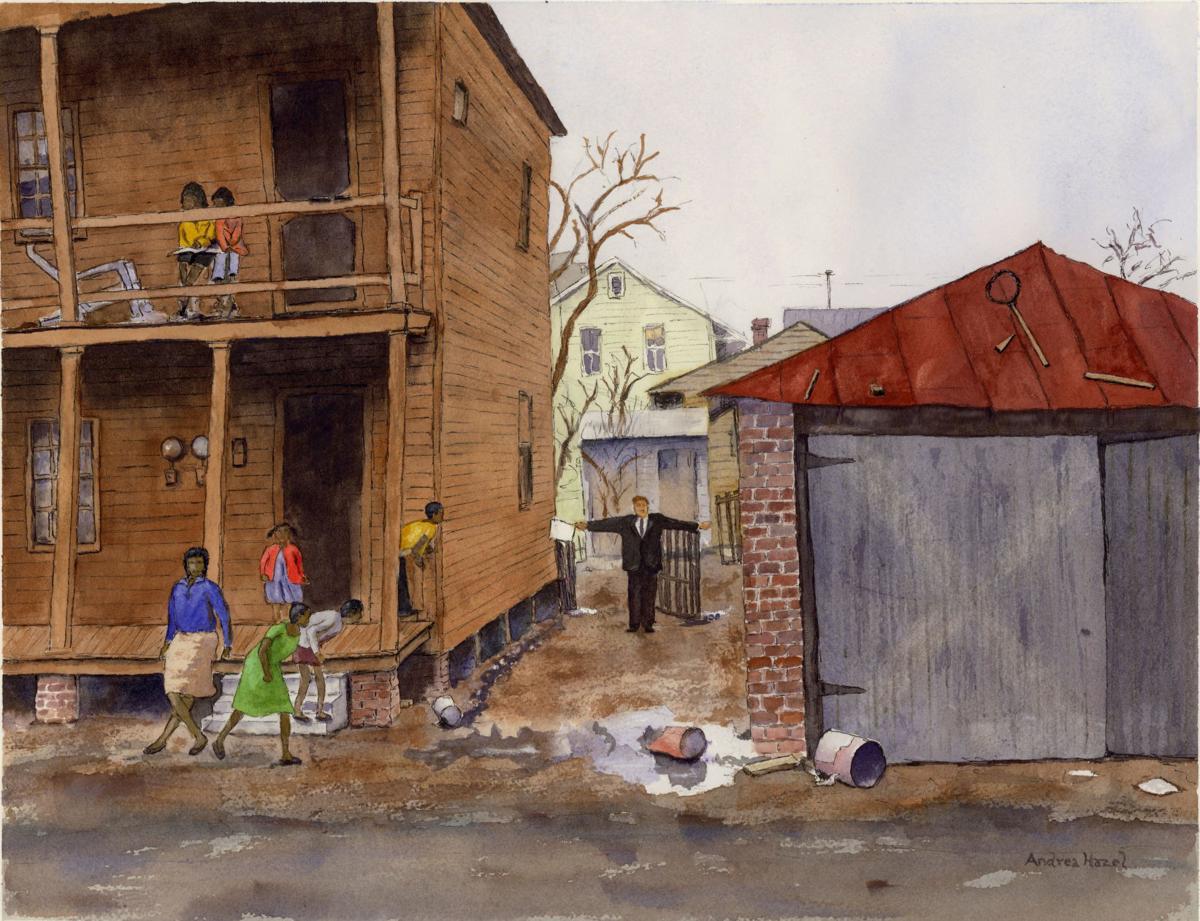 "Peepin'," a watercolor by Andrea Hazel, which captures a moment in the early 1960s when surveyors were determining which properties needed to be demolished to make way for Interstate 26 and the Crosstown. Andrea Hazel/Provided 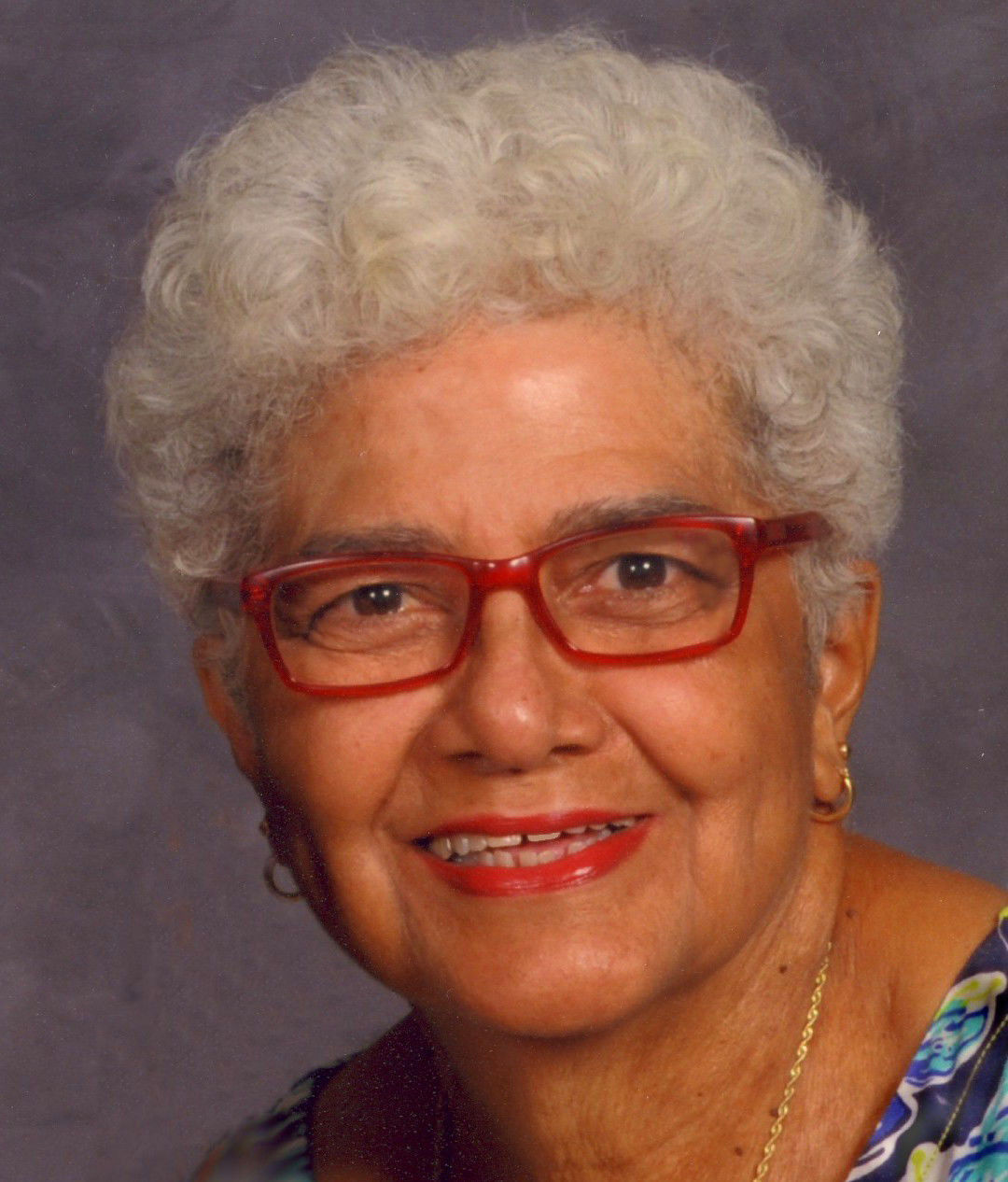 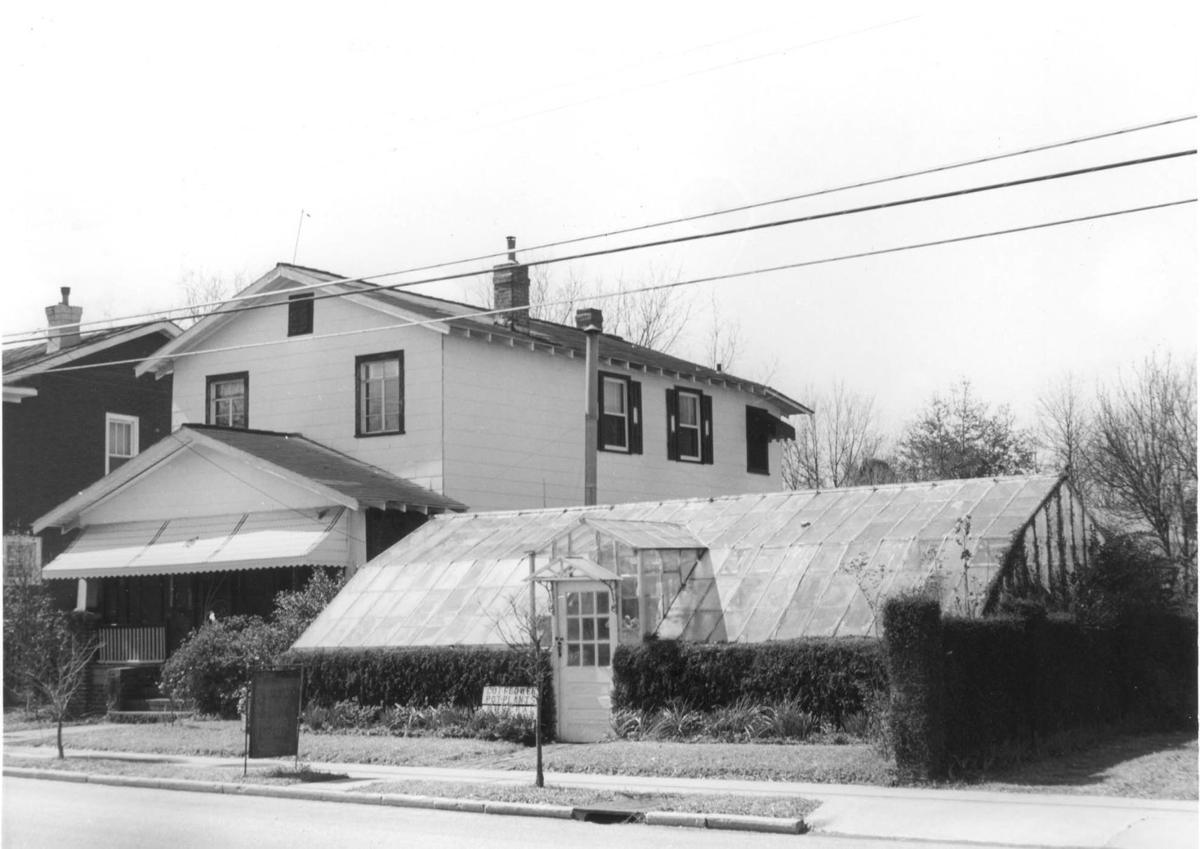 A photo of 1205 King St. taken by the S.C. Department of Transportation is now part of the Margaretta Childs Archives at the Historic Charleston Foundation. Provided 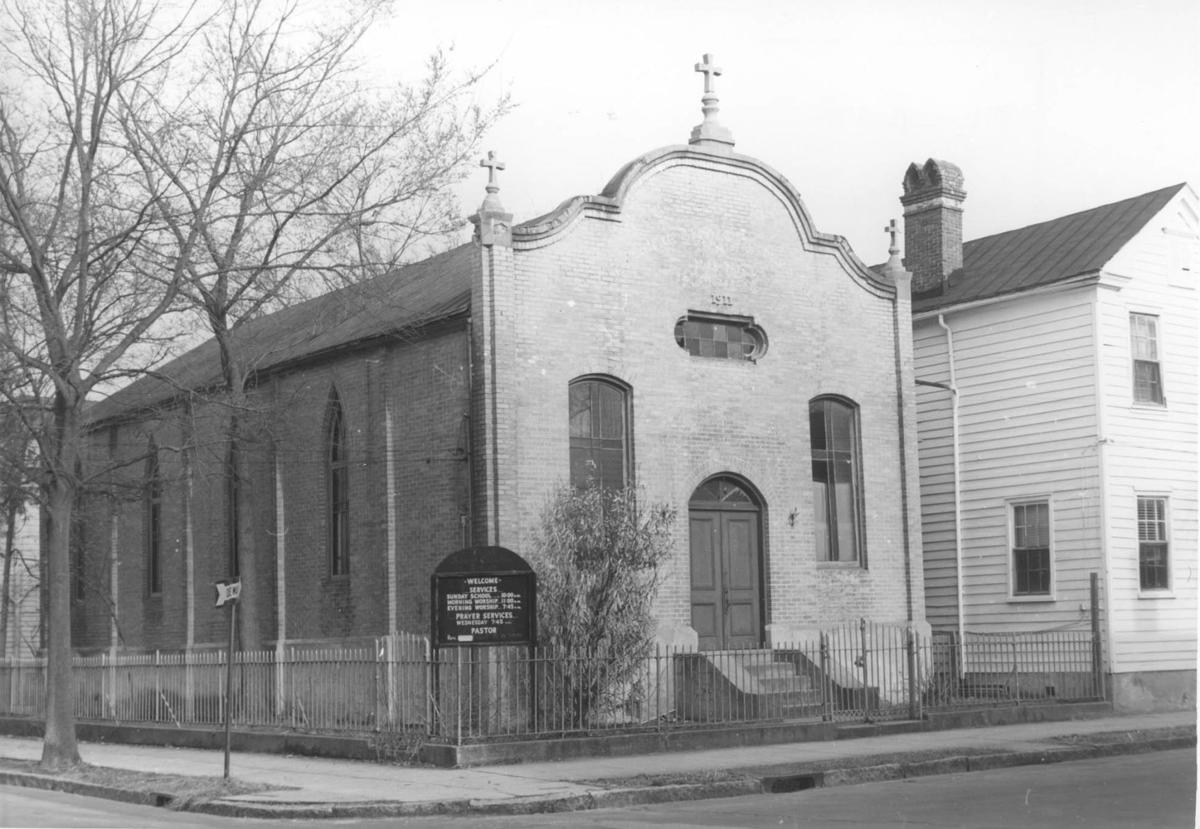 Advent Church was demolished in the 1960s to make way for the Crosstown. Provided 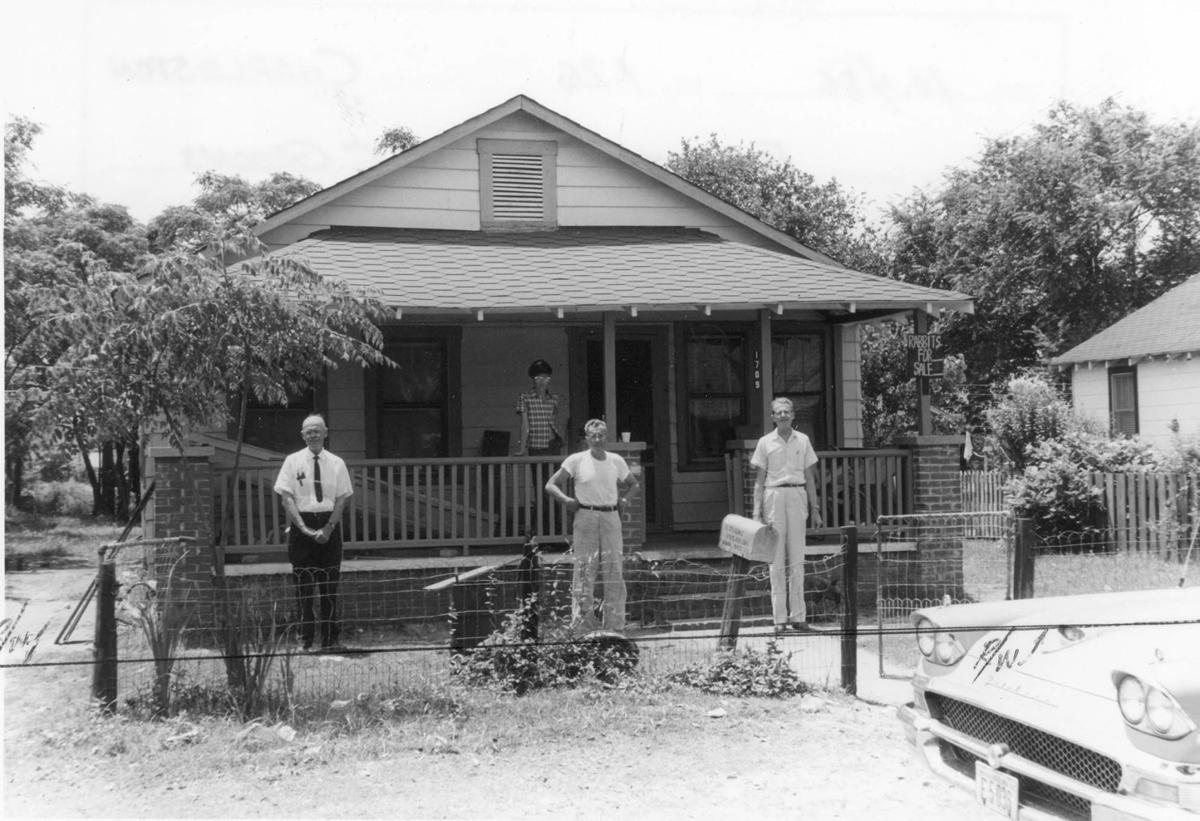 The home at 1709 Rivers Ave. was demolished to make way for Interstate 26. Provided 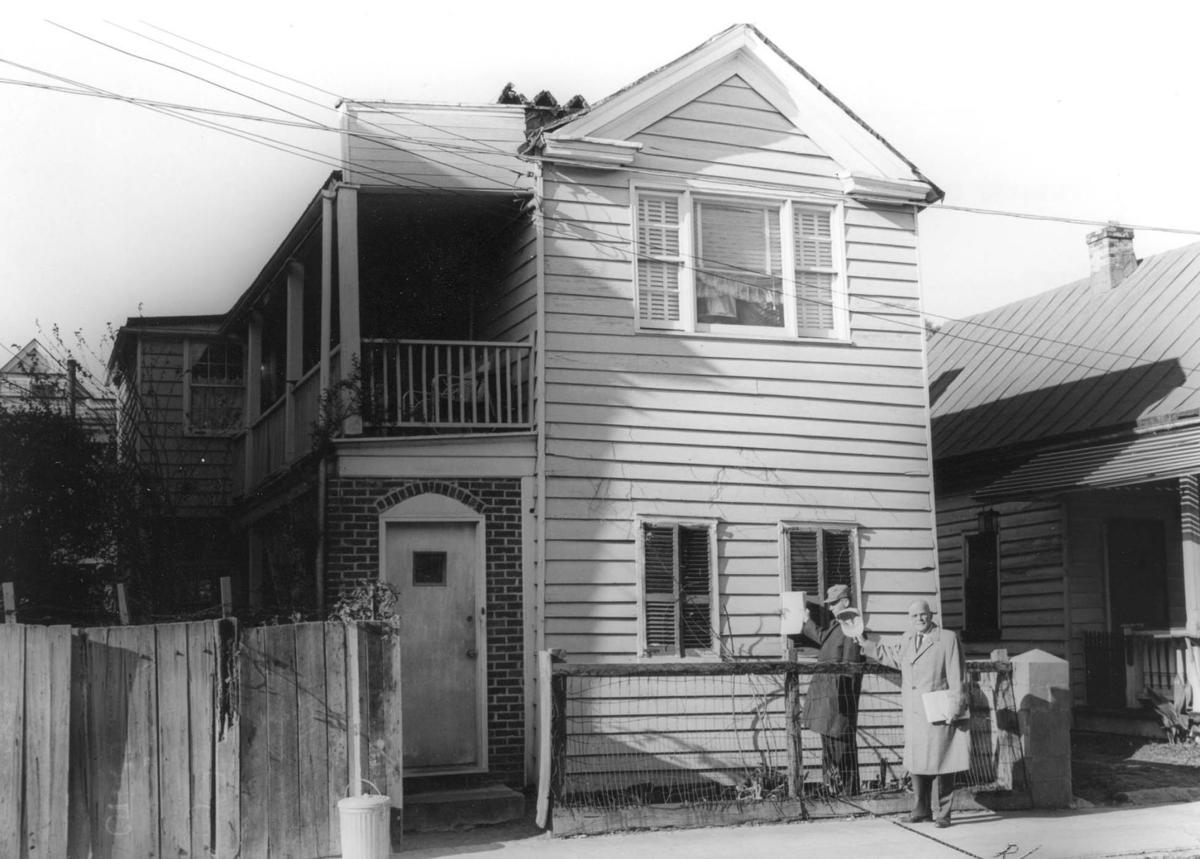 The home at 9 Todd St. was one of many that stood in the path of the future Crosstown highway. Provided 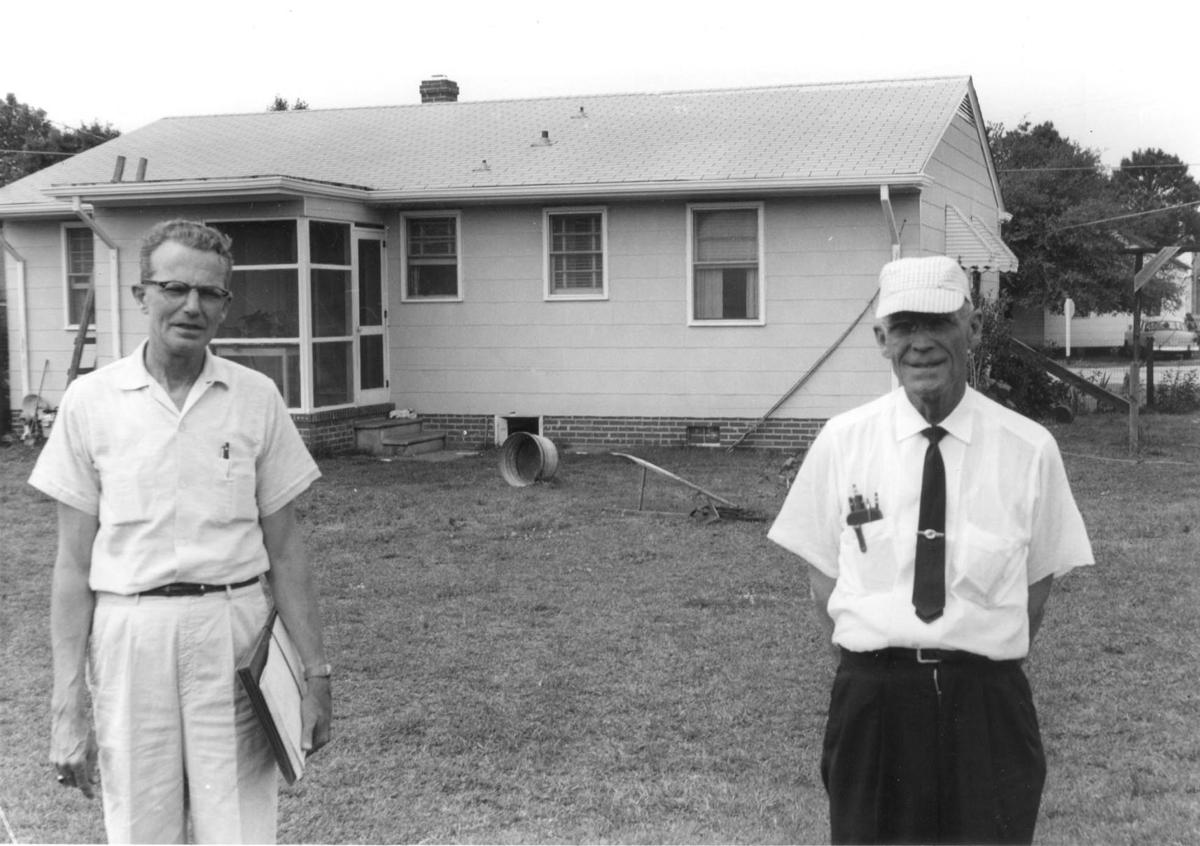 Two Department of Transportation surveyors in the early 1960s worked to determine the right of way for Interstate 26. Provided 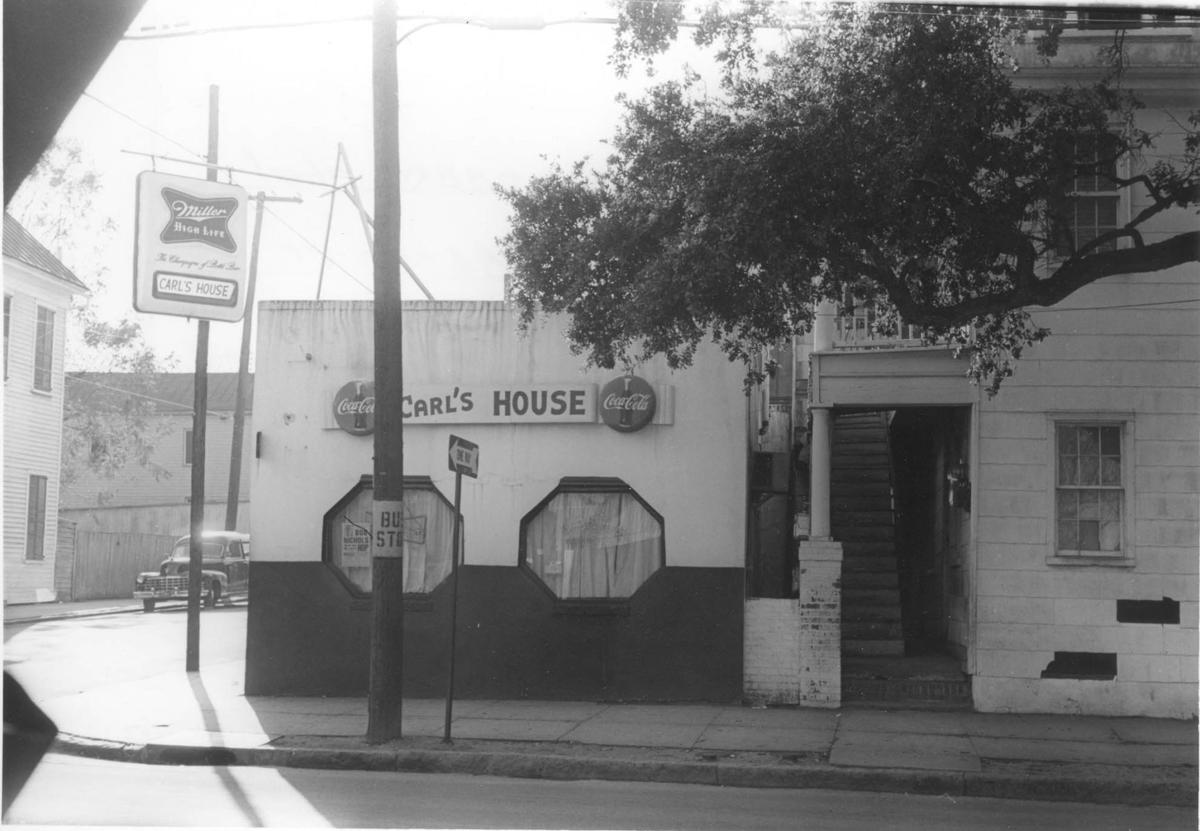 Carl's House was demolished to make way for the Crosstown highway across the upper part of the Charleston peninsula. Provided 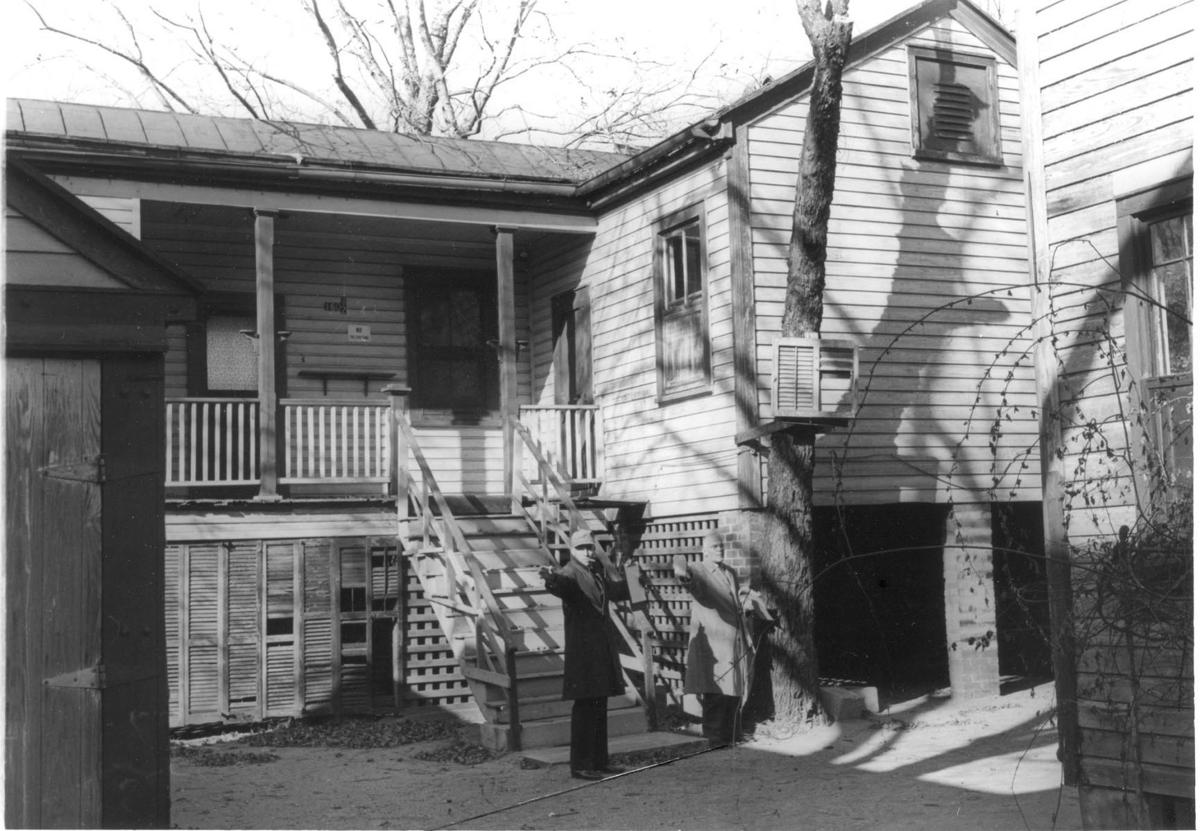 The home at 160 Line St. was removed in the 1960s so the Crosstown could connect Interstate 26 with Highway 17. Provided 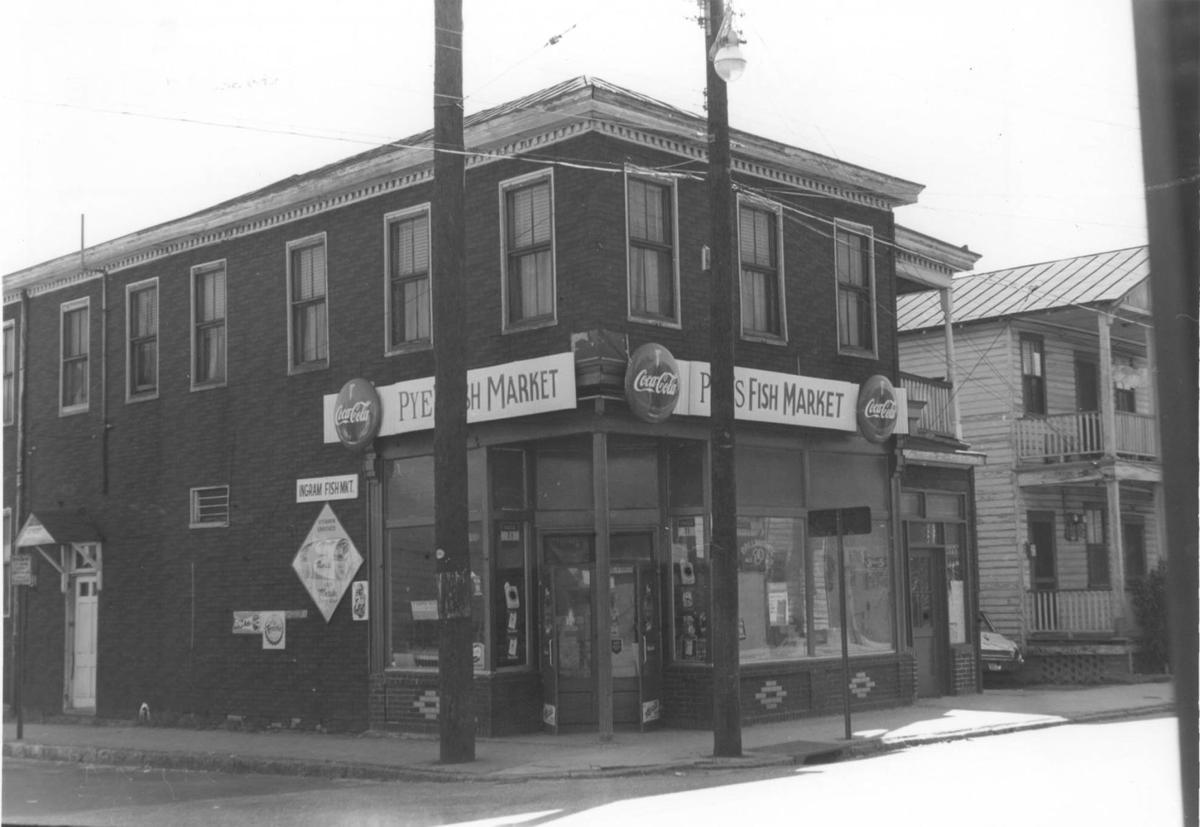 Pye's Fish Market was among the many casualties of the Crosstown project in the 1960s. Provided

"Carry a Big Stick," a watercolor by Andrea Hazel, part of a series called "How It Was: Charleston in 1963." Andrea Hazel/Provided

The home at 9 Todd St. was one of many that stood in the path of the future Crosstown highway. Provided

The home at 160 Line St. was removed in the 1960s so the Crosstown could connect Interstate 26 with Highway 17. Provided

Pye's Fish Market was among the many casualties of the Crosstown project in the 1960s. Provided

Andrea Hazel was a teenager when the highway was built. The road project required a wide clearance down the neck of the Charleston peninsula and then across to the Ashley River.

The problem was that this was a residential area full of houses. At least 150 of them would be demolished to make way for Interstate 26 and the Crosstown, constructed during the middle 1960s.

Hazel watched it happen from her home on Ashley Avenue.

She watched as the plans were laid and the bulldozers did their work. She watched as families were forced to seek refuge elsewhere.

She watched as old Charleston neighborhoods — Elliottborough, North-Central and the Westside, each full of single-family homes and small businesses — were ruptured by the roadway.

"Our church used to be on Sheppard Street,” she recalled. “Now it’s the Crosstown.”

The infrastructure project was completed by the end of 1968. This was the era of school desegregation, and white residents on the upper part of Charleston’s peninsula already were moving to the suburbs. The Crosstown project accelerated White Flight, depressing property values and exacerbating the city’s racial divide.

A few years ago, Hazel came across a trove of photographs kept in the Margaretta Childs Archives at the Historic Charleston Foundation. These were images of the soon-to-be demolished houses, many featuring the surveyors who assessed the properties and determined their fate. A few included homeowners: women drying clothes on the line, children playing in the yard, men wondering at the purpose of the clipboards and measuring tape.

Hazel was captivated by the pictures of her old stomping grounds, and decided to put her brush to work. She painted one watercolor, then another, then another.

“The idea was not to point a finger and blame, but to show what happened, and to remember these places,” she said.

She has made eight paintings so far in her series "How It Was: Charleston in 1963," and hopes to reach at least 20.

“It’s really a great thing she’s doing,” said Karen Emmons, archivist and librarian at the Historic Charleston Foundation. “To me, they bring the photos to life, so I get a sense of human beings living in those houses.”

Emmons said the entire archive contains nearly 2,300 images, of which 602 are of properties affected by the I-26 and Crosstown construction. All of the photographs can be accessed via the Lowcountry Digital Library (bit.ly/LostHomesChs).

It was tricky cataloging them all, she said. The photos, which were donated to the foundation by the South Carolina Department of Transportation, contained little identifying information. So the foundation partnered with Kevin Eberle, a professor at the Charleston School of Law and an obsessive amateur historian who has spent much of his free time chronicling the upper part of the Charleston peninsula, where he lives.

He wrote a book, published by The History Press in 2012, called “The History of Hampton Park.” And he gives walking and bicycling tours of the upper peninsula.

For the old DOT photographs to be useful to historians and others, the properties they capture for posterity needed to be explicitly identified, so Eberle cross-referenced them with historical maps, especially Sanborn maps, created by the Sanborn Fire Insurance Company to assess liability in urban areas.

The maps included enough clues, such as exact building footprint, adjacent fire hydrants, materials used, ingress and egress, to help Eberle locate nearly all of the properties in the DOT pictures.

For whatever reason, perhaps a half-dozen of the photographed buildings, “cheek-by-jowl up against the road,” managed to avoid demolition, he said. “But otherwise all of the buildings that they photographed ended up getting the bulldozer treatment.”

The conventional wisdom is that the affected area was predominantly black and the properties mostly dilapidated. This notion helped planners justify the infrastructure project, which would connect I-26 to Highway 17, in terms of urban renewal and improvement.

But Eberle is not sure there was any malicious intent. This was a middle- and working-class neighborhood that included white residents. Some of the housing stock was quite nice, some of it in disrepair. Some homes were modernized, others had no central plumbing.

What is certain is that African Americans were disproportionately impacted by the new roadway. Property compensation went to owners, not renters, and that left many blacks out in the cold, Eberle noted. They were less able than their white counterparts to afford a new single-family home in West Ashley or elsewhere, at a time when the size of the city was much smaller and housing options fewer. And those who remained in the neighborhood took a financial hit.

“Having a road in the middle of your neighborhood certainly is not going to drive up property values,” Eberle said.

Arguably, none of the affected properties had much historical value individually, he said. Collectively, though, the once-cohesive neighborhood was an essential part of the city’s character and identity. “The collective scope of the demolition ranks up there with (the loss of) the Charleston Orphanage and other examples (of) terrible, what-were-they-thinking demolition stories. The bulldozer industry must have had a banner year that year, because they were going whole hog knocking things down.”

“It’s a sad fact, but the not-as-wealthy neighborhoods, particularly African American neighborhoods, were not as well documented at the time,” Hastie said. “Recognizing the damage that was wrought by these infrastructure projects is important.”

He said the effort to create a new greenway, called the Lowcountry LowLine, along a portion of the I-26 right of way is meant, in part, to acknowledge the damage that was done and reconnect the streets cleaved in two by construction of the highway.

Hastie, a member of the LowLine’s board, said he and his colleagues want to “document the story and use the project as a way to stitch back together the neighborhood.”

'What the devastation meant'

Walter Boags, a tour guide, bartender and cousin of Andrea Hazel, said he lived on Ashe Street between Coming and Rutledge avenues in 1963, when many of the DOT photographs were made. He attended A.B. Rhett Elementary School, then Burke. To get to his all-black school, he walked past the all-white Mitchell Elementary.

By the mid-1960s, some African-American families relocated from the peninsula to a black subdivision on James Island called Westchester.

“I knew the coming highway would be very big and impactful,” he said. “I wasn’t sophisticated enough at 11 to understand how, in some ways, it was aimed through the black community (for) urban renewal or slum removal. ... In a sense, the big highway coming through was kind of an adventure, in the way that bombed-out London was a playground for kids unable to fully appreciate what the devastation meant.”

Hazel said the DOT photographs “speak to me.” She knew instantly she needed to paint some of them.

“I like the questions that (the collection) puts up: Why is there a brick on that garbage can?” Why is that house overgrown? Who lived there? What were these residents thinking when they saw the surveyors in their yards, arms spread wide? “It creates a dialogue for me, and I hope other people see it too.”

Hazel, the oldest of six children, attended college in New York, majored in math and became a school teacher. Along the way, she took an art appreciation class and visited her first museum, the Metropolitan Museum of Art. “I was just blown away,” she recalled of the experience.

She graduated in 1970. Seven years later, she picked up a camera for the first time. She became a volunteer photographer for the nascent Piccolo Spoleto Festival. Eventually, people asked her to document private events, so she started a small photography business.

Hazel was busy, teaching at Trident Technical College and shooting weddings on the weekends, when, in 2001, a friend at church gave her a gift for her 53rd birthday: watercolor paint and brushes. The man, Frank Hamilton, was worried that Hazel was overtaxing herself, and that watercolor painting would relax her.

A few years later, they were married, and Hazel was a dedicated painter. She took classes at the College of Charleston to hone her technique. In 2005, she retired from teaching after 30 years. In 2008, she shut down her photo business.

She is fascinated by the intersection of art and community and determined to capture in watercolor the character and the history of the place she calls home.

“I want to remind people who we are,” she said. “This Charleston is a very special place. I don’t want to throw out everything we had.”

A local organization supporting a 15th century art form was established in 2015 to bring more awareness to an old and often overlooked medium.