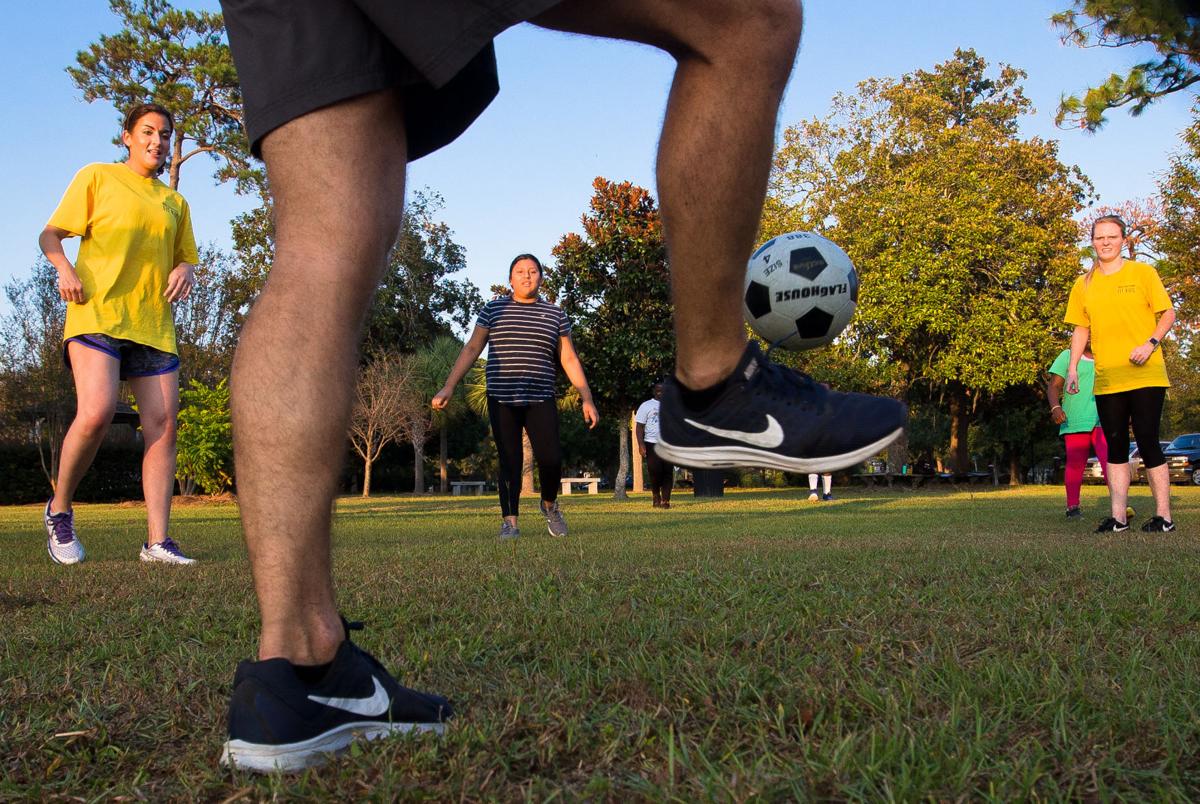 Abril Lopez (center) watches the ball with volunteers Caroline Hubbard and Mary Kate Sullivan as they play soccer during an hour session of the MUSC Heart Health Program on Thursday, Oct. 3, 2019 at Park Circle in North Charleston. The group meets starting at 5:30 p.m. Monday through Saturday. Andrew J. Whitaker/Staff 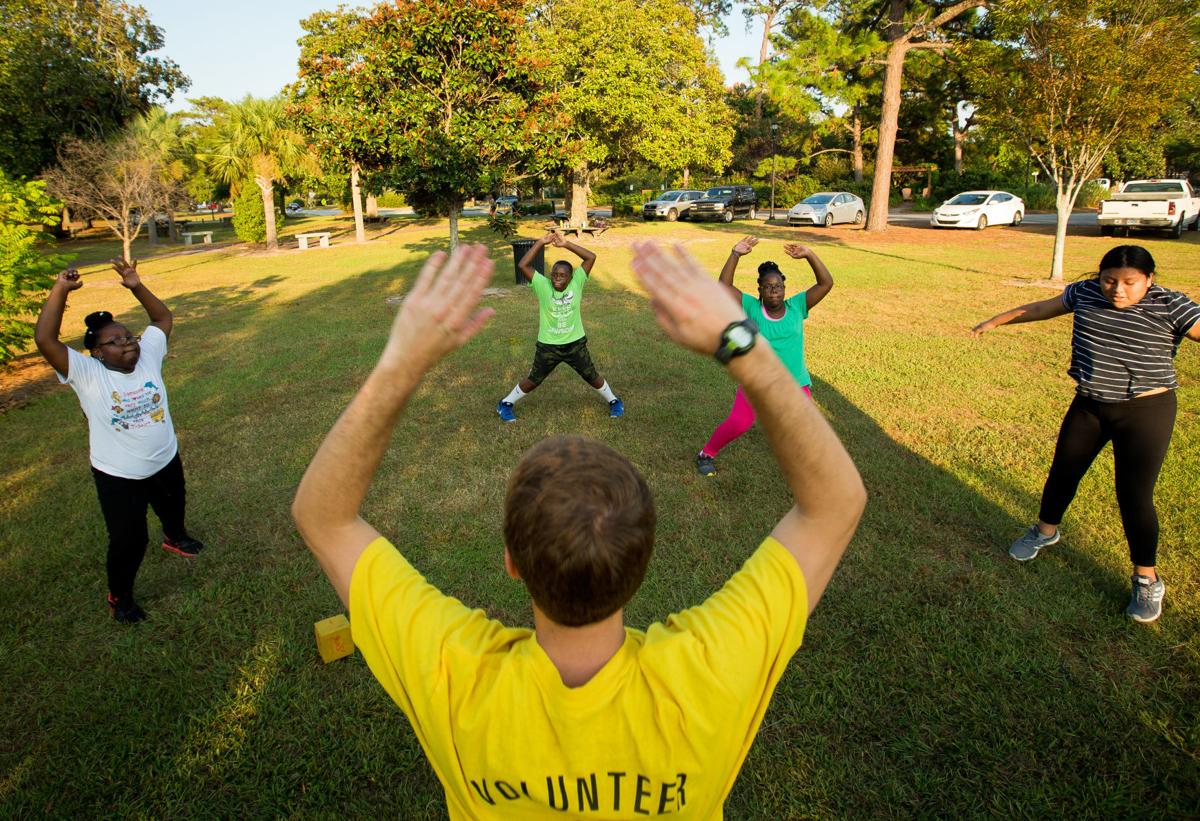 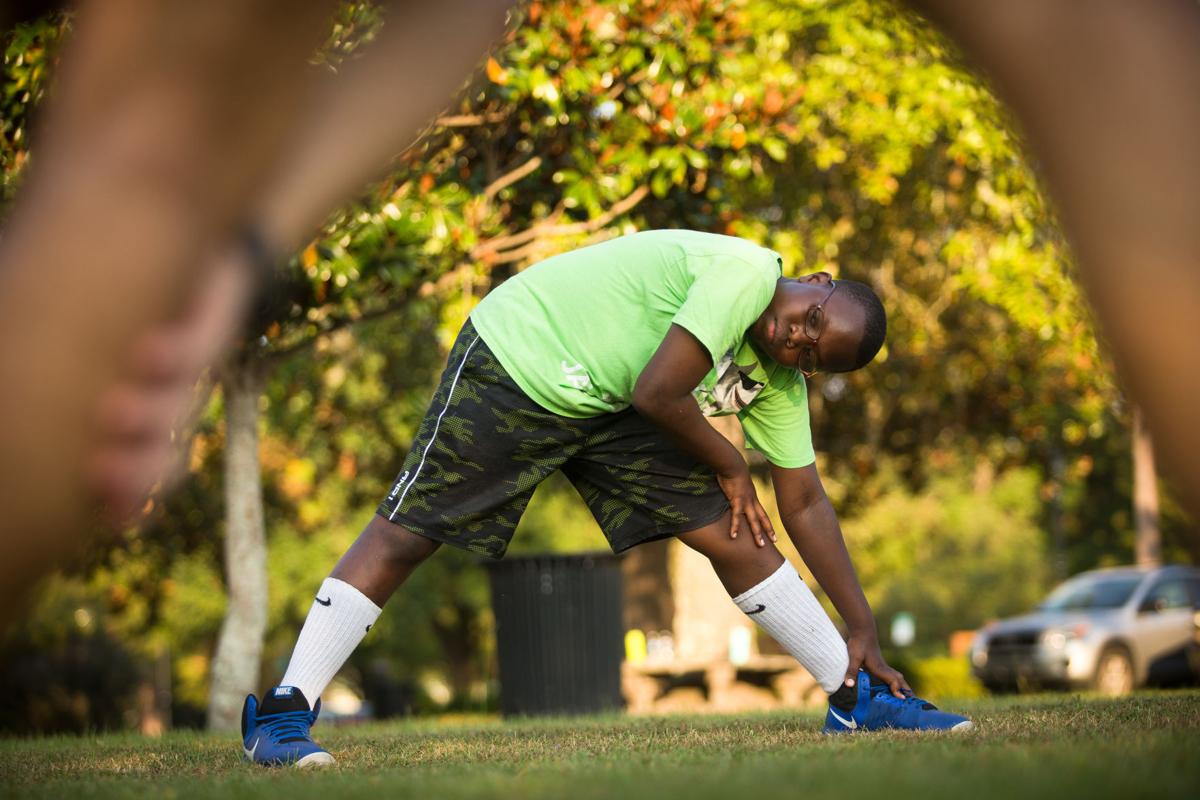 Words like "obese" and "diet" are considered a no-go with most health professionals who work with children. And it's not because they don't see childhood obesity as a problem or think that monitoring what a child eats isn't important.

"Obesity is a disease," said Janet Carter, program manager for the Medical University of South Carolina's Heart Health Program. “So we have to look at it more like a disease than a label or a personality flaw.”

That's why a new WW (formerly Weight Watchers) app for children called "Kurbo by WW" recently launched with mixed reviews. Many people thought the company's track record helping adults lose weight could offer children tools for making healthy eating decisions. After all, U.S. News & World Report ranks WW as the No. 1 diet for weight loss. But others saw the lack of medical support available to children through the app and the tracking of food consumption as a potential gateway for harmful habits around eating.

It also sparked a lot a fear and conversation around whether a diet culture should be or potentially was being pushed on children grappling with obesity.

In 2017, the State of Obesity report ranked South Carolina 24th in obesity rates for children between the ages of 10 and 17. For high school students, the state ranks sixth.

While Carter, who also manages a pediatric weight management program at MUSC, said she needs to learn more about Kurbo, but said an app like it would be great for children — if done correctly.

It would be especially helpful to teenagers who live in a form of limbo, she explained.

"The obesity epidemic has hit teenagers really hard," she said. “I think it would be short-sighted not to include teenagers in this conversation.”

Carter also can see how the app may not be able to live up to its full potential with the lack of heavy clinical support. And her colleagues at MUSC agree. Dr. Christine SanGiovanni is a pediatrician and medical director for the Heart Health Program.

She said anything that could cause weight loss should have medical supervision, especially since children are obviously still growing. Part of the Kurbo application does require that children input their weight.

"The goal is to encourage kids to eat more green light foods, which are fruits and vegetables, and be mindful of yellow lights, which include pasta, rice, bread, lean protein and dairy," company officials explained in a statement provided to the press. "And gradually reduce — but still include — red light foods that are high sugar, high calorie, with little nutritional value. No food is off limits."

Kurbo's website explains that scientific studies published in top academic journals have shown the program is safe and effective. The app, with online coaching, costs $17.25 per week for a 1-month plan. Weekly fees are lower if users sign up for a 3-month or 6-month plan.

When SanGiovanni and her colleagues collect a child's health information in their clinic, they usually just show kids where they align on a spectrum instead of focusing on a number on the scale.

When speaking to them, they explain that their weight range may make them more susceptible to health concerns such as hypertension and diabetes. They typically avoid framing as an issue being overweight or focusing on a number.

SanGiovanni said the academy also recommends that they take a universal approach with weight management and be careful with the language they use around obese children. This means giving all patients and families the same information on healthy living, regardless of weight.

It's not about outward appearance, she said.

“We talk more about why we want the inside of our body to be healthy," SanGiovanni said.

That's why she and others shy away from using words like "obesity," "diet" or "overweight."

“We just like to talk about lifestyle," said Louis Yuhasz, the creator of Louie's Kids, a family health program in Charleston that is fighting childhood obesity.

He and his team also are careful about the language they use. The more beneficial method he and others have seen involves working with families as a whole.

They especially want to work with parents who, he explained, often are the gatekeepers for unhealthy food choices for their children. When a child gets an unhealthy item from a grocery store, a parent typically has to buy it.

Oftentimes, parents themselves could benefit from additional education on how to live a healthy lifestyle.

At the age of 13, children who use the  Kurbo app no longer need parental supervision. But experts note that parents play a crucial role in this journey and should be involved.

In its stigma study, the American Academy of Pediatrics highlighted that nearly 40 percent of adolescents who attended a weight-loss camp reported being teased or bullied about their weight by their parents.

"No one is ever going to be receptive to that," Carter said.

Additional studies have shown that increased stigmatization around weight leads to increased depression and anxiety. So when parents isolate a child for being obese, solely restrict them from eating certain foods or emphasize a weight number to them, experts have found that it may not have positive effects.

“If you set a weight goal, there are a lot of ways to get there, including some unhealthy ways," said Dr. Jeffrey Cluver, director of Trident Medical Center's Behavioral Health Program.

The Post and Courier reached out to WW for a comment, but the company did not respond. While a smartphone app for children may potentially be helpful, a relationship with a pediatrician is even more important. Instead of looking to restrict certain foods, experts advise encouraging families to frame it more around how to live a healthy lifestyle.

There should be a consistent physical activity for children and not necessarily a heavy calorie-counting process, SanGiovanni said. Fats are good for kids. The only things that should be restricted is sugary beverages, she said.

Weight management should be a family process. And for children with obesity, they should be approached with care and supervision.