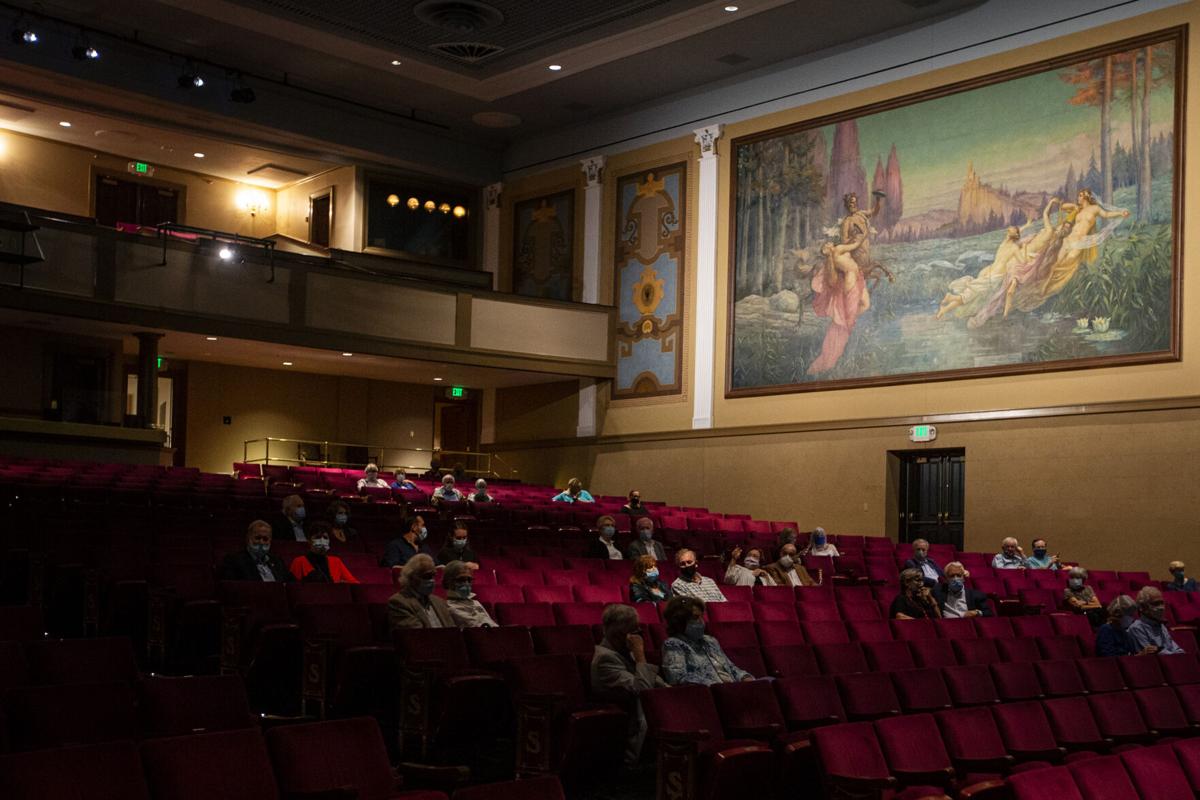 Concertgoers practice social distancing while waiting for a performance at the Sottile Theatre on Friday Sept. 25, 2020, in Charleston. Gavin McIntyre/Staff 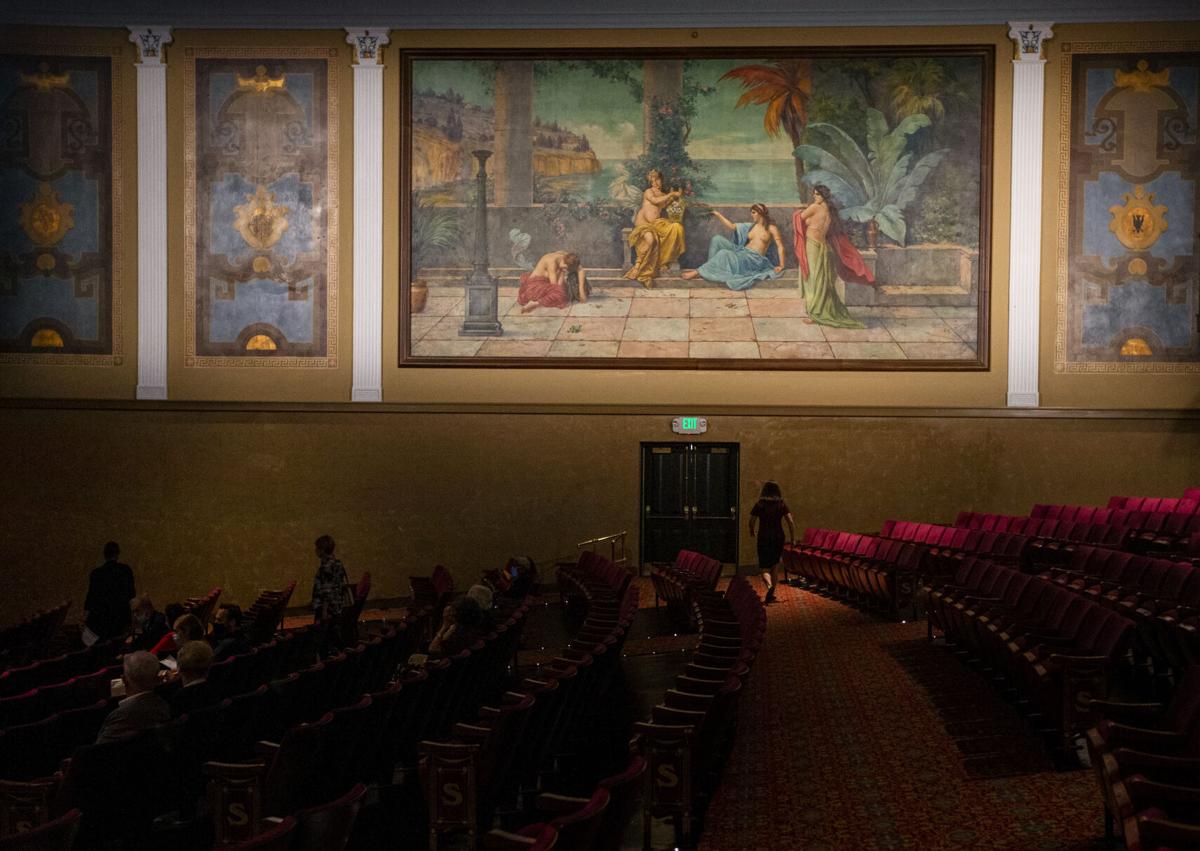 Light illuminates a mural along the walls of the Sottile Theatre on Friday Sept. 25, 2020, in Charleston. Gavin McIntyre/Staff 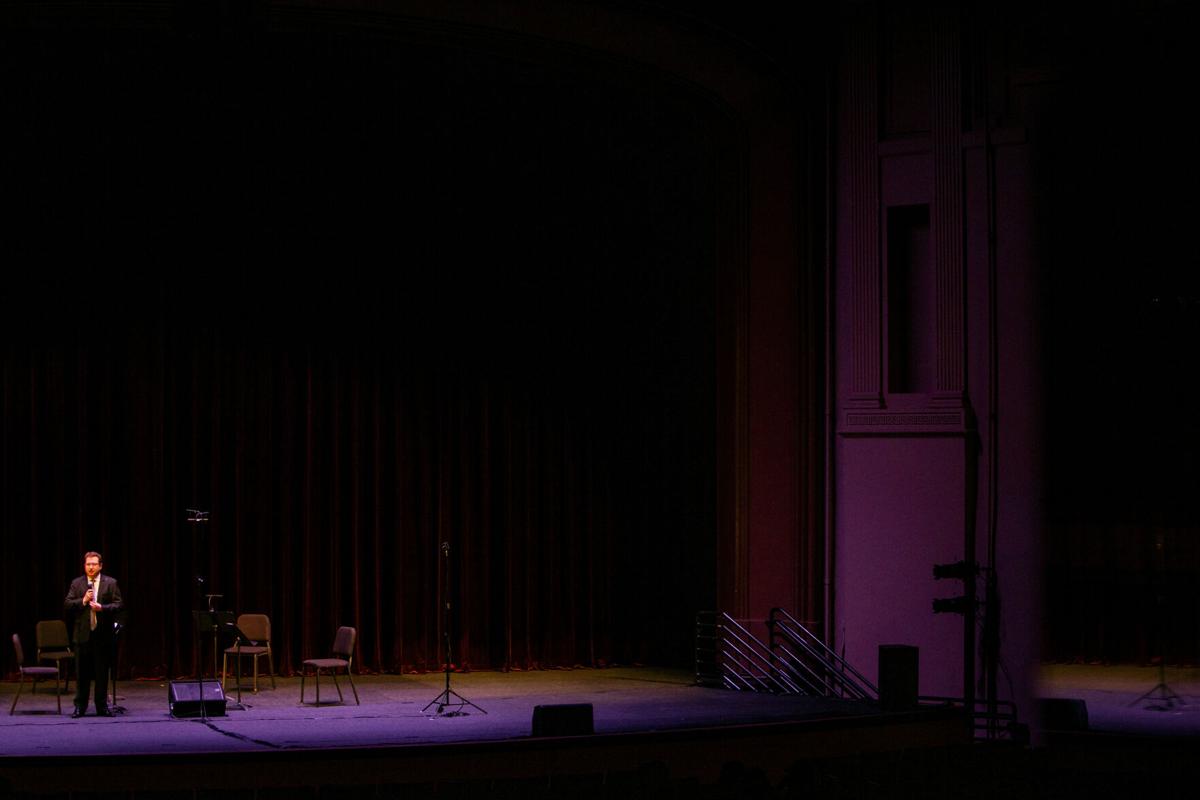 Yuriy Bekker addresses the audience before the performance at the Sottile Theatre on Friday Sept. 25, 2020, in Charleston. Gavin McIntyre/Staff 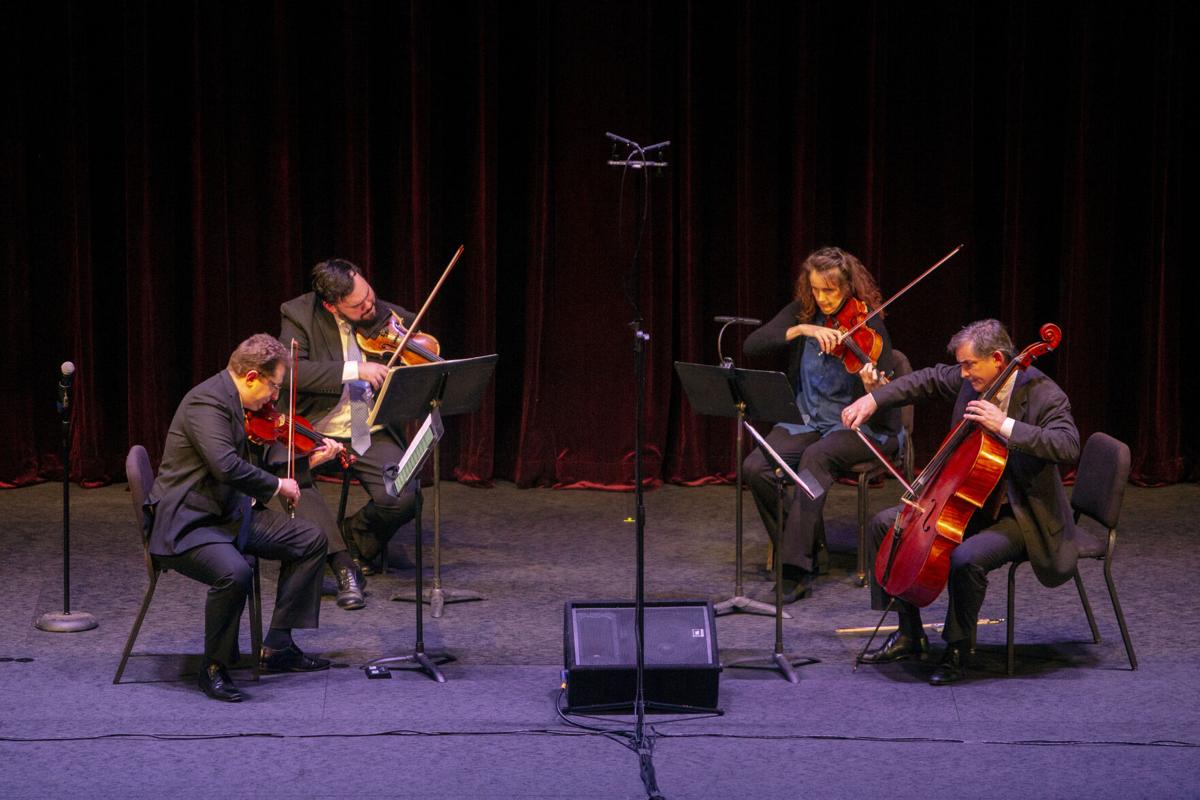 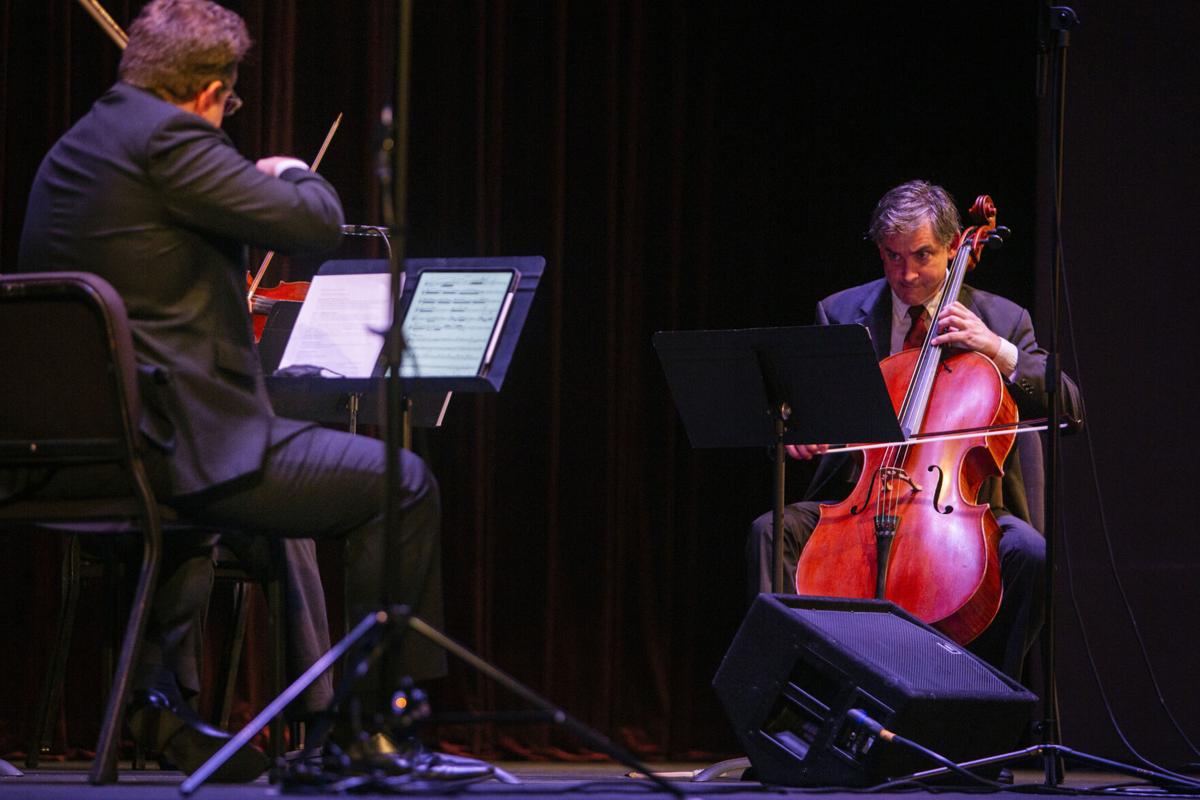 Norbert Lewandowski plays the cello during a performance at the Sottile Theatre on Friday Sept. 25, 2020, in Charleston. Gavin McIntyre/Staff 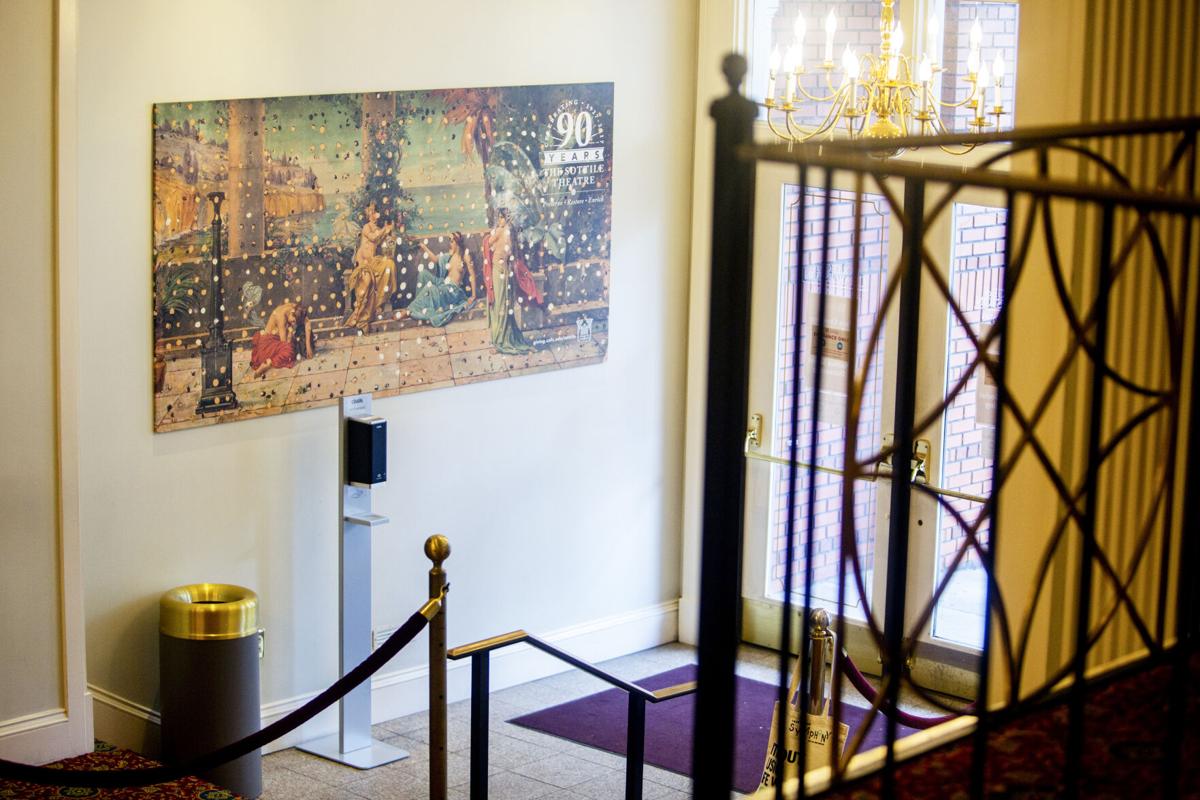 Hand sanitizer is set up at the entrance to the Sottile Theatre on Friday Sept. 25, 2020, in Charleston. Gavin McIntyre/Staff 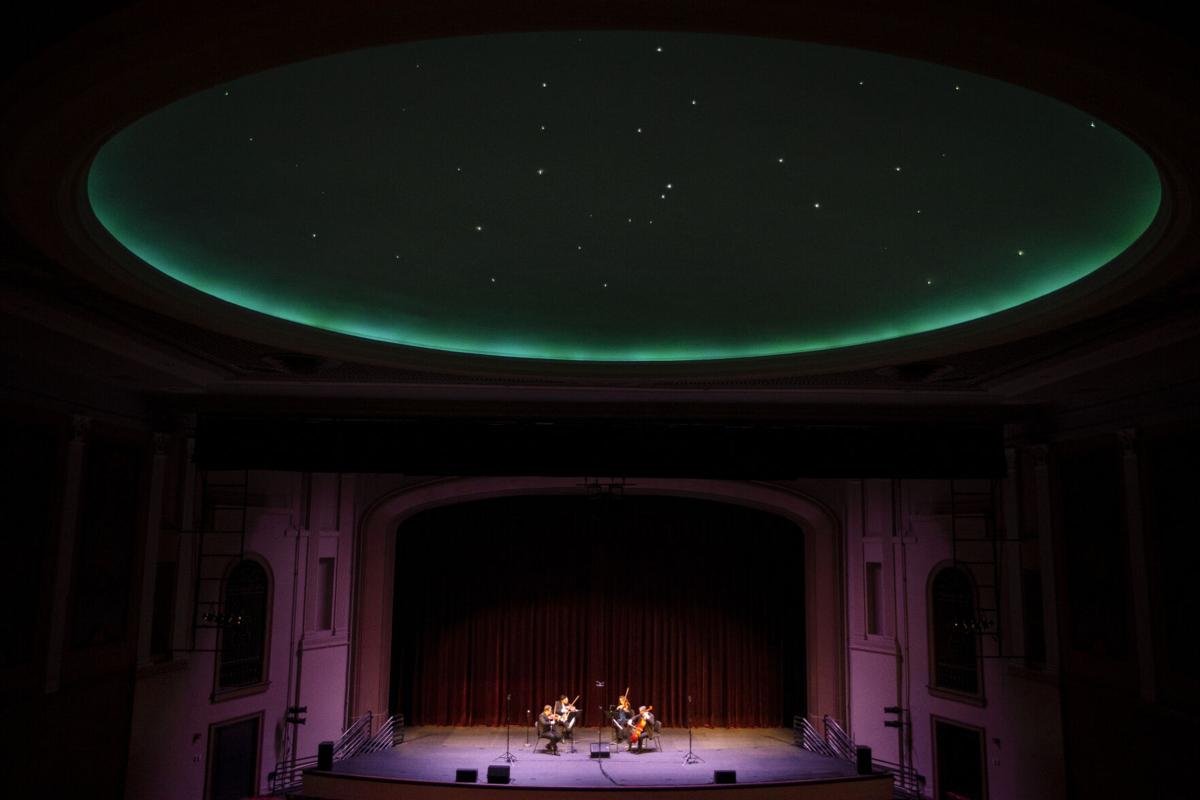 Concertgoers practice social distancing while waiting for a performance at the Sottile Theatre on Friday Sept. 25, 2020, in Charleston. Gavin McIntyre/Staff

Yuriy Bekker addresses the audience before the performance at the Sottile Theatre on Friday Sept. 25, 2020, in Charleston. Gavin McIntyre/Staff

Hand sanitizer is set up at the entrance to the Sottile Theatre on Friday Sept. 25, 2020, in Charleston. Gavin McIntyre/Staff

Before the pandemic, Anja Kelley was amping up for an altogether splashy reveal.

As director of operations of the Sottile Theatre, which is owned by the College of Charleston, Kelley had spent a good part of the past few years navel-gazing over carpet samples, herding campus constituents, facilitating fundraising and attending to the countless other details of a $4.7 million renovation.

The one thing mercifully off her plate was the hanging of the new lights. They were to be loaded in by Spoleto Festival USA, which was reopening the theater for “Omar,” its highly anticipated new opera boasting a music and libretto by artist Rhiannon Giddens. But when the pandemic kiboshed the festival, the lights landed back with the Sottile team, too, a weeks-long, labor-intensive proposition for them.

That, and much of what was renovated in the 785-person theater, is undetectable to a patron’s eye, including upgrades to the stage, backstage and basement. These included a crucial replacement of an obsolete hemp rigging system with a modern counterweight model and the installation of an automated orchestra pit lift.

There is some eye candy, too.

An ornate, jewel-toned garnet carpet now travels the lobby, rolling down the theater aisles, a marked improvement from the tired maroon rug of yesteryear. The decorative architectural details that frame the theater’s iconic twinkle-lit ceiling dome have been accentuated with a new color palette.

And, in the renovation's visual show-stealer, an original pair of canvas wall murals that were restored to their former vibrancy now gloriously face off from opposite walls to command the hall.

“Simply put, form and function came together beautifully to make this an even better performance space,” said College of Charleston President Andrew Hsu, who credits former president Glenn McConnell and interim president Stephen Osborne with the heavy lifting for what was their passion project.

It made possible by both institutional capital project funds and a private grant from the Spaulding-Paolozzi Foundation, as well as additional support from the Albert Sottile Foundation.

In short, Charleston is now primed to tout another spit-and-polished venue in a constellation that in the past decade has added much cultural sheen to the city.

There is the $19 million renovation of the Dock Street Theatre, which reopened in 2010; the $142 million overhaul of Charleston Gaillard Center, reopening in 2015; the $13.5 million makeover of Gibbes Museum of Art, opening in 2016. Other smaller venues demonstrate the impact of enlightened development, among them the Cannon Street Arts Center, The Schoolhouse, the West Ashley Theatre Center and Redux Contemporary Art Center. Next up is the International African American Museum, which is well underway.

“A cultural capital such as Charleston needs a wide variety of venues, both in size and setup,” said Hsu via email. “The College is proud to have a grand performance space like the Sottile — its grandeur only matched by the many great artists, performers and speakers it hosts.”

Such venues also help keep Charleston in good stead on national rankings, a significant component for raising awareness, not to mention funds. In the 2020 Arts Vibrancy Index by SMU Data Arts released this week, Charleston earned notably high scores (though neglected to make the list's Top 40). One was a 97 in arts providers, which include independent artists, arts and culture employees, nonprofit cultural organizations as well as arts, culture and entertainment firms.

The pandemic, of course, was far from the only setback the theater has seen since Albert Sottile, Charleston’s legendary owner of Pastime Amusement Co., opened it in 1927, a couple of years before the Wall Street crash.

Crowned the Gloria Theatre, it was Sottile's decked-out darling, designed by famed architect C.K. Howell. It dazzled beyond the many entertainment venues then owned and operated by the Sicilian emigrant, courting Charleston audiences with star-studded film releases and traveling vaudeville acts.

For decades in downtown Charleston, the marquees of the Gloria, the American, the Garden Theatre and the Riviera glistened along King Street and surrounding streets like Liberty, home to the Arcade, and Society, with The Victory.

For the Gloria, Sottile spared no detail. Its opening was glowingly described on the front page of The Charleston Evening Post on Aug. 20, 1927. “The touch of genius seems to have prompted those who designed and supervised the decorations ... There are rich color effects without gaudiness, deft artistic touches without ostentation, a wealth of painting and statuary without extravagance. Good taste is evident throughout.”

Among the design elements lauded in the article were the two canvas murals, a commission of a New York City artist and created in a classical vein. One featured mythological creatures and the other celebrated music and drama. Flanking the theater seats, they gloriously brandished opposite walls that were offset by additional blue and gilt decorative murals between column-shaped friezes.

When in the 1960s the movie houses starting losing audiences due to suburban flight from downtown Charleston, Sottile’s pleasure palaces began to dim. The Gloria closed in 1975, and was acquired by the College of Charleston in 1976. The College now uses it for as a learning lab for students and locale for campus events as well as a premier rental venue.

By then, its magnificent ceiling dome had all but lost its twinkle. Acoustic panels had pushed aside the murals. The one on the southern wall was rolled up and stashed in an office; the northern one remained in place, concealed by the panels that were unceremoniously affixed to it.

For the renovation, the murals were restored by a painstaking process by art conservator Catherine Rogers. The south mural was done in Rogers' workshop, but the northern one was a beast involving scaffolding. Its comely tableau in tribute to music and drama was mottled by adhesive residue, its celebration of the arts thus utterly compromised.

On a rain-slick Friday night in September, Charleston Symphony subscribers quietly padded into the theater. There, they were greeted by smiling-eyed, masked CSO and Sottile staffers, who escorted them in fittingly distanced pairs to assigned seats staggered 6 feet apart, sprinkling them through the rows. (The Sottile currently has a maximum capacity of 200.)

At long last, the Sottile was hosting a live cultural performance, the CSO's rescheduled program for the "All Roads Lead to Vienna" performances of last April.

Gone was a teeming, swanky sea of Spoletians abuzz at a world premiere. Gone, too, was much of the fervor of the onset of the fall cultural season, the animated hum of music lovers swapping observations w ith those sitting next to them or the anticipatory sounds of a orchestra tooting and bleating and creaking in tune-up.

Six months ago, a subdued crowd of this size and spacing may have prompted arts advocates to wince. Now, it likely elicits relief, and perhaps due respect for an arts organization making its tentative way forward. Kelley also noted that the chamber music concert also offers a chance to show off how well the Sottile suits acoustic performances.

The concert gathered four CSO musicians, Yuriy Bekker and Micah Gangwer on violin, Jan-Marie Joyce on viola, and Norbert Lewandowski on cello. Together, the string quartet masterfully, meaningfully explored the early days of Beethoven through his own works as well those by Bach, Mozart and Haydn. A fitting lineup for a first foray, it was at once bright and crisp with possibility, thanks to Haydn, and as technically challenging as a nascent Beethoven on the rise.

For the CSO, it afforded a long-awaited connection with its devoted subscribers.

“We decided more engagement, not less, was going to be key. And we've done that,” said Charleston Symphony Executive Director Michael Smith.

According to Smith, this season, which opens with a Masterwork on Oct. 23 and 24 at the Gaillard, has managed to retain most of its original thinking. It is as close as possible to the plan the CSO launched in February, with eight Masterworks and four pops concerts. Honoring a yearlong celebration of Beethoven's 250th birthday, the CSO is tackling seven of his nine symphonies.

In this bold new world of taking temperatures, metaphorically and otherwise, Smith has stayed closely in touch with the CSO community, who have shared through surveys their desire for live music.

“It’s been really helpful to stay connected," he said.

Gaillard president and CEO Stephen Bedard to retire in 2021

While the Sottile didn’t get a world premiere in a packed house to show off its new finery, the opening helped to create something arguably far more sparkly: a path to a new way of experiencing staged productions in Charleston.

“For me, the Sottile Theatre is a true opportunity space — a space that gives our students and the people of the Lowcountry the opportunity to come together and explore the life of the mind — making our entire community, I believe, even better,” said Hsu.

Restoring our arts community won’t be easy. However, those pre-pandemic indicators of arts vibrancy, like multiple, modernized venues, prime us in some ways. It is the brand of vibrancy that can attract support, cultivating audiences and donors alike.

My mind’s eye leaps to those murals, which languished for decades until an artist tentatively, tirelessly set about to restore them, cleaning grime, stripping off splotches, coaxing colors.

Here's hoping that with continued efforts, the arts will as quickly as possible regain their vibrancy, too.