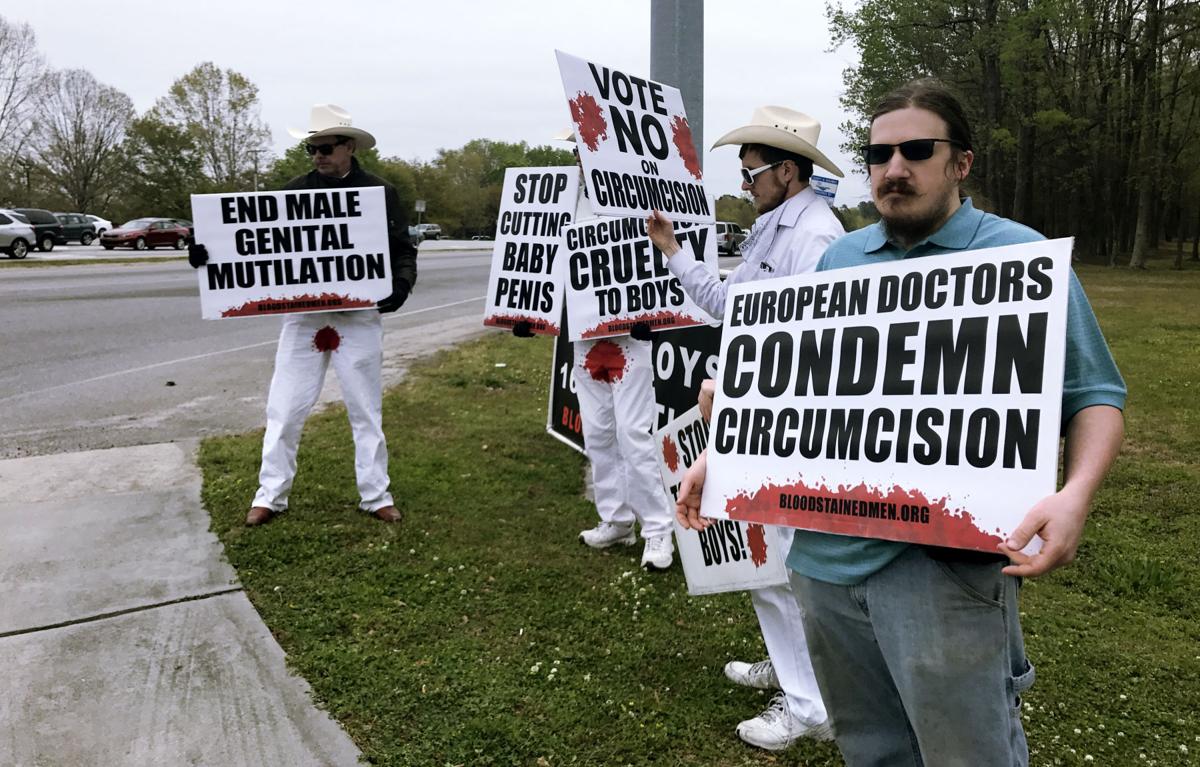 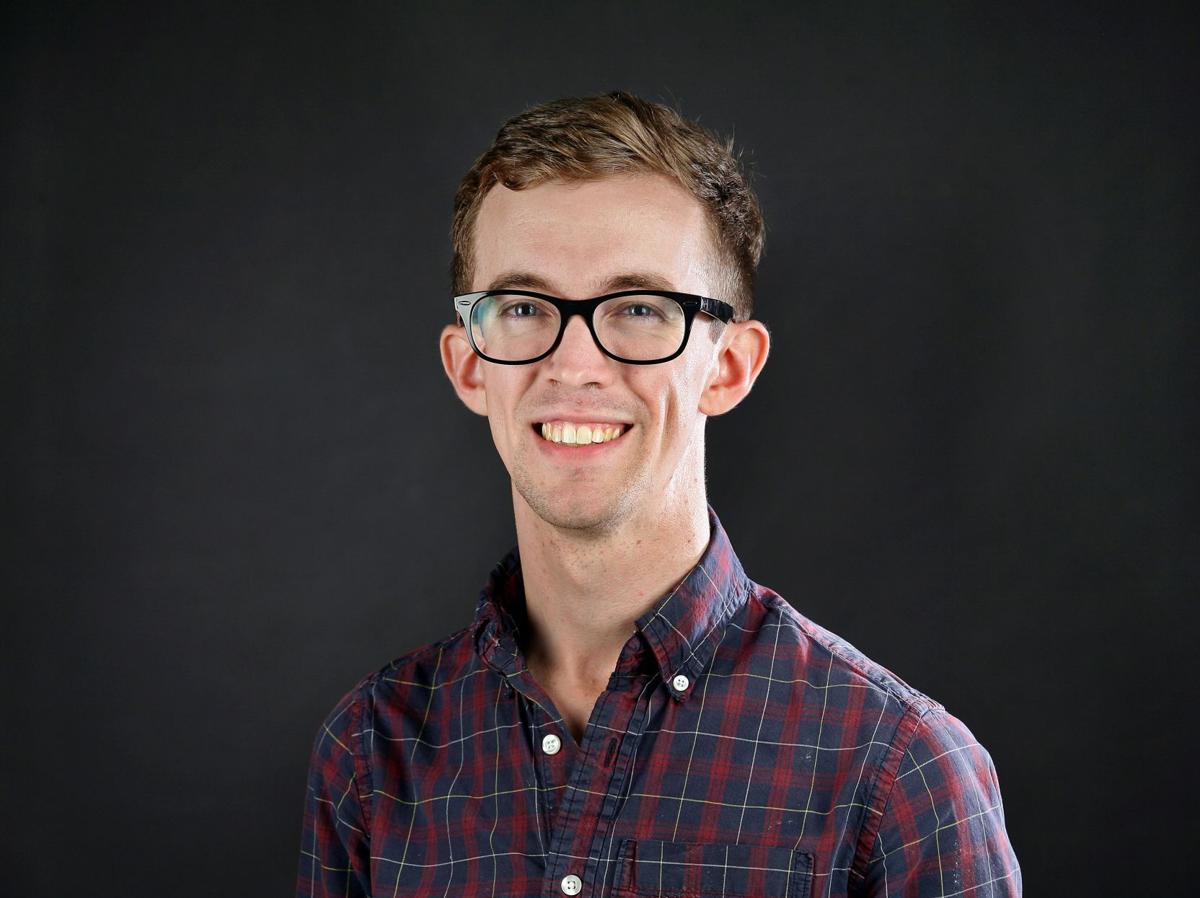 Paul Bowers is a father of three living in North Charleston.

It was impossible to ignore the men in white pants with red stains on their groins. They picketed in front of hospitals across South Carolina bearing signs of protest against the practice of infant circumcision:

"My Body Belongs to Me."

The national activist group known as the Bloodstained Men cut a path across the Palmetto State in late March, making appearances in Rock Hill, Columbia, Charleston, Myrtle Beach and Florence. On the roadsides where they hoisted their signs, they elicited honks of support, honks of derision and more than a little curiosity.

Circumcision is the surgical removal of skin covering the tip of the penis. For many parents in the United States, infant circumcision used to be a foregone conclusion, but the rate of male circumcision has been dropping off as parents second-guess conventional wisdom and religious teachings. Even some practicing Jews have begun to question the practice in recent years, joining a movement of "intactivists" promoting non-surgical alternatives to the traditional bris.

Circumcision has ancient roots in multiple cultures, in some cases signifying a rite of passage or a covenant with God. If you grew up reading the Bible, one story your Sunday School teacher probably skipped over was that time when the warrior David brought the foreskins of 200 dead Philistines to King Saul as a dowry for his daughter.

Today it's a tricky topic with a range of divergent opinions and cultural forces at play. One study published in Population Health Metrics in 2016 estimated that the global rate of male circumcision was about 39 percent.

The United States had an above-average circumcision rate of 71 percent, while rates varied widely across the globe: Nearly 100 percent in Afghanistan, Yemen and Morocco; 92 percent in Israel; 45 percent in South Africa; 21 percent in the United Kingdom; 14 percent in China; and nearly 0 percent in Finland, The Bahamas, Armenia, Greenland and Vietnam.

For expectant couples with a boy on the way, the circumcision decision has become more fraught than it was a generation ago. Activists like the Bloodstained Men say circumcision is an unnecessary and harmful violation. Proponents, including many medical professionals, say the health benefits outweigh the risks.

If you're looking for a simple "yes" or "no" answer from a pediatrician, you're probably out of luck. I know; I called one.

"I think it's really a personal choice for a family," said Dr. Heather Will, a neonatologist at Roper St. Francis. (She saw the protesters too; friends were texting pictures to her when it happened.)

Let's start with the cons: Circumcision does hurt the baby. But doctors are able to mitigate the pain with injectable lidocaine and sugar-water on a pacifier. For what it's worth, Will said most babies don't even cry during the procedure.

There is also a risk of bleeding, and Will said doctors sometimes discover children have a bleeding disorder during circumcision.

As with any surgical procedure, there is a chance of an accident. Some patients have to return later for a "revision" if the doctor cuts the skin too close or not close enough. A 2010 review by the World Health Organization found that complications are "rare" when the circumcision is performed by trained providers with hygienic conditions and adequate supplies.

"The circumcision procedure is an art, not a science," Will said.

As for the "16+ functions" that circumcision is supposed to destroy, 13 of the 16 foreskin functions listed on the Bloodstained Men website could be broadly categorized as "makes sex better."

Needless to say, there's room for debate on that.

In a 2012 policy statement on circumcision, the American Academy of Pediatrics stopped short of a blanket recommendation, but wrote that "preventive health benefits of elective circumcision of male newborns outweigh the risks of the procedure."

The Mayo Clinic also points out that circumcision allows for easier hygiene, although uncircumcised boys can be taught to wash regularly beneath the foreskin.

But according to department spokeswoman Colleen Mullis, the majority of South Carolina Medicaid recipients get their coverage via managed care organizations, which still cover routine circumcision. And the state will still pay for the procedure on a fee-for-service basis if a doctor determines that the circumcision is medically necessary.

While some families are opting out, Will said circumcision is still the norm among the patients she sees in South Carolina. She estimates that about 25 to 30 percent of families decide not to circumcise. Leave the state or country, and it's another story.

It's hardly a medical concern, but Will said families are also considering aesthetics.

"If you're a teenager and you're going to the gym, everybody’s getting dressed, there's a little bit of matching, and that’s important for the teenage ego," she said.

So there you have it: An open question with no definitive answer, fierce opinions on both sides, and a possible lifetime of repercussions. Welcome to parenting.