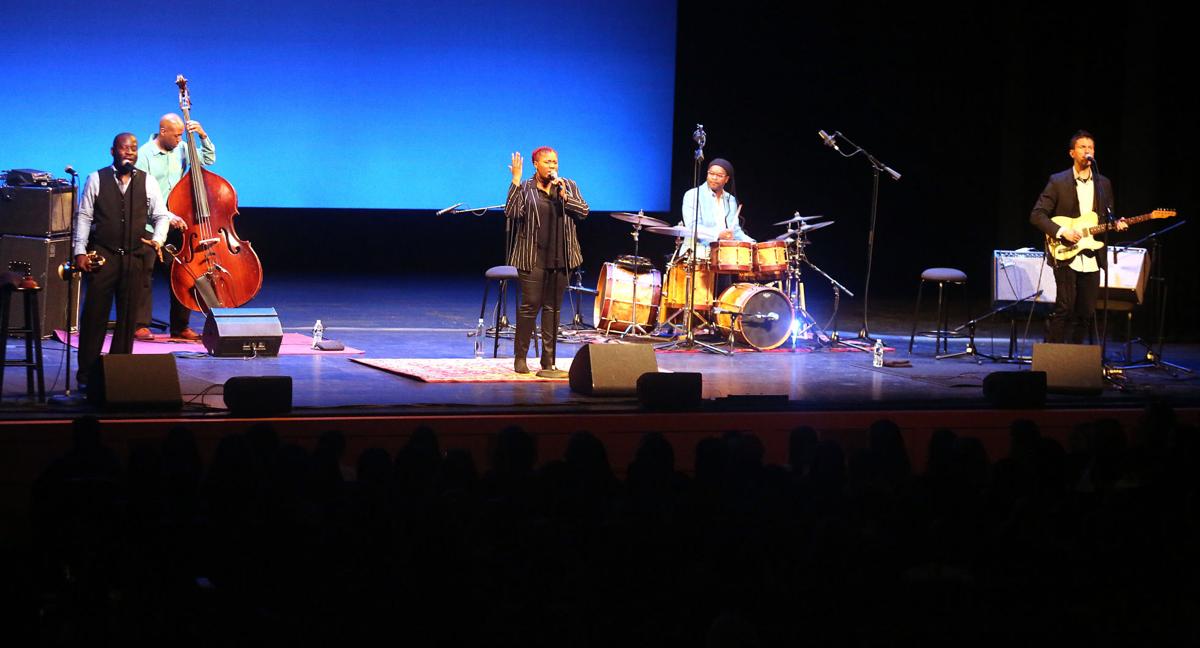 Ranky Tanky performed at the Gaillard Center as part of the Gaillard Center's Arts in Education program on March 9, 2020. Quentin Baxter, producer of the band Ranky Tanky and its drummer, said all tour dates in March and April were quickly canceled a couple of weeks ago. Brad Nettles/Staff 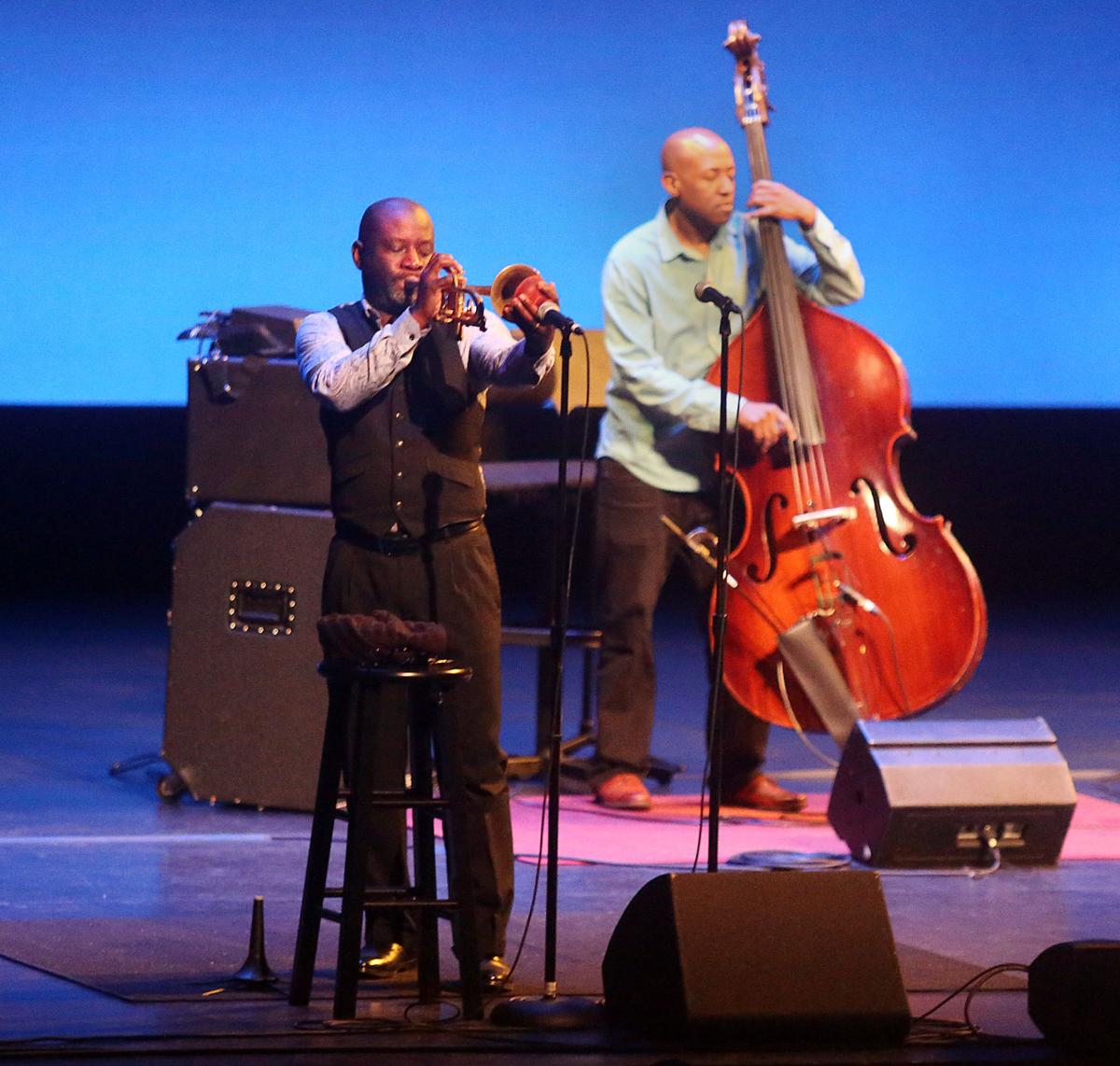 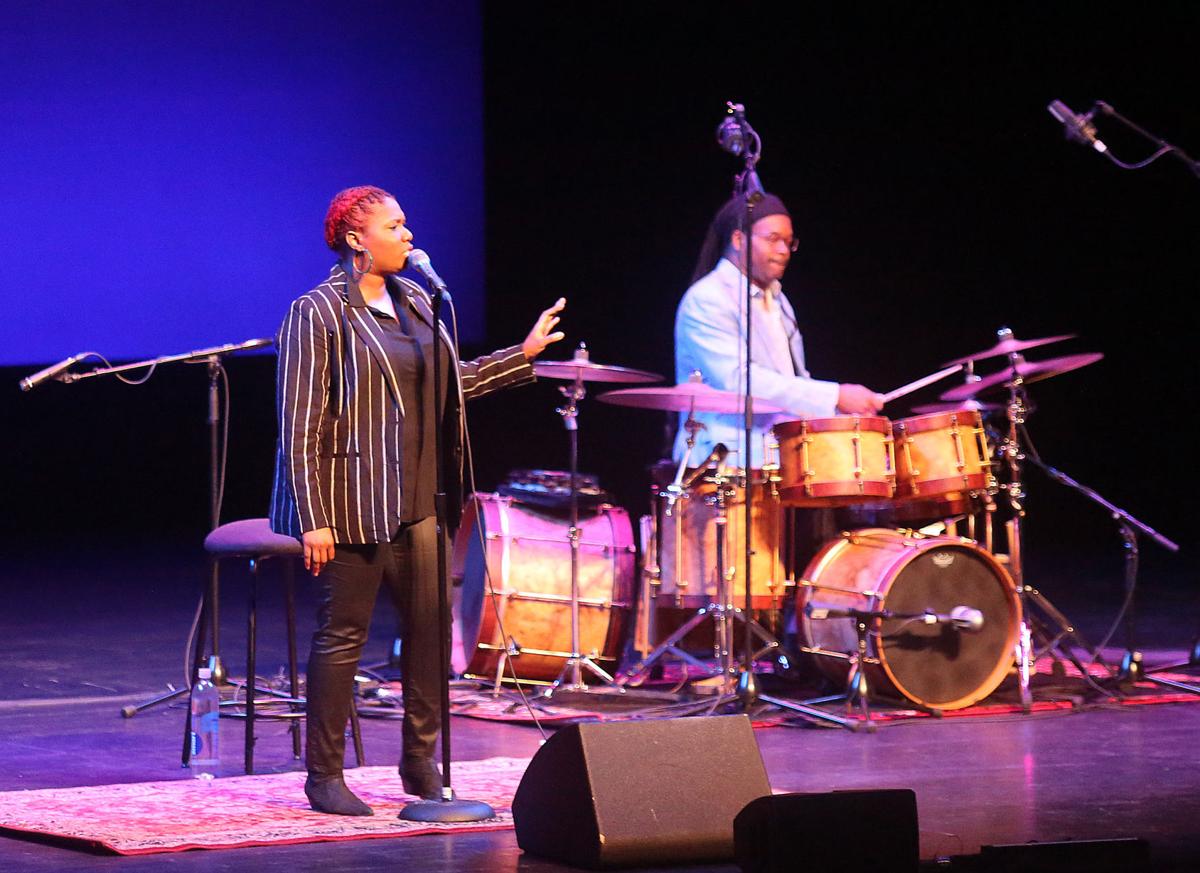 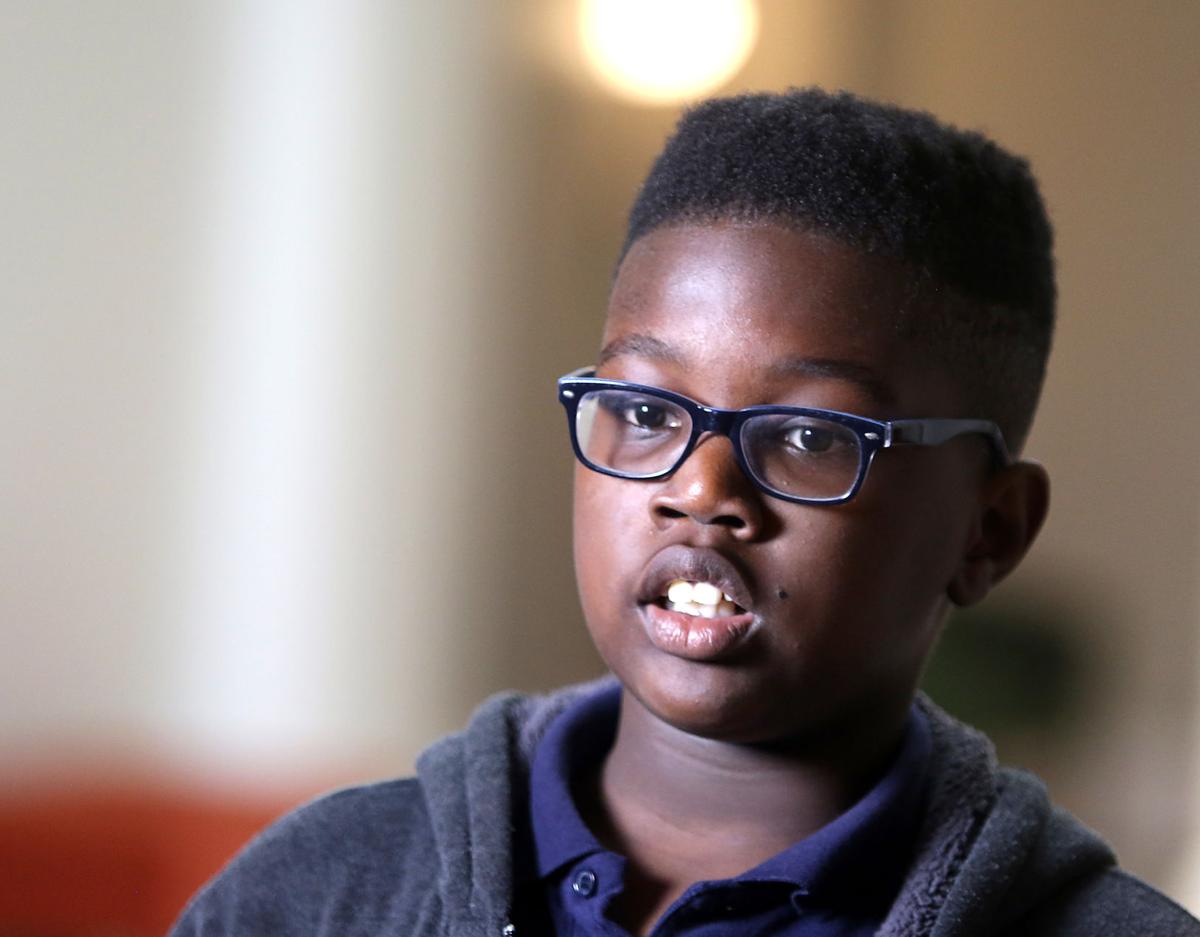 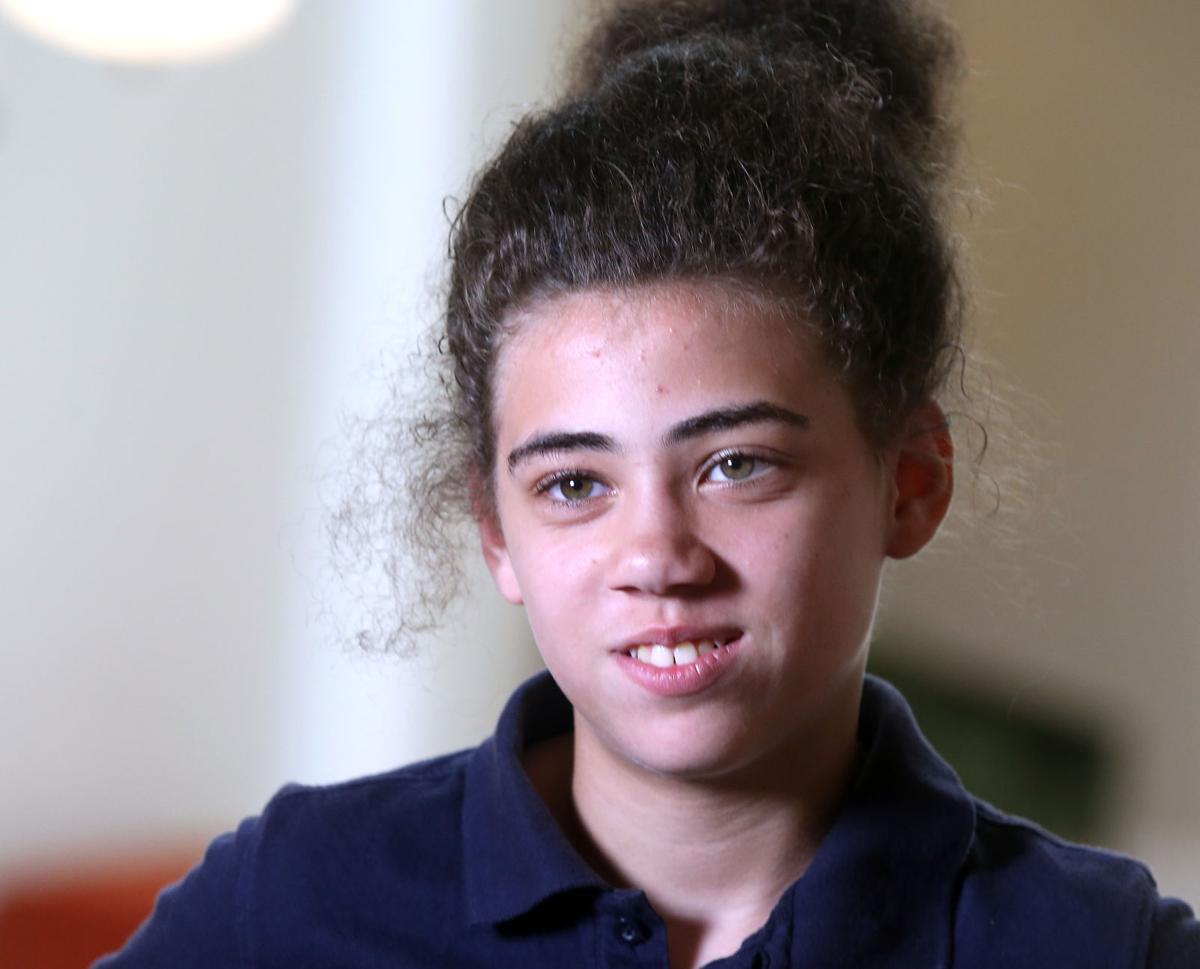 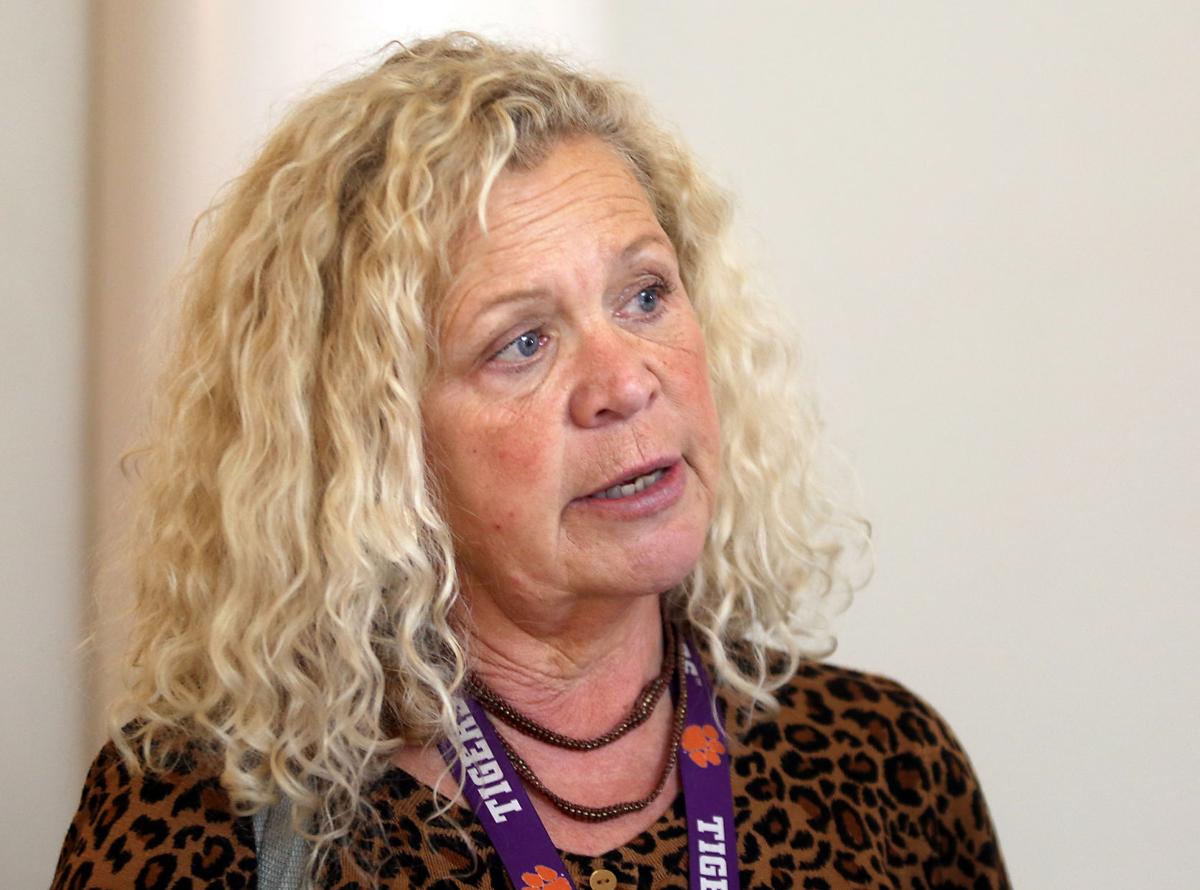 The lines filing into the Charleston Gaillard Center were markedly a-jitter. That’s not altogether surprising, considering that the crowd was among those lucky enough to have landed a seat to hear Ranky Tanky, the Gullah-powered Charleston band fresh off a Grammy win that regularly packs venues the world over.

And, while many in Charleston had struck out on seeing the group perform at the sold-out Charleston Symphony show, these whispering, giggling children had fared better, and free of charge.

This was thanks to the Charleston Gaillard Center Education and Community Program. On Monday morning at 11 a.m., 1,560 students spanning first through eighth grades enjoyed an hour-long concert, which was the culminating production of the program's 2019-20 season.

For the event, a merry band of bright yellow school buses wrapped around the Gaillard's stately neoclassical building, spilling its energized passengers into the sumptuous hall.

On Johns Island, the roots are tangled. And so are the stories.

If you think the show was a grand gesture to cultivate the arts among Charleston youth, perhaps you can benefit from some schooling on the subject, as I have.

Yes, there is plenty to gain from fostering a lifelong love of the arts among a new generation. And while that is a welcome side effect, the Gaillard’s program aims instead to leverage the arts to elevate learning in South Carolina.

Last month, my own arts-slanting Twitter feed was abuzz with news of “To Kill a Mockingbird.” The Broadway production had shifted its location to Madison Square Garden for a single free performance for 18,000 middle and high school students.

That happens to be within striking distance of some of the Gaillard's annual numbers. Up and running since 2015, the program serves the tri-county area, presenting live performances and traveling to schools for lesson plans. In the past year, 12 productions in the Education Performance series have filled 20,000 seats.

The program also has conducted 274 workshops at schools and has toured shows to high schools that find it challenging to miss classes for field trips.

Operating on a first-come, first-served basis with teachers signing up for slots, the program also provides free tickets to schools from other South Carolina counties, including Beaufort, Colleton, Georgetown, Clarendon and Anderson.

The method to the merriment

While, yes, there is plenty of fun to be had at the productions, director of education Sterling deVries emphasizes that the Gaillard’s program is first and foremost purposeful. From its lesson plans to its production selection, its mission is to support education. A former Title 1 elementary school teacher, deVries knows from her 15 years in that field what the struggles are for both teachers and kids.

“We pick performances that are going to connect with the South Carolina state standards,” said deVries. “I know a teacher is not going to leave the classroom unless it is a meaningful and valuable event for his or her schoolchildren.”

That means they look for traveling tours that connect to standards that will be relevant to the classroom, such as elevated reading standards. When that became a statewide priority, the Gaillard began focusing on literature-based performances to help ensure that students are reading on grade level.

Through the program, students who don’t necessarily enjoy reading or have a difficult time doing so have the option of seeing a book live on stage.

”The content comes to life for them so they are able to grasp the story elements that way rather than just sitting down and reading a book," she said.

It was delightfully loud and clear during Monday’s concert that the kids were having quite a good time singing along with Ranky Tanky’s album, “Good Time."

Trumpeter and vocalist Charlton Singleton, artist-in-residence emeritus at the Gaillard, did not have to dig too deep into his own esteemed background teaching music at elementary, middle and high school levels to engage them.

The Awendaw native shared how, at their age, he was in that self-same hall as an audience member listening to music. Drummer Quentin Baxter, who is from downtown Charleston, was also in the audience at the Gaillard in his formative years. I suspect James Islander and bassist Kevin Hamilton was as well.

Lead vocalist Quiana Parler needed to merely clap her hands once to the music, and a willing, wee mass clapped along, too — no awkward adult reticence here. When she gave glorious voice to “All For You,” it was hard to imagine any child feeling left behind. That's ditto for lead guitarist Clay Ross’ launching of “Good Time,” harnessing the house into a collective, high-energy vibe.

Tackling a topic like pain took a turn for the joyful. Informed by its Gullah influences, Singleton dashed about the audience, disappearing from the orchestra and popping up in the mezzanine, as he cherry-picked kids claiming a pain in the head, leg and even soul, urging the audience to come together to heal them by shouting “Ranky Tanky!”

An arts in education primer

Amid such spirit and style, educational rigor rules. The program develops lesson plans to correlate with the production and the state standards. For instance, when it comes to reading and book-based productions, they support what the teacher is focusing on, such as an author’s purpose.

“We are trying to support what they are already doing and make their lives a little bit easier,” said deVries.

“They have really simple productions, but their content is really meaningful,” said deVries of the company, which helps kids understand challenging concepts like slavery. “It’s virtually impossible for a child to understand people being owned by other people."

Arts and teaching, deVries said, are actually are a perfect combination. “It’s so much easier to teach multiplication if you dance it.”

For the Ranky Tanky workshops, they began with its influences in African culture, sharing Johns Island Gullah chants and also connecting it with the slave trade. They then culminated with another tradition, sweetgrass baskets, and provided a STEAM challenge of creating a basket that will hold the most weight.

According to deVries, some impact of the program can be seen instantaneously, such as the making of broader cultural connections.

At Ranky Tanky, she sat next to the North Charleston-based Morningside Middle School. “I saw so many kids sit up in their seats and clap their hands when they heard a familiar song. They were making connections with hearing it at home or at church or in their community.”

After the concert, a few shared impressions.

"I'm thinking it's very important," said Cadoc, 10, a fifth-grader, due to the Gullah traditions in the songs. He particularly liked "Freedom" because it covered black history.

"Green Sally," with its accompanying movements, was also a hit. Fourth-grader Nicholas, 10, said "I could stand up and dance." His classmate Jordyn, 10, enjoyed how everyone was brought together when they were doing so.

Deborah Kinard, a fourth-grade teacher, has taken her students to three performances at the Gaillard this season. She is currently working with them on a Gullah art project, which she said ties in nicely with the Ranky Tanky performance.

"I think it's wonderful because the kids get to experience things that they normally would not get to ... if we could not bring them here for free," she said.

Through pre- and post-assessments, the program can gauge results from their efforts. One second grade class, for example, was assessed on growth in their reading skills.

“In that particular case the class grew by 100%,” said deVries. “The growth isn’t always that spectacular but there is always growth.”

During the performance, the students twittered and whispered, clapping and bouncing lightly in the plush, padded seats. Their comfort level was palpable.

Another time in the concert hall, deVries recalled the transformation of a particular class, who had been given bow ties to attend the shows. Poised and dashing, they had come to understand what the program works so hard to impart: The Charleston Gaillard Center is truly theirs.