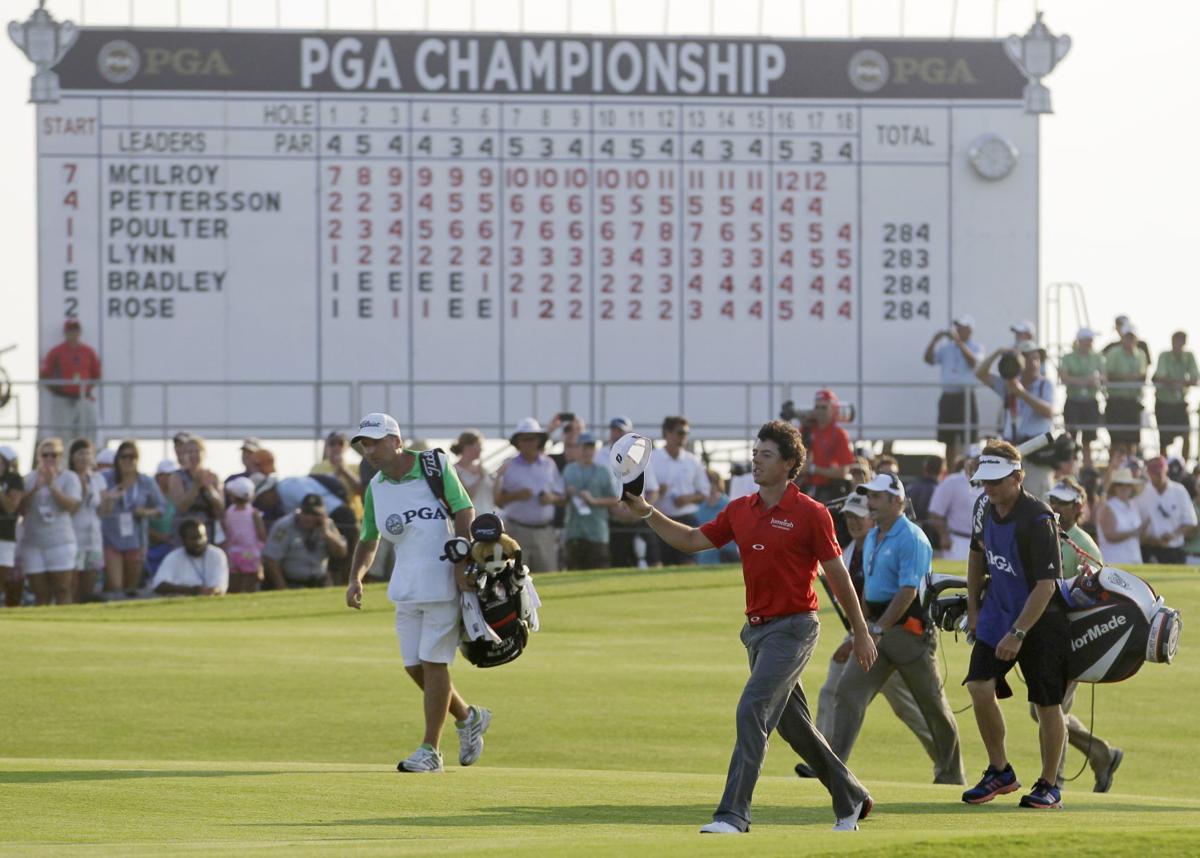 Rory McIlroy walks past the scoreboard on his way to the 18th green and victory in the final round of the 2012 PGA Championship at the Ocean Course. Staff/File 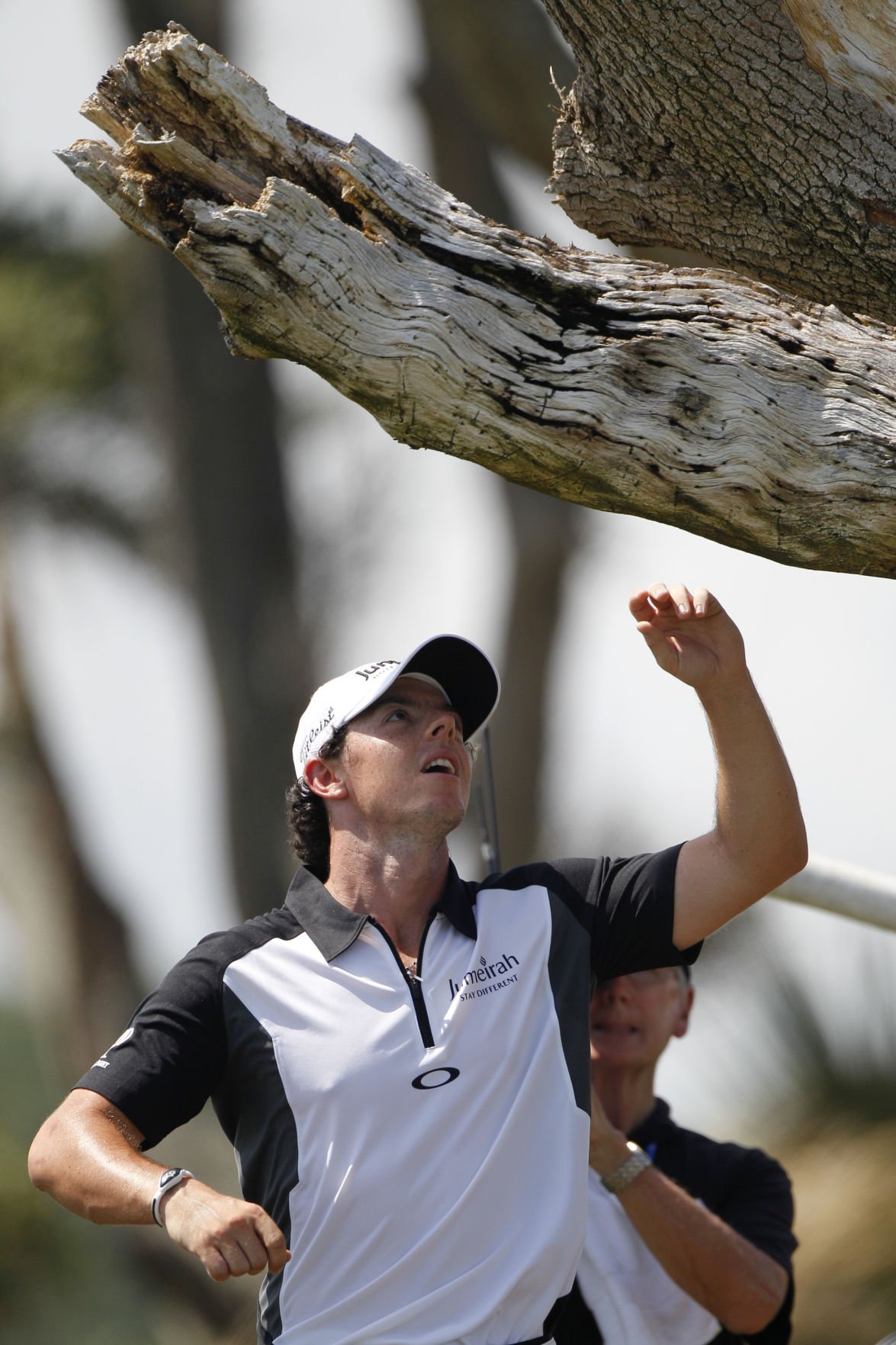 Rory McIlroy finds his ball lodged in a tree on the third hole during the third round of the PGA Championship golf tournament on the Ocean Course on Aug. 11, 2012. File/AP

The most classic examples of great golf timing:

• Bobby Jones looking for the ideal spot to host a new national tournament as the owners of Augusta’s Fruitland Nurseries are willing to sell 365 acres of perfect ground “lying here all these years,” Jones said, “waiting for someone to come along and lay a golf course on it.”

• Carl Spackler, the Bill Murray character in “Caddyshack,” jumping ship in Hong Kong and making his way over to Tibet just as the Dalai Lama himself is looking for a caddy.

And now Rory McIlroy snapping out of an 18-month slump just in time for the 2021 PGA Championship at Kiawah Island’s Ocean Course, and just as a sense of fan normalcy returns to the PGA Tour.

Oddsmakers are calculating: McIlroy, who got the second of four major wins at the 2012 PGA Championship at Kiawah, last week went from 20-1 for the May 20-23 tournament at the Ocean Course to a 10-1 favorite just ahead of Dustin Johnson and Jon Rahm (12-1) and Bryson DeChambeau and Justin Thomas (14-1).

The same Northern Ireland native who set a PGA Championship record with an eight-shot victory in 2012 is back, sizzling.

This is more Kiawah fun than an alligator loose on the 18th green.

McIlroy’s Wells Fargo Championship win in Charlotte on May 9 was the 19th of his career but first since 2019.

Forward means a little backward; less fixation with chasing the kind of distance the bulked up DeChambeau has made famous.

More vintage Rory, a popular player since he burst onto the golf scene as an 18-year-old pro in 2007. McIlroy hit 70 percent of his greens at the Wells Fargo, helpful habits entering play at a Pete Dye-designed masterpiece that is the breezy Ocean Course.

At PGA Championship, a new generation of stars will tackle the Ocean Course

“But in this analogy Rory throws a hell of a lot closer to 100 (mph) than Greg Maddux did,” Van Pelt said. “I didn’t understand searching for more swing speed. It made no sense. You already hit it as far as anyone needs to, and your good enough is good enough.”

McIlroy figured it out at Quail Hollow in Charlotte.

“It’s certainly great timing,” McIlroy said. “This is obviously a huge confidence boost going (to the PGA Championship) knowing that my game is closer than it has been.”

Do not discount the golf fans element.

A Charlotte crowd that was larger than seen at most PGA Tour events over the last year of COVID-19 restrictions seemed to give McIlroy a boost.

“It was a very, very pro Rory gallery and he fed off it big-time,” said Dottie Pepper, the former Furman and LPGA standout who worked the Wells Fargo for CBS.

Some tour players – Dustin Johnson, for instance – don’t seem much impacted by fan noise. McIlroy is more like Tiger Woods, a spotlight star.

“He loves to show off,” North said.

PGA Championship officials won’t announce attendance totals for the sold-out tournament, a spokesperson said this week, but Ocean Course capacity will “accommodate about half” the capacity of the 2012 PGA Championship.

That’s enough to get loud.

The louder the better for McIlroy.

“At the highest levels of the game, these top players are performers,” said Jim Nantz, who will call the PGA Championship for CBS. “They’ve not only gotten comfortable with winning and being on the biggest stages and claiming the biggest trophies in the sport, but they’ve gotten to a point where the crowd being there is kind of a part of the experience for them.”

He’s no longer dating tennis star Caroline Wozniacki, as he was while blowing away the PGA Championship field in 2012. McIlroy married former PGA of America staffer Erica Stoll in 2017. Their daughter Poppy was born in September of 2020.

He’s switched caddies since 2012, from JP Fitzgerald to Harry Diamond.

This Rory is a much different threat at Kiawah than the Rory who missed the cut in his last major, at the Masters in April. McIlroy on the Thursday of a difficult week in Augusta hit his father with an errant second shot on the par-4 seventh hole.

Gerry McIlroy laughed about it.

Mr. McIlroy was laughing harder while backslapping friends around the 18th hole in 2012 as his son was finishing up a glorious PGA Championship triumph heard from one edge of the Atlantic Ocean to Northern Ireland.

Rory McIlroy at the PGA Championship

McIlroy at 2012 PGA Championship: 23-year-old won by 8 shots at the Ocean Course, a tournament record for margin of victory

Coming in hot: won Wells Fargo Championship in Charlotte on May 9, first PGA Tour win since 2019