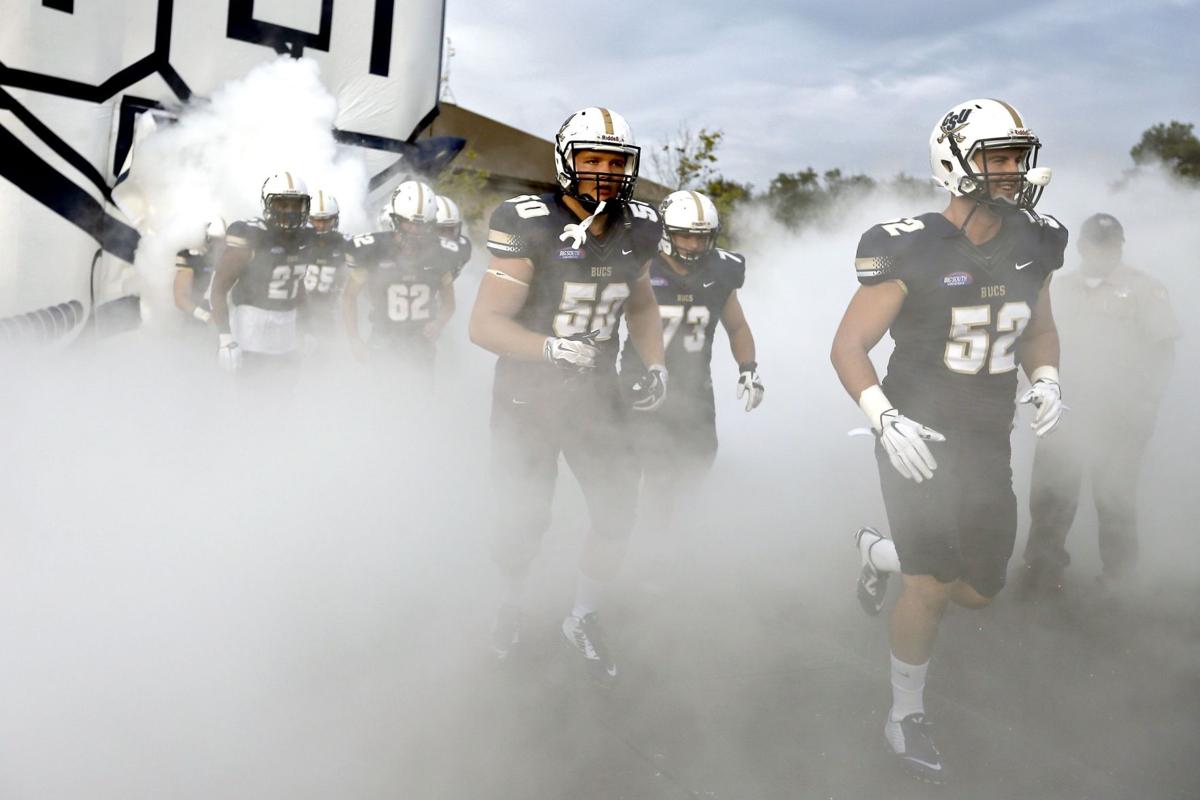 Charleston Southern won Big South Conference football championships in 2015 and 2016 but probably will have those titles vacated after an NCAA investigation. File/Staff 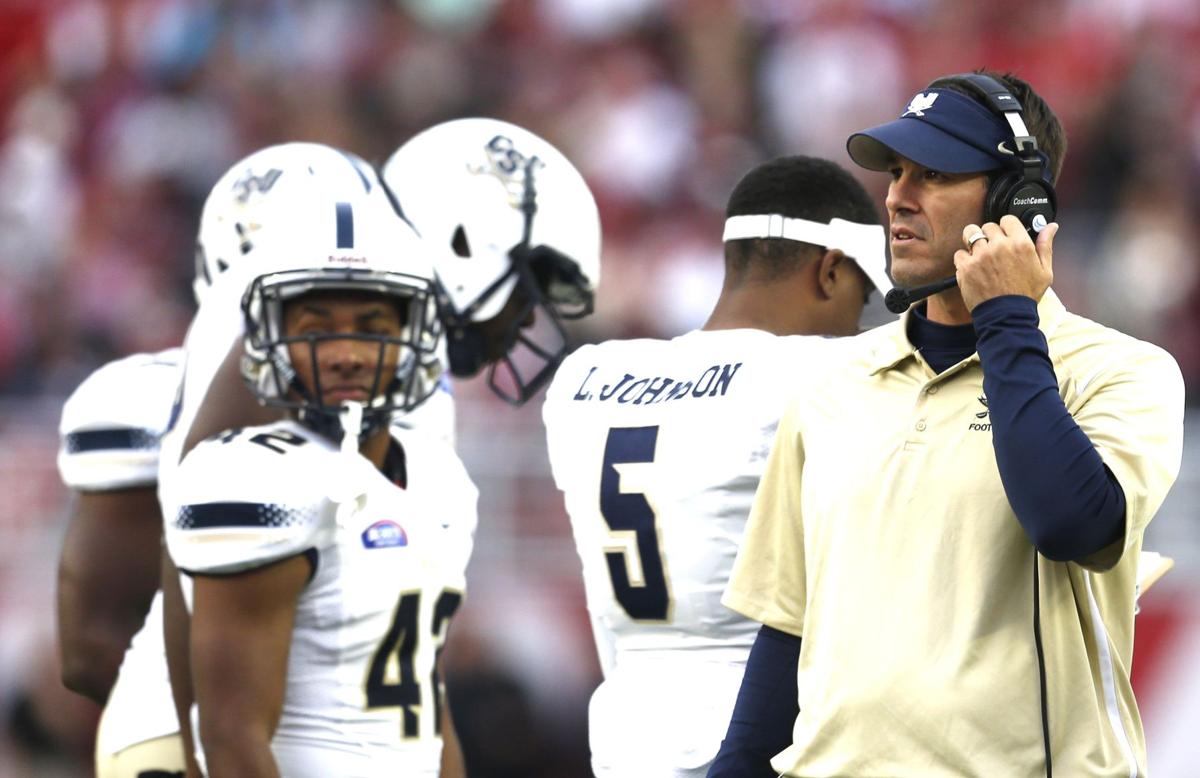 And one says to the other, “Biff, check it out. I have $19.99 left over after buying school supplies with my scholarship money. Maybe I’ll get one of those cool Big South championship T-shirts over there for my mom.”

Alas, our tale ends there before Biff can say, “Stop! Don’t you know NCAA rules! A crime like that might cost our cash-strapped little school scholarships and force us to vacate victories, thus making that T-shirt a misprint!”

CSU this week was zapped with major NCAA penalties for failing to properly certify 21 athletes in such areas as percentage of degree requirements, progress toward degrees and minor but impermissible bookstore purchases over a six-year period. It all amounts to the ruling body of college athletics coming down with its arbitrary hammer on a mom and pop-level operation while major corporation fish are gently returned to murky waters after getting caught making a much larger institutional control splash.

Clearly, some schools have better lawyers than others.

CSU was put on two years of probation, fined $5,000 plus one-half of one percent of the athletic budget, lost six football scholarships over two seasons and probably will have to vacate wins in several sports from 2011-2017. That includes the first two Big South Conference football championships in school history.

Meanwhile, federal prosecutors in New York — not the meek NCAA — are taking the lead in the shoe company scandal that has rocked college basketball.

And zero punishment for North Carolina’s famed basketball program (and other sports) when the NCAA concluded a long investigation last fall into athletes benefiting from fraudulent African and Afro-American Studies classes over almost 20 years.

When Dan Wetzel of Yahoo Sports slammed North Carolina for “perhaps the most outlandish defense in NCAA infractions history” he was joined by a chorus of critics.

Of course, getting tough on big-time college basketball programs and forcing the Tar Heels to take down those 2005 and 2009 national title banners is bad for NCAA business.

Better to make an example out of CSU.

That will teach them in Chapel Hill.

By the way, one of the seven members of the NCAA’s Committee on Infractions that reviewed the CSU case is Belmont University law school dean Alberto Gonzalez, the former U.S. Attorney General in the George W. Bush administration. He has to be laughing at NCAA hypocrisy.

Of course, rules are rules. Playing fair is a sports fundamental.

But how about some common sense?

That’s legit. The NCAA, to its credit, put it well in the report, CSU relied on “an unofficial and unwritten process” blaming a lack of funds but that “commitment to compliance is a basic requirement.”

Better yet, put individual probation clauses on the grown-ups who messed things up for the kids, any coaches or athletic department officials found to have knowledge of rules violations.

Note that former head coach Jamey Chadwell, now the offensive coordinator at Coastal Carolina, is not cited in the NCAA report. And not talking, yet.

“I’m going to finish our season here first,” Chadwell said to The Post and Courier in a text message, “then I’ll have something to comment on.” (Several former CSU players also declined comment but were active in blasting the NCAA on social media).

The Big South is partly to blame here, too. This is at least as much of a smudge on the conference as on CSU. If the Big South suspected CSU was breaking rules as early as 2011, why not make very sure things were up to standard by 2012?

Put the Big South on probation, too.

Wait wait wait.... so you’re telling me, we are getting in trouble for doing what our compliance officer said we could do, then that joker quit when he heard the NCAA found out and he isn’t getting any punishment? But you’re going to strip our wins. Wild. https://t.co/bR1NVmCGoY

“Wait wait wait....,” former CSU wide receiver Colton Korn tweeted, “so you’re telling me, we are getting in trouble for doing what our compliance officer said we could do, then that joker quit when he heard the NCAA found out and he isn’t getting any punishment? But you’re going to strip our wins. Wild.”

It’s six over the next two seasons. So ridiculous to punish current and future players and coaches for past violations.

Plus one-half of one percent of the athletic budget.

Not enough. Hit ‘em where it hurts. A college administration, which spends half its time fundraising, doesn’t care about a few scholarships or title banners.

But money? That will make them pay attention.

And championships. That’s where it hurts for players, the tarnished legacy part. Adding insult to suspension, many Bucs already paid for this: 30 players were suspended over the first three games of the 2016 season.

It became an embarrassing national story when 13 were suspended for the 2016 Florida State game.

It got so silly that safety D.J. Curl was initially suspended, then cleared at 11 p.m. on the Friday night before a Saturday game in Tallahassee. Curl had to fly commercial from Charleston to Tallahassee that morning.

Curl arrived by kickoff for a 52-8 loss, which should count as part of the NCAA’s punishment.

Before you jump to conclusions I really wish people knew the whole story.

It’s just too bad the NCAA is so consistently inconsistent.

For instance, slamming small college players following orders in North Charleston and looking the other way at steady administrative fraud in North Carolina.

Hank Small, CSU’s retired former athletic director, was asked about the football program when this NCAA investigation started percolating in September of 2016.

“I couldn’t be prouder,” Small said. “These athletes and these coaches make me proud every day, not just the way they perform but their character and the way they carry themselves every day.”

Where are they now?

“It still happened,” he tweeted.

Attached to the tweet is a photo of seven CSU players holding a Big South Conference championship trophy.

Reduction of football scholarships by six over the next two seasons.

$5,000 fine plus one half of one percent of the total athletic budget.

CSU likely will have to vacate wins and championships from 2011-2017 in several sports.