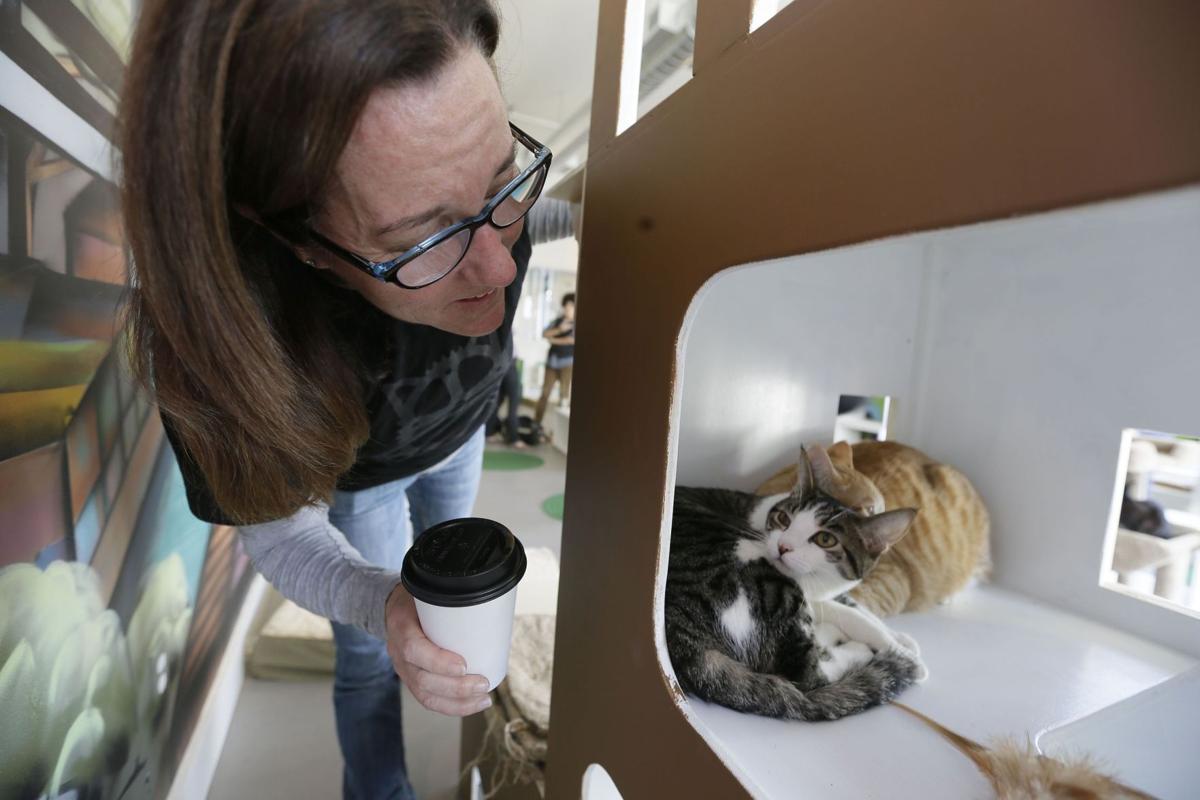 Dawn Piper moves in to take a closer look at a pair of cats at the Cat Town Cafe in Oakland, Calif. Witnessing a cat seizure is a traumatic event for pet parents and the veterinary team, and there are multiple causes for these events. File/AP 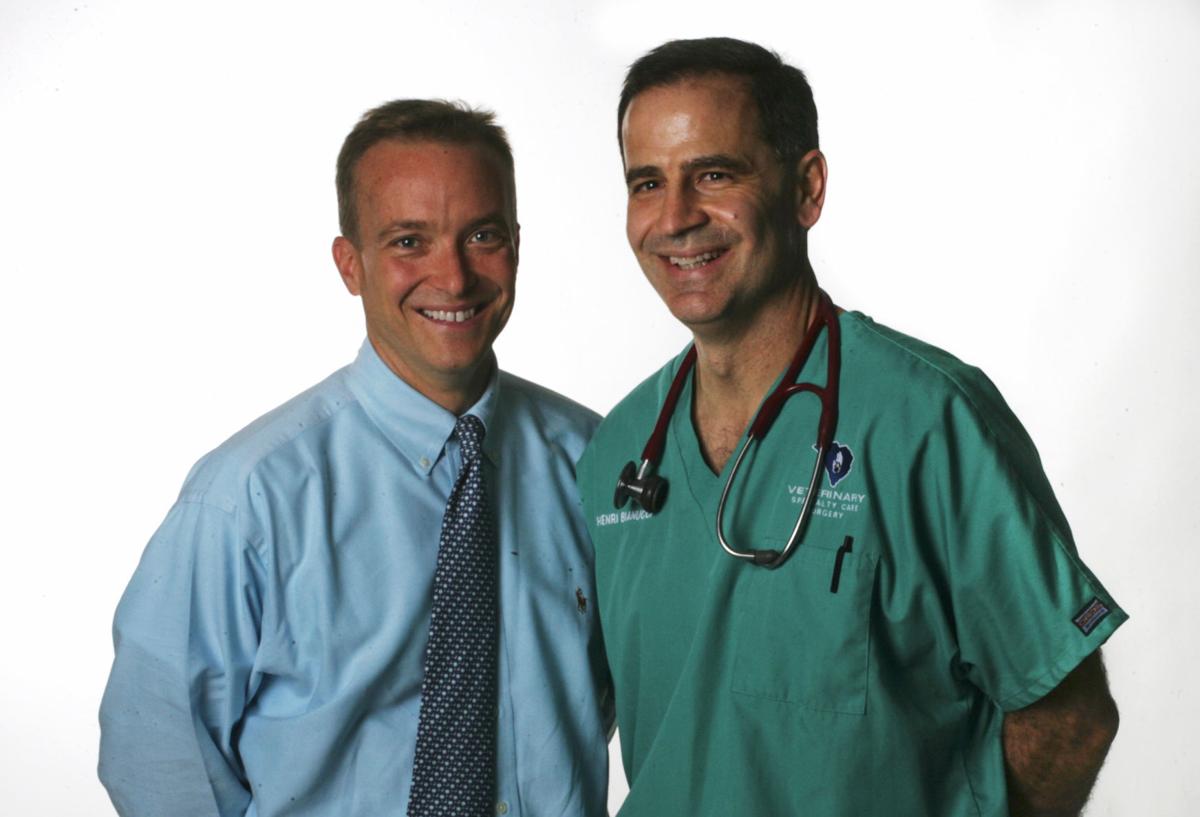 When I (Perry Jameson) arrive at the hospital each morning, the first thing I do is check in with the ICU to see if there are any transfers needing my attention.

One recent morning, I found Sphinx waiting for me.

He is a 3-year-old tabby. Mom came home from work the prior evening to find him disoriented, vocalizing and panting. Any cat doing open-mouth breathing is scary to see, so his mom rushed him to the ER. He was placed in oxygen, as his heavy breathing made lung disease a concern. He settled down overnight, and by the time I saw him the next morning, he was sleeping quietly.

I reviewed the X-rays taken overnight. They revealed no evidence of lung disease. In examining Sphinx, his lungs were clear and he was no longer panting. He did however appear mildly disoriented and he had dilated pupils.

Based on these findings, I suspected his symptoms were secondary to having a seizure and not respiratory disease.

Witnessing a cat seizure is a traumatic event for pet parents and the veterinary team. It is often confusing because they do not always look like seizures in other species, which makes it difficult to determine what is actually happening.

A seizure is a sudden fit of uncontrolled movement. Twitching, shaking and muscle spasms may occur. Cats may lose consciousness and vomit, defecate and urinate during the event. Those are classic signs of seizures. The confusing thing for cats is they may have other symptoms, such as running around, climbing curtains, panting and vocalizing. Episodes may last for only seconds to hours.

Often, there is a period prior to a seizure when your cat will act abnormally. This may be odd behaviors, head-turning, nervousness and hiding. Similar symptoms may occur following the seizure and can last for 24-48 hours.

For many cats, a seizure will happen when there are changes in brain activity. Sleeping, waking, being excited or nearing feeding time are common examples.

There are multiple causes for seizures. I like to divide them into either primary brain disease or metabolic issues.

With a metabolic issue, the brain itself is fine but there is something outside of the brain affecting it. Examples are toxins, low blood glucose, liver disease and low blood calcium.

Pet Docs: Diagnosis, treatment for cancer in dogs has evolved and improved

Primary brain disease results in seizures from brain disease itself. Trauma, infections, tumors, strokes or congenital brain abnormalities may cause changes in the brain, resulting in seizures.

In a small number of younger cats, ages 1 to 4, they may have idiopathic epilepsy where no structural change or inflammation of the brain exists, but they have unexplained seizures.

Unfortunately, idiopathic epilepsy is less common in cats than dogs, so we are always concerned about an underlying problem until proven otherwise.

Even though a cat having a seizure appears like an emergency, most of the time it is not.

Keep cats from injuring themselves but keep from getting bitten or scratched, as some cats become aggressive during the event. Observe the pre-seizure events and what the seizure is like, or, better yet, take a video with your phone. Call your pet’s veterinarian and schedule an appointment.

Occasionally, a seizure is an emergency. This is when it lasts longer than five minutes or when a cat has more than three seizures in a row within 24 hours. If this is occurring, seek help immediately. Also, if they are unable to drink or eat for a prolonged period following the seizure, seek immediate help.

Discovering the cause for your cat’s seizures involves getting a history of any toxin exposure. Basic blood tests will be performed to rule out metabolic and infectious diseases. When these are all normal, a primary brain issue is suspected. An MRI is the best method to assess the brain’s structure.

Collecting and analyzing cerebrospinal fluid, the fluid that bathes the brain and spinal cord, will help diagnosis inflammatory causes for seizures.

Treatment of seizures involves stopping them with intravenous medications if they have a prolonged event. If a metabolic cause can be identified, then treatment of this problem should prevent further seizures.

If a primary brain disease is discovered, it will be directly treated, if possible. Otherwise, the only option is to treat with anti-convulsants. This is also the treatment for idiopathic epilepsy. Rarely are seizures totally eliminated. A realistic goal is reduction in the number and frequency.

Cat’s tolerate these medications well with few side effects. Drowsiness, ataxia, increased appetite and weight gain are common but usually only temporary.

So far, Sphinx has not had a seizure again. I went over all this with his mom and she is ready to test and treat should he have another seizure.