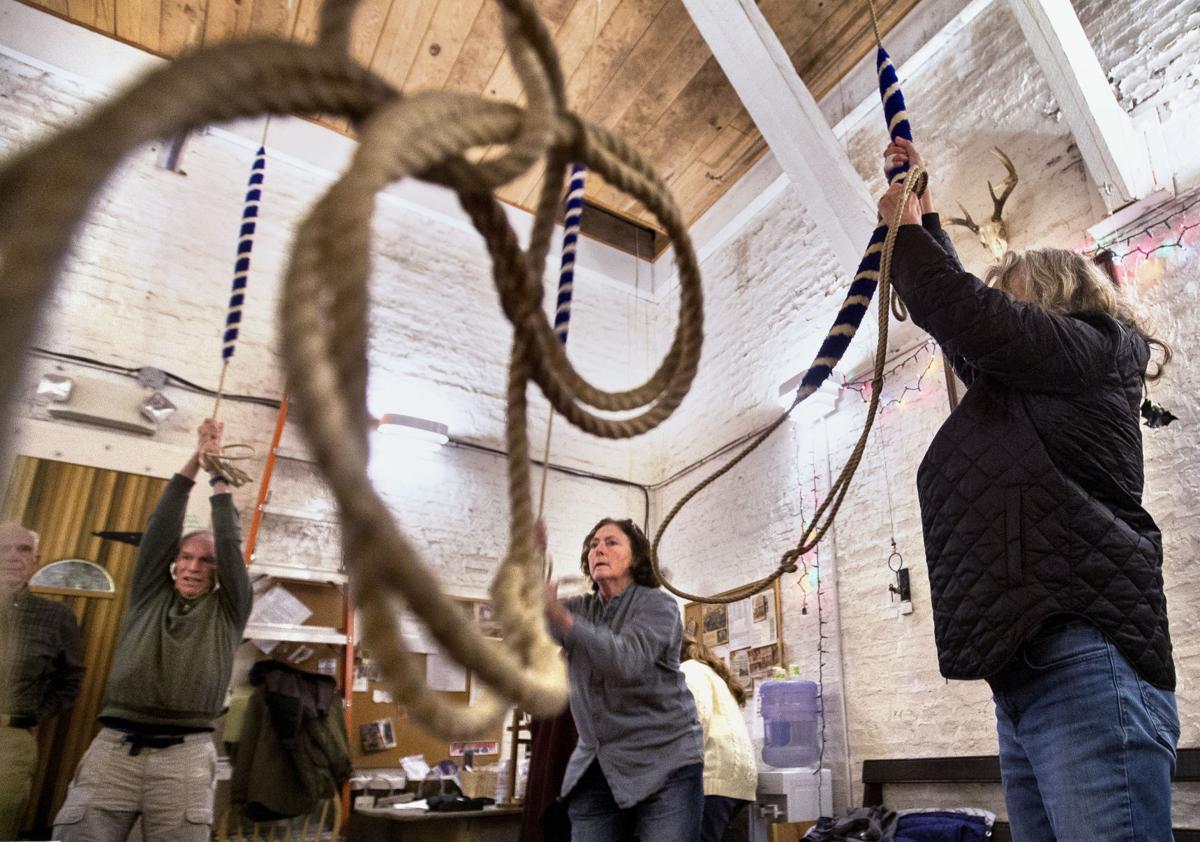 Wood Struthers (from left), Kathy Salmanowitz and Karen Huntz ring the bells inside the bell tower at St. Michael's Church on Thursday, Dec. 19, 2019, in downtown Charleston. St. Michael's is one of four steeples in the Charleston area that have bells operated by change ringers. This church has eight in all. Andrew J. Whitaker/ Staff 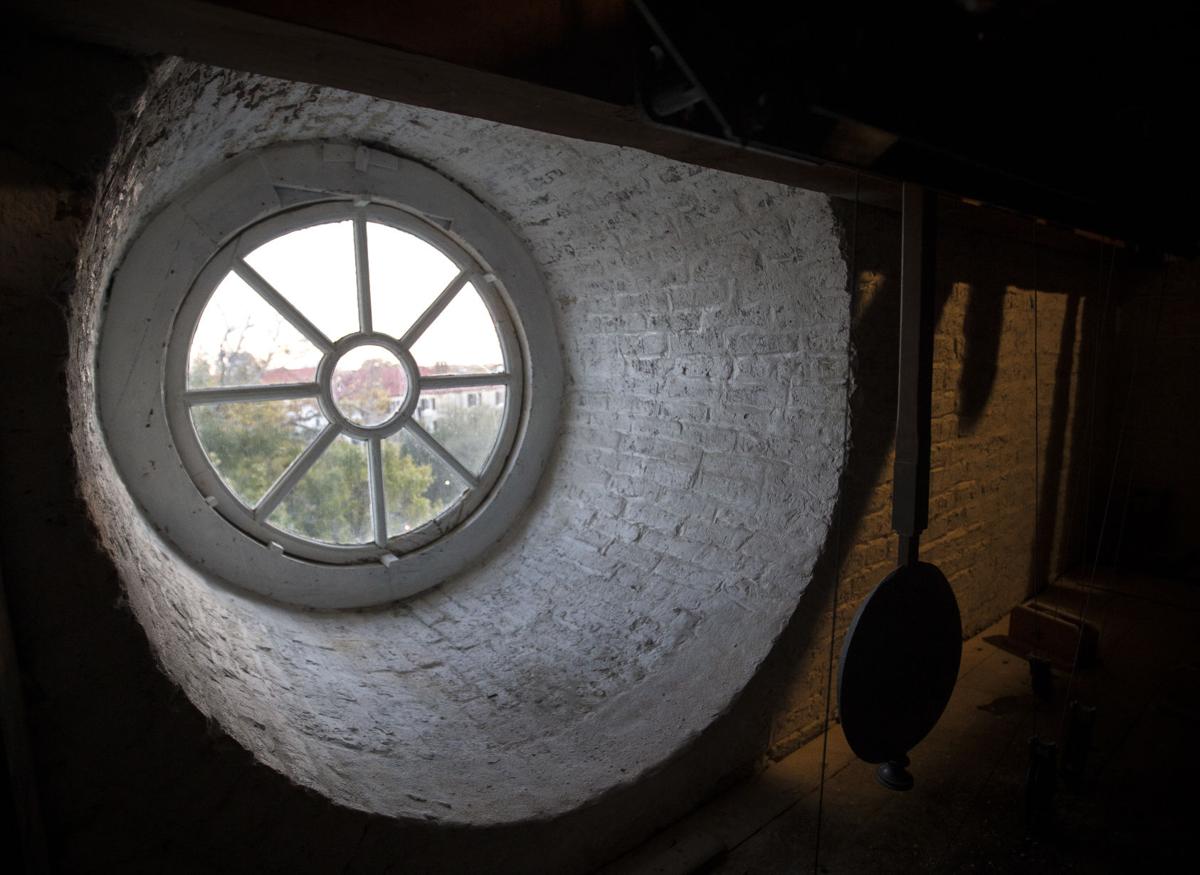 The clock pendulum is seen by the window inside St. Michael's Church on Thursday, Dec. 19, 2019, in Charleston. Andrew J. Whitaker/ Staff 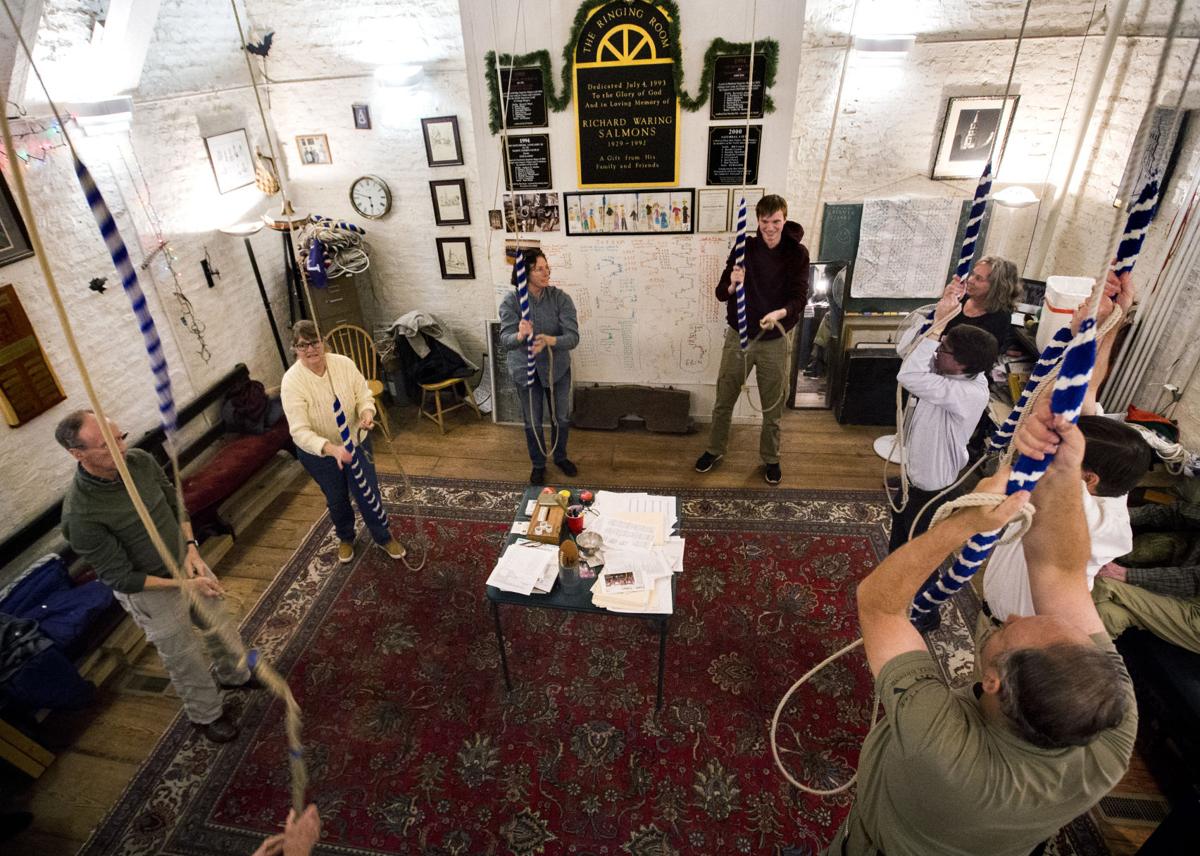 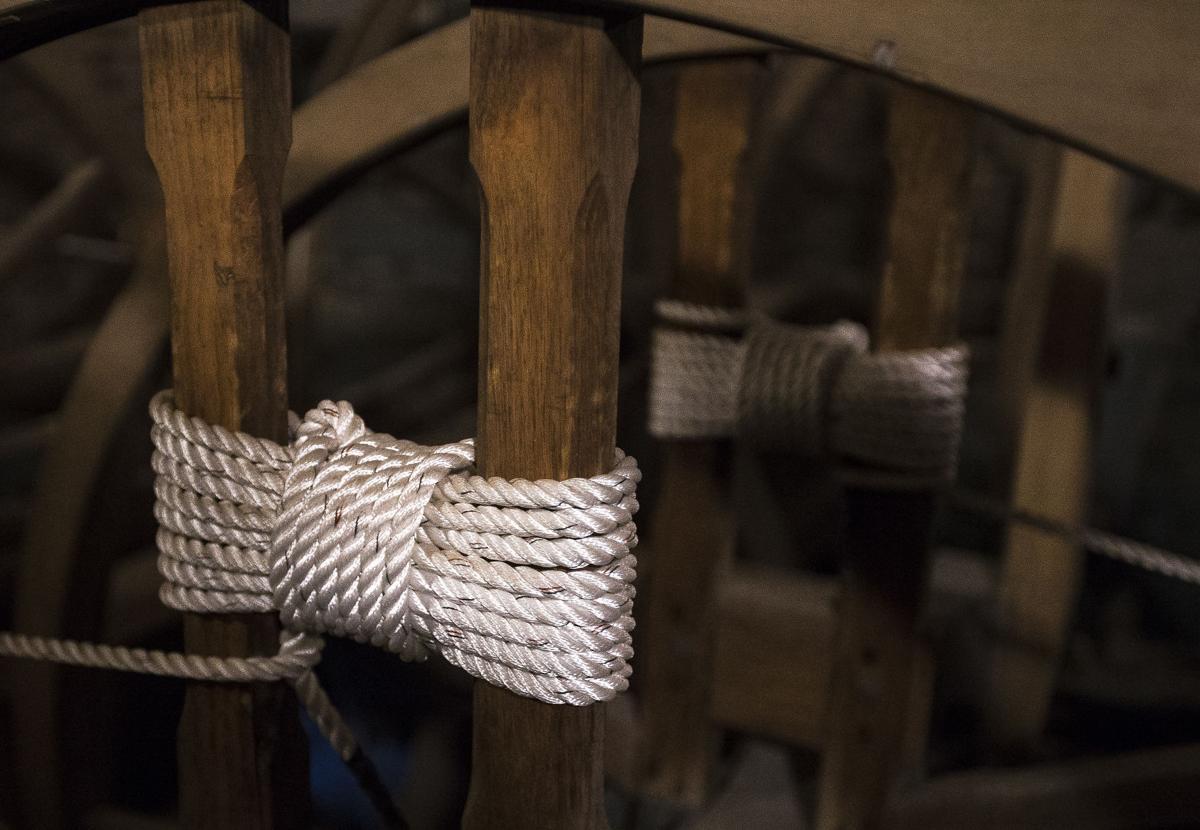 Inside the bell tower at St. Michael's Church on Thursday, Dec. 19, 2019, in Charleston. Andrew J. Whitaker/Staff 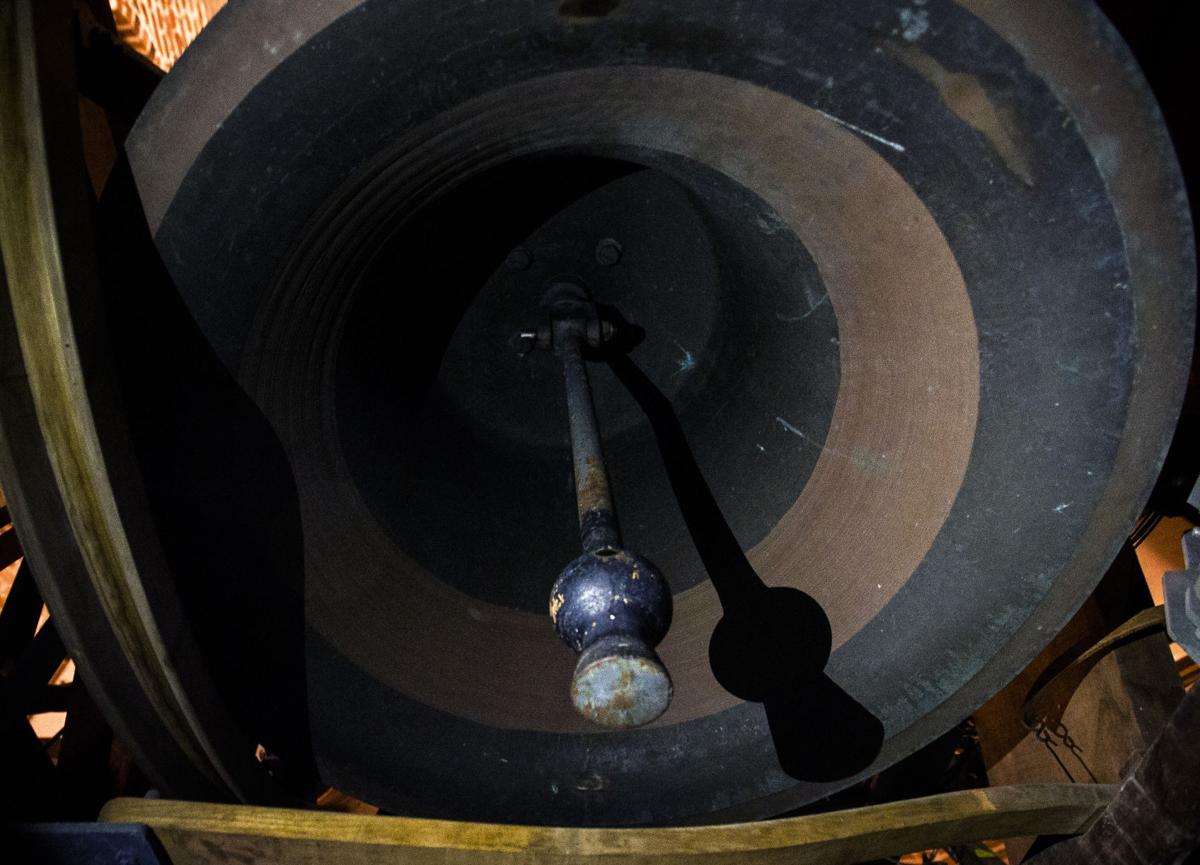 The 1,943-pound tenor bell, also called Michael, hangs with seven others inside the steeple at St. Michael's Church in Charleston. Andrew J. Whitaker/Staff

On New Year’s Eve, many around Charleston will slip into their glittery finest to clink glasses and peck cheeks. Some might cozy up with families before a flat screen to watch that iconic ball plummet from its Manhattan peak.

But at the stroke of midnight at St. Michael's Church, a handful of others will be tucked up in the spare white brick ringing chamber, standing stick straight in a circle, minds alert and primed for change ringing. They are St. Michael's ringers, who will literally ring in the new year at the 11:30 evening service on Dec. 31.

They will each fix their focus on a rope's sally, the part covered in fluffy blue-and-white fabric, and manage its tail, the uncovered end of the rope that is knotted to suit the height of the handler. To get going, they will leverage their body weight to pull and pull, putting in motion massive bells in a tower above them, obscured from sight, whose sound is subdued by a wooden ceiling.

With each vigorous pull, the bell will swing on its wooden frame pendulum-style until the force of its own momentum pushes it to almost 360 degrees as clapper meets cast bronze to ring clear, loud and proud.

Remaining at attention while grasping and pulling, the ringers will heed numbers called out by a designated leader, and do so time and time and time again, rendering the intricate patterns from called changes. And all eight of them will perform with meticulous timing, working bells of various sizes.

Current residents within listening distance will be treated to joyous, mathematically pristine quarter peals and occasional peals as so many others have at intervals over the past 250 years.

Spanning an octave from the E-flat treble bell called Seraphim, which weighs 509 pounds, to the E-flat tenor behemoth Michael, boasting 1,943 pounds, the main function of their chiming at St. Michael's is liturgical. They have sounded for services there since 1764, and having laid silent for long spans, too, due to war or wear and tear.

It's true, the bells are set to sound automatically on each quarter hour throughout the day. However, for the rhythmic rounds that issue forth from the so-called change-ringing method that tops off church services and more, these bells won't ring themselves.

But forget requesting "Stairway to Heaven." Change ringing is percussive in nature, with rhythmic, memorized, near-incantatory sounds that seem to fold over and chase one another. While playing patterns rather than harmonies, the band appears to be in a sort of meditative, trance-like state.

"It's not musical. It's order," said Wood Struthers, a former commercial pilot who has been ringing since he retired in 2007.

"You get in a zone," said C.J. Cantwell, the affable, no-nonsense tower captain who has been transfixed with the art form since the bells were first repaired in England and made ready to ring again in 1994.

Beyond the ringers' liturgical duties, they regularly mark local traditions, such as Carolina Day, and have mourned national tragedies, such as the Emanuel AME Church shooting. For these, the St. Michael's bells often ring in unison with the three other churches in the Charleston metro area that have them: Grace Church Cathedral, the Cathedral of St. Luke and St. Paul, and Stella Maris Roman Catholic Church. There is also talk of plans to get them swinging for the city's 350th anniversary celebration.

Weddings are a particular favorite with many in the group of ringers. Easter, which involves numerous services, is a very long day.

At a recent practice, chatter filled the room as ringers arrived and cheerily chimed in to various conversations with the ease of a family gathering. They are game to help me learn the ropes, as it were, though the ins and outs of change ringing are, like the bells in the tower, over my head. They show me how the eight ropes are held in position above them in a round wooden holder known as a spider.

Hicks column: Good tidings to you, from your friends in local law enforcement

They set about to play "Queens," a pattern that has been around since the 1500s. Along the way, someone in the circle carps, "I never get the bell I want."

I'm handed a piece of paper containing the organization of the methods, as the music is called. Unlike a standard piece of sheet music, these are denoted vertically, with a series of numbers for each bell and one line wending left then right, then returning in a mirror image from whence it began.

“Do you know needlepoint? It’s like a Bargello,” said ringer Wendy Fernau, referring to the pattern comprised of zigzag stitches.

“I was drawn to the symmetry,” said Cantwell, an architect by vocation who notes the connection between her day job and ringing. At St. Michael's, there are professions from commercial pilot to photographer.

However, forget getting Cantwell to draw any conclusions about who makes a good ringer. Instead, she firmly asserts they come from all walks of life, and have done so since the early days in England, which I take means change ringing's emergence in the 17th century.

Cantwell runs a tight ringing chamber and points out lags and gaffes to me.

"You hear that?" she somberly nods her head. I am not altogether confident that I do.

It is absolutely consumptive, someone observes, noting how it involves every sense except for smell and how orderly it is by way of its mathematics.

It occurs to me heading into the new year that perhaps I can glean something from both the rigor and the results of the change ringers’ efforts and attempt to coax from them some practices. Cantwell proceeds with a bit of good-natured suspicion.

"Ring intentionally," she had offered earlier, cautioning against sloppiness, and I seize upon it as a life maxim. Struthers had offered that timing is everything.

Fernau cautioned about the importance of treating each bell as an individual. A centuries-old bell has its quirks, with some requiring more finesse than others. To get the best from each, you must approach them uniquely.

After observing a new ringer, Cantwell shares a guiding ethos of the band, which is that "you are only as good as your newest ringer." Change ringing is a collective effort. I see a team-building exercise in the offing.

Whether you're up for similar resolve in whatever you pursue in 2020, take heart in the fact that at St. Michael's, change ringing in the new year will resound for us all.