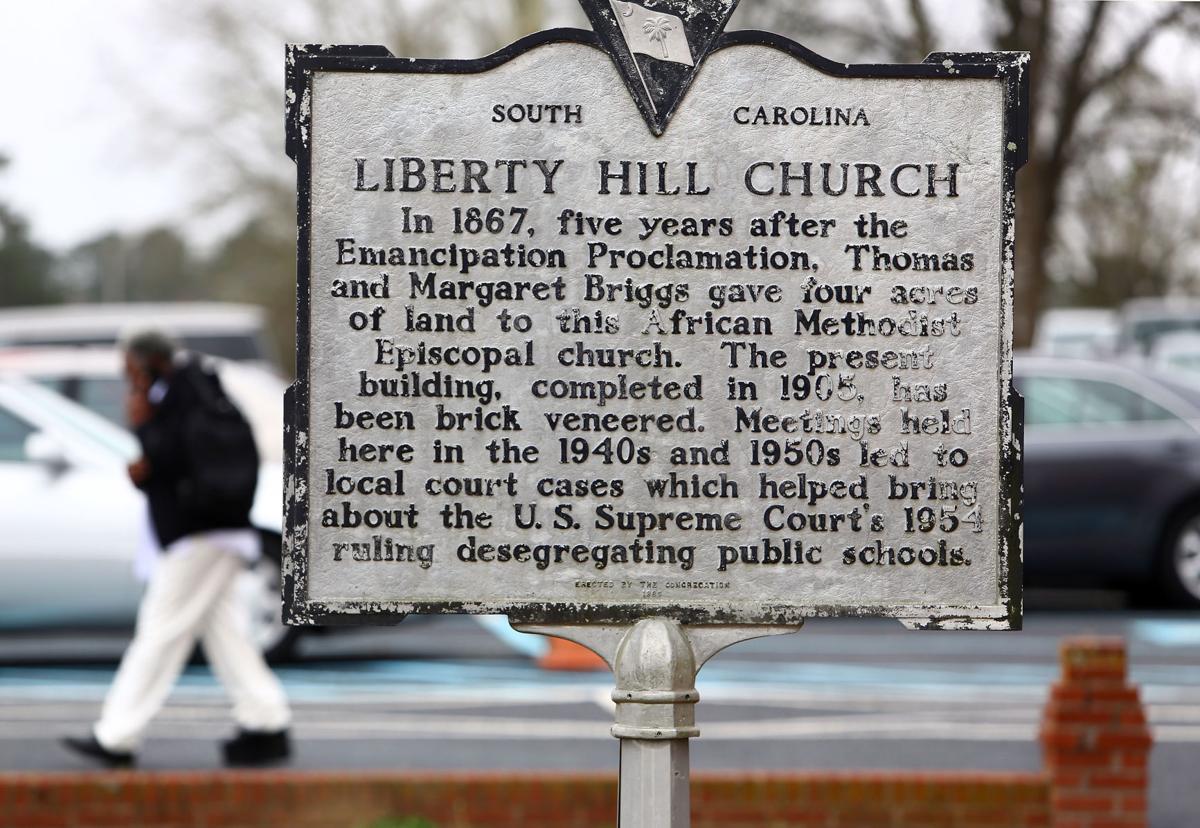 On Sunday, Feb. 17, 2019, Liberty Hill AME Church in Summerton hosted the unveiling of a guide which highlights significant sites in the efforts of black parents — in the late 1940s and early 1950s — seeking educational equality for their children in Clarendon County schools. Wade Spees/Staff 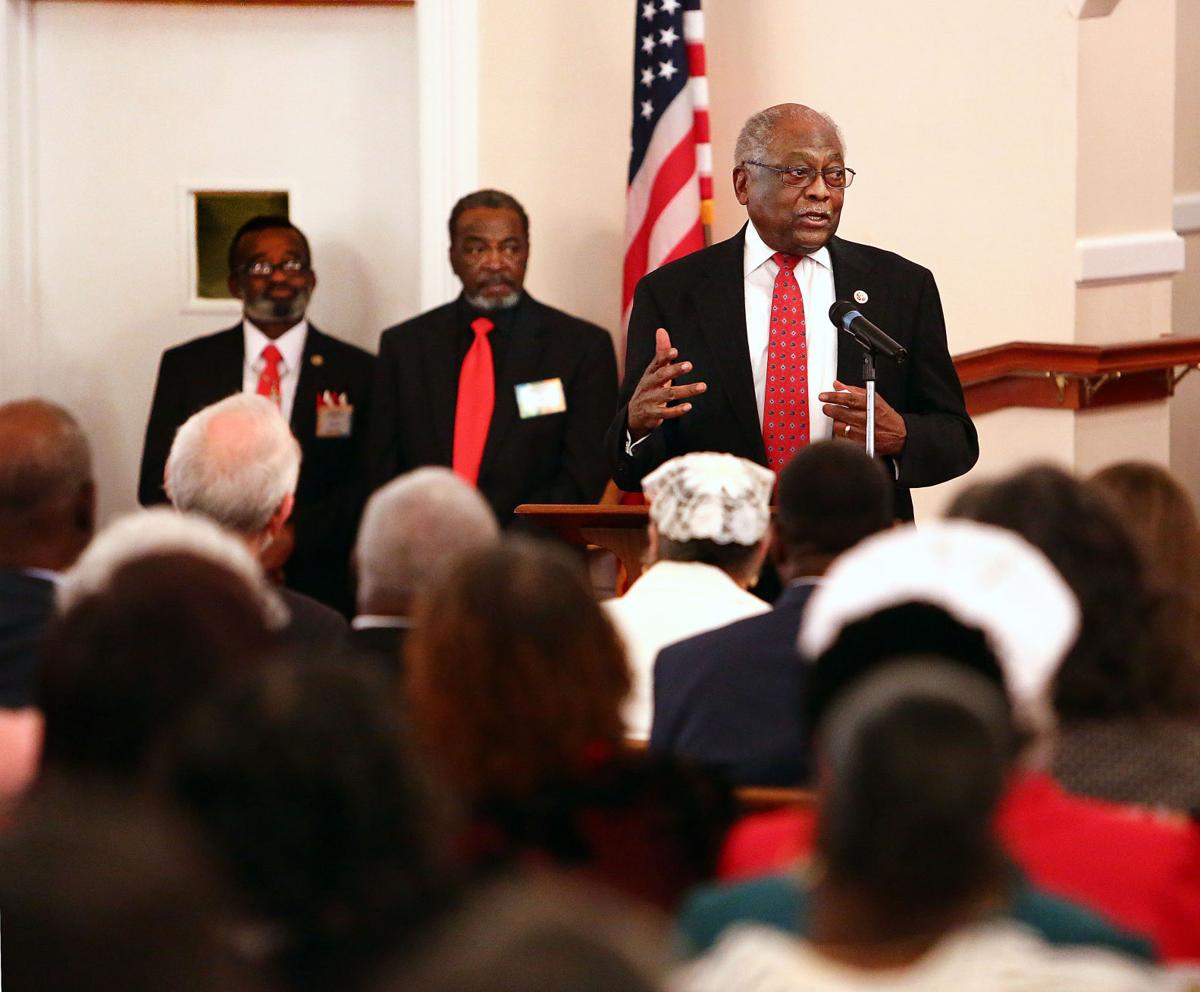 Congressman James E. Clyburn spoke in Summerton in 2019 when the area unveiled a new brochure with significant sites related to the fight for public school equality in the late 1940s and early 1950s. File/Wade Spees/Staff

On Sunday, Feb. 17, 2019, Liberty Hill AME Church in Summerton hosted the unveiling of a guide which highlights significant sites in the efforts of black parents — in the late 1940s and early 1950s — seeking educational equality for their children in Clarendon County schools. Wade Spees/Staff

Congressman James E. Clyburn spoke in Summerton in 2019 when the area unveiled a new brochure with significant sites related to the fight for public school equality in the late 1940s and early 1950s. File/Wade Spees/Staff

Congressman Jim Clyburn has spent most of his life trying to promote a chapter of South Carolina’s least known — and most important — history.

He’s written a book about the state’s crucial role in the early civil rights movement, bestowed congressional honors on forgotten heroes … even changed the name of Charleston’s federal courthouse in recognition of its importance to the era.

And this past week, he made a strong case for putting that story on the nation’s biggest stage.

Clyburn asked a subcommittee of Congress’ Natural Resources Committee to add two Clarendon County schools to the National Park System. Those schools — Scotts Branch and Summerton High — are where the fight to end school segregation began in the 1940s. What happened there led directly to the 1954 U.S. Supreme Court decision Brown v. Board of Education.

This would, Clyburn said, “provide a more robust, inclusive appreciation of the remarkable bravery that was led by those who integrated public schools.”

He’s absolutely right. Without the people of Clarendon County, there is no Brown v. Board — easily the most important Supreme Court ruling of the 20th century.

It’s fitting that Clyburn’s proposal got its first hearing in the middle of National Parks Week, which ends today. From Acadia to Zion, the 423 sites that make up the federal parks system are among this country’s most important and beloved assets.

When most people hear national parks, they think of those Western giants like Yellowstone and Yosemite … or even the Great Smoky Mountains. But South Carolina is well-represented in the system with seven sites, including two in Charleston as well as the Congaree National Park outside Columbia (one of 63 to achieve premier designation).

Being a part of the National Park System is not just a status symbol; it gives history more legitimacy and an infinitely larger audience. Some folks spend their lives making pilgrimages to these parks, not only because they’re beautiful — but because they tell America’s story.

Clarendon County deserves to be part of that national conversation.

It all started when the Rev. Joseph A. DeLaine, a Summerton educator, began recruiting plaintiffs for a lawsuit that would force the local school district to provide better facilities for African American schools. Back then, they were separate, but weren’t equal.

Because there’s no such thing.

Clarendon County residents including Levi Pearson, Harry and Eliza Briggs and, ultimately, DeLaine himself were shunned, punished and suffered dire consequences simply for asking that they be afforded the same rights as other Americans.

Then-NAACP attorney Thurgood Marshall and Charleston U.S. District Judge Waties Waring turned Briggs v. Elliott into the blueprint for Brown v. Board in Kansas, as well as other school segregation cases in Delaware, Virginia and the District of Columbia.

Those five lawsuits, and Waring’s dissent in Briggs, are Brown v. Board. So Clyburn is asking Congress to add sites here and in those other states to the existing Brown v. Board of Education National Historic Site in Kansas.

The National Historic Trust for Historic Preservation has worked with the congressman on this for years, and it's offered to buy the two schools in Clarendon (both of which are still used as administration buildings). They would be open to the public, at least on a limited basis, since the school district would continue using the buildings as well.

Leslie Canaan, a senior field officer with the National Trust, said a multi-state National Park is nothing new or radical. The Manhattan Project National Historical Park has sites in three states, each of which helps tell the full story of that significant chapter in American history.

Clyburn says that’s the point of linking South Carolina — and Delaware, Virginia and D.C. — to the existing Kansas historic site. Each location would tell the whole story of desegregation, making it accessible to a far larger audience.

Which is exactly what Congress should do.

These things take time, but there seems to be actual bipartisan support for a more diverse telling of American history these days, at least on the House National Parks, Forests and Public Lands subcommittee. And that’s a good sign.

Clyburn is right: For far too long, Clarendon County and its people have been a footnote to American history. It’s time everybody heard their story.

And few places tell better stories than our national parks.