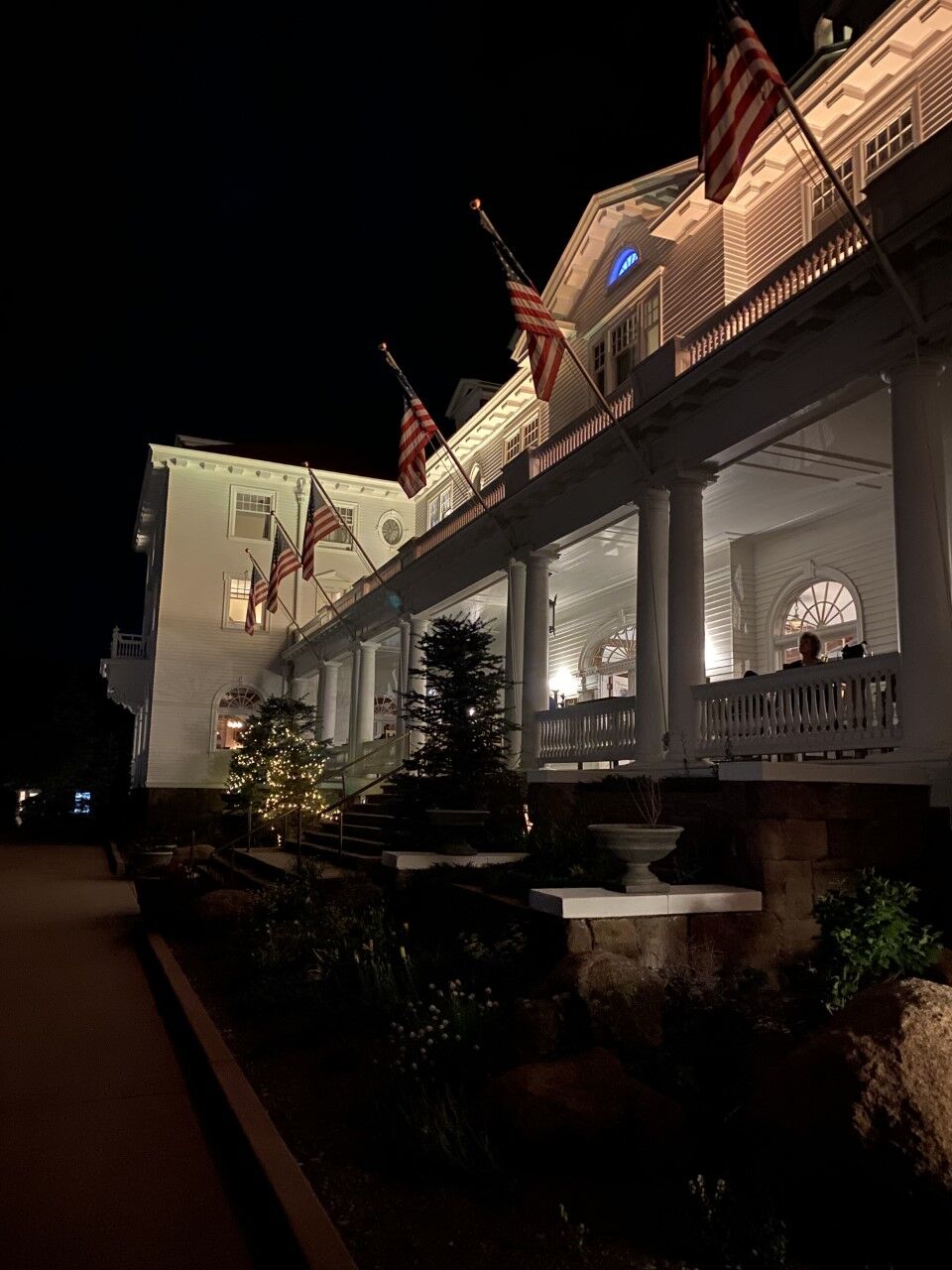 The Stanley Hotel in Estes Park, Colorado, is the inspiration for Stephen King's novel "The Shining" ... and a not insignificant tourist attraction in its own right. The balcony at left belongs to Room 217, the room King stayed in when he got the idea for a book about a haunted hotel. 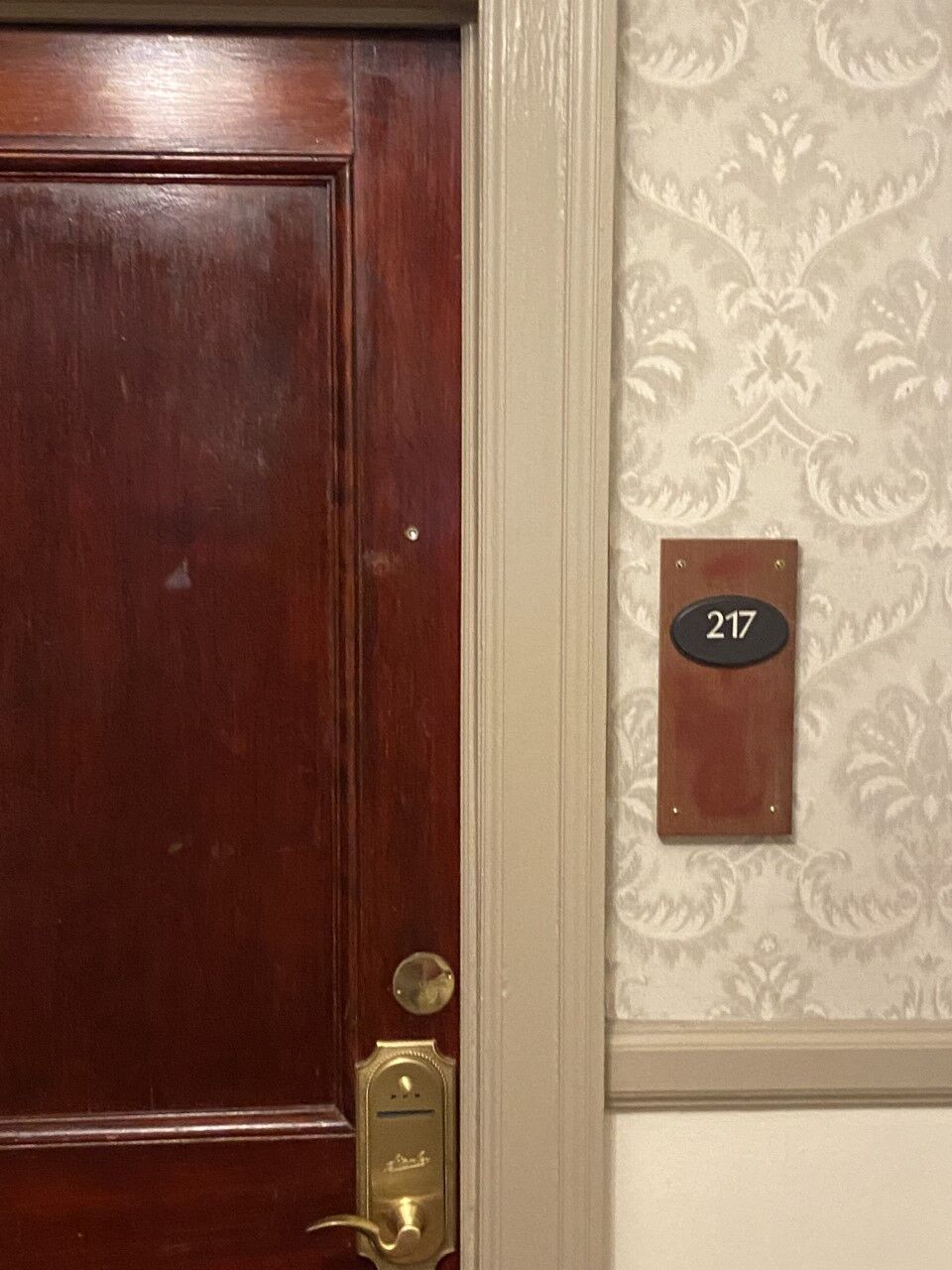 The door to Room 217 in The Stanley Hotel, Estes Park, Colorado. Stephen King stayed in this room the last day of the season, circa mid-1970s, and it inspired his haunted hotel novel, "The Shining."

The Stanley Hotel in Estes Park, Colorado, is the inspiration for Stephen King's novel "The Shining" ... and a not insignificant tourist attraction in its own right. The balcony at left belongs to Room 217, the room King stayed in when he got the idea for a book about a haunted hotel.

The door to Room 217 in The Stanley Hotel, Estes Park, Colorado. Stephen King stayed in this room the last day of the season, circa mid-1970s, and it inspired his haunted hotel novel, "The Shining."

ESTES PARK, COLORADO — When the good folks here at The Stanley Hotel put you in Room 215, you learn the true meaning of horror.

Like, literally Stephen King-level terror. At least from a Charlestonian’s perspective.

See, this hotel was the inspiration for King’s classic novel, “The Shining.” And, in the book anyway, the room where many bad things happen is 217.

AKA, the one next door to me.

I visited this town just outside Rocky Mountain National Park because, as a wise man once wrote, All work and no play makes Jack a dull boy.

That’s pretty much all King’s main character, hotel caretaker Jack Torrance, managed to write on his planned novel after he was possessed by evil spirits infesting the hotel. Who then ordered him to kill his family while they were snowed in for the winter.

Anyone who hasn’t read the book has probably at least seen Stanley Kubrick’s film, which King famously detests … mainly because crazy didn’t seem like much of a commute for Jack Nicholson.

I booked a room at The Stanley because it’s a beautiful, historic colonial revival hotel with a Victorian vibe inside — right down to the creepy photos lining the grand staircase (the kind with eyes that seem to move). OK, I really just wanted to stay because “The Shining” has been a favorite of mine for more than 40 years.

Apparently, pretty much everyone else in the free world had the same idea, because the place was packed. It took a half-hour to check in, so by the time I got a key, the room number didn't even register.

Then I found a ghost tour group leaning against my door, and realized the hall was ground zero for the hotel’s scariest inhabitants: rabid King fans. The tour group laughingly pointed out my address, and claimed Room 215 used to be part of 217 (which people pay nearly double to stay in).

The guide asked that I play along and greet subsequent tours by shouting “Here’s Johnny” or “Redrum” — “murder” backward, as little Danny Torrance chants at one point. They also asked for a report on anything that went bump in the night.

Turns out, many things did — mainly, the incessant procession of tourists knocking on the door to 217, and slamming into mine, late into the night.

A ghost might’ve at least been quiet.

Although The Stanley is ranked the No. 1 haunted hotel in America, and claims all manner of benevolent and mischievous haunts in residence, it seems most people come to see the room where King conjured his own ghosts.

The place was so busy I couldn’t even get into the bar where a nefarious spirit served King’s character, uh, nefarious spirits. Jack Daniel’s, to be precise. All waiting and no Jack makes … you get the idea.

Folks who work around The Stanley — it’s an entire complex with a real hedge maze these days — say the number of tourists they’re seeing this summer is staggering even for them. But, unlike Charlestonians, they weren’t complaining.

Maybe because I was one of those tourists.

Even with the crowds, everyone in Estes Park seemed to be in a good mood. And it wasn't just the absence of humidity. Even the cops directing some serious traffic were smiling. With good reason. All those visitors were shoveling money into their otherwise remote town. A stay at The Stanley runs about the same as a night at Charleston Place.

Aside from pandemic aberrations, Estes Park sees about 4.6 million tourists a year. That may not sound excessive compared to Charleston’s 6 million, but consider the scale. Estes Park — 1,700 miles away and 7,500 feet higher in elevation — is not quite 7 square miles … with a population of less than 7,000.

On a per capita basis, that’d be like Charleston getting 88 million tourists annually. Now, that’s scary.

Perhaps Charleston should adopt more of the Estes Park attitude. Tourism is an important economic generator here, as it is for Charleston. Instead of constantly complaining about crowds, maybe we should thank our visitors for subsidizing city operations.

That is, so long as they don’t block the streets … or bang on our doors in the middle of the night. And provided Stephen King doesn’t get the bright idea to set his next book in, say, the Rutledge House Inn. That would be murder.

Or, as they say around here, Redrum.