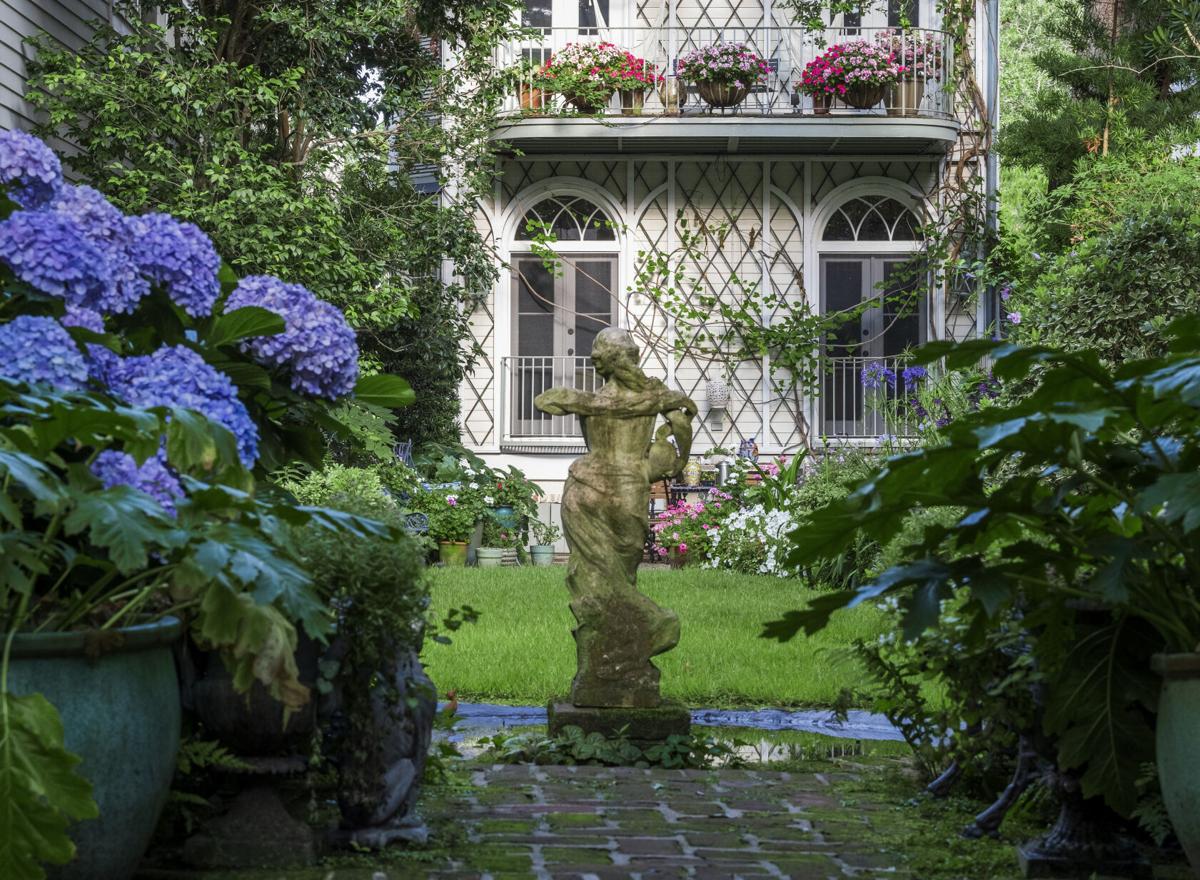 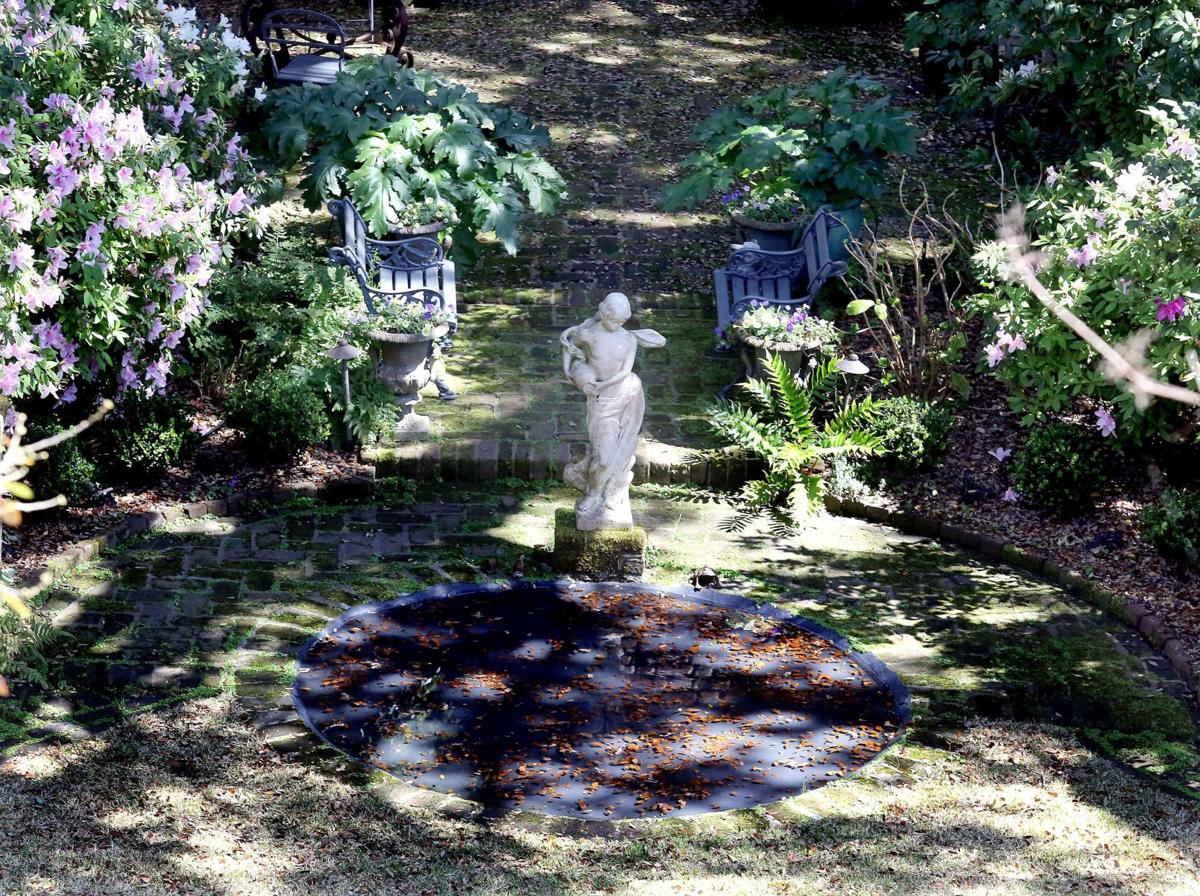 While much of the plants have changed in the garden behind 58 Church St., its hardscape, including the circular pool, brick border and segmented sections, remain. File/Brad Nettles/Staff

Charleston is known for its architectural treasures because there wasn’t enough money around after “The War” to tear them down and start anew. By the time there was money to do that sort of thing, a preservation movement had taken hold which, one way or another, and depending on whom you ask, has created a legacy of approximately 2,800 historic buildings and eight architectural styles. In round numbers, about 100 buildings predate 1776 and 1,000 predate 1861.

That’s an amazing statistic — 1,000 antebellum structures. What tends to get overlooked is the quality of many of the gardens affiliated with these structures. Charleston’s semi-tropical climate makes it a thriving paradise for a broad variety of native and exotic plants, including camellias, crepe myrtle, azaleas, Japanese plums, Lady Banksia roses and dogwoods.

Gilbreth column: Historic ‘Charles Town’ poem one for the ages

The variety of aromatic stimuli greeting the nostrils at varying times during the spring and fall is astounding and represented by citrus, tea olive, wisteria, pittosporum, magnolias, vitex, an assortment of roses, Confederate jasmine (and I’m begging susceptible persons not to be “triggered” by the reference), clematis, gardenias, oleanders, ligustrum, Chinese fringe trees and banana shrubs.

Although the spectrum of shrubbery, trees, grasses and vines that do well locally is most impressive and reflective of the natural word’s unparalleled beauty and genius, credit of course must also be given to talented green-thumbed gardeners who put in an hour or more of time on a near daily basis, and also brilliant landscape architects over the years who have helped create these magnificent slices of heaven.

I’m particularly envious of the great landscape and garden architects. Although an admirer of (most) styles of building architecture, it’s too abstract for me. In other words, I wouldn’t have any talent for that sort of thing and don’t suffer by looking at a great building and remarking to myself, “Oh, why didn’t I think of that?”

Landscaping is different to the extent that the canvas is there and the observer is given clues to work with, whether realizing it or not. If fortunate enough to pick up on some of those clues, one might formulate ideas about how to put them to use and come to believe that the ideas are pretty good. Which they probably are — at least until compared to those generated by someone who really knows what they’re doing.

This is how I feel every time I look at the work of Loutrel Briggs, perhaps Charleston’s foremost 20th century landscape architect. Born in New York, he graduated from Cornell in 1917 and ended up establishing an office in Charleston in 1929, where he worked for 40 years and designed some 100 gardens — many of which are (or were — more on that later) masterpieces.

Briggs’ first Charleston commission was in 1929 and concerned the garden of Cornelia Witsell Farrow Roebling, widow of bridge engineer Washington Augustus Roebling, at 64 South Battery. The final product was a hit and led to immediate word-of-mouth referrals and subsequent commissions. This would include, of course, Emily Whaley’s famous garden at 58 Church St. (now maintained by her daughter Marty W. Cornwall), which many would consider in peak form to be one of the loveliest spots on Earth.

According to the book “Mrs. Whaley and Her Charleston Garden” (written by William Baldwin), Briggs asked a few basic questions: Do you want a formal or casual garden? How much space should be devoted to bulbs, annuals and perennials? How much space for azaleas and camellias? Do you want a patio? Do you want blooms throughout the year or concentrated in certain months?

That was it. In 10 minutes Briggs had a design outline and 10 days later submitted blueprints and a crayon-colored sketch as to what the garden might look like 10 years hence. The rest was left up to Mrs. Whaley and her invaluable assistant, Junior Robinson. As is the case with many of Briggs’ creations, the garden casts a spell and mood with its various “rooms,” shadows and fragrances, and does so while reflecting the style of rare artistry.

Sadly, not just a few of Briggs’ garden designs have been either transformed or degraded over the years, making one wonder what, if any, guidelines are in place to protect rare and valuable outdoor creations? To this day I look at the Briggs garden and think to myself, wow, if only I could envision something of this quality just once over a lifetime — much less in the span of 10 minutes.

Edward M. Gilbreth is a Charleston physician. Reach him at edwardgilbreth@comcast.net.