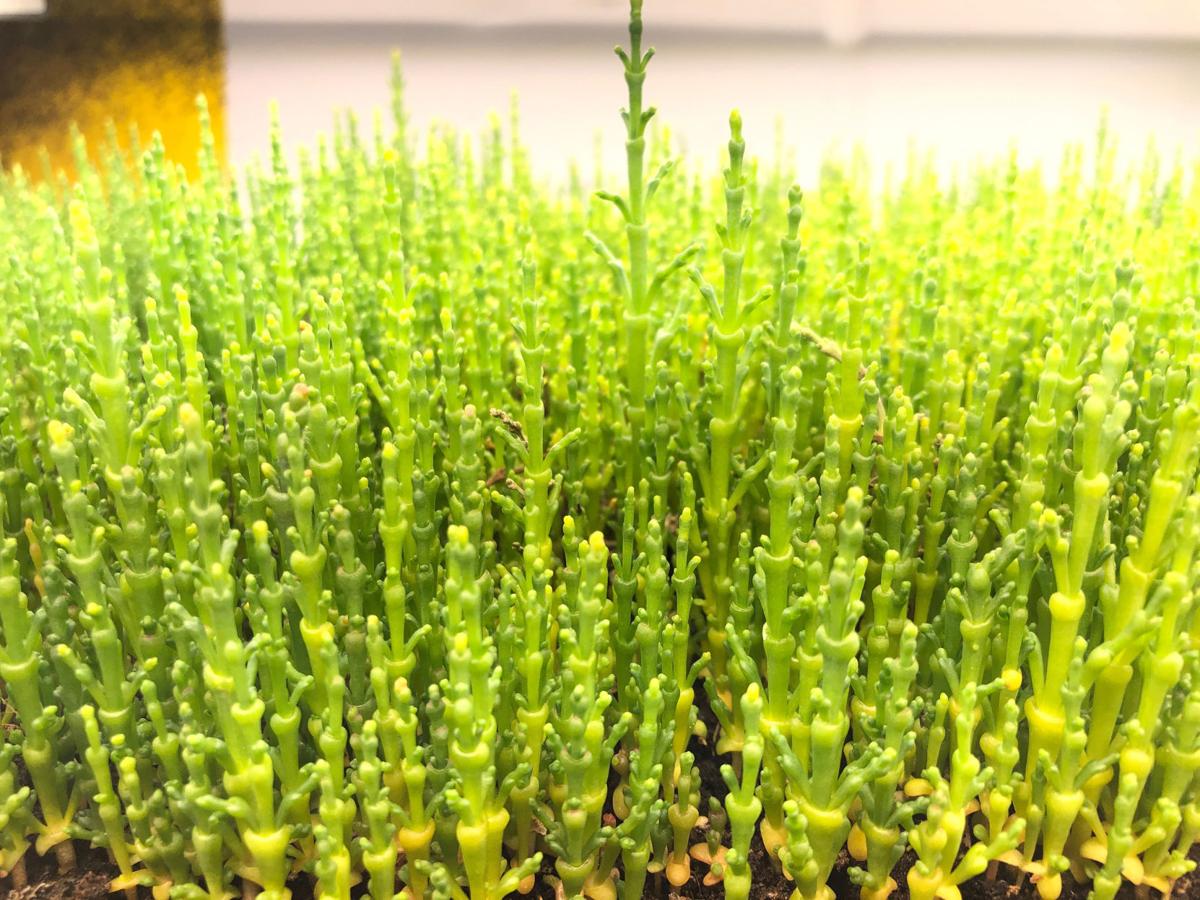 Sea beans grown in a hydroponic system which feeds the plants a layer of nutrient solution on a timed schedule. Lindsey Clarke/Provided 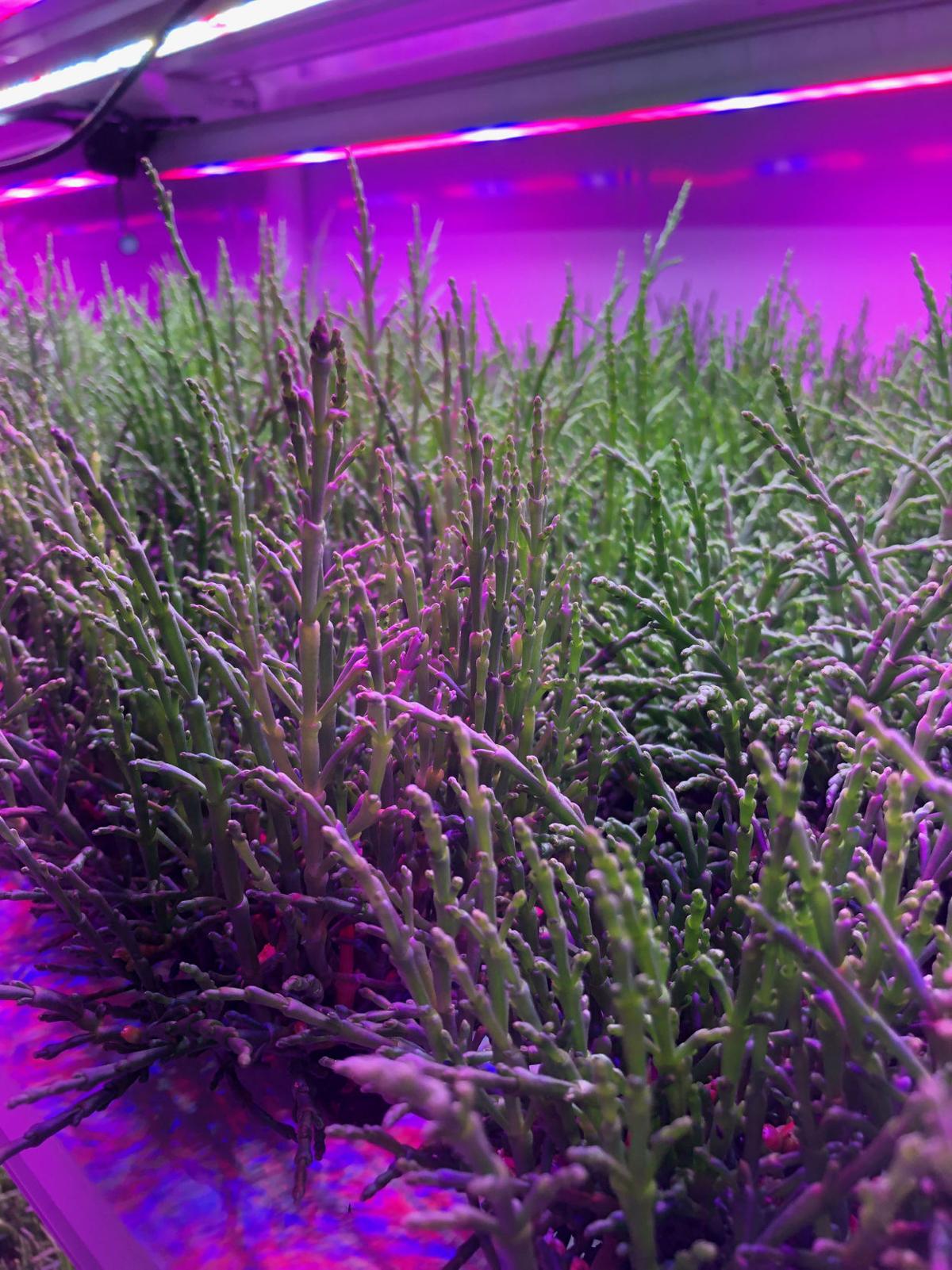 The halophytes pull salt from the soil, which transforms the ground into a habitable region for other plants. Lindsey Clarke/Provided 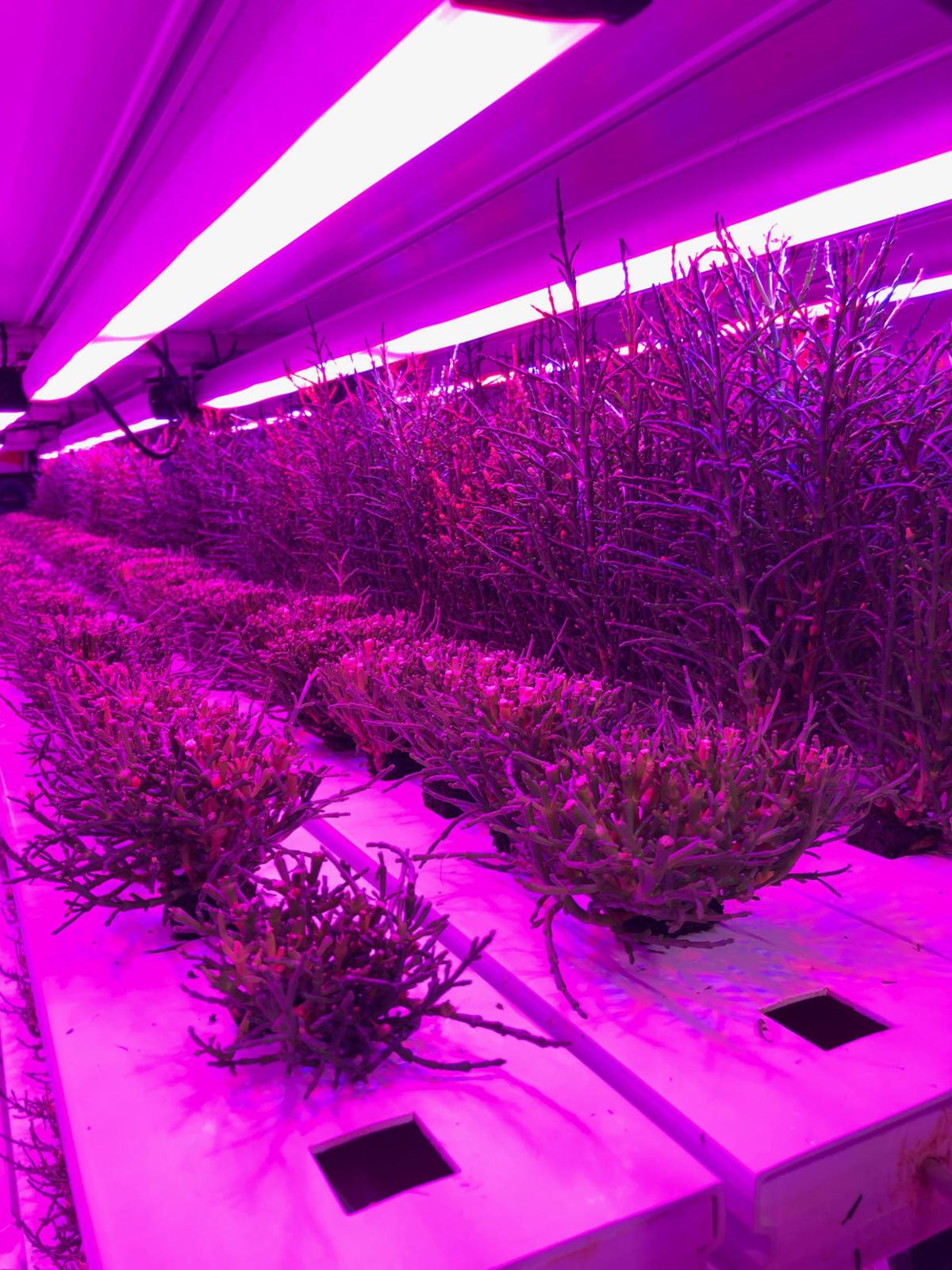 The tips of sea beans are fleshy and can be cooked or eaten raw. The stems are used in gose-style beer which gives it a salty flavor. Lindsey Clarke/Provided

Sam Norton is the founder of Heron Farms. He did his graduate research on halophytes, which includes sea beans, also known as sea pickle. He’s not your typical farmer. He wears a white lab coat and nitrile gloves. He’s more of a farming scientist and, like many good scientists, affectionately refers to the crop by its genus rather than common name, Salicornia.

Sea beans are succulent halophytes that don’t produce beans or pickles. The foliage is edible and salty. Succulents are plants that store water in their leaves. Halophytes tolerate saline conditions. And as halophytes go, sea beans are among the saltiest.

Sea beans grow in hypersaline soils that are uninhabitable for most plants. They are the first plant into a barren salty flat. As it pulls salt from the soil, it transforms the ground into a habitable region for other plants and, over time, sea beans are crowded out. As a crop, this makes it difficult to farm outdoors.

A shipping container can grow 4,800 plants. While sea beans are their main crop, they are growing four new halophytes and plan to grow as many as 35. They use a hydroponic system called nutrient film technique that only uses 20 gallons of water a week. Plugs of sea beans grow in plastic channels, or gutters, three inches apart. A thin layer of nutrient solution cycles through the channels on a timed schedule.

The foliage tips are harvested three times from seed to the final cut in 60 days. These are the fleshy parts that can be cooked or eaten raw. The stems are woody and don’t have much of a culinary use, but breweries have used them in gose-style beer for a salty flavor.

With a proficient research background, Sam is maximizing production within the confines of a shipping container. He and his team follow every plant, from seed to harvest, and study the effects of light, nutrients, spacing and other environmental factors.

Because it’s controlled environment agriculture, they triple the atmospheric carbon dioxide, a primary input in photosynthesis, to maximize growth. Fans keep air flowing to reduce disease and increase gas exchange. The system is fully automated, continuously adjusting nutrients and pH as solution is pumped through the rooting channels. The water is chilled to control root disease.

The only insect problem is fungal gnat larva, which are small maggots that feed on the roots. They are controlled by sealing cracks along the door and yellow sticky cards that attract the adults.

Light is their primary focus. Indoor growers have traditionally focused on red and blue light, the spectrums primarily involved in photosynthesis. But their analysis has revealed that full spectrum light, or white light, significantly increases growth.

This makes sense. Even though red and blue light drives photosynthesis, plants evolved in the full spectrum of sunlight.

The team's goal is to maximize every photon of light with reflection shields and strategic spacing. And because they track the growth of every single plant, they know the precise effects of placement and light quality. So far, the research suggests an expenditure in high quality lights will quickly return their investment in growth.

As he casually showed me impressive charts and analysis of data, he explained the effect of photosynthetic photon flux density. I told him it had been 20 years since I’d done research, so please talk normal. So he said "usable light." We were back on track.

Gardening: Cultivating roses worth the challenges

As Norton and his team of researchers fine-tune their production, he was enthusiastic about the addition of Trident Tech horticulturists. Wooters, he explained, solved a growth discoloration on the first day.

It’s a fine combination of science and growers working together to produce a hardy plant we have growing in marshes of the Lowcountry. Just don’t expect any pickles.