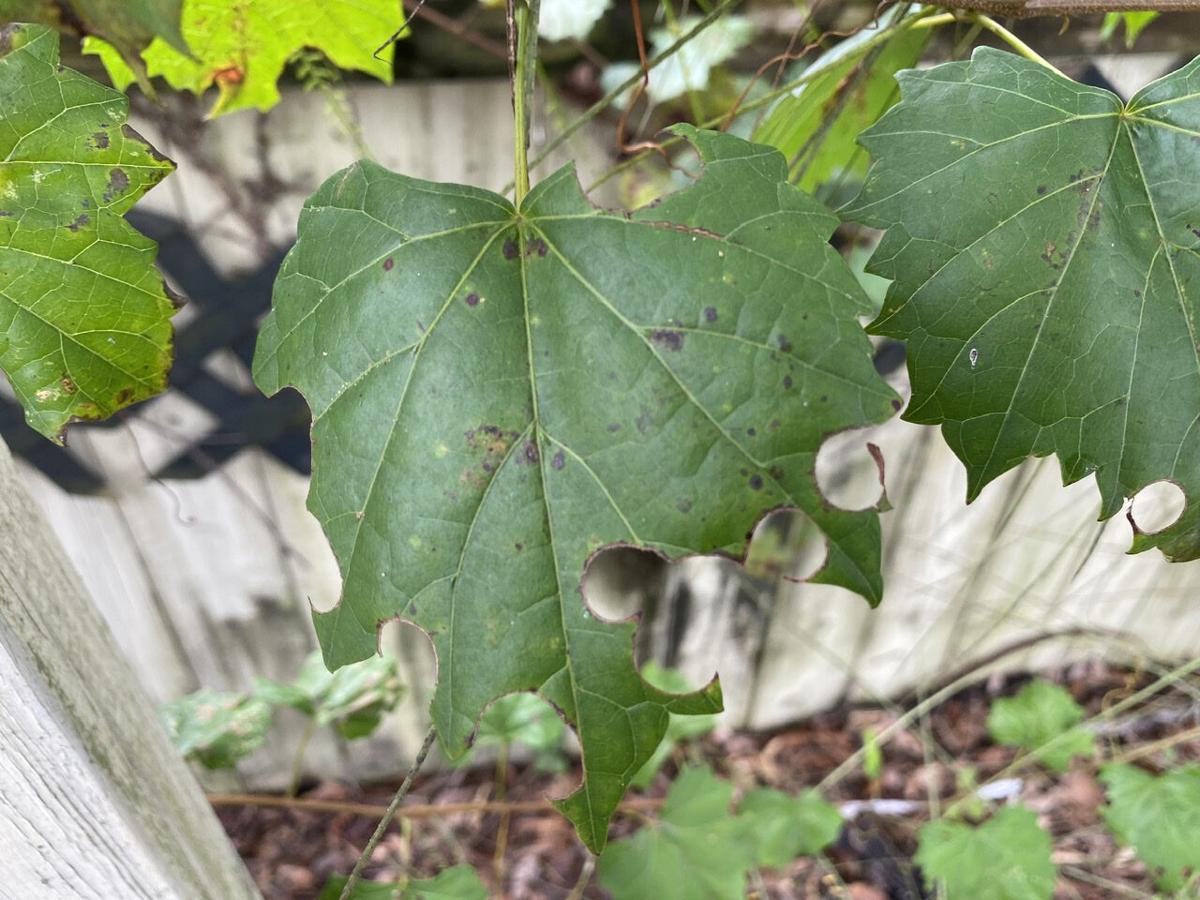 Damage on this grapevine leaf was done by a leafcutter bee. The foliage is used to build nests for her eggs. Tony Bertauski/Provided 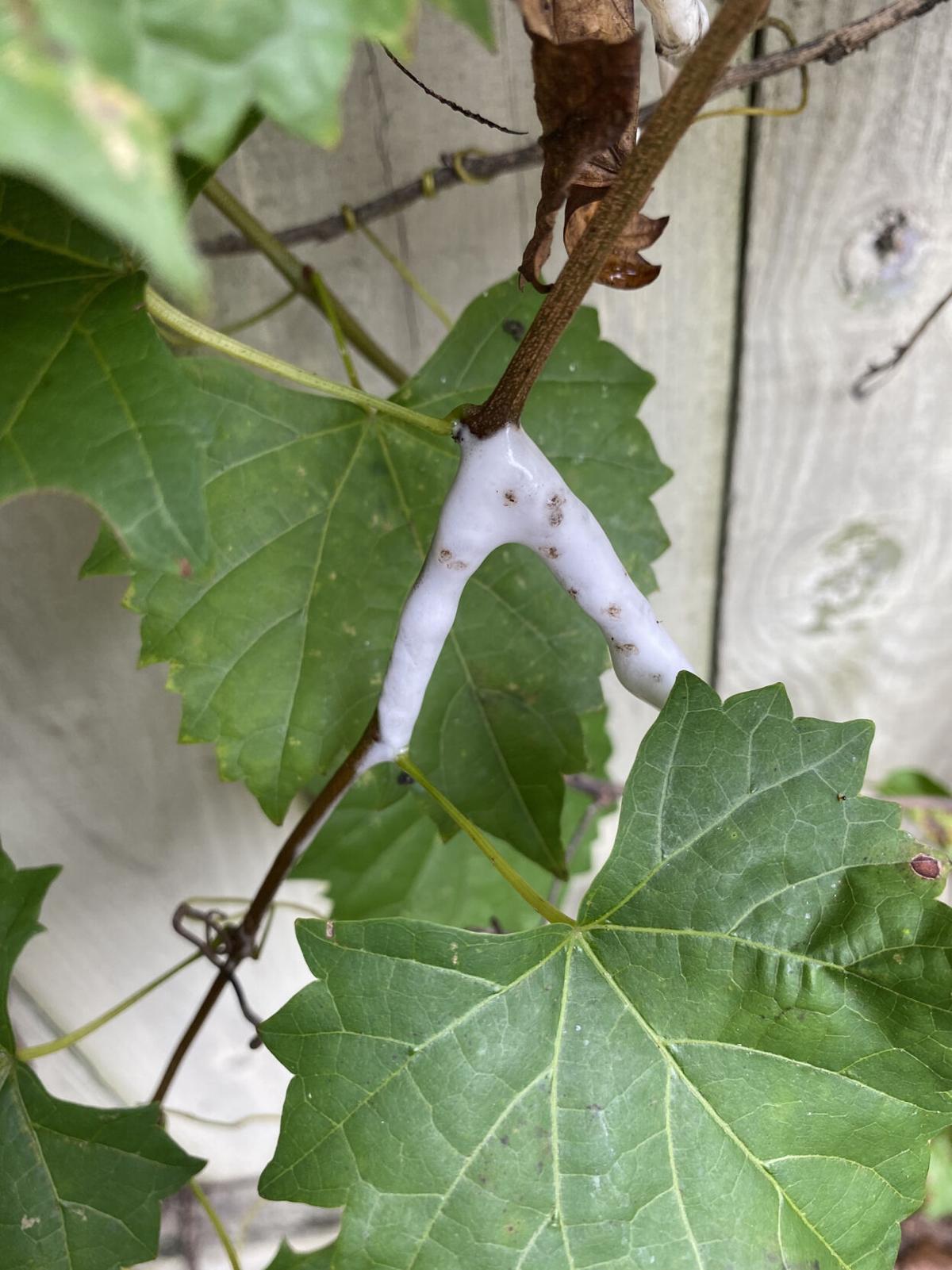 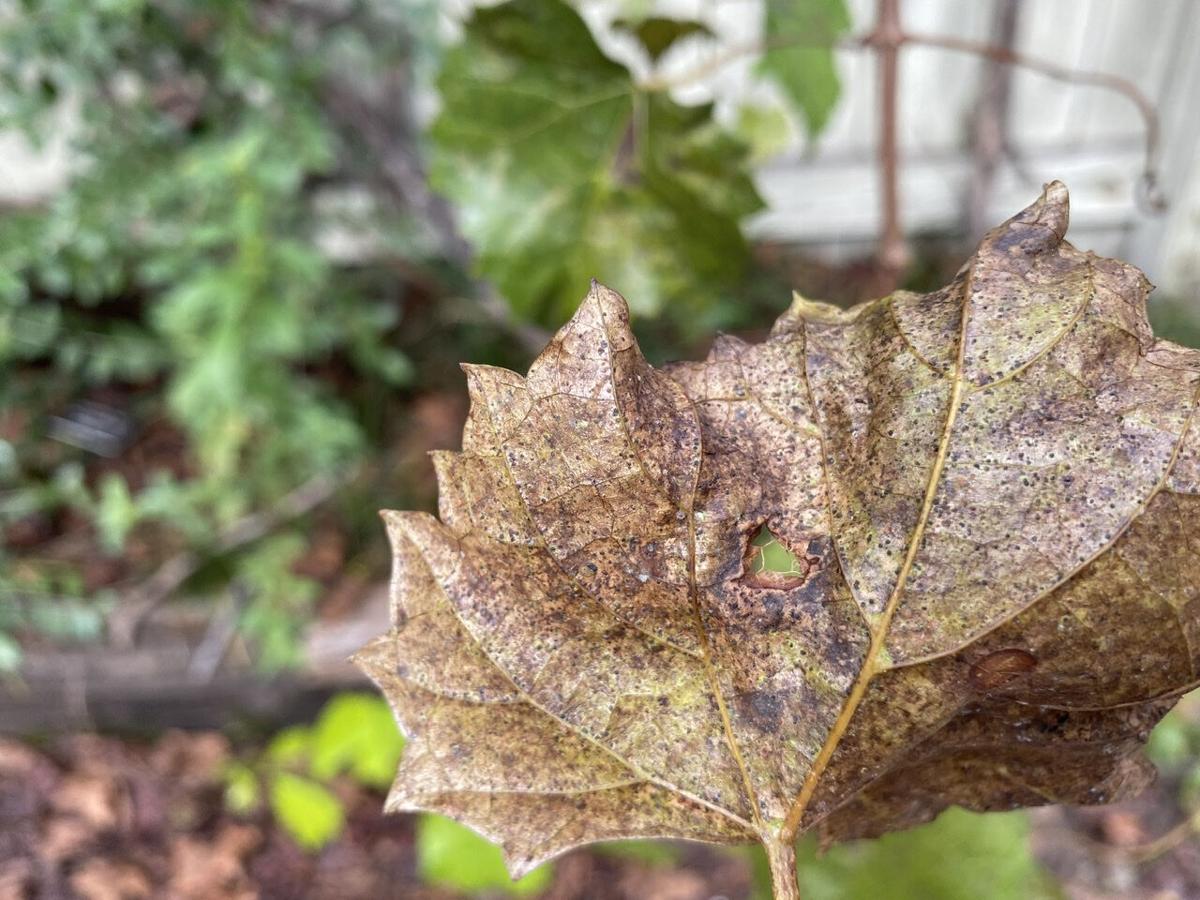 Identifying plant pest problems is detective work. You need information like the name of the host, the symptoms and location.

Our host plant was grapevine. It has a lot of problems this time of year. Late summer is when insects are big and hungry. One issue was white bubbly blobs drooling from the branches. It looked like someone spit on it.

Poking through the “spit,” we found small soft-bodied insects. The name of the insect is spot on: spittlebugs. They produce the exudate for protection. You might find them on rosemary or cosmos plants, too.

The second problem wasn’t hard to solve. Several leaves had wandering tracks like an insect was tunneling through it. These are leafminers. The larvae are small enough to feed inside the leaf. They can distort growth but rarely present a problem. You’ll see them on citrus trees, as well.

A third problem was more challenging. The leaves were bronzy. The bottoms of the foliage were covered in little black dots referred to as tar spots. This is bug poop.

Gardening: Beyond daffodils — dome spring bulbs work better than others

A common sampling method for tiny insects is branch beating. By banging a branch over a sheet of paper, we dislodged tiny narrow insects. The adults were winged and black. The nymphs, or juveniles, were clear with a red strip. These were thrips.

Thrips are common in greenhouses. We can monitor their presence with yellow sticky cards where the adults are attracted to the color. In the landscape, they can cause problems on flowers and shrubs. Typically, they’re nothing we have to control in the landscape. Beneficials eventually help us out. In our case, the grapevine is ornamental. The problem wasn’t bad, and the plant will shed its leaves soon anyway.

There was a fourth issue. Our only clue was feeding damage. Insect pests, for the most part, have either chewing or piercing-sucking mouthparts. Piercing-sucking feeding results in stippling symptoms. If the insect population is high, the foliage begins to look bleached.

Chewing damage is obvious. In some cases, such as caterpillars and beetles, the insect will consume all the foliage between the veins. If you’re lucky, the insect will still be feeding. But often, as in our case, insects hide during the day.

Not only does this make identification more difficult, it also limits control options. For instance, horticultural oil and insecticidal soap, two of the safest options, would have to be applied directly on the insect. If we can’t do that, residual products would have to be used. If it’s caterpillars, Bacillus thuringiensis, or Bt, would be a safe option.

Gardening: Pay attention to trees planted in your yard

In our case, the damage was minor, but identification was limited to symptoms. Luckily, they were unique. The damage was notched at the margins of the foliage. It almost looked like a paper punch. Weevils consume foliage in this fashion. These are snout beetles with chewing mouthparts on a long rostrum. That was my best guess to begin the investigation.

However, horticulture student Joshua Dubick had witnessed these exact symptoms on a redbud at his house. Upon further investigation, he was right. This wasn’t a weevil. This was a bee using the foliage to build a nest. She carries each piece to a narrow hole found in a rotting log or other parts of nature. She lays an egg and deposits food before capping the chamber with leaf fragments. She’ll do this several times.

Gardening: The joys of gardening in the fall

Like most native bees, she’s solitary. She doesn’t have a colony. She’s also a prolific pollinator, collecting nectar and pollen to leave for her newborns. She certainly isn’t an insect we want to control.

In fact, we’ve built native bee boxes for her and other bees like her by stacking hollow tubes of bamboo in a frame for them to build their nests. The investigation was solved. The circular notches were caused by a leafcutter bee.

We hope she comes back.