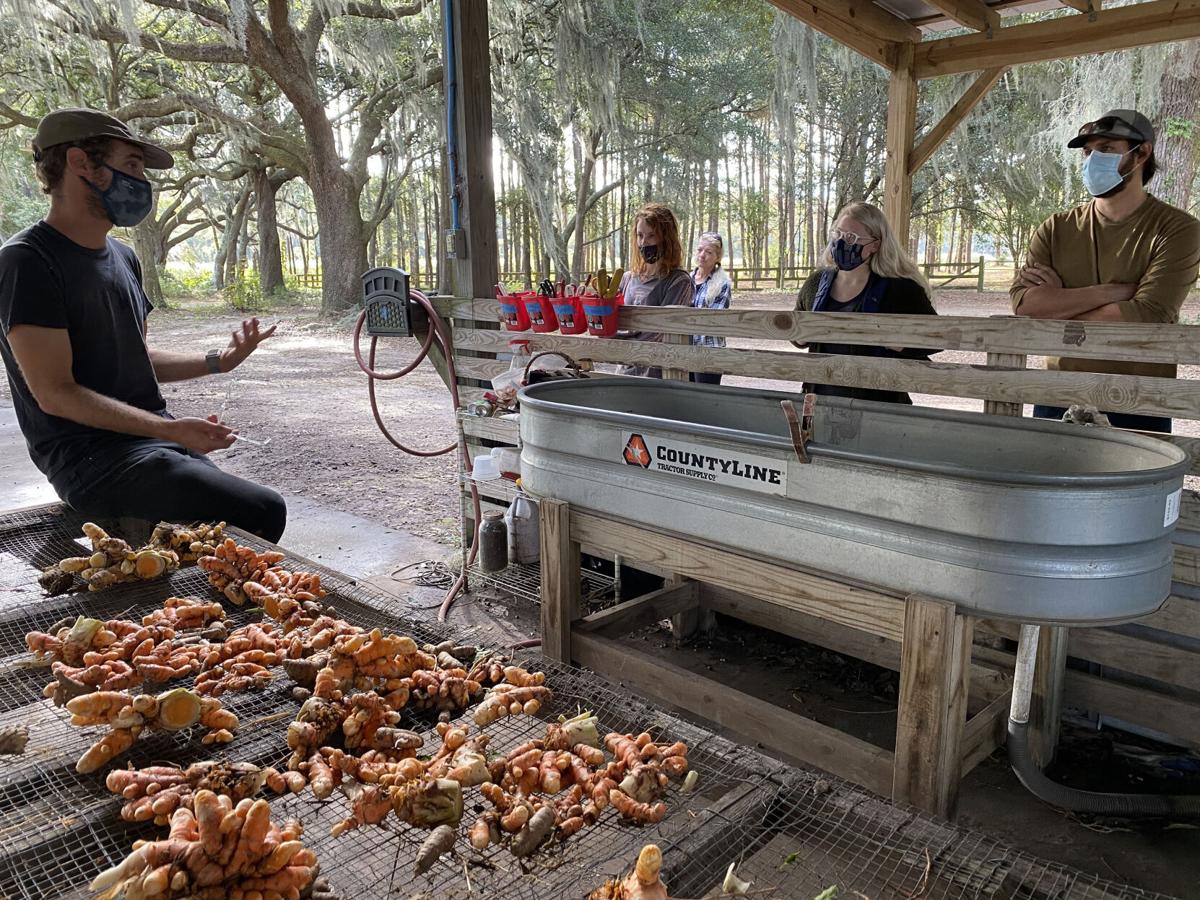 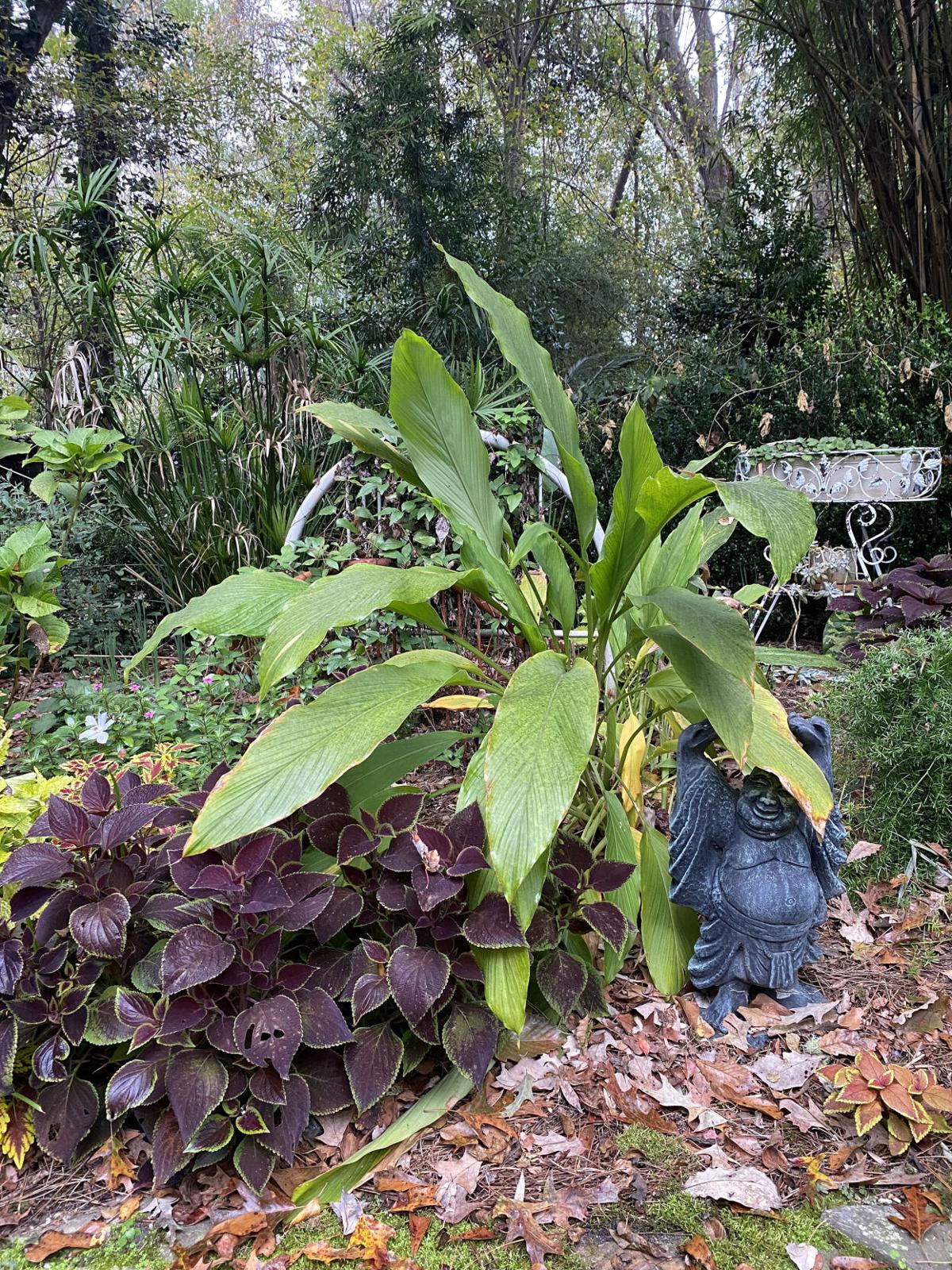 Turmeric, a plant with large green leaves, can be grown in Lowcountry gardens. Tony Bertauski/Provided

Trident Technical College horticulture students recently visited Spade and Clover Gardens on John’s Island. John Warren, owner and operator, had just harvested turmeric. I’m quite familiar with the plant. It’s growing in my backyard. You might want to consider it.

Turmeric is pronounced TUR-mer-ik, although many people, like me, say TOOM-er-ik.

It’s related to ginger. As an ornamental, it gets about 4 feet tall and 3 feet wide in a bunch-type growth habit and makes an interesting upright form with oblong foliage.

In Summerville, I’ve found it emerges from the ground rather late, but that’s not why I’m growing it for the ornamental appeal. That’s just a bonus. I want the roots.

Turmeric is a superfood. It contains curcumin, the ingredient that gives turmeric a bright orange color. Curcumin is a powerful antioxidant and anti-inflammatory.

Gardening: To get that 'fall feel,' plant perennials that bloom in November

I find turmeric to be a strong ingredient, at least how I use it. However, I want the health benefits. If you don’t like the flavor, curcumin supplements in pill form are available. And, since turmeric contains only about 5 percent curcumin, you’ll get more curcumin with a supplement.

It’s important to note that curcumin is poorly absorbed into the bloodstream because it is rapidly metabolized by the liver. By adding black pepper, which contains the active ingredient piperine, it dramatically increases absorption. According to one study, it can increase absorption in humans by as much as 2,000 percent. Curcumin supplements often include piperine for this reason.

Where you get turmeric is also important. Stanford researchers had reported that some spice processors use lead chromate to improve the color of their product. It goes without saying, lead is not what we want in our diet. Buying turmeric from local growers or harvesting in your backyard will ensure the quality of your product.

Turmeric will grow in the Lowcountry as a perennial. All you need to do is acquire a root from a local grower, such as Spade and Clover Gardens, at the Farmer’s Market. If you’re unable to do that, order online from seed suppliers. Technically, it’s not a root you’ll be planting but a rhizome. A rhizome is a horizontal stem. On turmeric, it looks like a tuber.

Gardening: All about growing strawberries in Lowcountry

The turmeric plant grows from a corm, which is similar to a bulb with some botanical differences. The rhizomes grow below ground in a display of knobby fingers. You can purchase a corm or a rhizome to plant.

Locate a spot in full sun to partial shade in the afternoon. The soil should be well drained and sufficiently composted. Turmeric has very few insect and disease problems, but poorly drained soil will lead to root rot. A happy plant will get about 4 feet tall so have adequate space.

Plant rhizomes about three to four inches below the soil. While some sources suggest doing this in May, I planted in November/December with success the following year. Just remember where you put them. In Summerville, the first leaves emerged from the ground in June and, since spring fever is well under way by then, it’s easy to forget where you planted them.

Rhizomes can be harvested in October or later by digging up the plant and breaking off the rhizomes, which look like orange fingers. Fresh rhizomes can be frozen for several months. They can be grated or thrown into a smoothie. To extend the shelf life up to three or four years, rhizomes can be peeled and dehydrated then ground into powder. One inch of a rhizome is equivalent to one freshly grated tablespoon. This is also equivalent to about one teaspoon of dry ground turmeric.

Be warned: turmeric will stain your fingers and clothes.

In my experience, turmeric is an easy plant to grow with medicinal benefits in your backyard.