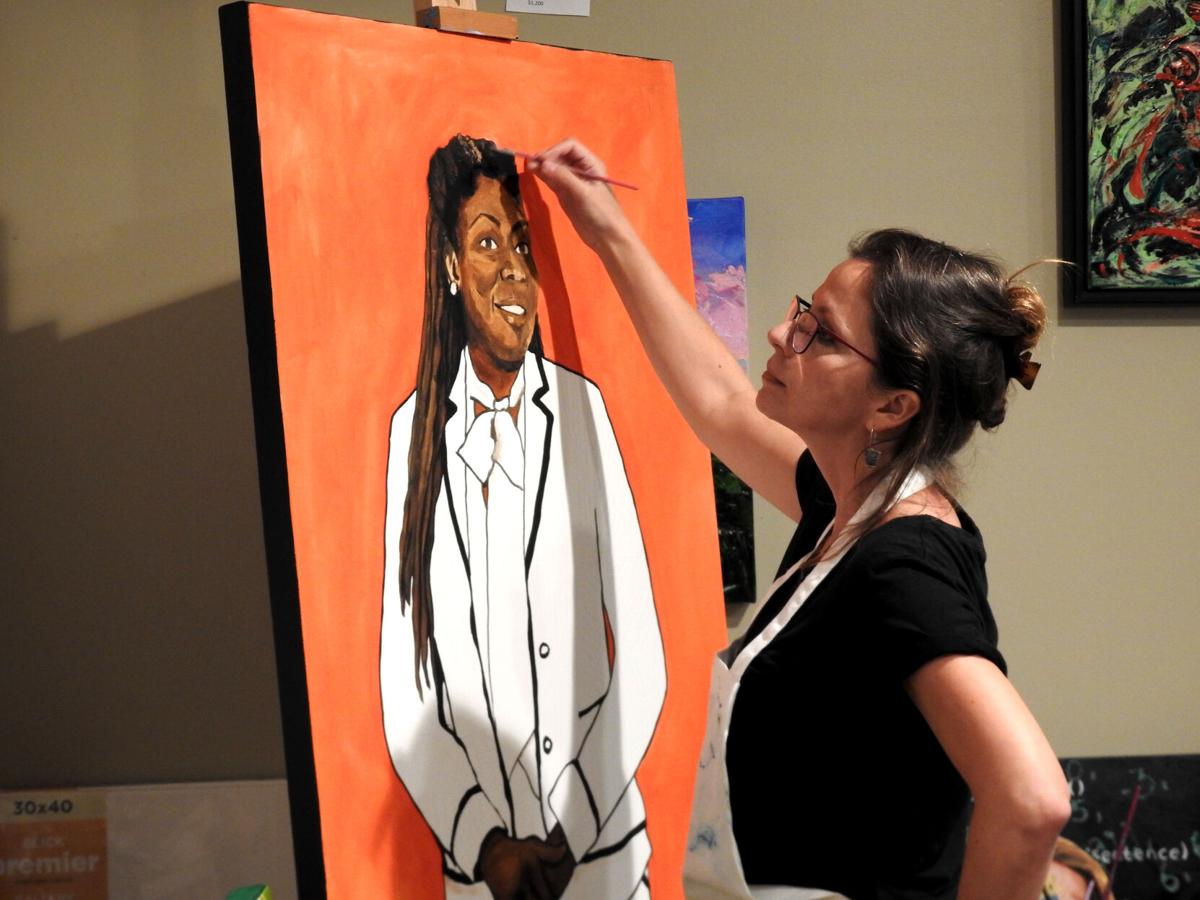 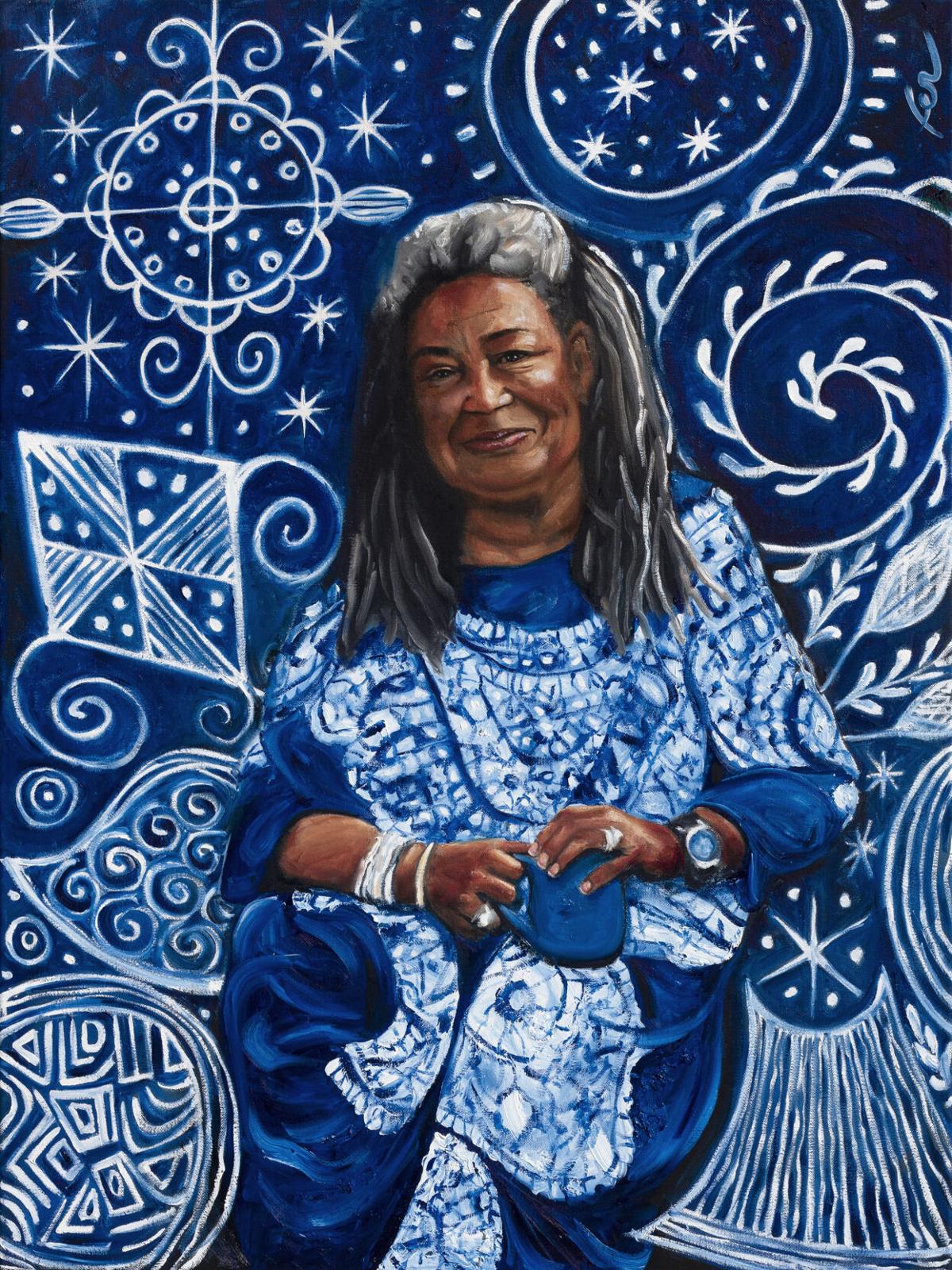 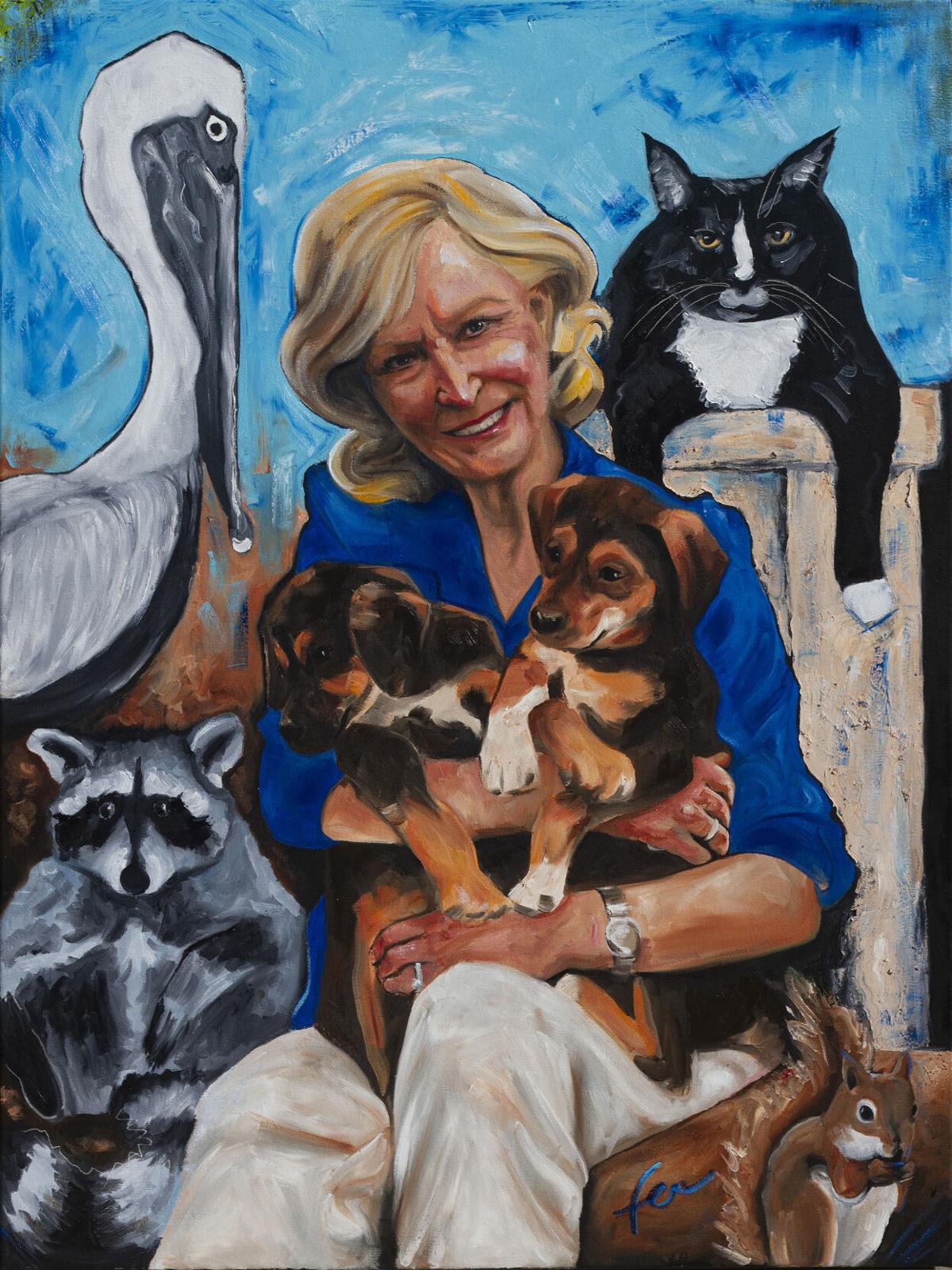 Carol Linville, founder and president of Pet Helpers Rescue and Adoption Shelter, is among the women featured in "Like A Girl: Dare to Dream" at City Gallery starting March 11. City Gallery/Provided 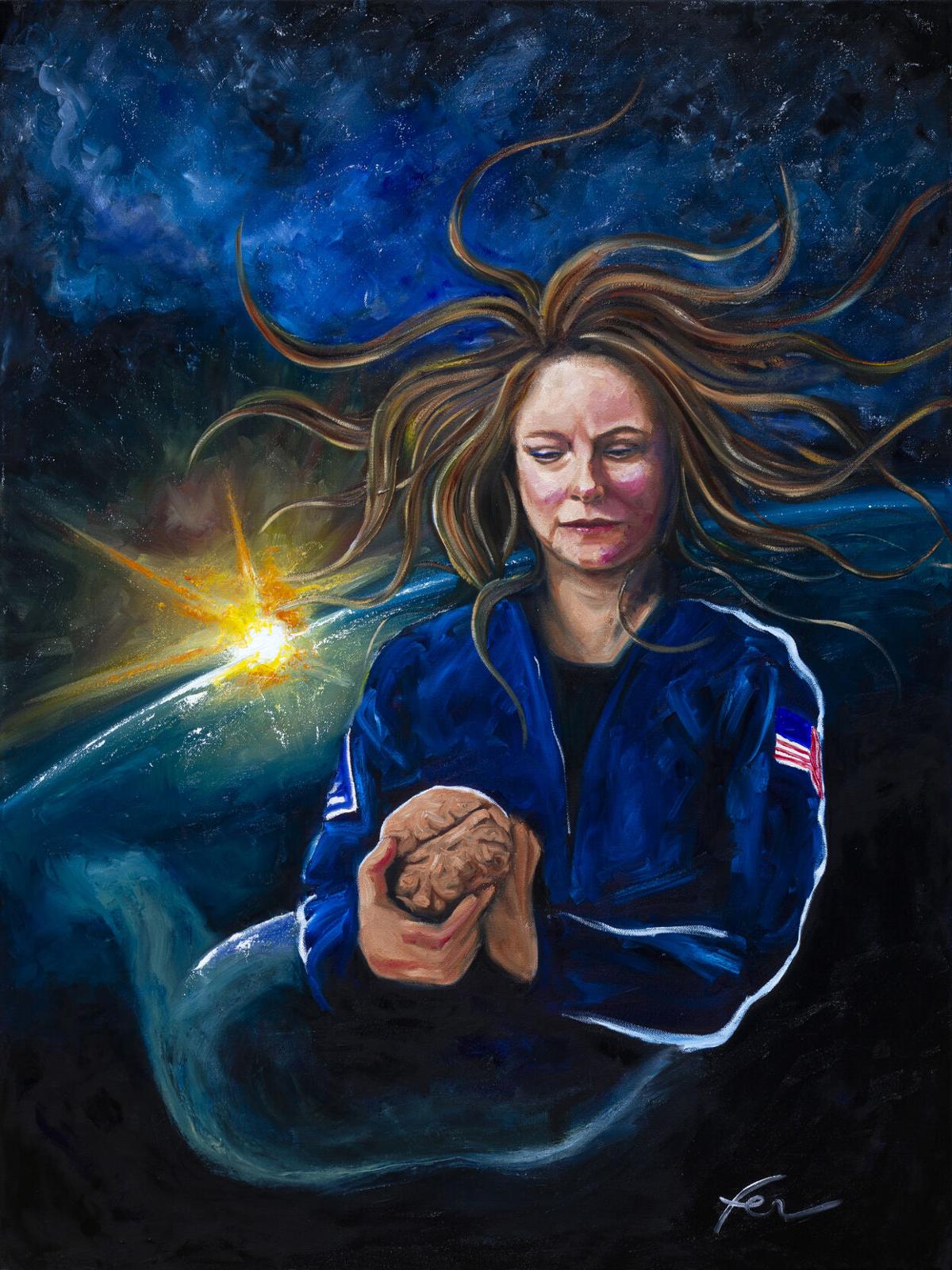 Donna Roberts, a neuroradiologist who works in space and aeronautics, is among the women in "Like A Girl: Dare to Dream" at City Gallery starting March 11. City Gallery/Provided 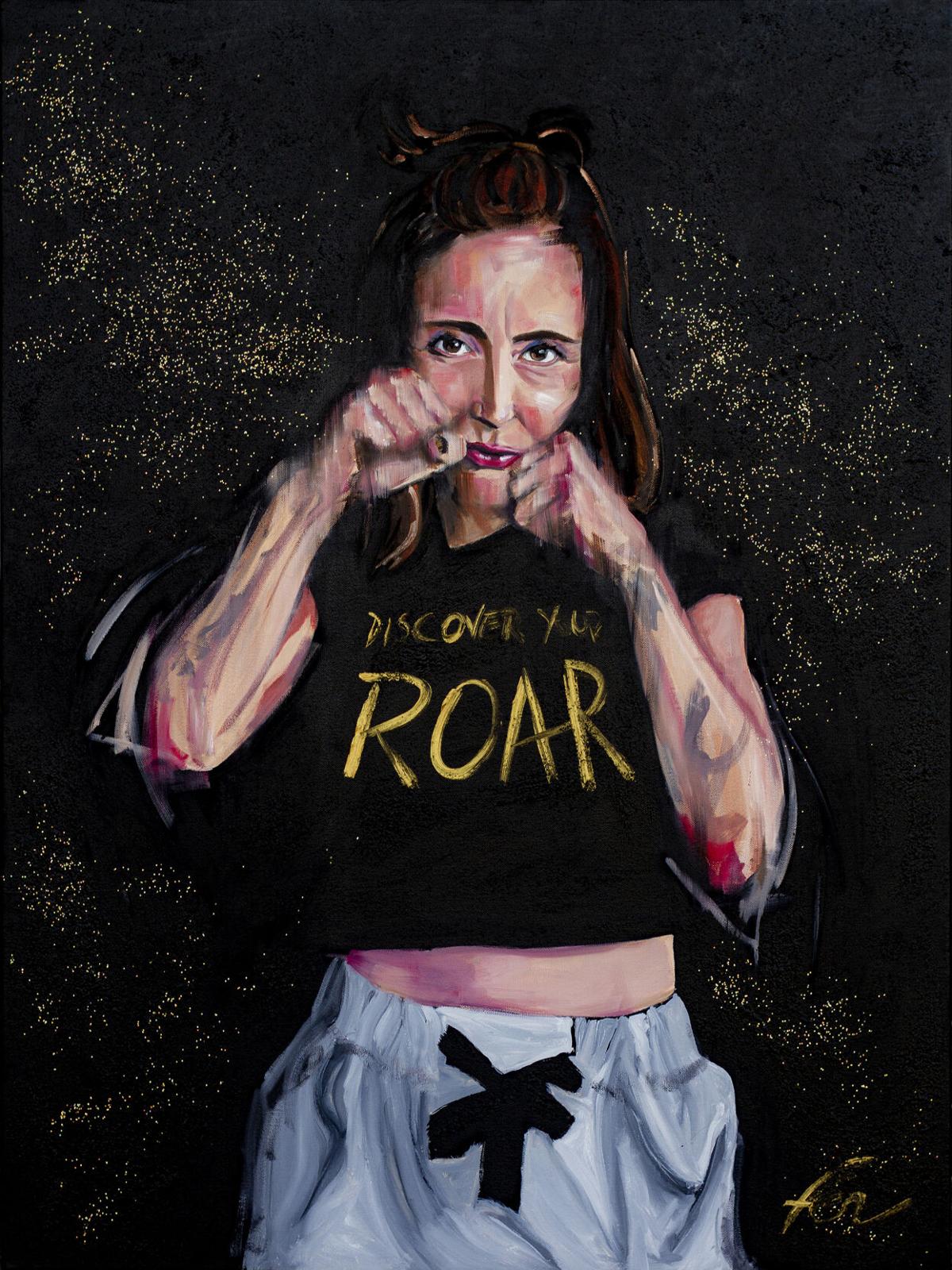 Fitness specialist Erin Mansour is among the women in "Like A Girl: Dare to Dream" at City Gallery starting March 11. City Gallery/Provided 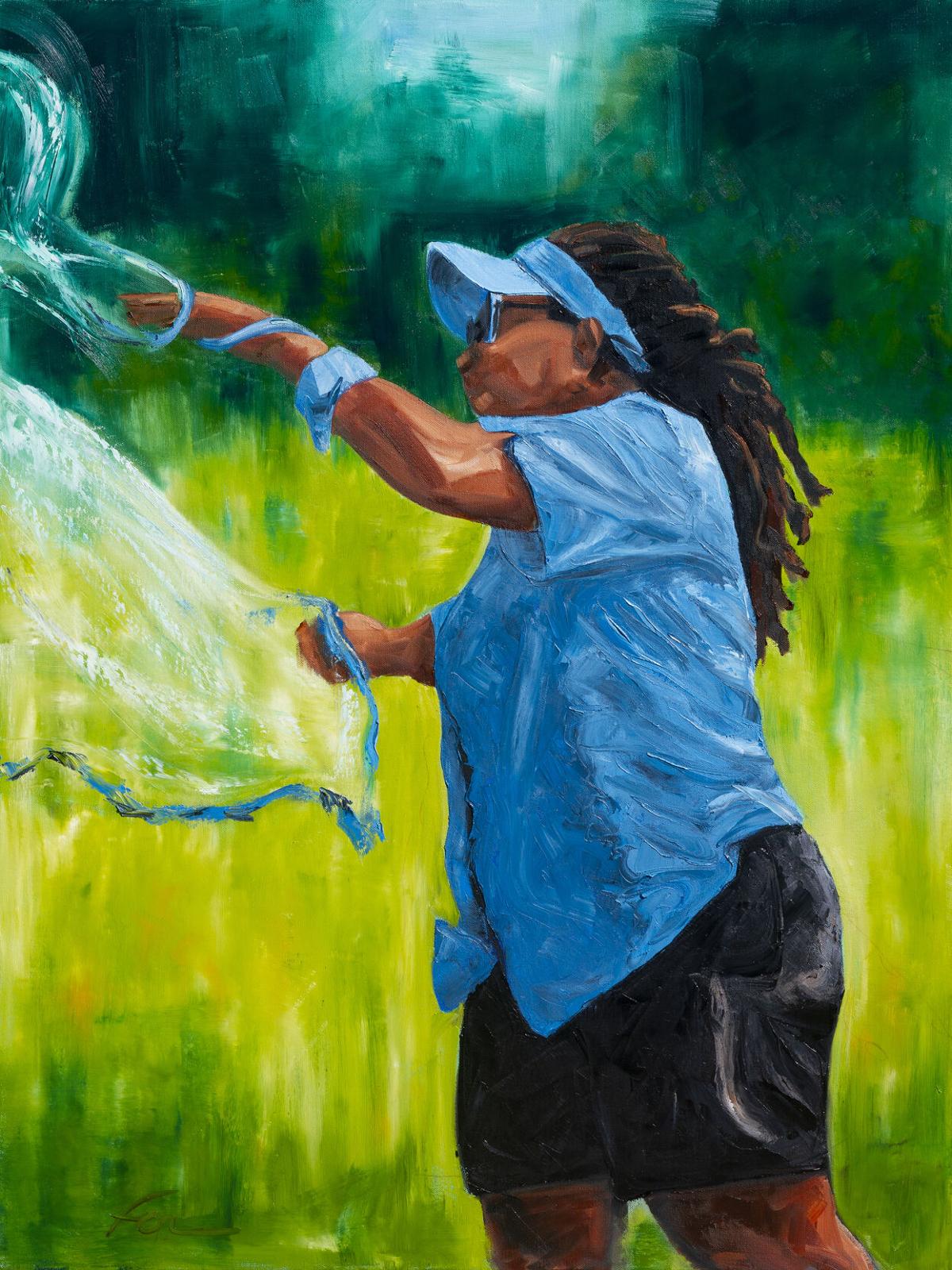 Tia Clark, who teaches crabbing, is among the subjects portrayed by artist Fer Caggiano. City Gallery/Provided

For the past two years, artist Fer Caggiano has been elbows deep in some heavy-hitting and highly impressive ways to make a living.

Applying brush to canvas for her dynamic, impasto oil paintings, the artist has captured more than three dozen subjects plying their trades, from a firefighter to a fitness guru, from a helicopter pilot to a talking head.

While their pursuits wildly diverge, Caggiano’s subjects do share one common attribute. They are all women — and South Carolina women at that. What's more, each dared to dream, striking out against odds to create lives and livelihoods, forging paths that weren’t always paved, navigating naysayers and bucking presumptions.

While some found themselves to be the only woman in the room, they now all come together at City Gallery for Caggiano’s new solo exhibition. “Like A Girl: Dare to Dream” opens there on March 11 and runs through May 2.

Heads up as the Lowcountry Lowline prepares to gain crucial ground

Featuring portraits of 40 South Carolina women, Caggiano's show brings attention to women who have excelled, sharing their stories so that girls and other women can envision their own potential.

"I decided that I wanted to paint inspiring and strong women,” said Caggiano, who felt doing so would help promote positive role models. “Especially in this region, I think we have a lot to work towards equality.”

The project will help support women in ways beyond the canvas, too. The works will be auctioned off virtually, with proceeds donated to organizations that support women and girls in reaching their maximum potential.

The idea first formed when Caggiano was part owner of a Charleston gallery. At the time, she was interested in painting nudes and was discouraged from doing so, told they would be off-putting to customers.

That prompted her own reckoning as she reacted to being told what she could or could not do and questioned what role being a woman had played in such a dictate. From that experience, a project sprung two years ago.

And while the artist may have been at one time drawn to nudes, she noted that, historically, women have more often than not been portrayed that way in paintings, more so than men.

"We usually make museums by being nude in a canvas," she said.

She references one striking case in point: Edouard Manet’s “Le Dejeuner sur l’herbe,” or “The Luncheon on the Grass,” which features fully dressed men enjoying a picnic with two females, one nude and the other nearly so.

Caggiano instead aimed to showcase a wide variety of accomplished women adorned with the stuff of their vocations — the flags, the insignia, the brawn and, quite literally, the brains.

Troubled by observing girls and women struggle to be respected in a male-dominated world, Caggiano set out to celebrate the achievements of local women who have broken gender barriers and smashed glass ceilings.

There is firefighter Ann Graham, who, according to Caggiano, has taken her fair share of heat in the firehouse throughout her career.

There is Arianne King Comer, a textile artist who specializes in the ancient technique of batik and is an indigo advocate. The artist portrays her awash in brilliant shades of blue.

There is Tia Clark, an expert crabber who has transformed that skill into a thriving Airbnb educational experience. In her portrait, she is captured grandly casting her net.

There is Donna Roberts, a neuroradiologist with a focus on aeronautics and space. Caggiano places her high above Earth, with hair defying gravity and hands clasping a brain.

And while many of her subjects may have broken new ground as women, Caggiano said that does not mean they have forsaken “girlish” inclinations.

She seeks to remove negative connotations associated with acting “like a girl,” underscoring that being successful and being feminine are not mutually exclusive.

“Girls and women must dare to dream — to be leaders, to be strong in mind, body and spirit — so that ‘like a girl’ will instead mean powerful and highly effective,” she said.

When it comes to a fraught country, arts money changes everything

She cites one of her subjects, Vicky Johnson, a military veteran who she said has perfectly styled hair and a fondness for pearls. Johnson told the artist she would braid her hair and put on makeup each morning before going into combat.

“Why does she have to shave her head? She doesn't need to do that. She can still be a very girly girl and be a fighter,” Caggiano said.

To capture that feminine spirit for the portrait, she painted Johnson in pink camouflage.

“Why can't we wear combat boots and love … pearls and pink? Who's making all those rules?”

She said other subjects, like construction professional Janet Bates, embrace qualities often associated with women, such as being detail oriented, applying them to a traditionally male field.

“She has had to put up with so much harassment and lack of respect. But she said there's so much room for women in construction,” Caggiano said.

The artist hopes the exhibition will foster a dialogue about gender and achievement. She aims to raise questions of whether females can really be anything they want to be, what obstacles they encounter that men and boys do not, and how to ensure that future generations of women can become leaders in any industry or field.

Caggiano plans to be on site at the gallery as much as possible, given the constraints of the pandemic. She will paint the exhibition's final portraits on premise at City Gallery on March 11, 18 and 25.

At the culmination of the show, when all the portraits are complete, a book will be published, which will feature the works along with the stories of each subject. After the exhibition the paintings will be sold in a virtual auction. Proceeds will benefit Girls on the Run Coastal Carolina; Women in Aviation, Palmetto Pride Chapter; and YWCA Greater Charleston.

The hope is to help girls and women envision their own aspirations, without the obstacles many of her subjects have encountered.

"It shouldn’t be tough," she said. "I have to use my art as a voice to promote change."

Due to the ongoing pandemic in South Carolina, City Gallery guests must reserve a time slot in advance online or by phone for free, timed admission, with exhibition viewing offered Thursdays through Sundays from noon-5 p.m. For more information, go to citygalleryatwaterfrontpark.com.