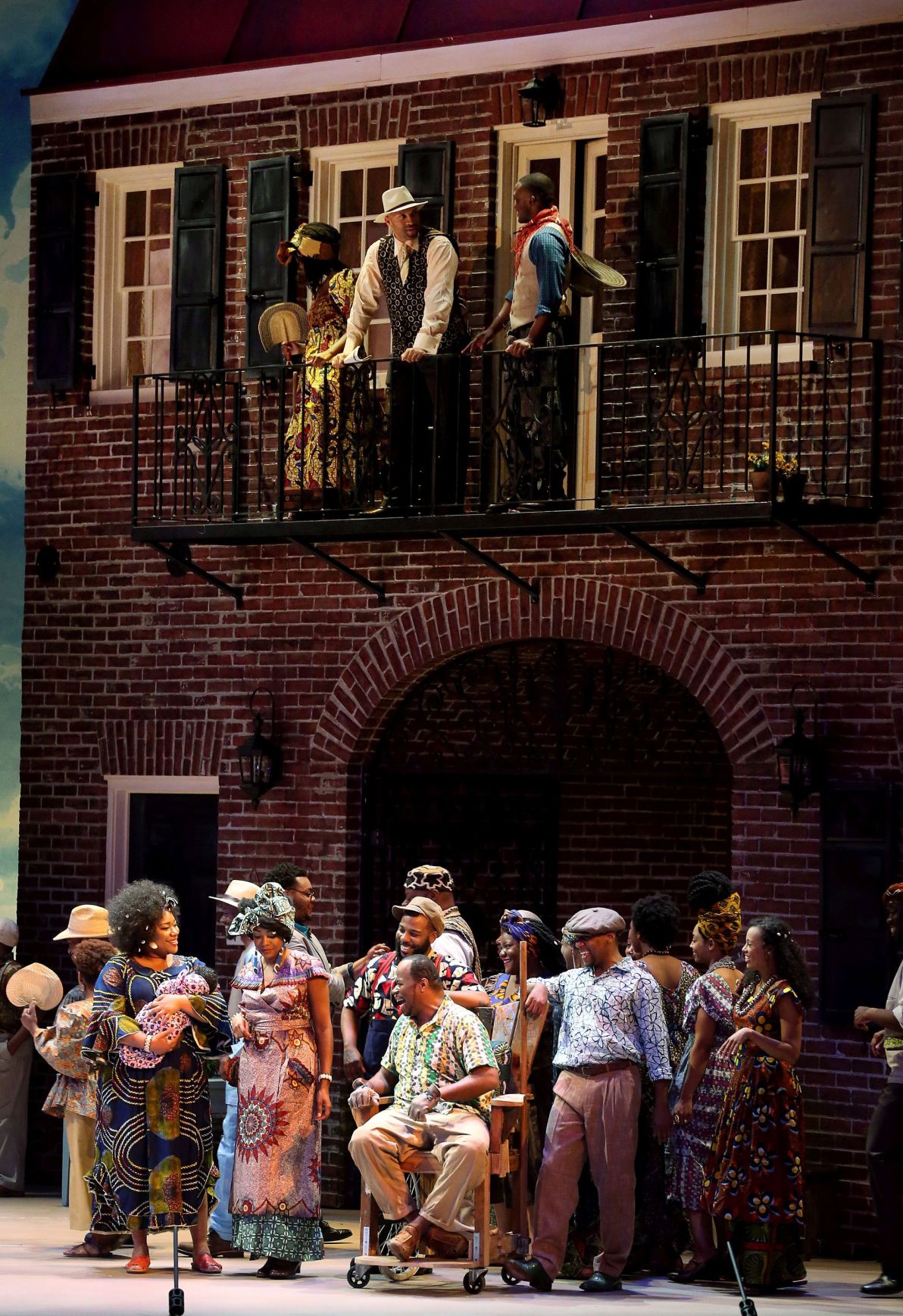 Spoleto Festival’s 2016 production of “Porgy and Bess,” performed at the Gaillard Center, which includes Gershwin's composition of a Charleston hurricane. Provided 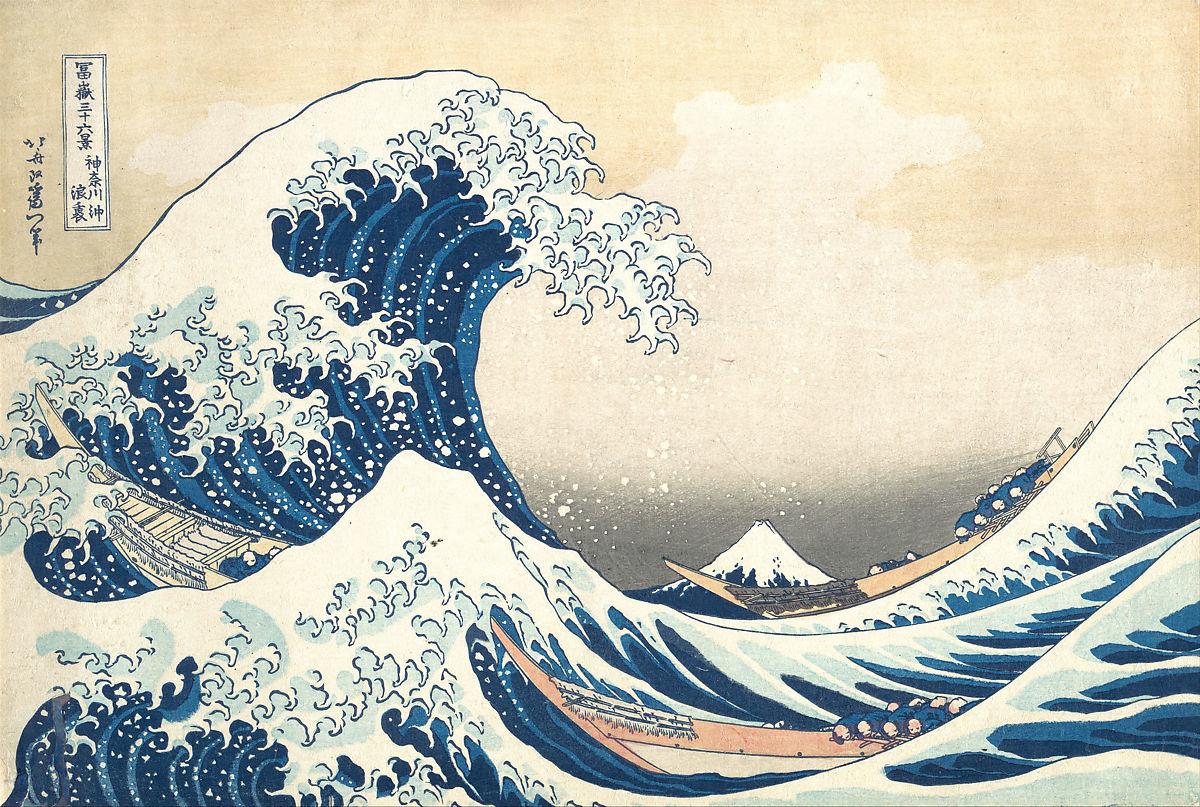 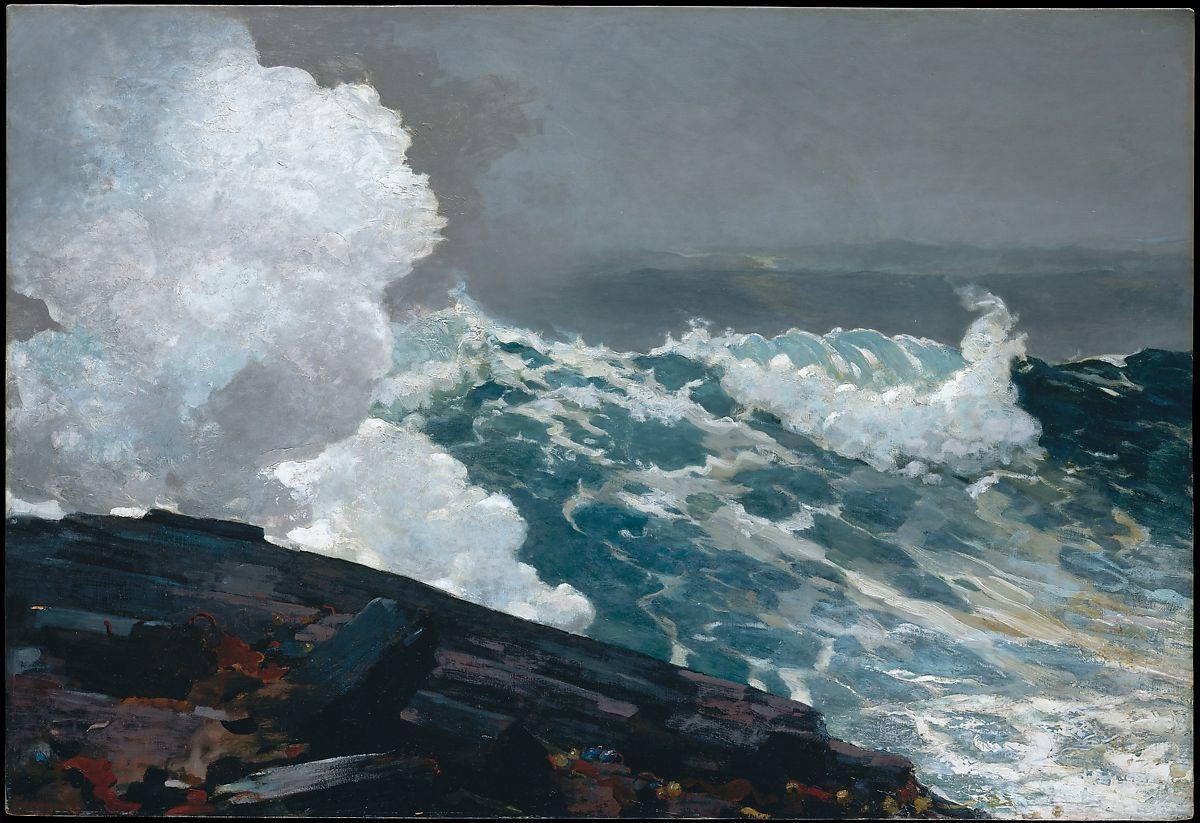 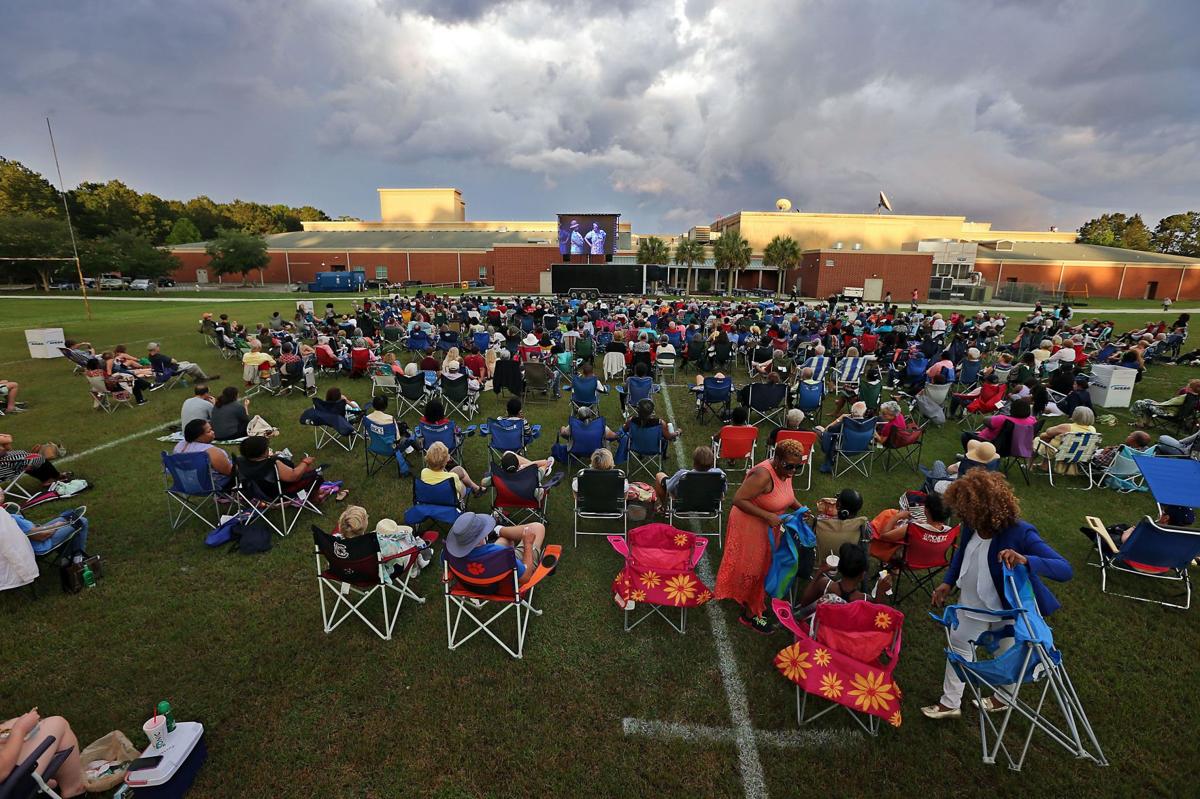 Spoleto Festival USA and Charleston's Office of Cultural Affairs broadcast the Festival's production of "Porgy and Bess" to an audience gathered in the practice field at West Ashley High School. Rain started about 30 minutes into the Jumbotron broadcast, sending many streaming back out through the gate to their cars. File/Staff 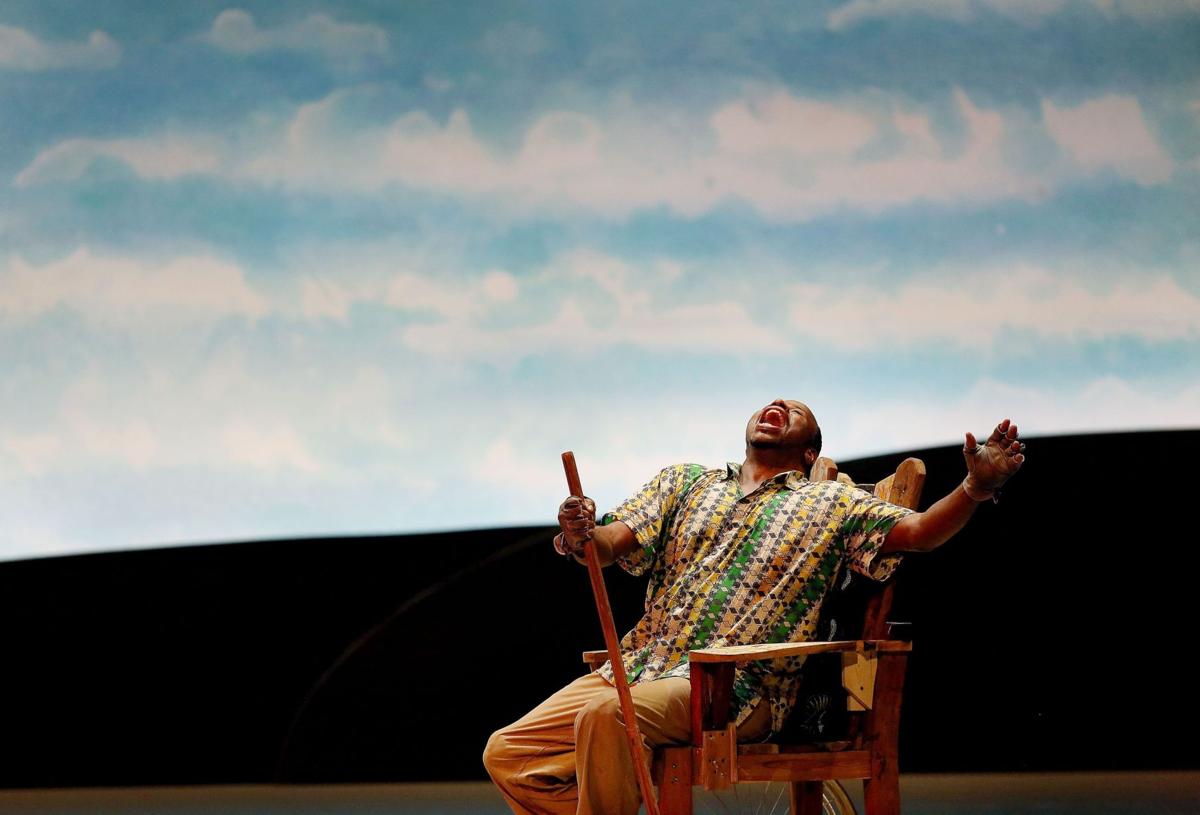 “Porgy and Bess” benefited from a visual design by Jonathan Green, finely rendered costumes by Annie Simon and a gorgeous set by Carolyn Mraz. File

Spoleto Festival USA and Charleston's Office of Cultural Affairs broadcast the Festival's production of "Porgy and Bess" to an audience gathered in the practice field at West Ashley High School. Rain started about 30 minutes into the Jumbotron broadcast, sending many streaming back out through the gate to their cars. File/Staff

“Porgy and Bess” benefited from a visual design by Jonathan Green, finely rendered costumes by Annie Simon and a gorgeous set by Carolyn Mraz. File

Anyone who has spent but a year in Charleston knows well the consuming arc of a major storm.

First, there is that dread of detection hovering over distant waters.

Then there is that uneasy anticipation, as the convergence of elements organizes or scatters, strengthens or weakens, wobbles east then west.

If it rips our way, those who have chosen to stay put resort to a helpless hole-up, eyes fixed on windows or glaring screens.

And, when the force of nature finally quits our pummeled strip, the waters recede in the aftermath to reveal just what wreckage is going to want fixing.

These days, storms seem all the more wrathful. However, for centuries they have packed enough destructive charge to captivate our greatest writers, composers and painters, who fish out pens and brushes to harness all that mayhem into timeless works of art.

Here are some resonant selections from foul-weather masters to get you through the wildest nights.

We didn’t always have such high-tech modes of getting word on incoming chaos, but we did have ways if we chose to heed them.

It seems there were storm deniers back then, too, as Janie and fellow field workers saw little cause for concern in the calm: “Morning came without motion. The winds, to the tiniest, lisping baby breath had left the earth. Even before the sun gave light, dead day was creeping from bush to bush watching man.”

Composer George Gershwin lets loose a whopper of a Charleston hurricane in his 1935 “Porgy and Bess,” his opera based on the novel by Charleston author Dubose Heyward that came to the Gaillard Center as part of the 2016 Spoleto Festival USA.

The orchestral piece, “Catfish Row-Suite from Porgy and Bess: Hurricane,” eases us in with the languor of a sultry Charleston day. Then, the strings intensify, the brass blares and a hurricane bell ominously clangs, whipping up a frenzy as those on Catfish Row hold tight and ride out the storm.

Hurston, the novelist, has an ear on the chaos, too: “Everything in the world had a strong rattle, sharp and short like Stew Beef vibrating the drum head near the edge with his fingers. By morning Gabriel was playing the deep tones in the center of the drum … Louder and higher and lower and wider the sound and motion spread, mounting, sinking, darking.”

The Italian composer Gioachino Rossini also unleashes a torrent in his 1816 opera, “The Barber of Seville.” Starting tranquil and slow, string-and-woodwind raindrops plunk in, before breaking out the cacophony of full-measure brass, booming percussion and screeching strings. It then ends again with a pensive pitter-patter. The storm has passed.

“The Four Seasons,” Antonio Vivaldi's early 18th-century violin concerto, delivers a madly dashing summer storm with force and velocity. It's made all the more powerful by the lush summer sounds surrounding it.

No one quite captures the rage and romance of the sea like 19th-century American landscape painter Winslow Homer. In his 1895 oil-on-canvas  “Northeaster,” sea-green waves whorl and crash in riotous abandon on massive black-brow rocks, while an ominous gray sky augurs trouble to come.

And in that same century, Japanese artist Katsushika Hokusai reared his famous woodblock print of a blue wave over a dwarfed Mount Fuji in "The Great Wave off Kanagawa." Using scale, saturated blue and a nexus of motion and stasis, we are poised on the brink of disaster, threatened to be swept away by one magnificent, monstrous arch of sea.

Forget nosing around their medicine cabinet. Judge Charlestonians by their coffee table

William Shakespeare weighs in on how water can get on your last nerves, too. In the first scene of "The Tempest,” he gets things roiling with a violent sea storm, during which the character Gonzalo gains a new appreciation of dry land, something to which many a local would relate.

"Now would I give a thousand furlongs of sea for an/acre of barren ground, long heath, brown furze, any/thing. The wills above be done! but I would fain/ die a dry death." Maybe Charleston's recent, scorching summer that shriveled many a window box was not so unbearable after all.

Then there is the eerie quiet after the storm has passed, when we peek out of boarded homes to assess the storm's toll.

In Emily Dickinson's poem "A Thunderstorm," the famed shut-in captures in verse a storm from its start to finish, surveying the damage.

“There came one drop of giant rain/And then, as if the hands/That held the dams had parted hold/The waters wrecked the sky/But overlooked my father's house/Just quartering a tree.”

From those initial little trickles to its ultimate savage onslaught, a serious storm evokes a dizzying churn of fear, grief, relief and gratitude. And, aided with a few choice words or strokes or notes, it also affords us with a greater understanding of our precarious cat-and-mouse game with Mother Nature.

It's no wonder artists time and again yearn for mastery over a storm. It is, after all, the very thing that cannot be mastered.