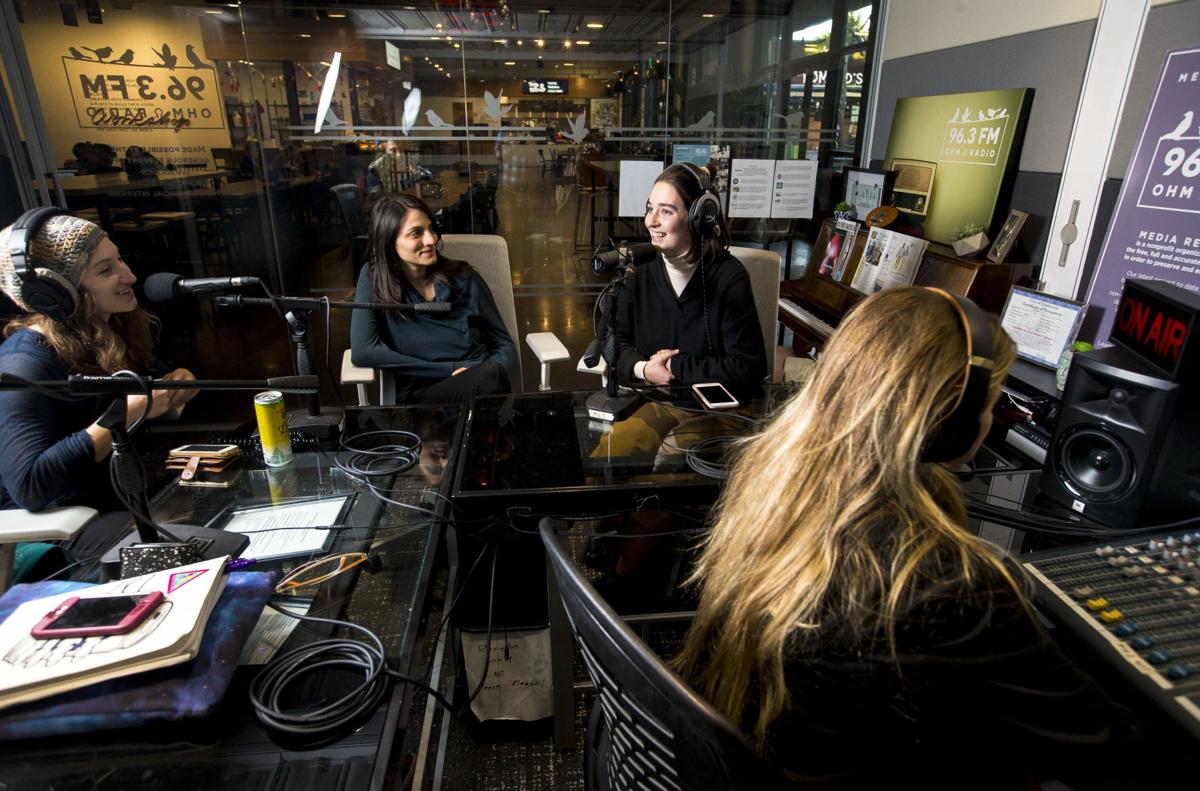 From left, Taylor Czerwinski, Vikki Matsis, Jamie Gray and on the board Jenna Feeney during the live broadcast of "9-5 Magazine Live" show at the Ohm Radio station booth inside Charleston's Workshop on Tuesday, Jan. 28, 2020. Andrew J. Whitaker/Staff 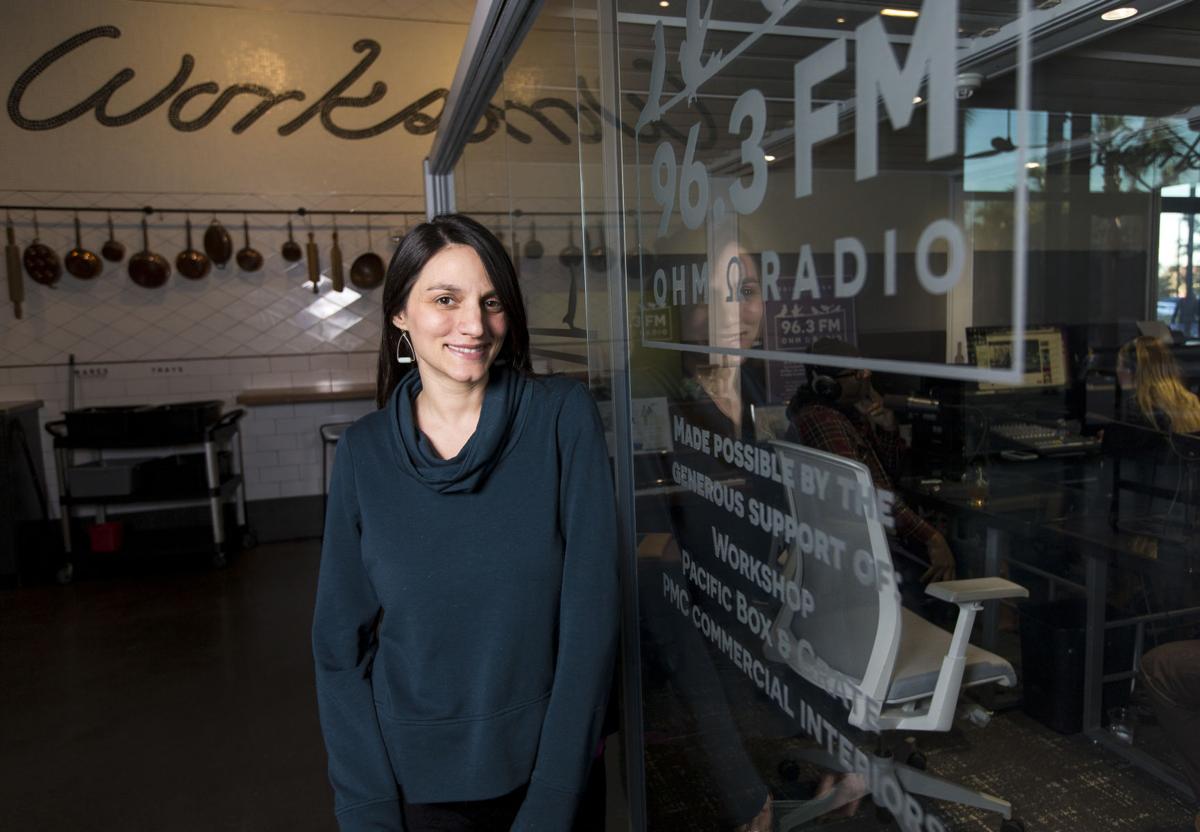 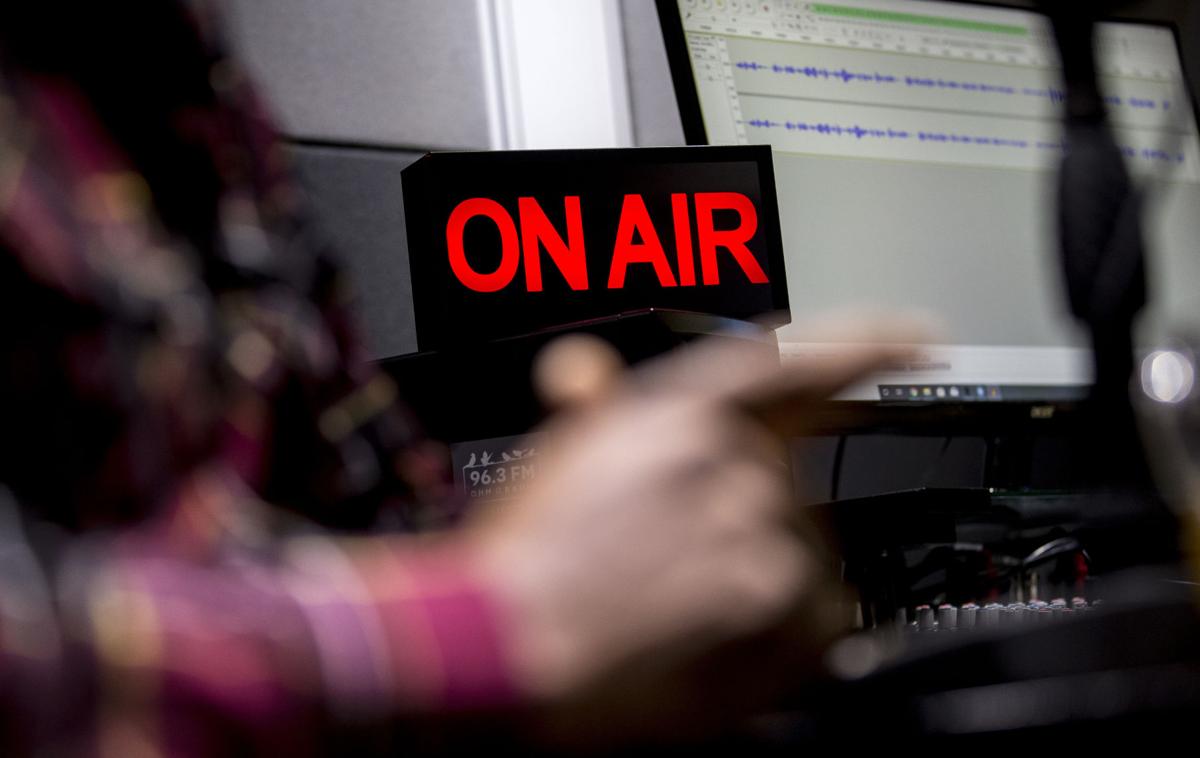 The "On Air" sign during the show "Your Wealth in Wellness" at the Ohm Radio station booth inside Charleston's Workshop on Tuesday, Jan. 28, 2020. Andrew J. Whitaker/Staff 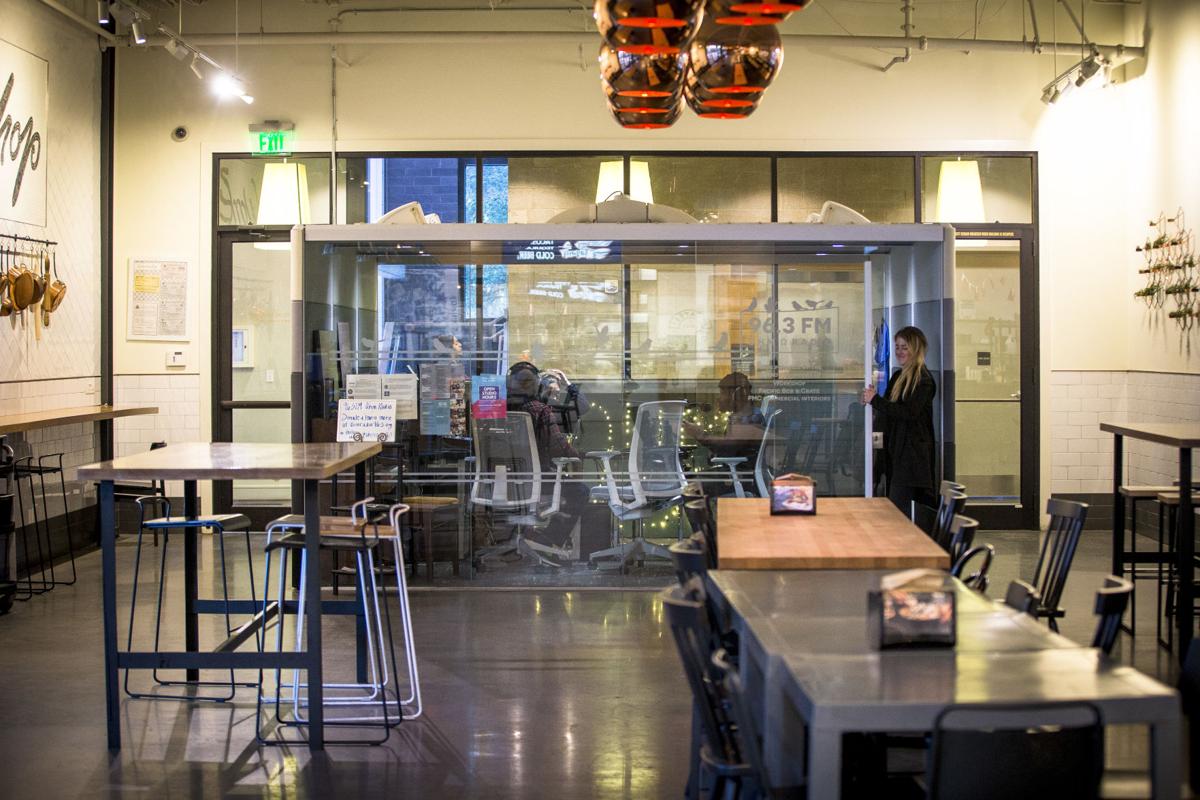 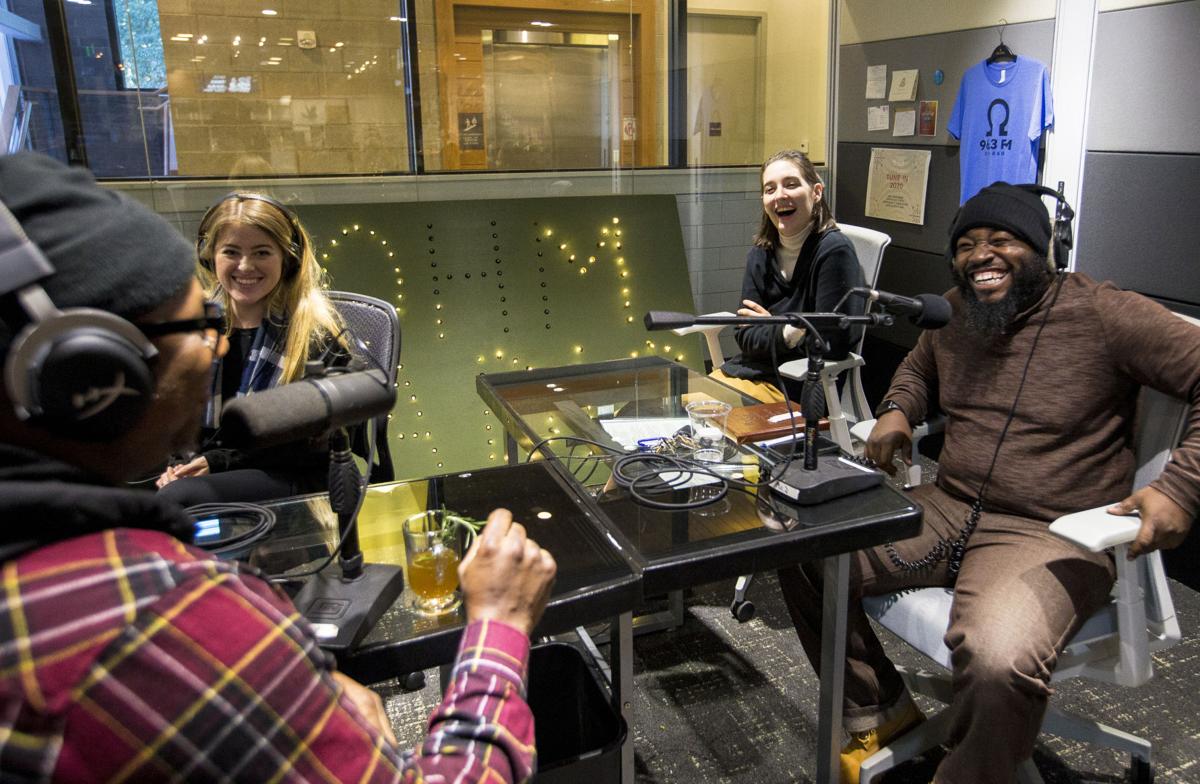 From left, Taylor Czerwinski, Vikki Matsis, Jamie Gray and on the board Jenna Feeney during the live broadcast of "9-5 Magazine Live" show at the Ohm Radio station booth inside Charleston's Workshop on Tuesday, Jan. 28, 2020. Andrew J. Whitaker/Staff

Anyone who has ever ventured into the sleek Workshop food court in search of a burrito or a tuna roll may have noticed a curious set-up at the east end of the hall.

Those hard-at-work pod people may have been sharing the latest from Charleston’s indie rock band Susto. They could have been airing interviews with mayoral candidates.

Whatever the undertaking, they were doing what Ohm Radio 96.3 FM always does. They were aiming to change the way the Charleston community shares their voice, one song or notion or show at a time.

Such is the mission of the city's first local, commercial-free FM radio station, which seeks to promote Charleston's arts and culture by giving every community member free access to information and a platform to share his or her own.

A mic with a mission

The origins of Ohm, which has recently rounded its five-year mark on the air, trace back to founder Vikki Matsis, a poised woman with long brown hair, who is at once drop-dead earnest and pleasingly mellow.

She dreamed up the idea with her mentor, former College of Charleston psychology professor Faye Steuer, after the two attended the National Conference of Media Reform

Those early days, according to Matsis, were "trial by fire." Today, she continues to guide the effort, but is quick to characterize the enterprise as a collective effort.

On a recent afternoon, I observed as she gently shepherded a College of Charleston intern through her broadcast. But for two relatively recent and hard-won staff members, Ohm is powered by volunteers who spread the word, raise the funds, host the shows and shape the strategy.

They are musicians and money men, professors and poets, artists and activists. A list of words on Ohm’s website — nonpartisan, nonsectarian, democratic, educational, egalitarian, truth-seeking and transparent — form the basis of their shared belief that everyone in Charleston should have a voice, and one that is never beholden to a quid pro quo and never predicated by a price tag.

State of the airwaves

At a January celebration of Ohm's five-year anniversary, Matsis spoke of the organization’s vitality, signaled by its steady growth in programming, resources and reach.

"We are a platform that amplifies all the cool things are are happening in Charleston," Matsis later said.

Today, Ohm’s robust roster offers enough original and syndicated shows to engage throughout the day. Its operating budget, while modest for a radio station, has increased significantly, allowing for the hiring of Jenna Feeney and James Frolio. Its 2018 move to the new studio at Workshop has further upped its visibility. A serendipitous shift of another station’s frequency resulted in Ohm now transmitting out as far as Johns Island.

The show must go on. The cell phone must not. Dos and don'ts for Charleston performances.

A recent grant from the Gaylord and Dorothy Donnelley Foundation promises additional financial stability, as well as a vote of confidence from a foundation with an eagle eye on an organization's contribution to the cultural health of the Lowcountry.

But for Matsis, such developments are immaterial.

"We're not competing with the other radio stations that are profit-based. We exist because the community wants us to."

While Ohm and WEZL may be neighbors, frequency wise, their end games diverge. Ohm has more to do with community empowerment than commercial profit.

"The airwaves are a public utility," said Matsis, explaining how litigation around that fact opened the LP FM window.

Getting with the program

Most mornings, Ohm listeners start the day with “Just Good Music,” Adam Chandler’s popular show. They then segue to others, such as Charleston poet laureate Marcus Amaker’s eclectic “Mix Tape with Marcus" or “Tributes,” with host Garrett Garnos's deep dive on a single artist or genre, like Bob Dylan, Nina Simone or soul.

Garnos, who also serves on Ohm’s board of directors, first connected with the station when he was the owner of Eclectic Cafe and Vinyl.

There is also airtime for any local artist who sends in an MP3, in segments that amiably skitter from alt rock to hip-hop, Latin pop to country. Other shows share live performances and interviews with homegrown talents, among them Susto, bluegrass phenom Dallas Baker and hip-hop artist Matt Monday.

There's more than music, too, such as shows on current affairs  like Amy Goodman's syndicated “Democracy Now" and “Mic’d Up,” hosted by Charleston activist Tamika “Mika” Gadsden. For “Your Wealth in Your Wellness,” hosts Marcus Stevenson and Lloyd Hale cover self-advocacy and recovery.

Review: Jazzed up or wired, in Charleston, happiness is a warm violin

The creative community gets play in the bi-weekly “Just Imagine,” with writer Stephanie Hunt and dance expert Eliza Ingle interviewing local artists and practitioners about their latest projects. In “Tales from the Manor,” Enough Pie connects local music, residents and memories, amassing enough stories to have compiled them in Ohm’s first book.

Hunt, who is also a board member, was drawn to Ohm by the access it affords a wide range of individuals.

“It offers a platform for people who have a passion, but not necessarily a professional role in broadcast,” she said.

Beyond the programming, Charleston’s musical orbit has informed Ohm from the get-go. That orbit includes Matsis, an acclaimed singer and songwriter, and her husband, Lee Barbour, a jazz composer and musician.

The music scene also figures into fundraising initiatives, from an annual February Singing Telegram fundraiser to tending bar at the Highwater Festival, with volunteers pocketing the tips for the station.

People who work in glass boxes

True to its mission, its glass box of a studio set smack in Workshop's Upper King Street space is nothing if not transparent. In 2018, Ohm relocated there from its first home in Joseph Floyd Manor, a senior housing complex on Mt. Pleasant Street in downtown Charleston.

“We love having them here,” said Workshop partner Michael Shemtov.

The innovative food court seeks to support entrepreneurial ventures that make a creative impact on the community and welcomes the variety Ohm offers. Shemtov credits the move to his partner Martin Skelly. A financial adviser on the Ohm board of directors, Skelly oversaw the arrangement, charging Ohm a dollar a year in rent and helped the station to procure their pod, which contains a desk, a large-scale computer and sound board, headphones, microphones and a piano.

There is not so much as a closet, let alone doors leading to any executive meeting room where palms can be greased and deals can be swung. The only outpost is Joseph Floyd Manor, where the rooftop tower and tucked-away transmitter remain.

Fishbowl aside, the real point of distinction is Ohm's model. The station is an offshoot of the grassroots nonprofit group called Media Reform SC, which was created by Steuer, and for which Matsis serves as president. To start Ohm, the two worked with Prometheus Radio, which provided both a grant and considerable hand-holding to set up the station.

With such a setup, Ohm is free to offer Charleston a wide range of content. Matsis explained the fallout of digitally driven content, which is algorithmically programmed to deliver content that is similar to what is being viewed. Media outlets, including radio and newspapers, she said, can reach audiences that might otherwise be relegated to such self-reflexive “filter bubbles."

Ohm also sidesteps the need to repeatedly feed the same content. The financial model on which most commercial radio stations operate tends to cull the playlist to a selection of songs based on frequency rates, since the more times a song is played, the less a station pays for each airing.

As a nonprofit, Ohm pays a flat usage fee spanning rights organizations like BMI or ASCAP.

Ohm's next phase involves greater access, making the programs available beyond their airtime and a car radio. To that end, most shows are now archived and available on Ohm’s website. Some are now available as podcasts. Listeners can also download an app by way of ohmradio963.org.

Whatever the point of access, volunteers like Garnos and Hunt will continue to enliven that little glass pod, spread the word and connect the Charleston community.

“I see so much room for growth as Ohm gets more community involvement,” said Garnos.

“I feel like there’s nothing but upside potential for where it can go,” said Hunt.