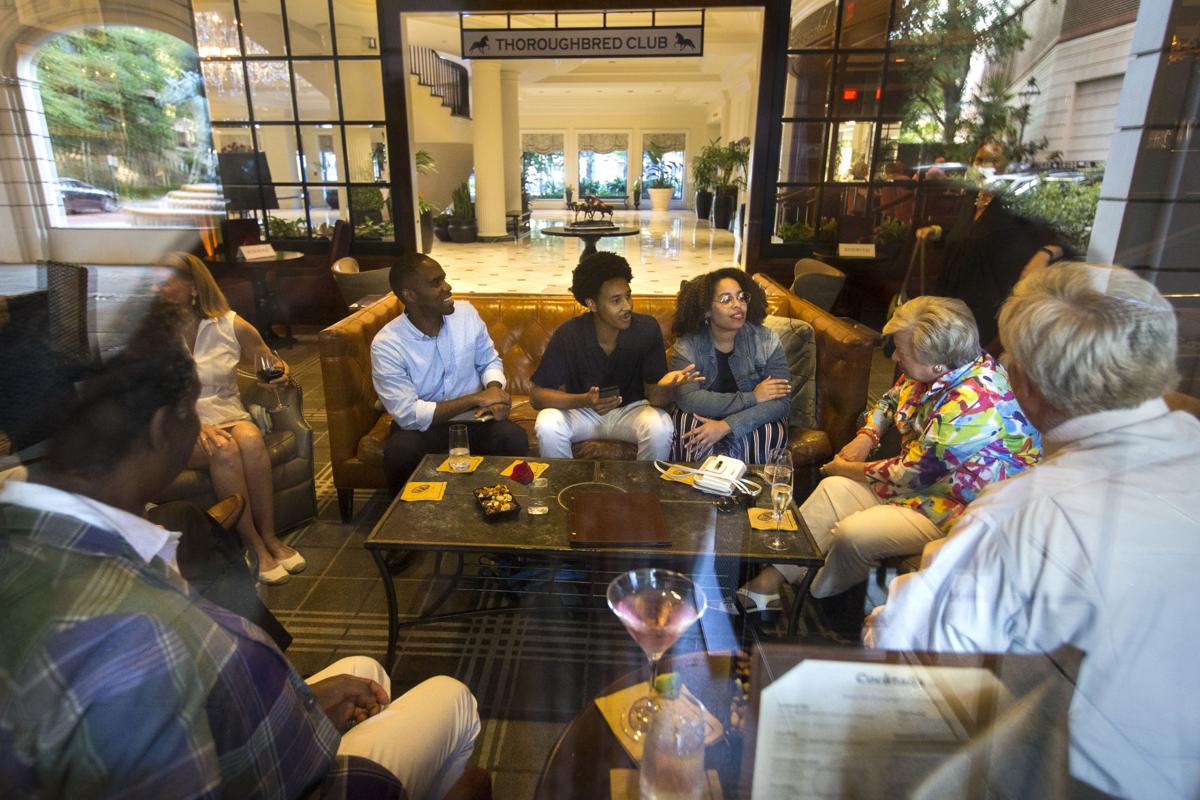 Every Monday night at the Thoroughbred Club residents of Charleston meet for cocktails and snacks including artist Jonathan Green, Judge Richard Gergel and others. Monday, Aug. 12, 2019 in Charleston. Andrew J. Whitaker/Staff 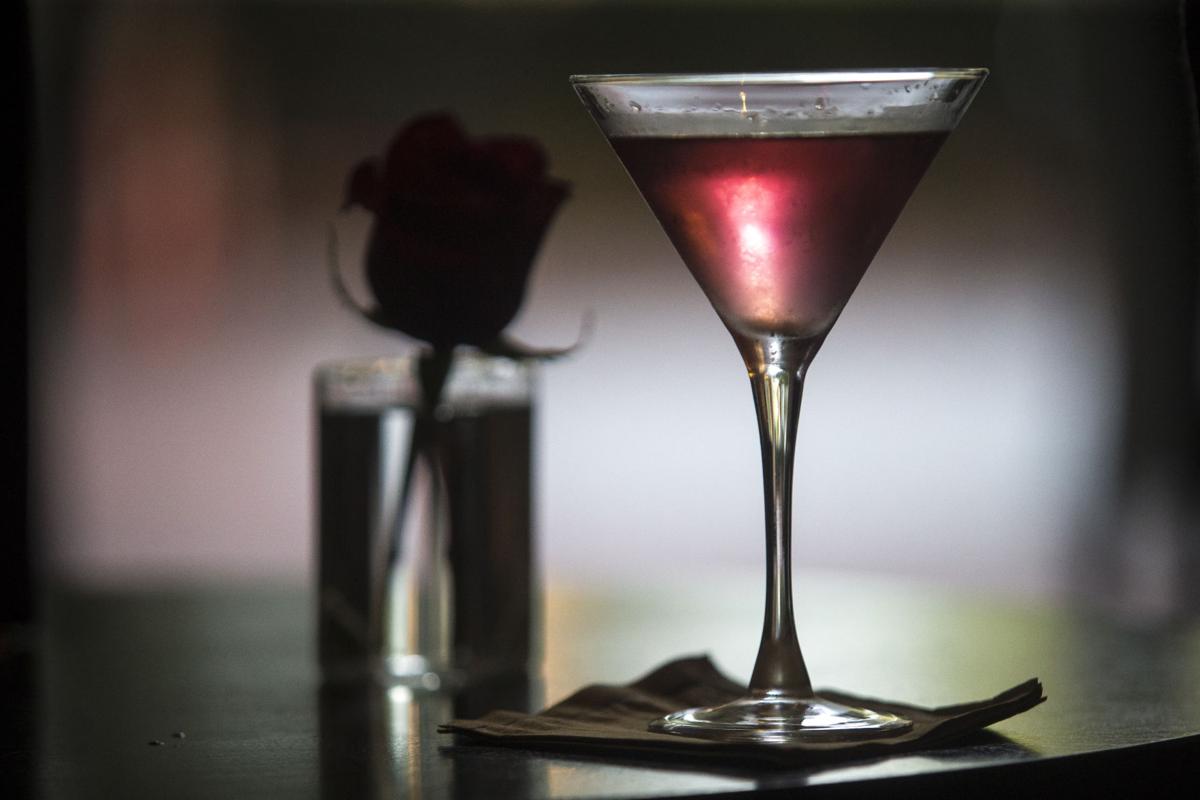 The JG Cosmo is named after artist Jonathan Green at the Thoroughbred Club inside The Belmond in Charleston. Andrew J. Whitaker/Staff 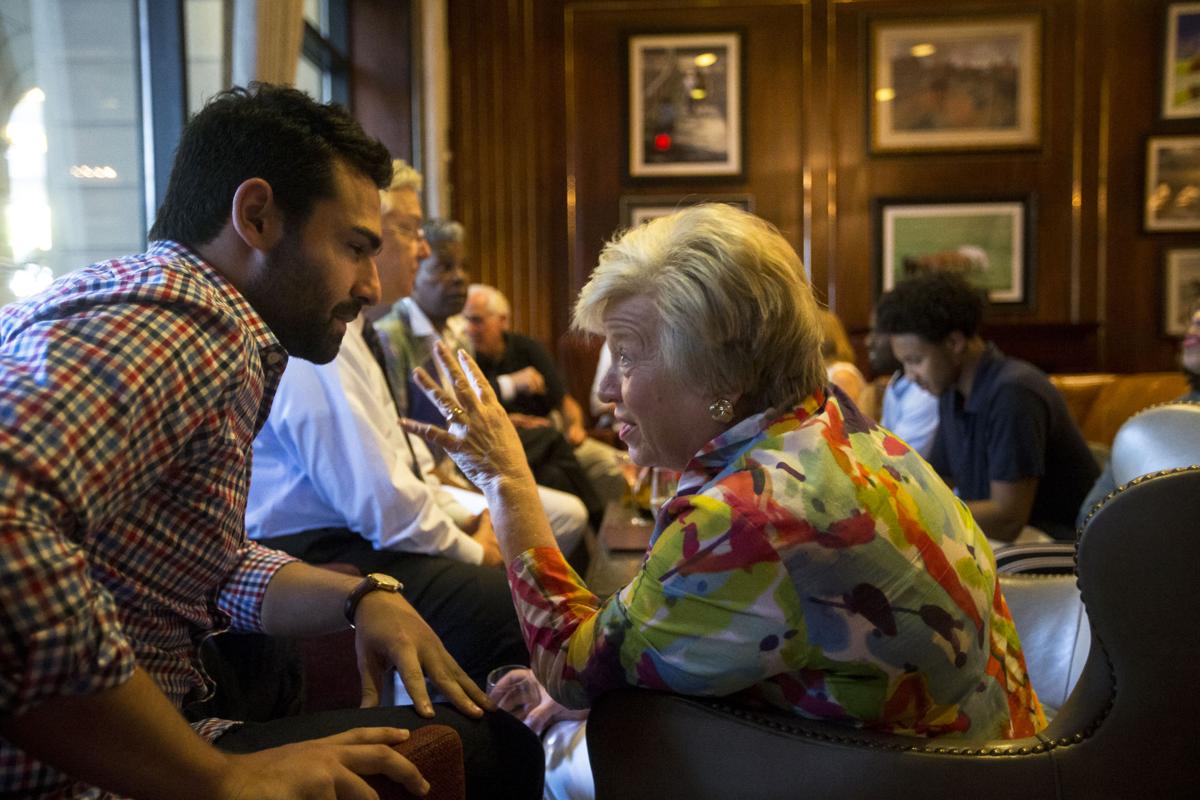 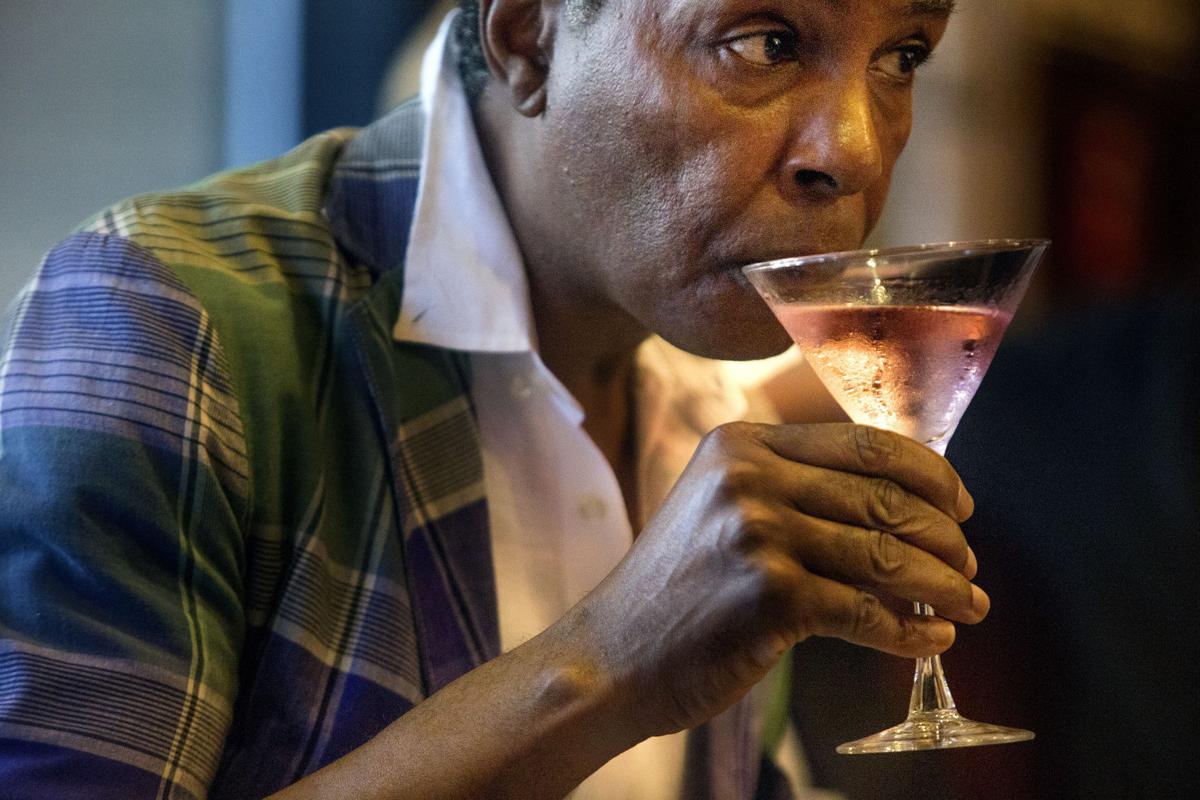 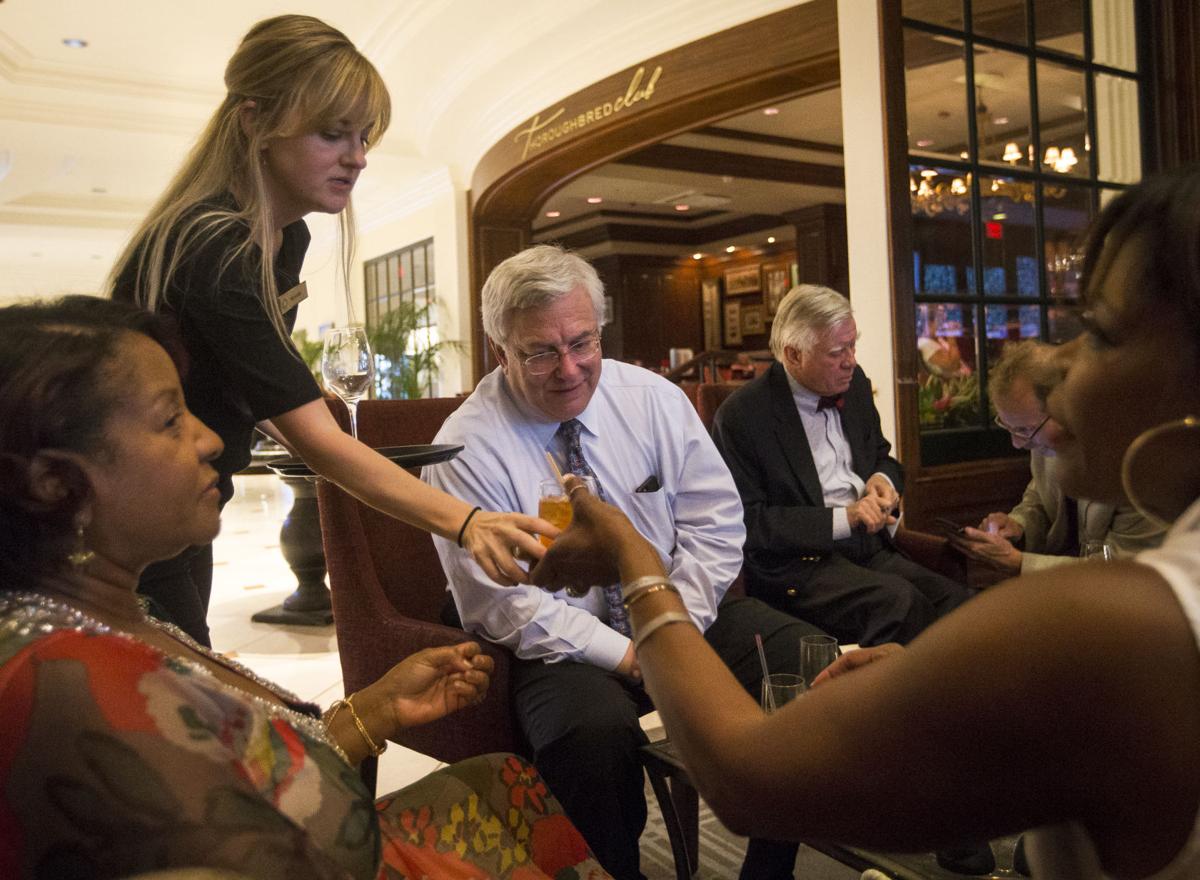 Dee Robinson Evans reaches for her cocktail with Kim Long, left, and Judge Richard Gergel while with friends at The Thoroughbred inside of The Belmond Monday, Aug. 12, 2019 in Charleston.Andrew J. Whitaker/Staff

Every Monday night at the Thoroughbred Club residents of Charleston meet for cocktails and snacks including artist Jonathan Green, Judge Richard Gergel and others. Monday, Aug. 12, 2019 in Charleston. Andrew J. Whitaker/Staff

The JG Cosmo is named after artist Jonathan Green at the Thoroughbred Club inside The Belmond in Charleston. Andrew J. Whitaker/Staff

Dee Robinson Evans reaches for her cocktail with Kim Long, left, and Judge Richard Gergel while with friends at The Thoroughbred inside of The Belmond Monday, Aug. 12, 2019 in Charleston.Andrew J. Whitaker/Staff

On any given Monday night at the Thoroughbred Club at The Belmond Charleston Place, you’ll likely stumble upon enough collective brainpower to catapult Charleston into the intellectual stratosphere.

That’s when the weekly who’s who of Charleston intelligentsia breeze in, order drinks and find a comfy perch on the well-appointed sofas and armchairs flanking a fireplace.

There, they catch up and meet minds, training their considerable brains on the topics of the day. A one-stop shop for all manner of wits and interests, they span the worlds of art, law, public policy, education and medicine. It’s the sort of gray-matter-powered mixer I’d call a salon.

“I call it the Monday night group,” says Richard Gergel, rolling bemused eyes at my chosen term. From his expression, I gather he finds it a tad high falutin’ for his tastes and his aims.

Most tend to weigh well Gergel’s opinions. He is, after all, a federal judge who recently penned a New York Times-touted book, “Unexampled Courage: The Blinding of Sgt. Isaac Woodard and the Awakening of President Harry S. Truman and Judge J. Waties Waring.” In it, he scrutinizes a case involving Waring that helped pave the way for the civil rights movement.

On the name, Kim Long dissents with Gergel. An elegant woman in a silky bob and gem-trimmed dress, the career educator warmly affirms her use of the word "salon" to sum up the weekly intellectual wanderings.

From a chic, leather sofa, artist Jonathan Green coyly shrugs, then sips a rosy Cosmopolitan. It was Green, after all, who stoked my romance with the notion of a newly formed Charleston salon, encouraging me to stop by. Last week, I finally did.

“We don’t lack for conflicting opinions,” Tom Tisdale muses from his seat next to Gergel. The prominent local attorney and playwright is a fixture in the city’s cultural scene, having been involved in the likes of Spoleto Festival USA and the South Carolina Historical Society, and is a fixture at the Monday group, too.

While Tisdale’s summation sheds light on the name debate, it was made about the lively exchange of ideas, observations and, yes, conflicting opinions that percolate each week. For more than five years, they have come together to quaff a drink — and have a think. Its current home at The Belmond’s Thoroughbred Club is the group’s third, having outgrown Caviar & Bananas and outlived the now-shuttered Bull Street Gourmet.

Gergel and his wife, Belinda Gergel, an author and former history professor, serve as de facto hosts along with Green. Together, the three warmly wave in new arrivals, bustling to make room among various seated circles, while offering introductions and enthusiasm all around.

“All are welcome,” the judge says. Belinda Gergel had already proved this to me when I tentatively approached the cluster. She immediately swooped me up in animated chat, gleaning my details and broadcasting them over a large coffee table to her husband.

Salon, group or gathering, it's certainly not the first of its kind in Charleston. Those with the slightest city savvy know well the curious ways of the St. Cecilia Society, whose sherry-tippling balls to this day call for full-length gloves and other famously arcane protocols.

However, in the society’s early days, which by most accounts date to the mid-1700s, it was the spawn of salons, serving as a private subscription concert series based on European cultural societies.

Named for the patron saint of music, the society afforded cultivated locals ambitious musical events. According to Michael Broyle’s book “Beethoven in America,” it also can lay claim to the composer’s debut in America, opening an 1805 concert with a Beethoven overture, and closing it with a piece from him as well.

David Shields, the McClintock professor of Southern letters at the University of South Carolina, alerted me to Alice DeLancy Izard, who dates back to the Republican Court — Martha Washington’s drawing room that organized a national web of salons. Maintaining salons in both New York City and Charleston, she promoted Court projects including education for women and the institutions such as theater and the ballroom.

In the 1700s, the British physician and writer Thomas Dale was known to hold salons, presumably in his Church Street home. He particularly championed the American theater, most notably writing and reciting an epilogue for the opening of the Dock Street Theatre.

Ada Clare, a Charleston aristocrat and actress, took her cultural meanderings to New York in the mid-1800s. There, according to Shields, she was dubbed the queen of Bohemia, presiding over the legendary Pfaff’s beer cellar, an artist-filled drinking spot brimming with American literary types.

During the Charleston Renaissance in the early part of the 20th century, its famed coterie of artists and writers kept regular company at the home of Laura Bragg, the director of Charleston Museum known to assemble groups for such discourse.

Gergel has a good chuckle over associating his diverse crowd with the famously exclusive St. Cecilia Society. And, while members demur when asked about any guiding subject matter, many note its explicit inclusiveness, with participants cutting a swath through age, race and gender, often alighting from far-flung travels and bringing other out-of-town friends in tow.

“There are so many different backgrounds and interests,” says Elijah Heyward, chief operating officer of the International African American Museum, who has stopped by with visiting friends from Washington, D.C., for a quick dabble in thoughtful repartee before dinner.

And converse they do. Long has her recently departed friend Toni Morrison on her mind, reminiscing with Green about the time in 2006 that the two traveled from Brussels to Paris to hear the poet speak at the Louvre. Missing the last train back, Long and Green wound up crashing on Morrison’s couch.

“She was so gracious about it,” Long recalls.

Elsewhere, Charleston City Councilman Peter Shahid brightly offers updates on Charleston’s 350th anniversary plans from his post as chair of the steering committee. Realtor Kay Kennerty metes out her painstaking, successful work with the city to tackle flooding on her downtown street. Pat Youngblood, a former Stanford University professor, relays how her downtown Charleston garden grows by way of the expert-level horticultural prowess in the room.

That engagement has radiated outward, too. According to its members, it was from this assemblage that Anne Cleveland, executive director of the Charleston Library Society, culled the inaugural lineup of the annual Charleston to Charleston Literary Festival, the star-studded literary series that might well be branded a mega salon.

The Monday group hatches other happenings, too. For the city's 350th anniversary celebrations, Shahid has enlisted Green as co-chair. There was also Green and Long's brainchild project, the “Requiem for Rice" musical tribute to unmourned, enslaved persons in the Lowcountry, presented at Mother Emanuel in 2017.

The group was also the genesis of Green's painting, "Breath of Freedom," which was created after Judge Gergel recounted a story to the artist set at the Charleston Federal Courthouse on opening day of the first legal challenge to public school segregation in May of 1951, Briggs v Elliott. It since evolved into a commemorative apparel collection.

It’s also a vibrant microcosm of the array of culturati in this city, and what might transpire when they join together in a parlor and get to parsing. I have quite a few thoughts and opinions on the topic, and its benefit for our local arts and culture scene — far more than I do column inches.

No worries, though. I’ll just save them for next Monday night.

When it comes to great arts towns, Charleston doesn't make Top 10. Here's how to fix that

Charleston brims with theater companies, visual arts and even has an international arts festival. Here's how can we raise its national rankings — and why it matters.

The arts feed their souls, but other work buys their groceries. Members of the Charleston arts community supplement their professional passion with all manner of jobs.

How Charleston's arts organizations cope with dangerous hurricanes and storms

Evacuations. Flooding. Road closures. A hurricane tends to divert attention. And that can leave arts organizations is a pickle.

In a day like ours, when “goodness” and moral clarity are trashed in public life and people might even be saying “What the heck does that mean?” Toni Morrison is like a light in the gloom.