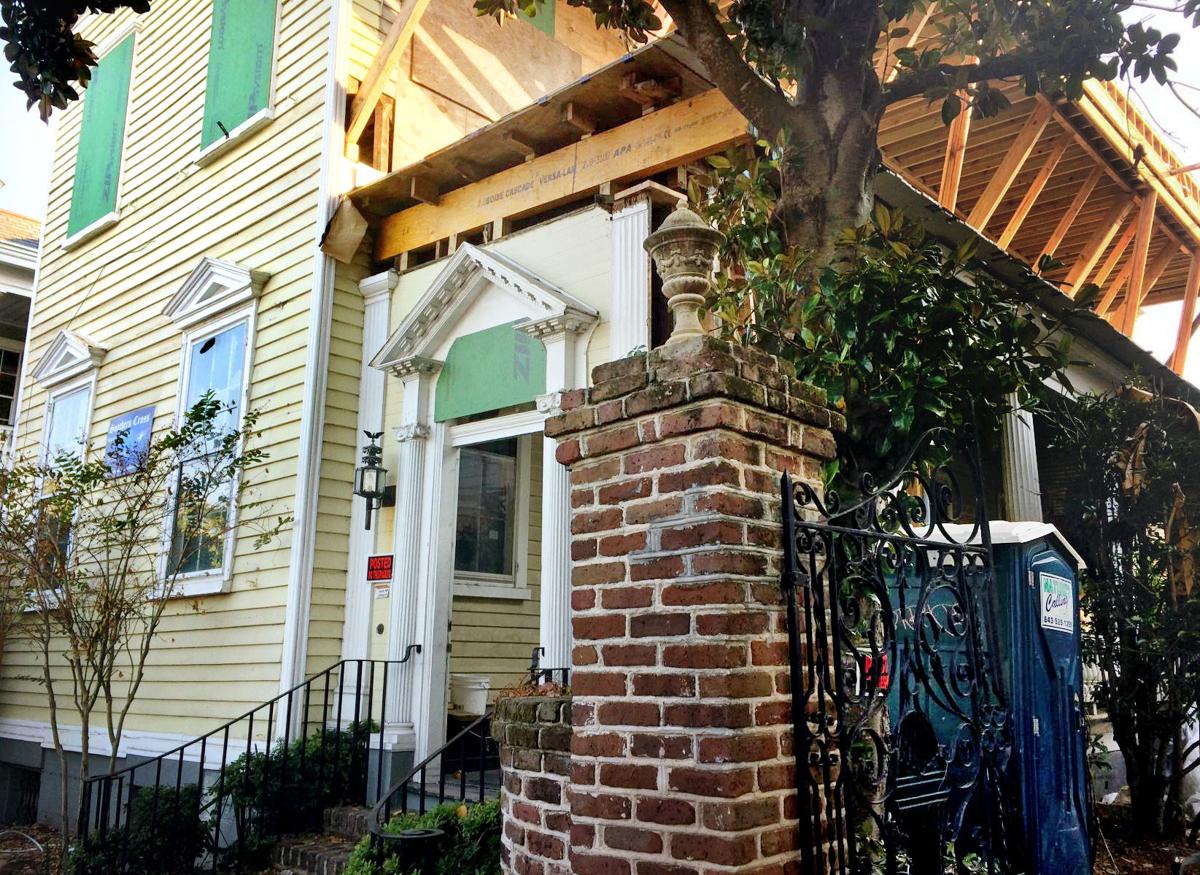 The owner of 42 Rutledge Ave. won approval from the city to raise his home by 2 feet, 5 inches. The city is grappling whether others should be able to do so, too. Robert Behre/Staff 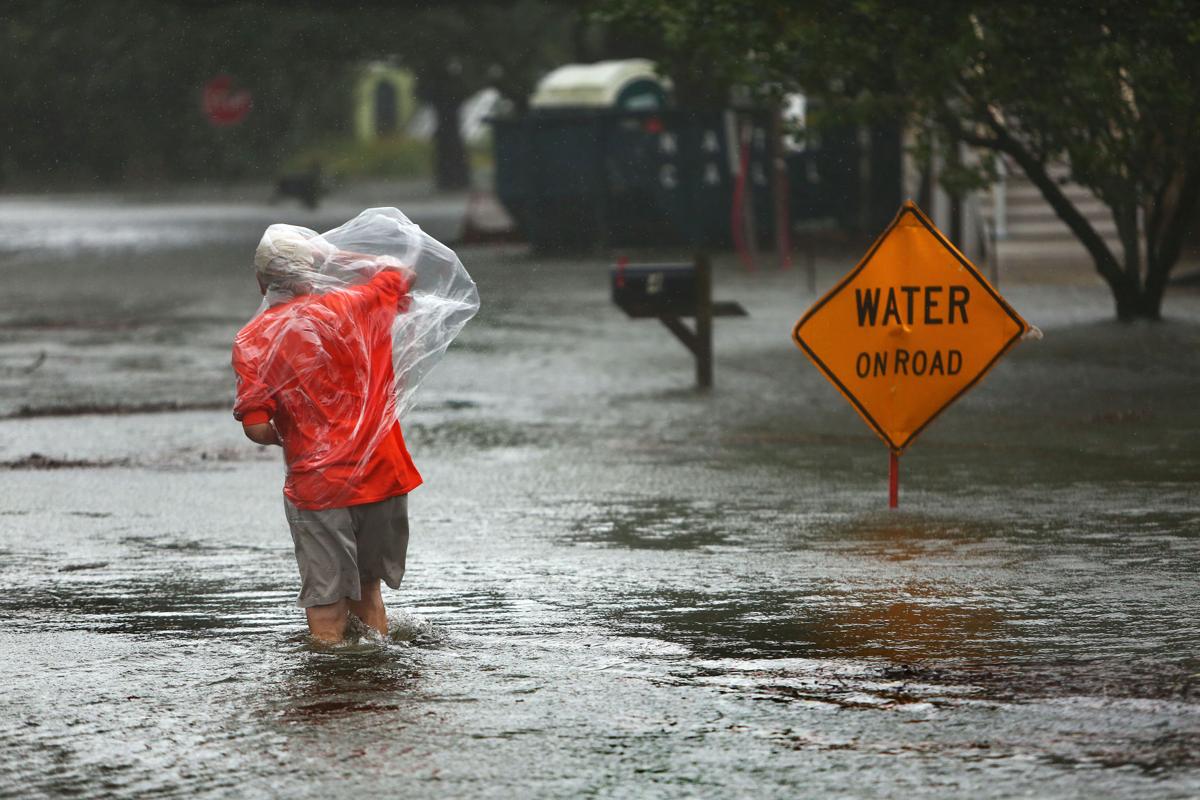 David Lynn trudged though a flooded Williams Street in Mount Pleasant during Tropical Storm Irma in September. Charleston and other coastal cities are grappling with the reality of sea level rise and increasingly severe floods. Wade Spees/Staff

The owner of 42 Rutledge Ave. won approval from the city to raise his home by 2 feet, 5 inches. The city is grappling whether others should be able to do so, too. Robert Behre/Staff

David Lynn trudged though a flooded Williams Street in Mount Pleasant during Tropical Storm Irma in September. Charleston and other coastal cities are grappling with the reality of sea level rise and increasingly severe floods. Wade Spees/Staff

In a move that one Charleston preservation leader called "a sea change," the city will be more receptive than ever to property owners' requests to elevate their homes or other buildings, even along its most historic streets.

The city held a day-long workshop Friday to discuss design solutions that would allow historic buildings to be elevated while minimizing disruption to the city's ambiance, one that has given the city a national reputation and fueled its multimillion-dollar tourist economy.

The workshop came several weeks after Tropical Storm Irma flooded dozens of historic homes downtown, many for the third time in as many years.

It also came on the same day a new federal report said sea levels may rise more rapidly than previously thought. NOAA’s forecast for Charleston, depending on “intermediate” or “intermediate high” scenarios, calls for 6.33 feet of sea level rise by 2100.

City Architect and Preservation Officer Dennis Dowd said the Board of Architectural Review previously would have encouraged owners of historic homes to get a variance so they did not have to raise the elevation.

“I don’t think any longer we can say, ‘Sorry, we prefer you go get a FEMA variance on this,’” he said. “The cost of insurance and long-term preservation of the building is the greatest consideration.”

Charleston architect Julia Martin said the city's new openness to elevating homes "is a huge shift in our mindset. It’s going to be a different conversation starting now.”

“This is our new normal,” said Winslow Hastie, chief preservation officer with the Historic Charleston Foundation. “If we want these properties to stay occupied and preserved, we’re going to have to bend a little, probably way moreso than we would have a decade ago.”

Kristopher King, of the Preservation Society, said talk of elevating homes and buildings must go hand in hand with other infrastructure work to make flooding less likely.

“We can’t take the city of Charleston and put it up on stilts,” he said. “What we’re hearing loud and clear is that this has to be part of a larger conversation that has to do with mitigation of the city as well as the built environment. This can’t be all expected to roll down and fall on the homeowners.”

Roderick Scott of L&R Resources, a Louisiana-based flood mitigation firm, gave a national overview of the problem. He noted his state has elevated 36,000 structures since Hurricane Katrina came ashore in 2005, the first of several destructive storms there.

Much more remains to be done. The nation has about 3 million structures built before federal flood maps were drawn to encourage builders and city code officials to ensure new structures were being built high enough to reduce the chance of floods.

"Now only 20 percent of the buildings out there are pre-flood map, but they are our irreplaceable historic buildings that connect us to our past," Scott said. Another 10 million to 15 million were built based on early maps, which may now be out of date.

"We’re at the 'lift them or lose them' point," Scott added. "Nobody asked to be in this era, but we as adults need to lead and hand these buildings off to our children, tougher and more resilient. The water is coming. We know the sea is rising.”

Many residents voiced frustration at seeing their homes flood repeatedly in recent years, which has displaced some and stirred financial anxiety among others. City Public Services Director Laura Cabiness also gave an overview of other projects and grants the city is pursuing to improve drainage.

“Flooding is at the top of everybody’s mind right now," she said. "There’s a lot of support to put more resources toward it and make it a priority.”

Elizabeth Hagood, whose Lamboll Street home has flooded three times, said she can’t know how much to invest in her home until she knows more about what the city will invest on drainage, raising sea walls and the like.

“We love this city. We want it to look right, but we want to live here,” she said. “If we can’t keep the economic value of our homes and maintain that and live here, then you can forget how the city is going to look.”

The Historic Charleston Foundation sent out an alert to its supporters highlighting the dilemma now facing parts of downtown.

"Traditionally, raising historic buildings is not a good preservation practice. It disrupts their architectural proportions, changes the character of the streetscape, and can lead to structural issues," it said. "Sometimes, however, exceptions have to be made. Charleston is currently faced with two choices, neither of which is particularly appealing: raise many of our historic structures or watch them be destroyed by repeat flooding. We’re losing something either way."

While the city recently succeeded in getting a Federal Emergency Management Agency grant to buy out and raze some of West Ashley's most flood-prone homes, few in the city are interested in tearing down homes in the historic district and leaving the land empty.

The city plans to continue work on coming up with a set of design standards or guidelines to educate property owners about how best to elevate their buildings.

Dowd said some of the special challenges include elevating only one of groups of buildings, either adjoined buildings or similar rows of buildings along a street. Also, raising small buildings such as Freedman’s Cottages can be difficult because their new elevation would dramatically increase and alter their proportions. Some in the audience murmured when a slide showed Rainbow Row, an iconic stretch of 18th century town homes on East Bay Street.

"In some cases we’re looking at raising these buildings 7, 8 or 9 feet. We're looking at creative ways to deal with this," Dowd said. "Some houses might need to be moved back from the street to make room for stairs."

Architect Bill Huey said elevating buildings involves much more than aesthetics: It also can trigger new codes that could add a new layer of complexity and cost.

Scott said Friday's session in Charleston was the first of its kind he has seen in the country. While he noted the costs can be large and the federal government might offer little help, he said the challenge can be met, noting the nation put a man on the moon in eight years.

"This is is awesome. Design is huge. Go Charleston," he said. "We can do this. Charleston will look different, but it will be more resilient for many more ages to come."