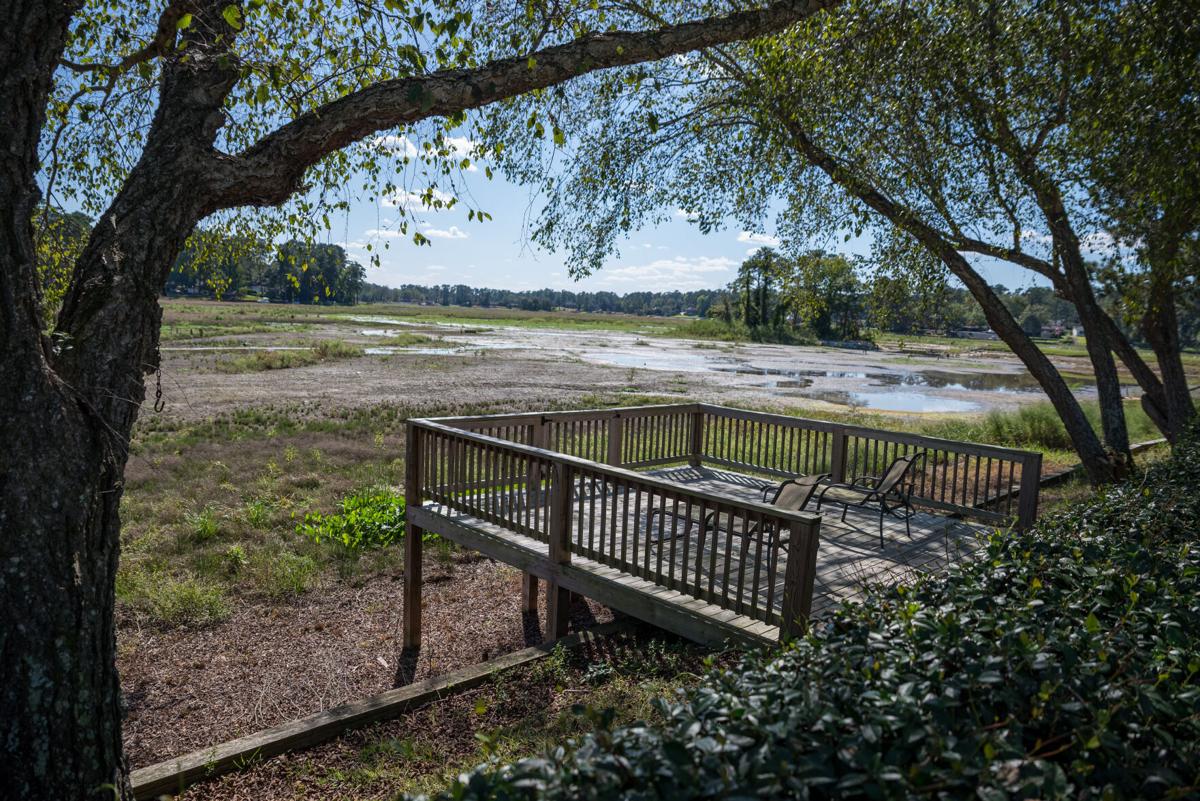 Lake Katherine as seen from the back yard of Donna Oliphant. Over a year ago Lake Katherine’s water was drained for a new sewer line being put in along the the Gills Creek watershed. John A. Carlos II / Special to The Post and Courier 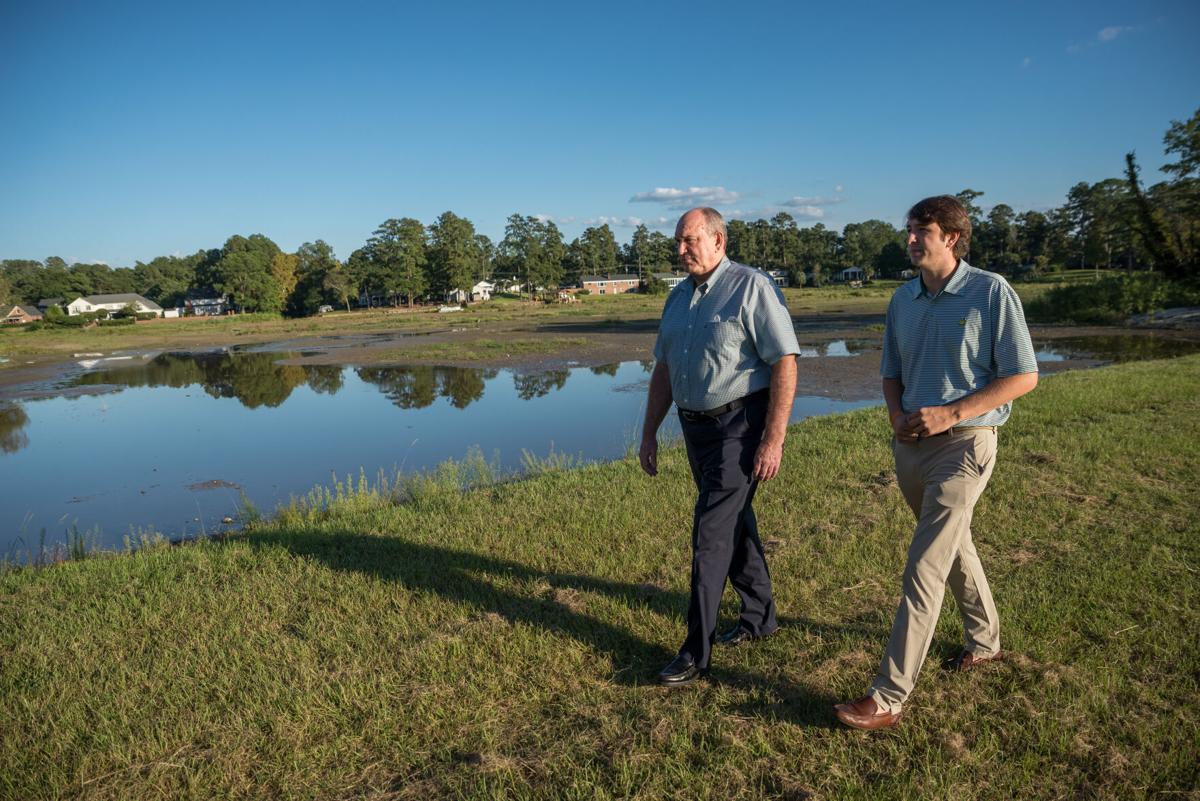 Elliott Powell and Austin Elliott Powell recall personal 2015 flood stories on the bank of Lake Katherine on Oct. 2, 2020. John A. Carlos II / Special to The Post and Courier 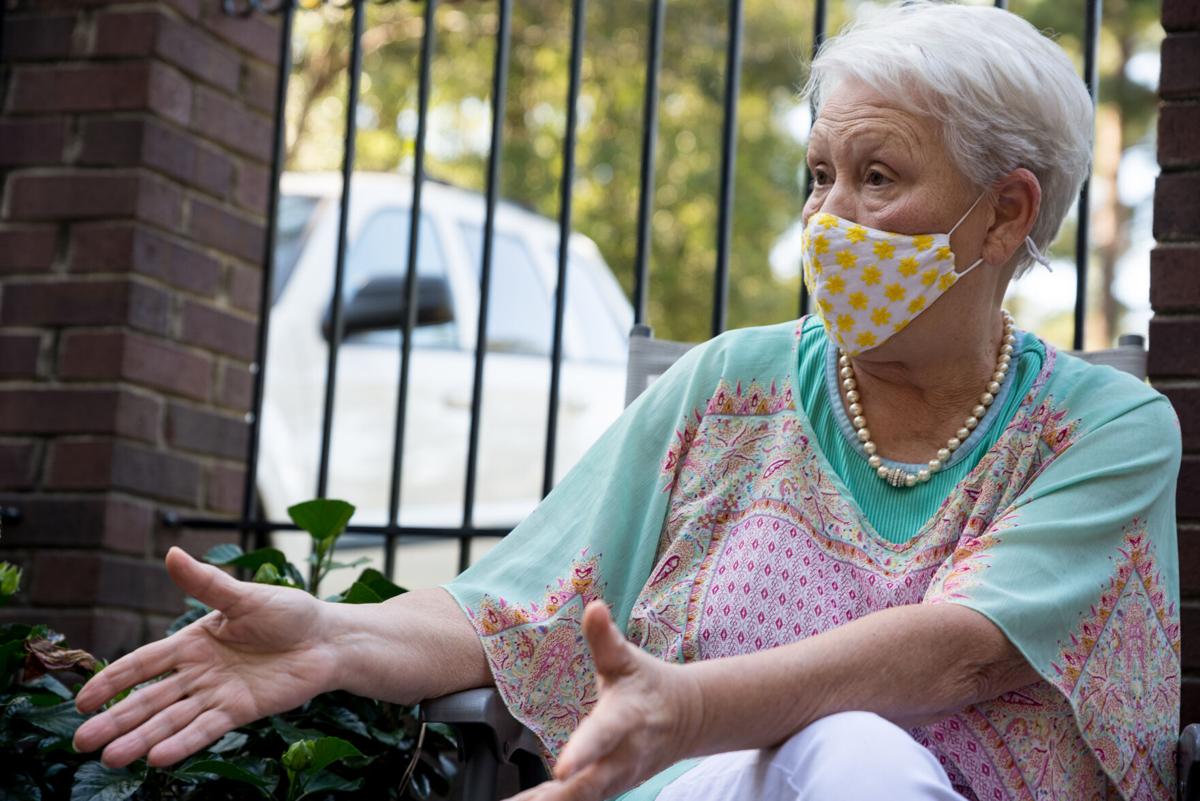 Gloria Wilson recalls memories from the historic floods of 2015, at her house on Rickenbaker Rd. John A. Carlos II / Special to The Post and Courier 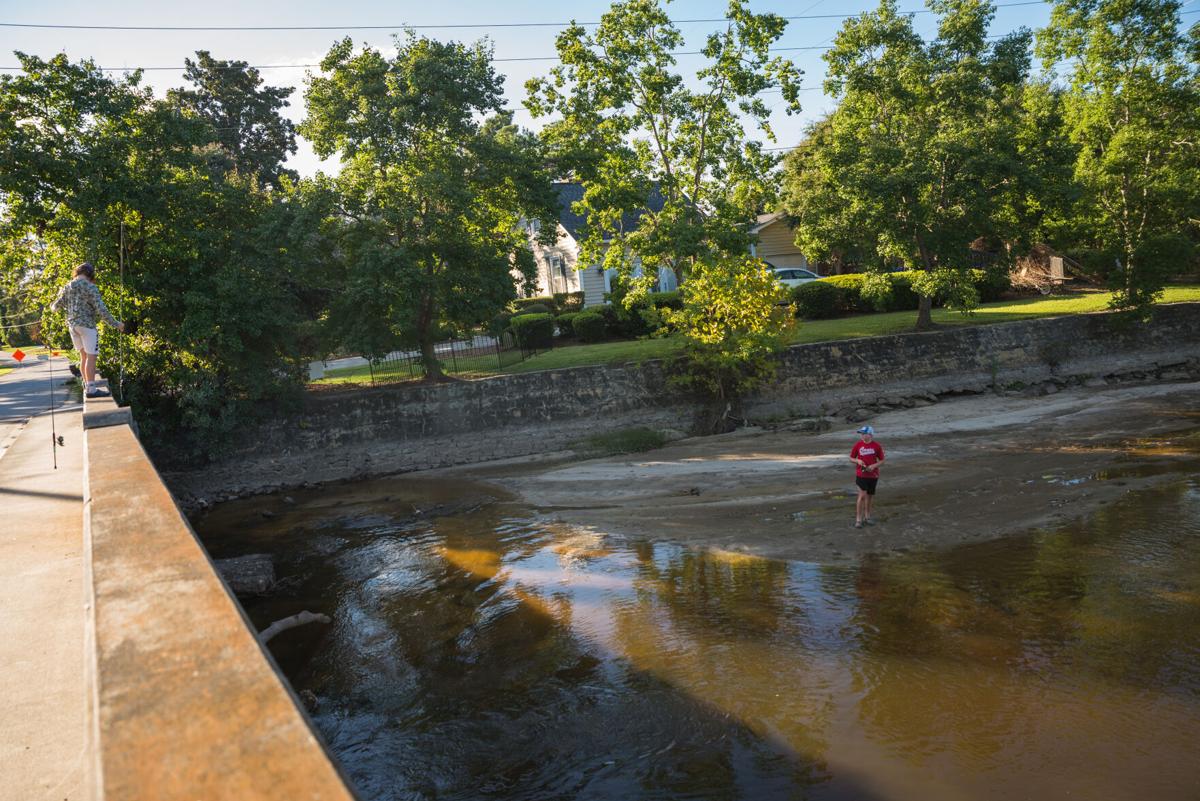 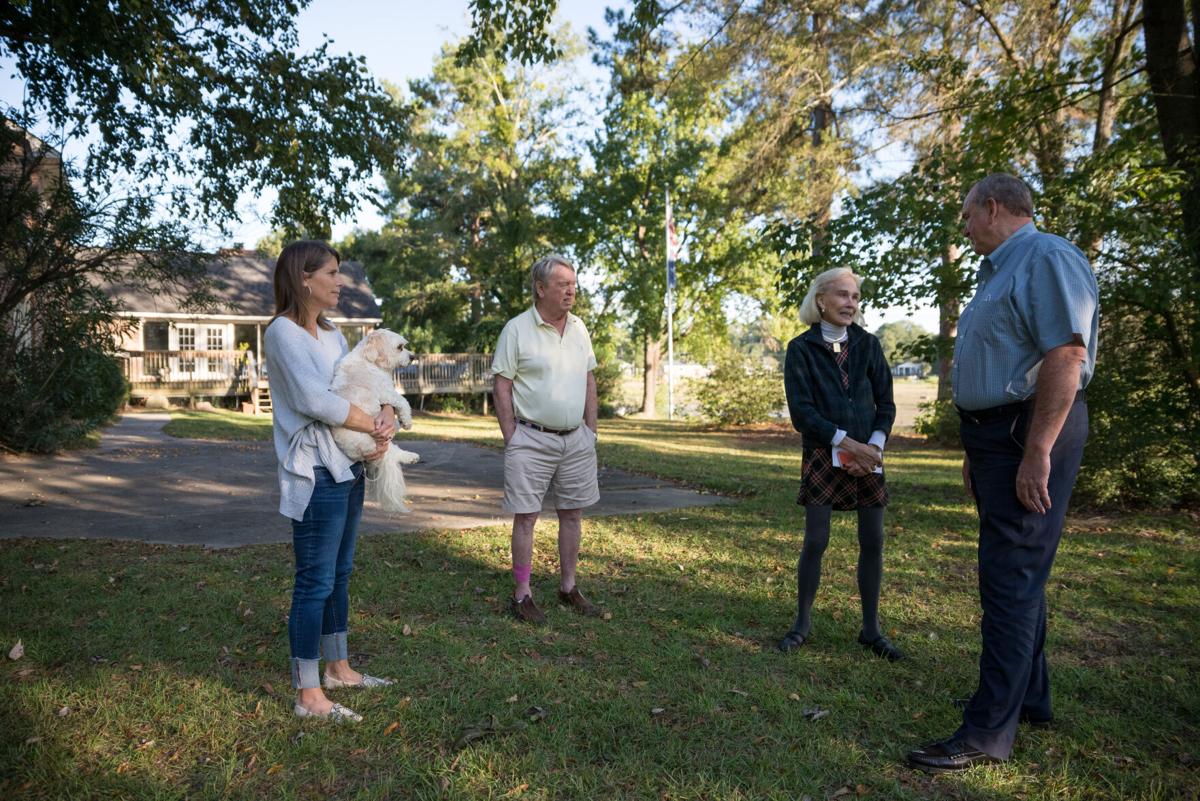 Woodlake Drive residents Christy Slaughter, Carol and Dickie Johnston and Elliott Powell, tell stories about the historic floods of 2015, on Oct. 2, 2020. John A. Carlos II / Special to The Post and Courier 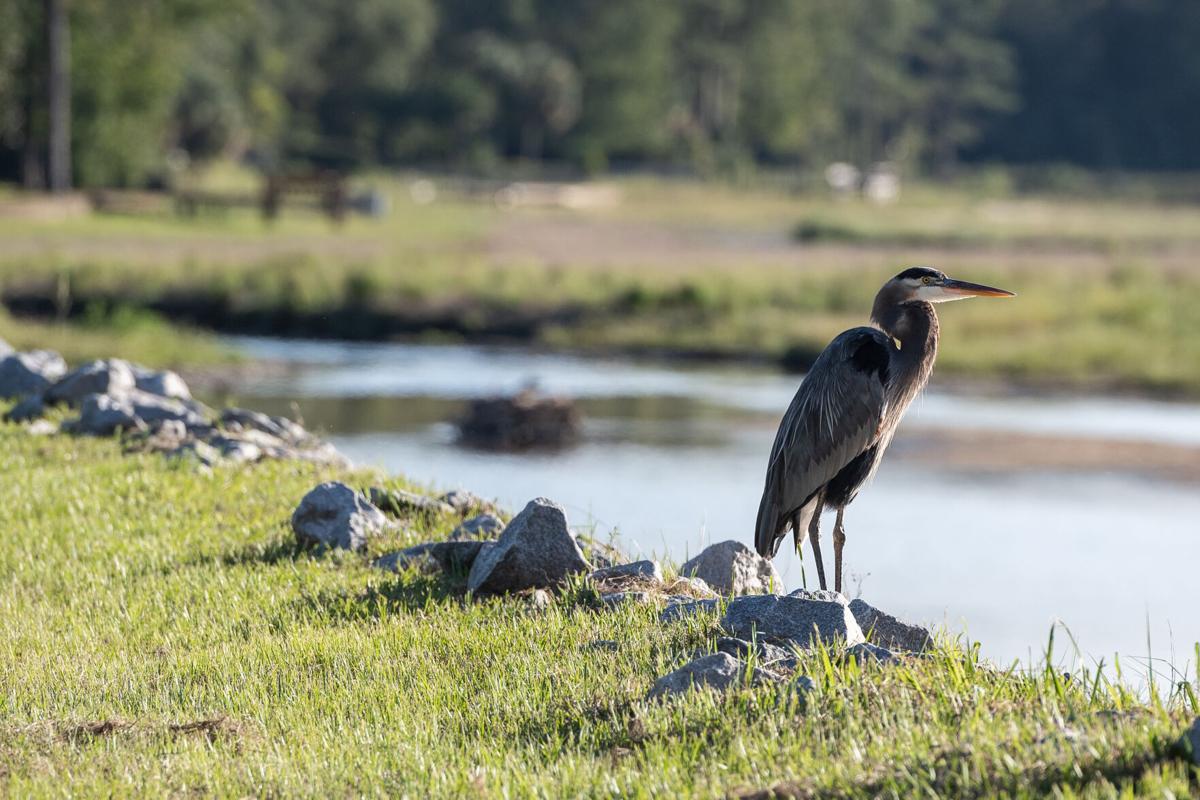 Lake Katherine as seen from the back yard of Donna Oliphant. Over a year ago Lake Katherine’s water was drained for a new sewer line being put in along the the Gills Creek watershed. John A. Carlos II / Special to The Post and Courier

Elliott Powell and Austin Elliott Powell recall personal 2015 flood stories on the bank of Lake Katherine on Oct. 2, 2020. John A. Carlos II / Special to The Post and Courier

Gloria Wilson recalls memories from the historic floods of 2015, at her house on Rickenbaker Rd. John A. Carlos II / Special to The Post and Courier

Woodlake Drive residents Christy Slaughter, Carol and Dickie Johnston and Elliott Powell, tell stories about the historic floods of 2015, on Oct. 2, 2020. John A. Carlos II / Special to The Post and Courier

COLUMBIA —In the ‘50s and ‘60s, real estate developers saw an opportunity — waterfront property that would fetch higher prices. People, they learned, would pay more for scenic lake views and a backyard dock.

They began building more earthen dams — 13 to 30 feet long — across Gills Creek, northeast of South Carolina’s capital city. The once meandering stream became a series of shallow lakes, stair-stepping up from the southernmost Lake Katherine and boosting property values.

Those waterfront views would come with a price and came crashing down at the beginning of October 2015.

Two feet of rain fell on parts of the Midlands, overwhelming an antiquated water management network. The catastrophic flooding led to nine deaths around Columbia and the failure of at least 45 dams in Richland and Lexington counties. Hundreds of houses were damaged as creeks swelled to 11-foot-deep rivers running through businesses and neighborhoods.

Five years later, those neighborhoods are full of new and refurbished homes and many new faces. Property values rebounded to all-time highs as longtime residents rebuilt and sold.

But work still remains as more than 100 families wait for government funding to finally flow for those without insurance and unable to afford a rebuild. And residual lawsuits seeking to lay blame for the catastrophe hang in the shadows.

5 years ago, a 'biblical' flood ushered in SC's wetter future

“Still, it’s raw,” said Elliott Powell, who lives on Lake Katherine, a lake dug and dammed by the U.S. Army in the ‘40s as a water source for nearby Fort Jackson. The lake’s dam would be overrun but not breached in the floodwaters.

Powell grew up in homes in Gills Creek Watershed — the state’s largest urban drainage basin — which collects stormwater in Richland County northeast of Columbia and funnels it to the Congaree River. He serves on the watershed association board.

An avid surfer, Powell watches the weather closely. And in early October 2015, he knew something big was going to happen. He and his son readied his boat the night before. They would be among about 60 boat owners pulling people out of homes and getting them to safety that fateful day.

Among those rescued would be an 85-year-old woman who gripped the door knob of her Woodlake Drive home to keep the swirling waters from washing her away.

What he remembers most is the sense of pride and community — neighbor helping neighbor — that came from such a terrible incident. But a return home has lingered for some.

“There are certain spots that probably are having more of a struggle of getting back to normal,” Powell said.

Viola Vereen was finally able to move back to her home this past December, four years after the historic flood.

“I love it. Such a joyful time to know that I have my key and I can move in,” she said. “The burden has just been lifted off of me.”

Vereen’s is one of 28 homes across Richland County demolished and rebuilt through the federal Community Development Block Grant-Disaster Recovery program.

The county, along with Mungo Construction, have completed work on 15 homes severely damaged by the flood. Another 18 are expected to be completed by the end of the month, Vice President Ward Mungo said.

“It can be difficult being in limbo for so long,” he said, recalling how Vereen became choked up when presented with the keys.

In addition to home replacements, Richland County also helped cover repairs at 81 homes that did not require a total rebuild and have replaced 56 mobile homes, said Clayton Voignier, who oversees flood recovery efforts related to housing as director of Richland County Community Planning and Development.

But there are still more than 100 people on the waiting list, largely across more rural Lower Richland.

The county has another $21.8 million in separate mitigation funds, which it hopes to use to take care of more of those homes, Voignier said, as well as constructing water supply and drainage infrastructure across the county over the next 12 years.

In neighborhoods east of Columbia near Forest Acres, a group of residents still await the results of lawsuits with the homeowners associations over burst dams.

Sandra Hennies had to be rescued in a jon boat from her Burwell Lane home, just south of Lake Katherine, with her then husband, as they walked in a haze through waist deep water.

They didn’t have flood insurance. Their home had been paid off, so that left them essentially rebuying their home all over again.

“We basically had to go into debt because several people were negligent,” Sandra Hennies said.

Hennies is one of about 21 homeowners in joint lawsuits alleging negligence against three homeowners associations for Carys Lake, the Rockyford lakes and Lake Elizabeth whose dams broke, sending foot after foot of water rushing downstream and flooding her Gills Creek creekside home.

In the suits, the home and business owners say the associations did not heed DHEC’s warnings and suggestions, such as annual engineering reviews or purchasing of liability insurance.

Hennies doesn’t hold out much hope for relief as the lawyers still try to negotiate a settlement five years after the flood.

Hennies rebuilt and continues to live creekside in the Lake Katherine area property. She still loves the neighborhood, though it’s greatly changed.

The older homes were either remodeled or torn down and rebuilt altogether. Neighbors, many of whom had lived there for decades, sold and young families with children quickly swooped in to take their place, often paying premiums for lakeside lots that had been under some 11 feet of water.

“I was shocked that they were so anxious to buy in an area that had been totally flooded,” she said.

Gloria Wilson also has all new neighbors in the houses behind her own home.

Wilson moved to Rickenbaker Road just south of Lake Katherine in 1994. She remembers visiting with her neighbor to the rear during those first few days of October as the neighbor was putting all of her belongings up on tables and preparing to evacuate to a friend’s house.

“It’s going to be bad,” Wilson’s friend told her.

It wasn’t until Wilson climbed atop her couch to see her neighbor’s home completely submerged that she realized how true that statement had been. Wilson had to wade through shin deep water to get out of her own house. The water would rise midway up the trunk of the magnolia tree in her front yard.

The dams had broke — five of them along the Gills Creek Watershed, including Semmes Lake on Fort Jackson.

A separate lawsuit filed by residents of the upscale King’s Grant neighborhood, which claimed the Army made no repairs though it knew the Semmes Lake dam was deficient, has been dismissed.

Since then 20 dams have been repaired statewide, according to S.C. Department of Health and Environmental Control; 12 have been permitted for repairs; one application is under review; one was decommissioned; nine remain unfixed, permanently in some cases.

The earthen dams of Gills Creek are generally the property of homeowners associations. Even though they are small, many are classified as “high hazard,” meaning a breach would result in fatalities.

When the dams were built, there was very little development in the northern reaches of the watershed. Now highways, shopping centers and neighborhoods have replaced the open land that once served as a buffer for storm runoff.

And they’re expensive to repair.

A large chunk of Spring Lake Dam’s concrete spillway broke off into Forest Lake, where it remains. It had to be replaced to the tune of $400,000 to $500,000, paid for by the 40 or so residents of Spring Lake.

To help with future repairs, a number of communities set up special tax districts to raise funds.

For the dozen or so residents of Walden Pond Dam, mostly retirees, the cost was too much and the dam goes unrepaired. With the loss of the pond, many have lost the equity in their homes, according to Powell.

“Most everybody had to refortify and re-engineer,” Powell said. “We all learned a big lesson about making sure the dams were inspected.”

Homes were built higher up off the ground. Air conditioning units were put on stilts. The Guingards opted to raise their home some 10 feet higher.

Of houses on Bruce Guignard’s street, at least four were rebuilt new and sold to new families. He also said the past flood has not discouraged people from moving in nor has it deteriorated property values. His neighbor’s house sold for a premium, $1.5 million.

Guingard was out of town that first week of October. His wife, Claudia, was home climbing one stair after another to the second floor of their house as the water rose. From the staircase she snapped photos as their furniture floated in five feet of flood waters inside.

To date, Richland County has bought out 59 homes; all but two have been demolished. A large number are located in the Timberlane area, for a total of 6 1/2 acres that are expected to be converted into a tree planting. Those scattered elsewhere in the county will become public green spaces.

Columbia has acquired 20 homes, with all but one demolished.

The city has used federal funds to repair several homes and anticipates more in the coming months. It has also secured federal funding to repair the canal on the Congaree River, a major source of drinking water to residents.

In Forest Acres, land behind the former Four Paws Animal Clinic has been donated and the city is working with a landscape architect to create a public green space that will double as a layer of future flood protection.