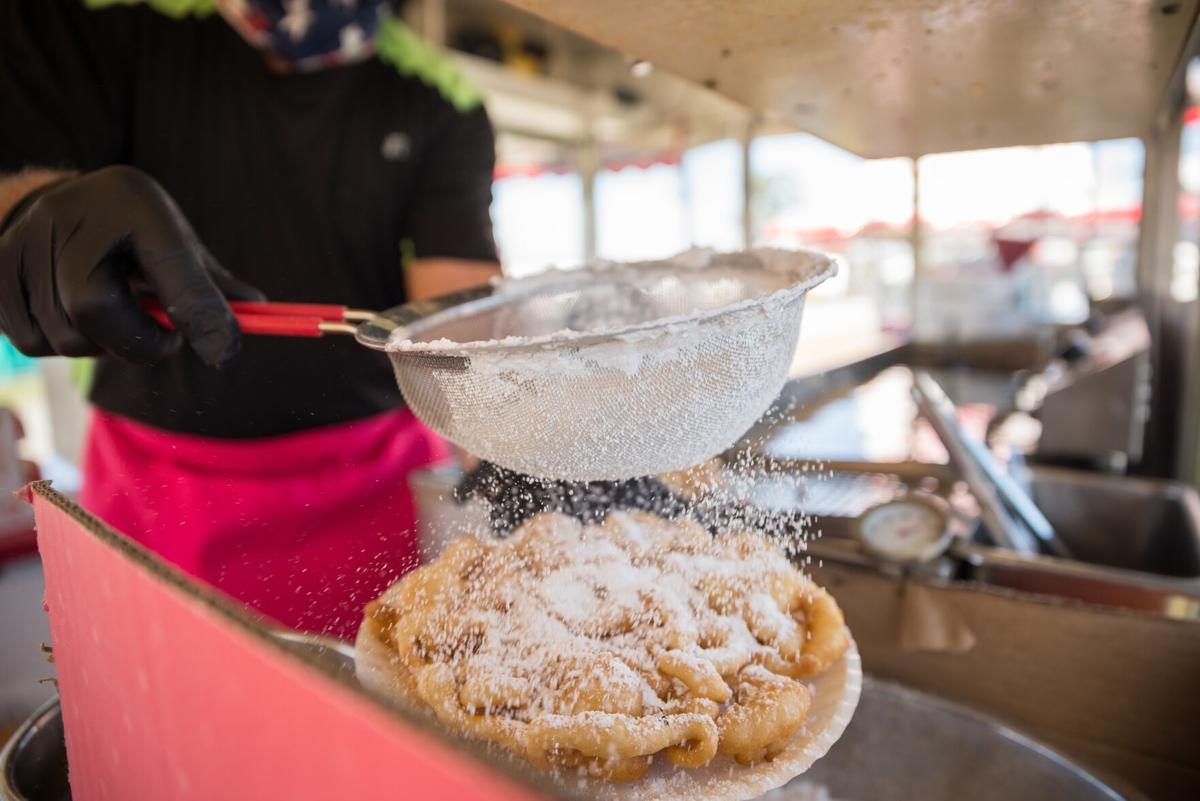 A Daley's worker makes a funnel cake during a soft opening of the drive-thru South Carolina State Fair on Monday, Oct. 19, 2020. John A. Carlos II/Special to The Post and Courier 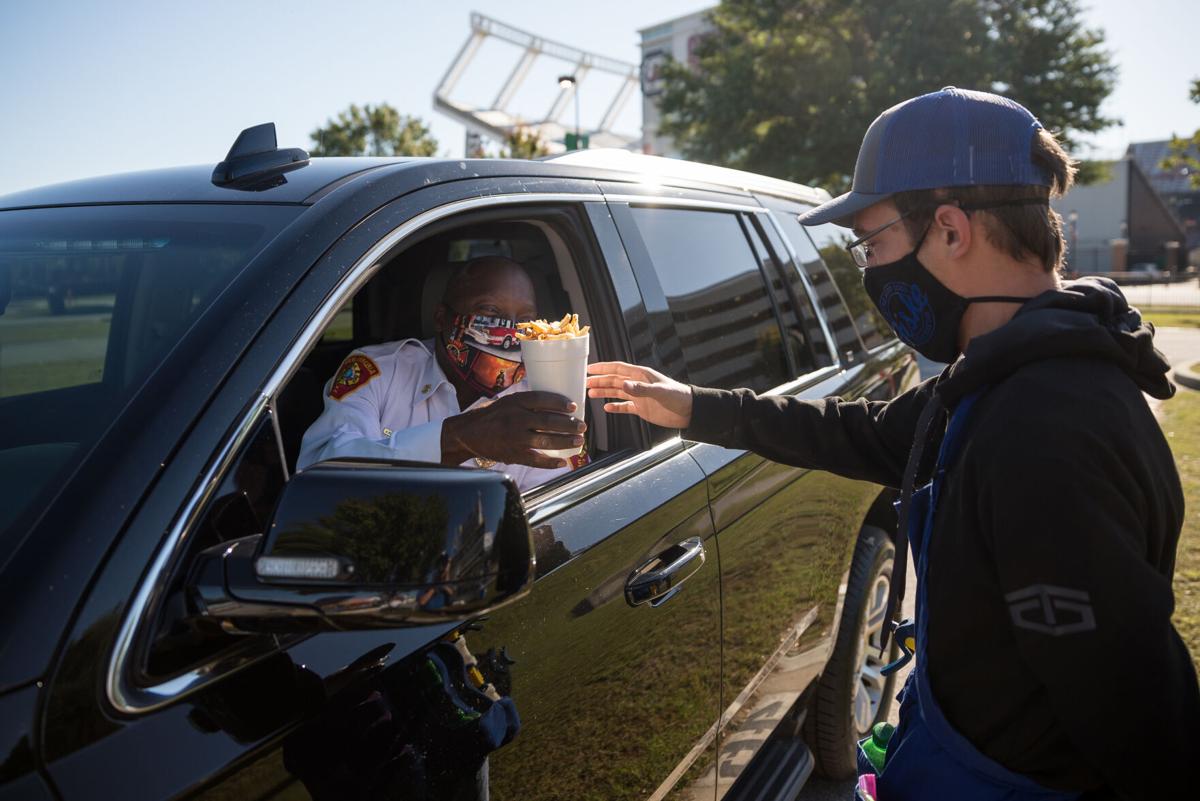 Columbia Fire Chief Aubrey Jenkins gets some Fiske Fries at a soft opening of the drive-thru South Carolina State Fair on Monday, Oct. 19, 2020. John A. Carlos II/Special to The Post and Courier

COLUMBIA — Going off certain sounds and smells alone, you might be fooled into thinking, just for a moment, that a normal edition of the South Carolina State Fair has arrived.

But like so many things during the COVID-19 pandemic, this year's version of the fair is anything but normal.

The state fairgrounds in Columbia were set to host the 151st edition of the State Fair this year, complete with the requisite rides, musical performances, games and more. But the coronavirus made hosting such a large in-person event — more than 400,000 people attended the two-week fair in 2019 — an impossibility.

So organizers switched to a drive-thru version of the fair. On Tuesday and Wednesday, patrons will be able drive into the fairgrounds — for free — and see numerous exhibits, including livestock, antique firetrucks, artwork, and agricultural displays.

Additionally, starting Tuesday and running through Saturday, guests will be able to drive up and purchase a number of traditional fair foods from vendors that have been a part of the event for decades.

The Post and Courier on Monday was able to take part in a preview of the drive-thru food portion of this year's State Fair. And while the overall experience pales in comparison to a regular State Fair — typically part of the charm of the event is being able to grab a corn dog or a turkey leg and meander through the fairgrounds, taking in the lights and the sights and trying to work up the courage to ride the Crazy Mouse — many will likely take comfort in the opportunity to grab some of the foods that hark back to more normal times.

From Daley's corn dogs to Fiske French fries to Sugar Shakers elephant ears, the aromas that have for years been synonymous with fall on the fairgrounds beside Williams-Brice Stadium will hit you the moment you roll down your window. For the food portion of the fair, cars enter at Gate 6 and wind through the fairgrounds, with attendants pointing the way.

And while attendees at the drive-thru fair will likely appreciate at least a little piece of normalcy in a chaotic year, it's clear that the vendors also are relishing the chance to ply their trade at time when opportunities have been few and far between.

Cindy Wright, owner of Florida's Sugar Shakers elephant ear stand, normally works about 30 different fairs and festivals along the East Coast each year. But most of those events have dried up amid the pandemic. The drive-thru S.C. State Fair is her first event since March, she said.

"The first thing that goes through my mind is that we get to work," she said Monday as her staff worked to prepare elephant ears for the modest preview crowd. "We are very, very excited about that. With this, people will at least get a taste of what they are missing with the fair."

For many of the food vendors gathered for the drive-thru fair, this week marks something of a family reunion. Normally they would have bumped into one another at numerous stops along the fair and festival circuit. But with COVID-19 shutting down so many events, opportunities to sling grease and swap stories have been hard to come by.

"This is like a homecoming," said Bill Prowant of Fiske Fries. "We get to come together and reminisce a little bit. This is a lot more special, because we get to compare notes how things have been here and there throughout the country.

"It's almost like coming home from a war. We've all been through it. Now we've got to figure out how to adjust and go forward."

The S.C. State Fair has been a key component of Cliff Daley's life. He runs Columbia's Daley's Dogs, the venerable corn dog and funnel cake business that his father started back in 1962. Daley's stands have been a fixture at the State Fair for decades, and he has three trailers set up at this year's drive-thru version.

Daley typically works about 15 fairs or festival every year, but that has been slashed amid the coronavirus. He'll probably do about 30 percent of the business this week that he'd do at a regular version of the State Fair, he estimated.

Still, he's thankful for the chance to sell some corn dogs and funnel cakes, drive-thru style.

"We all have a little hope," Daley said. "We have this opportunity that has been extended to us, and to our customers in Columbia and South Carolina. I think this South Carolina State Fair is the number one eating fair in the Southeast. They are keeping the food tradition alive."