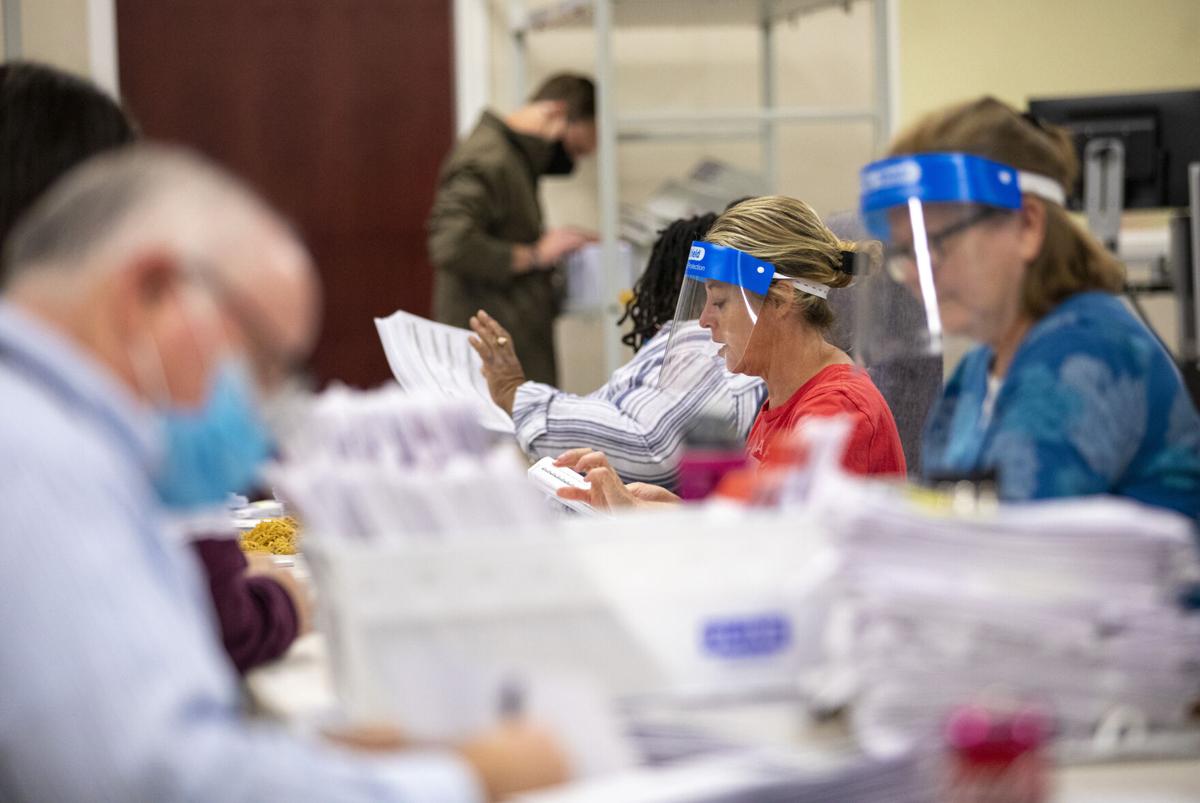 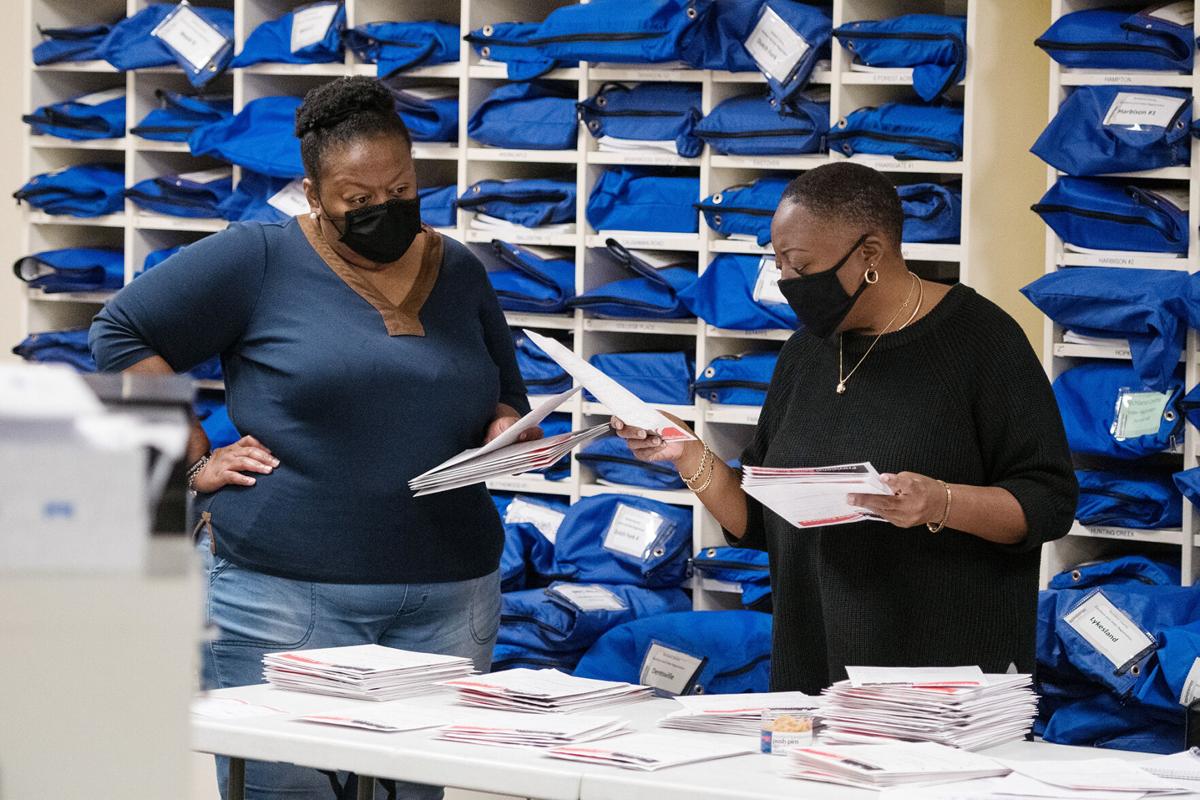 Election workers sort provisional ballot envelopes in the elections office at the Richland County Administration Building in Columbia on Wednesday, Nov. 4, 2020. John A. Carlos II/Special to The Post and Courier 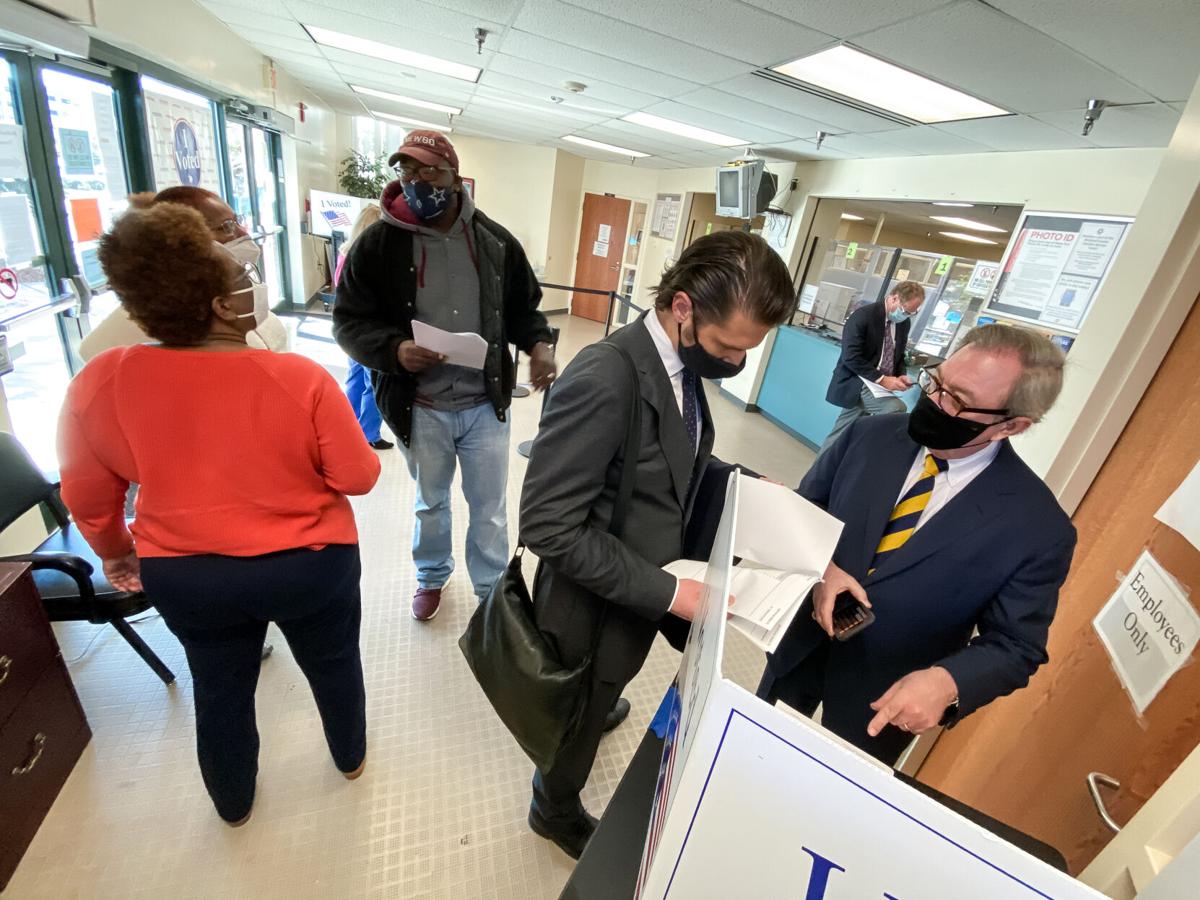 Richard Harpootlian goes over election results after absentee ballots had been counted early Wednesday morning at the Richland County elections office. John A. Carlos II/Special to The Post and Courier 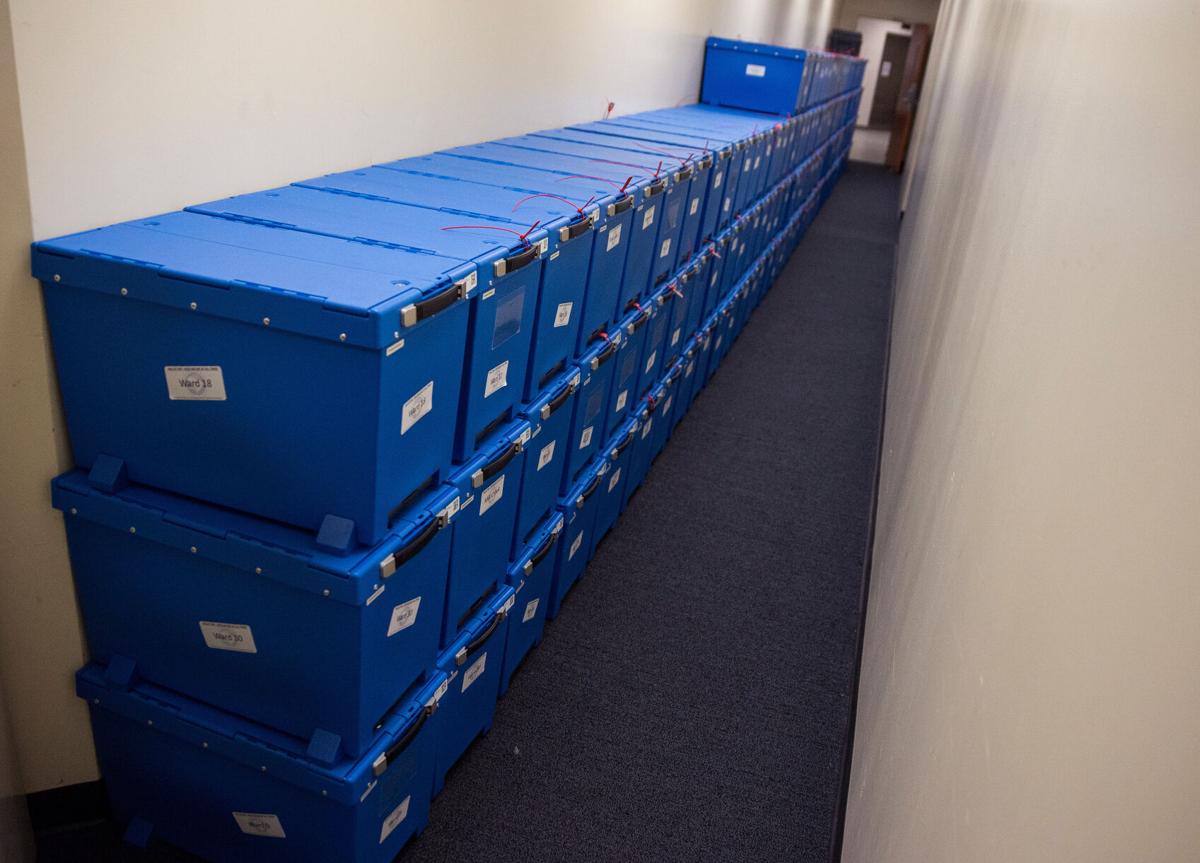 Ballot boxes line a hallway at the Richland County elections office in Columbia on Wednesday, Nov. 4. John A. Carlos II/Special to The Post and Courier 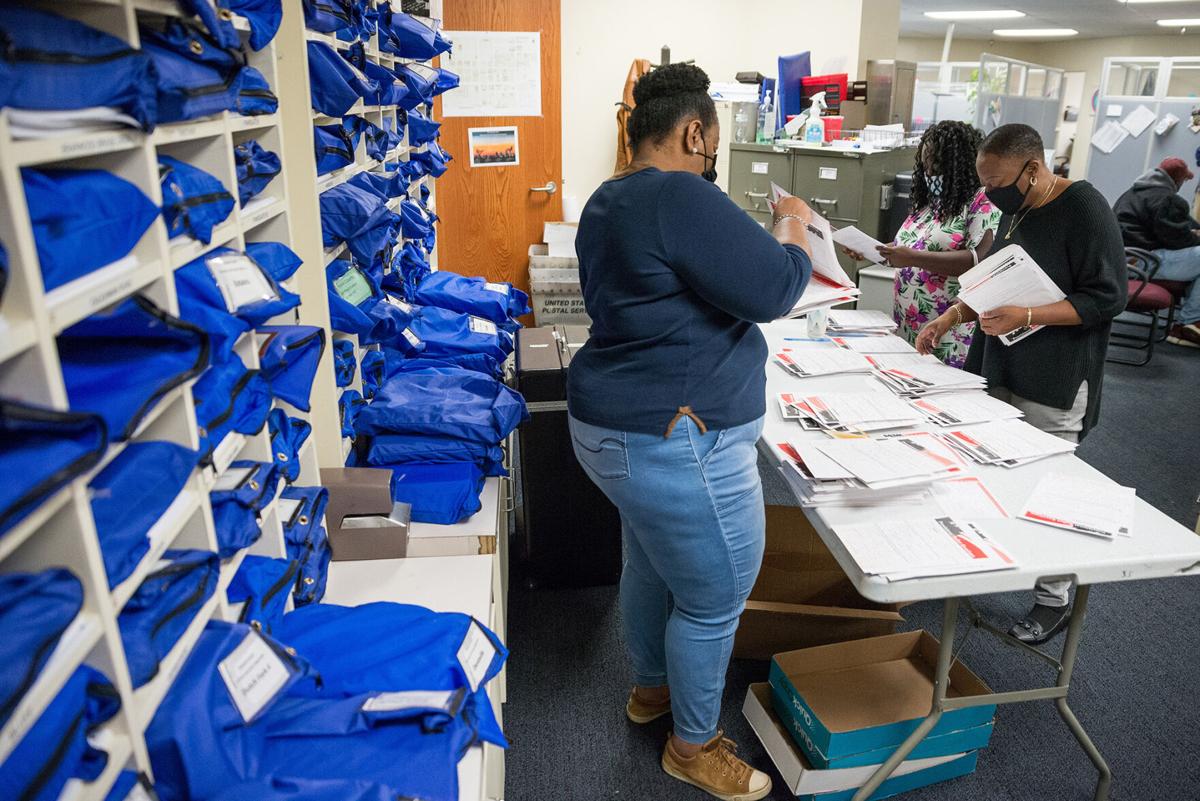 Election workers sort provisional ballot envelopes at the Richland County elections  office in Columbia on Wednesday, Nov. 4. John A. Carlos II/Special to The Post and Courier 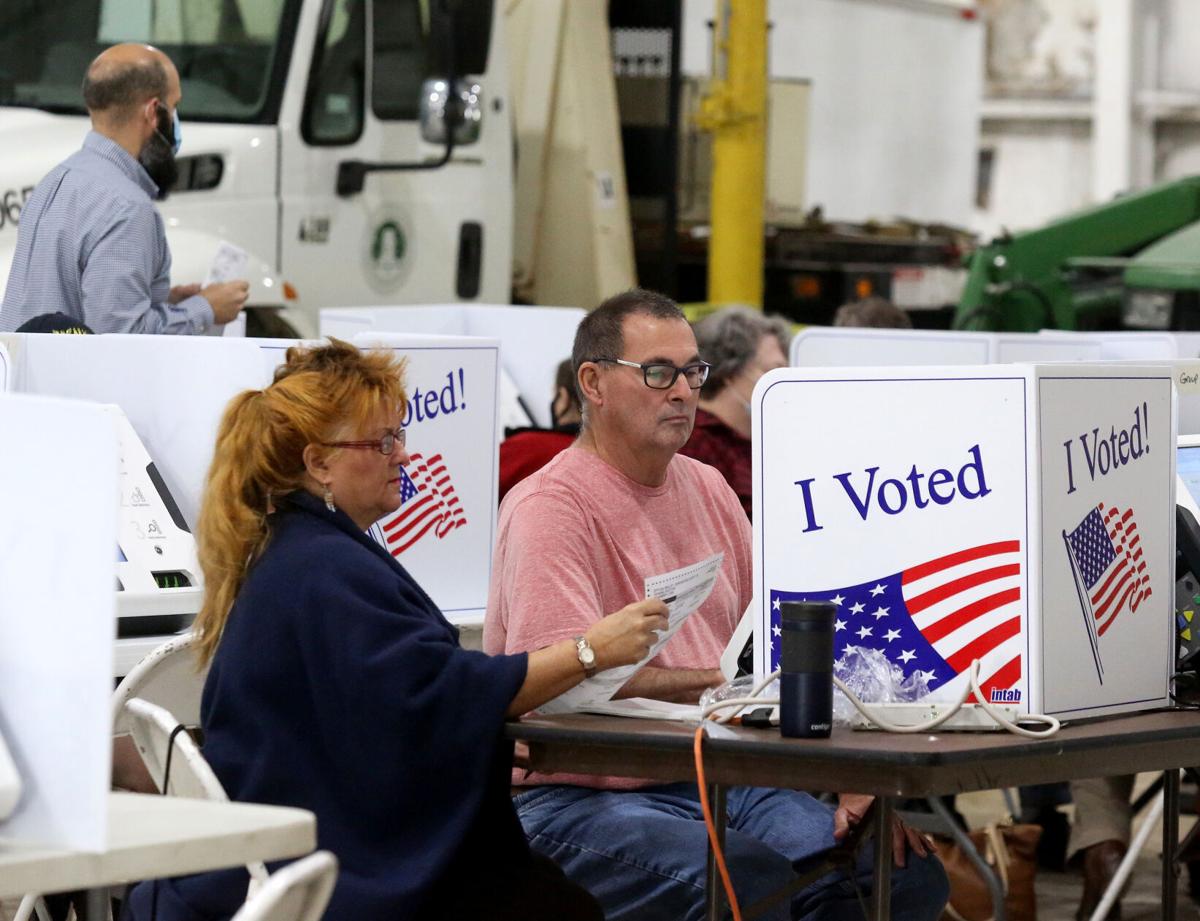 COLUMBIA — The tedious process of tallying mailed absentee ballots, when combined with state rules on opening them and odd glitches in two counties that no one saw coming, extended the vote counting in South Carolina almost two full days past the close of polls.

In a state called for President Donald Trump early on election night, the outcome of many down-ballot races remained unclear well into Wednesday. One close Statehouse race in Columbia appeared too close to call until Thursday morning.

Other than Dorchester and Horry counties, where the tabulating finally wrapped up before sunset Thursday, the explanation comes down to unprecedented voter turnout that not only shattered prior records but, for the first time, saw more South Carolinians vote early than on Election Day.

While absentee voting soared nationwide, the biggest reason for the delay in South Carolina's reporting compared to states that finished earlier — including Florida, which has been notorious for dragging out election results — is the timing on processing mailed ballots.

The two extra hours South Carolina legislators gave this election to start opening ballot envelopes turned out to be only marginally helpful, due to the volume.

In all, 1.33 million people voted absentee in a pandemic election when legislators temporarily changed state law to allow any registered voter to cast a ballot early without needing an excuse, either by person or mail. That's more than the total vote in four of South Carolina's last 10 general elections.

Election officials say that while they expected record numbers, the absentee count was downright staggering.

Processing mailed ballots involves checking for signatures; opening the outer, return envelope; opening the inner envelope and removing the ballot; unfolding and flattening them out to avoid jams; and, finally, running them through a scanner.

For ballots that can't scan for whatever reason, such as being damaged in the mail or the voter sloppily filling in the bubbles, the voter's selections must be transposed to a new ballot that can run through the machine. And that requires several people to ensure the transfer is done properly.

All military overseas ballots, which are returned through a secure electronic system and printed out, go through that several-step process. There were more than 12,000 of those statewide, with the biggest tally — nearly 2,000 — in Charleston County.

Smalls said it took her staff much of Wednesday just to duplicate the 630 military ballots received in Beaufort County.

"Every bit helped," said Chris Whitmire, spokesman for the state Election Commission. Without the change, "we would've been that much further behind.

"But there was just an extraordinary absentee-by-mail volume we never had to deal with before," he said.

The agency used state and federal pandemic aid to provide counties automatic envelope openers and high-speed scanners that can run 75 to 300 ballots per minute, depending on the model. In some of the larger counties, the aid bought a second or third high-speed scanner.

But in Horry County, a malfunction in transferring the absentee ballot data off its two high-speed scanners at 2 a.m. Wednesday ultimately required roughly 18,000 of the county's more than 32,000 mailed ballots to be rescanned.

"We had everything counted. We were totally done, and we couldn’t get the results off the USB sticks," said Horry County elections director Sandy Martin. "The board was all excited. We had all our precincts in by 9:30 (p.m. Tuesday). It was record-breaking, almost, we thought."

After trying unsuccessfully for hours to figure out what was wrong, her staff gave up and went home. Representatives from the manufacturer started rescanning the ballots Thursday morning, she said.

In Dorchester County, a printing error by the contractor meant the scanners couldn't read the ballots — a malfunction never before seen in South Carolina. Even other counties that used the same company this election to print its ballots didn't have that problem.

But it meant all of the county's more than 14,000 mailed ballots had to go through that multistep transfer process onto ballots that could be scanned. County officials didn't know about it until Election Day because of the law barring ballot-opening until then, and a sample ballot from the vendor tested beforehand went through perfectly.

"We’re working with the county and printer to determine exactly how it happened and what needs to be done to make sure it doesn't happen again," Whitmire said.

In Greenville County, a decision not to use high-speed scanners, which meant both scanning and data downloads took more time, helps explain why it didn't finish until nearly sunrise Wednesday.

Otherwise, it was sheer volume that extended the timeline, officials say.

Richland County had two high-speed scanners. Having the highest-speed model, which scans about four times faster, would've helped tremendously, but by the time the county tried to buy one, none were in stock, said its new elections director, Alexandria Stephens, hired from Birmingham, Ala., this summer after a series of missteps caused long lines in the capital county during the June primaries.

"It would’ve saved a lot of hours. We probably would’ve still gone through the night, but we would’ve been done in the early hours" of Wednesday instead of midnight, she said.

Her exhausted workers did take a break, leaving about 4 a.m. Wednesday, but returned within several hours, she said.

When to leave and resume counting is a county decision, but working nonstop until finished is not recommended, Whitmire said.

"You run a risk," he said. "You could say, 'Let's keep working,' but, not just in elections, but in any kind of work, sleep deprivation leads to increased risk of errors, and you don't want to introduce that in the process."

Director Joe Debney attributed that largely to advance planning, training and the ability to hire roughly 200 temporary workers for the election, swelling the normal staff of 17. About 100 people were assigned to open and process absentee ballots.

"You have to plan this long in advance. You cannot be reactive in elections. You have to be proactive, and we made sure we had plenty of people here," he said.

Things that seem minor, such as laying heavy boxes on stacked ballots to flatten them for scanning, can make a big difference, he said.

"We weren't waiting," Debney said. "We were already ready to go."

But in Beaufort County, the extra two hours on Election Day didn't help at all. It was at least 11 a.m. before its workers started opening the absentee ballots, after spending six hours Sunday opening the outer envelopes, Smalls said.

"On election morning, we had to make sure our precincts were up and running," she said. "Those two hours are our crunch time."

In hindsight, she said, it would've helped to have additional people focused solely on opening and processing absentee ballots.

"That is a lesson learned if ever we had to do this again," Smalls said. "But people have to remember, we are not operating in normal situations. The pandemic has put a strain on every aspect of the election process."

The 2020 general election toppled voter records in South Carolina. A look at some key numbers:

• More than 1.33 million people voted early, either by mail or in-person absentee, compared to less than 1.2 million on Election Day.