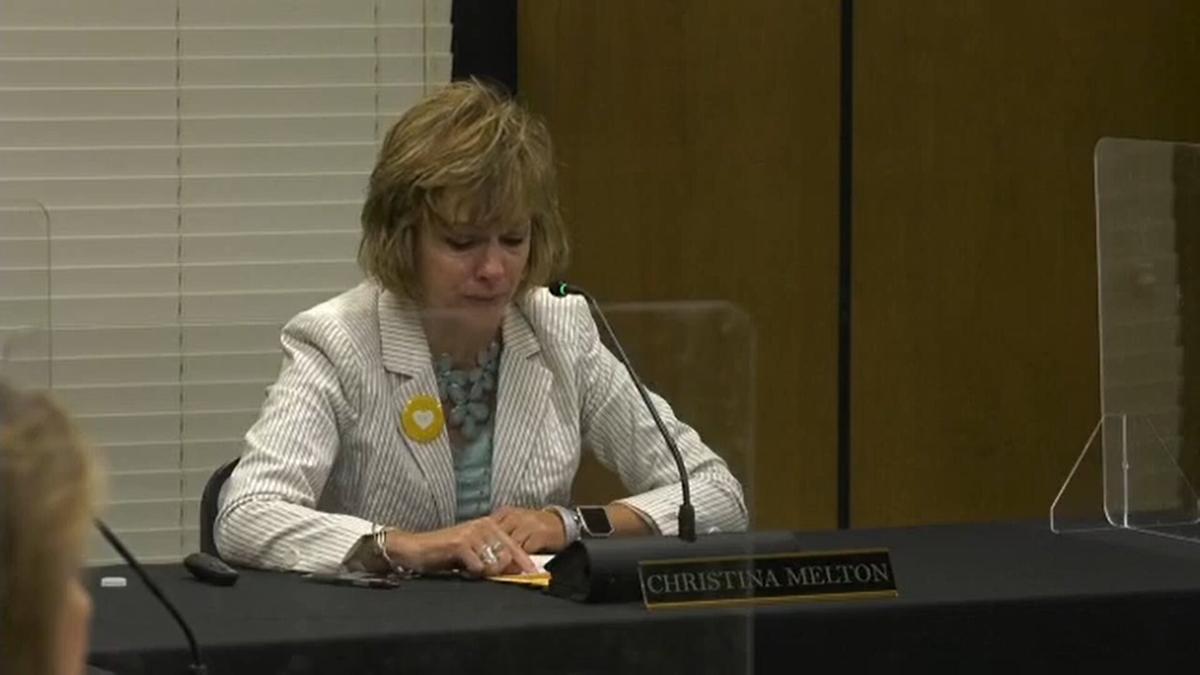 Lexington-Richland Five Superintendent Christina Melton weeps June 14, 2021 at a board meeting where she announced her resignation, effective June 30. Adam Benson/Staff 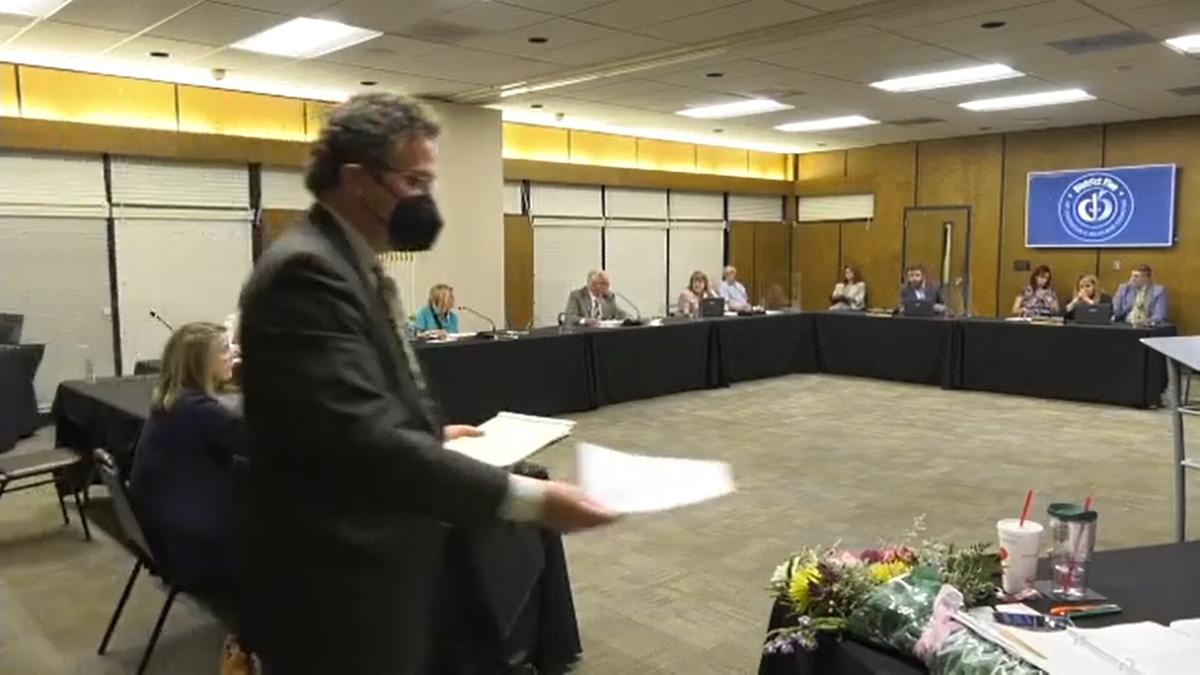 Ed White, an 18-year trustee on the Lexington-Richland Five governing board, submitted his resignation in the middle of a June 14, 2021 meeting where Superintendent Christina Melton also stepped down. Adam Benson/Staff

COLUMBIA — Despite being named the state’s top superintendent just a month ago, Lexington-Richland Five chief Christina Melton was forced to resign by a group of school board members, according to a statement from another school board member.

Lexington-Richland Five trustee Ed White said there was "no basis" for pushing out Melton, who wept while announcing her resignation without stating a reason during a board meeting June 14.

White accused district trustees Nikki Gardner, Catherine Huddle and Ken Loveless of leading the effort to get rid of the state's reigning Superintendent of the Year in a closed session during the meeting.

"I witnessed the hostile and abusive work environment these three created for her that would make it impossible for any Superintendent to succeed," White wrote in a June 15 statement that did not provide details.

White said trustees were asked to sign a secret settlement agreement to terminate her contract and avoid a public vote to fire Melton. Other school board members signed along with Melton, he said.

White, an attorney with the Nelson Mullins law firm, said he refused to sign the agreement that ends her employment on June 30. In protest, White announced his immediate resignation after the board came out of the closed session and left the room mid-meeting without a word from his former colleagues.

The board went back to work for 20 minutes, including discussing a sidewalk easement request in Chapin, before Melton announced her own departure at the end of the meeting.

"They wanted to present the false façade that she had resigned and keep it from the public until after the school year adjourned, ostensibly to avoid the criticism they would receive for their actions," said White, who served on the board for close to two decades. "Ending the employment of the one person that the board has the authority to hire and fire should take place with a public vote that lets the public know what is happening.

"These board members wanted to get rid of the State Superintendent of the Year in secret."

White did not say why other board members want Melton ousted from the district that covers the well-heeled towns of Irmo and Chapin and areas along Lake Murray.

The superintendent had been under fire from newly elected board members over the district's COVID-19 precautions during the past school year, including fighting over resuming in-person classes and ending a mask mandate.

“This message is a bittersweet message to write because of my love for our district," Melton said in a statement issued after her resignation. "This is home. We are family. ‘Know Thy Impact’ is not a mantra, it is a mission at work daily in all operations across our district."

Melton could not be reached for comment June 15. Efforts to reach other Lexington-Richland Five board members were unsuccessful with the exception of Gardner, who said only that board Chairwoman Jan Hammond could speak for trustees.

In a statement, Loveless, the district board's vice chairman, said trustees will hold a special meeting later this week to discuss naming an interim superintendent who would begin working July 1.

Melton, who earns more than $180,000 a year, worked under a board that saw heavy turnover following the 2020 election, where three newcomers were seated included one who defeated the previous board chairman.

Five of the seven district trustees have joined the board since Melton was promoted to district superintendent in 2017.

Melton oversaw one of the most tumultuous years in the history of the 17,000-student district, guiding it through the coronavirus pandemic and a community that split over safety protocols and a gradual return to classroom learning.

When the coronavirus pandemic shut schools down, trustees at first deferred to Melton, but she and her supporters on the board became frequent targets from parents who wanted full-time learning to resume as fast as possible. That didn't happen districtwide until Feb. 1.

Amid student protests, 5-day learning set to start at Lexington-Richland 5

Three district high schools were closed for a day in early December amid mass staff absences a day after trustees failed to vote on a request by Melton to reduce the number of in-person class days as COVID-19 cases rose after the Thanksgiving break.

“Some could easily argue, ‘How does anybody feel safe in a pandemic?’ It is of great importance to me look through the lens of how we are operating for the safety and success of our students and staff,” Melton said in January. “It is clear we have been working toward the expectations of the board.”

On May 4, the board voted 4-2, against Melton's recommendation, to rescind an August 2020 requirement for masks to be worn inside classrooms and other common areas. The district had to reverse itself to avoid clashing with state rules at the time.

Melton, a 27-year educator, came to Lexington-Richland Five in 2007 as the principal of an elementary school. She became the district's director of elementary education and chief instructional officer before she was appointed to its top post five years later.

Irmo Mayor Barry Walker said he expects a phone call from the board chairwoman to explain the reasons behind Melton's departure.

"Our council's working hard to bring Irmo into the 21st century to make this the best place to live in the country, and the way you do that is quality of life and the school system, and we need to maintain that," he said. "What we don't want is the school board to be dysfunctional."

A congratulatory message on Melton's Superintendent of the Year award was still featured prominently on the district's website the day after her resignation announcement. Since the award was revealed in early May, district trustees failed to recognize Melton's honor at two previous board meetings before congratulating her at the start of the meeting on June 14 that ended with her resignation.

“We have been a voice for our children, our community and our profession," Melton said in her resignation statement. "We have been tested and have proven to be resilient and student-centered. I leave this chapter knowing the people in place will continue exemplary work focusing upon our most important resource. Our children."

A district spokeswoman did not know if Melton still planned to address upcoming high school commencement ceremonies this weekend.

Leslie Stiles, who runs a Facebook page that delves into district personalities and policy, said she was saddened but not surprised by Melton’s announcement.

“It has been clear in the past couple of weeks that there was a definite push in some corners of our district to start bringing up negative things,” she said. “Dr. Melton has always been a supreme professional, and she loves kids, she loves families. There is no way that she would have resigned (voluntarily) and upset teachers, families and kids immediately before graduation.”