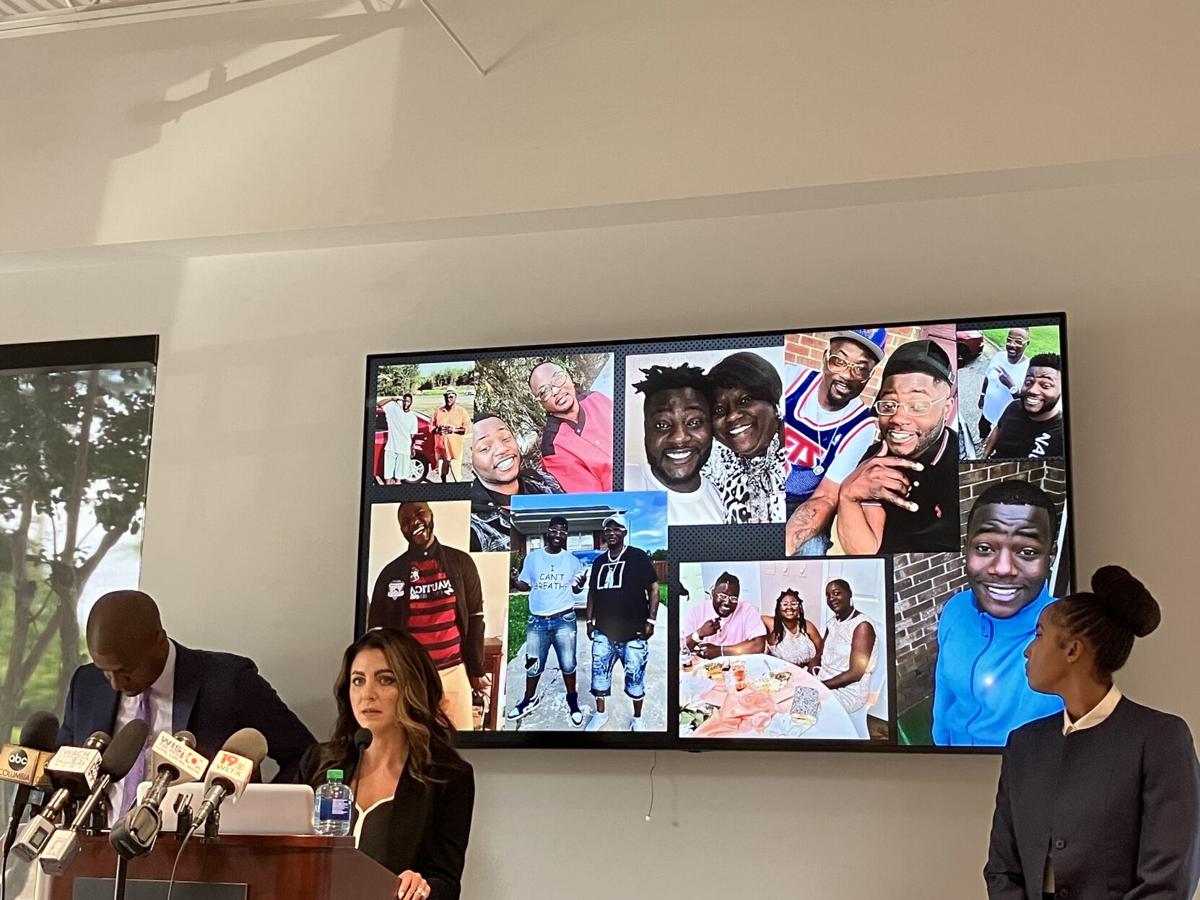 Attorney Alexandra Benevento speaks in front of a collage of photos of Lason Butler, who died at the Alvin S. Glenn Detention Center in February, at an Aug. 3 press conference. 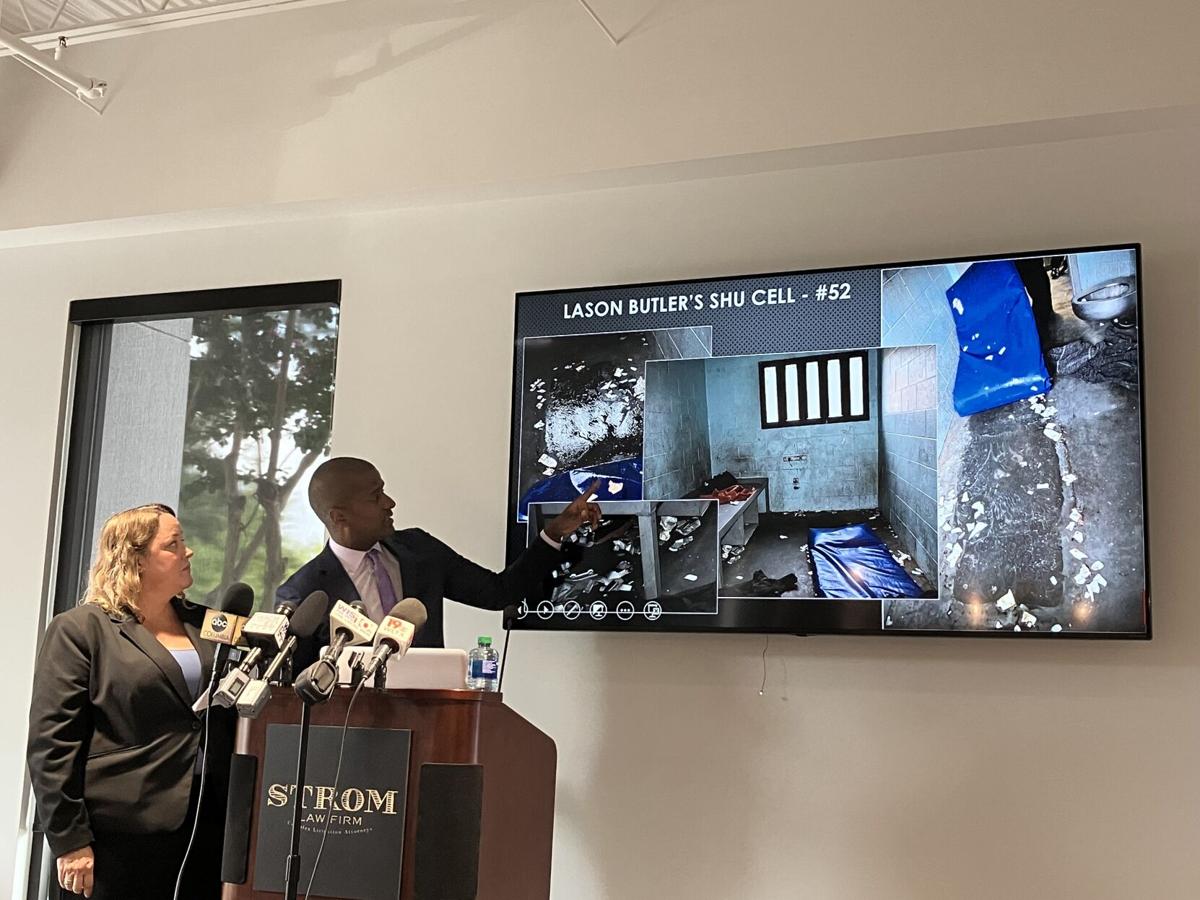 Lason Butler, a 27-year-old from Orangeburg County, was found dead from acute dehydration in his cell at the Alvin S. Glenn Detention Center on Feb. 12. County Coroner Naida Rutherford ruled his death a homicide in April, saying jail staff failed to give Butler adequate foods and liquids or begin routine hydration therapy before his death.

Bakari Sellers, an attorney representing Butler's family along with Audia Jones, said Butler came into the jail experiencing a mental health crisis. He was placed in the special housing unit, where he was put in a dirty cell with rats and no running water, according to the lawsuit.

Sellers called for this section of the jail to be closed.

"The condition of these cells is beyond horrible," Sellers said.

The special section where these inmates stay is laden with mold, pests and standing water, according to the April lawsuit. Detainees are subject to misused restraint chairs, shower stalls used as cells and unsupervised solitary confinement.

Butler was arrested in January on charges of failing to stop for blue lights, reckless driving and driving under suspension. His bond was $1,500.

Butler was placed on suicide watch the day before he died because he was lying on the floor naked and refusing to answer questions, eat or drink, according to the lawsuit.

He came into the jail weighing 257 pounds. By the time of his autopsy less than two weeks later, he weighed 215 pounds, according to the lawsuit.

Security video shows staff carrying Butler between cells on a stretcher and dropping him on the floor, Sellers said.

A detention center nurse said an officer denied her access to Butler's cell when she went to check on him, the lawsuit alleges. He was not sent to the hospital because of staffing shortages at the jail.

"For something as menial as one bottle of water each day for 13 to 15 days, Lason Butler is no longer here with us," Jones said.

An inspection last September found the jail to be overcrowded and understaffed. Officers were required to work overtime, and there weren't enough toilets to meet jail standards.

The conditions in which Butler died amount to unconstitutional conditions of confinement and deliberate indifference to Butler's medical needs, says the lawsuit, which was filed against Richland County and several officers at the jail, including the acting director at the time, Shane Kitchen.

Butler's mother, Lakeshia Butler, said she tried to pay her son's bond but was told she could not because he had a hold from another misdemeanor charge.

"He was a human being. It doesn't matter about what he did," Lakeshia Butler said. "Everybody makes mistakes. That's what he made: a mistake. But he shouldn't have paid with his life."

Richland County did not respond to a request for comment.

The lawsuit is seeking the cost of damages to Lason Butler's family. It does not include a dollar amount because a jury will have to decide the cost of Butler's life, Sellers said.

"We don't know how much a Black man's life is worth," Sellers said, "but we are going to find out."

The jail has been subject to a host of other recent issues as well.

Former long-time jail director Ronaldo Myers resigned after emails showed he was on unapproved leave during a riot at the jail last September.

The county hired his replacement, Tyrell Cato, on July 2. At the time, the county did not know Cato had been fired from his last job in Kershaw County after asking female employees for sex and making suggestive comments about their clothing.

County Administrator Leonardo Brown has not responded to questions about whether Cato is still employed at the detention center. A woman answering the phone on Aug. 2 said he was in a meeting.

Skylar Laird covers Columbia and Richland County for The Post and Courier. She is originally from Missouri.