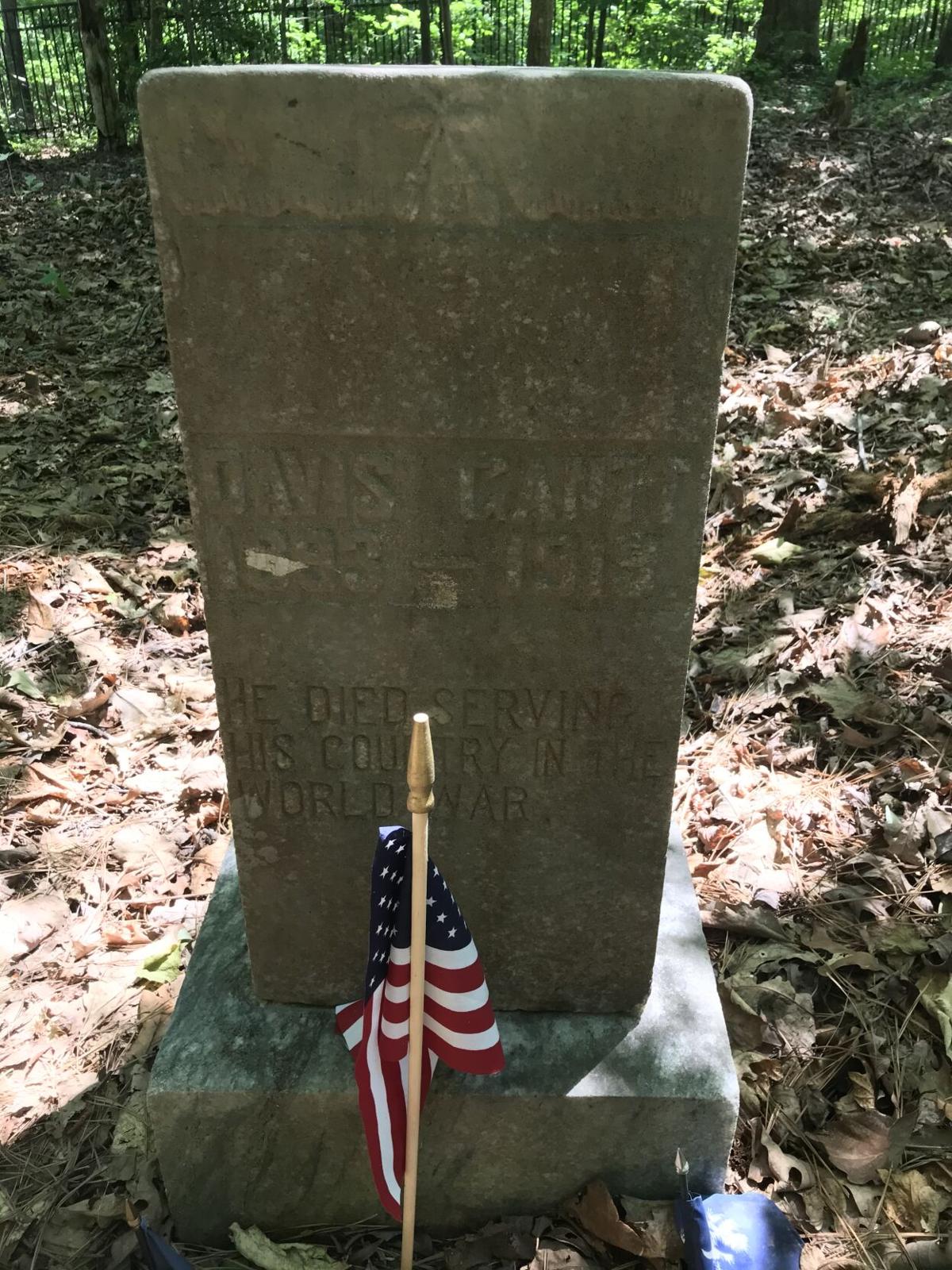 The gravestone of Lexington native and World War I Purple Heart recipient Davis Gantt is located in a cemetery on the grounds of River Bluff High School. Adam Benson/Staff

River Bluff High School junior Rachel Loging, 17, talks about her participation in the restoration of a historic Black graveyard on the Lexington school's campus during a June 8, 2021, press conference. Adam Benson/Staff 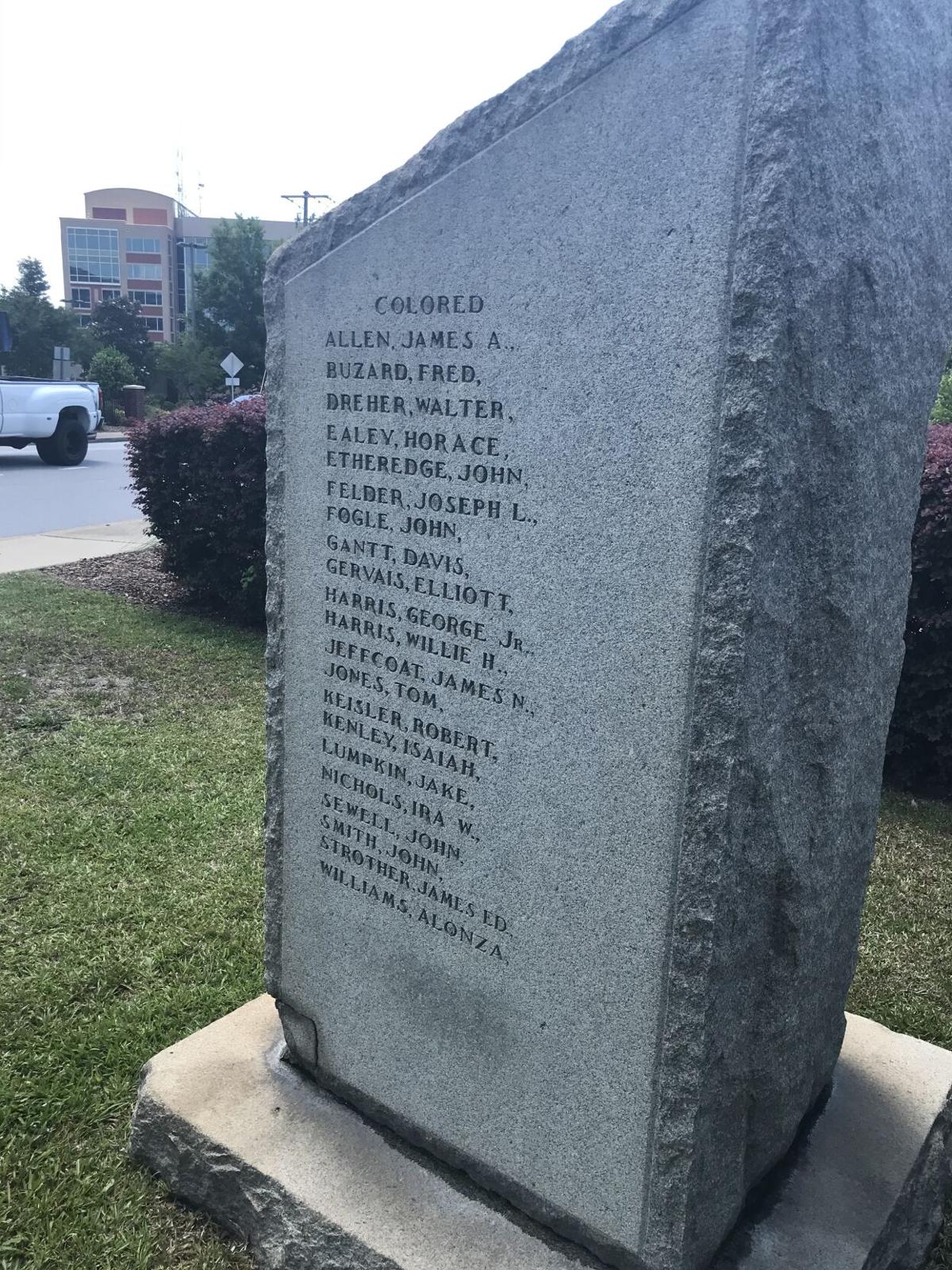 The name of Davis Gantt, a World War I Purple Heart recipient who died of complications from pneumonia following a battlefield chest wound in 1918, is etched on a marker at the Lexington Courthouse grounds, which separates names of soldiers by their race. Adam Benson/Staff

LEXINGTON — On a humid South Carolina morning, raindrops fell on the limestone grave of Davis Gantt just like it has many times since his burial in 1919.

But on June 8, there was actually a crowd to bear witness.

The marker, located in a once overgrown and inaccessible cemetery on the grounds of River Bluff High School in Lexington, is the most distinctive in a graveyard previously attached to the Mount Zion AME Church, where Gantt attended before joining the U.S. Army during World War I.

He won a Purple Heart and died of complications from pneumonia after being shot in the chest by German forces during the 1918 Meuse-Argonne offensive.

A sign was unveiled June 8 identifying the site’s location in a ceremony that officials hope will be the first of several to chart the area’s Black history.

“Today is a beginning in terms of our commitment at River Bluff to open our campus up to the community to tell history,” River Bluff history teacher Michael Burgess said. “To tell history, and to tell history in a way that is meaningful, it is important that it is told fairly, fully and truthfully, or else you have a limited understanding of your past and no explanation of who you are at present.”

Since 2014, more than 2,000 River Bluff High School students have taken a tour of the grounds, which are steeped in history. Every sophomore class does it, walking a circuit carved by Burgess and other volunteers.

The land was originally part of a vast plantation owned by Samuel Lorick, who got rich operating a lumber mill and ferry service across the Saluda River. By 1860, he had 53 slaves; five years later, when the left flank of Gen. William Sherman’s Union Army cut across the property, it’s thought that some marched with them, newly emancipated.

Many of their descendants are believed to be buried in unmarked graves tucked into a wooded area on the high school campus. Indentations are easily visible along slopes, and pieces of porcelain, cookware and other artifacts buried alongside the dead have also been recovered and displayed by Burgess and his students.

Burgess uses the grounds as a teaching tool for west African burial traditions. He also talks about Reconstruction and the Jim Crow era.

Revealing the identity of Gantt’s resting place and the unnamed parishioners who lay around him is part of the latest reclamation effort under way in this county, where a group is working to provide an honest account of its history.

Burgess is helping to lead an initiative aimed at memorializing Willie Leaphart, whose 1890 shooting death at the hands of a mob became the county’s first of 10 recorded lynching victims through 1921.

Burgess is part of a group called the Lexington County Community Remembrance Project, which is applying to the Alabama-based Equal Justice Initiative for resources to commemorate those victims of extrajudicial killings.

A Black teen was lynched in Lexington in 1890. A teacher now wants to keep his story alive.

“We are unsure that many residents understand the connection between history and present. Economic growth and development have overshadowed a commitment to preserving and sharing black history within the County. This history has been overlooked. This was accepted as a means to make it easier to build subdivisions and new businesses without confronting the realities of the past,” the application states.

The Mount Zion graveyard beautification is a smaller part of that plan.

River Bluff junior Rachel Loging has been involved in its restoration since March, and called it one of the most unique and rewarding academic experiences of her life.

“It’s incredibly important to me. You learn about it, and you see Davis Gantt, and you see all the unmarked graves, and it just really makes you think that history is a reality,” the 17-year-old said. “I'm never going to come close to what he did for our country, but I would like to see I'm trying to do the best I can to preserve his memory.”

Gantt, born three years after Leaphart was murdered, enlisted in the Army, heeding President Woodrow Wilson’s call to arms. Assigned to the 371st Infantry Regiment, the troops were handed over to French officials when they arrived overseas due to the U.S. military’s segregationist policies.

Charging up a hill, he sustained a chest wound in the summer of 1918. He was shipped back home following the battle. A year later, Gantt was dead of pneumonia but was considered killed in action because he illness was connected to his injury. He was buried under the nondescript marker in Lexington.

“You have this story of a lynching and you have this story of a young man like him who believed if they go fight courageously, demonstrate bravery, that their country will respect them as equally,” Burgess said. “One gets lynched and the other dies fighting for his country. When you add this story to that story, it just blows your mind.”