COLUMBIA — Three days after Christina Melton’s abrupt June 14 resignation as Lexington-Richland Five superintendent, trustees broke their silence, hitting back against claims the process was done in secret and blaming critics for overshadowing the pending graduation ceremonies for hundreds of students.

“It is disappointing to the Board that this news was shared in this careless way and without consideration of the District’s staff and students as we near the end of the 2020-21 school year and prepare to celebrate our graduates and end-of-the-year achievements,” a lengthy statement on behalf of the board and issued June 17 through the district states.

“The public display of contempt and disdain for the situation stripped Dr. Melton of the ability to address her staff, students, and the community about her plans and completely undermined her authority to share her future in the manner that she deserved during this transitional period for our District.”

The remarks, which are not signed by board members, come two days after trustee Ed White accused his colleagues of orchestrating Melton’s departure and attempting to quash the news until after commencement ceremonies. No reason was given for Melton quitting. She had been clashing with some trustees and parents over district COVID-19 precautions that limited in-person classes and required wearing masks.

It remains unclear whether Melton, who was named superintendent in 2017 and named the state's Superintendent of the Year in May, will speak at a series of weekend graduations, which start at 8 a.m. June 18 at Irmo High School.

SC's reigning Superintendent of the Year was forced to quit, Lex-Rich 5 board member says

White, first elected to the board in 2002, resigned in protest about 20 minutes before Melton emotionally said she’d be stepping down effective June 30. He said he refused to sign what he called a secret settlement passed out to trustees during a June 14 executive session. He said Melton and other trustees signed the agreement as a way to get around their efforts to fire Melton.

“The agreement disclosed by Mr. White was not effective and will not become a permanent, binding document until June 22, 2021, because of certain provisions afforded to both parties,"  board members wrote. "Indeed, as of the release of this statement, that agreement is not final. On that date, and no sooner, it will cease to remain a negotiable contract exempt from disclosure under FOIA and will become permanent and available to the public.

“That fact is well understood by the Board and Dr. Melton, and, had both Dr. Melton and the Board been provided with the opportunity to handle the announcement of her resignation accordingly, the public would have been made aware of the agreement, its contents, and Dr. Melton’s wishes simultaneously.”

The board's nearly 1,000-word statement did not address White's assertion that Melton resigned under pressure from a group of trustees who wanted to fire her.

Full statement from Lexington-Richland Five board on Melton resignation

But the newspaper obtained Melton’s latest contract through a public records request.

Under a termination clause in the contract, the board agrees to pay a terminated superintendent the equivalent of 12 months’ salary or the balance of his or her contract. Since Melton resigned, a separation package is being crafted. 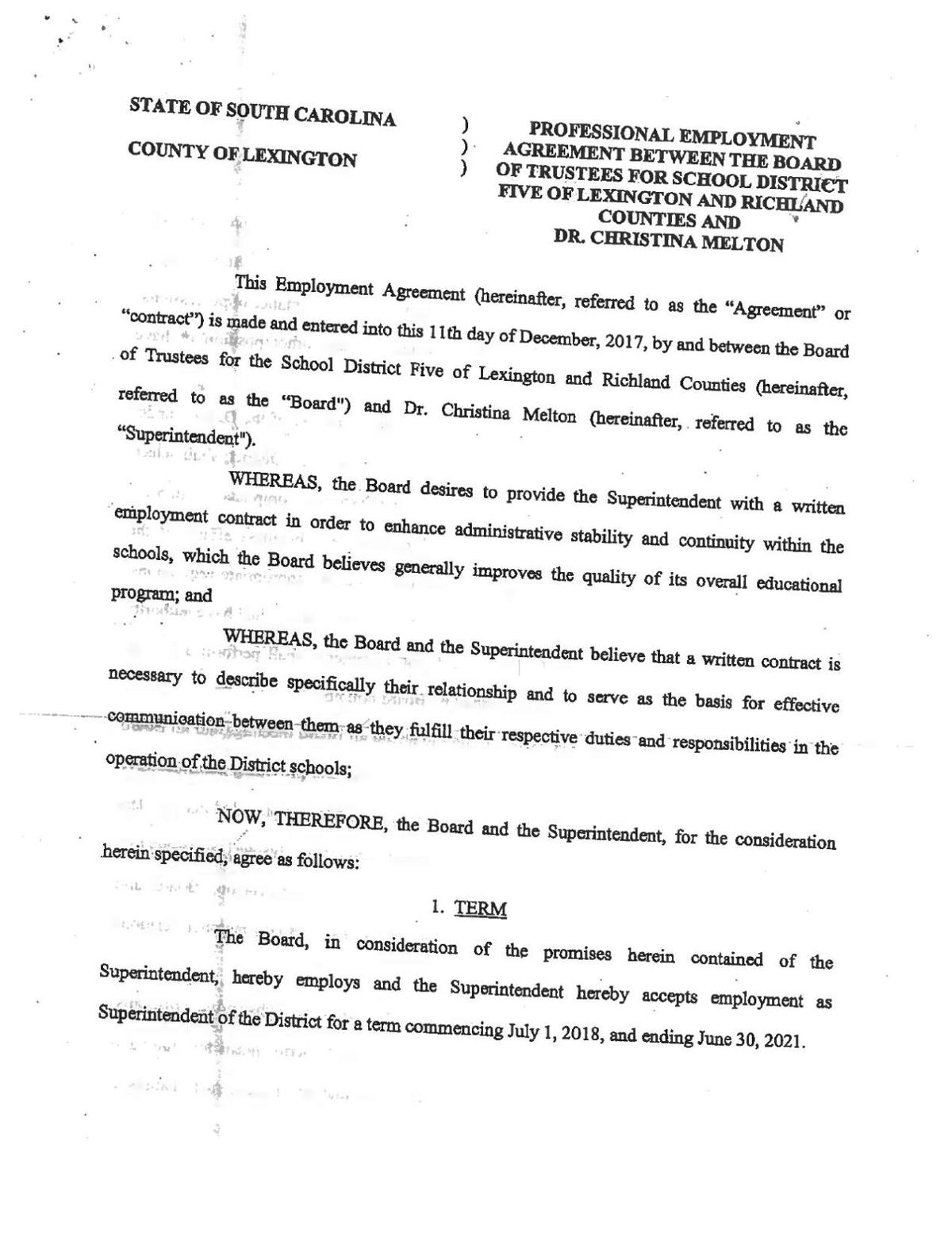 Melton’s base salary was $175,000 a year. The three-year contract was scheduled to end June 30, though she was assumed to have another year if the board did not tell her by Feb. 1 that it planned not to extend her agreement.

Meanwhile, trustees will meet at 5:30 p.m. on June 22 at a special meeting to discuss appointment of an interim superintendent, expected to begin work July 1.