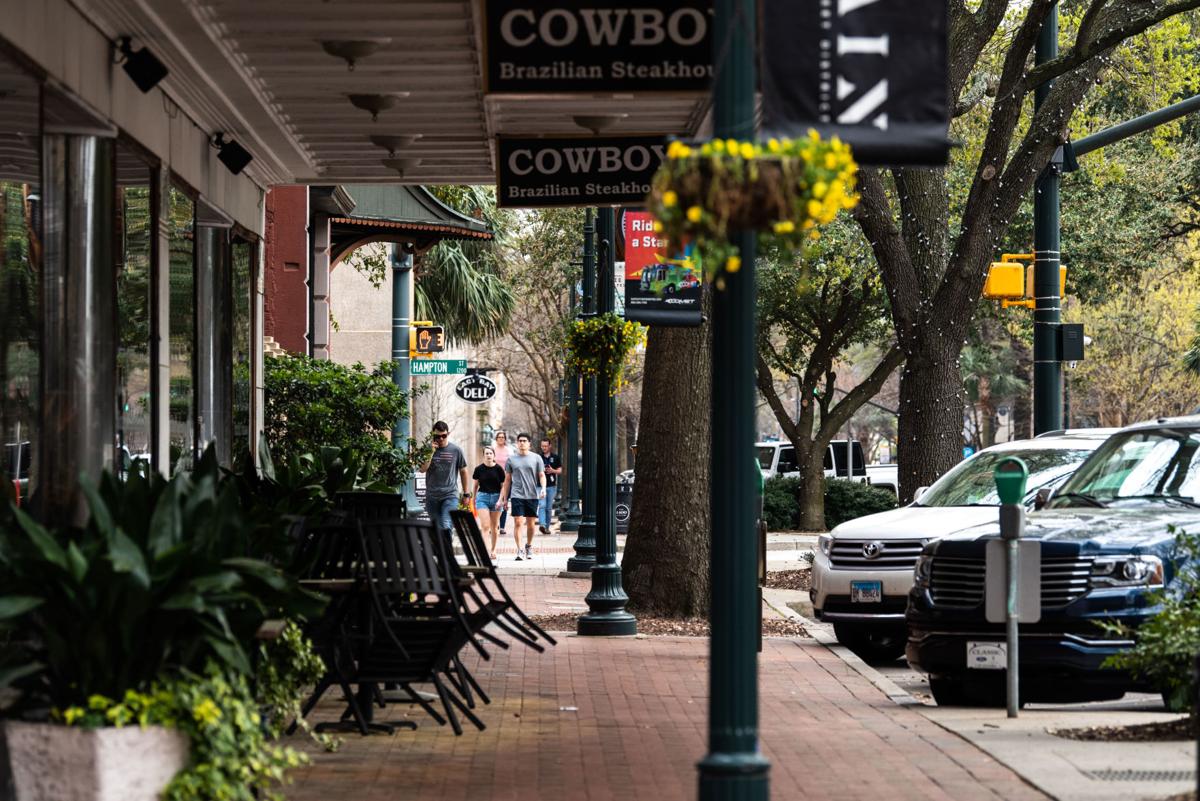 Columbia's Main Street during the era of COVID-19. Provided 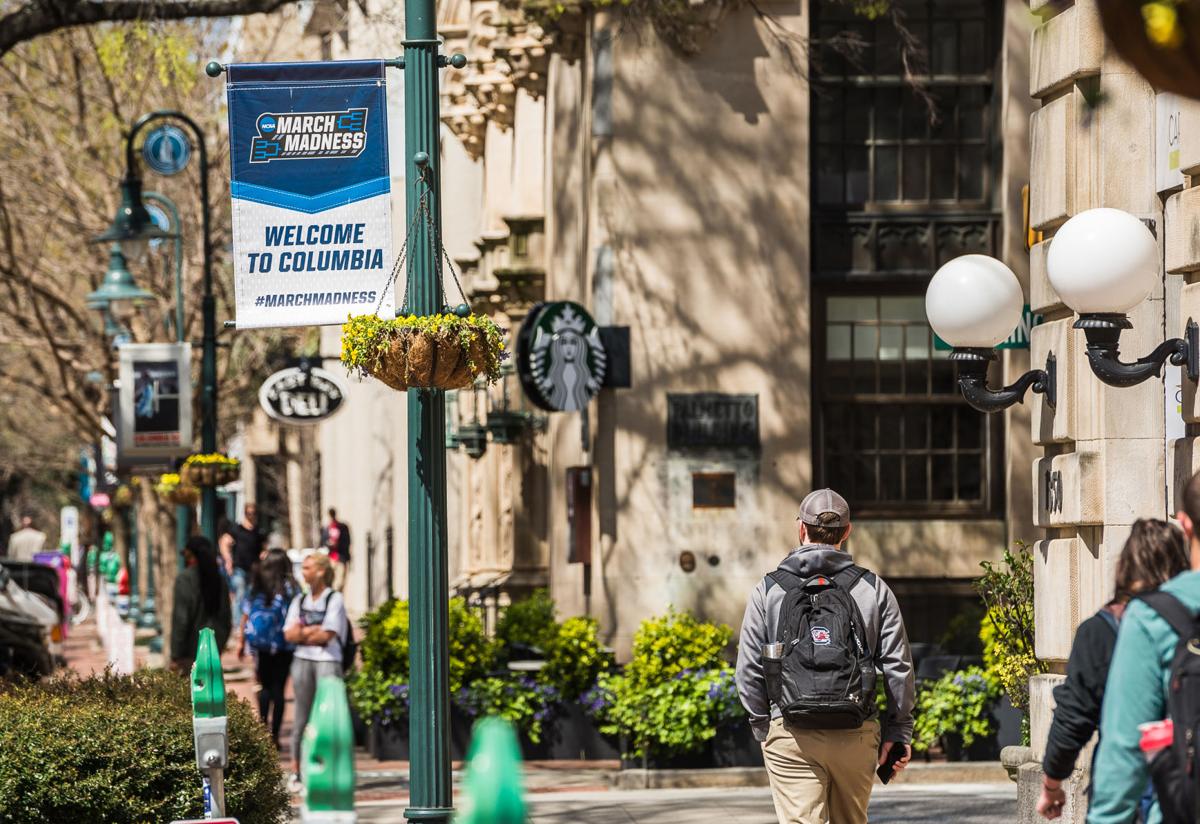 Banners on Main Street mark March Madness events in Columbia. File/John A. Carlos II/Special to The Post and Courier

COLUMBIA — South Carolina’s capital city is being taxed to death, a study commissioned by Columbia City Council has found.

The city-commissioned report, authored by a former chief economist at the S.C. Department of Commerce, found the Columbia area’s historically high combined tax rates are nearly double that of Charleston and 1.5 times higher than Greenville.

“(High taxes) are causing a crisis of disinvestment, which can be seen in declining population, slow income and job growth, and depressed asset valuation,” the report said.

But the proposed solution — a multistep approach of cutting property taxes, limiting government spending and rewriting a state tax code that artificially depresses home values — will be difficult to pull off.

The findings of the study, authorized by the city last year and presented to City Council last month, are stark.

They strike at the heart of a years-long debate about what's holding back the Columbia metropolitan area’s growth and how local leaders should unleash the South Carolina's second-largest city’s potential as a nexus of business, government, the military and higher education.

The $25,000 report found Columbia has been largely left behind as South Carolina’s economy has grown faster than all but seven other states over the past decade. It determined:

The author, Rebecca Gunnlaugsson, an economist who specializes in public finance and taxation, blames a cycle in which high combined property tax rates from the city, Richland County and two major school districts have discouraged businesses from investing here and depressed property values, creating funding shortfalls that lead to even more tax hikes.

She called for a multi-pronged solution that requires the cooperation of city, county and school district leaders. But those groups must somehow agree on a plan that would raise taxes for some people, lower them for others and require serious spending cuts by government and schools.

“It is a complicated subject,” said City Councilman Howard Duvall, “and it’s going to be like the third rail to try to change some of it because some taxpayers are going to have to pay more taxes.”

Gunnlaugsson’s study provides ammunition to fiscal conservatives who have long argued the area’s high taxes are driving away new businesses and growth.

Columbia City Councilman Daniel Rickenmann, who pushed for the study, urged his colleagues to view the findings as a tool, not a criticism of prior decisions.

“This is a third party validating that we are at a disadvantage,” he said.

But other council members were quick to note the area’s property tax growth over the past decade hasn’t come from the city.

The city’s property tax rate has actually decreased 4.4 percent since 2010.

But over that same span, Richland County’s millage rate has risen by nearly 24 percent, an increase County Council Chairman Paul Livingston attributes to pay raises for county employees, upgrades in public safety and unfunded mandates from the state Legislature.

Richland One School District has raised taxes by 15 percent in the past decade, and Richland Two has raised its millage rate by nearly 27 percent. Both districts are among the 10 largest in the state with more than 50,000 students combined. 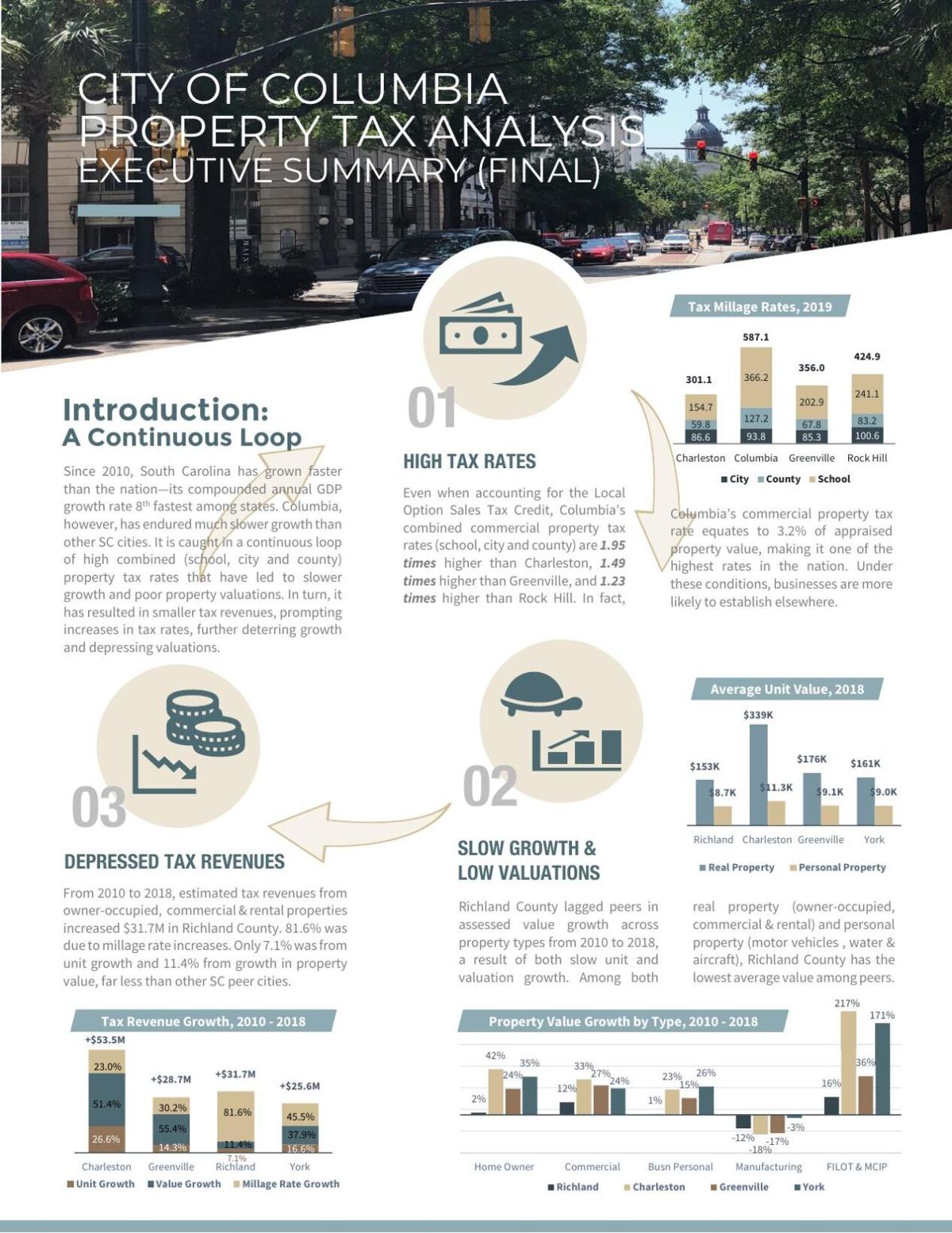 “It points out dramatically that the high taxes in Richland County are not caused by municipal government,” Duvall said.

But Columbia's tax rate is still higher than Greenville and Charleston, and the city's reliance on other types of fees, including from business licensing and permits, has discouraged businesses from settling in the S.C. capital, Gunnlaugsson wrote.

The study also pokes holes in a long-held assumption that Columbia's tax rates must be high because so much of the city is tax-exempt, forcing other properties to make up the difference. That's not the only factor, Gunnlaugsson wrote.

The city is home to more than 3,500 tax-exempt pieces of land, many of them owned by the University of South Carolina, local government, state agencies and churches. About 7.8 percent of Columbia's parcels are fully tax exempt, compared to 7.2 percent of Greenville's and 6.8 percent of Rock Hill's.

But some of those tax-exempt entities are huge economic drivers that pay for themselves, including the Prisma Health hospital system, Columbia’s largest employer, Gunnlaugsson found.

“The presence of tax-exempt entities is not necessarily a detriment to the tax revenues of the City, much less its economy,” she wrote.

Gunnlaugsson pointed to other factors driving the problem.

She noted the state’s tax law, Act 388, has artificially depressed local tax revenues by capping at 15 percent how much a home can rise in taxable value over four years.

And Richland County’s school districts, which are largely driving the high taxes, tax and spend more money per pupil that nearly every other district in the state, the study found.

Notably, both spend far more than other districts on school and district administration. Richland One spends $1,010 per pupil, while Richland Two spends $928 per pupil. The state average is $684.

Gunnlaugsson suggested the city, county and school districts create a five-year plan to lower taxes across the board and conduct an efficiency study to see where they can save taxpayer money by merging to deliver government services without duplication.

Local governments would need to cut their taxes by 18 percent to be on par with Rock Hill, by 33 percent to catch up with Greenville and by 48 percent to break even with Charleston, she wrote.

She proposed ditching the city and county’s practice of offering selective tax breaks to major businesses and industries, such as student housing projects, arguing those plans “drive greater imbalance in tax rates between a few select properties and all others, while not delivering on the promise of new jobs, rising wages, and more future development.”

Gunnlaugsson also suggested local officials lobby state lawmakers to either repeal all of Act 388 or the piece of it that artificially caps taxable home values and limits government revenues.

Finally, the study proposes streamlining licensing and zoning practices to make it easier for businesses to invest.

“I think Columbia is a wonderful place to raise a family,” Taylor said. “But today, it’s just not a very good place to make an investment.”

Some of the fixes would be unpopular politically.

During Gunnlaugsson’s presentation last month, she acknowledged one of proposal — repealing part of Act 388 — would actually raise taxes for longtime homeowners who currently benefit from the state’s tax structure, while giving the government enough cash to cut taxes elsewhere.

“I’m going to put you and Howard (Duvall) in charge of calling them, OK?” Benjamin joked.

Benjamin did not respond to requests for an interview for this story.

Livingston, Richland County Council’s chairman, said he would be willing to study the issue further in cooperation with other local leaders.

Richland One School District Chairman Jamie Devine asked that a reporter submit questions for this story in writing, and then did not respond to those emailed questions.

Richland Two will have trouble making cuts when it is already under stress to educate a student body that has grown 15 percent over the past decade, he said. As the district in northeast Richland County has become more suburban, it has missed out on the kind of commercial activity that drives school funding in South Carolina.

The district has also had to replace and repair aging facilities, upgrade school security, meet demands for higher teacher pay, provide school psychologists and counselors and meet state requirements that legislators have not funded.

“I have a primary responsibility to make sure we have the resources to, for the most part, pay our teachers,” Manning said. “Over 90 percent of our budget is salaries for staff.”

Rickenmann envisions creating a task force to address the issue after the holidays, filling it with representatives from the city, county and school districts as well as local businesses and USC.

He acknowledged the extent and complexity of the problem will require a some soul searching.