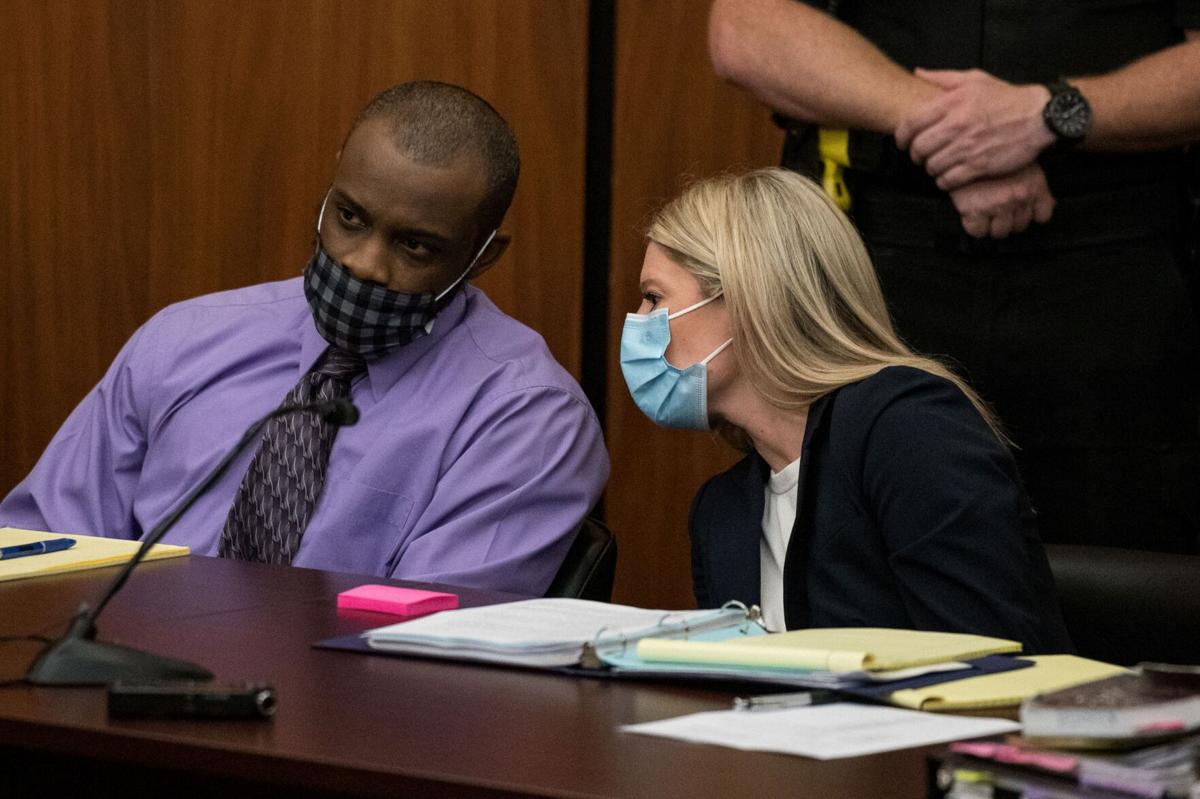 Nathaniel Rowland (left) speaks with attorney Alicia Goode July 20 in Richland County court. Rowland is being tried in the murder of University of South Carolina senior Samantha Josephson, who got into a car she thought was her Uber in 2019 in Columbia's Five Points. John A. Carlos II/Special to The Post and Courier 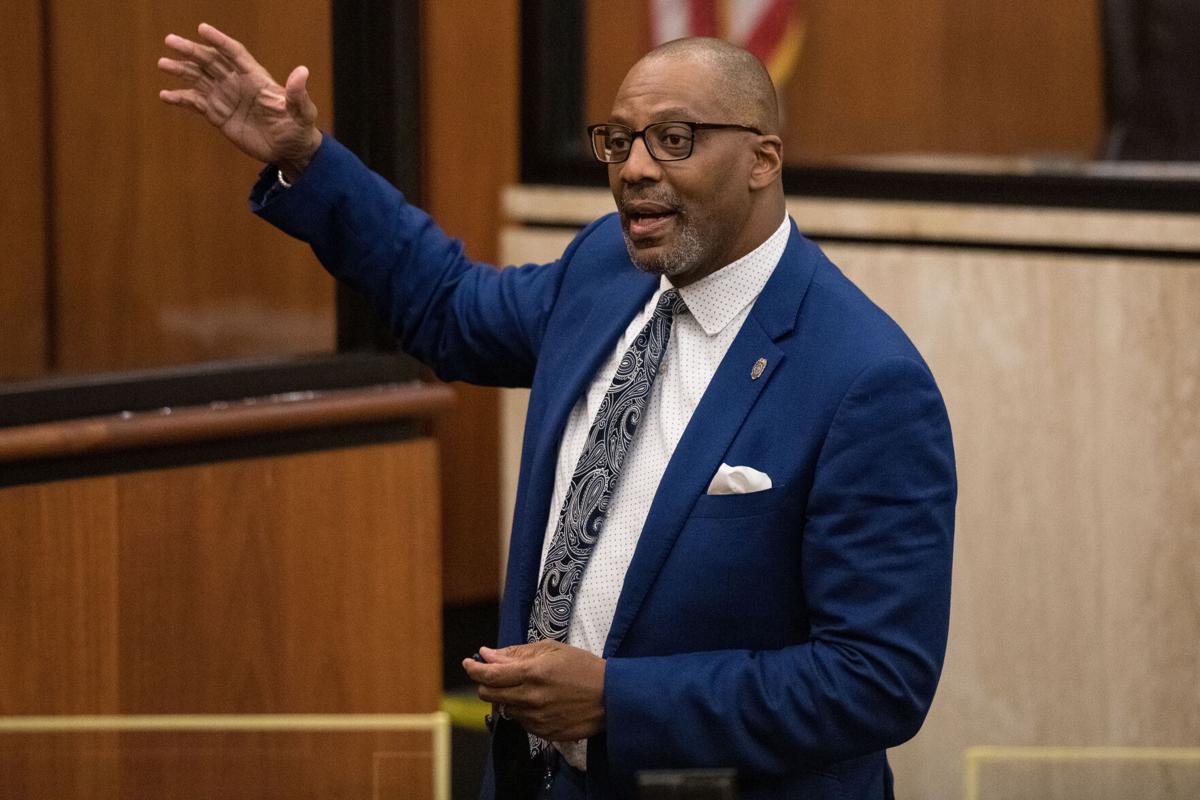 Prosecutor Byron Gipson tells a Richland County court room on Tuesday, July 20, that Samantha Josephson was stabbed more than 100 times. John A. Carlos II / Special to The Post and Courier

Nathaniel Rowland (left) speaks with attorney Alicia Goode July 20 in Richland County court. Rowland is being tried in the murder of University of South Carolina senior Samantha Josephson, who got into a car she thought was her Uber in 2019 in Columbia's Five Points. John A. Carlos II/Special to The Post and Courier

Prosecutor Byron Gipson tells a Richland County court room on Tuesday, July 20, that Samantha Josephson was stabbed more than 100 times. John A. Carlos II / Special to The Post and Courier

COLUMBIA — A former girlfriend of the man accused of killing Samantha Josephson testified that she saw blood in his car and him cleaning a hunting knife in the hours after the University of South Carolina senior disappeared from in front of a Five Points bar.

On the second day of Nathaniel Rowland's trial on murder and kidnapping charges, Maria Howard, who says she was dating Rowland at the time, said she quizzed the Clarendon County man about blood she saw in the back seat and dashboard, and a sheet draped over the seat.

Howard said blood even got on her child's shoes after she drove Rowland's car to take her daughter to the doctor. She jokingly asked Rowland if he had hit a dog with his car and placed it in his back seat.

Rowland would not answer her questions about the blood's origins, telling her repeatedly it was none her business.

The testimony in the Richland County courtroom was the most pointed yet related to what prosecutors allege, that Rowland kidnapped Josephson from the Columbia nightlife district and stabbed her numerous times before dumping her body in his home community of New Zion, about 65 miles east of Columbia.

On the first full day of testimony July 21, prosecutors called witnesses who laid out the events from Josephson's body being found to him being chased down and arrested in a downtown Columbia neighborhood 24 hours after Josephson was taken. A State Law Enforcement Division investigator talked about going through the car Rowland was driving section by section and finding what appeared to be blood throughout, bleach bottles and a strong chemical smell.

Howard said Rowland was using bleach to clean the car and saw him cleaning a knife at one point.

Howard said Rowland arrived late to pick her up for work the morning after Josephson's kidnapping. Her McDonald's work visor, which had been in Rowland's back window, was missing.

When Howard asked Rowland about the hat, he told her he had gotten rid of it because it had blood on it, Howard testified. After Howard pressed, she said, Rowland told her to mind her business.

Rowland took her to work at McDonald's, where she arrived late. Howard said she got another ride home from work that night and that Rowland's car was in the driveway when she arrived and that he appeared "shook" when she banged on the door for him to let her in because she didn't have her key.

When Rowland's attorneys asked about Howard's statement that she didn't help her then-boyfriend clean the car and whether her DNA might turn up on cleaning supplies, Howard replied that of course her DNA would be on the supplies because Rowland was using her products.

Howard told prosecutors she had gone to sleep in her bed the night Josephson disappeared and Rowland on her couch. Under cross examination by Rowland's attorneys, Howard said Rowland was in her bed when she fell asleep and gone when she woke up in the morning.

Jurors also saw video of Rowland running from police during a traffic stop not far from where Josephson disappeared less than a day earlier. They also heard from the turkey hunter and state natural resources officer who found and stayed with Josephson's body in rural Clarendon County.

The SLED investigator told the court about finding the child-safety lock engaged in Rowland's vehicle, with agents getting in the car to test that the door in fact couldn't open from the inside with the child lock engaged. The investigator said a McDonald's visor with what appeared to be blood on it was found in the trunk.

Dash camera and body cam footage showed Columbia Police stopping a black Chevrolet Impala matching the description of one Josephson was seen entering. Josephson's body had been found in the woods off of a dirt road in Rowland's home community of New Zion in Clarendon County earlier in the day, and police were on the lookout for a car matching the description of the one seen on surveillance video.

Columbia Police officer Jeffrey Kraft testified that he saw an Impala fitting the description driving on Harden Street toward Five Points. The car, driven by Rowland, turned onto Blossom Street and then up Saluda Avenue heading the wrong way before stopping along the curb.

Kraft testified that he smelled marijuana coming from the car and asked Rowland who had been smoking. Rowland admitted to smoking marijuana earlier in the day, and the officer asked him to get out of the car.

Kraft's body camera then captured what happened next.

"Get your hand out of your pocket, what are you, crazy?" Kraft could be heard saying on the video.

Rowland then runs away. Kraft, a K-9 officer, can be heard threatening to release his dog. Other responding officers caught and handcuffed Rowland a couple of blocks away.

Rowland told officers he had the flu and was having trouble breathing, an officer testified. He was breathing heavily from running and officers sat him up on the curb and called paramedics to check him out.