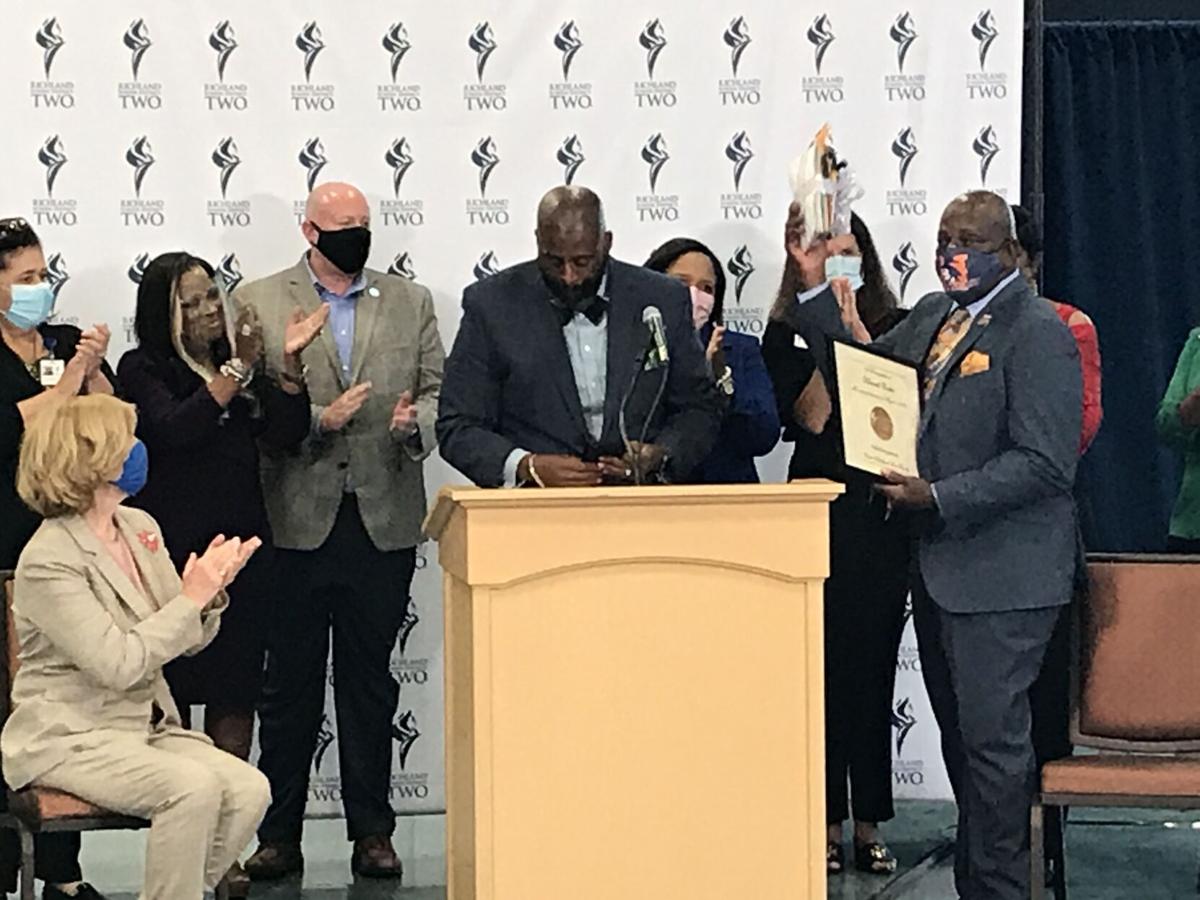 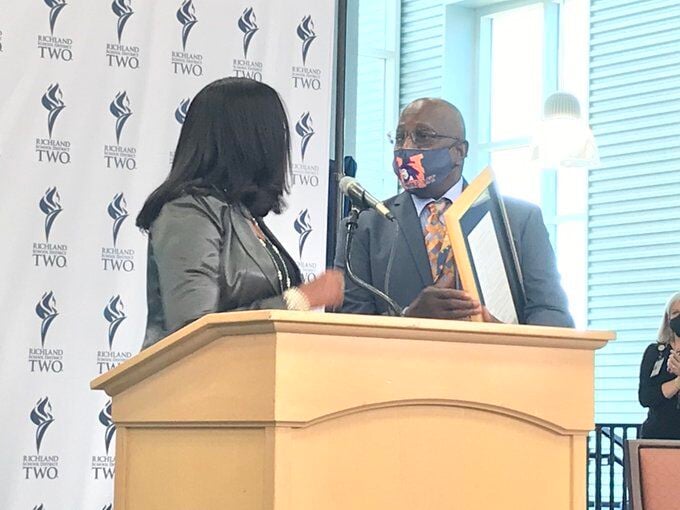 State Sen. Mia McLeod, D-Columbia, presents a proclamation to Richland Two bus driver Kenneth Corbin on May 14, 2021, for his heroism during a hijacking on May 6. Adam Benson/Staff

COLUMBIA — As a veteran Richland Two school bus driver, Kenneth Corbin had just completed his annual pupil safety training on April 26, which included lessons on what to do if a vehicle is ever taken hostage.

Two weeks later, the soft-spoken former electrical engineer was behind the wheel when an armed Fort Jackson trainee burst onto his vehicle that was carrying 18 children to Forest Lake NASA Explorer School, demanding he drive to the next town.

Corbin and the students were released uninjured at a church after a six-minute ride. The trainee was later captured by police.

“We refer to our students as precious cargo. That was so evident on May 6. Our job and goal is to transport that precious cargo to and from school in a safe and timely manner,” Corbin said May 14 at the Richland Two Institute of Innovation. “It was very crucial that I performed my job to the highest degree possible, and I emphasize to parents we take that very seriously.”

Corbin was honored by district officials for his grace under pressure that morning, where he was called a hero by Richland County Sheriff Leon Lott and S.C. Superintendent of Education Molly Spearman.

“Today, you are in the presence of one of our greatest,” Spearman said. “I know the children love you, they're very, very lucky to have you as their bus driver and I know they'll never forget you for the rest of their lives.”

Will Anderson, Richland Two’s chief operations officer, said the district didn’t have one of its 70 monitors inside Corbin’s bus that day, because they’re typically assigned to routes carrying children with special needs.

So Corbin was alone with training that was fresh in his mind when a man wearing Army physical training clothing pointed an empty M4 carbine rifle at his head and told him to drive.

Drivers are taught to speed or operate their vehicles erratically in emergency situations to alert passing motorists, and that’s what Corbin did — blowing past a bus stop.

“He will tell you he was just doing his job, but the way he performed that day was magnificent,” Lott said.

On May 13, state Sen. Mia McLeod, D-Columbia, introduced a proclamation on the chamber floor recognizing Corbin for his heroics. After she read it, colleagues gave him a standing ovation.

“I just want to take a minute and thank God for you. I want to thank him for your patience and your courage,” she said May 14, presenting him with a framed copy of the proclamation. “He put you in that space and in that environment and in those children’s lives and in our lives for a reason.”

Superintendent Baron Davis said officials are doing a thorough review of the district’s safety protocols in the wake of the hijacking.

“'We applaud you for staying with your young students. You attended to their needs in the face of great danger,” Davis said. “Today, we celebrate you and the peaceful ending we all were blessed to receive in a very terrifying situation.”

Davis presented Corbin with student artwork and a stack of thank-you cards collected by Forest Lake from every state in the country.

Corbin deflected any credit in brief remarks before he and his wife Vivian were escorted away from TV cameras. District spokeswoman Libby Roof said he wasn’t comfortable in the spotlight. But Corbin said he showed up to deliver a message.

“My biggest takeaway is the bond that I share with myself and my kids, as it was my goal to get them out of that incident safe and sound. I realize their goal was to do the same by me,” he said. “I've been called a hero, but I will defer that title to my kids.”