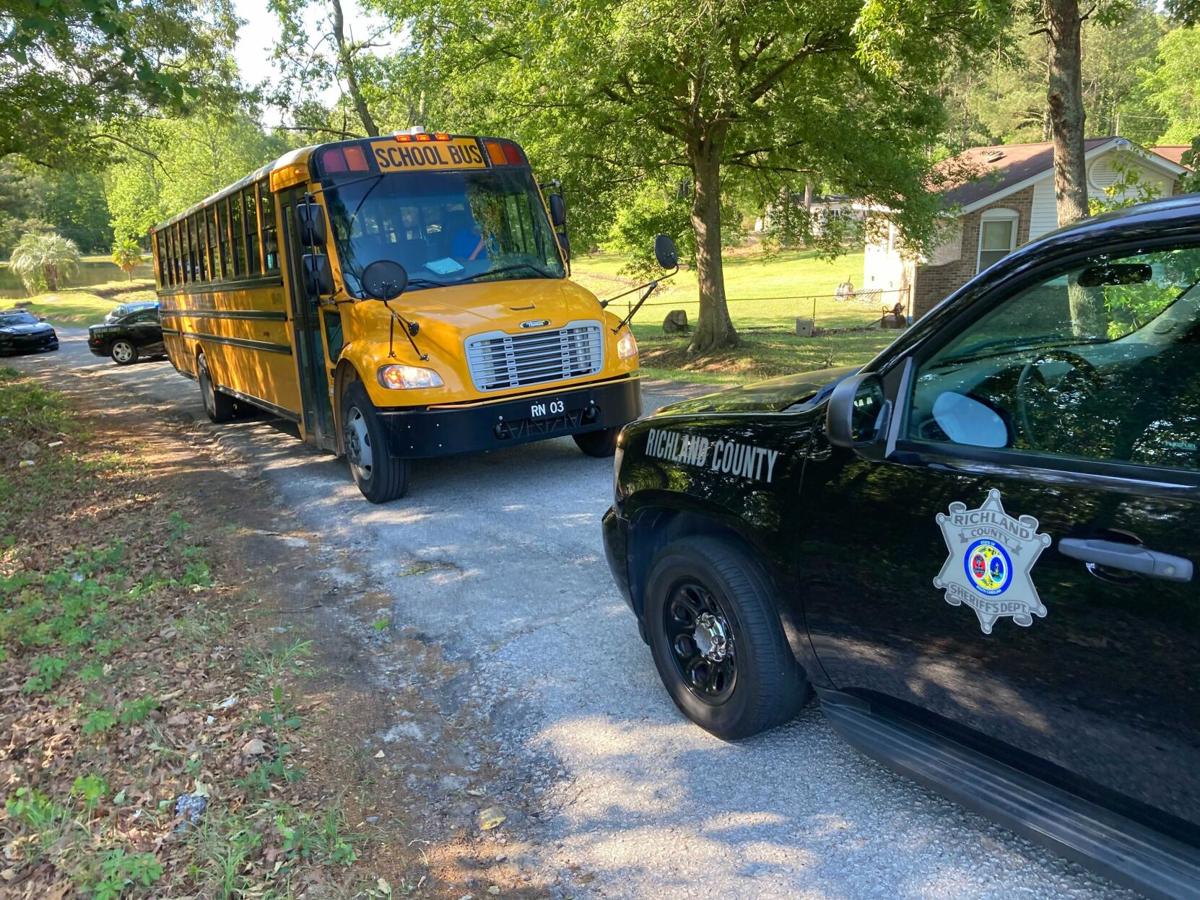 The Richland Two school bus that authorities say was hijacked May 6, 2021, by a Fort Jackson Army trainee. He let 18 students and a driver go before driving the bus to Old Percival and Quincy roads in Columbia. Stephen Fastenau/Staff 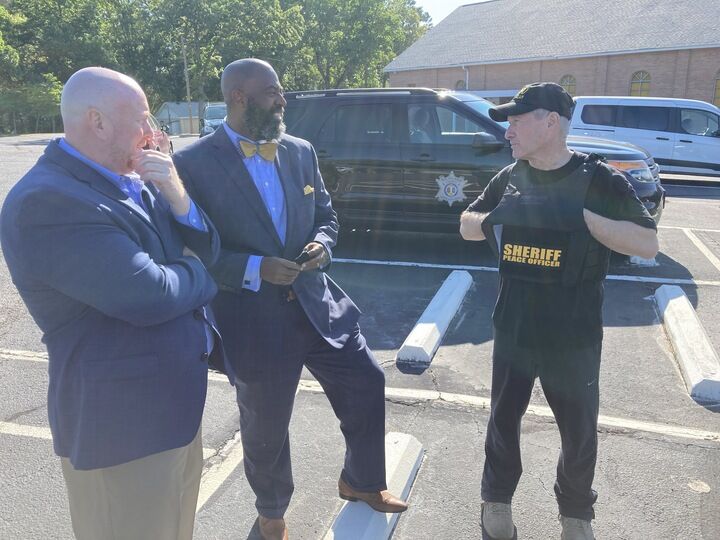 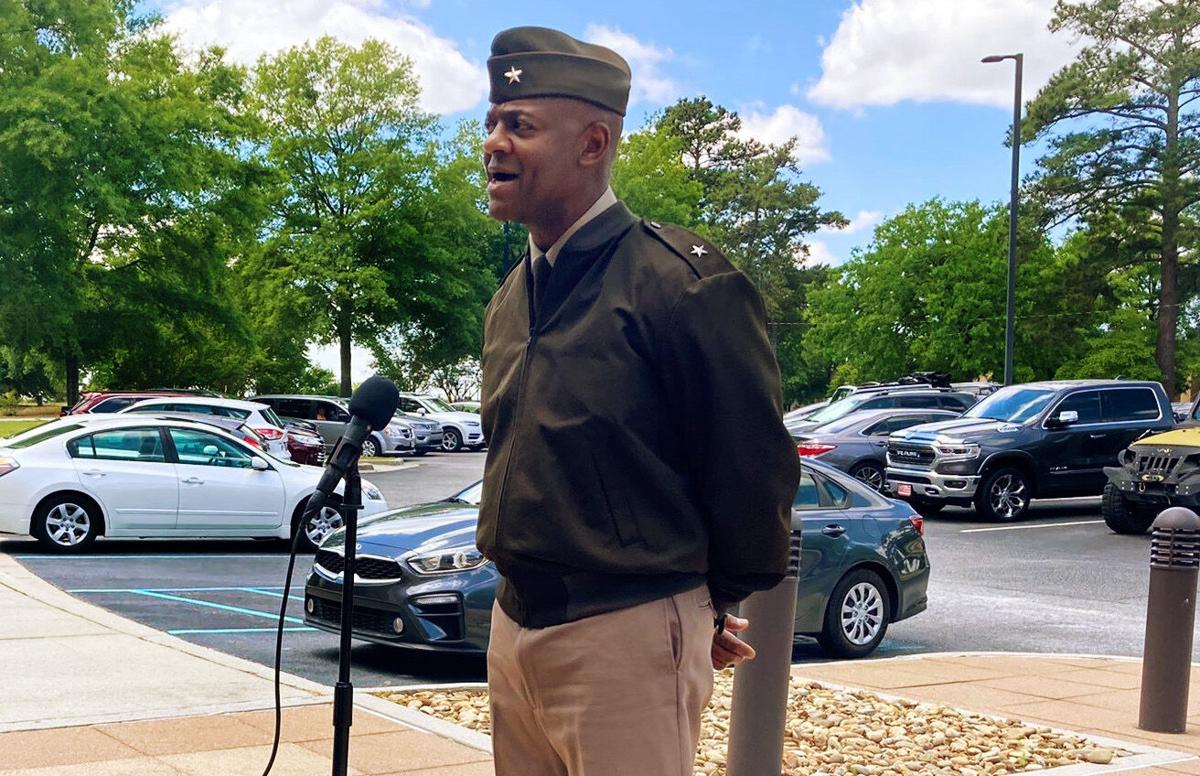 Fort Jackson Commander Brig. Gen. Milford Beagle speaks to reporters May 6 after an Army trainee bolted from the fort with an unloaded rifle and hijacked a school bus with 18 kids. Stephen Fastenau 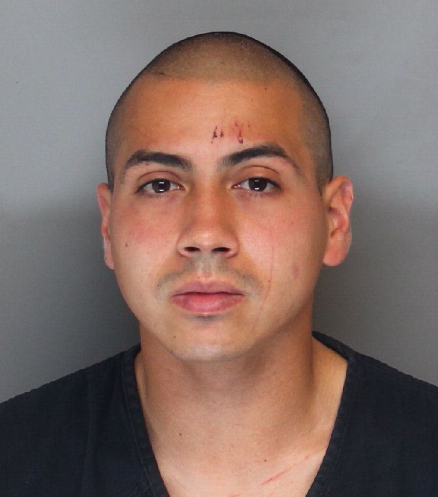 A Fort Jackson Army trainee hops on a Columbia school bus with an unloaded rifle May 6 with 18 kids and orders the driver to take him out of town. The video is edited and later shows the trainee driving the bus after letting the students and driver exit unharmed. The trainee was arrested.

COLUMBIA — An Army trainee who bolted from Fort Jackson while carrying an unloaded rifle hijacked a school bus May 6, eventually forcing off the students and driver as he tried to find a way home, law enforcement and military officials said.

In what he called a "very scary situation," Richland County Sheriff Leon Lott said the 18 children on the bus and the driver were not injured after a ride with the armed trainee who was yelling at them.

“There was six minutes they were traumatized,” Lott told reporters. “Six complete minutes the bad guy was on the bus with a gun.”

The trainee left the fort without permission holding a rifle and went looking for a ride to another town, authorities said. He tried at first to flag down some cars.

About a mile from the fort's Forest Drive gate, the trainee got on a school bus at Percival Road and Eagle Park Road as children were boarding to go to Forest Lake Elementary School around 7 a.m.

The driver tells the trainee to get off the bus in a short video clip shown to reporters.

But the recruit — wearing a black T-shirt with "Army" printed across the chest, black shorts and water backpack — takes the rifle off his shoulder, points it at the driver and demands the driver close the bus door.

"Drive! Drive! Come on drive!" he yells as he stands behind the driver holding the rifle.

"Get out of town, now!" the recruit says later.

The trainee promised he would not harm anyone on the bus, Lott said.

The 23-year-old trainee from New Jersey, who has been identified as Jovan Collazo, did not have ammunition in his M4 carbine rifle, Fort Jackson's commander, Brig. Gen. Milford Beagle, said. The trainee was searching for new clothes and wanted to get dropped off at a bus station or airport to get home, the general said.

Students started calling their parents, and a parent flagged down a Richland sheriff's deputy to inform authorities about the armed man on the bus.

Lott said children were asking the trainee about what would happen to them and the driver tried to calm the recruit.

The trainee became frustrated and ordered the bus to stop. The kids and driver were let out at Alpine Baptist Church on Alpine Road just off Percival Road, about 4 miles north from where he got on the bus.

The trainee drove the bus another mile north but had difficulty handling it, Lott said. He abandoned the bus on Old Percival Road near Quincy Road, leaving the rifle behind.

The trainee was later captured by police near an overpass at the heavily traveled junction of Interstate 77 and Interstate 20, about 2 miles south of where he abandoned the bus.

"I think God looked down on these kids this morning and wrapped his arms around them and took care of them," Lott told reporters during a May 6 news conference held in the Alpine Baptist parking lot.

Collazo was charged with 19 counts of kidnapping and one count each of armed robbery with a deadly weapon, carjacking with great bodily harm, pointing and presenting a firearm at a person, carrying weapons on school property and possession of a weapon during a violent crime, the Sheriff's Office said.

The charges did not matter whether the rifle was loaded or not, Lott said.

Collazo is being held at Alvin S. Glenn Detention Center. Collazo also could face military charges, including possibly being absent without leave and theft of a weapon, Beagle said.

The trainee was in his third of 10 weeks of training at the fort, Beagle said, a time when some recruits feel anxiety about being separated from loved ones.

That's what appeared to happen with the trainee accused of hijacking the bus, the general said. The trainee did not have any prior record of mental issues, Beagle said.

"He was a very quiet individual," the general said.

The trainee was supposed to carry his rifle at the fort, but recruits do not receive ammunition until their fourth week of training, Beagle said. Even then, the ammunition is limited to the shooting range and participants are screened for any shells before they leave, according to Beagle.

Fort personnel noticed the trainee was missing just before breakfast and began a search, Beagle said. He got about a half-hour head start, the general said, but the forests lining the 52,000-acre fort make it tough to determine an escape route.

"You're looking for a needle in a haystack," Beagle said of the Army's largest training base where 48,000 new recruits pass through each year.

Fort leaders will examine how the trainee was able to escape. Beagle said some other trainees have left the fort without permission during his three years in command, usually around Christmas or just before getting kicked out, but none had a weapon.

"For me, this was a key failure in our accountability processes that I will fix going forward because the outcome, potentially could have been much worse," Beagle said.

The hijacking comes three weeks after a White sergeant from Fort Jackson was suspended from duty after he was caught on video shoving a smaller Black man outside the sergeant's home in The Summit residential subdivision during a confrontation.

Beagle said he wants to avoid a repeat of incidents like those in the past three weeks.

"Bad things are unfortunately going to happen, and we hate when they do happen," he said. "We appreciate the fact that we do have a strong relationship (with the community) and we appreciate the understanding, even when something does not go well for us here at Fort Jackson."

Richland Two School District board Chairman James Manning told reporters the district has plans for emergencies like the hijacking, including informing parents.

"This is something that unfortunately we have to practice," he said.

In the wake of the bus hijacking, Richland Two trustees scheduled a special meeting for May 7 to discuss school bus security.

Richland Two Superintendent Baron Davis said the driver in the hijacking successfully used techniques that are part of training courses, called "Stranger at the Bus Stop," for de-escalating hostage situations.

The district plans to offer counseling to the students in the aftermath of the bus hijacking, Davis said.

"I have never been as scared as in my life upon receiving that call," Davis said. "Every child is a precious child to all of us."

Columbia Mayor Steve Benjamin said the bus hijacking backs the city's efforts to have ordinances restricting firearms near schools and blocking people considered at high-risk from possessing guns. Both ordinances were struck down in state court this week in a lawsuit brought by S.C. Attorney General Alan Wilson, who said the city overstepped its authority.

"This brings into clarity that we must all understand the gravity of doing what we can what to ensure the best interests of public safety," Benjamin said.