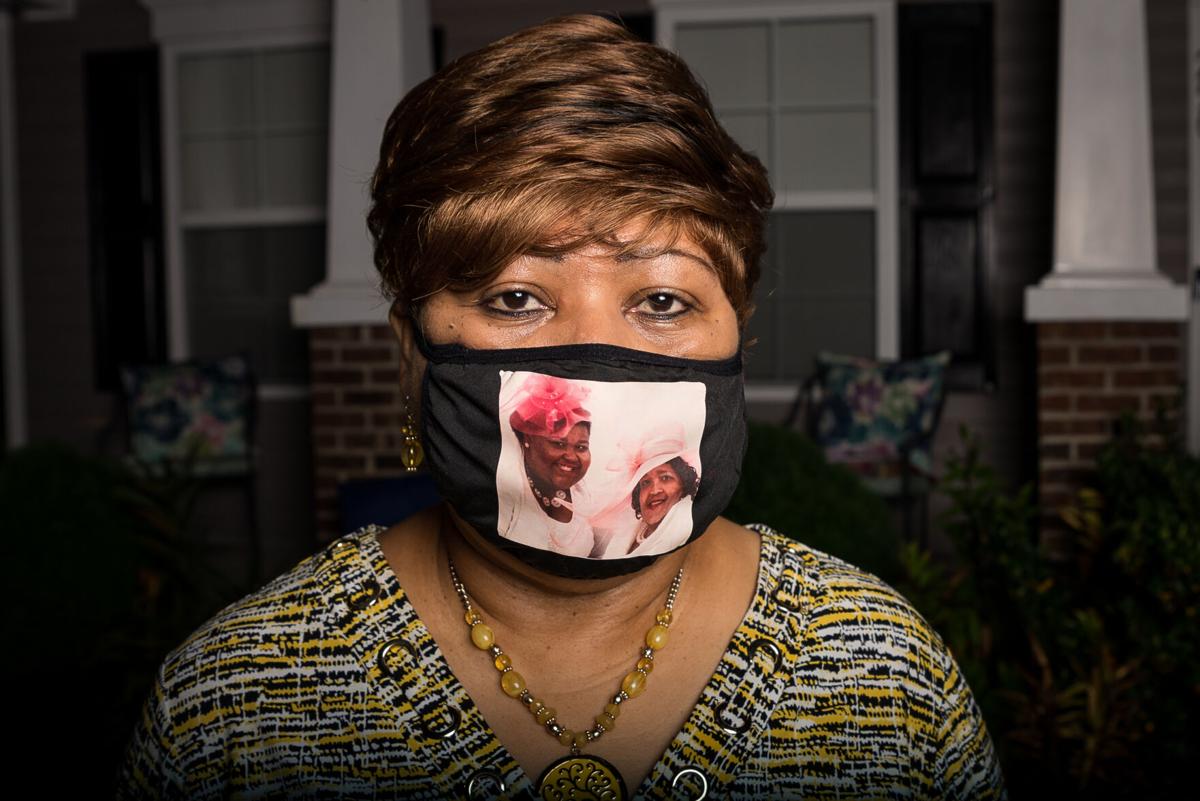 Martha Jones wears a mask with photos of Demi and Shirley Bannister. Jones is Demi's aunt and Shirley's sister-in-law. John A. Carlos II/Special to The Post and Courier 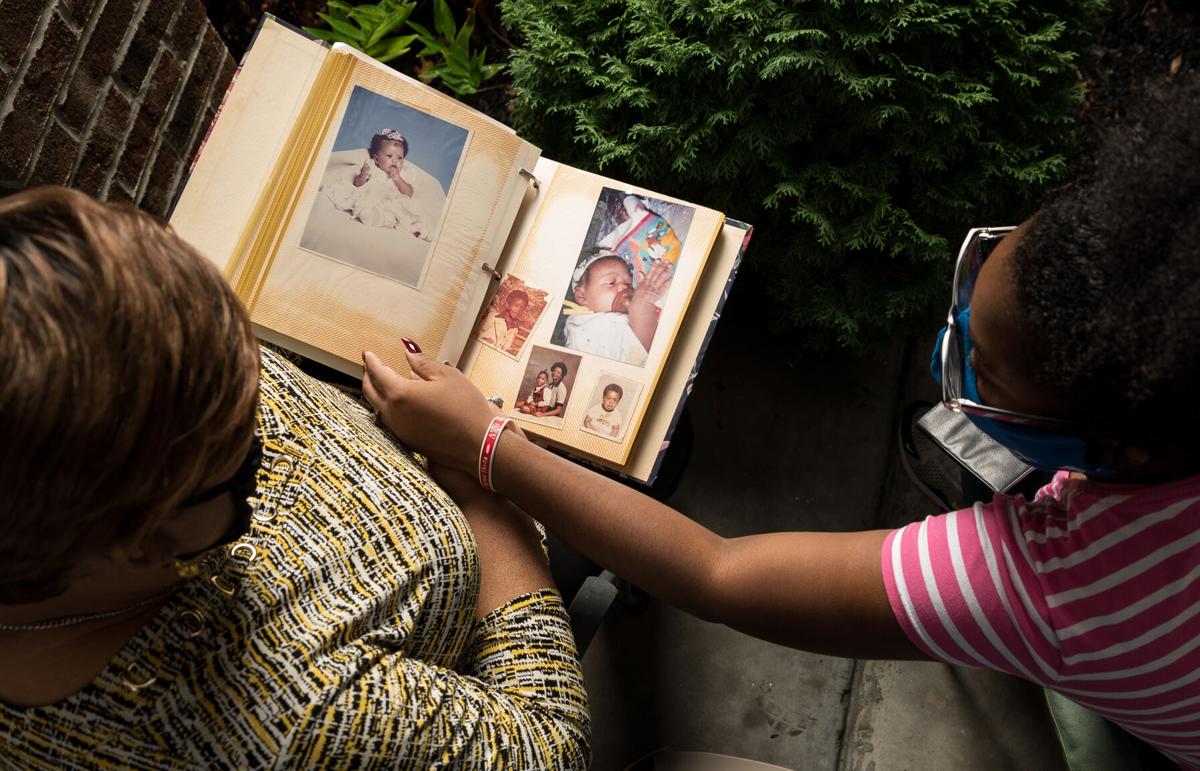 Martha and Shayla Jones look at baby photos of their relative Demi Bannister, who died on Sept. 7 from COVID-19. John A. Carlos II/Special to The Post and Courier 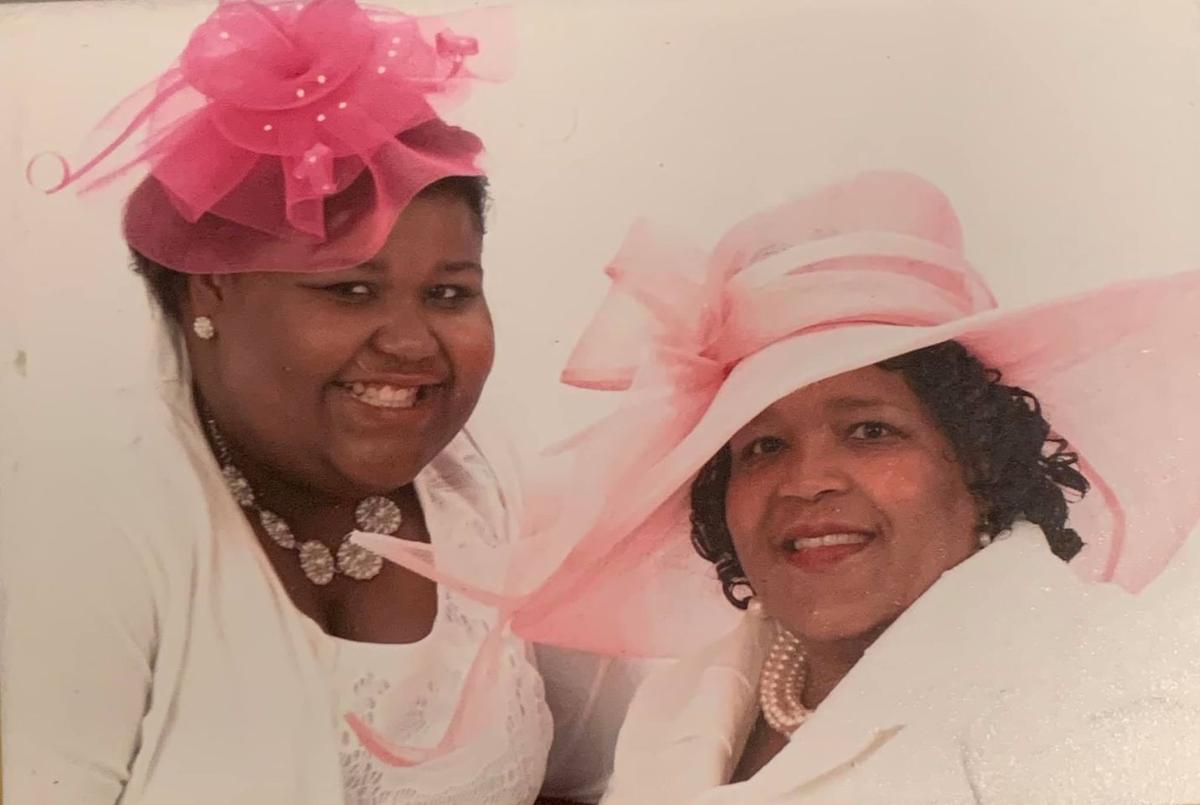 Demi Bannister, 28, (left) and her mother Shirley, 57, died of COVID-19 within weeks of one another. Provided 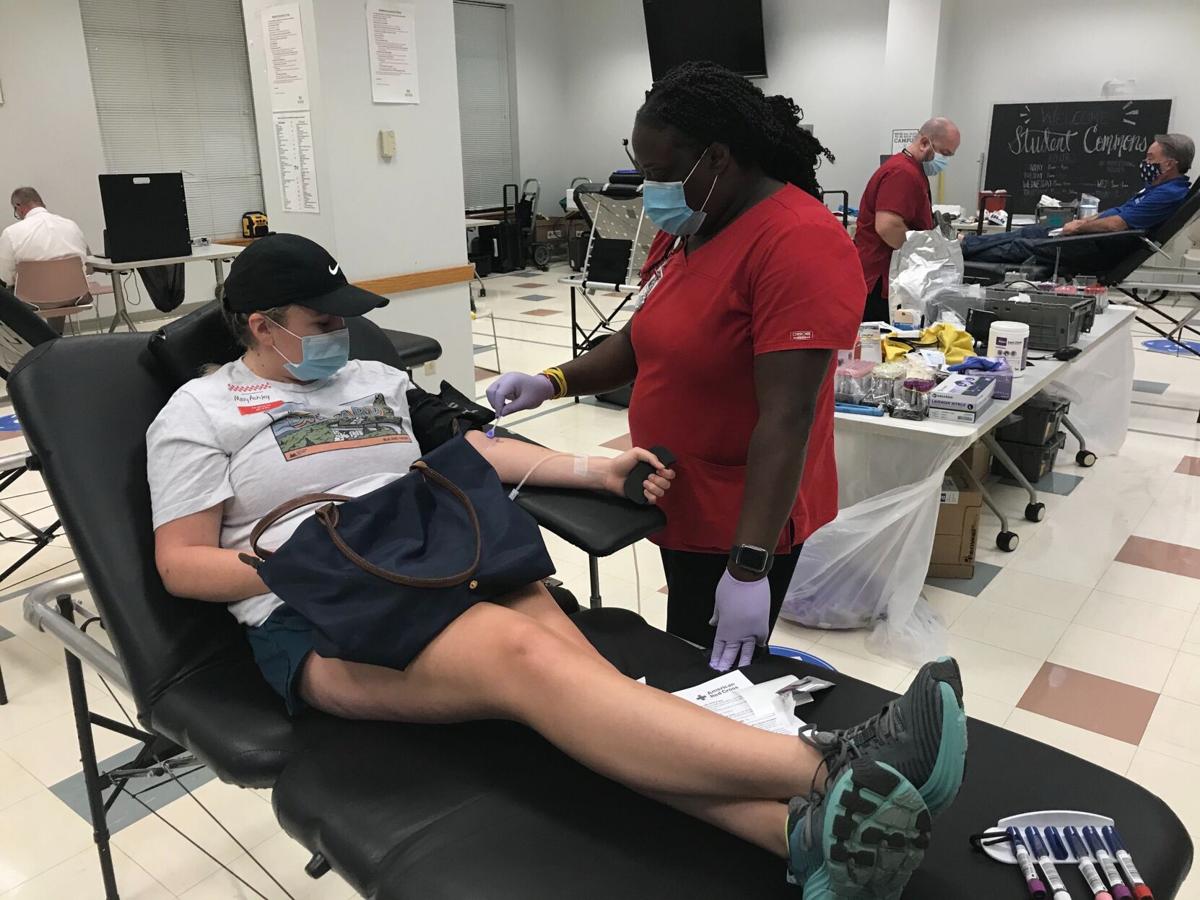 Mary Ashley, a Midlands Technical College nursing student, donates blood in this Oct. 13 photo at a drive named in honor of Shirley Bannister, the school's nursing department head who died of COVID-19 on Sept. 27. Adam Benson/Staff

COLUMBIA — Hours after her only child, Demi, died from COVID-19 on Sept. 7, Shirley Bannister entered a walk-in medical clinic for a test and learned she contracted the virus.

Shirley would die 20 days later from the infection that claimed her daughter and more than 3,400 other South Carolinians.

“There are times I tend to forget that this is actually real," said Shayla Jones, Demi’s cousin and Shirley's niece. "Sometimes we felt like they just went somewhere. They took a trip and they’re going to come back.

"They took a trip, correct, but Heaven doesn’t have a return policy."

Relatives and friends of the Columbia-area pair say they try to see the graciousness from the mother and daughter who fell to a virus that has swiftly caused so much suffering.

Neither “could keep their goodness to themselves. They had to share it,” is how pastor Warren Bolton put it at their Oct. 2 funeral, where they were laid to rest in matching rose-covered caskets.

The Bannisters shared backgrounds in education.

Shirley was 57 and ran the nursing department at Midlands Technical College. She always loved helping others, relatives and friends said, deciding to train nurses after overseeing them for years at the S.C. Department of Mental Health.

Demi was 28 and taught third graders at Windsor Elementary School. She decided in college she wanted to share her passion for education with children.

During the memorial service at Columbia’s Bible Way Church of Atlas Road, Christina York, a fellow third grade teacher who worked with Demi for two years, clutched her cellphone to her heart and wept as she read one of the final text messages Demi sent her.

It was a poem, jokingly wondering about the status of their friendship. The educators spoke almost daily but that tapered off over the summer.

“I had a friend named Christina, she was one of a kind," the poem begins. "She was always there for me, in the nick of time, she always had advice to help me be my best, I haven't heard from her in a while, I guess our friendship is at rest."

The computer in Shirley’s darkened Midlands Technical College office remains on, its desert landscape wallpaper casting a muted glow across her desk.

Just a few feet away, her framed degrees rest on a mahogany shelf: one from May 5, 1993, when she earned an associate’s degree in health science from Midlands Tech and another awarded seven years to the same day, a bachelor’s degree of nursing from the University of South Carolina.

"The Bannister Beauties," a group of students she taught during the first semester of 2016, wrote her a poem. It sits next to her diplomas.

“For someone who had such a joyous spirit to not be here, it’s really kind of a vacuum," Midlands Tech chief academic officer Dianne Carr said. "There’s just such grief and there’s, I think, a lot of gratitude for the life she lived and the life her daughter lived."

Twenty miles away, the third grade hallway at Windsor Elementary School is lacking the sing-song voice of a passionate teacher everyone called Demi. Sometimes, Demi would add an improvised dance to her routine and, most always, a laugh.

“She was the life of Windsor, she was the life of the third grade hallway whether she was singing, dancing, laughing or talking, she made her presence known,” York said. “Her students loved her, and so did I.”

Demi's last day in Room 506 at the school off Dunbarton Drive in Columbia was Aug. 28, as she prepared for her fifth year teaching. School started Aug. 31, but because of Richland School District Two's COVID-19 precautions, classes began remotely.

A week after her last visit to Room 506, on Sept. 4, she tested positive. She never saw her students face-to-face.

Losing Demi was unbearable for Shirley, colleagues said. Soon, Shirley herself was hospitalized with complications from the virus.

“The fact she lost her daughter, I don’t think she felt she could move forward,” said Candace Doyle, dean of Midlands Tech’s School of Healthcare.

Loss of a teacher

Last year, Demi’s creativity made her a viral sensation after she wrote an original song to the tune of Lil Nas X's “Old Town Road” as part of a school attendance campaign.

The video has been viewed more than 1 million times across social media platforms: "I'm on my way to Windsor, 'cause I can't get a tardy no more / I got my books all in my bag, homework is attached," Demi sang over the rap song's beat, students dancing behind her.

“The children that she has impacted will always remember that Ms. Bannister was my biggest cheerleader,” Windsor Elementary Principal Denise Quickel said.

Demi’s death underscores the balancing act school districts across the country face as they consider when to reopen classrooms. According to the American Federation of Teachers, 210 of its members have died from COVID-19 related complications since the spring.

Nearly all Midlands school districts have either sent or have plans to return students to classrooms on hybrid or full-time schedules by month’s end.

“I have no idea what Richland School District Two experiences with the loss of a teacher. I never want to be that superintendent,” she said during a Sept. 28 board meeting.

Some SC teachers quit, others face burnout as schools reopen amid coronavirus pandemic

Demi was memorialized on the S.C. Statehouse floor Sept. 17, where Democratic state Rep. Kambrell Garvin of Columbia, her lifelong friend, remembered her as an exuberant, warm soul. Lawmakers stood on the House floor in a moment of silence.

Demi, who called him “Kampster,” took a selfie with Garvin and his wife, Monique, at January's Pink Ice Gala. It was the last time they saw one another.

“She could captivate any audience, whether it be her students or a crowd at a show,” he said at Demi's funeral service.

Shirley was equally inspiring, those who knew her said.

Mary Ashley, who took a course from Shirley her sophomore year, donated blood for the first time in honor of the professor who worked to get students into health care facilities during the midst of a pandemic.

“She really advocated for her students. We probably wouldn’t be in a clinical setting if she didn’t fight as hard as she did for us, with COVID (happening) and everything,” Ashley said. “I hadn’t lost anyone I knew to COVID, so me and my clinical group, it hit us kind of hard.”

Just two semesters away from graduating, Ashley said Shirley's natural instincts and leadership makes her desire to be a nurse even stronger.

“She deserves everything,” Ashley said.

Before arriving at her alma mater, Shirley was well respected for her devotion to the principles of nursing. She spent decades within the state’s Department of Mental Health and was director of nursing at its C.M. Tucker Center from 2010 through 2013.

“Nursing is more than doing an eight-hour job. It’s about giving back,” Shirley said in a 2012 agency profile of the center.

“Shirley’s dedication was shown in everything she laid her hands on,” said one of her closest friends, Stephanie Kemp, who prayed with Shirley in the hospital the morning she died. “Her goals and ambitions were to see people succeed in life.”

In Midlands Tech President Ronald Rhames’ office, an electronic picture frame shuffles through photographs of Midlands Tech’s people and places. Now, he has a favorite one. There’s Shirley, smiling under a white hard hat.

“It will remind me of how she touched my life,” Rhames said.

Before she died, Shirley was organizing a blood drive, urging students and faculty to donate. After her death, Midlands Tech leaders wondered if they should conduct the event without her.

Rhames decided to move ahead and hold the blood drive. He also named it in her honor. Pre-registration for the two-day event tripled.

Relatives said naming the drive after Shirley was a fitting tribute.

Jones, Demi’s cousin and Shirley's niece, has been struggling to find meaning in their departures.

“We’ve prayed a lot more since all of this. It has been a truly difficult time for all of us, but we can find more good than the bad,” she said. “We’ll talk to anyone because it shines their light. They were truly great people.”