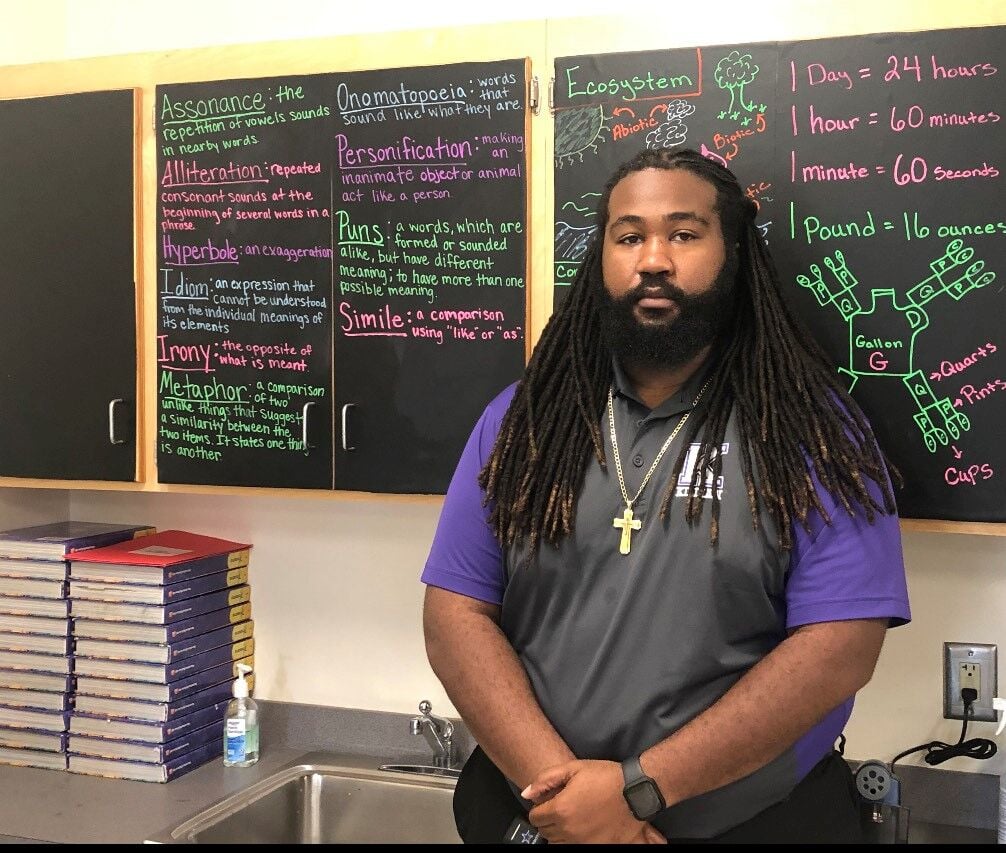 Brandarius Jones stands in his fifth grade classroom at Killian Elementary School in Columbia. Jones, 27, is among the 6 percent of minority male teachers within Richland County School District Two — a rate three times higher than the national average. Photo provided 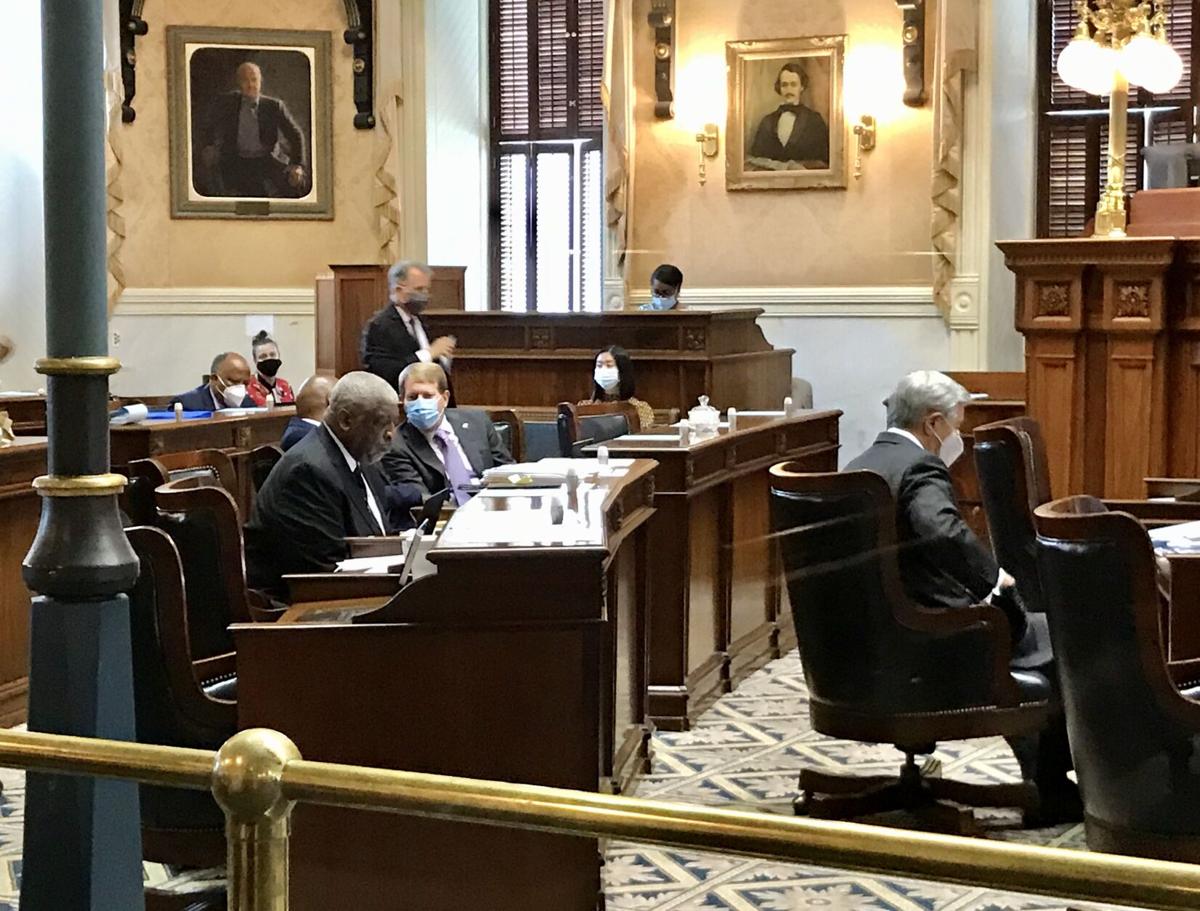 State Sen. Floyd Nicholson, a Greenwood Democrat, works from the Senate chambers on Wednesday, Sept. 16, 2020. A product of his city’s segregated school system, Nicholson went on to serve as biology teacher and assistant principal in the Greenwood School District 50 and is a proponent of bringing more minority teachers into classrooms. Seanna Adcox/Staff

Brandarius Jones stands in his fifth grade classroom at Killian Elementary School in Columbia. Jones, 27, is among the 6 percent of minority male teachers within Richland County School District Two — a rate three times higher than the national average. Photo provided

State Sen. Floyd Nicholson, a Greenwood Democrat, works from the Senate chambers on Wednesday, Sept. 16, 2020. A product of his city’s segregated school system, Nicholson went on to serve as biology teacher and assistant principal in the Greenwood School District 50 and is a proponent of bringing more minority teachers into classrooms. Seanna Adcox/Staff

COLUMBIA — Brandarius Jones follows the same routine every time he flips his bedroom calendar to a new month.

In pen, he writes, “you’ll be dead or in jail by the time you’re 18,” echoing the refrain of his former sixth grade teacher.

Now 27 and a first-year educator in the Richland School District Two system, Jones, who is Black, has made the piercing remark part of his identity, a hurtful childhood souvenir that’s become a linchpin of his adult life and the career he loves.

“I was counted out a lot when I was in school. I was told some things that I don’t think teachers should say. And that gave me the fire, because I know how some kids were treated,” Jones said. “I look at that statement every day so I can know my purpose.”

Across the country, male teachers of color occupy just 2 percent of all classrooms even as minority student populations continue to grow, according to the American Federation of Teachers.

The rate is three times higher in Jones’ district, but still far below what Superintendent Baron Davis prefers for a system where 60 percent of students are non-White.

Jones was brought to Killian Elementary through an initiative called the Premier 100 that seeks to add 100 male minority teachers at Richland Two schools by 2024. It was created in 2019 by Davis, a 48-year-old who is the first Black superintendent in Richland Two’s near century-long history.

“The pipeline of men of color going into the education field is as dried up as any pipeline that exists," Davis said. "We want to expand that, because we want to give our students a more diverse cultural experience.”

Of South Carolina’s 51,266 public school teachers in 2019, just under 4 percent — or 1,910 — were minority males, according to state education data provided to The Post and Courier. Richland School District Two officials were able to hire 23 male minority teachers in the Premier 100’s inaugural year, including Jones.

“We need to see people that look like us in these positions, and there’s a lot of us out there,” Jones said. “In my personal opinion, I think there should be an African American male (teacher) in every school."

Davis hopes that a key partner in the effort will be the Call Me MISTER initiative from Clemson University that seeks to deepen the pool of South Carolina teachers from diverse backgrounds. It focuses on in-depth peer mentorship for cohorts of minority male students studying early childhood or elementary education in college.

The program is an acronym for Mentors Instructing Students Toward Effective Role Models. Twenty-five colleges across the state have implemented Call Me MISTER programs since its founding 20 years ago.

Students in the Call Me MISTER program receive tuition assistance, help with job placement and a comprehensive academic support network throughout the duration of their college tenure.

Today, there are some 175 MISTER graduates in South Carolina.

Davis’ vision to hire 100 minority male teachers in his district within four years is an admirable goal, but will be challenging, said Roy Jones, executive director of Clemson's MISTER initiative.

Since its first South Carolina group graduated in 2004, Call Me MISTER has produced just over 300 teachers.

Davis understands the tough task he’s taken on, but the cause is personal.

“As a person who has spent his entire career in this field, as a person who has experienced what those biases feel like when you walk into a room and people assume that you are the coach or the janitor or whatever, it's beneficial for us to ensure we are at least striving to provide that (teacher diversity),” he said.

Richland Two’s board members support Davis’ minority hiring efforts, which are not part of his formal evaluation but an internal goal he set for the district.

“A student cannot be what they cannot see,” trustee Teresa Holmes said at a September board meeting. “It is important for minority males in the achievement aspect to see somebody who looks like them other than in the sports arena.”

A 2017 Johns Hopkins study found the probability of a Black student dropping out of school is cut by 29 percent if they have at least one teacher of color between the third and fifth grades, underscoring the need for Richland Two’s strategy, officials say.

Even in the era of segregated schools, having a Black teacher in the classroom was essential, said Floyd Nicholson, a longtime state senator from Greenwood.

The 71-year-old was educated in such a system, but came back to teach science and biology at Greenwood High School in 1972, two years after integration.

Matriculating through an all-Black school network, Nicholson was surrounded by teachers who looked like him. That drove him to pursue a bachelor's degree from South Carolina State University.

"I wanted these kids to see I had an academic background. We need those males (of color) to be role models for young Black kids, who might not have a positive father figure in their homes," said Nicholson, a Statehouse Democrat.

With his dreadlocks and long beard — elements of the Black culture Jones refuses to leave behind, as a reminder that young students who look like him can do anything they want — the one-time Newberry High School football player agrees.

While Jones couldn't have anticipated opening the school year virtually because of the ongoing COVID-19 pandemic — classes started remotely in the district on Aug. 31 — the newly forged relationships with his students will only strengthen when in-person teaching returns, Jones believes.

That’s why he keeps his virtual lunch hour open every day to students, where talk of lesson plans are sidelined in favor of Jones’ determination to leave those kids with a moment of personal connection instead.

Jenna Schiferl contributed to this story.