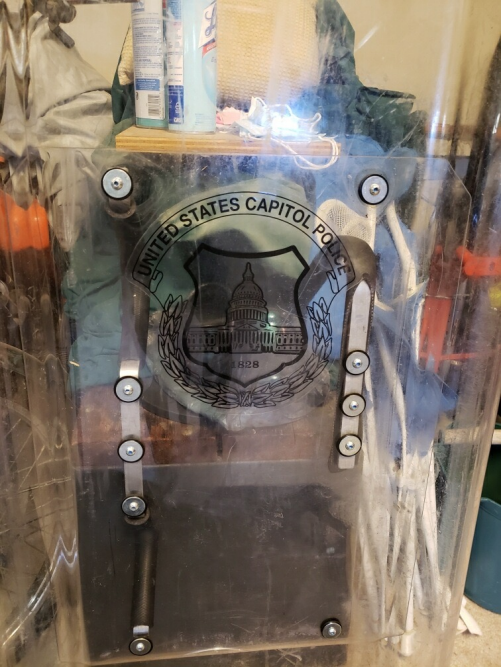 A U.S. Capitol Police riot shield was confiscated in February by FBI agents from a Gilbert home where James Giannakos Jr. lived, according to court documents. Giannakos has not been charged in connection to the Jan. 6 riot, but he pleaded guilty to threatening a former federal prosecutor. File/U.S. Department of Justice/Provided 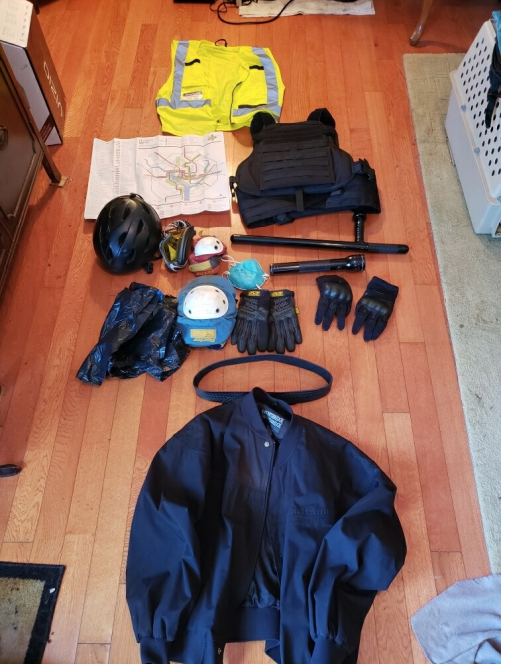 Riot gear and a Washington, D.C., subway map were confiscated in February by FBI agents from a Gilbert home where James Giannakos Jr. lived, according to court documents. Giannakos has not been charged in connection to the Jan. 6 riot, but he pleaded guilty to threatening a former federal prosecutor. File/U.S. Department of Justice/Provided

COLUMBIA — A Gilbert man linked to the riots at the U.S. Capitol in January is expected to plead guilty to making threatening phone calls to a former federal prosecutor over information released on the leader of the alt-right group Proud Boys.

During a Feb. 3 search of the man's Lexington County residence, FBI agents found multiple items, including a U.S. Capitol Police shield, which federal law enforcement said in court documents showed "probable cause" that James Giannakos Jr. participated in the mob that overran the Capitol. The riots were an effort to prevent Congress from certifying the results of the 2020 presidential election.

The FBI also confiscated a "riot bag" that contained a map of the District of Columbia's Metro system, eye protection, a bike helmet, a tactical vest with hard plates, baton, flashlight, masks and gloves, according to a search warrant filed in federal court.

The event, which followed a rally held by then-President Donald Trump, resulted in the deaths of five people — a Capitol Police officer and four protesters — as well as more than 100 injuries.

No reason was given in court records why federal authorities have not charged Giannakos for his alleged involvement in the riot. The U.S. Attorney's office in South Carolina declined comment, with spokesman Michael Mule' saying, if any charges are filed, they will come from the office for the District of Columbia.

A call to Giannakos' attorney was not returned.

This month, however, Giannakos signed a plea deal for threatening a former federal prosecutor in Florida and her employer. The caller was upset over the release of news that Proud Boys leader Enrique Tarrio was an FBI informant. A change of plea hearing to finalize the agreement will be held at a later date, according to Mule'.

"If anything happens to Mr. Enrique Tarrio, the same thing will happen to you and your family," read a transcript of a voicemail from a phone number linked to Giannakos' residence that was included in court documents.

The man in the voicemail, who introduced himself as James, was angered over the release of information about a confidential informant who was reportedly Tarrio, according to an affidavit filed in federal court.

"If anything happens to him, I promise you and your associates will pay for it. You will be held responsible," the voicemail continued.

Messages left on the voicemails of other employees at the former prosecutor's law firm demanded the attorney be prosecuted, telling one employee that the federal lawyer's "family is in danger and so are you," according to the transcript included in an affidavit.

Giannakos pleaded guilty to the crime of making an interstate threat and faces up to five years incarceration and a $250,000 fine. But federal prosecutors will lobby for a lower sentence in exchange for his cooperation in identifying and testifying against others involved in crimes of which he has knowledge, which could include other Capitol riot participants.

At least four other South Carolinians have been arrested for their roles in the Capitol breach to date.

William Robert Norwood III, 37, of Greer faces charges including theft of government property for allegedly stealing an officer’s helmet and tactical vest, which an FBI agent said were later found in a storage trailer in Greenville.

Andrew Hatley was charged with breaking into the U.S. Capitol after an investigation that relied on GPS data and a selfie the man allegedly took while inside the building.

And two 19-year-olds from the Fort Mill area — Elias Irizarry, a Citadel cadet, and Elliot Bishai, a U.S. Army recruit — were each charged with three federal misdemeanors for entering a restricted building and disorderly conduct on Capitol grounds.