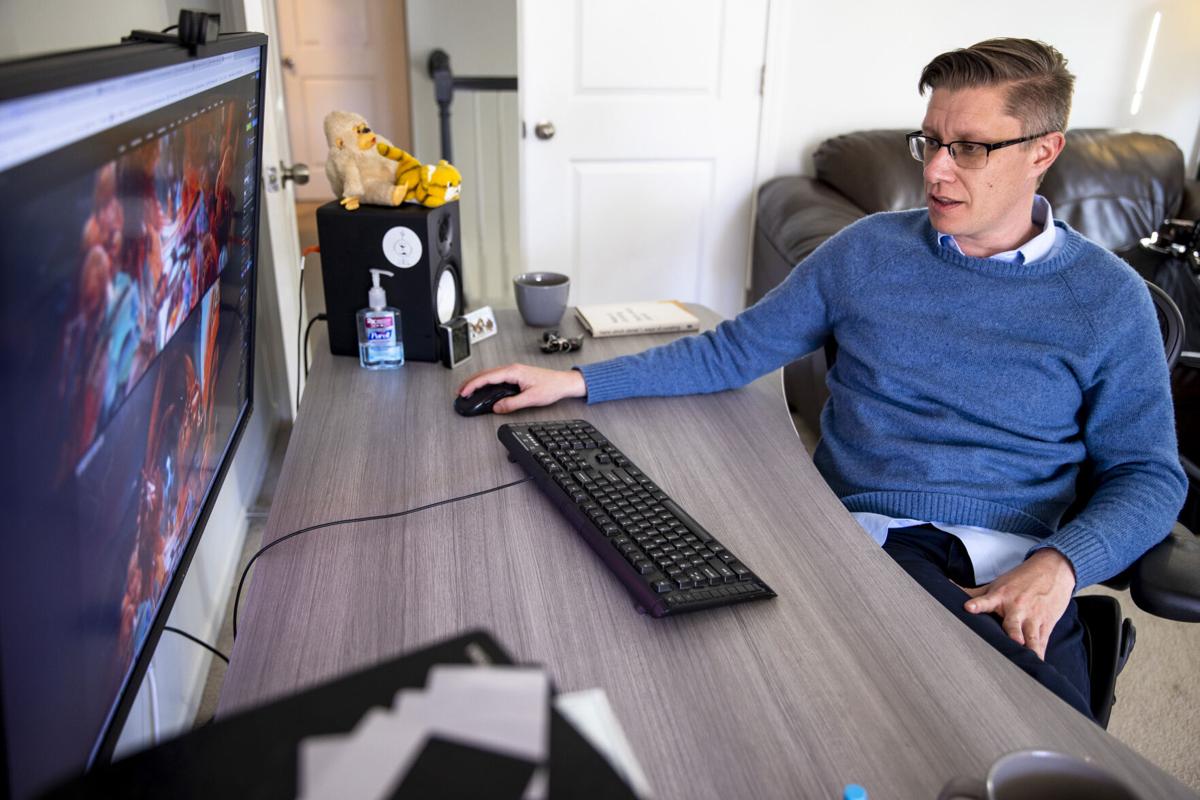 Mike Winkelmann, who goes by Beeple, shows off his digital art process in his home studio on Wednesday, Feb. 24, 2021, in North Charleston. Winkelmann just made a record-breaking $69 million for one of his digital pieces. File/Andrew J. Whitaker/Staff 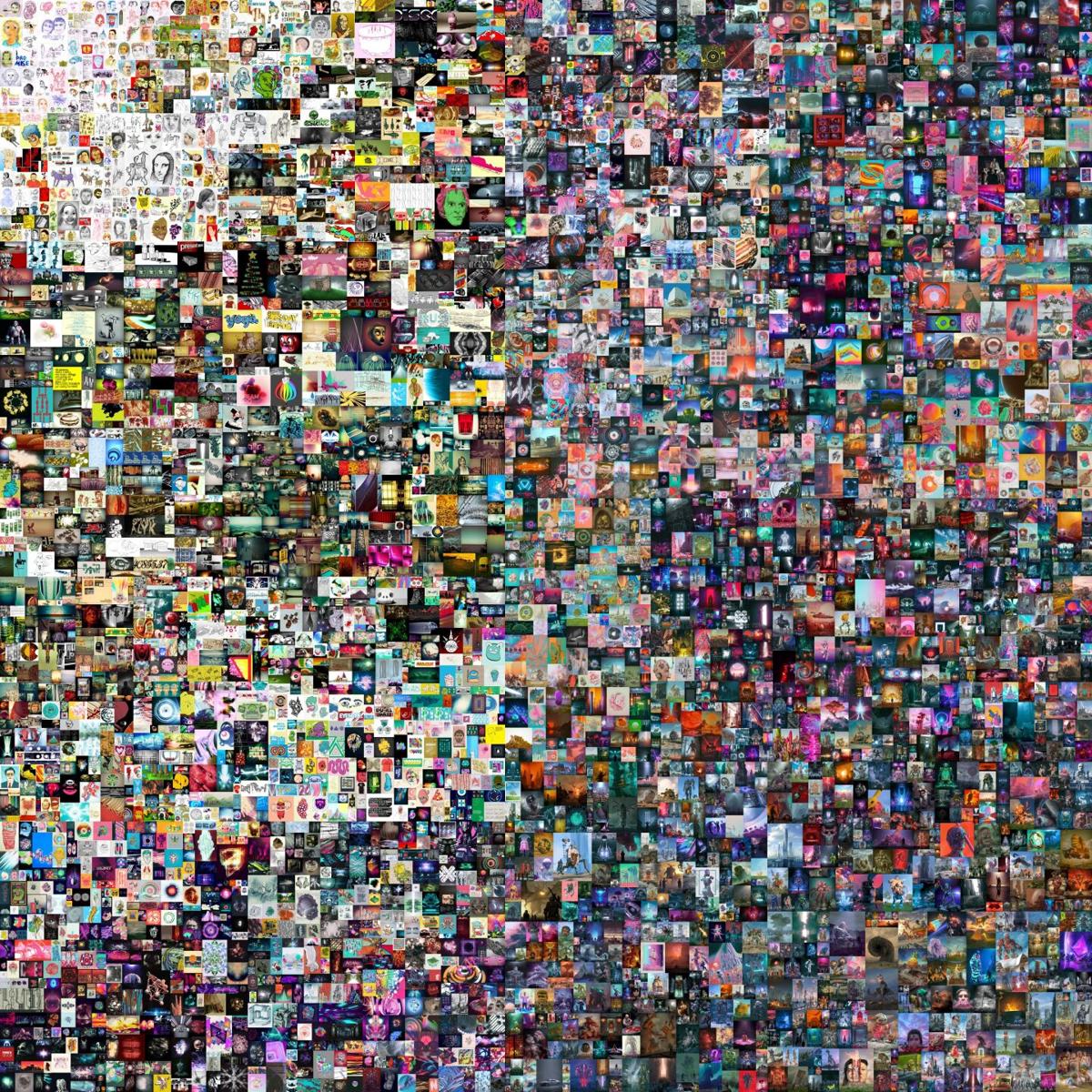 This image released by Christie's on Thursday, March 11, 2021 shows a digital collage titled “Everydays: The First 5,000 Days," by an artist named Beeple. Christie's says it has auctioned off a digital collage by an artist named Beeple, whose real name is Mike Winkelmann, for nearly $70 million, in an unprecedented sale of a digital artwork that fetched more money than physical works by many better known artists. The piece sold for $69.4 million in an online auction, “positioning him among the top three most valuable living artists," Christie's said via Twitter on Thursday. Christie's/AP

Mike Winkelmann was already transforming the digital art collection realm when he made $3.5 million in one weekend for his online creations. Now, the North Charleston artist who goes by Beeple has sold a single digital piece for a record-breaking $69.3 million through international auction house Christie's.

The piece, which exists as non-fungible token-based (NFT) artwork, is a unique digital rendering that lives on a blockchain and can thus verify ownership. While anyone can download the image from social media or the web, only one person can own it.

"Artists have been using hardware and software to create artwork and distribute it on the internet for the last 20-plus years, but there was never a real way to truly own and collect it," said Winkelmann. "With NFTs that has now changed. I believe we are witnessing the beginning of the next chapter in art history, digital art."

The record-breaking sale positions him “among the top three most valuable living artists,” according to the auction house.

“The last year has been an extraordinary period for the art market, and today’s result is a fitting tribute to the significant digital transformation that has taken place at Christie’s," said Noah Davis, Christie's post-war and contemporary art specialist. "And just as our business has evolved, so has the way in which art is being made."

Until October, the most Beeple had sold an image for was $100. Then a pair of NFTs went for $66,666.66 each. Last month, one of those resold for $6.6 million. Those already astounding numbers pale in comparison to the auction price, which started ticking upward at an exponential rate on the final night of the auction.

Leading up to the auction, Winkelmann told The Post and Courier he was hopeful his piece would garner attention and fetch a fine fee but didn't know how high the price tag would go.

"The market can say it's worth a stupid amount," Winkelmann said. "And I'm like, 'You guys said that. Not me.' "

In a matter of months, the NFT format he was experimenting with has proven to be unexpectedly lucrative. His process of creating one digital image a day — brainstormed and designed in software program Cinema 4D — for more than a decade now is finally paying off.

"I didn't invent this format, but I was just in the right place at the right time," he said. "If you're picturing a boring dork who doesn't know what ... is going on right now, yep, that's me."

Over the years, Winkelmann's art has grown from crude online sketches to colorful abstracts to political and social messages. Images such as a depiction of Amazon CEO Jeff Bezos as a giant octopus wreaking ocean havoc to a robot alien Pikachu on a fictional planet immediately capture the eye and make a statement.

They've drawn more than 1.9 million followers to his Instagram page.

Winkelmann moved from Wisconsin to the Lowcountry in 2017 in search of milder winters and lives in an unassuming, middle-class neighborhood in North Charleston. He wears glasses and button-up shirts with slacks and slicks his hair to the side. His work desk features a Yoda figurine and stuffed animals.

This article was originally published in Charleston Scene on March 11, 2021.

Letter from the Publisher

From Hollywood to the Holy City

In 2021, actor AJ Buckley and his family made the decision to move across the country from California and make Charleston their home. Read moreFrom Hollywood to the Holy City

Playing tourist in your own town

Since moving here a few months ago, on Sundays I usually play tourist. Read morePlaying tourist in your own town

A guide to dog-friendly adventures around Charleston