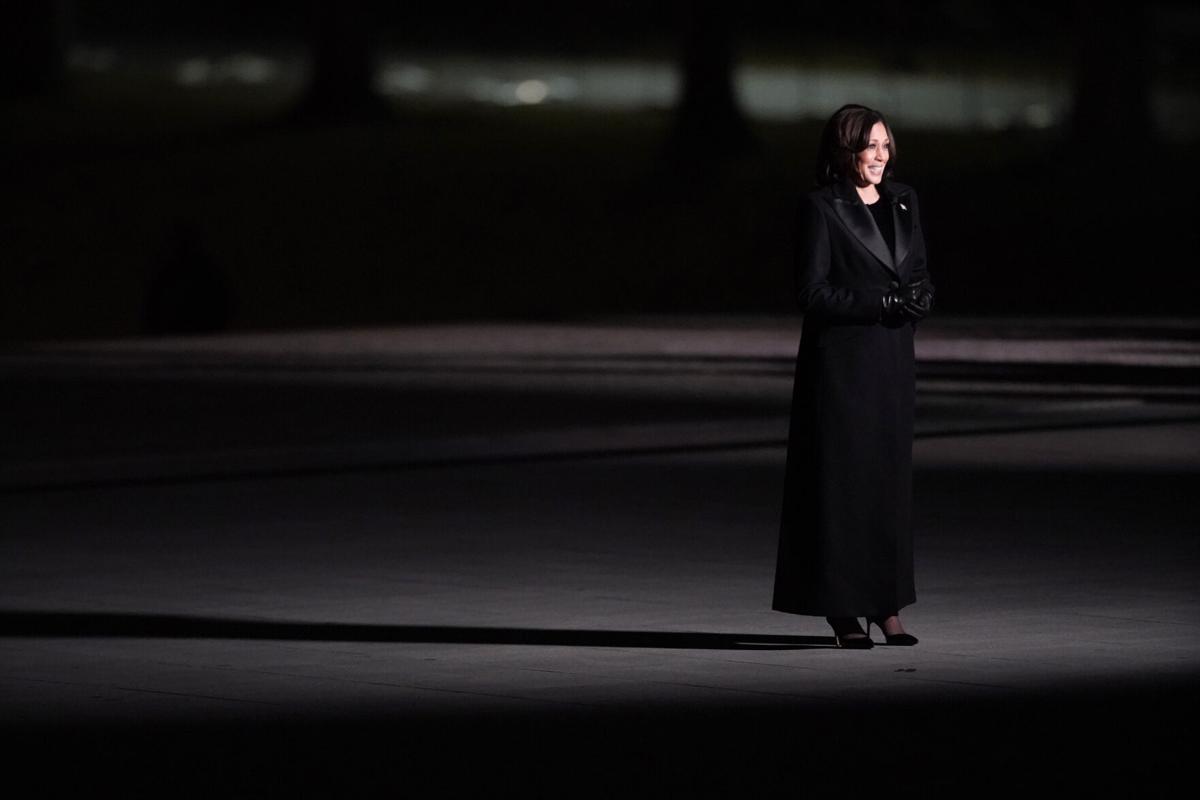 Vice President Kamala Harris addresses the nation at the Celebrating America concert at the Lincoln Memorial in Washington, Wednesday, Jan. 20, 2021, after President Joe Biden's inauguration. She is wearing Sergio Hudson, a fashion designer from Ridgeway. Joshua Roberts/Pool photo via AP 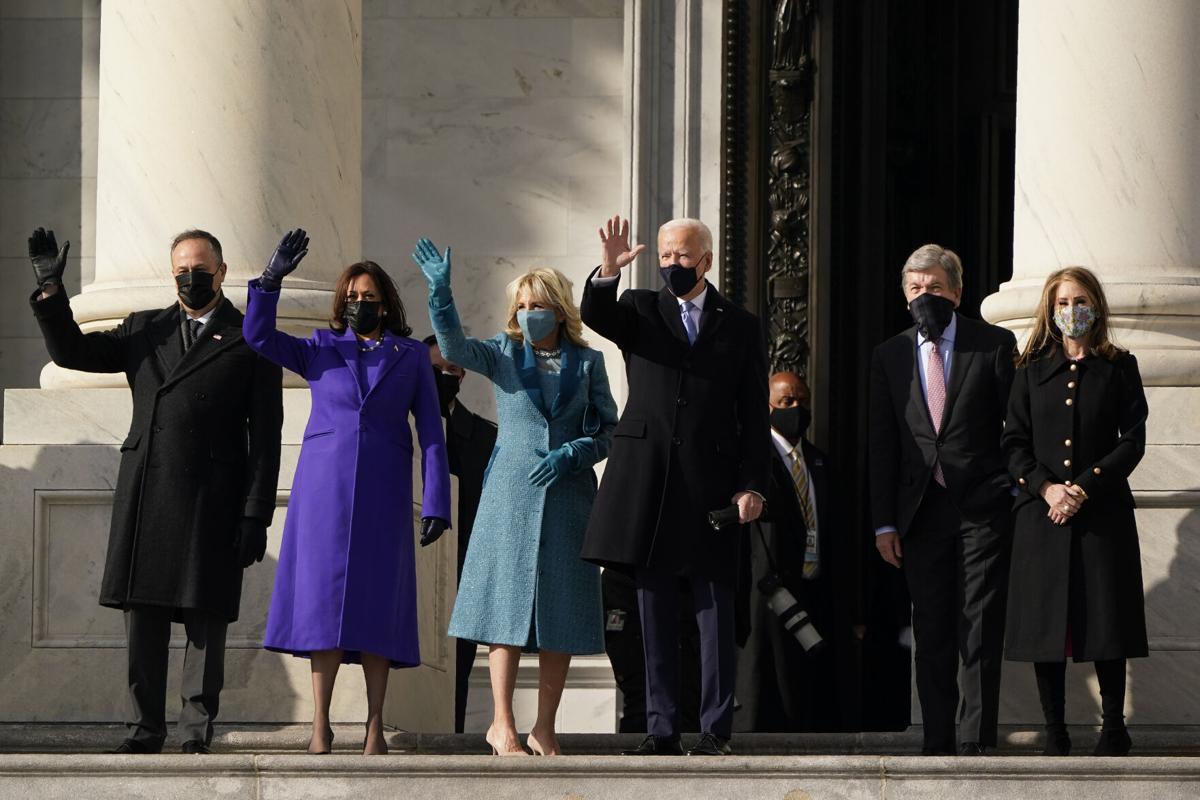 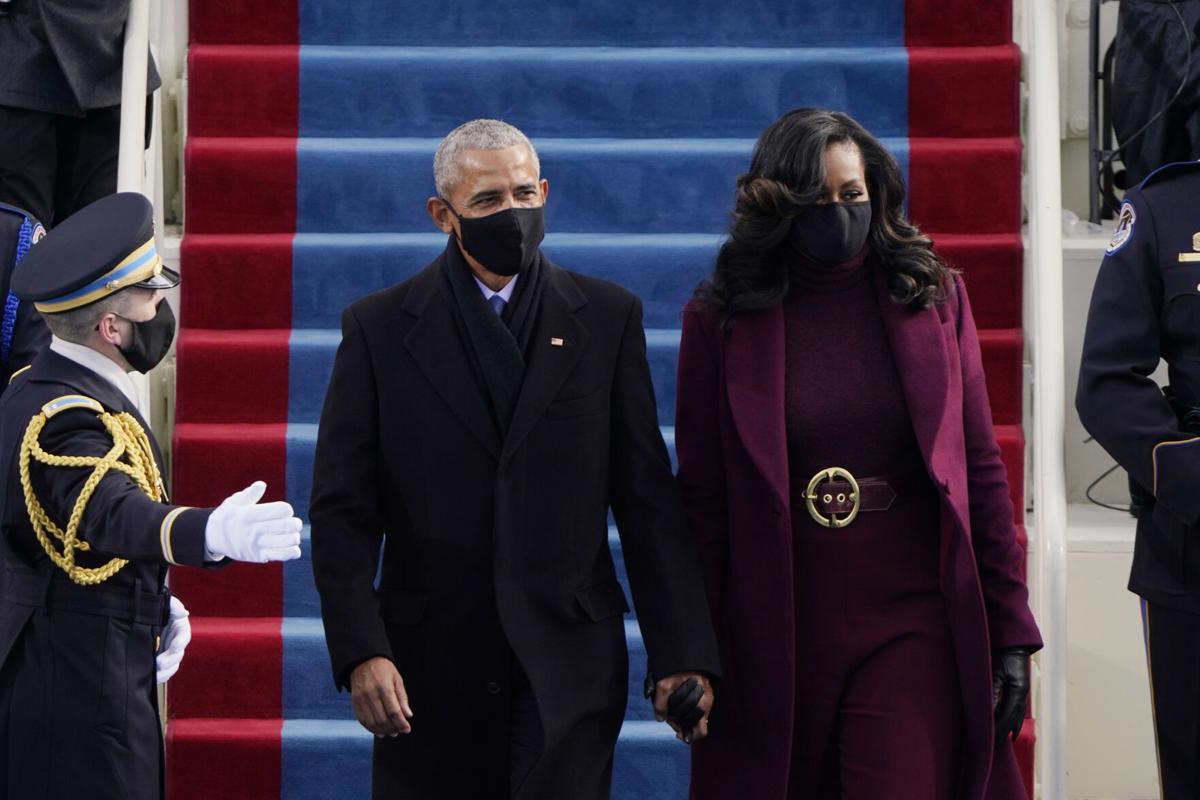 For Inauguration Day, Vice President Kamala Harris wore two outfits made by Black fashion designers, one of whom is from South Carolina.

The outfit she wore at the "Celebrating America" TV special after the swearing-in ceremony — a liquid sequin cocktail dress underneath a floor-length black tuxedo coat with power shoulders — was made by Sergio Hudson, according to his showroom manager Kimberly Rosen.

“We want to be uplifted right now,” Hudson, who made several custom suits for Harris on the campaign trail, told Harper's Bazaar. “So I said, what if we make her something sparkly?”

The outfit former first lady Michelle Obama wore to the inauguration — a plum turtleneck, trousers and coat combination with a gold belt — was also designed by Hudson, according to Rosen.

Vice President Harris: A new chapter opens in US politics

He is originally from Ridgeway, 25 miles north of Columbia.

“I was a normal Ridgeway country boy, my granddaddy had a farm, we ate from the farm,” Hudson told Carolina News and Reporter in 2019. “I didn’t even know how much vegetables cost because I never had to buy any.”

Hudson grew up around fashionable women, who played a big role in his pursuit of design. His mother had a tailoring boutique and wore designer clothes every Sunday for church. His older sister was a runway model.

Hudson attended Bauder College, a design school in Atlanta, and then started working professionally in custom design when he graduated in 2005.

One of his first breakthroughs was in 2009 when he started dressing Lisa Wu from "Real Housewives of Atlanta." Then, he designed Kendall Jenner’s black jumpsuit she wore on her 20th birthday. In 2013, Hudson furthered his career by winning Bravo reality competition TV show, “Styled to Rock,” which was produced by Rihanna.

Since then, Hudson has created custom clothing for Jennifer Lopez, Janelle Monae, Miley Cyrus, Britney Spears and Khloe Kardashian, among other celebrities. Beyonce was seen wearing a piece from his Fall 2019 collection last February.

Hudson, along with Christopher John Rogers from Baton Rouge, shared the honor of custom designing the outfits worn by Harris on the day she became the first woman vice president of the United States.

Though Hudson was credited by several news outlets as a co-creator with Rogers of the the royal purple dress and coat combination Harris was photographed in earlier in the day, he had nothing to do with the swearing-in outfit.

Instead, his time to shine came later in the evening, moments before Katy Perry sang while fireworks lit up the sky behind the Washington Monument. That was when Harris took the microphone on the Tom Hanks-hosted "Celebrating America" broadcast, wearing Hudson's all-black ensemble.

“We kept the silhouette very structured and tailored, because that’s who the Vice President is,” Hudson told Harper's Bazaar. “But the liquid sequins give her glamour and shine, because her influence and the way she’s broken barriers is a light for so many of us. She shines so we can all shine.”

Hudson grew from 50,000 to more than 120,000 Instagram followers overnight because of the attention his looks received on Inauguration Day.

He told Harper's Bazaar he was grateful.

"It’s crazy, right?" he offered. "It means maybe kids can look at me, a Black designer from the South, and say, ‘Oh, Sergio built an American sportswear brand. He loved something, so he studied it until he could do it. If he can make his dreams work, I’ll do it, too.’”

W Magazine reported Harris' purple outfit from earlier in the day, designed by Rogers, was a nod to Shirley Chisholm, the first African American woman to run for President of the United States.

Harris' signature pearls were also meaningful, an ode to her Alpha Kappa Alpha sorority and accessory frequently worn by Harris. At the swearing-in ceremony, she wore pearls by Wilfredo Rosado, a Puerto Rican jeweler who custom-designed the necklace. Many individuals around the country followed suit and wore pearls in celebration of the event.

Symbolism was also achieved through Harris' wardrobe at the COVID-19 memorial service she attended on the evening before Inauguration. There, Harris wore a coat from Kerby Jean-Raymond of Pyer Moss. Jean-Raymond has gathered and dispersed protective gear for hospital workers and provided $50,000 in grants for small businesses affected by the pandemic.