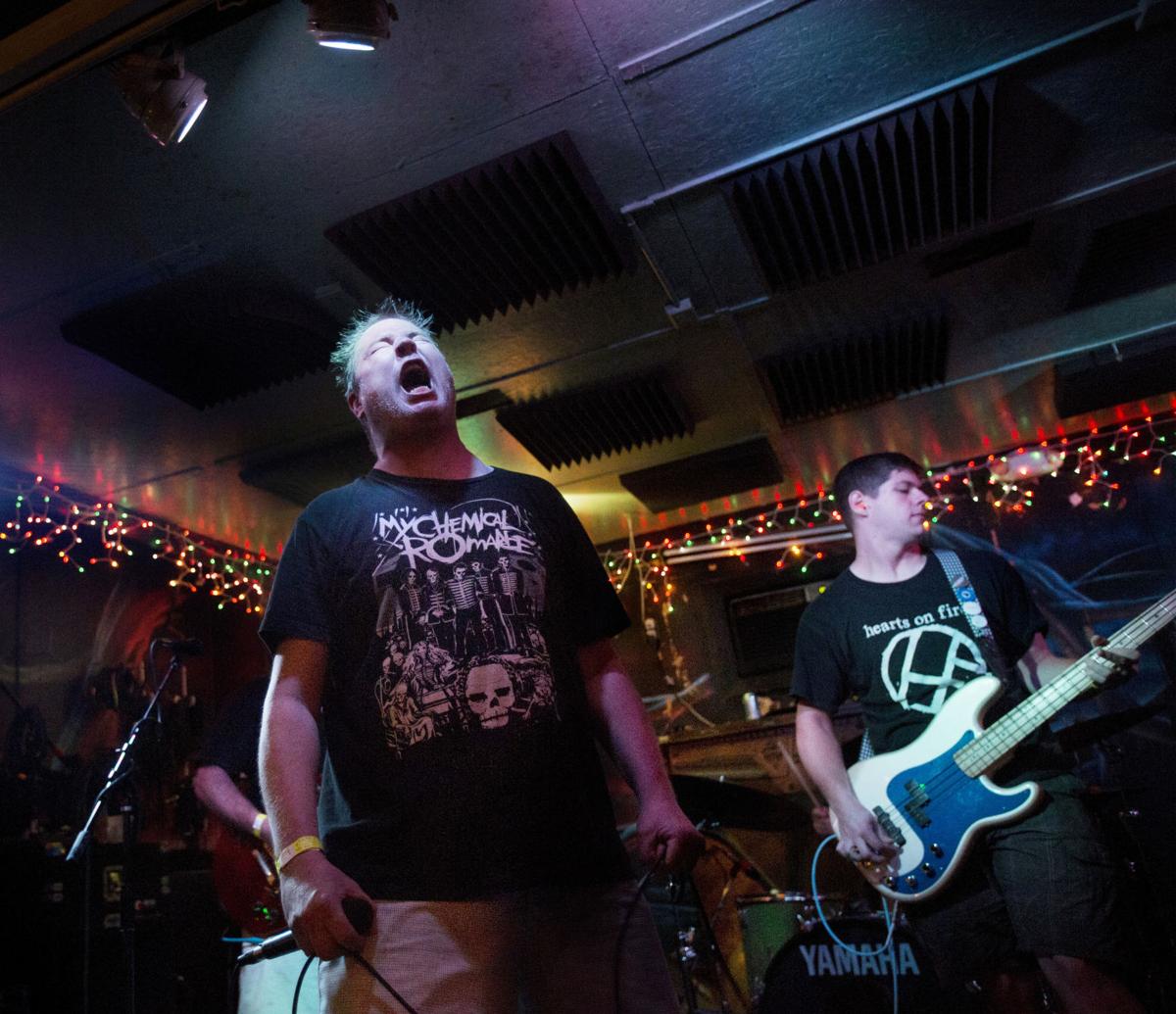 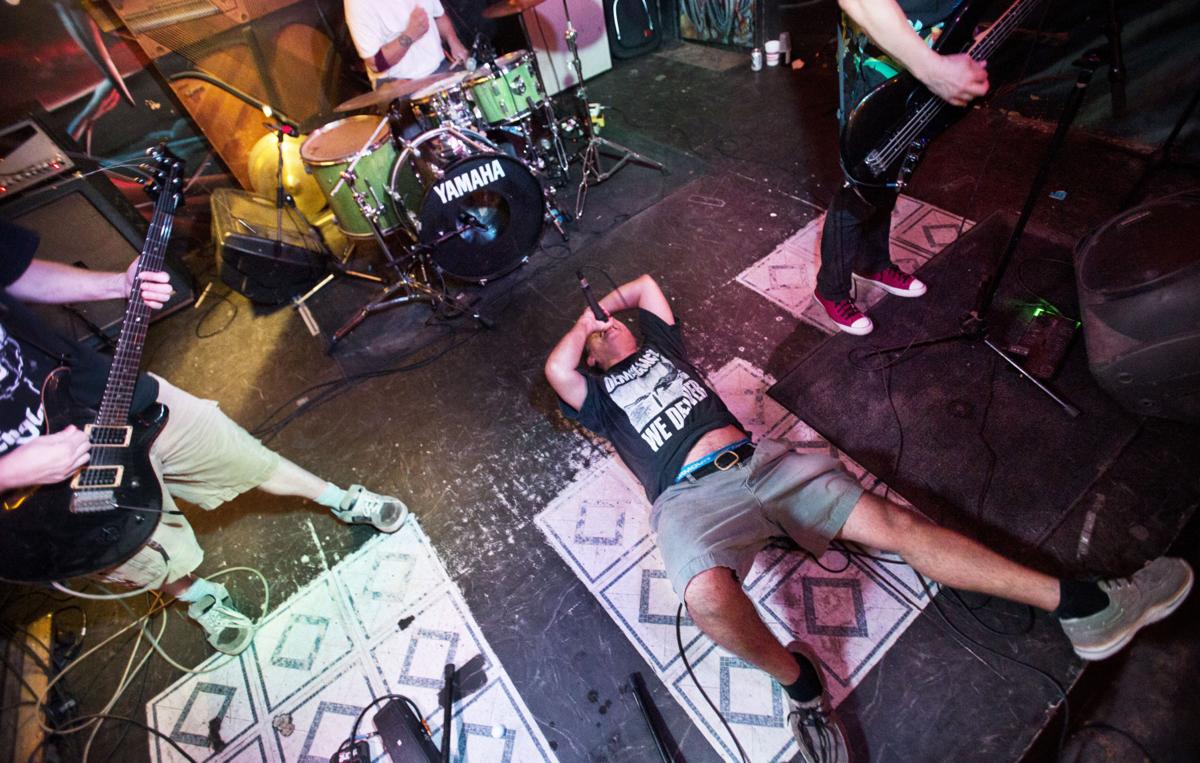 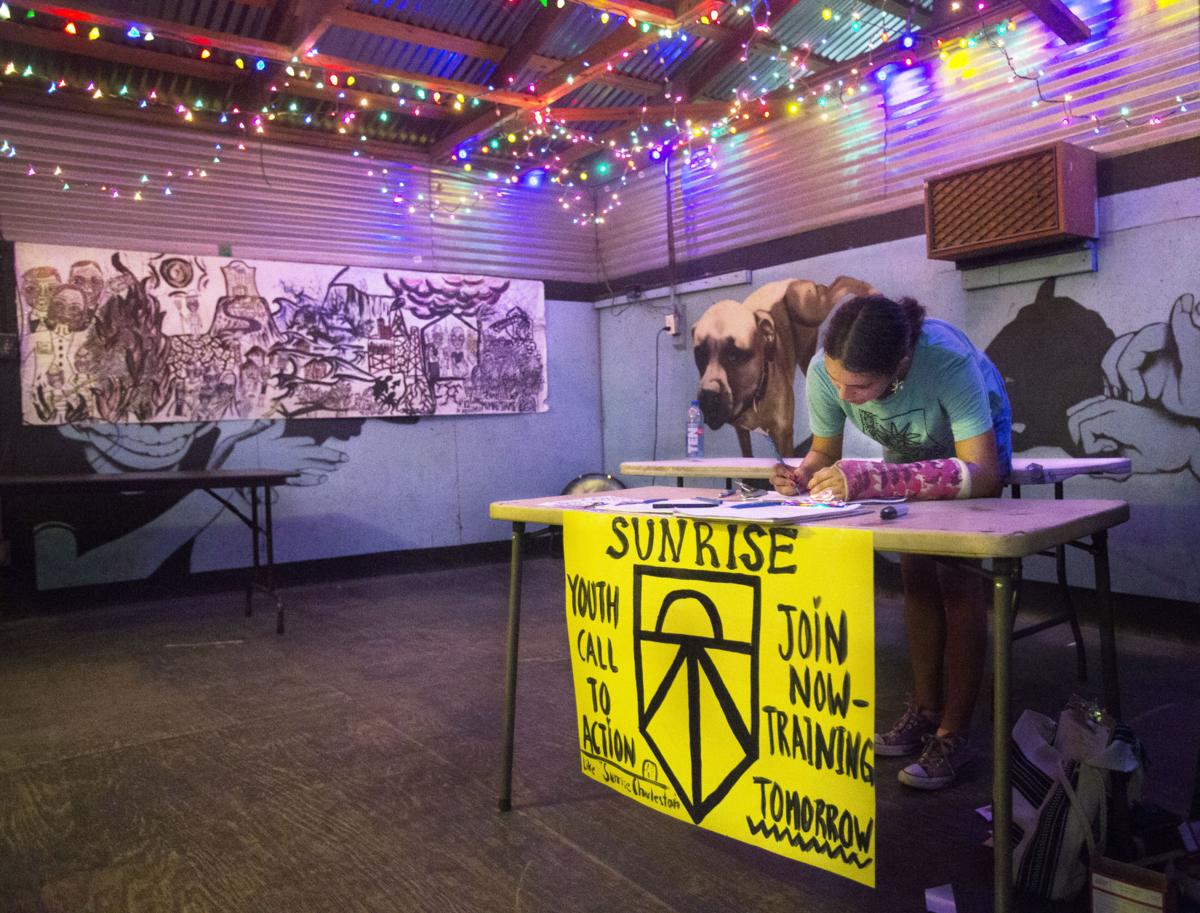 Elena Salinas stands at a table for the Sunrise Movement during a concert to promote climate change at Tin Roof on Wednesday, July 31, 2019, in West Ashley. Gavin McIntyre/Staff 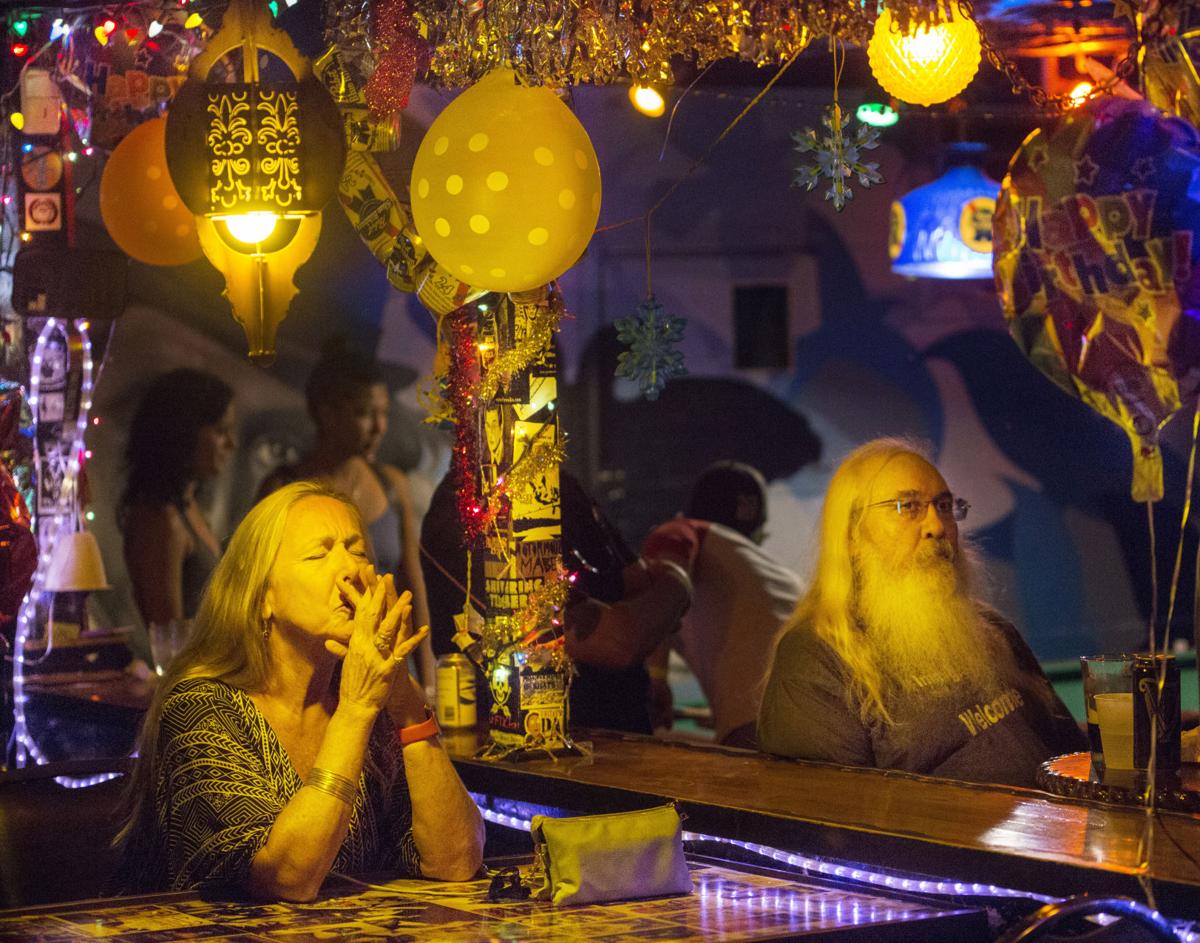 Caroline Keller (left) sings along to Minimum Wage during a concert to promote climate change at Tin Roof on Wednesday, July 31, 2019, in West Ashley. Gavin McIntyre/Staff 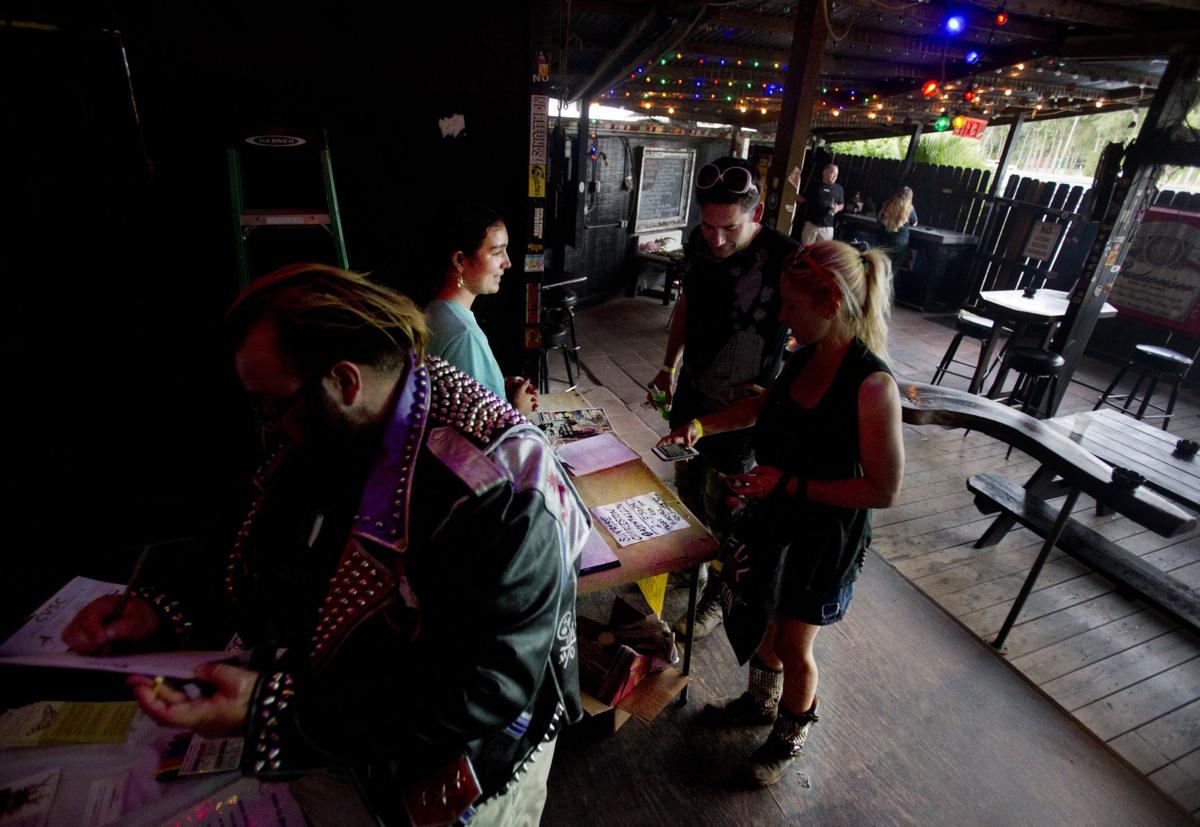 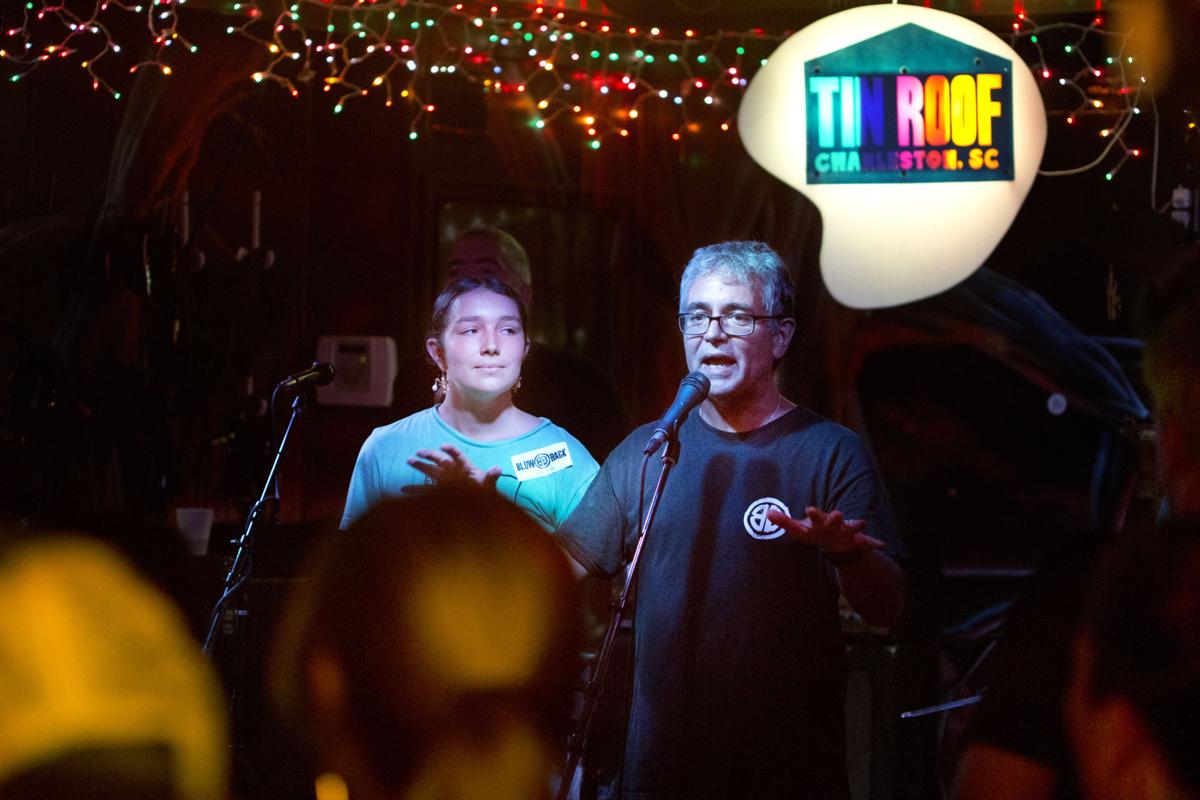 Carlos Salinas, lead singer of Blowback, and his daughter, Elena, talk to the crowd about climate chnage during a concert to promote climate change at Tin Roof on Wednesday, July 31, 2019, in West Ashley. Gavin McIntyre/Staff 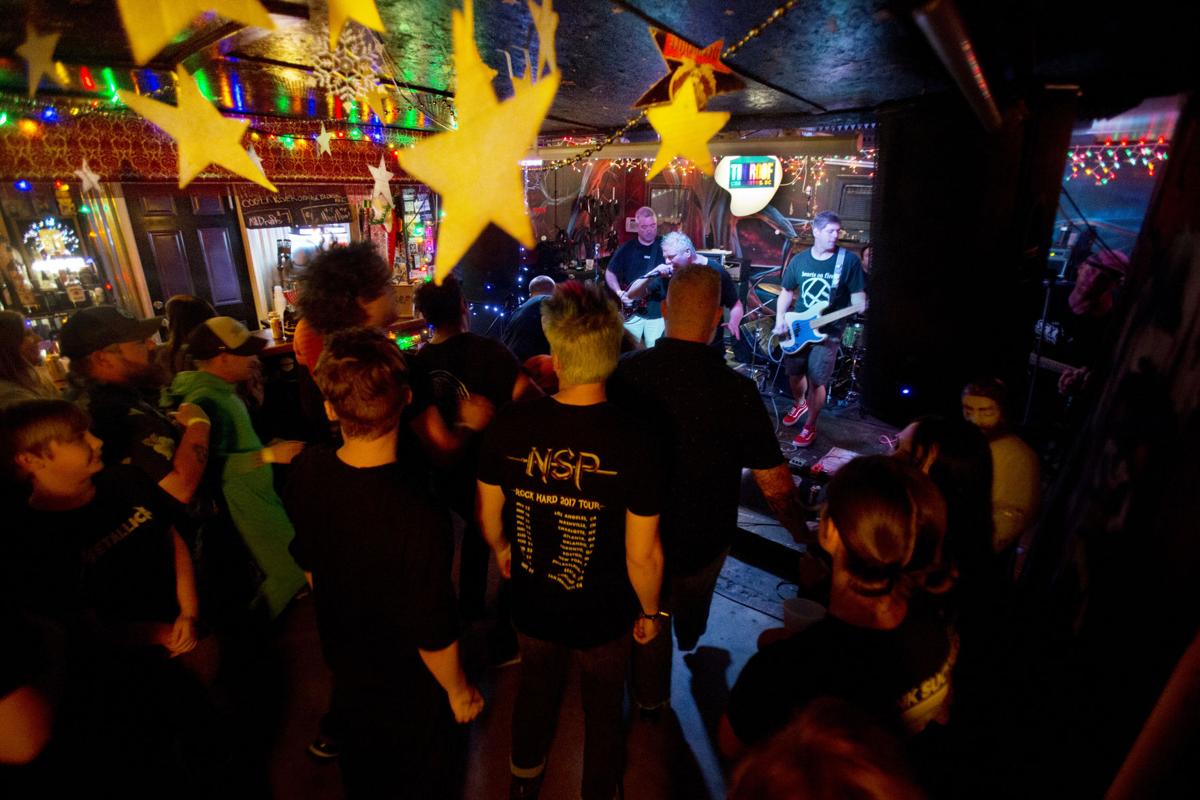 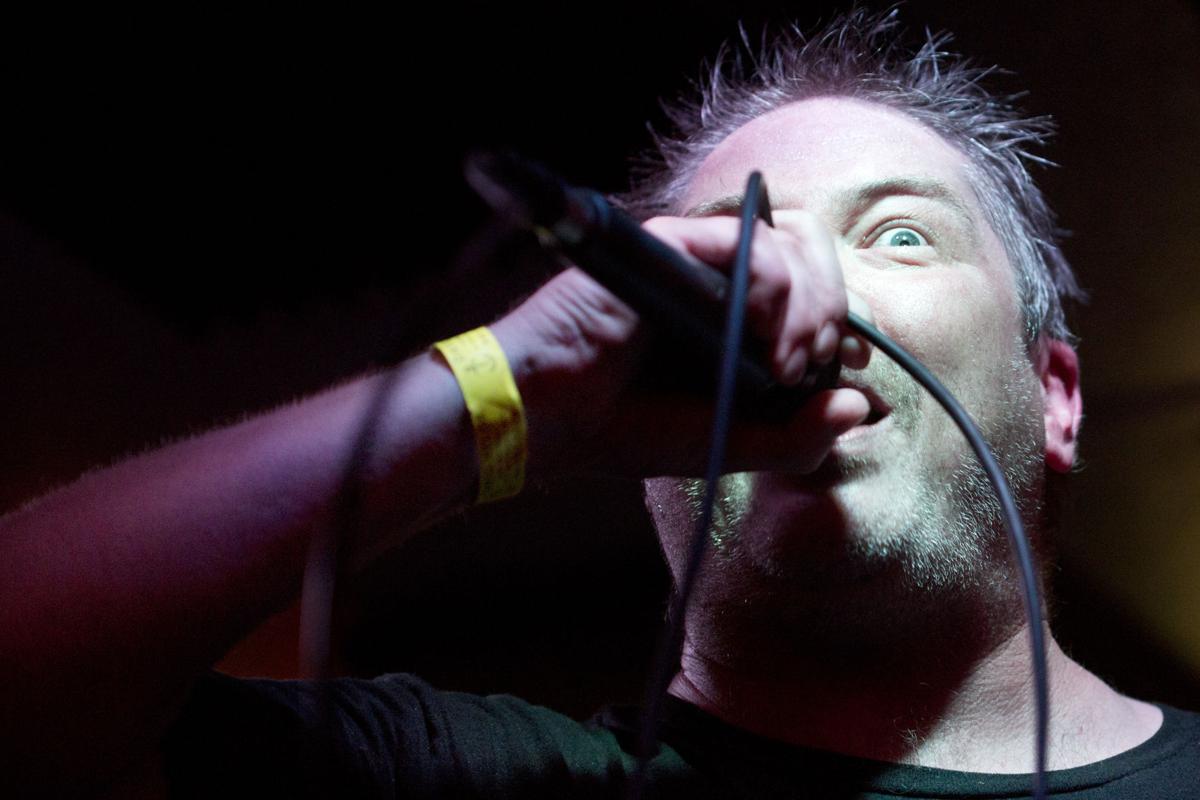 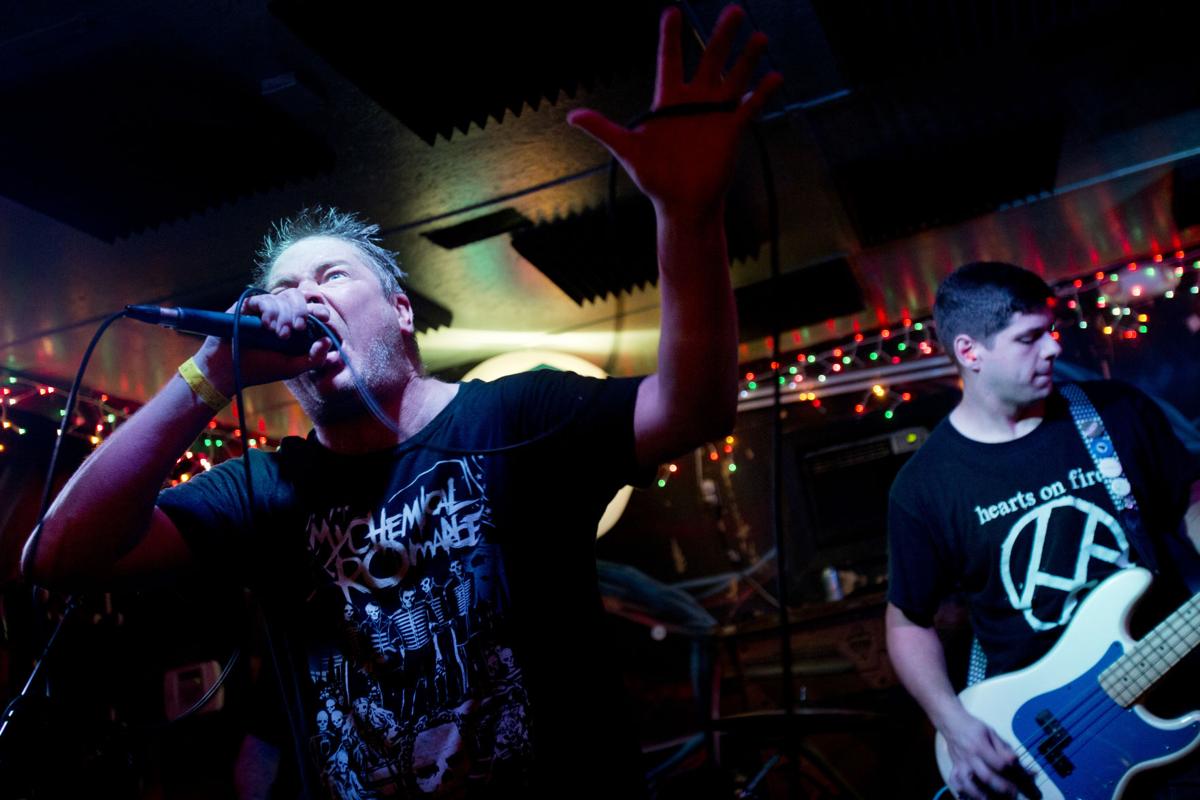 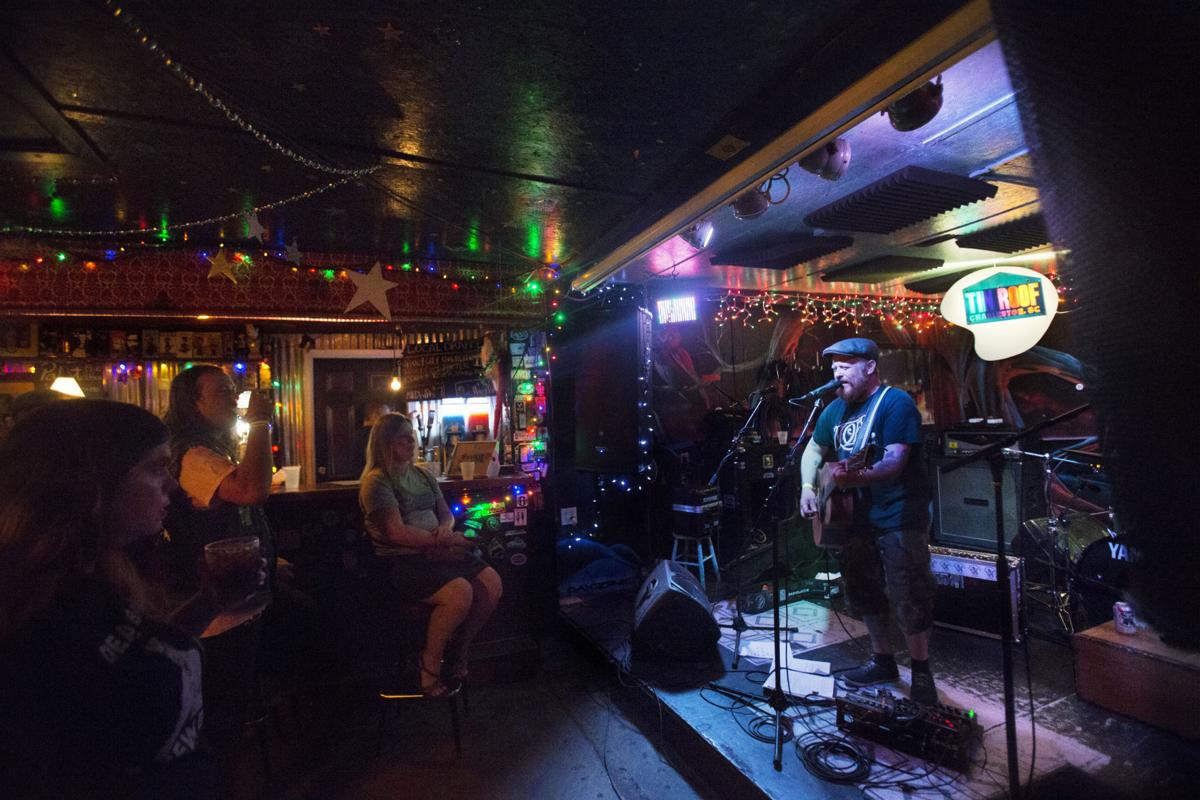 Carlos Salinas, lead singer of Blowback, and his daughter, Elena, talk to the crowd about climate chnage during a concert to promote climate change at Tin Roof on Wednesday, July 31, 2019, in West Ashley. Gavin McIntyre/Staff

Past the PBR wreath and dangling strands of colorful Christmas lights, beyond the glowing Jesus statue on the amp and neon Lite Brite at the end of the bar, is a banner with a panoramic sketch.

Sen. Dianne Feinstein, a California Democrat, pours kerosene onto a blazing fire that's left a neighboring farmer and his surrounding community in drought. Starving people look up at a mansion where a man lounges comfortably on his lawn. Above, penguins sit on an iceberg that's melting and causing a nearby village to flood. Below, a scuba diver swims in the ocean alongside plastic and garbage, as sea creatures try to escape. Big oil drips toxins into a family's water supply as the TV screen reads, "The president is fighting for you."

Her booth on the outside patio boasts a bright yellow poster with "Sunrise" in Sharpie all-caps. Through an open door to the inside stage, a kid is crowd surfing as Charleston-based band Blowback plays "Greed Runs the Clock."

'We're using music for a purpose'

Salinas is trying to start a local chapter of the Sunrise Movement, a youth-led organization that advocates for political action on climate change. The movement supports the Green New Deal, an economic stimulus package that aims to address climate change and economic inequality.

Charleston, on the front lines of climate change, should do more, says Salinas, whose role in the Sunrise Movement is on the art team. It's where music and politics collide.

"Art is really powerful, because it captures people and is really uniting," she says. "I've noticed that especially with music. You can be a liberal moshing next to a guy in a MAGA hat, and you don't talk politics. You're just there in the moment. It makes people realize they have more in common than political labels or ideologies."

Xiuhtezcatl Martinez, 19, is among a growing number of nationally known artists addressing climate and conservation issues. The indigenous activist and rapper, along with 20 other under-20-somethings, sued the United States government over climate change in 2016 for violating the youngest generation’s constitutional rights to life, liberty and property.

“We’re using music for a purpose," Martinez told The Post and Courier during an interview in March 2018. "It’s important to tell the stories and negativity that’s going on in the world and then show we can come out on the other side of those challenges and provide an opportunity for a change.”

It's not unusual for musicians to support social or political causes. Protest songs long have been part of our country and other countries' musical soundtracks, especially during times of conflict, struggle and heightened injustice. Consider Woody Guthrie's "This Land Is Your Land," Billie Holiday's "Strange Fruit" or U2's "Sunday Bloody Sunday."

In 1985, Quincy Jones and Michael Omartian produced "We Are the World," written by Michael Jackson and Lionel Richie and performed by dozens of music superstars. The record raised more than $63 million in humanitarian aid to Africa. Other large-scale music events, such as BandAid and FarmAid, similarly provided musicians a chance to engage with real-life problems.

Celebrities taking a public stance on climate change include more than musicians. Leonardo DiCaprio, Brad Pitt and Robert Downey Jr. are among several actors who do more than talk the talk.

Punk music, in particular, has been a force of political protest since the '60s.

Carlos Salinas, the lead singer of Blowback and Elena's dad, moved from Charleston to Washington, D.C., to work with the Colombian Kofan people to preserve their environment and culture. For him, music always has been a way to start a political conversation.

Some of Blowback's "activist punk" songs include "A Brief History of Genocide," "Gotta Resist" and "Drug War." The band's 2019 EP "Great Again" has a photo of the U.S. Capitol Building on the front cover. It's not subtle.

His "A Water Album" used the central theme of water to express his emotional growth as a black person, relationship to nature and socio-economic views regarding Charleston and climate change.

Since performing the album live at the Charleston Music Hall last September, Starr has joined activists in emailing the Army Corps of Engineers and Department of Health and Environmental Control in opposition to a project that will fill in Gadsden Creek and enable the expansion of the WestEdge development. DHEC scheduled a public hearing for 6-8 p.m. Wednesday at Burke High School.

That's one example of how music activism can influence political change.

"When you go to a show and the theme is water and there's flooding photography on display, you realize, 'Oh wait a minute, there’s a line of connection between the art world and the community of activism and advocacy. Why are we not working together?'" Starr says.

Because of his "A Water Album" and his activism regarding Gadsden Creek, Starr was selected to attend the annual U.S. Water Alliance summit in Austin, Texas, in September, where he will address Charleston's flooding issues.

Public hearing scheduled for Aug. 7 on proposal to fill in Charleston's Gadsden Creek

"More artists have been understanding their power and the social capital we wield, and they're realizing they need to connect with the people who study these issues we're passionate about, who dedicate their lives to this work," Starr says. "We cannot be afraid to seek their council."

Kelly Thorvalson, conservation programs manager at the South Carolina Aquarium, was at Tin Roof on Wednesday night. She distributed handouts detailing Aquarium programs and an interactive science app that features a sea level rise tracker and explains the threat of plastic pollution.

"I'm from South Carolina," Thorvalson says. "I love this state and want to help find solutions to the environmental issues we’re facing. The conservation movement is extremely active and important here."

The punk show is just one of many events she will attend this year to spread the message.

"It's important to connect to all audiences," she says. "It's going to take us all to figure out these issues."

"There’s always been something going on here since the early '80s," Salinas says. "People here are funky, they have a can-do attitude, there’s a rebellious streak. It's a hot bed for activism, so let's get it activated."

Underneath a black ceiling coated in punk show posters, dozens of kids, 20-somethings, and even parents and grandparents, head-banged and moshed to punk music together. There was someone in a suit, someone with pink hair, someone in a button-up and fedora.

Some of them held flyers about the Sunrise Movement, Conservation Voters of South Carolina and the S.C. Aquarium, all which had booths on the patio.