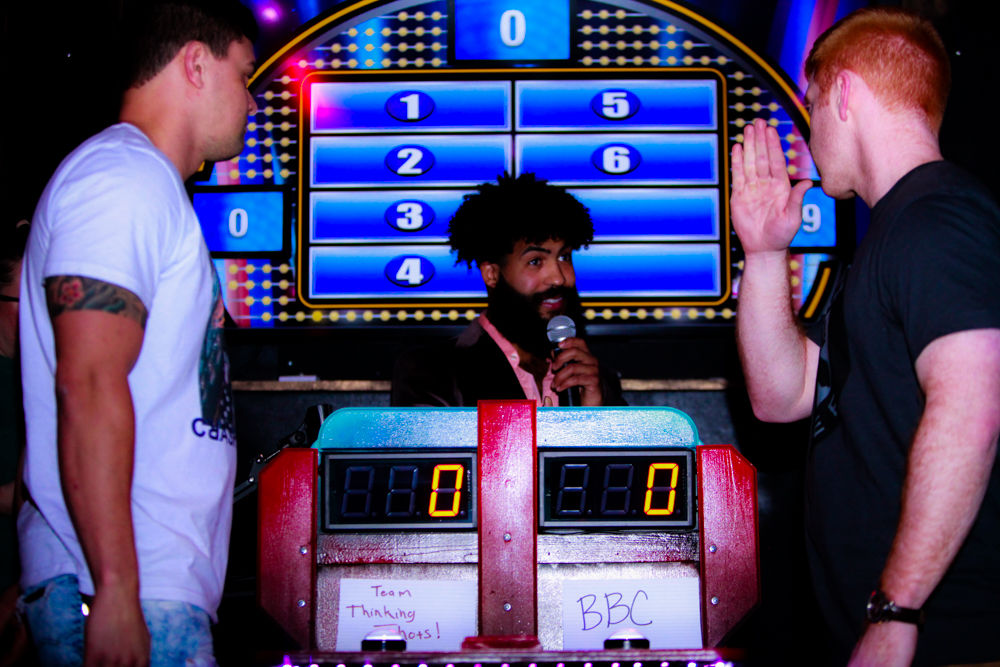 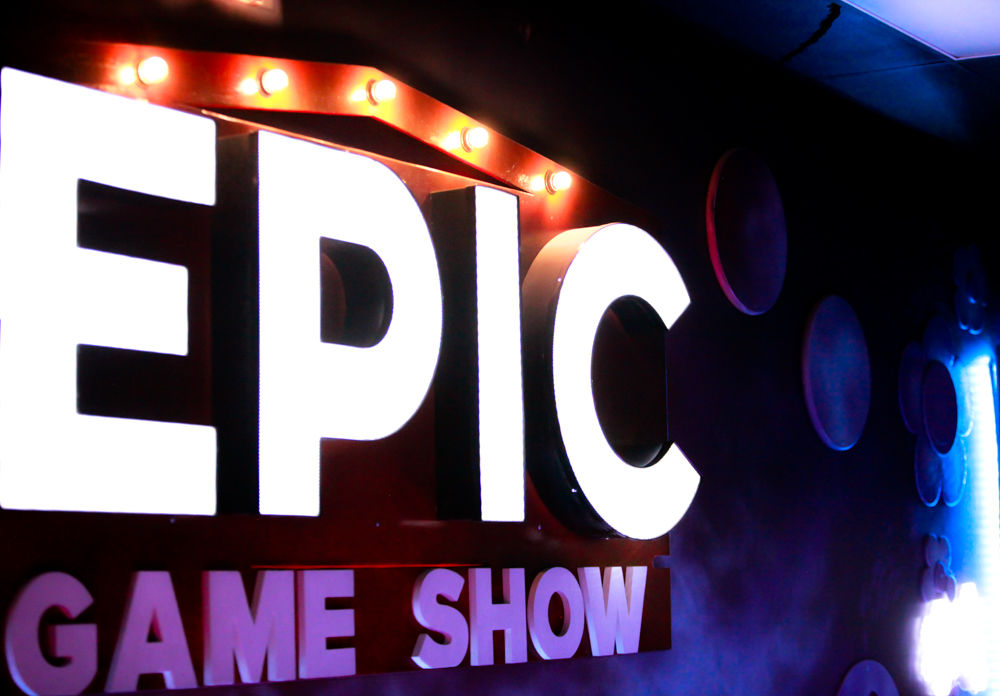 A new entertainment venue based on TV game shows is now open in Mount Pleasant. Provided 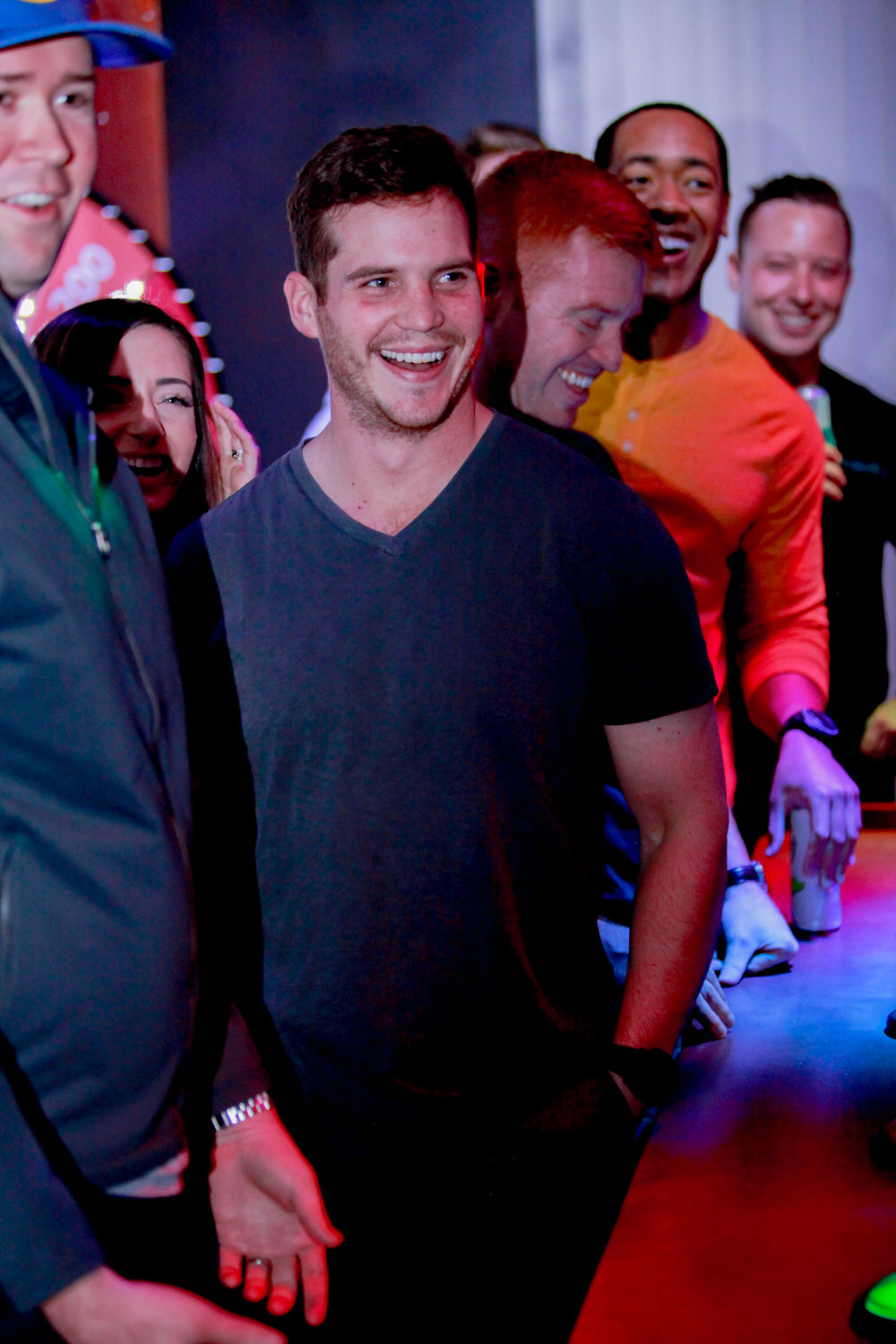 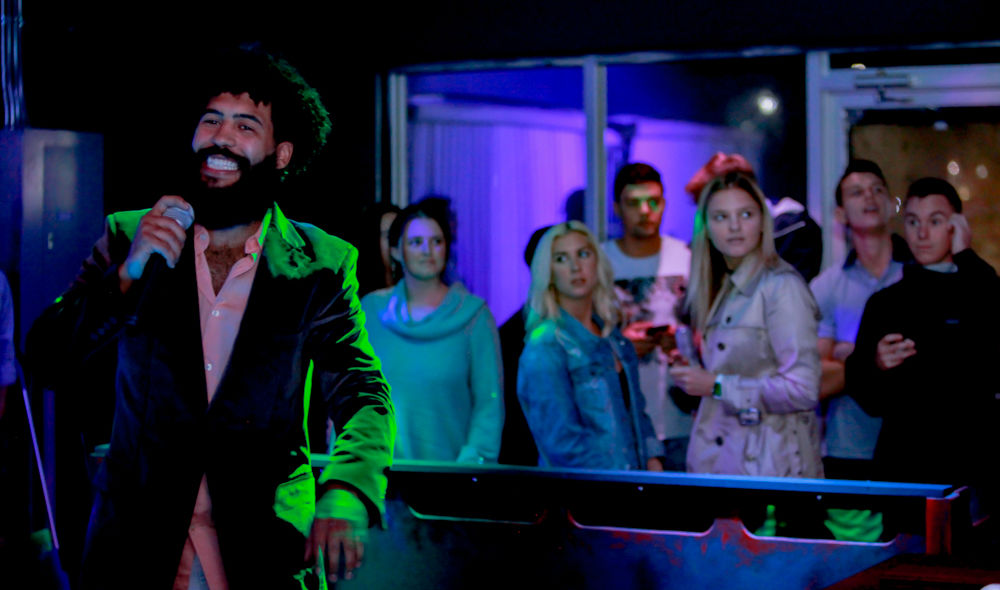 Come on down! The Epic Game Show Experience is now open in Mount Pleasant, and host Cameron Overstreet is ready. Nicholas Overstreet/Provided 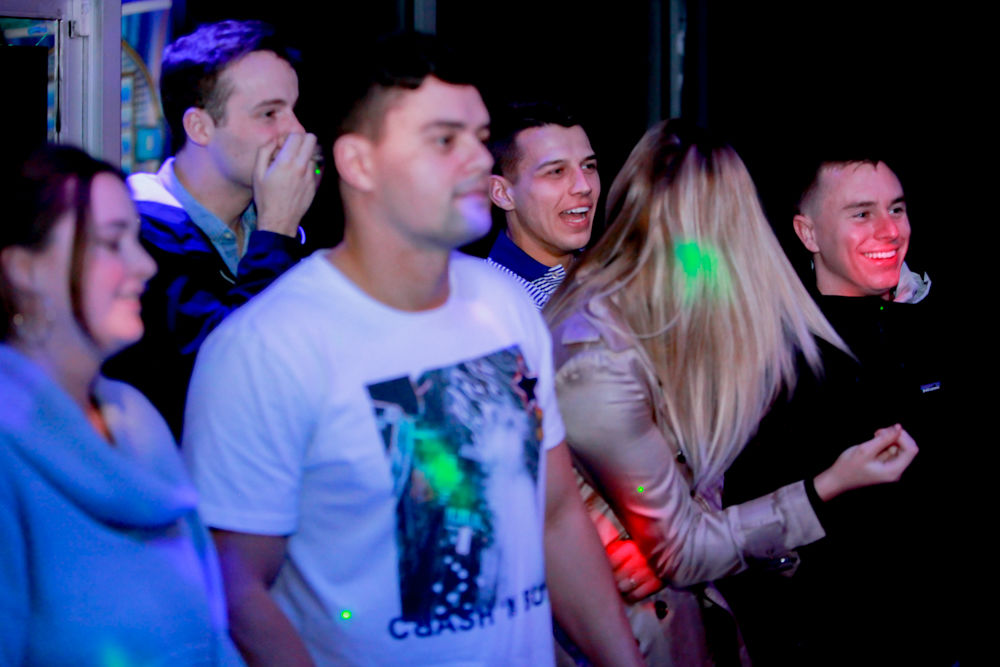 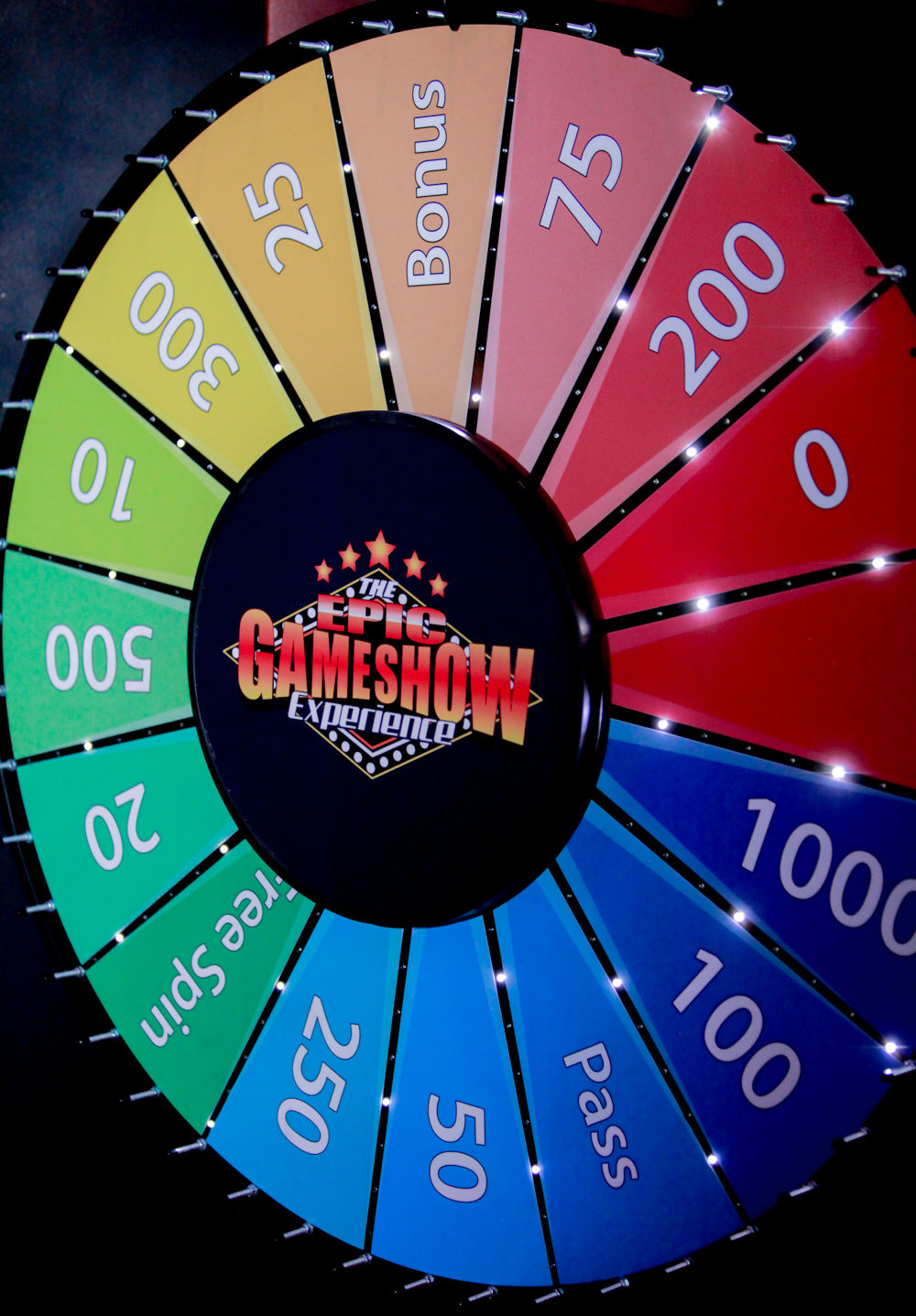 The Epic Game Show Experience wheel is spun to determine additional points for each team when a challenge is met. Nicholas Overstreet/Provided 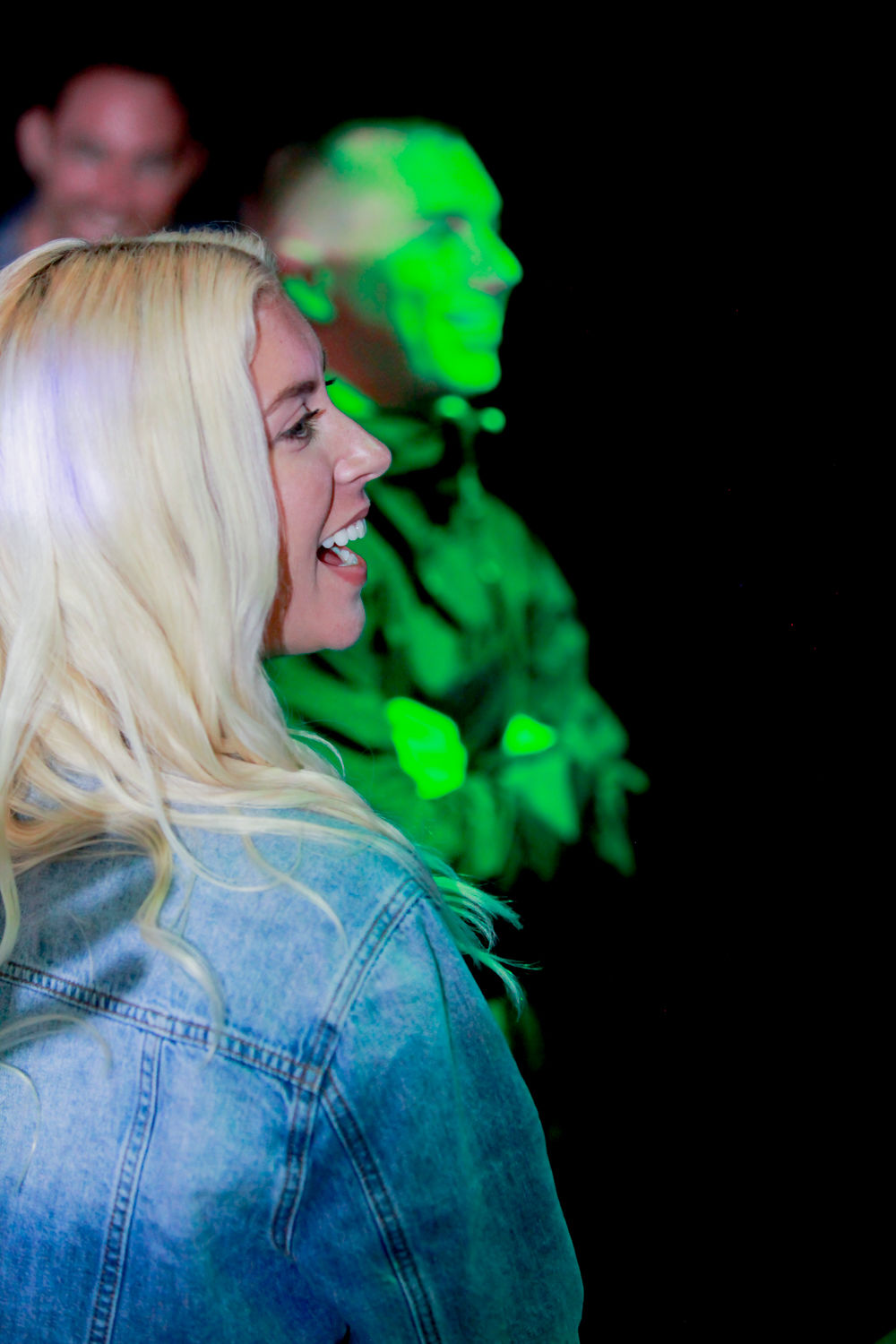 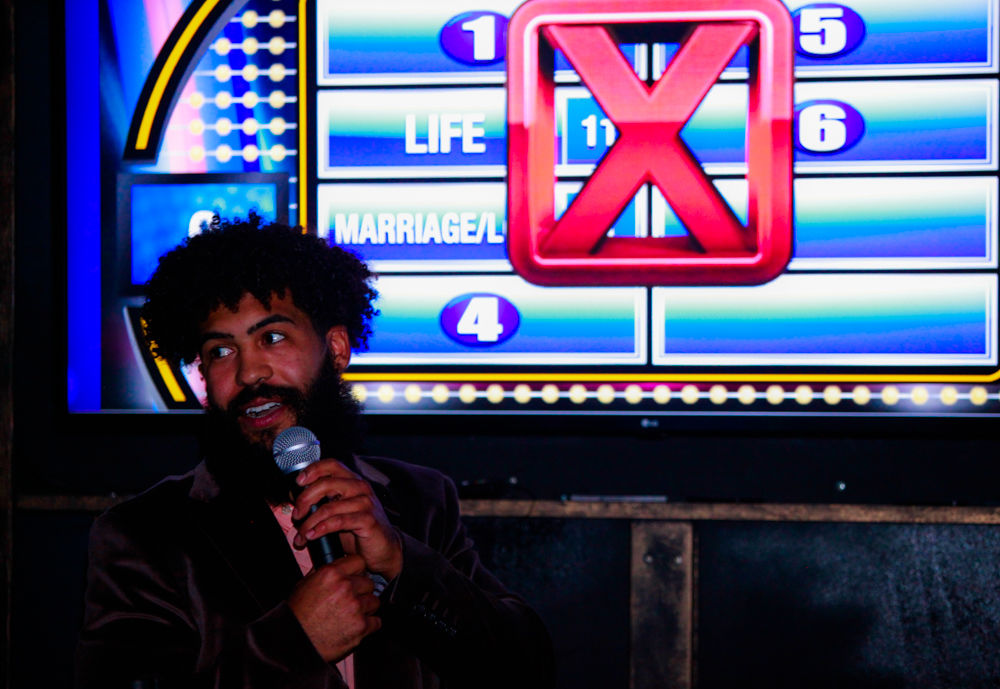 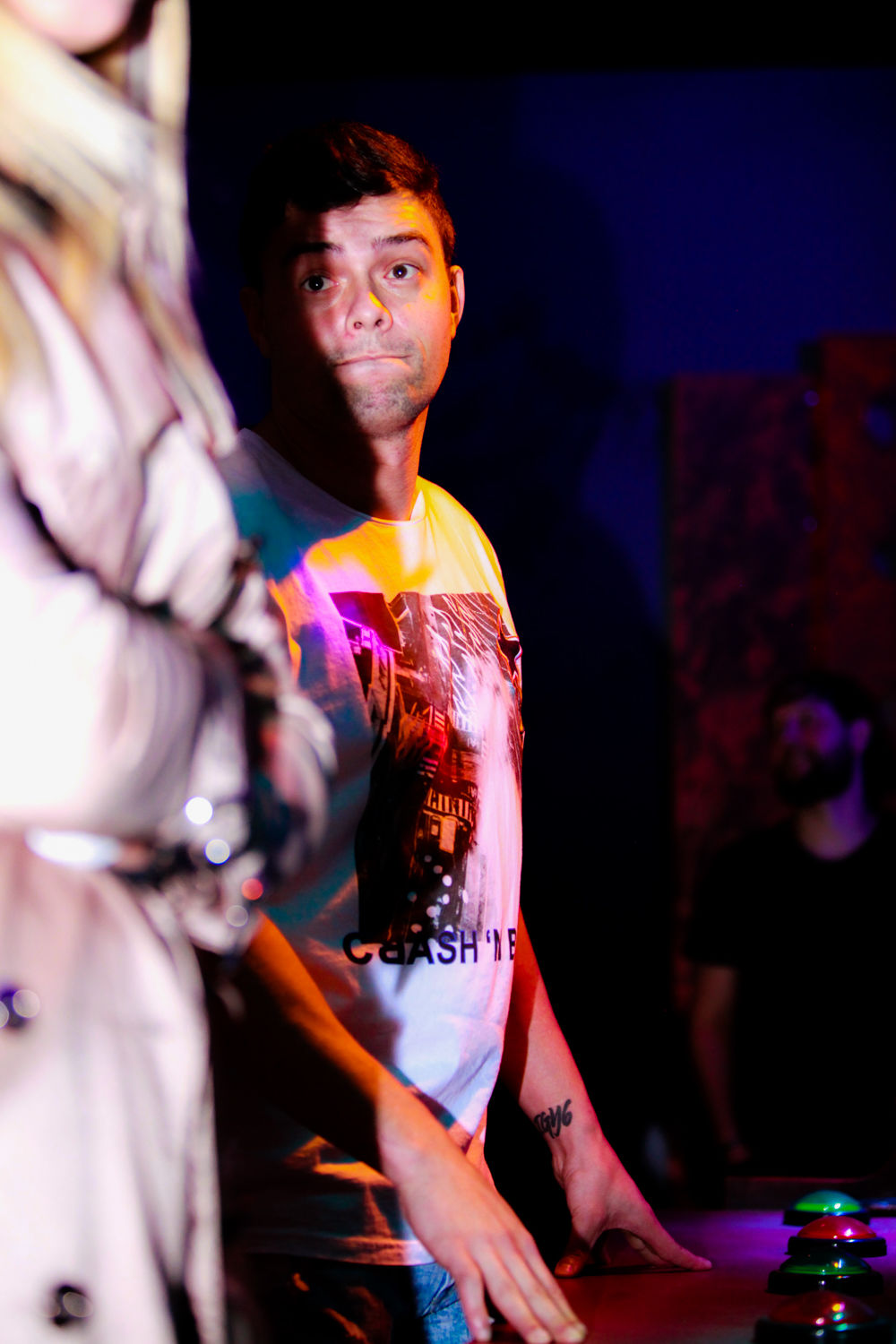 Justin Brittingham is poised to answer a question. Nicholas Overstreet/Provided 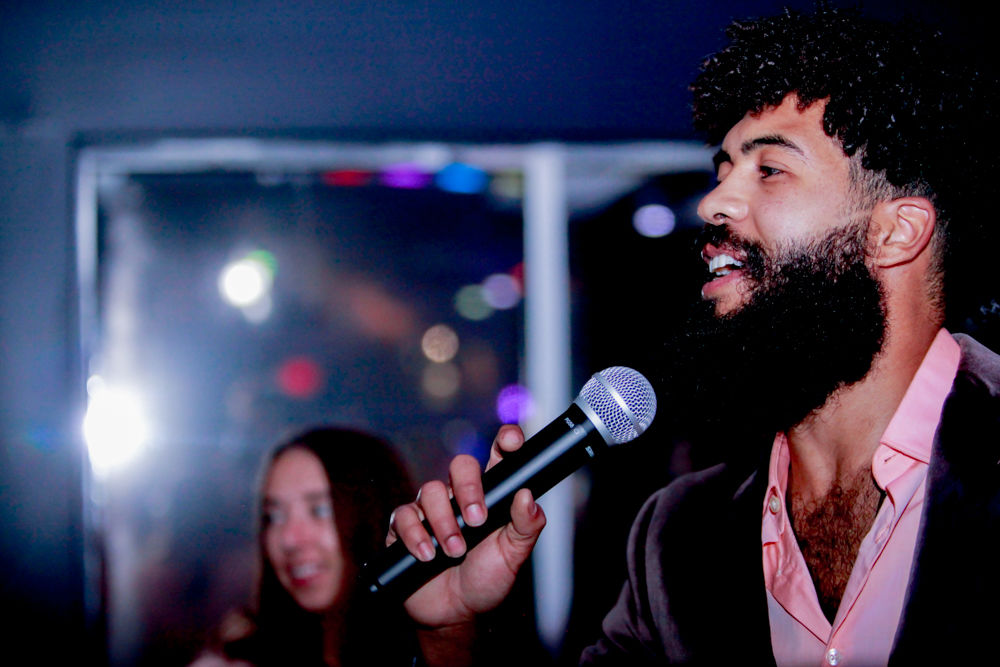 Cameron Overstreet is the host at The Epic Game Show Experience. Nicholas Overstreet/Provided 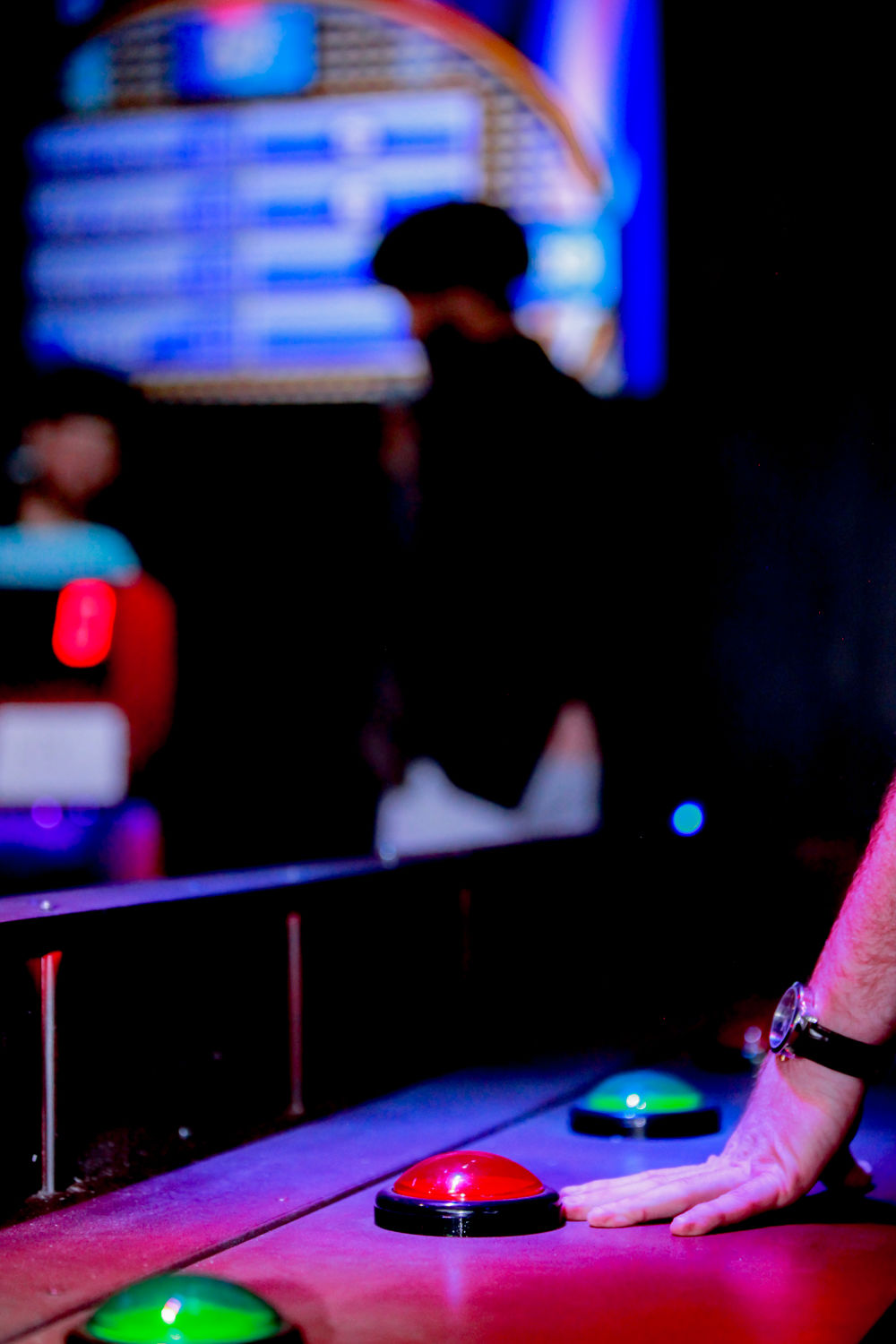 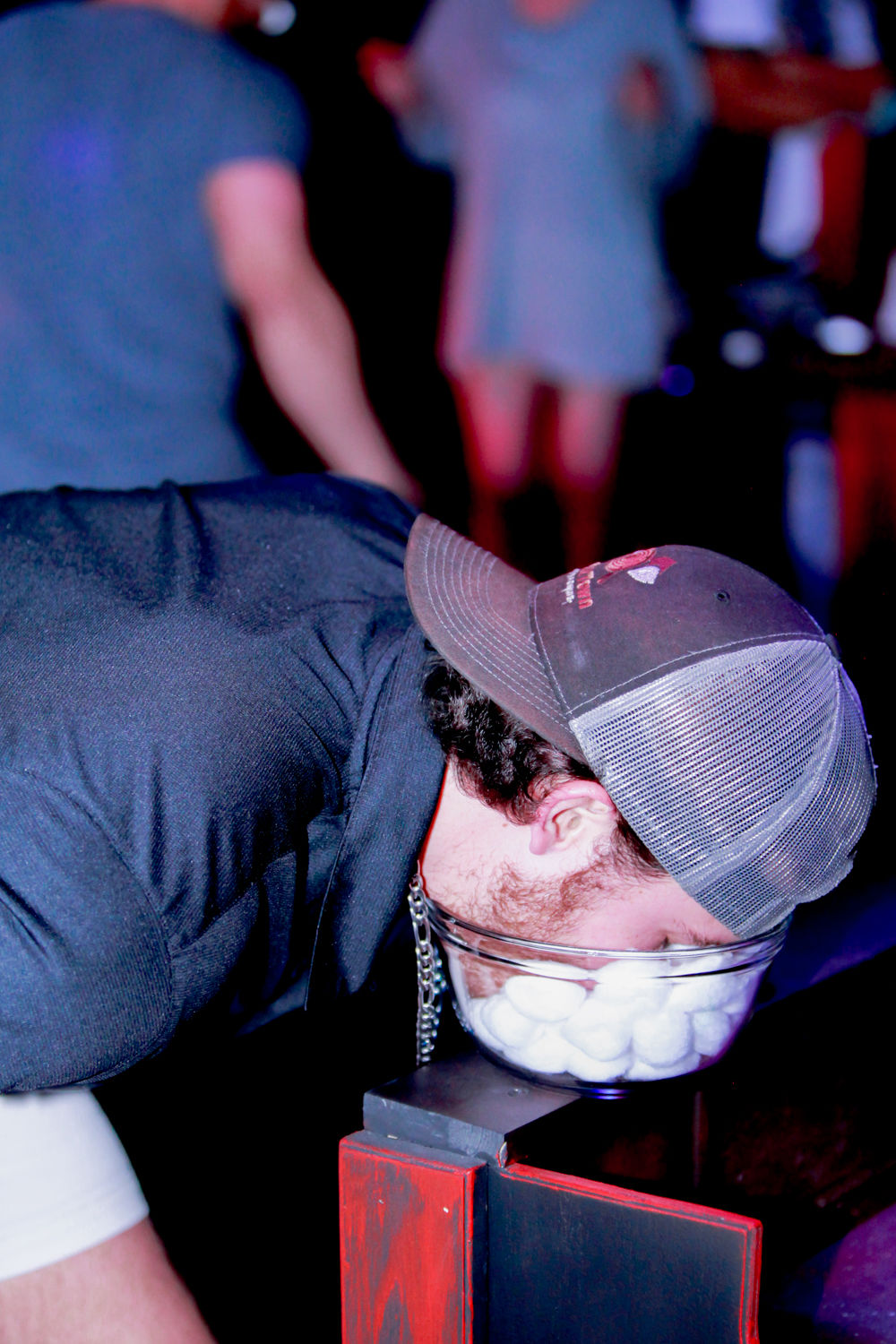 Rhett Miller is challenged to transport cotton bolls via petroleum jelly on his nose from one bowl to another during a "Minute to Win It"-type game. Nicholas Overstreet/Provided 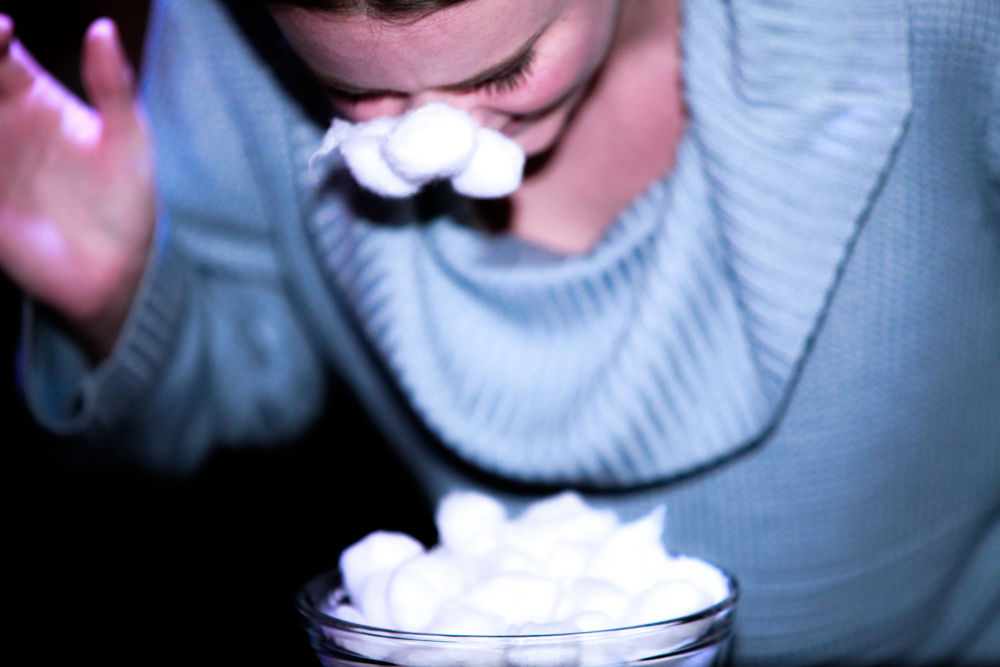 Hannah Leigh sticks cotton balls to her nose during a challenge. Nicholas Overstreet/Provided 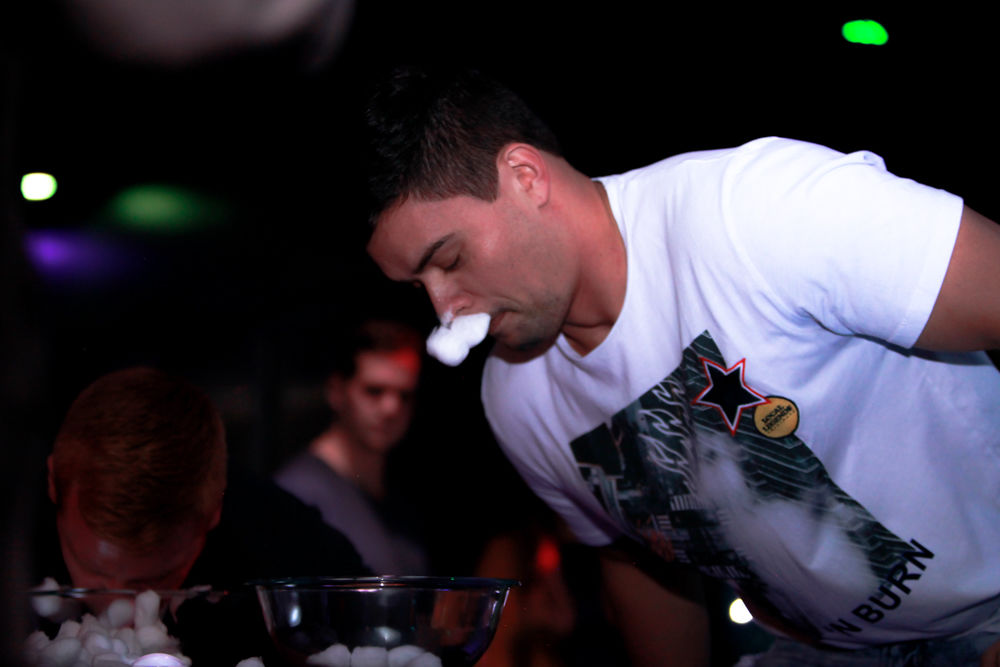 Justin Brittingham lowers cotton balls from his nose into a bowl during a game. Nicholas Overstreet/Provided 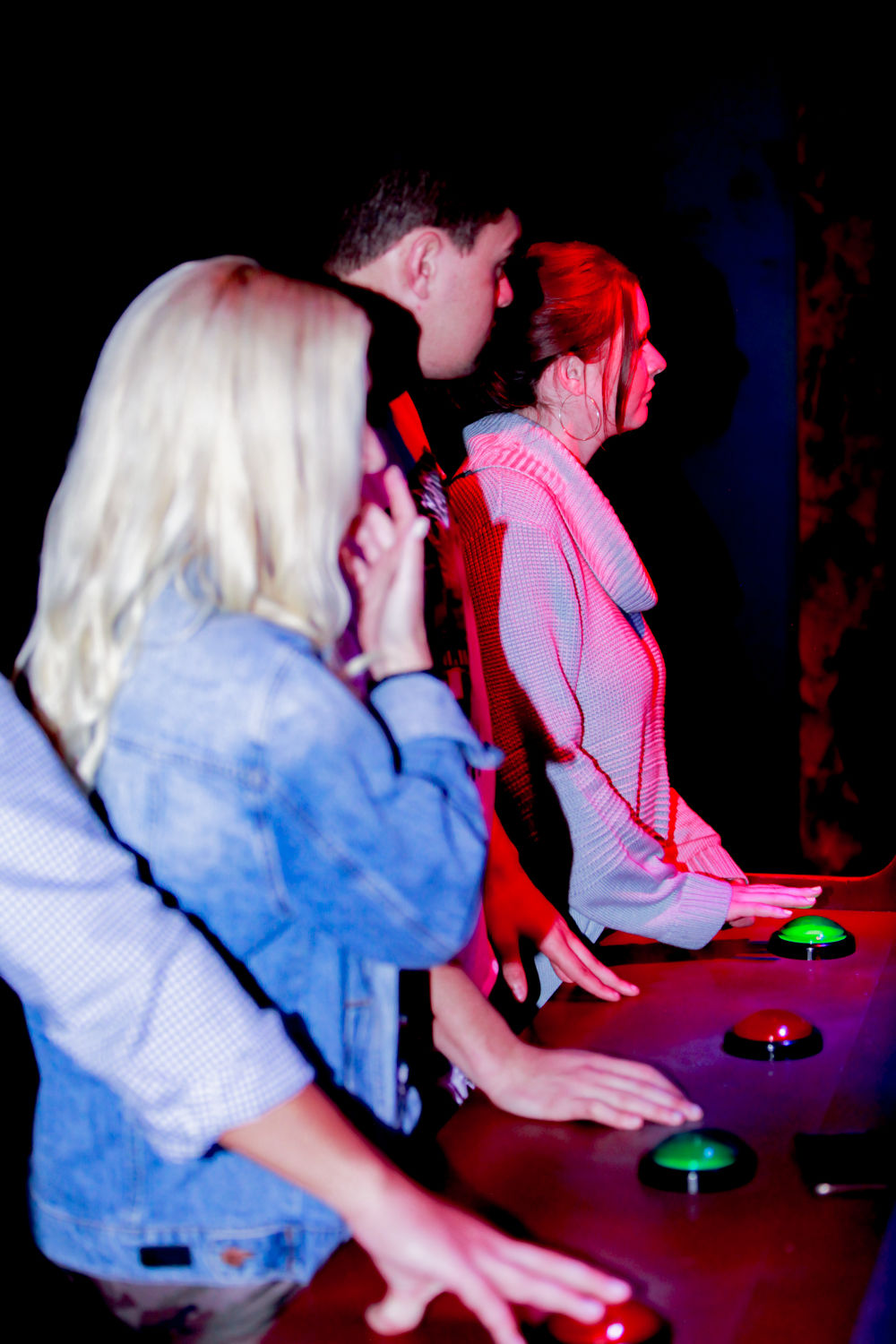 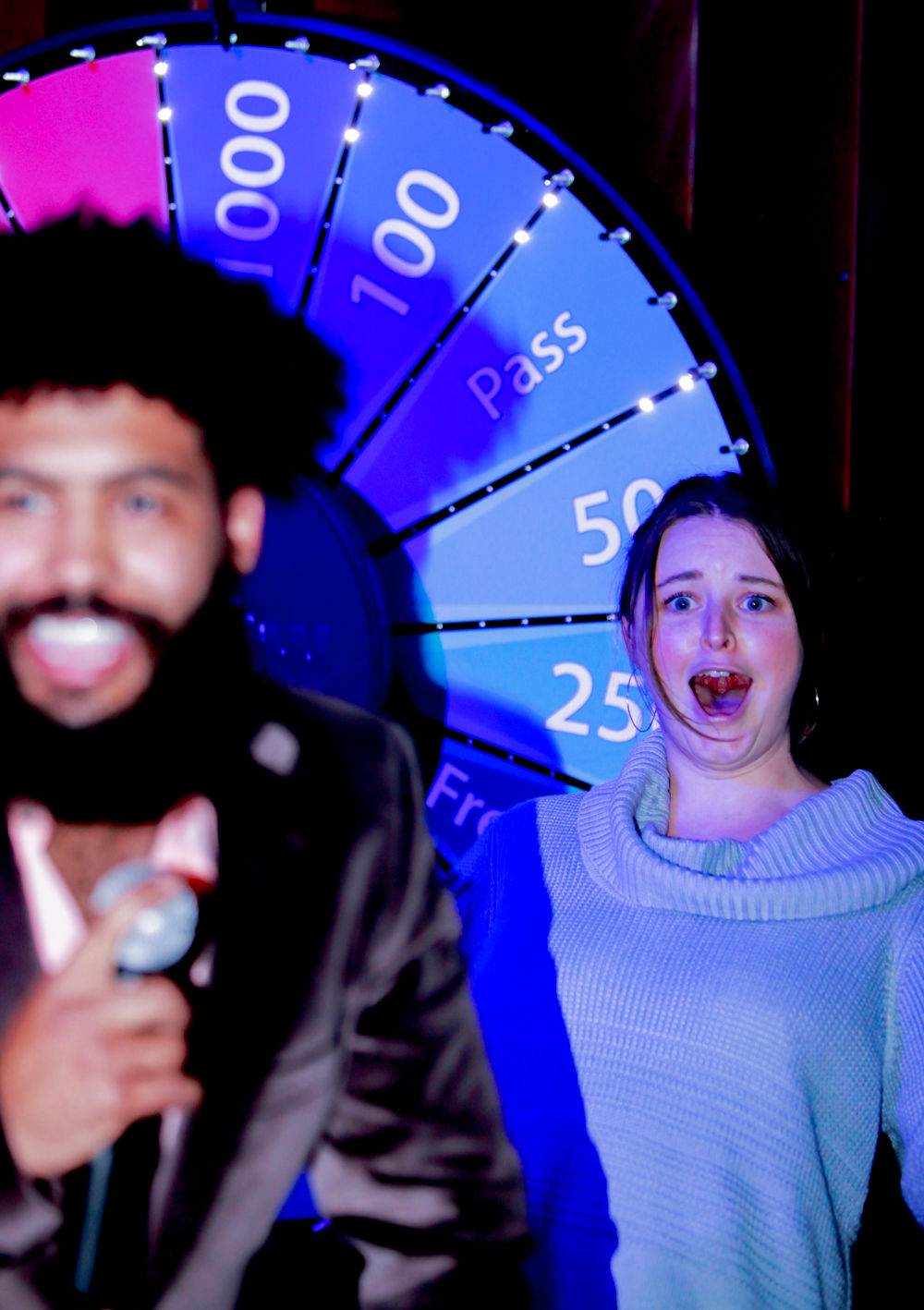 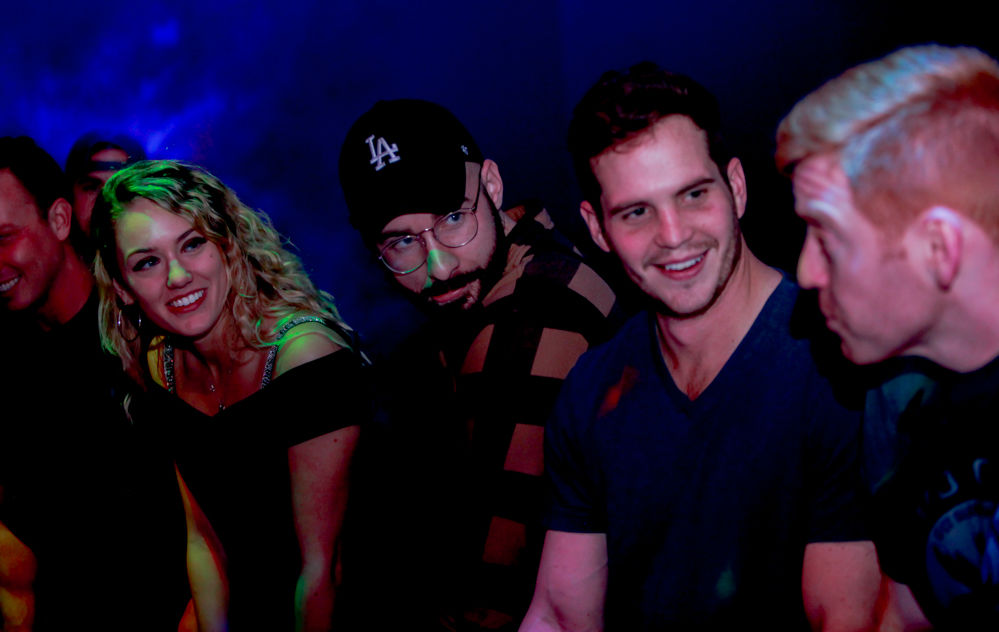 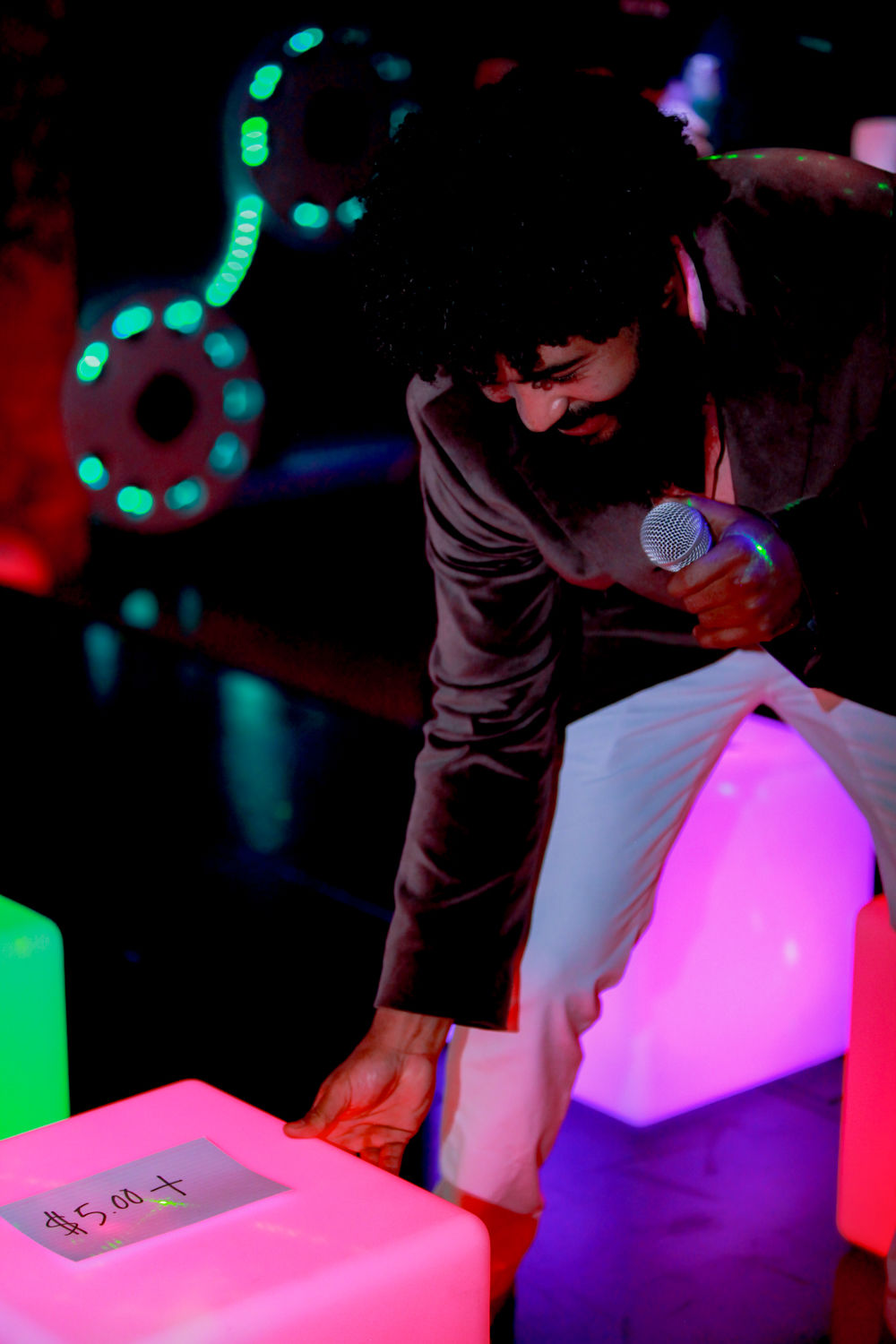 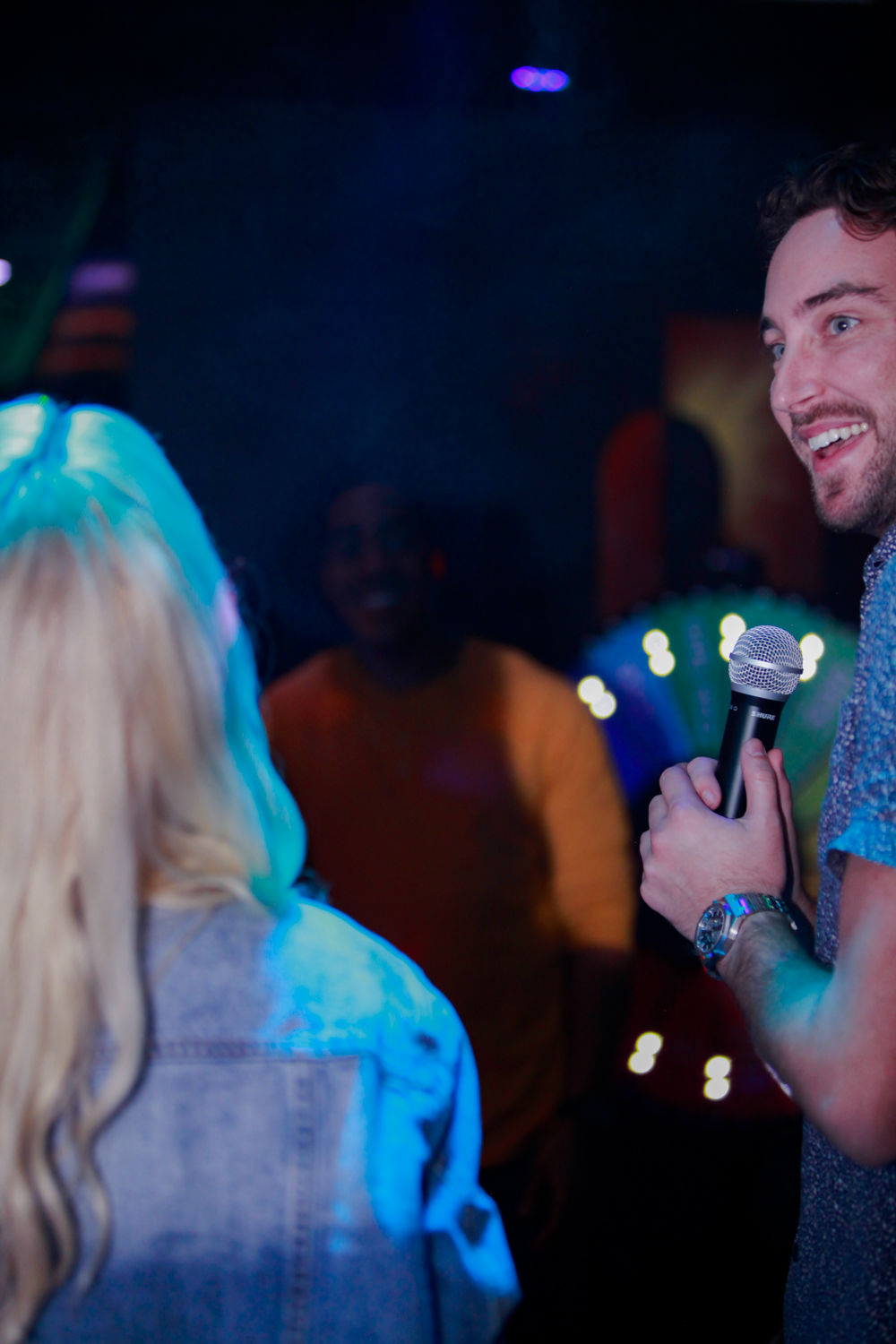 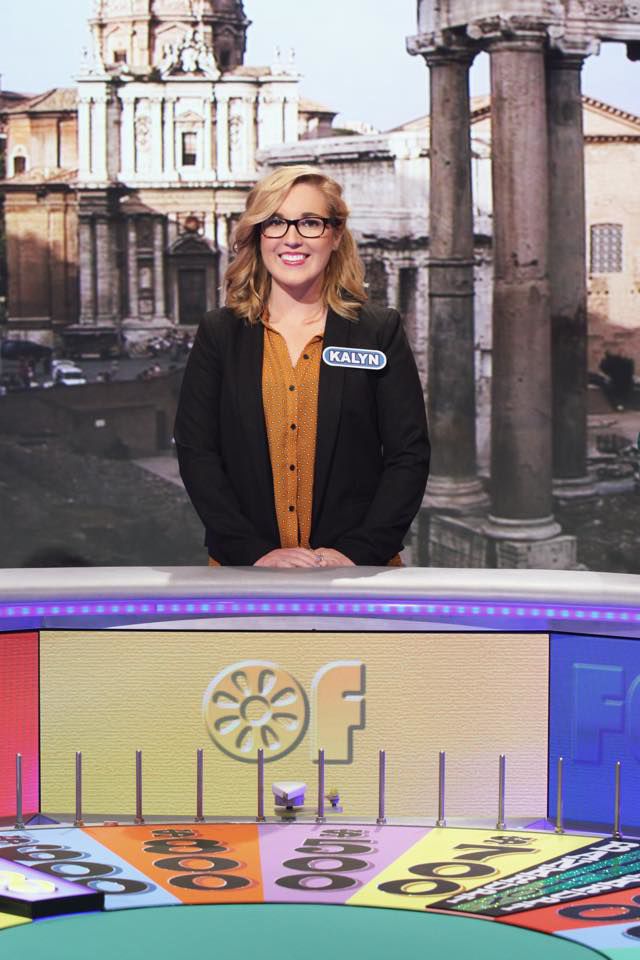 A new entertainment venue based on TV game shows is now open in Mount Pleasant. Provided

Come on down! The Epic Game Show Experience is now open in Mount Pleasant, and host Cameron Overstreet is ready. Nicholas Overstreet/Provided

Justin Brittingham is poised to answer a question. Nicholas Overstreet/Provided

Rhett Miller is challenged to transport cotton bolls via petroleum jelly on his nose from one bowl to another during a "Minute to Win It"-type game. Nicholas Overstreet/Provided

Hannah Leigh sticks cotton balls to her nose during a challenge. Nicholas Overstreet/Provided

Lowcountry contestants can come on down to a new entertainment venue in Mount Pleasant based on TV game shows.

The Epic Game Show Experience is Jason Pap's latest endeavor in the Charleston entertainment realm, joining his other ventures such as local escape rooms and ax-throwing locales.

I visited Chucktown Axe Throwing and The Break Room for Charleston Scene cover stories, so I thought why not try this one out?

I'm an avid TV game show viewer, tuning in to "Jeopardy!" often and binging classics like "Cash Cab," "Family Feud," "Press Your Luck" and "Let's Make a Deal." (Who remembers when the Game Show Network was part of the basic cable package? The good old days.)

While in college I was on "Wheel of Fortune." My name was drawn randomly from a rotating barrel of tickets and I advanced to the next round of auditions at a local hotel. There, I took a written test, a personality test and played a few fake rounds of the game show with about 100 other wannabe "Wheel"-ers.

A few months later, I got the phone call: an invitation to fly out to Los Angeles to be on the show. Unfortunately, I was paired against a fella who had watched "Wheel of Fortune" every day for 30 years. Despite the fact that I am a word nerd, I was no match for him, though I out-guessed my other opponent.

I solved two puzzles ("Red Hot Chili Peppers" and "Sports and Ceiling Fan"), walking away with some prize money and the experience of a lifetime.

So, as you can imagine, when I found out about The Epic Game Show Experience here in town, I got pretty excited. Luckily, I have a lot of friends who also love games. On a recent Monday night, we decided to test it out and press our luck.

Charleston's first ax-throwing venue is next to brewery: 'People want to throw weapons'

We enter a glass-walled space in an unassuming Mount Pleasant shopping center. Bright lights shimmer inside and flashy objects like a rainbow wheel, glowing cubes and a neon "Epic" sign beckon those making their way to Locals for sushi.

Now, in its early state, the venue's huge entry room mostly is empty space. The centerpiece is the "Epic" sign on the wall, a great backdrop for photo-ops.

Owner Pap says at some point he might have a car up front, the ultimate potential prize for those looking to play hard and win big. Currently, contestants win smaller prizes, such as free tickets to his other local ventures.

Pap, who's from Miami, says he wanted to bring some razzle-dazzle to Charleston and was inspired by the game show he's always wanted to be a part of, "Let's Make a Deal," where host Wayne Brady invites people dressed up as bananas and '80s hair metal guitarists to choose a door and hope they don't get "zonked," but instead end up with a new kitchen set or a flat-screen TV.

"I wanted to make it as tacky as possible," Pap jokes, showcasing a kitchy, old-school "Price is Right" wheel as a prop in the corner. The back room behind the curtains goes full-on game show party mode, with disco lights, James Brown tunes blasting and the "set": two rows with red and green buzzers, a light-up platform floor in the middle and a screen up front showing the current game in play.

Game show host Cameron Overstreet, funny and charming, has some funky button-ups and blazers he's ready to showcase. He is wearing a cool shirt with a colorful embroidered pattern.

Pap and Overstreet met at a "boisterous event" where Overstreet apparently popped out with no shirt on and hosted a party for hundreds of people. He claims he's an introvert.

"I apply my energy where it needs to be," he shrugs before making me dance for a chance at spinning the prize wheel.

My friends and I break up into gals vs. gents for an epic showdown. We start off with "Friendly Feud," a play on "Family Feud," where 100 people have been polled to answer ridiculous questions, like "What are common alien traits?" or "Who does your wife not want you to say is hot?" (Um, duh, everyone.)

It unfolds like the real game show — and it's fun.

Next is the "Minute to Win It" physical challenges. Let's just say one involves petroleum jelly and cotton balls.

Then, there is a "Price is Right"-type segment, where food items are piled into a bag and one member of each team has to place them within certain price ranges.

Finally, there is a classic trivia quiz, with chances to spin the prize wheel for a random number of points per question. Pap says there are more games, but not all can fit into the time allotted.

All in all, it's about an hour and a half of constant laughter, thanks to Overstreet's wit and the ridiculous antics that ensue. Playing board games may be home is a lot cheaper, but this is a good time for friends looking for an "epic" night out.

Tickets are $30 per player. I'd love for someone to throw me a birthday party there.

WHAT: The Epic Game Show Experience

WHEN: Book your game night online

Twenty minutes in and the only clue we had was a circular wooden puzzle piece with a silver moon on one side. We had 40 minutes left to figure…