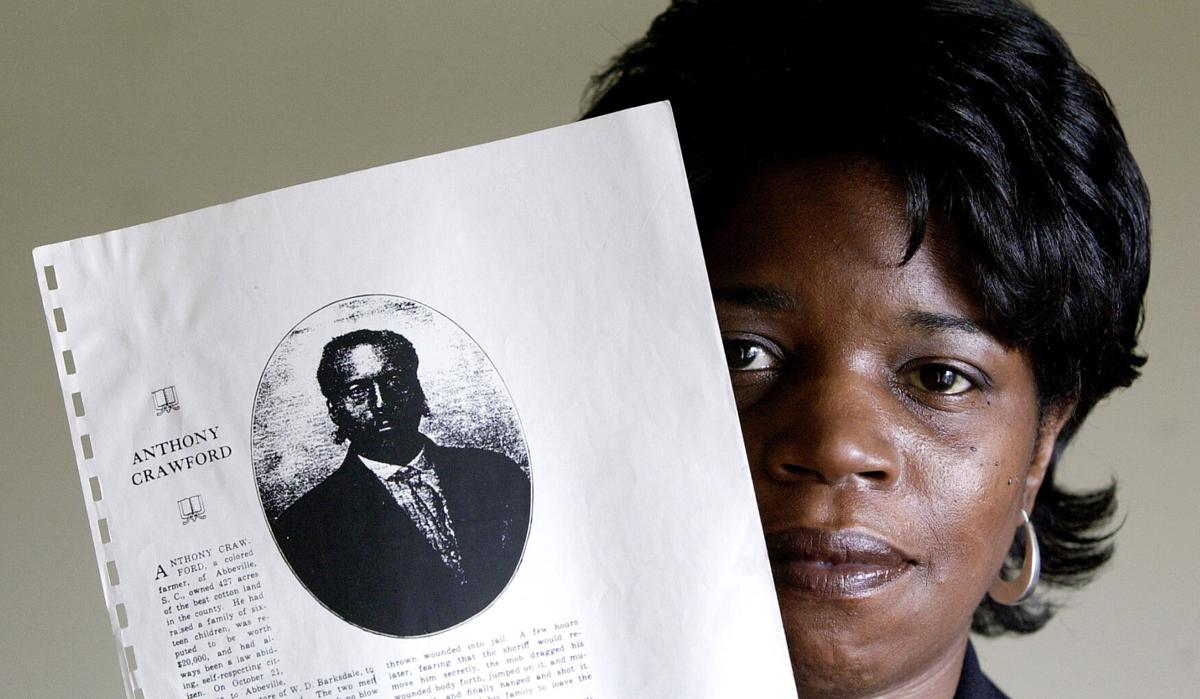 Doria Dee Johnson holds up a picture of her great-great-grandfather, Anthony Crawford, a wealthy Black farmer in Abbeville who was lynched by a white mob in 1916. His children inherited his 427-acre cotton farm but lost it when they couldn't pay off a small bank loan. AP/Photo Kenneth Lambert 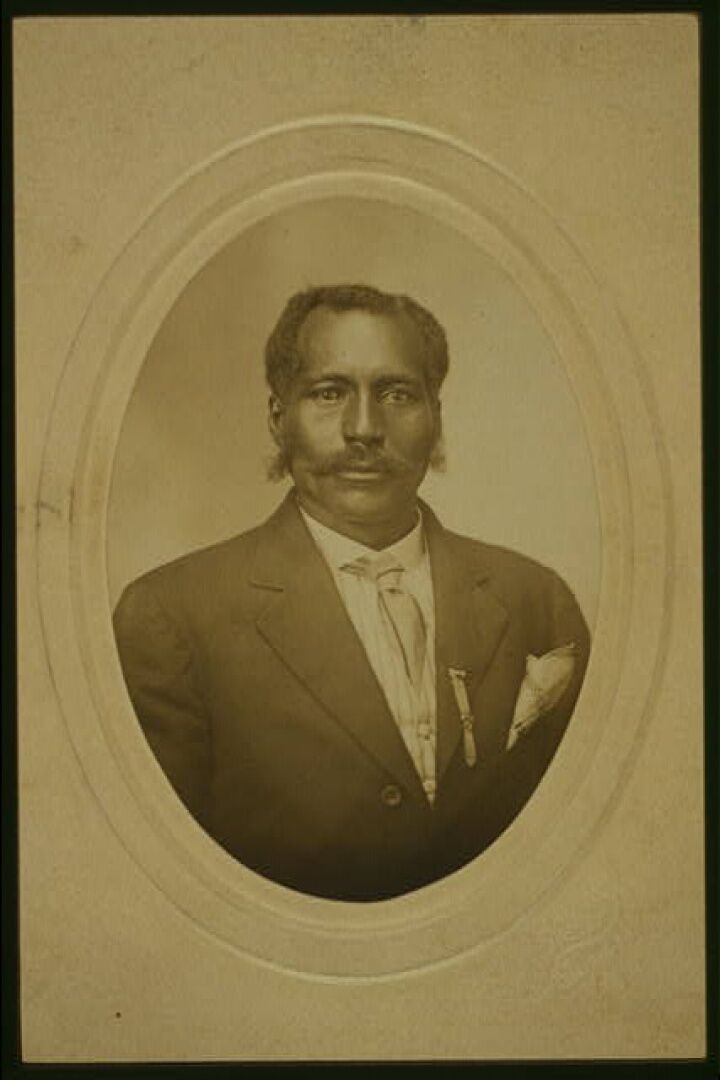 Anthony Crawford was a wealthy cotton farmer in Abbeville. Provided 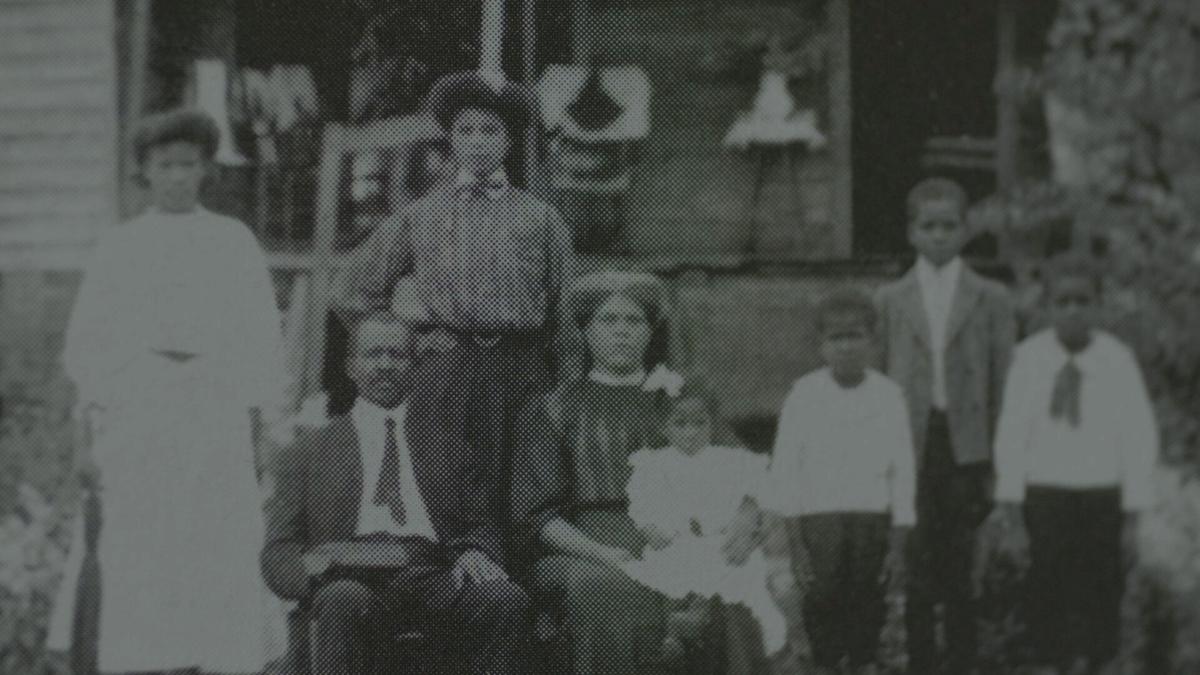 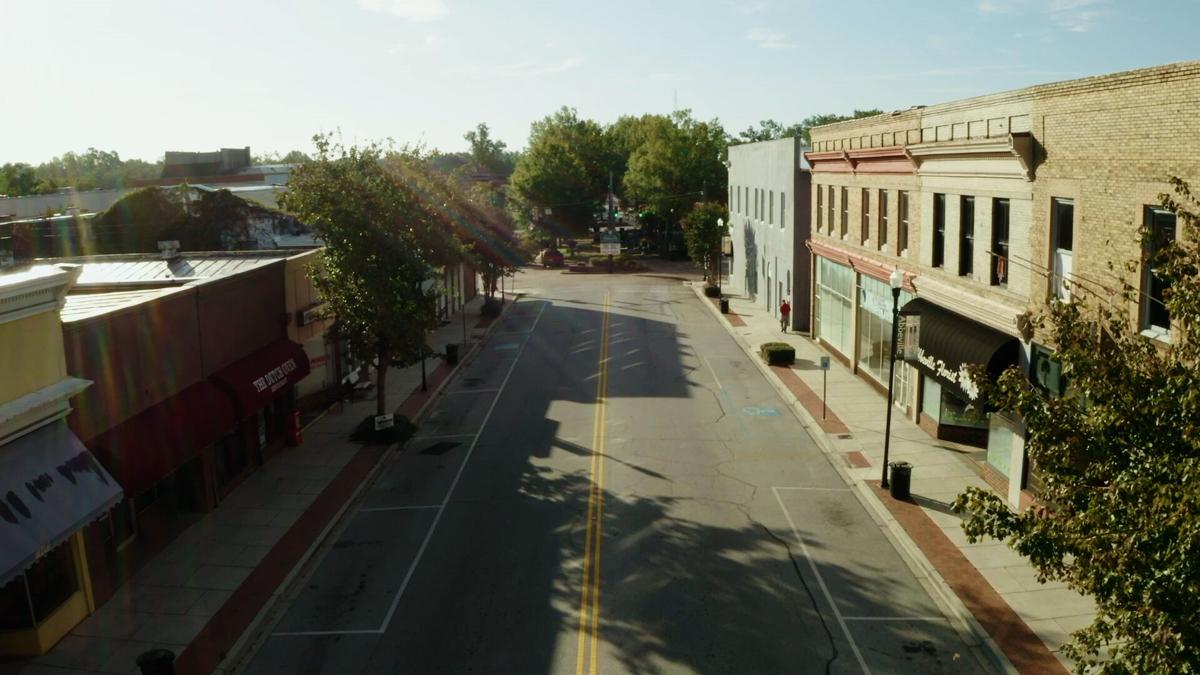 Doria Dee Johnson traveled from Illinois to Abbeville to find out more about the history and legacy of her great-great grandfather Anthony Crawford, the central historical figure in a new documentary by Hobo Films. Provided 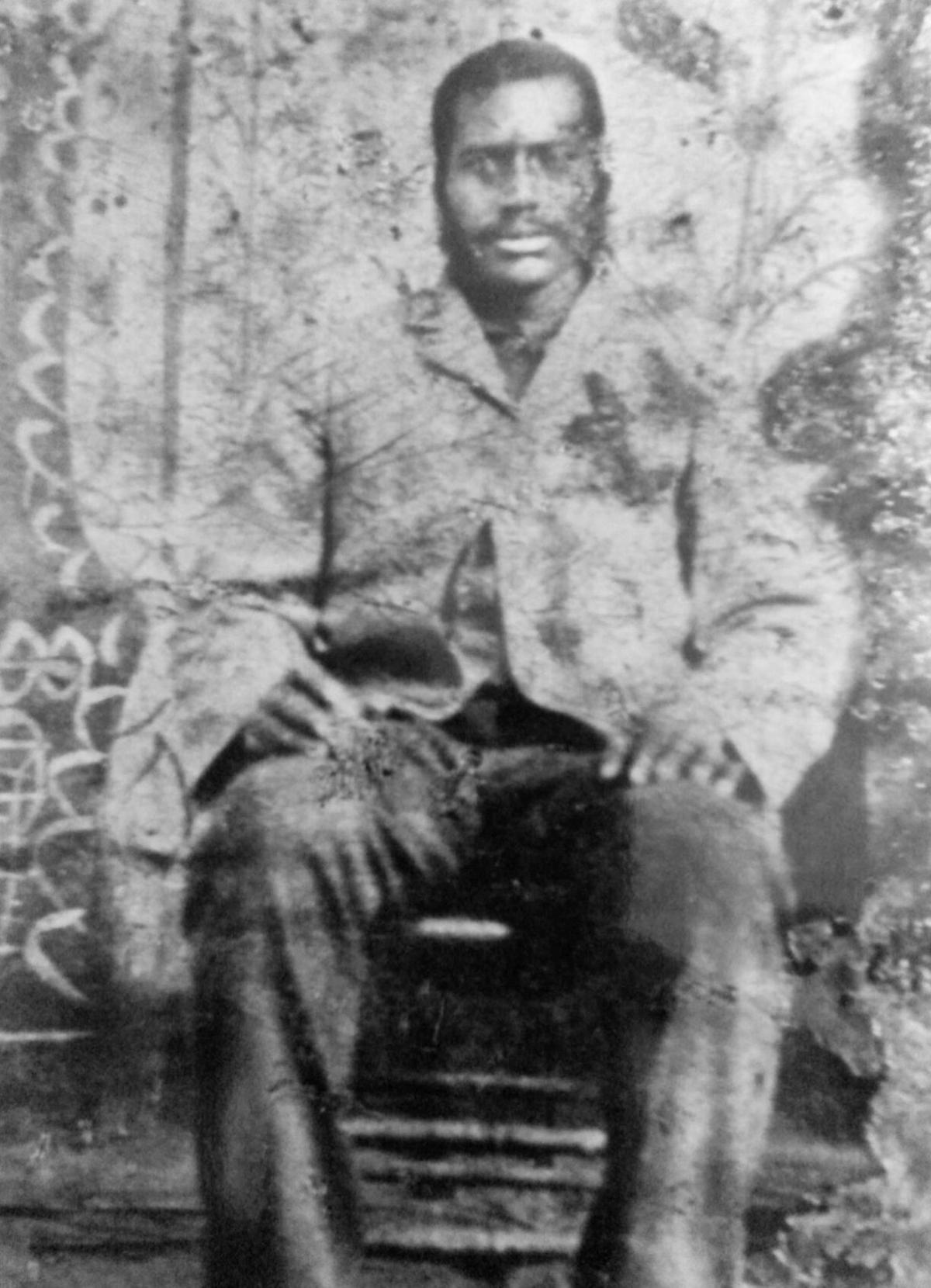 Anthony Crawford is seen in this undated photo provided by the Crawford Family. Crawford was lynched by a white mob in 1916. Jeffrey Collins/Provided 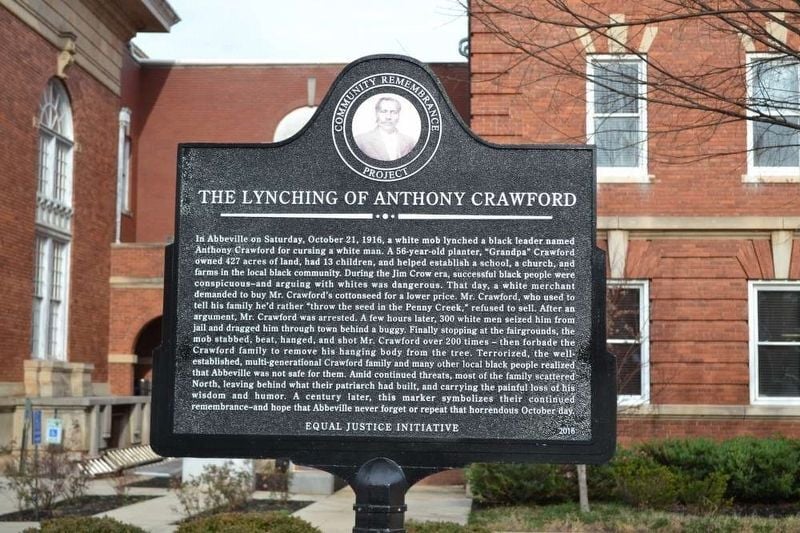 This historic marker detailing the lynching of Anthony Crawford was erected in Abbeville in 2016. Provided

Doria Dee Johnson holds up a picture of her great-great-grandfather, Anthony Crawford, a wealthy Black farmer in Abbeville who was lynched by a white mob in 1916. His children inherited his 427-acre cotton farm but lost it when they couldn't pay off a small bank loan. AP/Photo Kenneth Lambert

Anthony Crawford is seen in this undated photo provided by the Crawford Family. Crawford was lynched by a white mob in 1916. Jeffrey Collins/Provided

In 1916, just over half a century after slavery was abolished, a wealthy Black farmer who drew the ire of his jealous and bigoted White business peers in Abbeville was murdered by a lynch mob.

That man, Anthony Crawford, owned a 427-acre cotton farm in Abbeville. He was one of many successful Black farmers in the South at the time who had turned the trade their families were once forced to adopt at the benefit of White plantation owners into a viable business from which they could personally profit.

He also was one of 4,743 people lynched in the United States between 1882 and 1968 whose stories may not be widely known. That story is now being told in a new documentary that's available for streaming.

It's just one story brought to light amid a Southern reckoning that has finally begun to acknowledge its dark history of Black lynchings and murders. Confederate monuments were toppled in the latter half of the decade as citizens of all races sought reparative justice for a lopsided historical representation.

And when the National Memorial for Peace and Justice opened in Montgomery, Ala., in 2018, it was the first memorial dedicated to the legacy of enslaved Black people with a focus on contemporary presumptions of guilt and police violence as repercussions of slavery, lynchings and Jim Crow segregation.

"Crawford: The Man the South Forgot" is the latest in a series of related cross-platform content produced by Hobo Films that fits into an ongoing narrative of this Southern reckoning.

This documentary follows one of Anthony Crawford's descendants, Doria Dee Johnson, in her quest to unearth and disseminate the real history and legacy of her great-great-grandfather. Johnson, who passed away in 2018, is the lead figure in the documentary's footage that dates back to the early 2000s, when the Illinois resident's journey took her to Abbeville.

There, she searched the historic archives, met family members she never knew she had and discovered a history that both incited a deep sense of pride for what her ancestor accomplished and anger for what he and his descendants lost. Not only was it his life, but what should have been his family's inheritance for generations to come.

"Crawford: The Man The South Forgot" is available to stream at kweli.tv/programs/crawford-the-man-the-south-forgot. The network showcases global Black stories through curated documentaries, indie films and web series.

"Racial violence in America is pervasive and well-documented," said Hobo founder Howard Bowler. "Yet the importance of land as a motive has not been fully examined or exposed. If you want to understand the history of land stolen from Black Americans, follow the lynching trail. They are inexorably, and tragically, linked.”

In Crawford's case, his family was ordered to vacate the 427-acre cotton farm they owned, cease their profitable business and flee town following his murder by a mob of blood-thirsty White people who were jealous of his success as a competing Black business owner.

His "crime," for which he was dragged through the streets, lynched and then shot as he hung already dead from a tree, was cursing a White man for offering him a low price for the cotton seed he was trying to sell.

Though Crawford's children legally inherited the land, they feared living on the property and later lost it when they couldn't pay off a small bank loan.

A lot of current economic disparities between the wealthy and people of color in America tie back to what happened in the early 1900s, the documentary's editor, Tiffany Jackman, suggested.

"It's about wealth being stolen from people and that wealth not being able to trickle down through the generations," Jackman said. "And that ties into a lot that’s going on today. You can still see the difference between predominantly White neighborhoods and Black neighborhoods, as far as education and resources."

Caroline DeVoe, director of the film, along with Jackman, worked hand in hand on telling not only the overarching story of land loss and detailed account of Anthony Crawford's life but also Johnson's quest to make her ancestor's history known in the town of Abbeville and beyond.

Jackman came onboard later, tasked with piecing together years of footage into a comprehensive but concise film. She could have gone many different directions for the documentary but settled on a story with a Black woman at the center, a story of tragic loss but also determination to have wrongs righted and history told from all sides.

"I felt like it needed to shine a light on this injustice that happened, but also create a sense of pride for Black people as well that not everything is awful about that time period," said Jackman. "There were Black people who were successful, there were wealthy Black people in the time period."

DeVoe worked with Johnson for more than a decade combing the archives of the NAACP and the South Carolina Historical Society and recording the footsteps and memories of descendants of eye-witnesses and others connected to the story.

Among them is Phillip Crawford, the great-grandson of Anthony Crawford. He's lived in Abbeville his whole life, since 1968, and has personally witnessed racial discord and riots. He thinks that Johnson's quest and this documentary have already helped bond the community.

In addition to getting the town to erect a historic landmark in Crawford's honor, Johnson in 2005 got the S.C. Senate to formally apologize for all of the lynchings, including her great-great-grandfather's, that occurred on U.S. soil. The documentary details those historic moments and those in Abbeville who helped make them possible.

"It might be a small story, but you never know what a small story can be turned into, what can come of it," said Crawford.

Nevertheless, a Confederate monument still sits in the center of Abbeville, a much bigger statue than the plaque given to Anthony Crawford.

"As nice as everybody in Abbeville is, it’s still, as a person of color, a little off-putting to have a big Confederate monument in the center of town," said Jackman.

Phillip Crawford offered, "If it was my choice, it wouldn't be there. Ultimately, it still reflects the views of this town."