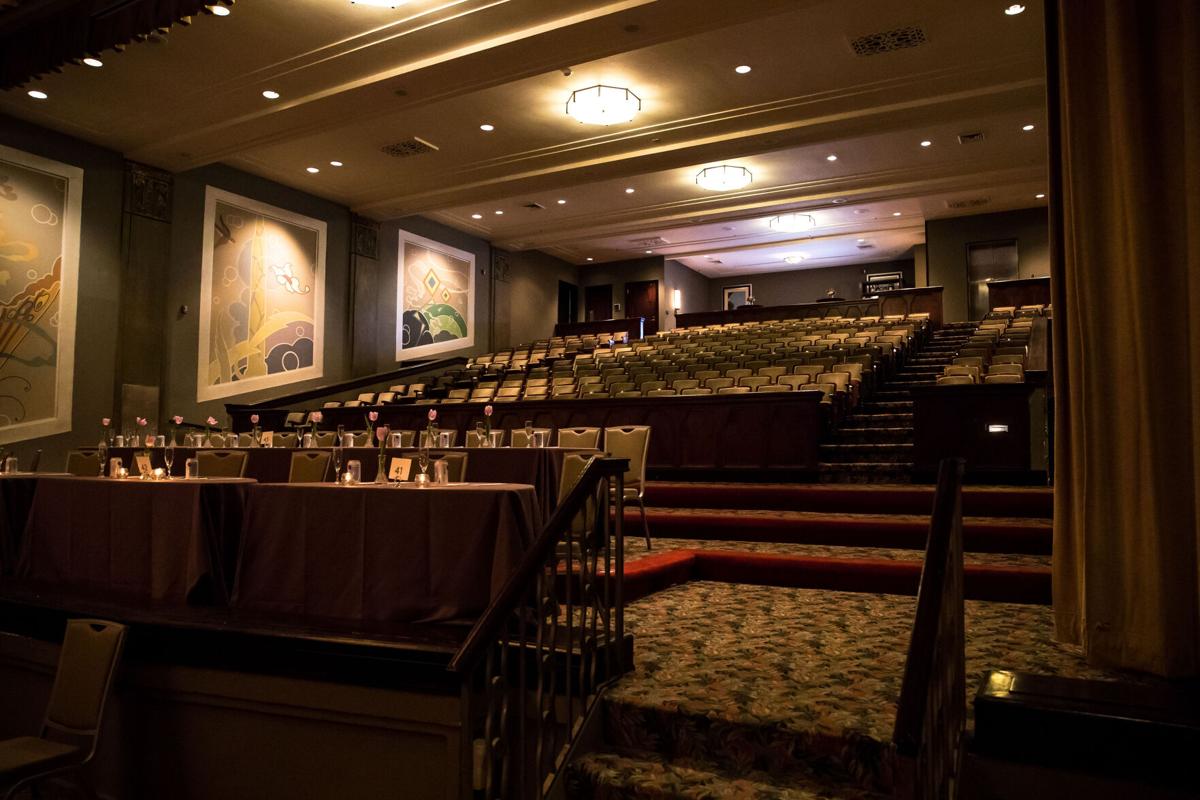 The Riviera Theater is now opening its doors to the general public for concerts, comedy acts and other shows that will be announced as they are scheduled. Provided 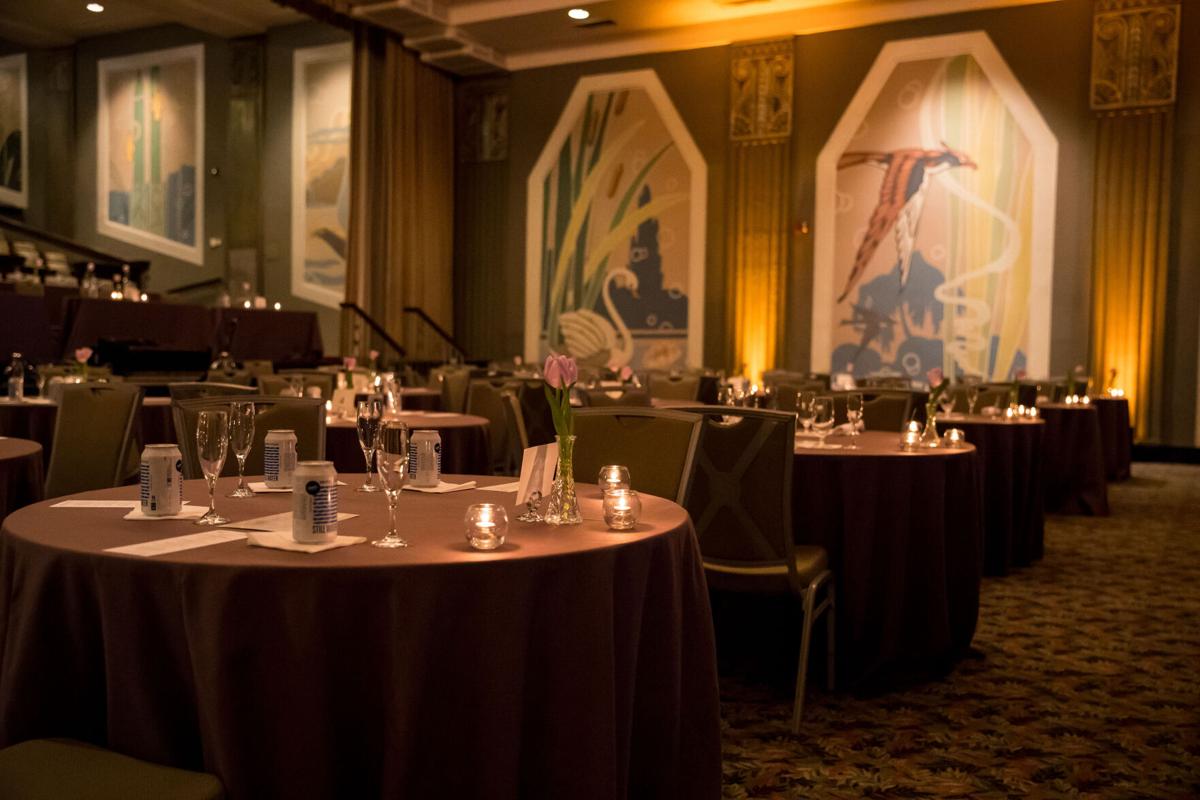 The theater's art deco style, from its exterior to interior, is on display. Provided 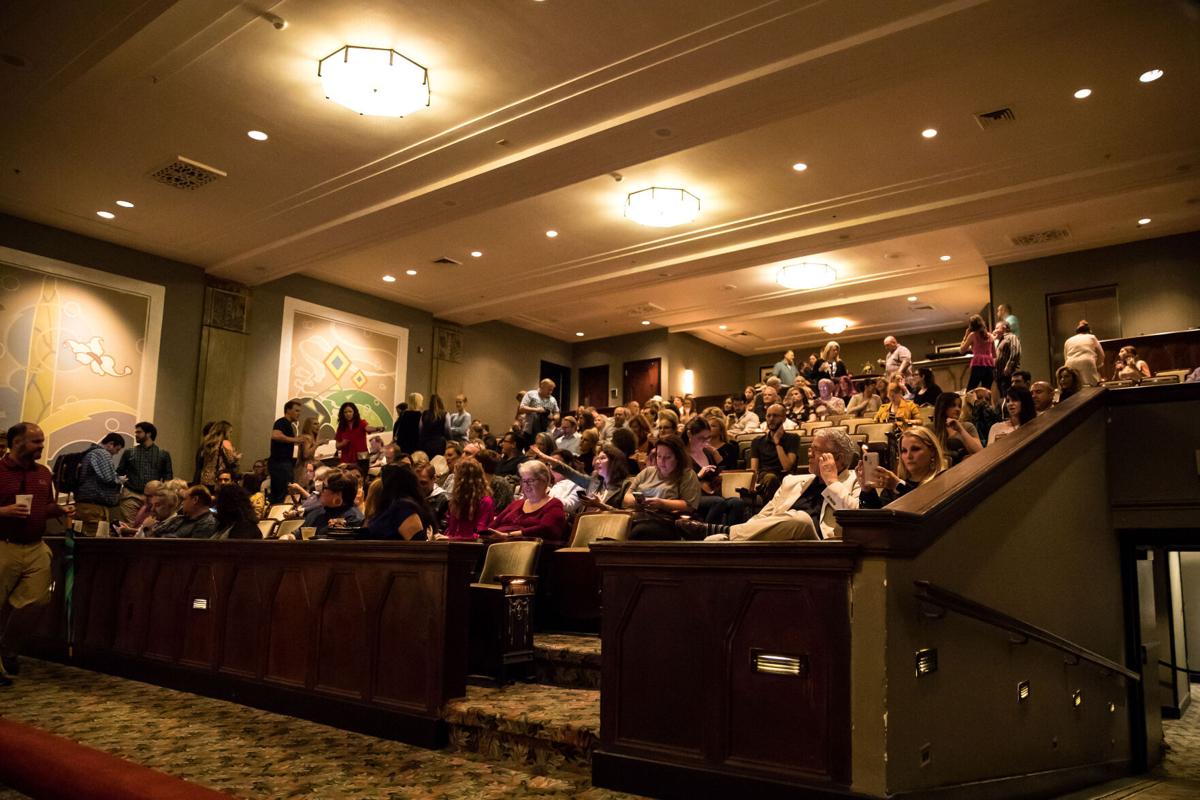 The Riviera Theater balcony fills up for the sold-out Jewel concert on March 18, the first event open to the public in the historic space in quite some time. File/Provided 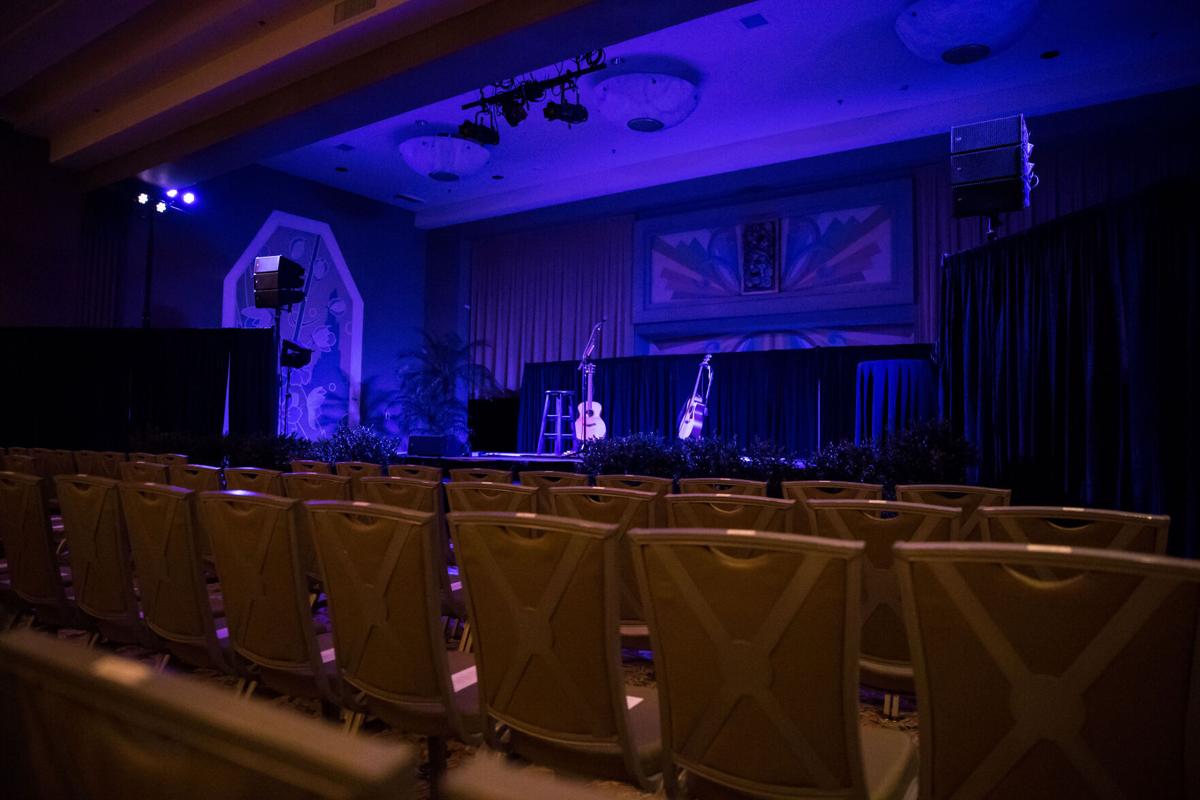 The setup for Jewel for a concert at the Riviera Theater on March 18, 2022. Provided 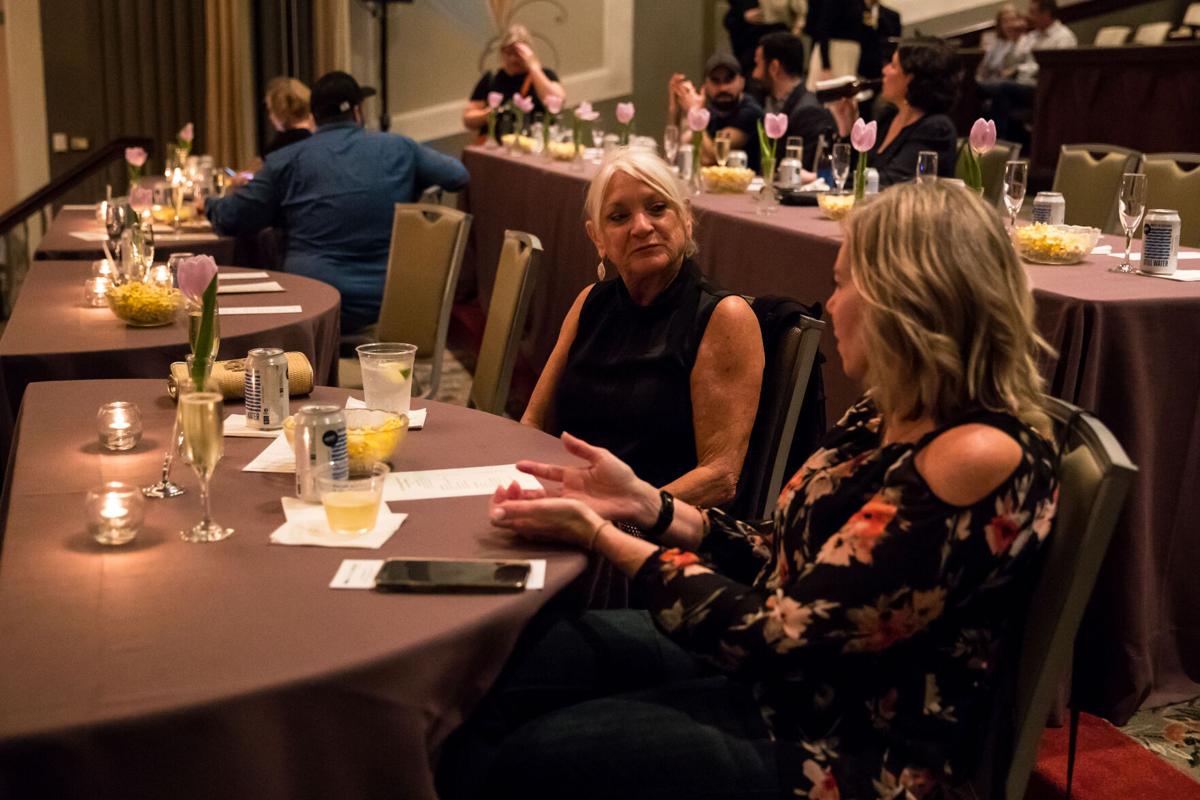 Between balcony and floor seats will be tables for shows, where guests can receive table service, like wine and bites to eat. Provided 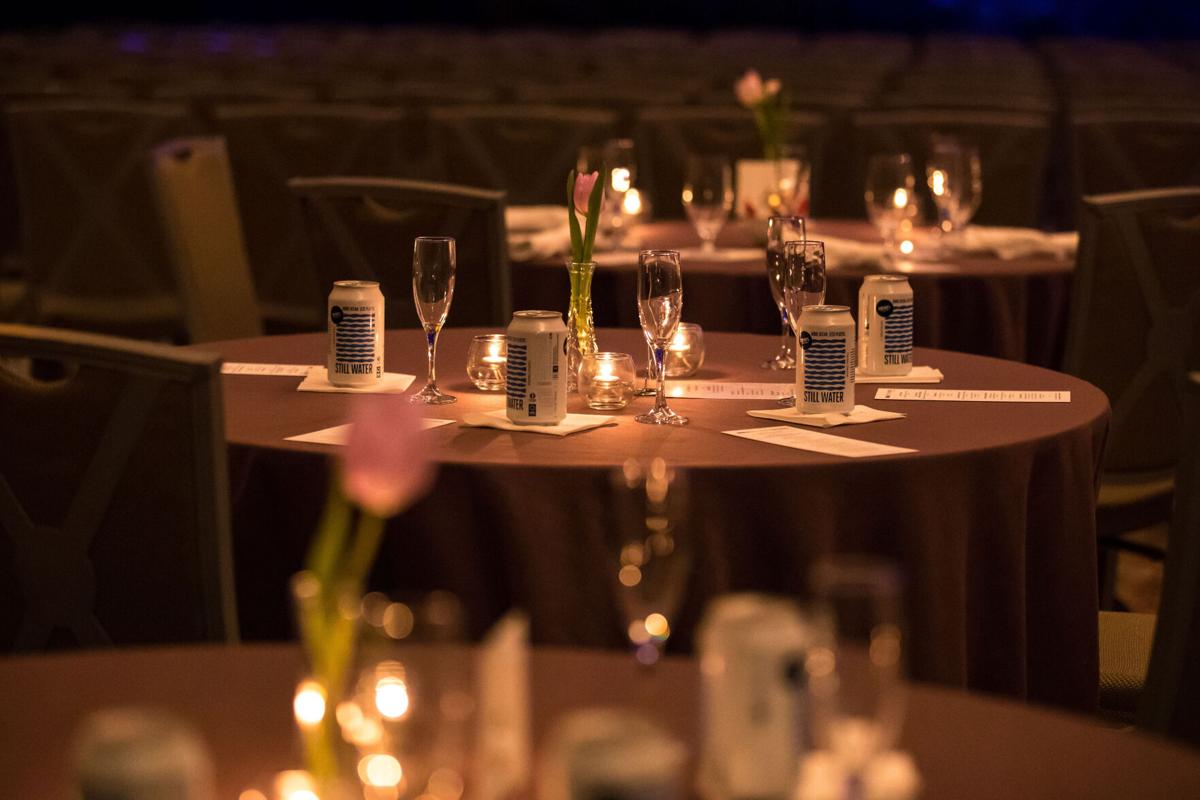 Tables are decorated for the Jewel concert on March 18, 2022, at the Riviera Theater on King Street. Provided

The Riviera Theater is now opening its doors to the general public for concerts, comedy acts and other shows that will be announced as they are scheduled. Provided

Tables are decorated for the Jewel concert on March 18, 2022, at the Riviera Theater on King Street. Provided

When you walk beneath the flashing marquee and across the gold, green and maroon marble tiles of the Riviera Theater at 225 King St., you're stepping past a forgotten entertainment landmark.

The art deco theater, built by Albert Sottile with the help of renowned regional architect Charles C. Benton in 1939, once charged 25 cents a movie and seated upward of 780 people on the main floor and 125 in the balcony for the latest feature flicks projected onto a 50-foot screen.

Now, it is reopening, but for a different purpose.

Stepping back in time

The day the Riviera originally opened, the Charleston Evening Post (now The Post and Courier) printed, "It is modern in style with classic proportions and Greek motif. The facade is of light stone trimmed with black. The building is of steel frame construction, fireproof. The vestibule and foyer are finished in black formica and chromium with background of flex wood. There is a mezzanine with grill, and opposite it a long mural depicting a scene of Lake Como. This was painted over a previous mural which was marred by the original artist in a fit of pique."

The Lake Como mural still covers an interior wall of the theater, while the original balcony seats, built to last, peer below into a retro-carpeted ballroom that hasn't been majorly updated since the 1970s.

During that decade, in 1977 to be exact, the movie theater closed its doors, leaving no motion picture house in operation on the peninsula for the first time since the Theatorium opened in 1907.

That same decade, the building's demolition was pursued but met with an uproar from preservation-minded citizens who ultimately flatlined those plans.

In the '80s, the Charleston Board of Architectural Review denied developers' plans to turn the building into a restaurant and retail space, and a group of local citizens formed an interest group that gathered more than 5,000 signatures to preserve the building as a theater.

Raymond Knight, Jr., bought the place in 1988 with hopes to renovate the space with preservation in mind, ultimately updating the marquee and Carrara glass on the King Street exterior before putting it on the market.

In the early '90s, then-Mayor Joseph P. Riley expressed his interest in the space's conservation. "But, by all means, the city is not interested in a demolished theater," he said at the time.

In 1993, City Council approved the purchase of the theater, which the city leased to Charleston Place Associates.

And that leads us to the present.

The Charleston Place and The Riviera

The once-abandoned and derelict space, which is now listed on the National Register of Historic Places, is finally opening its doors to the general public once more.

The plan is to continue to do so around once a week, once scheduling picks up, for the rest of the calendar year, according to Beemok Hospitality President Casey Lavin.

The hospitality group is owned by Charleston billionaire and benefactor Ben Navarro, who purchased the Riviera as part of a deal acquiring The Charleston Place last year for $350 million.

The hotel and shopping hub directly across the street has used the Riviera as a conference and ballroom space for large groups since 1993. But with Navarro's takeover comes somewhat of a philanthropic opportunity to allow Charleston locals back into the venue for a purpose similar to its original intent.

"Part of what our goal was was to animate those crossroads in Charleston, bring life to that area that attracts locals in particular and bring them back to the center of town," said Lavin.

Concerts, comedy shows, off-Broadway productions and podcast tapings are all on the books, according to Lavin. More will be announced in tandem with an upcoming rebrand that will include a new website and social media pages with easy access to purchasing tickets.

The goal isn't to make money, Lavin added, but to hopefully break even and reanimate the space, giving access along with an entertainment experience to the Charlestonians who have never been inside.

"What we want to explore is the celebration of live performing arts," he said. "It's definitely not a revenue thing. Candidly, it's not something we’re doing because it’s a brilliant business model."

The first public event at the Riviera was a sold-out performance by Jewel on March 18.

The second will be a concert featuring The Wallflowers (starring Bob Dylan's son Jakob) on April 15, followed by The Wailers on May 26, Ann Wilson on June 10, Colbie Caillat on June 17, Collective Soul and Switchfoot on Sept. 9, and Father John Misty on Sept. 19.

Lavin describes the atmosphere and ambiance of these ticketed events as "a little more clubby, like a speakeasy that you'd go down to the in '20s and '30s."

The balcony seats will remain in the back, while chairs will fill in the first floor. In between, there will be a limited number of VIP tables for rent, where guests can receive table service, like bottles of wine and charcuterie. Lavin said the Riviera will be utilizing the culinary team at The Charleston Place, but there are also hopes for local restaurant and chef collaborations.

The experience will be personalized based on each artist performing.

"It feels more intimate," said Lavin. "Not like you’re going to a grand hall, but a cozy space where you can get a real sense of artists and what they sound like."

It's a far different space than the Credit One Stadium on Daniel Island, also owned by Beemok Hospitality, but the goal is the same.

"Part of our mission is to be a mechanism and vehicle to allow people to connect and bring joy into the lives of others," said Lavin. "It's another opportunity to do something that quite frankly needs to be done, allowing locals to get out for a night."

Lavin asserted the ticket prices will remain "reasonable," though so far they're skewing higher than the Charleston Music Hall, for example. A seat for The Wallflowers, which can be purchased at ticketmaster.com, will cost between $47 and $63.

Lavin said that most of the 75 or so private events that happen at the Riviera annually will still remain. These shows will be held in addition.

Parking will be available at The Charleston Place garage along with other nearby garages, and of course the talent gets to stay at the hotel right across the street.

Lavin added that the theater will continue to be preserved, from the outside marquee and terrazzo to most aspects of the vintage interior, with no plans for any major renovations.

Just touchups and technology upgrades have been made thus far. A historic building in the historic district, the space also must go through the Board of Architectural Review to approve any exterior changes.

The Preservation Society of Charleston's 101st annual meeting took place at the Riviera in October, along with the annual Carolopolis Awards ceremony that recognizes excellence in historic preservation.

The theater remains under the organization's watchful eye, and Manager of Preservation Initiatives Anna-Catherine Carroll said the society wouldn't want the iconic art deco facade and character-defining elements of the building to change, including any original features.

This new use of the building is welcomed. It feels like a return to active use, offered Carroll, who said the Preservation Society has been a proponent of the theater's on-and-off operation since the 1990s as a private event space.

"I think in Charleston, we’re very fortunate that so many of our historic buildings are in active use, and at the Preservation Society, we are supportive of creative and adaptive use of historic spaces, because it fosters long-term preservation," said Carroll. "In order for a space to be preserved, it needs to be functional."

The Beemok Hospitality Group seems to be on the same page, with no plans to overhaul the design.

"It's one of the crown jewels of the city," said Lavin. "... The persona of the building, we would never want to change."

He also gave a nod to citizen groups, like the Friends of the Riviera, who years ago petitioned to keep the space intact and out of the hands of developers.

"If it were not for a few active community members who were really passionate about protecting the story of the Riviera, I don’t know if it would be what it is today," said Lavin.

In a way, it's nice to think that the theater is reverting to something close to its original intention, though the 50-foot screen is no longer the source of laughter and tears among the crowd. Instead, it will this time around be guitar strings and lyrics.