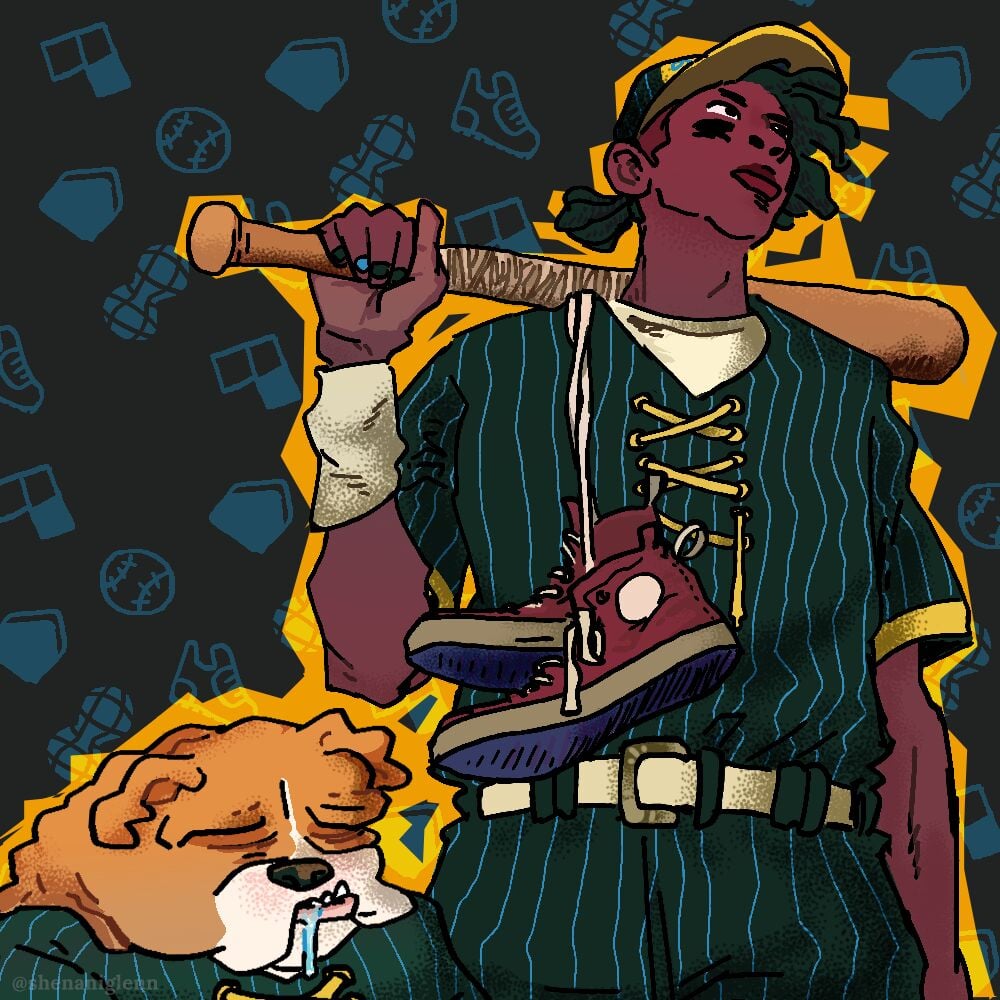 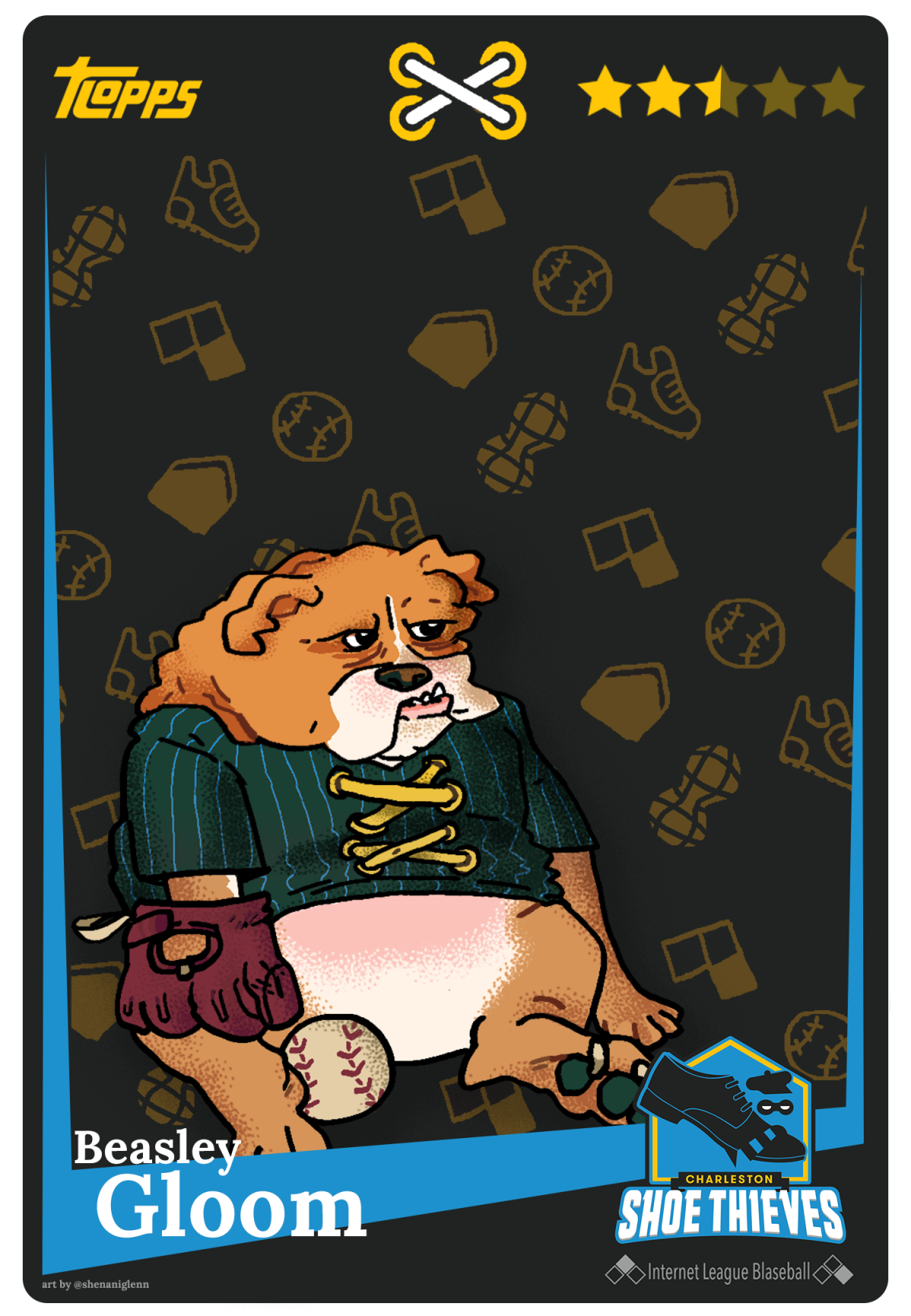 Beasley Gloom pitched for the Charleston Shoe Thieves for eight and a half seasons before being swapped to the Canada Moist Talkers on Season 9, Day 64. Jonathan Glenn/Provided 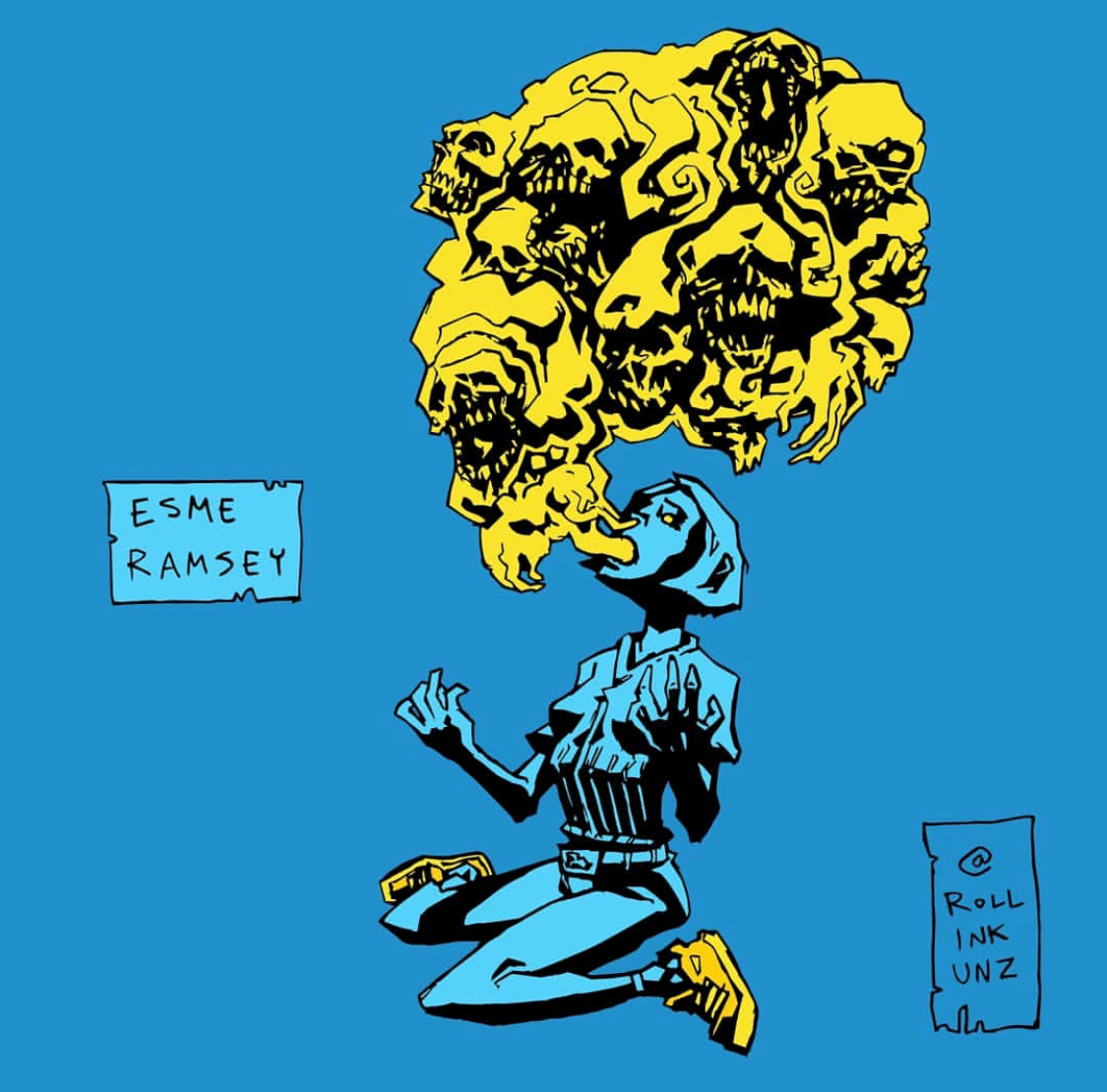 Esme Ramsey, a player for the Charleston Shoe Thieves, had the misfortune of becoming a spirit medium, leading to a succession of previously-incinerated baseball players manifesting her body. RollinKunz!/Provided 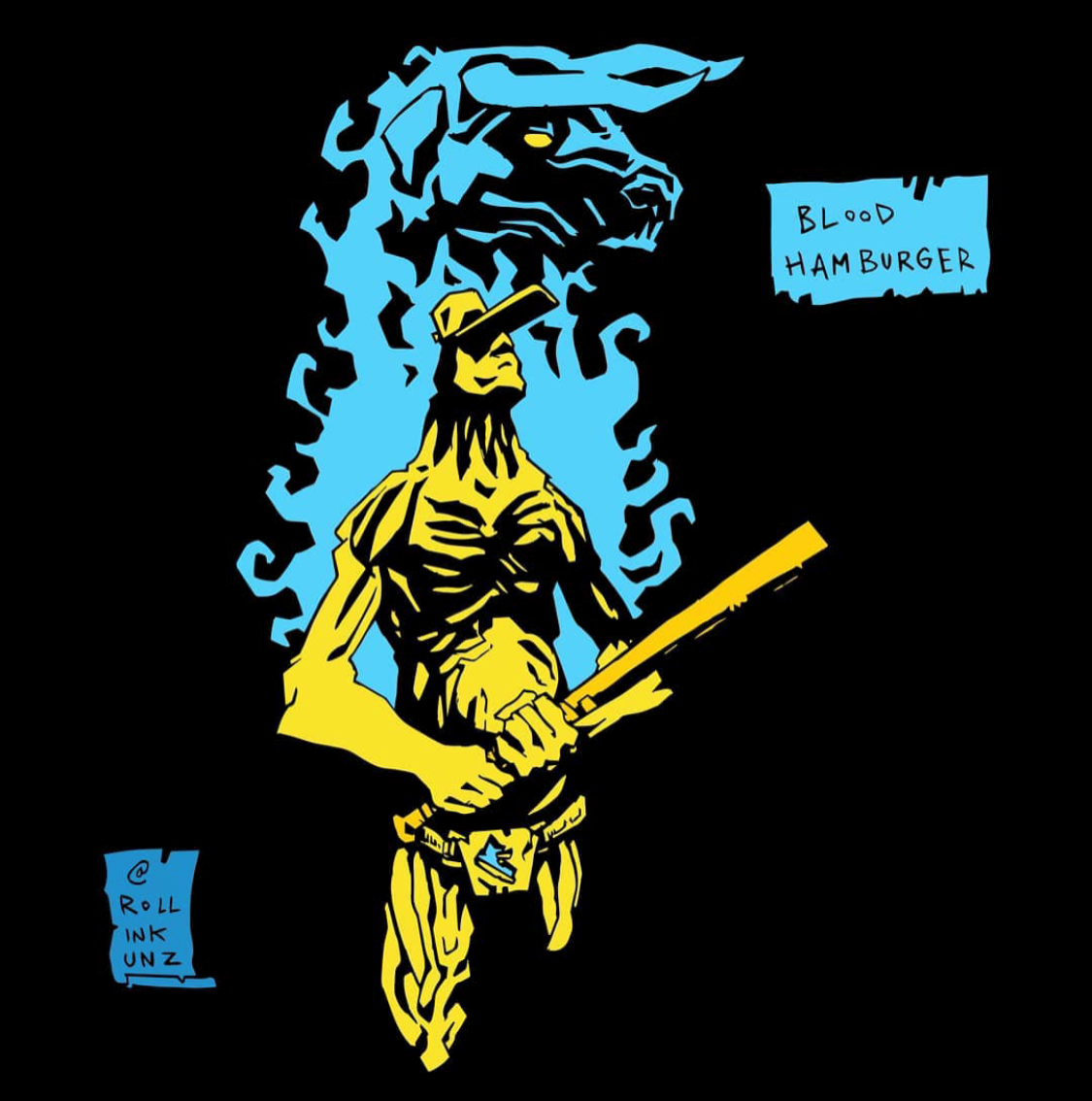 This hard-hitting hamburger homonculus, Blood Hamburger, is possessed by the spirit of a cow-demon. RollinKunz!/Provided 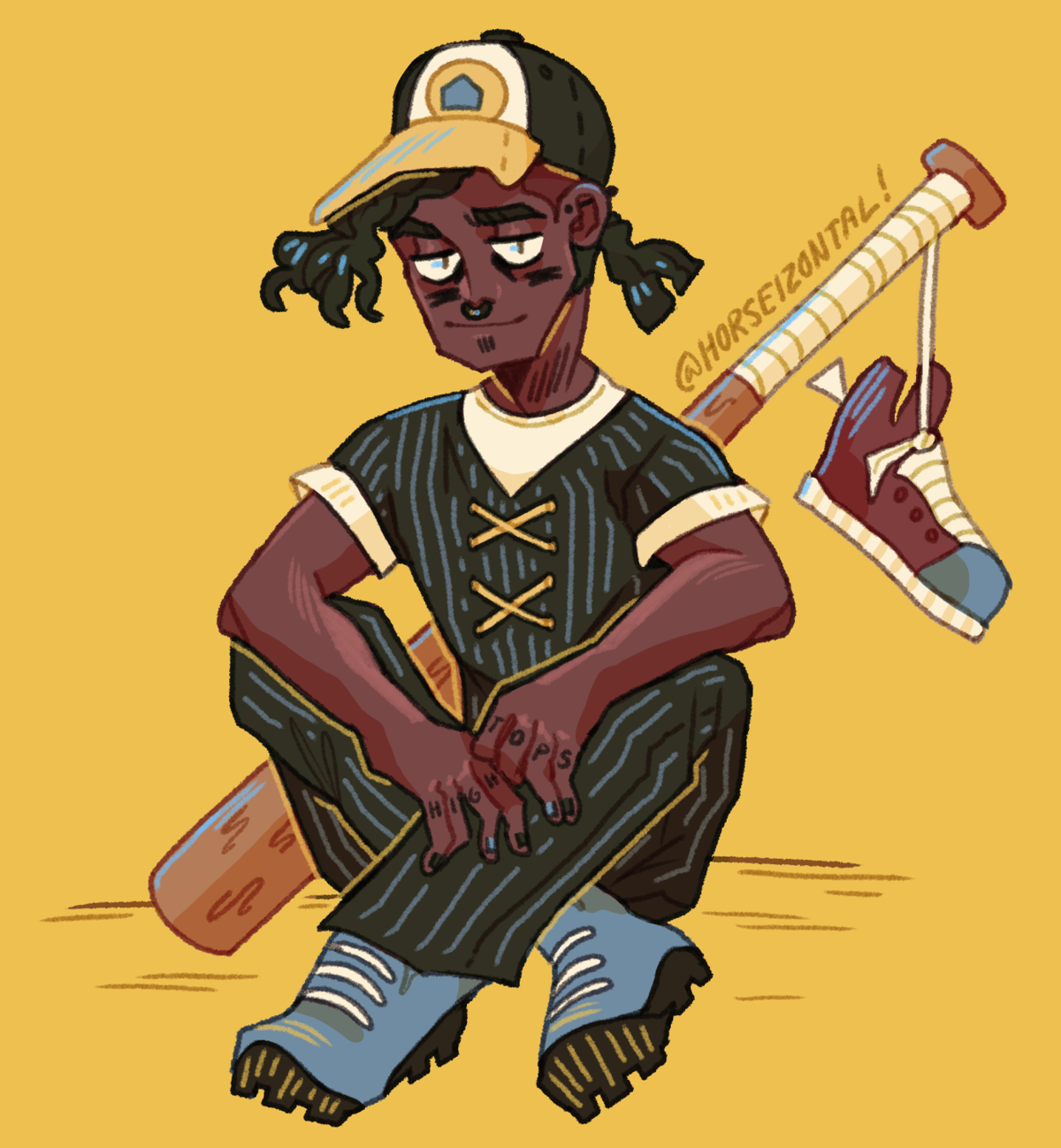 A college student studying neuroscience and film production is also a fan of blaseball. Here is her first art depiction of a Shoe Thieves player, Workman Gloom. Horse Hoffman/Provided 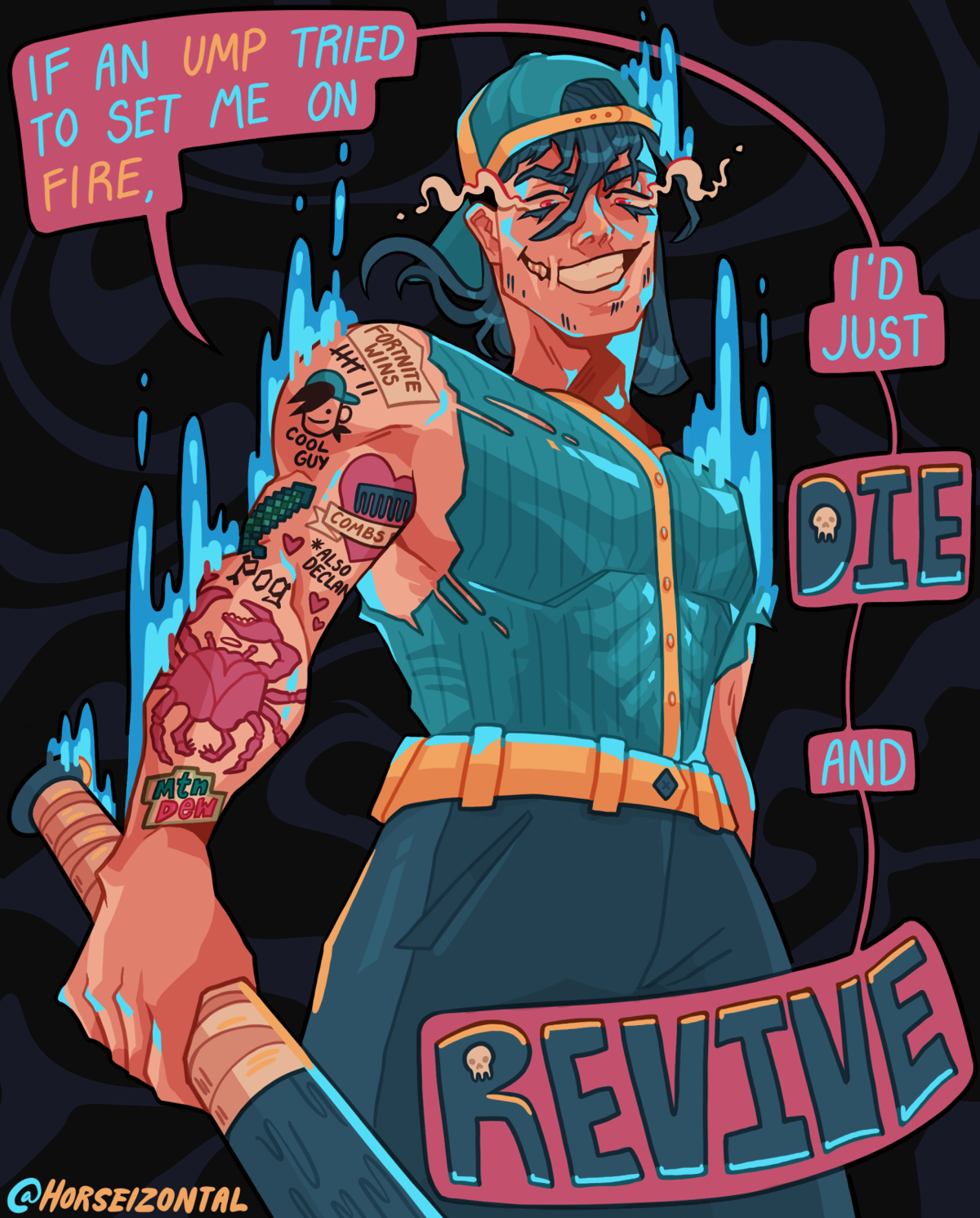 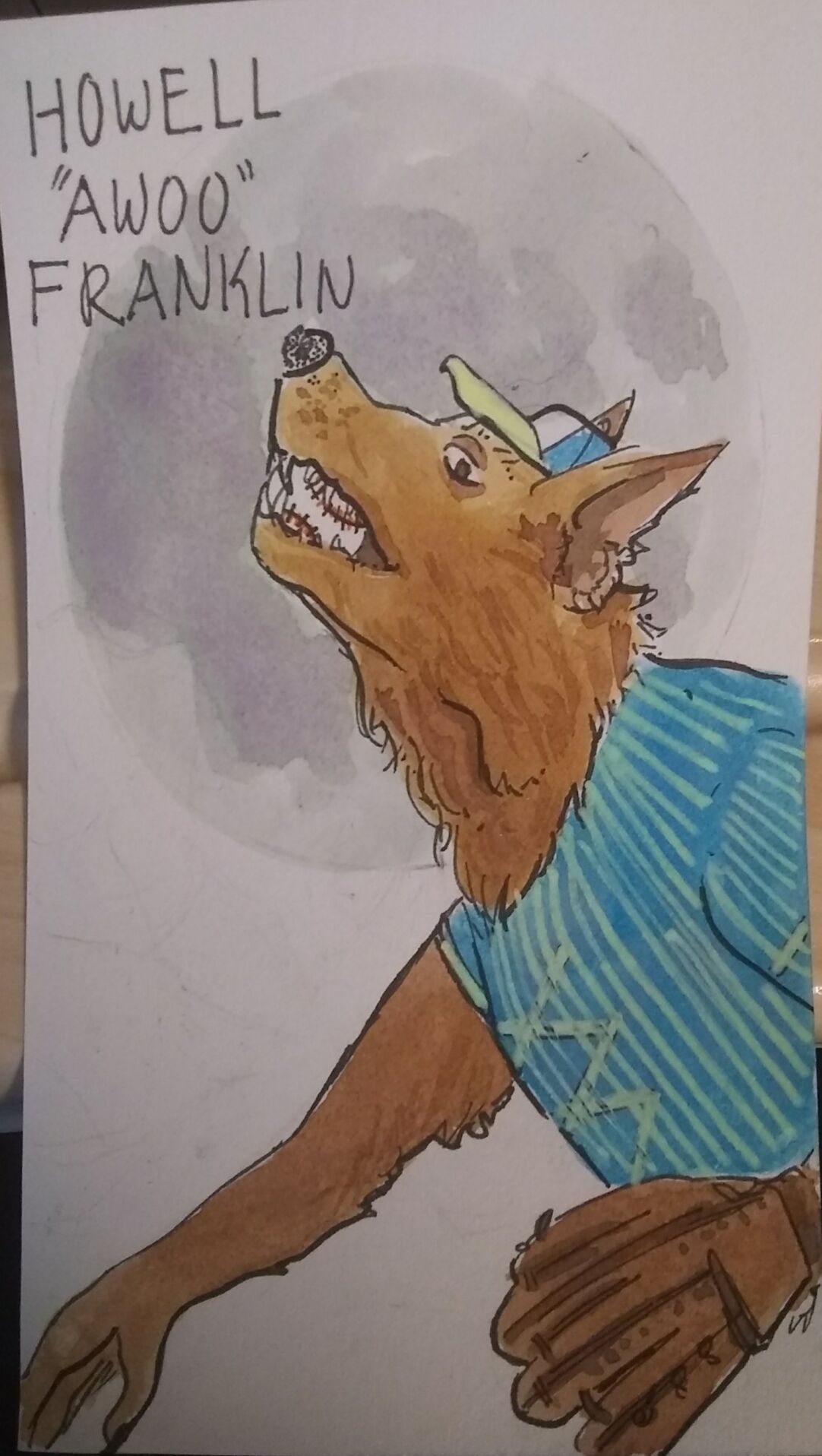 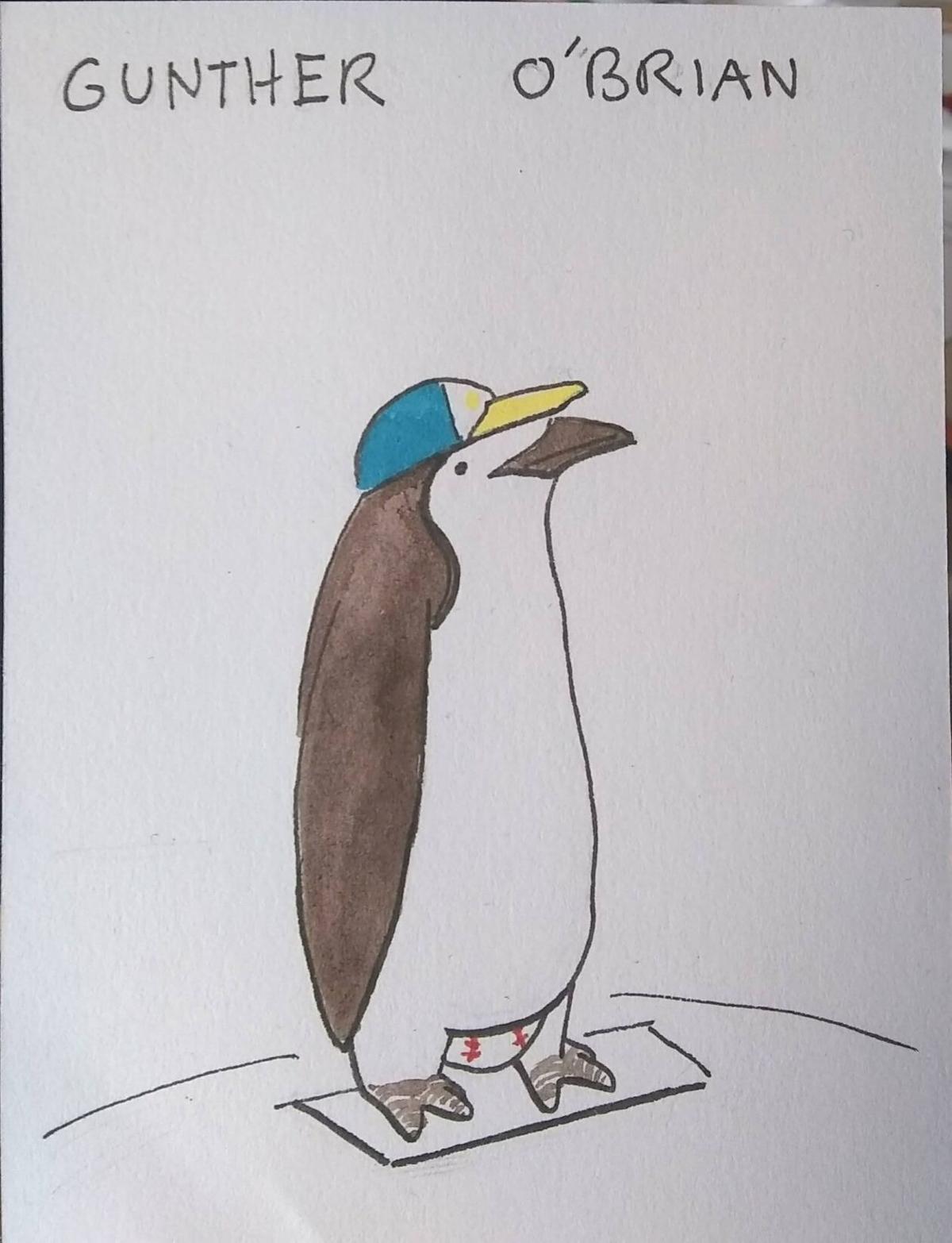 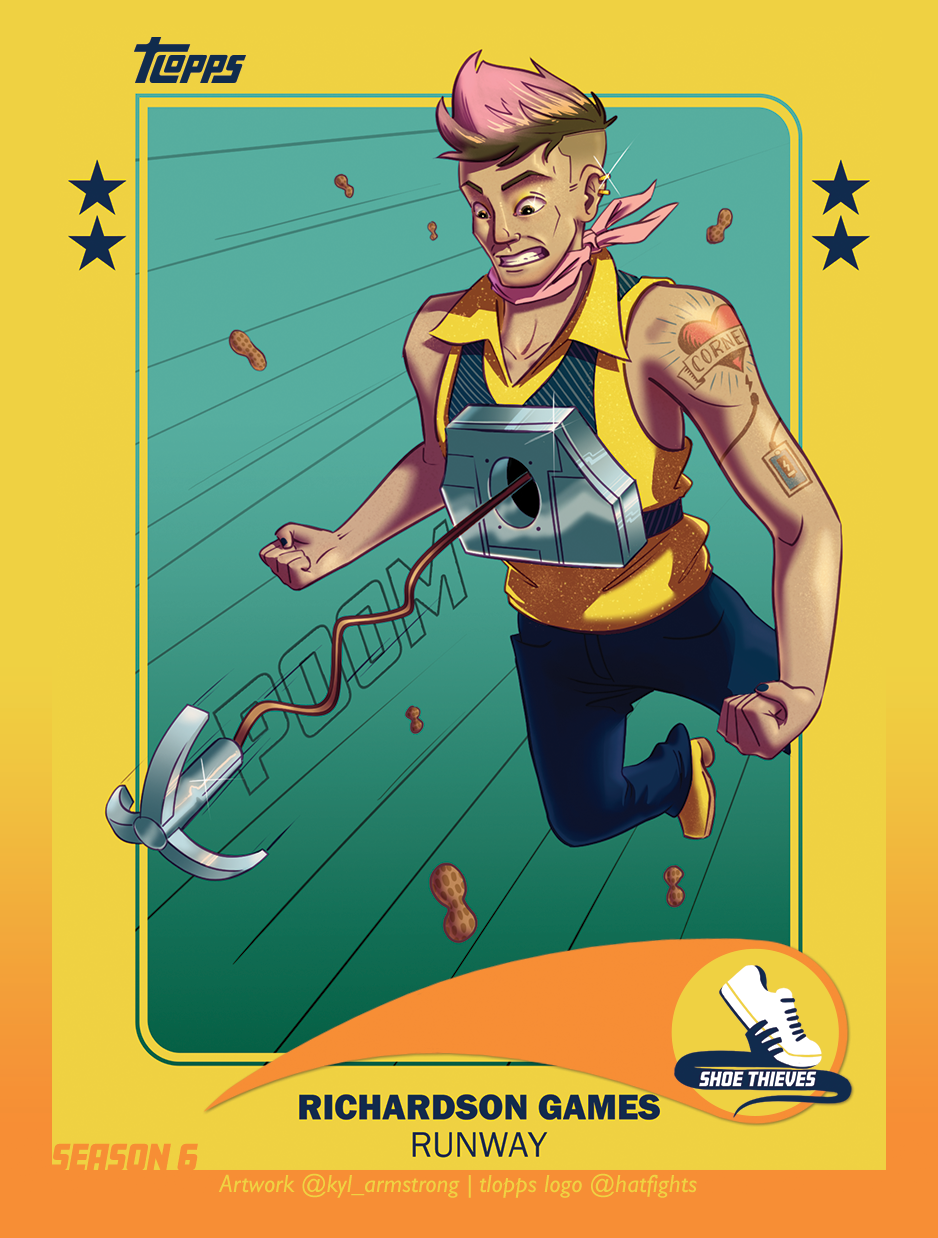 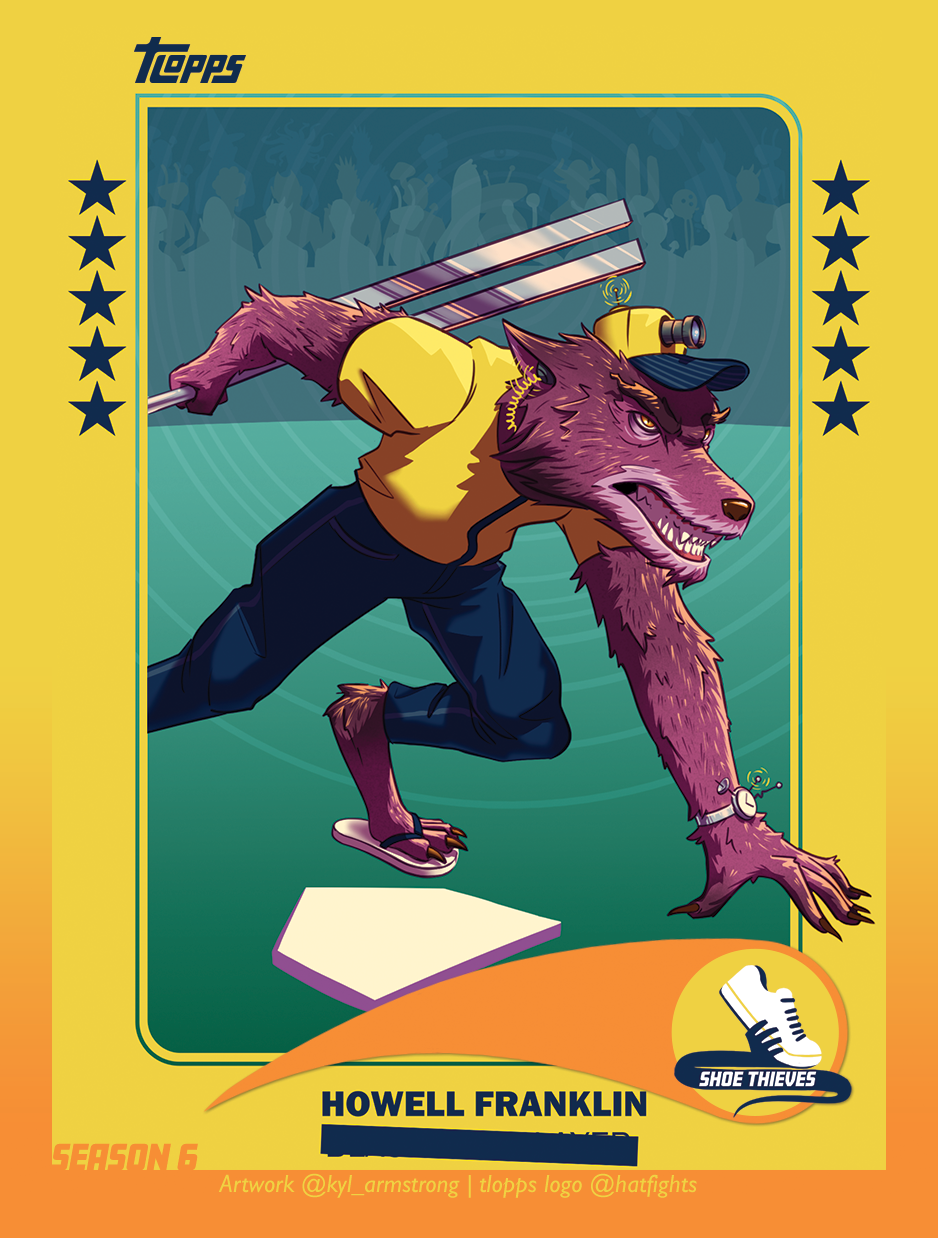 Howell Franklin, a player for the Charleston Shoe Thieves, as depicted in fan art. Kyle Armstrong/Provided 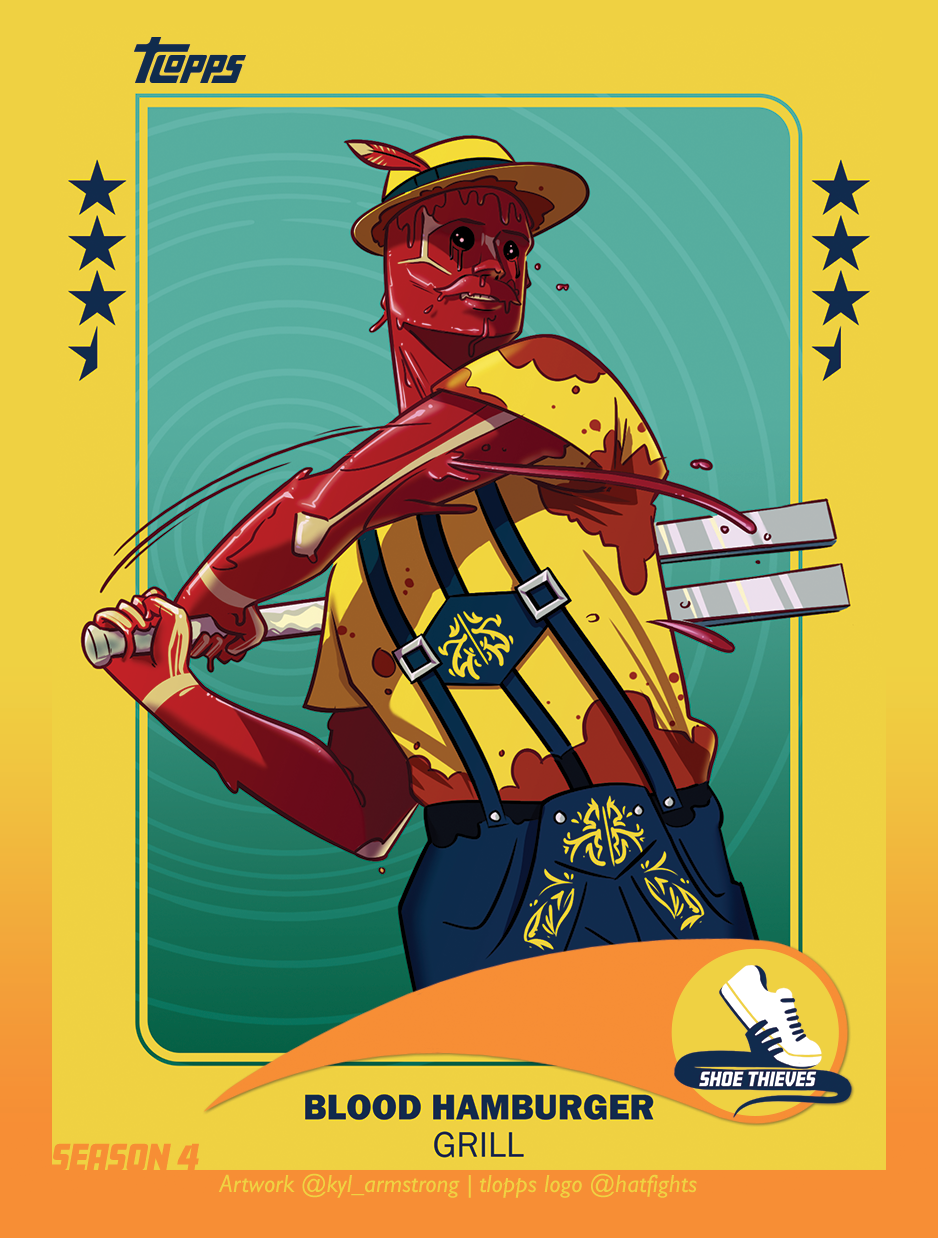 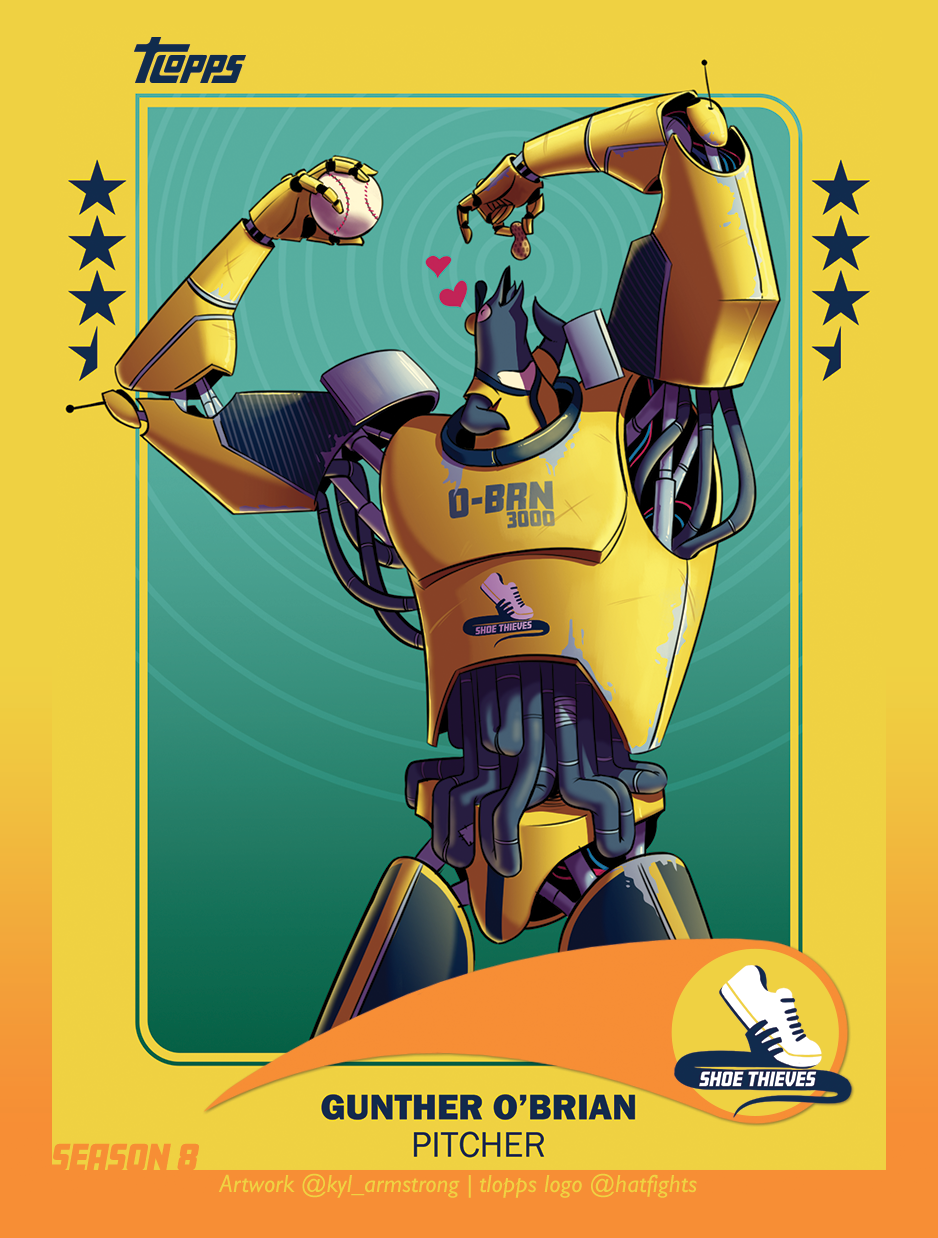 Beasley Gloom pitched for the Charleston Shoe Thieves for eight and a half seasons before being swapped to the Canada Moist Talkers on Season 9, Day 64. Jonathan Glenn/Provided

This hard-hitting hamburger homonculus, Blood Hamburger, is possessed by the spirit of a cow-demon. RollinKunz!/Provided

A college student studying neuroscience and film production is also a fan of blaseball. Here is her first art depiction of a Shoe Thieves player, Workman Gloom. Horse Hoffman/Provided

Howell Franklin, a player for the Charleston Shoe Thieves, as depicted in fan art. Kyle Armstrong/Provided

Everyone's heard of baseball, America's favorite pastime, but an online fantasy league called blaseball is taking over the internet during a year in which fans were barred from sharing a bag of peanuts and cheering on their team at the stadium.

Blaseball is not just your typical fantasy league, but a bizarre imaginary gaming sphere in which pitchers' stats improve for having 11 fingers and a giant peanut god can strike down base runners at a whim.

It's an imaginative realm, created in the midst of a pandemic that upended the sporting and events world, which draws in baseball fans and Dungeons and Dragons players alike. The result is an enterprising, and a bit nerdy, tight-knit community.

“It’s really like ‘geek church’ or a comic convention," offers one fan artist who goes by RollinKunz!

One team on the roster shares a name with the Holy City: The Charleston Shoe Thieves. That's because the game's animator, Cedric Adams, was born in Charleston and loves buying shoes.

The thing is, though, the Shoe Thieves' thousands of fans, who "watch" hourly online games unfold (really, the computer randomly generates game play and it's then discussed on the fan instant messaging platform Discord) are from all over the world, not just here in the Lowcountry.

"Blaseball players are all unique, be they ghosts, animals, robots or people of every shape, size and color. In the same vein, I’ve met fans from all over, from South Korea to British Columbia," offers Jonathan Glenn, a 23-year-old Charleston Shoe Thieves fan from Knoxville, Tenn., who has created accompanying art around some of his favorite players, like the team's former pitcher Beasley Gloom, whom he depicts as a bulldog.

How to "watch" blaseball

For those looking to "watch" a blaseball game, you first need to make your own free account at blaseball.com. Check out Season 1, Episode 18 of the helpful podcast "Take Me Out To the Blall Game" by Kimberly Dauber for a quick run-down of how to follow a game, which appears as names and numbers moving across the screen.

There's a great video at https://bit.ly/39C91Ld by Quentin Smith that gives an explanation of exactly what blaseball is and how you can follow it.

And for a video of what watching a blaseball game looks like, head to youtu.be/WpetElVfUI4 to get a feel.

It's the camaraderie between folks of all different backgrounds that truly makes blaseball such a unique and accepting community.

"I normally absolutely cannot stand sports," offers one fan artist who goes by Horse Hoffman. "But blaseball is just as accessible to any staunchly anti-league-sports person as it is to any longtime fan of the major leagues."

Blaseball's creators — Stephen Bell, Joel Clark and Sam Rosenthal of video game studio The Game Band in Los Angeles — made the game in July and didn't expect the farcical simulation to spur quite the giant fan base it has, currently ringing in at more than 30,000 folks on Discord.

"At the time, I remember being in the mental state of, 'I can't believe I'm working on this silly idea professionally. Let me just have fun with this and just let the ideas pour out,’” said Clark.

That's how player statistics got to be determined by things like "Shakespearianism," "chasiness" and "unthwackability."

There are rules, but the rules are not tied to reality, and the imaginative minds of the creators let absurdities reign.

Fans have a chance to have their say in what unfolds on the field outside of typical game play, as well. For instance, an inning might be interrupted by targeted incinerations of players, who end up in the "Hall of Flame."

It's a mismatch of sports, comedy and horror, all rolled into one.

It's "Welcome to Nightvale" meets "Angels in the Outfield" and "The Sandlot," offers Taquin Jackson, a local behind the Charleston Shoe Thieves Twitter fan account.

But that's what attracts so many creatives, from fan fiction writers to Twitter account creators to one 26-year-old from the United Kingdom who started a whole Blaseball record label called Fourth Strike. Its songs have racked up more than half-a-million streams across Spotify and Bandcamp.

"We definitely hoped that people would like the game, and we've tried to create a space for the fans to inject themselves into the experience, but we could never have foreseen the degree to which they've run with it," said Bell.

Among blaseball teams are the Kansas City Breath Mints, San Francisco Lovers and Canada Moist Talkers. But the Charleston Shoe Thieves have captured the hearts of those with a flare for the dramatic who like to root for the underdog.

It's really the creative characters on the team who have drawn fans in.

"I chose the Shoe Thieves because I loved the name. I stuck around for the players and their descriptions that inspired me to draw," offered fan artist Kyle Armstrong from Austin, Tex.

Among those descriptors were "a 13-foot-tall Halloween skeleton," "the biggest woman in blaseball" and "an enamel monster." He ran with those ideas and created "blaseball cards" depicting his favorites.

Kiersten Hoff, an 18-year-old college student from Northern Illinois, selected the Charleston Shoe Thieves because of the story lore. There's Jaylen Hotdogfingers' death and resurrection, the "Grand Unslam" and the peanut fraud fiasco of Season 3.

Hoff was drawn to a team favorite, Gunther O'Brian, for her illustrations.

Imagination runs wild not only in the game but accompanying fan art. It only makes sense, since the site’s graphics are barren. It’s up to artists to help fill in the fiction for others. That's part of the fun.

And while "Charleston" might apply to many different cities around the globe, a concept debated among blaseball followers, the Shoe Thieves' stadium is located in "Mount Pleasant" according to fan lore.

That sounds local to me — well, as local as you can get other than the Charleston RiverDogs, of course.

What is "Blaseball" and why is it taking over the Internet?