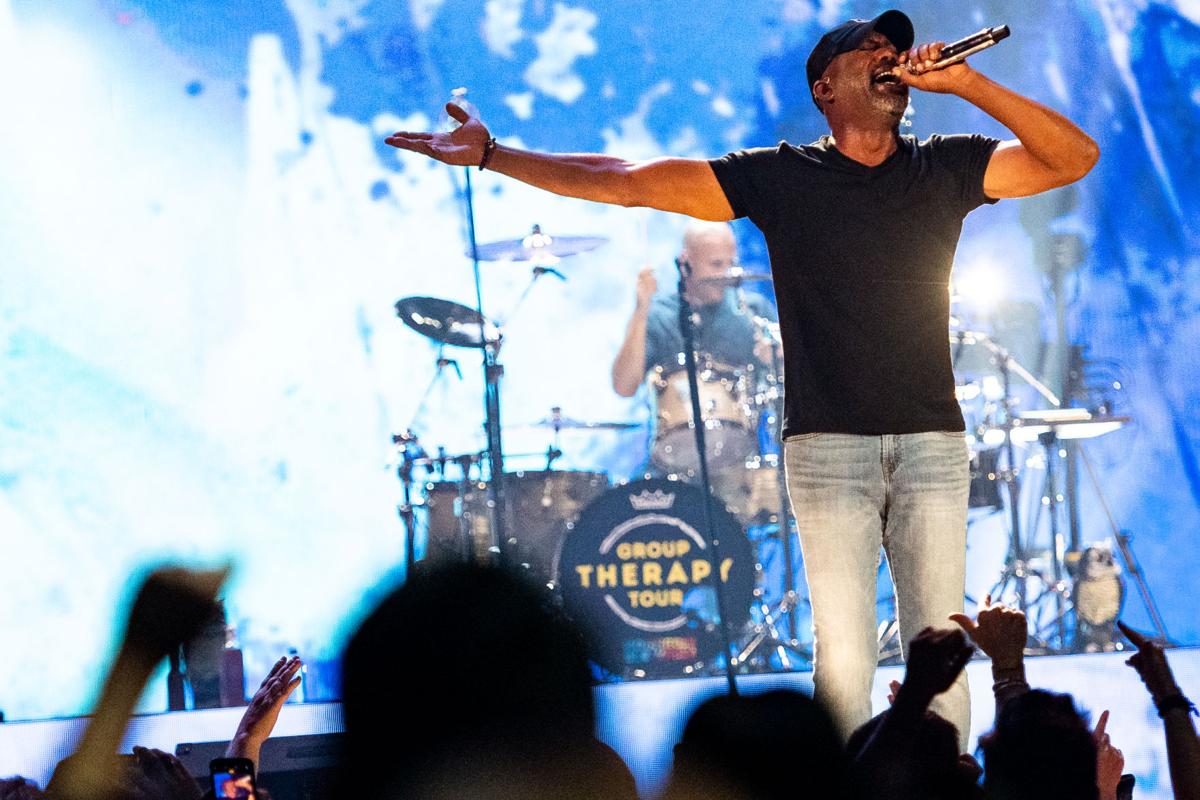 Darius Rucker sings with Hootie & the Blowfish at Colonial Life Arena in 2019. The band's HootieFest in Cancun, Mexico, is still on for January despite omicron concerns. File/John A. Carlos II/Special to The Free Times 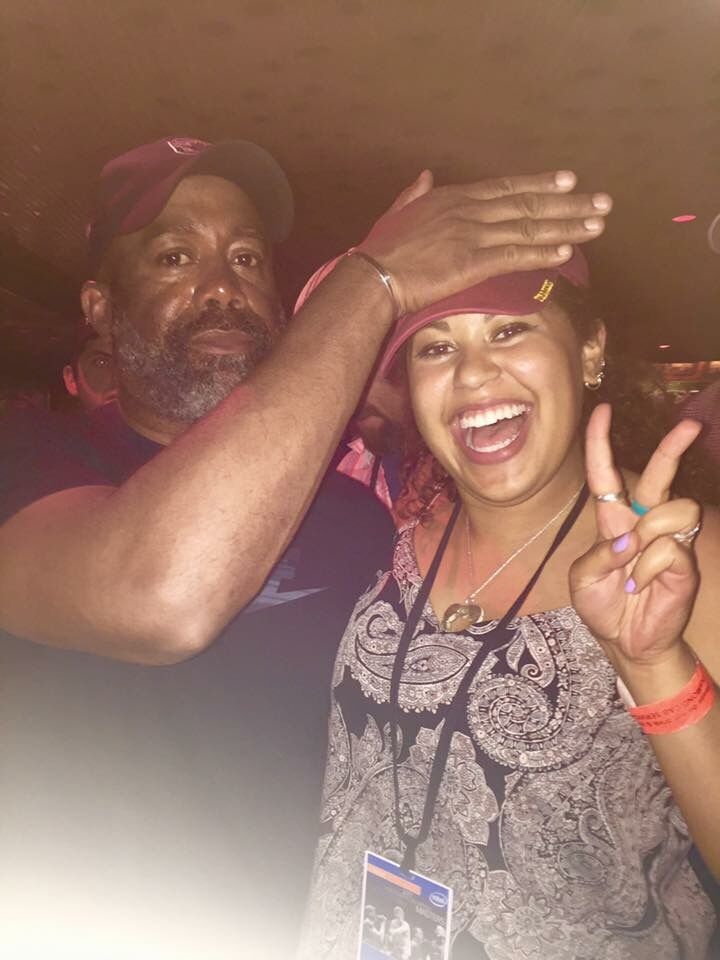 Jennifer Bayne, a longtime fan of Hootie & the Blowfish who purchased tickets to January's HootieFest in Mexico, poses with Darius Rucker at a show. Bayne is among ticketholders hoping the festival will be postponed due to the omicron surge. Provided

A music festival in Cancun, Mexico, featuring three headlining performances by South Carolina's longtime rock stars Hootie & the Blowfish is still set to go on this month, even as the omicron variant of COVID infects more people daily and despite last week's cancellation of another festival at the same location by the same organizers.

HootieFest: The Big Splash, an inaugural four-day extravaganza on the beach at the Moon Palace resort, is slated for Jan. 26-29, just weeks after the Dead & Company's destination festival Playing in the Sand was canceled after headliner John Mayer, along with other performers and staff members, tested positive for COVID-19.

The Playing in the Sand event required proof of vaccination to attend, while HootieFest does not.

Both festivals were organized by entertainment promoter CID Presents.

Even before Playing in the Sand was canceled, HootieFest ticketholders were growing concerned about the rapid spread of the omicron variant and its possible effect on their travels. They fear losing thousands of dollars in prepayments. Still, the promoters are undeterred, even as they shut down Playing in the Sand by acknowledging the spike in COVID cases.

Looking cautiously ahead to South Carolina festivals, openings, sports in 2022

"With much sadness and after great consideration of every possible scenario, the Playing in the Sand shows in Riviera Cancun on January 7-10 and January 13-16 have now been canceled by CID Presents due to the spiking COVID-19 cases," the company posted to social media the day before the festival was supposed to begin. "Dead & Company and CID Presents tried everything possible to bring normalcy and to deliver a great experience and amazing music, but with each day it became increasingly clear that canceling is the correct thing to do for the fans and for our crew."

Representatives for Hootie & the Blowfish, along with several other bands slated to play the festival — the lineup includes Barenaked Ladies, Blues Traveler, Sister Hazel, Drivin N Cryin, Better Than Ezra, Toad the Wet Sprocket, Spin Doctors, Toadies, Cowboy Mouth and Occasional Milkshake — did not return The Post and Courier's requests for comment.

The federal Bureau of Consular Affairs shared with The Post and Courier its travel suggestions at this time.

"We advise U.S. citizens traveling internationally to make contingency plans as their trip may be disrupted due to quarantines, travel restrictions, and other factors. It may also become difficult to arrange travel back to the United States."

In addition, the federal Centers for Disease Control and Prevention has issued a Level 3 travel health notice for Mexico due to COVID-19, indicating a high level of COVID-19 in the country. The United States is a Level 4, the highest risk.

Since the festival is not offering refunds at this time, patrons are choosing between losing thousands of dollars spent on tickets or risking traveling and attending during a pandemic surge.

According to HootieFest's purchase policy, tickets are non-refundable, and a third-party travel insurance was recommended.

Kristen Smith Sweeney, who bought tickets with her husband for the festival in August, said she is vaccinated and boosted but concerned about travel snafus.

Her flight has already been changed to a later time that would cause her to miss out on the entire first day of music, and she's concerned about other variables.

"This is not about being afraid of getting sick," Sweeney said. "It’s about leaving our children and heading to another country where we could very possibly get stuck in quarantine. In addition, the travel delays and flight cancellations create an air of uncertainty as to if and when we would even make it there."

The festival's COVID-19 policies have been updated numerous times. Currently, requirements include a negative PCR test no more than 96 hours prior to check-in and a negative antigen test for departure back to the United States within one day of the returning flight.

For those who test positive, the resort is providing a room for five additional nights of quarantine at no cost, but after that it will ring in at $199 a night until a negative COVID-19 test is acquired.

Sweeney said she and her husband spent around $5,600 for five nights at the resort. It was her 40th birthday present.

"We cannot afford to flush $5,600 down the drain," she said. "We are praying that the band and/or promoters allow an out for those of us who just cannot leave our children with no true guarantee of when we’d return."

CID Presents emailed The Post and Courier the automated response the company has shared with ticketholders thus far.

"CID Presents will continue to monitor relevant recommendations and guidelines imposed by local authorities and the World Health Organization to ensure a safe experience for all guests," the response reads. "We have taken many steps to produce a safe event for you and the artists performing at the events, including testing and/or vaccination requirements and hope that these steps bring an added peace of mind so that you may come join us in Mexico. If, for circumstances outside of our control, it is deemed unsafe to produce this event, a full refund will be issued on the credit card used to purchase. Please Note: Only guests with a valid package in good standing on payments would be eligible to receive a refund if the event was cancelled."

Jennifer Bayne, a Realtor and longtime Hootie fan who has taken her daughter to concerts since she was 5 years old and even sang carpool karaoke with Darius Rucker, said she's reached out to the resort to discuss a refund several times to no avail.

"No one answers the phone, and the recording directs you to the website, and then no one responds to emails," she said. "My credit card company is going to dispute the charge if we cannot get satisfaction from the resort."

Bayne said she was so looking forward to the festival when she booked tickets this summer but is now terrified of getting sick and hospitalized in Mexico with a language barrier.

"We need to postpone until we can all gather safely," Bayne said. "If they won’t postpone then we need a refund option for those with concerns."

Another ticketholder, Christie Crone, has been pushing out the hashtag #postponehootiefest. She said she's received a lot of positive response from fellow patrons frustrated by the lack of response from festival organizers and no refund option.

"There are a few people who are still excited about attending and, of course, think we are selfish for trying to change the event," she added.

In response to a promotional post on Instagram for the event in early January, several ticketholders responded with pleas for organizers not to cancel.

Crone, who planned to attend the festival with a large group of friends, said her biggest concern is contracting the virus and getting stranded in Mexico. Since she purchased a four-night package with the resort instead of a five-night package, she also wouldn't be eligible for the five-day free room offer for those who contract COVID-19 on-site.

Despite some of her friends purchasing "cancel for any reason" travel insurance, Crone said that only covers 50 percent to 75 percent of money already spent and would still incur a loss of several hundred dollars, if not more than $1,000.

Beyond the money, she feels disappointed in one of her favorite bands.

"The inconsistent protocols and lack of regard for fans and guests’ health and safety is just disheartening," said Crone. "Hootie & the Blowfish have already canceled their annual Monday After The Masters event twice for the pandemic. They obviously had a consideration for their own health and safety, as well as their friends and fans, during that time. Why are they not thinking about the risks to those who support them enough to spend thousands of dollars during a pandemic to travel internationally for this event?"

Even in the case of cancellation or postponement, incidental expenses such as transportation expenditures, hotel reservations and rental car costs would not be covered, according to the festival's ticket policy.

But at least it would be better than losing everything or risking quarantine in Cancun, Bayne suggested.

Crone just hopes that the band and organizers will "do the right thing."