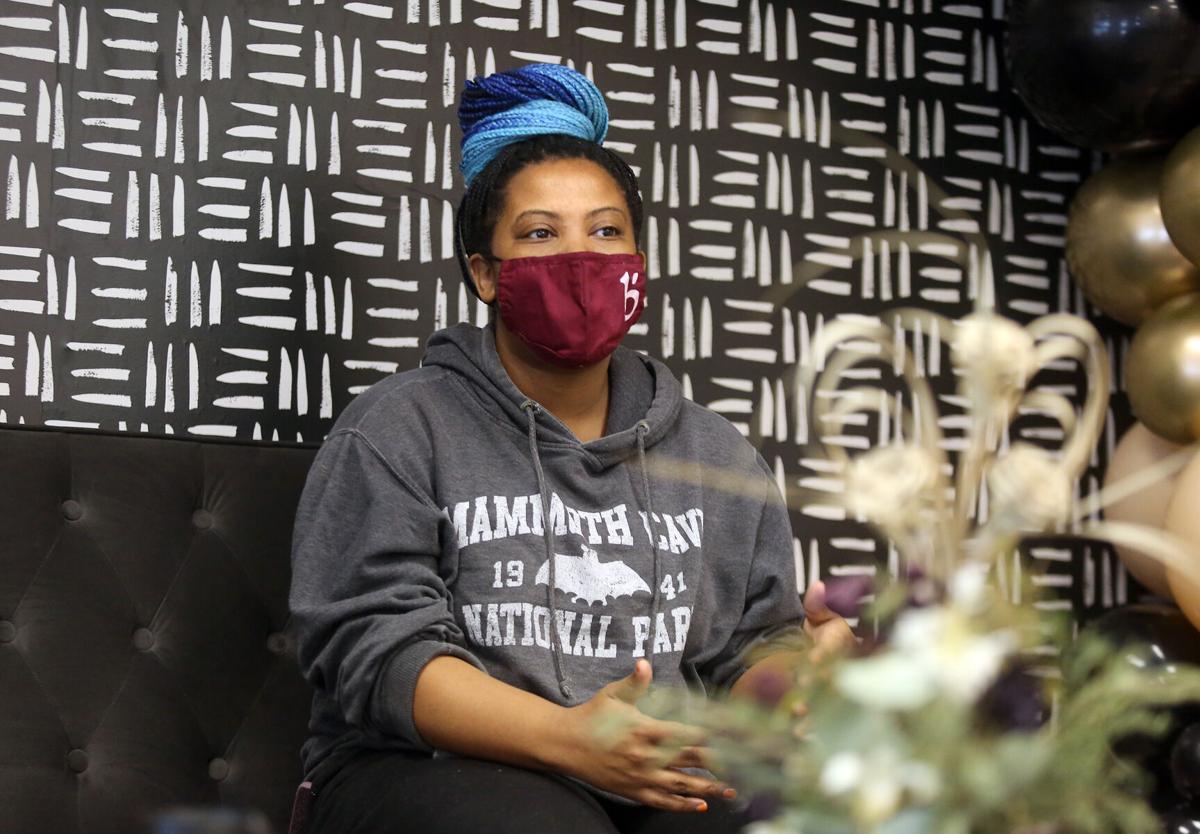 Andrea Davis talks about the soaps she creates at her Motherland Essentials warehouse in Summerville on Tuesday, Jan. 12, 2021. Brad Nettles/Staff 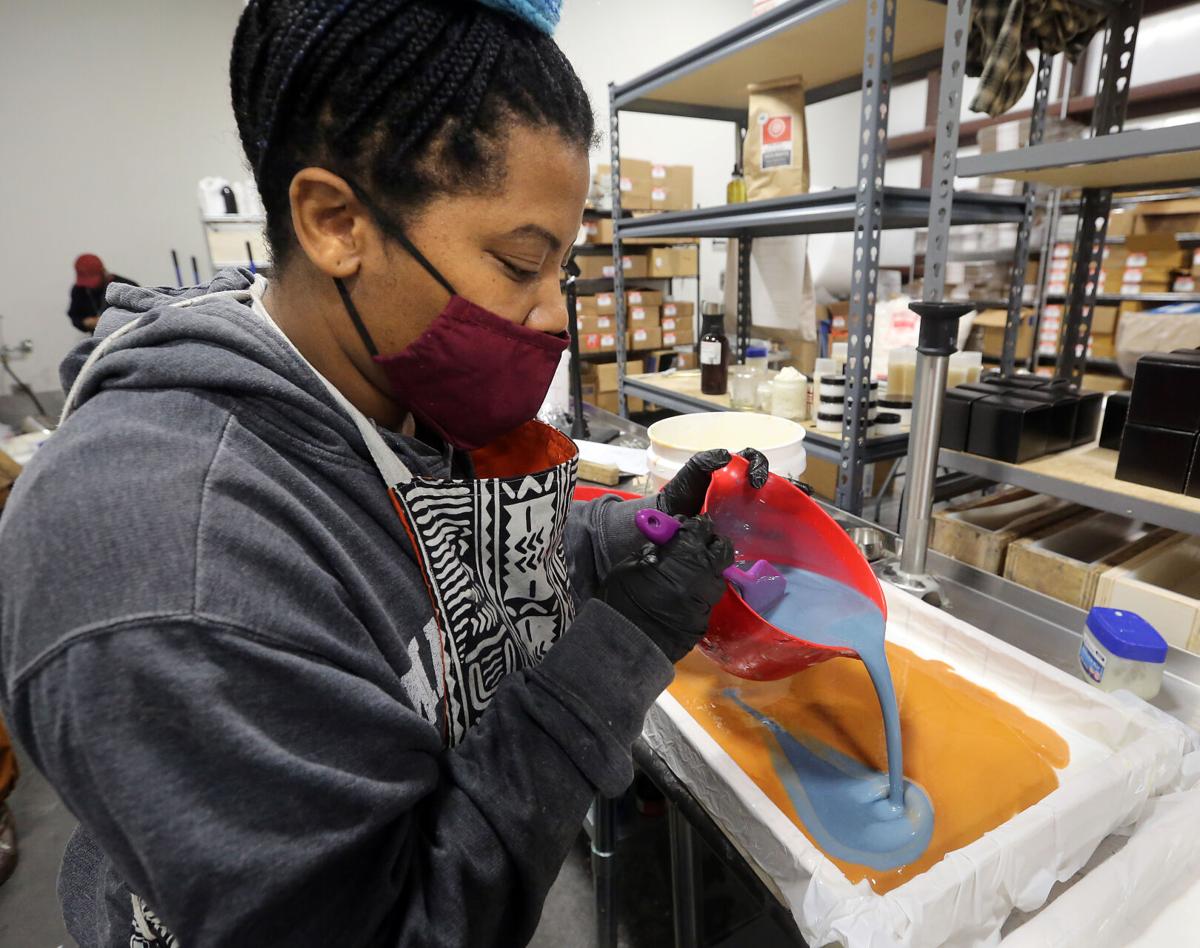 Andrea Davis pours her handcrafted soap and colors into a container at her Motherland Essentials warehouse in Summerville on Tuesday, Jan. 12, 2021. The container will rest for 24 hours before the soap is cut. Brad Nettles/Staff 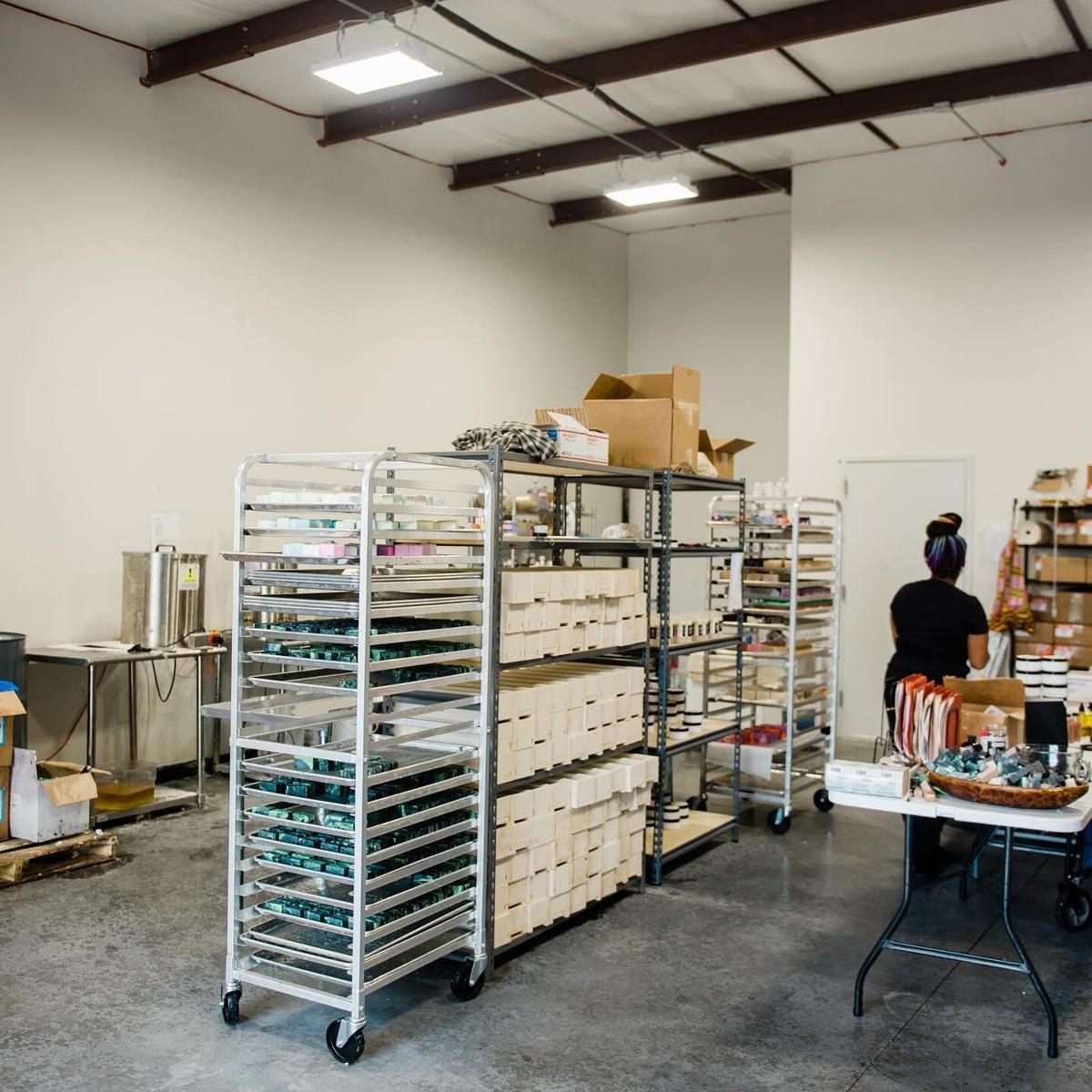 The new warehouse space for Motherland Essentials includes much more room than owner Andrea Davis' garage initially offered. She is still looking for a new sink, if anyone wants to make a donation. Provided 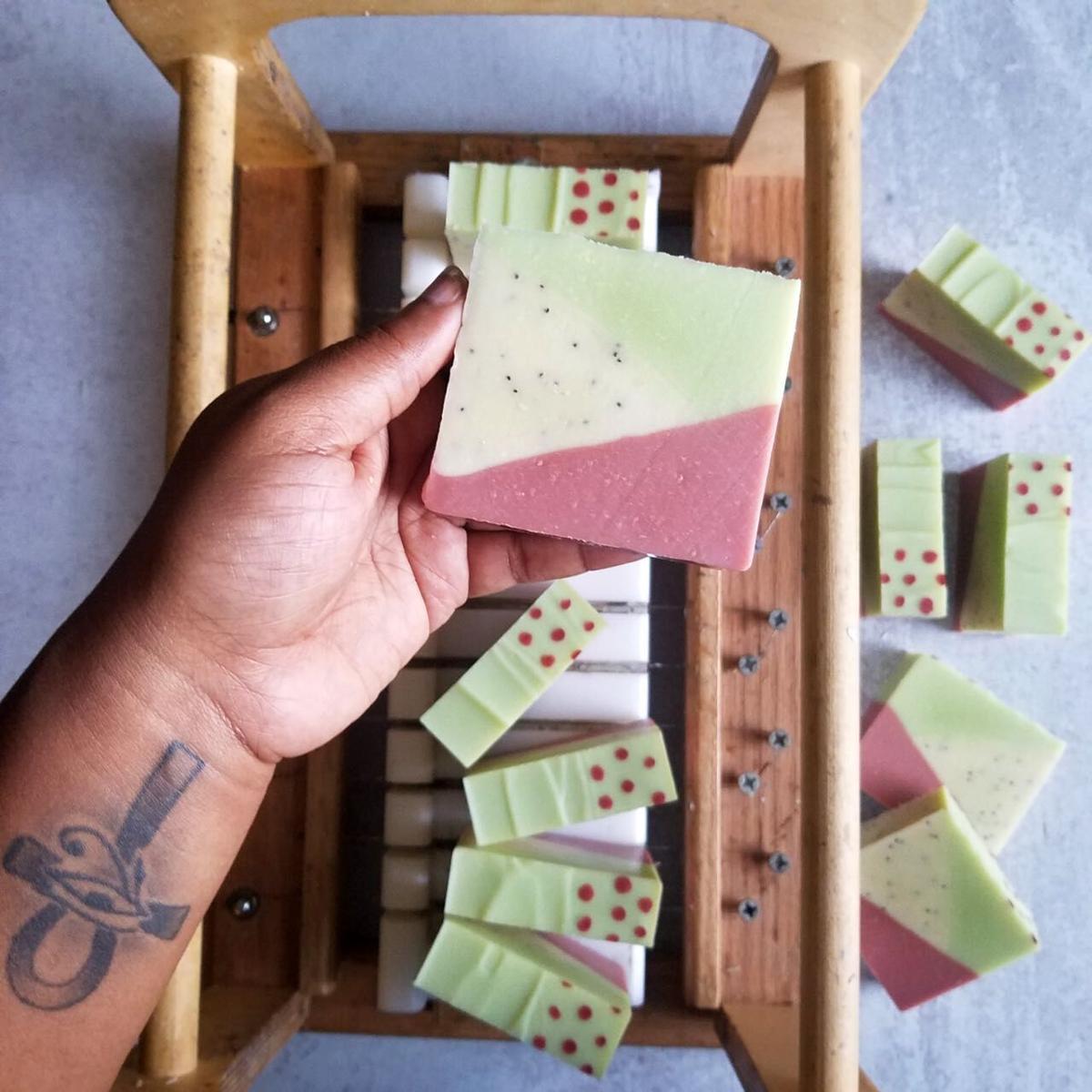 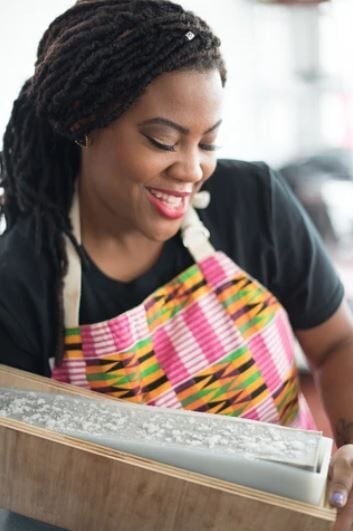 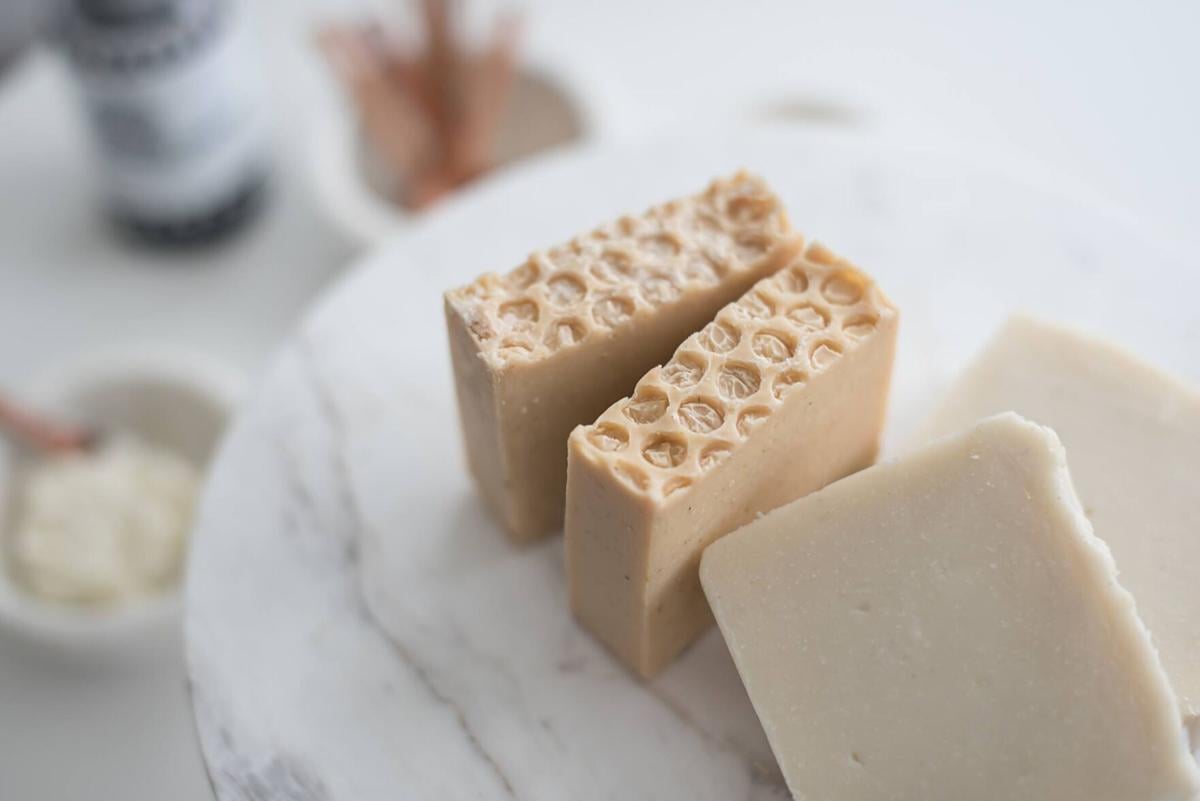 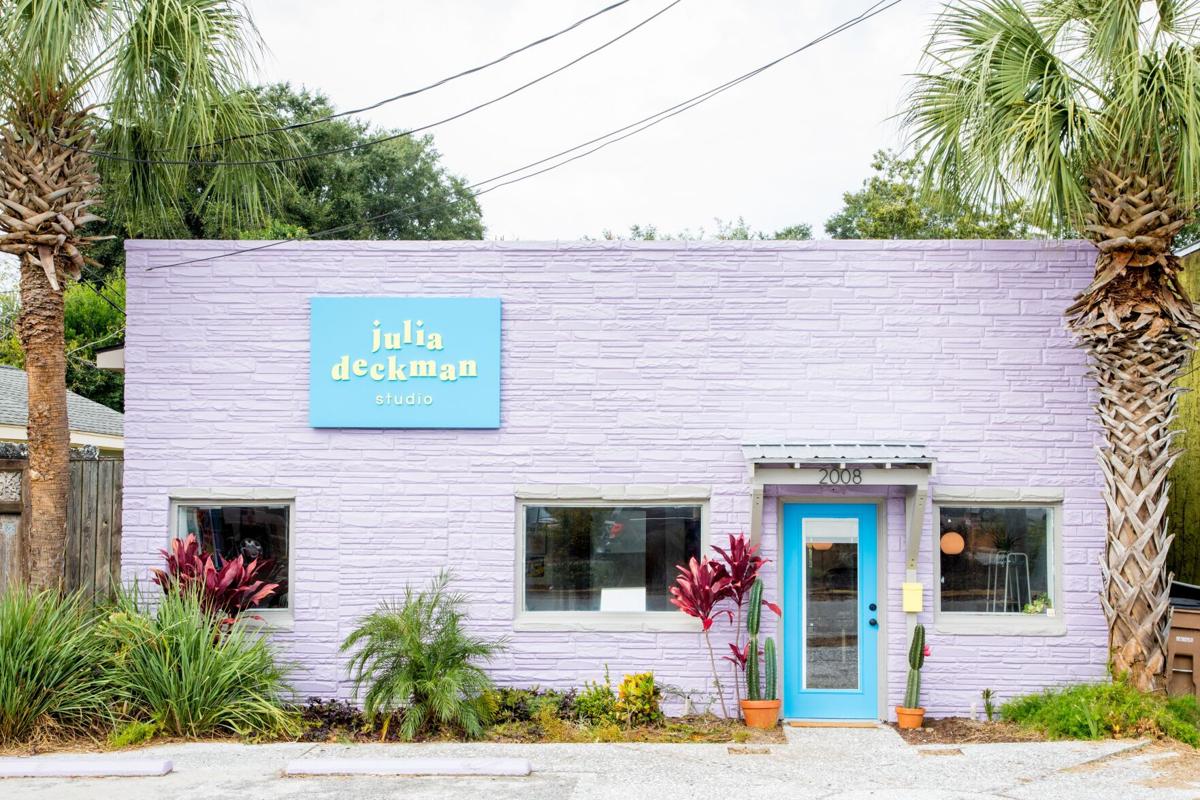 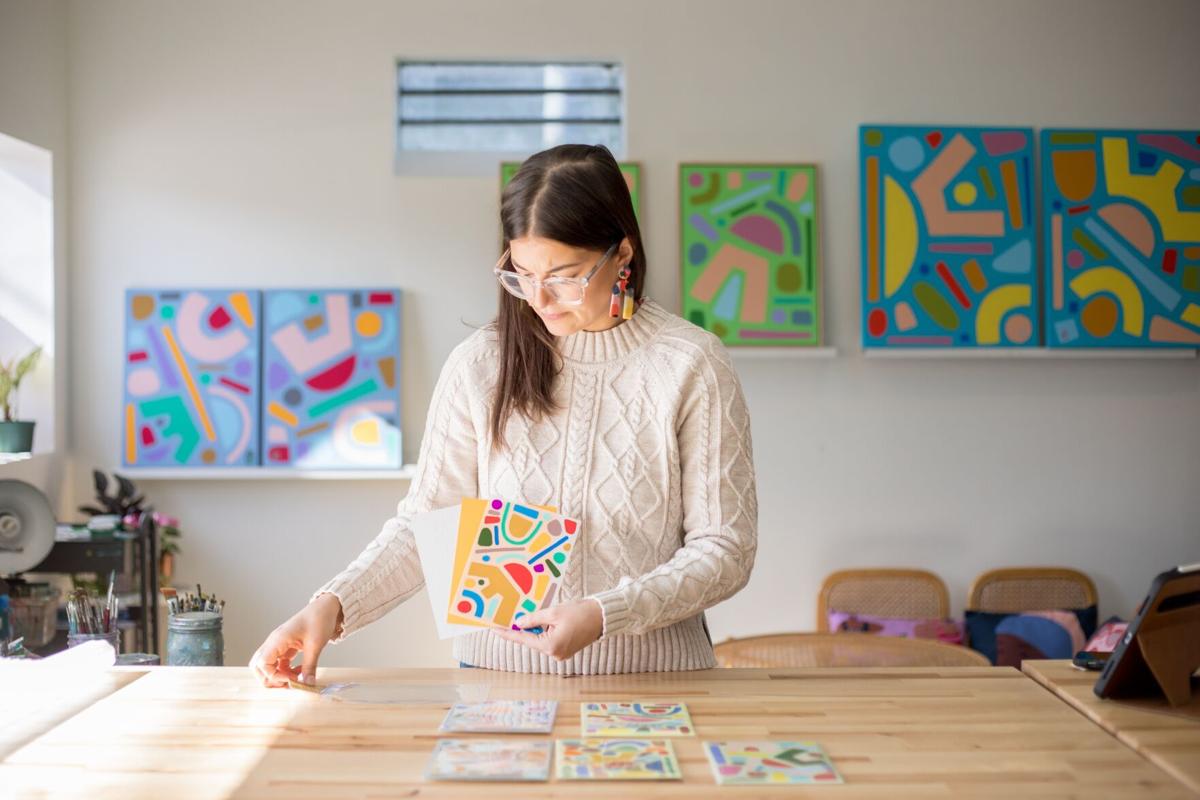 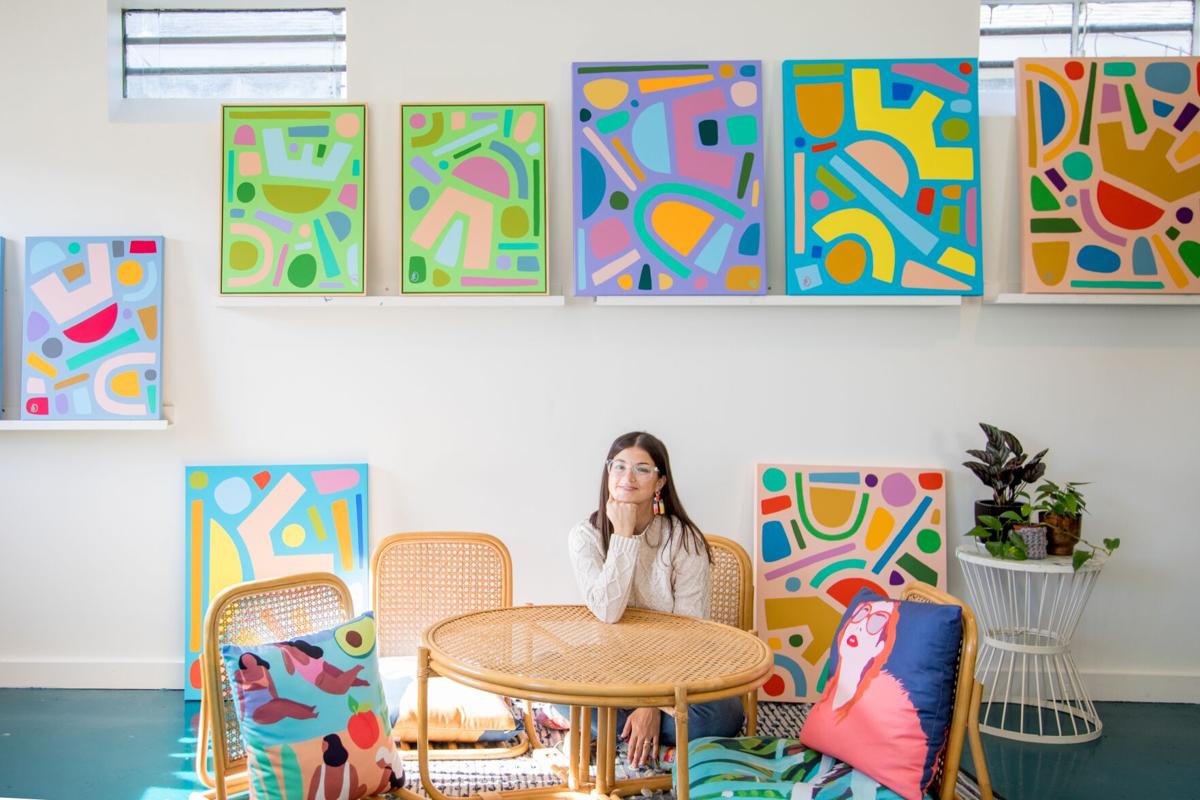 Julia Deckman is known for her colorful artwork. Kate Blohm/Provided 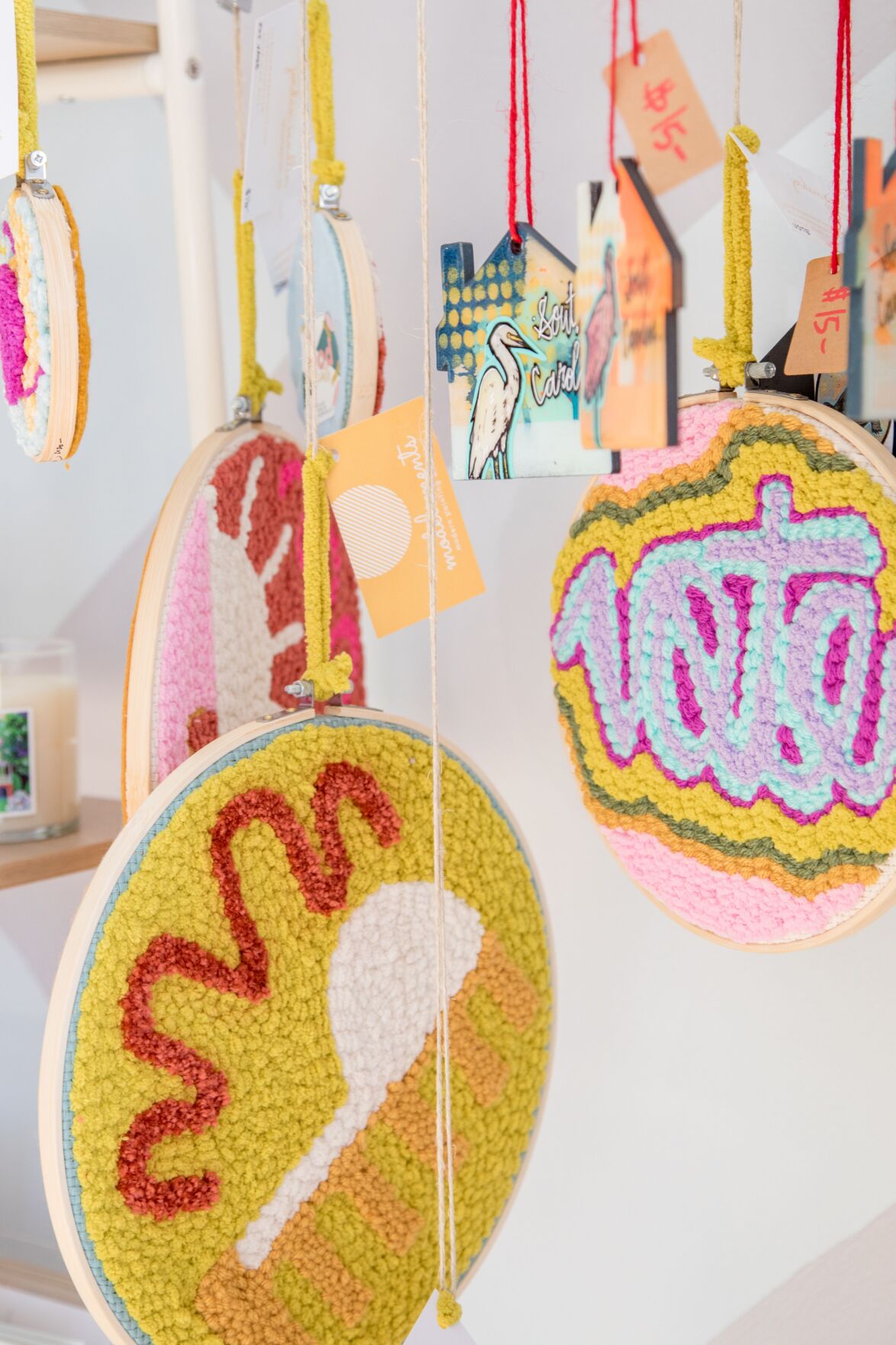 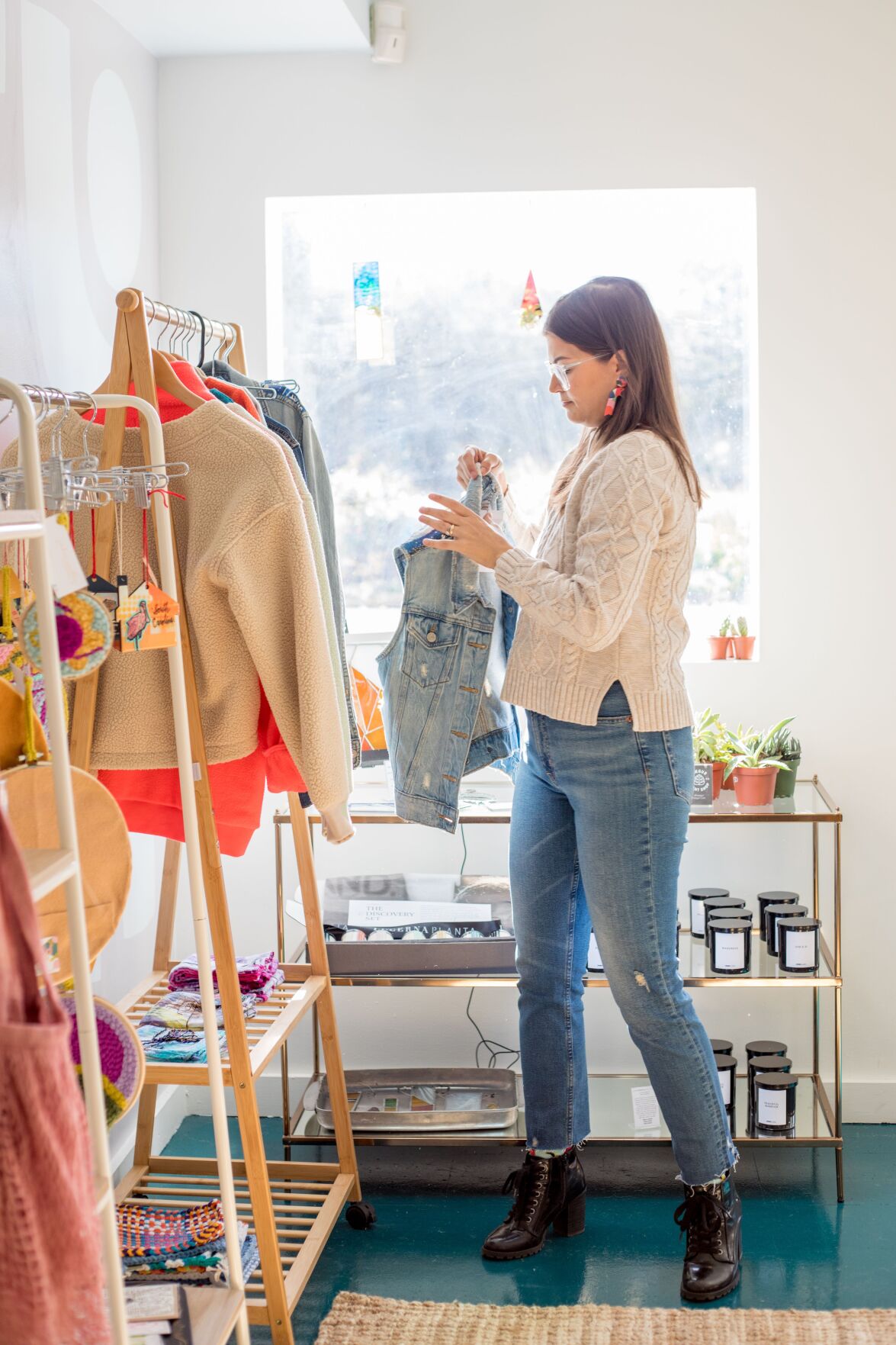 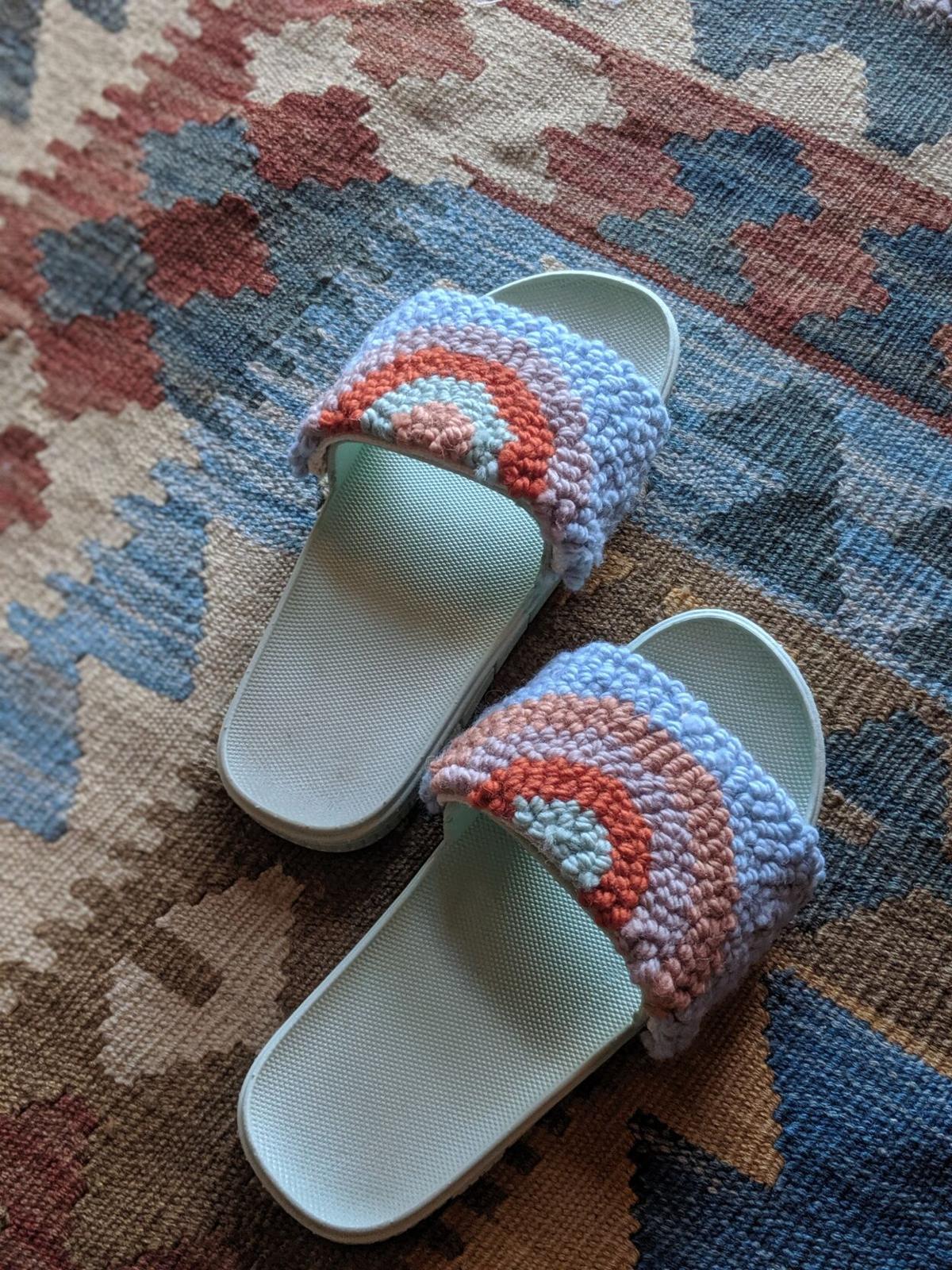 Andrea Davis talks about the soaps she creates at her Motherland Essentials warehouse in Summerville on Tuesday, Jan. 12, 2021. Brad Nettles/Staff

When two local creatives moved into new, larger spaces at the end of last year, neither knew where the funds to keep up the rent payments would come from.

Andrea Davis, soapmaker and skincare product creator of Motherland Essentials, raised just over $15,000 in crowdfunding to secure the lease for her storefront and warehouse space in Summerville. Julia Deckman, a local artist with a small studio at Redux, was approved for a loan to move into a larger shop and workspace on James Island.

Both are now nearing the end of their funds, with hopes to keep supplying monthly rent via sales, workshops and community collaborations.

Black, gold and pink balloons lined the awning at Motherland Essentials' new space following the shop's ribbon-cutting in mid-January. Davis, wearing a black-and-white graphic apron, poured the colorful contents of a row of buckets into a tabletop tray to create tangerine and cobalt liquid swirls.

She was teaching employee Khari Lucas, a local musician who goes by Contour, how to make one of her popular artistic bars of soaps. This one was citronella and lemongrass. Turmeric and kombucha, lavender mint and vanilla coffee are among her other eye-catching and natural ingredient-based concoctions.

Before moving into the Summerville location, Davis worked from her garage, and when she started her business in 2016, she was mixing chemicals in her kitchen.

A bulk order of more than 17,000 bars of soap in July motivated her to move out of her house. Now, she works alongside a staff of fellow creatives, including a poet, musician and videographer, in a retail space, office area and warehouse. Modern jazz plays over the speakers; a tote bag promoting Black-owned businesses hangs on the coat rack.

"With COVID, it wasn't a comfortable situation to bring people into my garage," offers Davis, one reason for the move.

Not to mention the 400-pound drums of coconut oil.

When Davis decided to bring helping hands into her growing business, she did it thoughtfully. She wanted to support other Black creatives, and for future workshops and events that are already being brainstormed, she hopes to collaborate with other Black-owned and small local businesses. She already partners with nonprofit organization Fresh Future Farm.

"I want this space to be not just for me and my business but the community," says Davis. "If COVID has taught us anything, it's that we have to lean on community. We can't depend on monetizing every little thing. At the end of the day, we have to take care of each other."

Care was a piece of the puzzle missing at Davis' former job at a large corporation. She lost a child 20 weeks into her pregnancy back in 2014 and was offered three days of bereavement by the company. She knew there was no way she could grieve in that short amount of time and be ready to work again.

So, she quit and turned to soapmaking as a catharsis. Davis' current employees receive mental health days and are treated as fellow humans and not numbers in a business model. Davis also prices her soaps low, with a thin profit margin, to be accessible to as many people as possible.

"You can care about people and not lose a ton of money doing it," Davis says.

Julia Deckman's collaborations in her new retail space also speak to her message of supporting new and struggling artists in the ways she can. It's not about profit but about making human connections.

"My vendors, I either buy things from at wholesale or we do a commission split, and it is my intention to keep that split as low as possible," says Deckman. "I'm just passionate about that because I know how hard it is to find those opportunities to exhibit and sell and when you do, it's often not monetarily worth it."

Deckman wanted to give artists an opportunity that she found hard to come across along her own art journey. And the result is a quirky variety-pack of art from more than 15 local creatives that's for sale in the retail portion of her studio.

"I'm considering myself like a unique gift shop or creative home decor," she says. "There are so many different ways to express yourself creatively; it doesn't have to be fine art."

In addition to her studio space and retail space up front, there's a back room that can be used for exhibits. Though she's not trying to compete with local galleries, Deckman wants the multipurpose building to continue to benefit a multitude of local artists.

One who's already benefitting is Daisy McClellan, a punch-needle artist who recently moved to the area from California. On the West Coast, McClellan ran a collaborative space called Gather that featured more than 100 artists; she's used to teaming up with other creatives and was happy that Deckman gave her the chance here in Charleston.

"I think I found her on Instagram and just dropped by her studio and immediately felt like, OK, this is it, this is the spot," McClellan shares. "It has only locally made goods, and the art is cool, and it's not just for tourists, you know?"

McClellan found a kindred spirit in Deckman, and her punch-needle creations are now for sale in the retail portion of the space. McClellan also makes jewelry and candles, among other crafts, that she plans to teach at upcoming classes at the studio. She hopes to collaborate with even more local artists and do her part to help build the creative community here, like she did in California.

"My philosophy has always been 'the more the merrier,'" says McClellan. "If you're worried about someone moving down the street from you with the same business, it's really only going to help your business."

Deckman, who won the Coastal Community Foundation's award for Artist of the Year in 2019, has strongly felt that sense of camaraderie and collaboration, not competition, in the Charleston arts scene. She, like McClellan, has a desire to keep that spirit alive and thriving, with goals that Charleston's creative scene will continue to expand and look more diverse.

"I feel like this is a place for my community first and foremost," Deckman says.

No Coke, but free-flowing community. At a beloved Charleston cafe, it's part of the art.