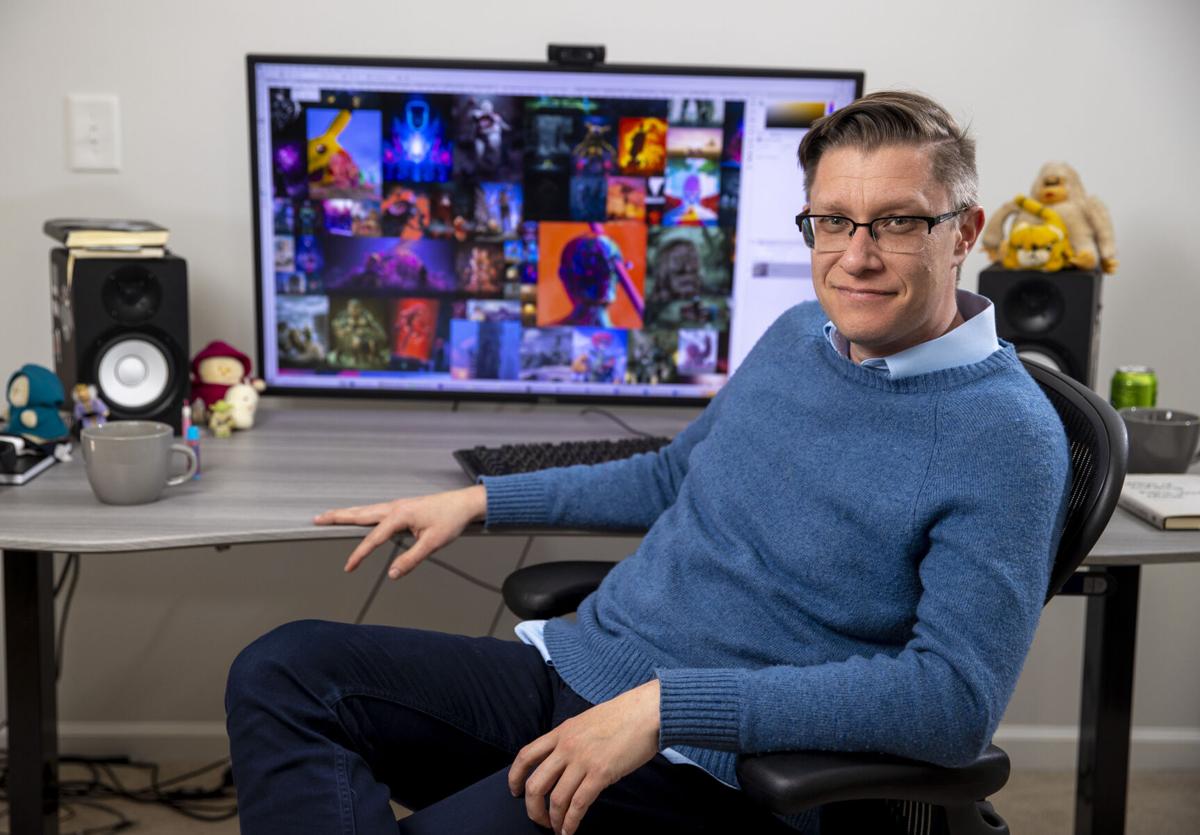 Mike Winkelmann, who goes by Beeple, is a digital artist who has made millions in the digital art collection landscape, which he's helping to pave the pathway for. His art has been featured in a Louis Vuitton collection, at Justin Bieber concerts, at the Super Bowl and is currently being auctioned by Christie's. Andrew J. Whitaker/Staff 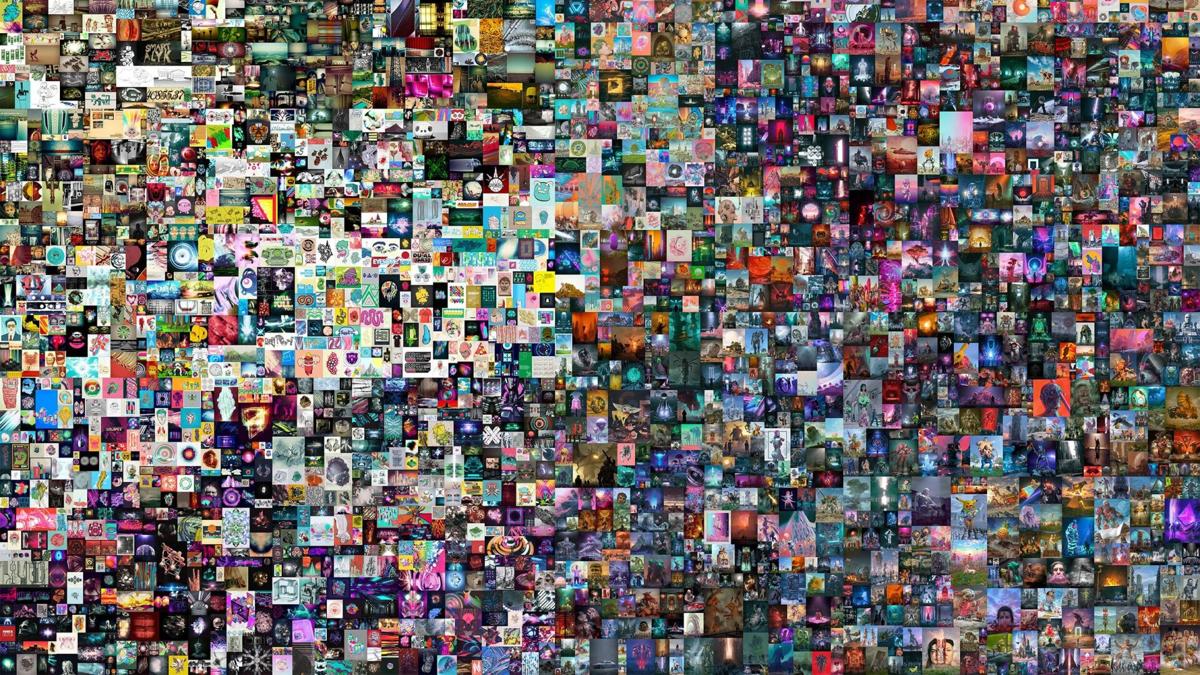 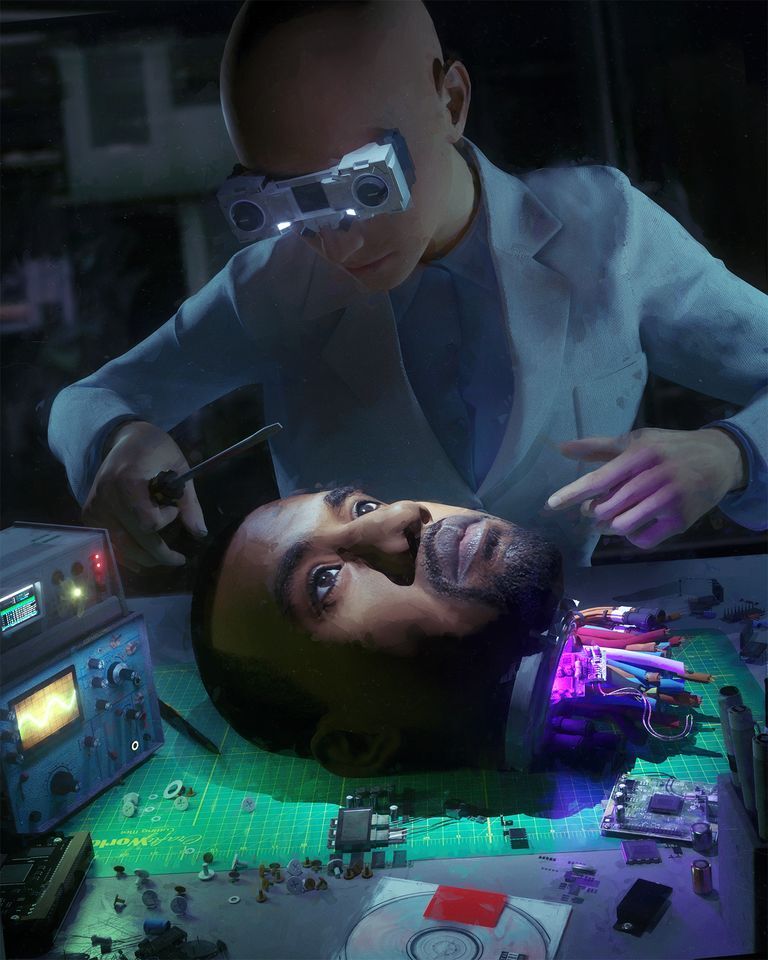 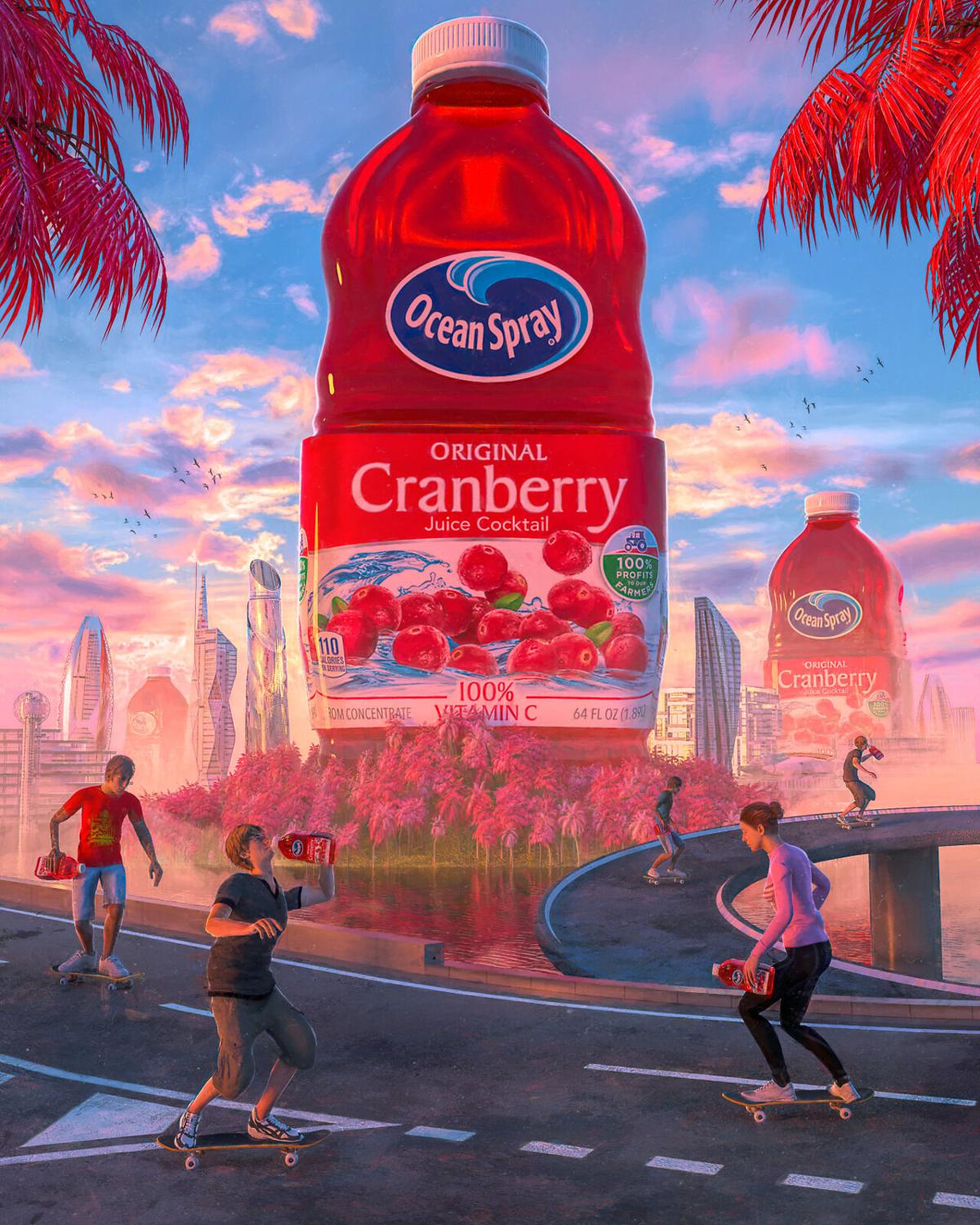 NORTH CHARLESTON — In a business-casual pullover sweater and slicked-to-the-side hair above a pair of rectangular glasses, Mike Winkelmann doesn't look like he's a groundbreaking digital artist who has rendered images of a giant fire-breathing koala bear and headless robot turkey.

He looks like a 30-something dad who might have a Yoda figurine on his office desk and spend a lot of time at the computer. Which, well, he does.

Winkelmann, who goes by artist name Beeple, is an unassuming guy who lives in a middle-class neighborhood in the Ladson section of North Charleston with his wife and two kids. He moved to the Lowcountry from Wisconsin in 2017 in search of milder winters and spends most of his time at home or on Folly Beach when the weather's nice.

When it comes to a fraught country, arts money changes everything

What you wouldn't guess about him is that he made $3.5 million from art sales in one weekend a couple months ago in an astonishing move that is breaking the frame on digital art collection.

As of Feb. 25, Winkelmann's work is the first purely digital, non-fungible, token-based (NFT) artwork to be auctioned off by a major auction house. His piece "Everydays: The First 5,000 Days" is being offered for sale by Christie's, a 255-year-old global auction house that three years ago sold a Leonardo DaVinci painting for $400 million.

Winkelmann's piece is expected to fetch millions. In fact, one of his original works just resold on Feb. 24 for $6.6 million.

"The market can say it's worth a stupid amount," Winkelmann said. "And I'm like, 'You guys said that. Not me.' "

Unlike a traditional art auction, there's no physical copy being bought and sold. Instead, there's a digital copy of Winkelmann's piece that has a unique encrypted token with his artist signature, making it identifiable on the blockchain and thereby verifying its authenticity.

It's kind of like how cryptocurrency like Bitcoin can be verified through its blockchain, a digital ledger of sorts. Each coin is represented by a singular code that identifies it as one-of-a-kind, and thus legitimate.

So even though the same digital image might appear on Winkelmann's Instagram feed — one that's seen by 1.8 million followers — only one collector can claim ownership.

Winkelmann is one of the first to find success in the newfound NFT art world. He's still reeling off it.

"I didn't invent this format, but I was just in the right place at the right time," he said. "If you're picturing a boring dork who doesn't know what ... is going on right now, yep, that's me."

His big sale might have happened in December, but Winkelmann has been creating a digital art piece every day since May 1, 2007. He started out with drawings he describes as "what a pretty talented 8-year-old might make." At the time, he was 26 years old.

He's since evolved into 3D animations he creates on a program called Cinema 4D. With that he's posted a digital piece of art before midnight strikes every day for the past 13 years — yes, even the day of his wedding and when his wife went into labor — he calls them "everydays."

His full collection, 5,000 renderings compiled into one jpeg, is what's now selling via Christie's.

The everydays can take anywhere from minutes to hours, depending on the technicality and inspiration.

"It doesn't need to be this precious thing, where I'm in an immaculate mindset of an artist hiding away and inspired," Winkelmann said. "I like to take the pressure off and make something fine and stupid."

They're created on his flatscreen computer with a balcony view of a palmetto tree. Then, you look down and see a cluster of cables running into the bathroom, where his computers, each decked out with multiple video graphics cards, are cooled by an industrial fan.

What started out as drawings and then turned into more abstract, futuristic renderings, has evolved into poignant political and pop culture commentary.

Celebrities and politicians, from Kanye West to Kim Jong-un, are focal points of many of his pieces, depicted in often crude and horrific ways to make a statement.

"You probably can't print that," he suggests, scrolling past a depiction of Michael Jackson as a robot with tubes coming out of his chest.

"You definitely can't print that," he adds of a gory scene involving Baby Yoda brains and entrails.

Some are more wholesome — like a rendering of giant Ocean Spray cranberry juice bottles and skateboarders after a viral TikTok video or an image of Daft Punk after it was announced the Parisian pop duo was officially calling it quits on Feb. 22.

He's also snuck in multiple references to Hot Pockets on some particularly disturbing and dystopian images.

"It's become a running joke that I'm trying to be a reverse influencer, like I get a brand to pay me not to tag them in posts," he said, jokingly. "I even messaged them and said, 'Please don't sue me.' "

In addition to his everydays, Winkelmann's art and video work has been used at two Super Bowls, at Justin Bieber and Nicki Minaj concerts, on the cover of Imagine Dragons' last two albums and even in a Louis Vuitton runway show.

He didn't believe his artwork had been truly used by the fashion designer until he attended the show at the Louvre (in a Zara suit his wife made him buy) before eating hors d'oeuvres off the same table as Spike Lee at the after party.

"I didn't know they were doing it, I didn't believe it," said Winkelmann. "I mean putting a robot on a $5,000 women’s dress, what does that even mean?"

Though he is humorously self-deprecating, Winkelmann does want to show the world that digital art is a medium worth paying attention to and paying for. He's investing a lot of the money he's made so far back into his art to try and take it to new levels.

"I know how many digital artists have been making this work for the last 20 years," Winkelmann said. "Literally tens if not hundreds of thousands of digital artists are out there, and I want to represent our community in a good light and show how much thought, hard work, craftsmanship and social responsibility this community has."

On Feb. 24, after being interviewed by The New York Times and filmed for a documentary out of Los Angeles, Winkelmann got giddy with anticipation for the next day's auction launch.

Sitting on his desk, beside a mostly empty mug of coffee and can of Mountain Dew, is a copy of "Ways of Curating" by Hans Ulrich Obrist. The 2014 catalogue salvages the word "curate" from its saturated use in wine stores and regarding Spotify playlists to remind us of the power inherent in looking at art — and the world — in a new way.

Winkelmann has done just that, every day, for 13 years. Now, the world is starting to look at his art, and the digital art realm as a whole, in a new way.